Pack It In, Packraft It Out

September’s equinox moon blotted my calendar like a deadline. The twilight of seasons had stirred up an urgency to satiate summer’s wanderlust; my mind and body itched for more sun, more miles, more waves. Like any worthwhile finale, I wanted mine to be grand.

I grew up exploring the terrain surrounding my hometown. My family has always been a pack of land animals—hiking, biking, skiing—and I’m just beginning to decipher the rhythms of river life. However, joining the NRS family has widened my perspective. As I stared at the two empty, adjacent squares on my calendar, a smile grew when I considered that land and water activities don’t have to be mutually exclusive. The NRS PackRaft had been teasing my imagination ever since I laid eyes on it, but now the hook was set.

Schemes and questions alike unfolded as I scanned a topo map of the familiar Snake River Trail segment winding upriver from Pittsburg Landing to Kirkwood Ranch in Hells Canyon. How well would I be able to scout the river from the trail? What conditions could I predict this late in the summer? How many rattlesnakes would I have to stare down? How thick would the poison ivy and cacti patches be? Had the creek crossings dried up? Could I even convince anyone else to buddy up on this fool’s errand?

By the Friday evening before Saturday’s pre-dawn departure, I had recruited my good friend Stephen to run the river with me. We wrestled new backpack configurations to accommodate the packrafts, four-piece Werner paddles, PFDs, and HydroSkin for the river. The bundles weighed in under ten pounds each but displaced about half of our packs’ volume. My wife Rachel and I have refined a few methods of divvying up our tandem gear, but this new twist complicated the equation. She had agreed to backpack both ways as long as she didn’t have to hike back alone, so we recruited two other friends as well. We finally settled on an acceptable arrangement and quickly dozed off.

After a few hours’ sleep, Stephen pulled up in his Subaru with Jen, Anna, and their gear. We finished the game of Gear Tetris and squeezed in, double-fisting coffee and breakfast burritos. The dimness gave way to an overcast sky as we ambled along Highway 95 south. Parked at the trailhead by 9am, we took a moment to soak in the wild sunflower perfume and cathedral views of the corridor, then shouldered and belted our packs for the half-day hike. 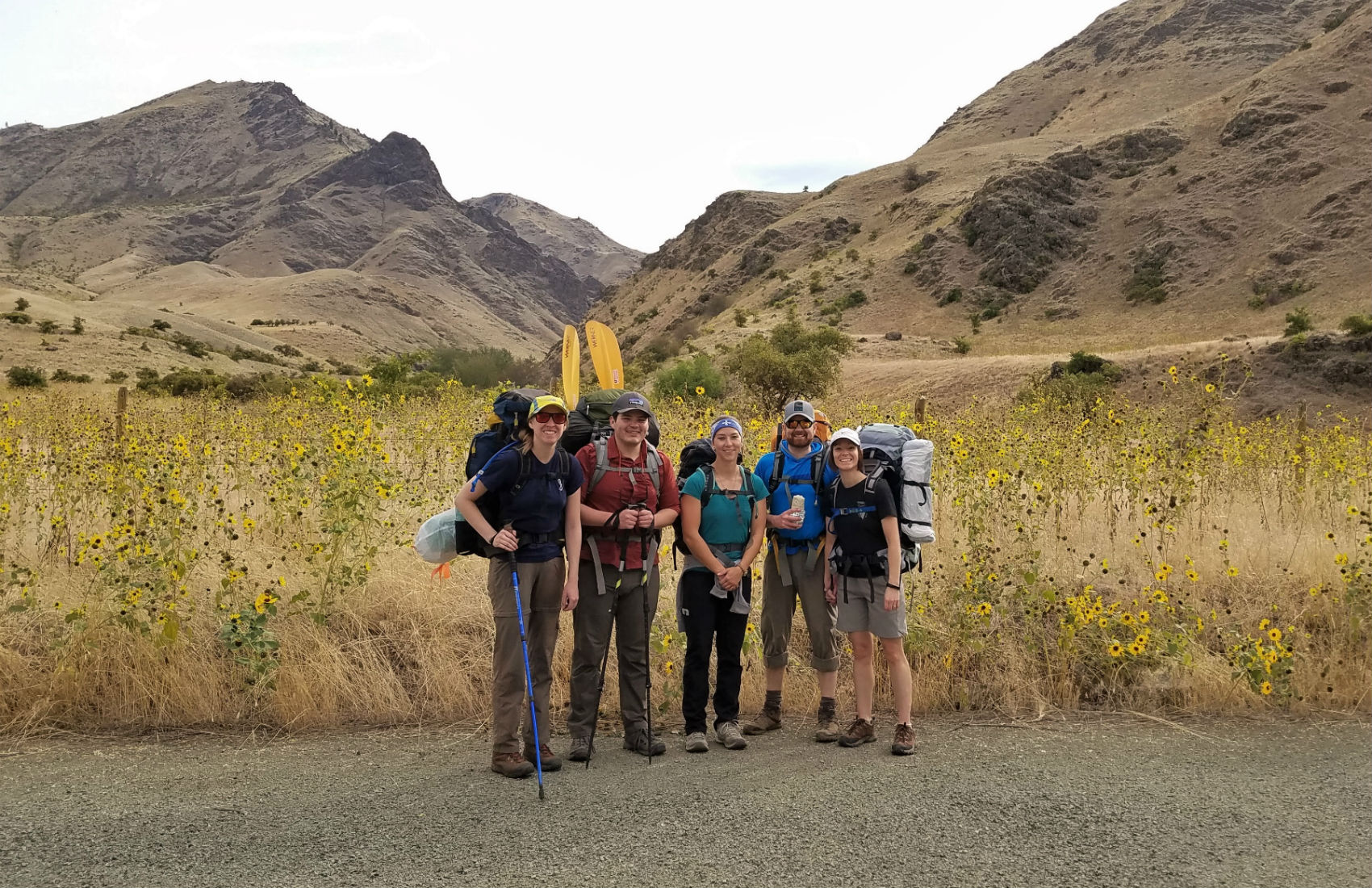 The trail deteriorated quickly into a thin, rocky footpath overgrown with crackling grasses, spiny cacti, and ominous poison ivy. In contrast to the smooth, wide river below, our trail contorted over, under, and around the topography of the canyon’s eastern wall. A few inconspicuous rattlesnakes punctuated our trek with adrenaline-pumping surprise.

Stephen and I did our best to scout the river features we could see from our eagle-eye viewpoints, but much of the river was hidden below the cliffs. The stoke-meter amped up when we spotted two other packrafters down below!

We descended the steep last half mile into Kirkwood Ranch eager to stake our tents and unpack lunch before the flotillas of rafters could beat us to it. The property surrounding the log cabin museum offered rewarding bounties of wild fruit and manicured lawns for yoga and naps. Rejuvenated and unburdened, we jaunted out on an afternoon hike to Suicide Point. The day’s last surprise—a portly skunk—sniffed his way into camp as we started cooking dinner. 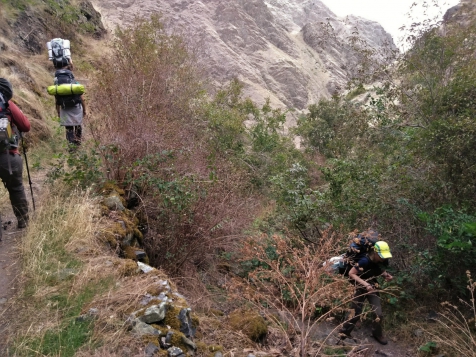 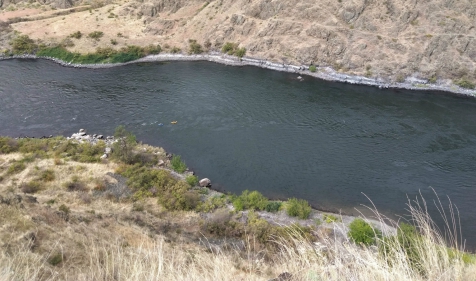 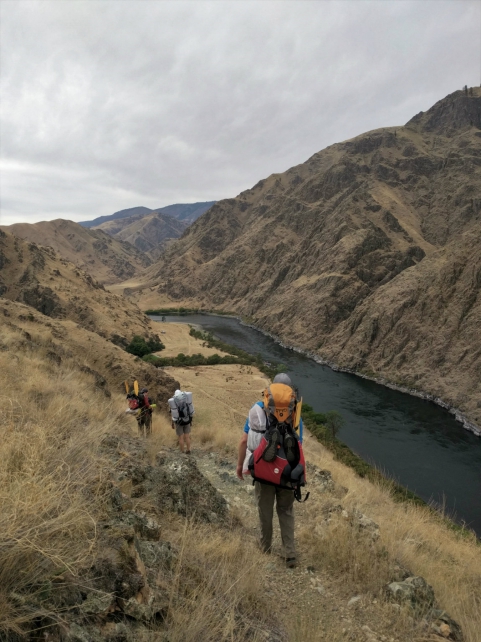 Crisp blue skies greeted us on Sunday morning. We brewed our coffee, sliced up some wild Italian prunes for our oatmeal, then gave the ladies a 90-minute head start for the return stint. If our timing was right, they would have prime vantage points for taking some photo and video of our float. Stephen and I unrolled the packrafts and set out the other river gear.

To save space and weight, the packraft is primarily inflated with a “fill bag,” essentially a nylon pillowcase with a hose on one end. The seat pad and main floor have small valves that only allow for lung-powered inflation. A few curious multi-day raft-campers couldn’t help but investigate the unusual scene. We dry bagged our gear, rigged it to the bow of the tiny vessels, asked the rafters to snap a few photos, then let the Snake River draw us in. 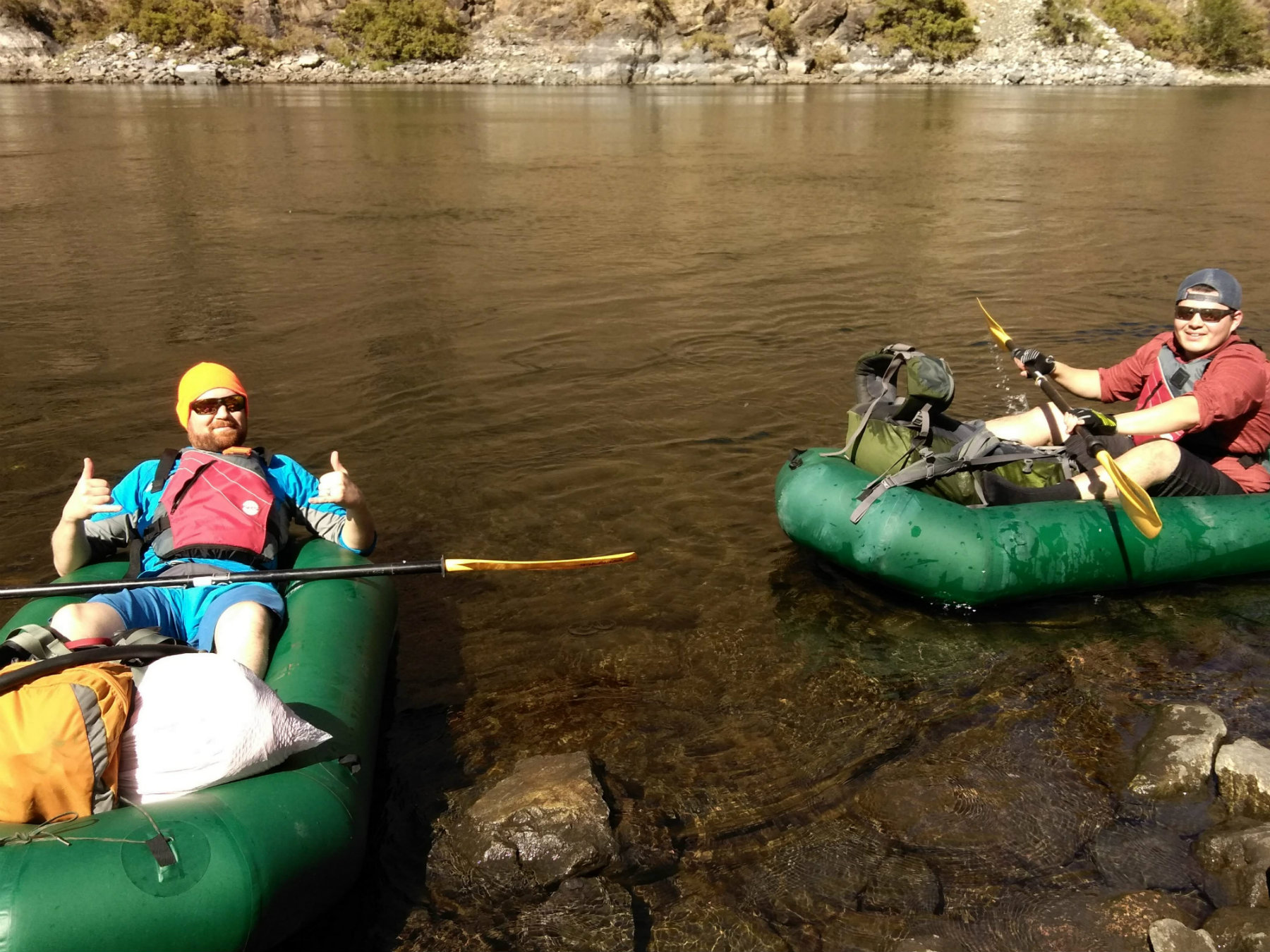 We launched from Kirkwood Ranch into a calm stretch of the river, which gave us ample time to adjust our cargo and settle into the crafts’ confines. I wedged my feet between the sides of my backpack and the urethane tubes, took a long pull from my hydration pack, shifted my grip on the paddle, and started watching and listening for the rush of waves ahead. Our hike had only revealed two significant features, but we had to assume there would be others in the blind spots hidden below the bluffs.

We were also on high alert for a hazard of another sort—jet boats. We had lost count of them buzzing the canyon the day before but kept a close eye when they crossed paths with the occasional raft. It turned out to be a coin toss whether they would cut their wake politely or plow ahead with blinders on. We had navigated a few interchanges safely enough in the early flats, but as we drifted into our first major wave train, a mechanized whine cutting up from below the rapids put me on edge. I began paddling hard to river-left, eddying out of the tongue after a few initial waves. Stephen had dropped in ahead of me, and I could only pray he had taken evasive maneuvers as well. 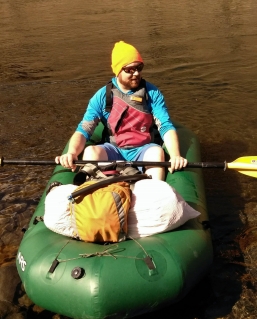 I exhaled an “Amen!” as Stephen exited the rapids at a safe distance from the boat. After it charged up the center, I paddled back in to catch most of the action for myself. My packed gear in the bow turned out to be a necessary counterbalance as I undulated through the whitewater. Catching up with each other below, our jubilant shouts were unexpectedly joined by our landlocked ladies up above, who had caught it all on video. We joked that Stephen’s nickname for this rapid on the hike in was “The Storm,” which may or may not have jinxed us.

To give the girls time to cover more ground, we shored up for a break farther down, bailed out the boats and dug for the dried fruit, jerky, and string cheese in our packs. We chatted excitedly about the next big set still waiting for us. “Gutterball Rapids,” as we had dubbed them, ran strong against the western bank. And although we had given the hikers ample time to prepare for our next big photo op, turns out, the vantage point wasn’t quite as close as we had hoped. Regardless, we bombed through the wave set, the small rafts dropping us deep into a couple greenrooms in the series. Another round of raucous cheers echoed down from the granite perch above as we raised our paddles victoriously. 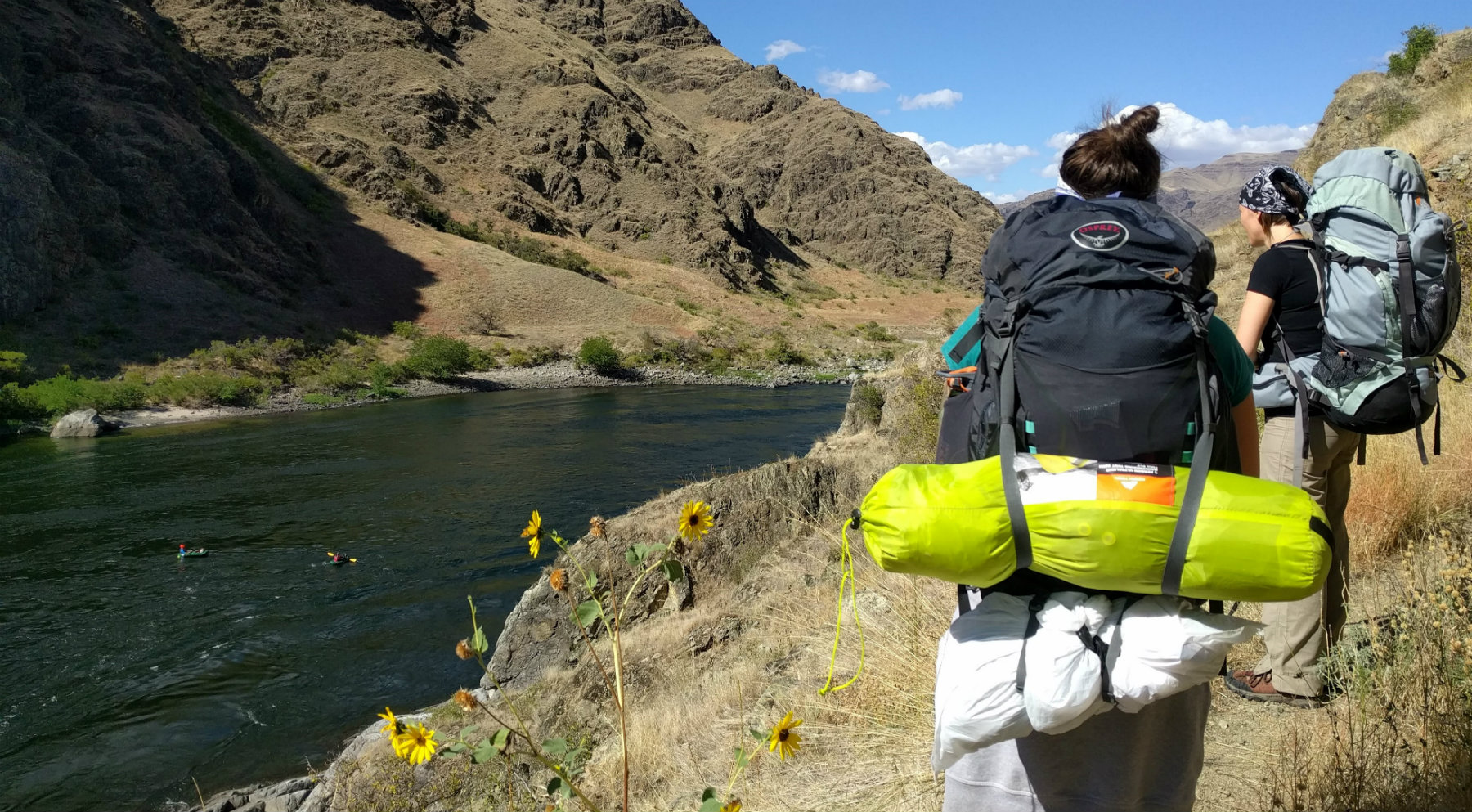 Time had moved differently on the river, as it always does. We had shoved off from camp less than two hours before we lazily drifted around the final bend before Pittsburg; what felt like a full day’s adventure also seemed to end in the blink of an eye. We pulled the packrafts out of the water for the last time, laying our dripping things out to start sun-drying while Rachel, Jen, and Anna finished the hike and brought the car down from the trailhead. They recounted their perspectives of our journey with a twinge of jealousy, and we smugly confirmed that floating the cool waters beat bushwhacking past vindictive foliage and venomous reptiles any day! We repeated the stuff-the-Subaru game and our chatter quickly turned to the greasy burgers and frosty pints waiting for us over the ridge in Whitebird.

My first round with the packraft had been a thrilling success; I’m already scanning my calendar for blank spots, daydreaming about my next opportunity to pack it in and packraft it out! 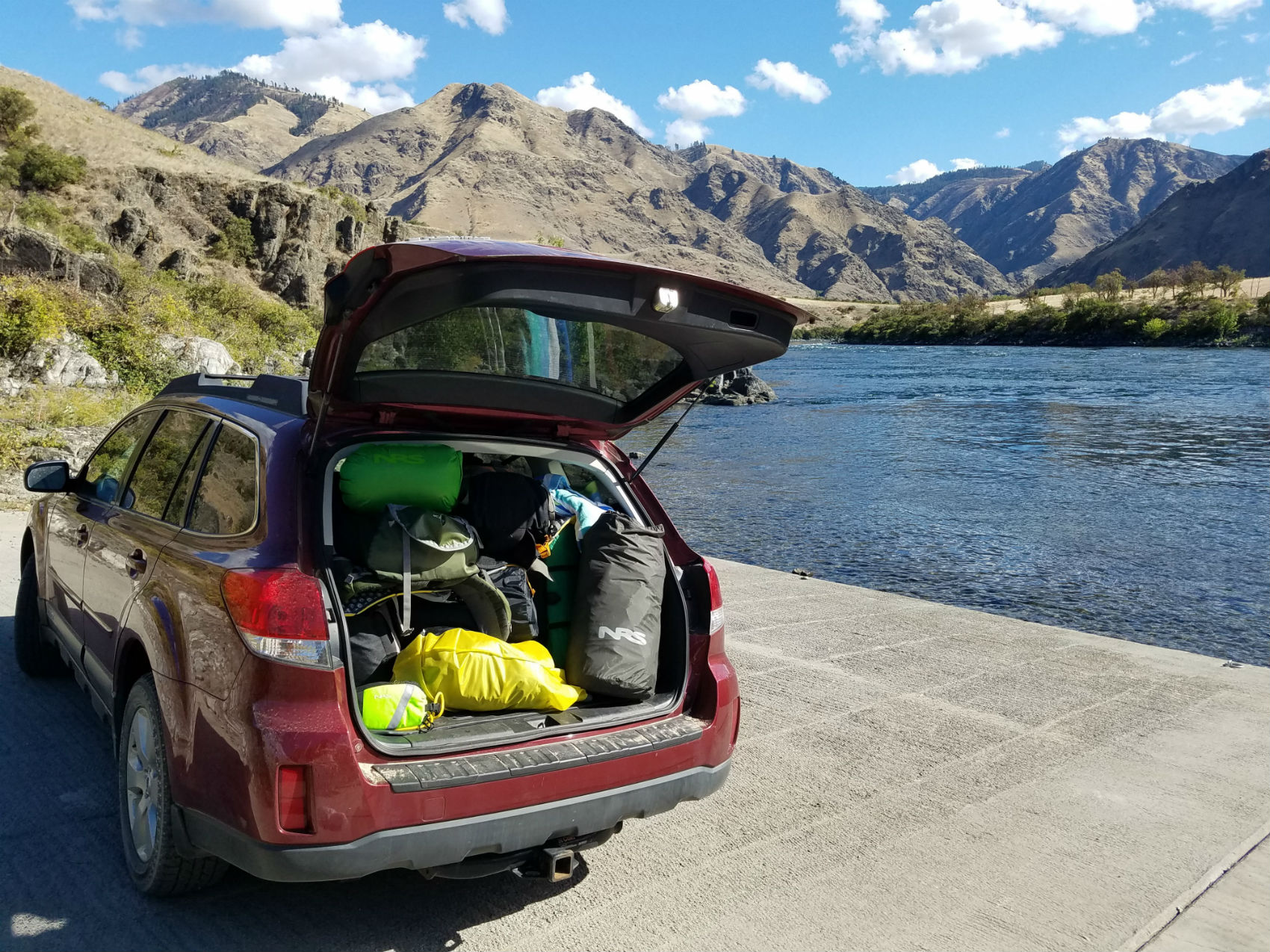 Editor’s Note: Guest contributor Chris Otto joined NRS in 2016, bringing with him professional experience in Customer Service, an academic background in International Studies at the University of Idaho, and personal enthusiasm for outdoor recreation as a world-traveling Idaho native. Photos by Chris & Rachel Otto, Stephen Goodwin and Jen Smith.