Make Your Own Adventure on the John Wesley Powell Route

In the second week of August 1869, John Wesley Powell and his crew of eight—down one man who departed after the Canyon of Lodore—camped for a few days at the Little Colorado River. Today, this tributary in the Grand Canyon is best known for summer rafters who swim through turquoise waters when the creek is low. But during Powell’s expedition, the monsoon was in full effect and the LCR was running high and brown.

Over the past 80 days, the expedition had descended nearly 700 miles on the Green and Colorado Rivers. Their goal was to explore the last blank spot on the American map—primarily the course of the Colorado River through little-known Grand Canyon. For the task, Powell had brought in by railroad four wooden Whitehall rowboats. Long and narrow with tapering keels under bow and stern, to say these boats were less-than-ideal is a major understatement. In rapids, they could barely turn.

Already, the men had destroyed one boat in Disaster Falls. Other times, they swamped, flipped, and swam. They frequently lost oars and made new ones from driftwood. While they ran many smaller rapids, they spent grueling hours portaging or lining around larger rapids, which today are navigated regularly with modern equipment (and occasional carnage). Meanwhile, the rations diminished at an alarming rate as they spoiled from the constant wetting. 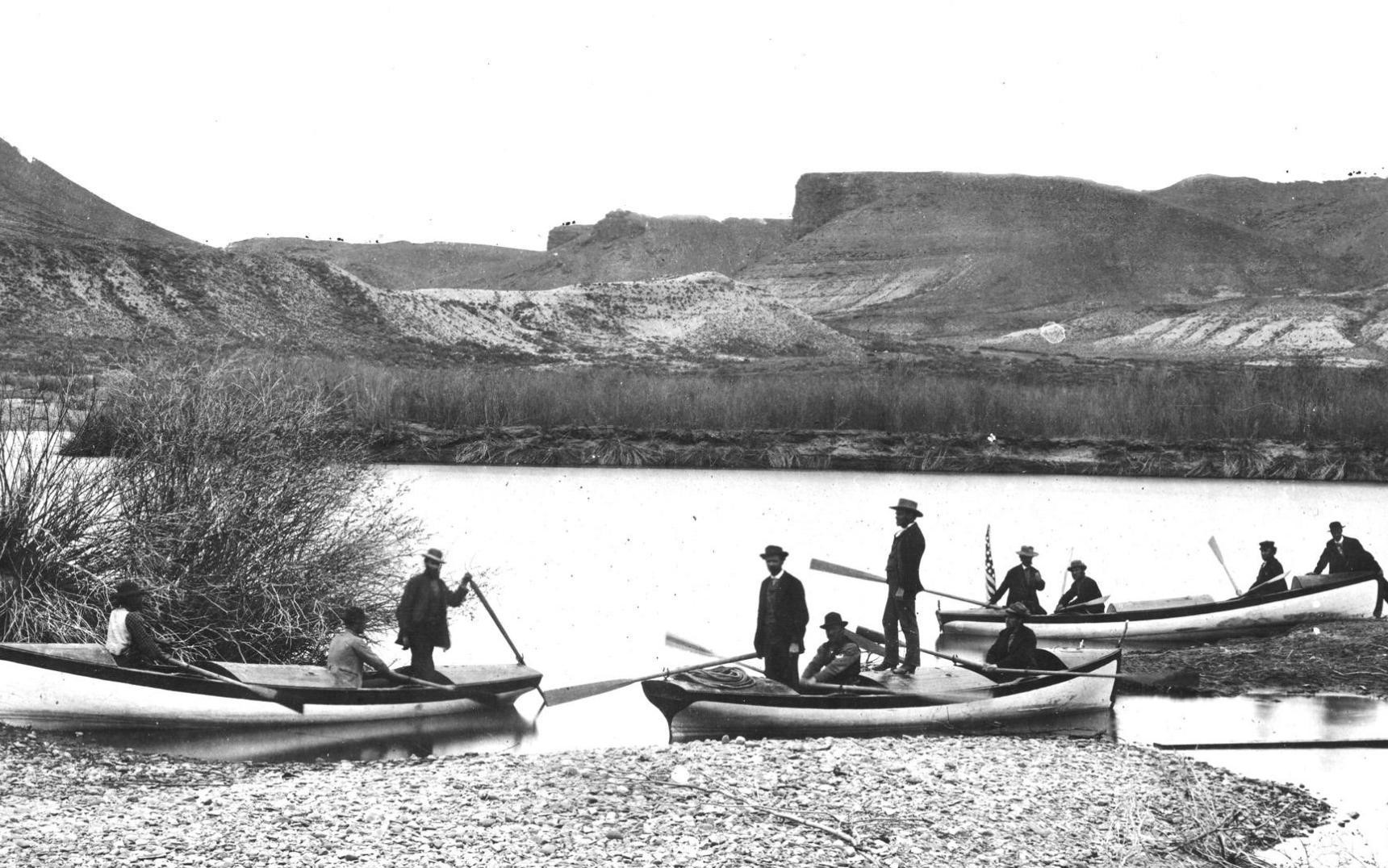 This was how the nine men found themselves at the LCR in August 1869. Fending off starvation with meager servings of sour biscuits and dried apples. About to embark in three boats down what Powell later called The Great Unknown. Today, river runners typically describe this same trip as The Trip of a Lifetime.

The men correctly suspected this would be the wildest and hardest whitewater they’d yet encountered. Meanwhile, they pondered the story of James White, who in 1851 infamously claimed to have floated through the entire Grand Canyon while tied by a rope to a hastily-built log raft. In fact, they didn’t just ponder White’s mostly dismissed story, they hoped it was true. Because if White had survived, that meant they all might make it out alive. 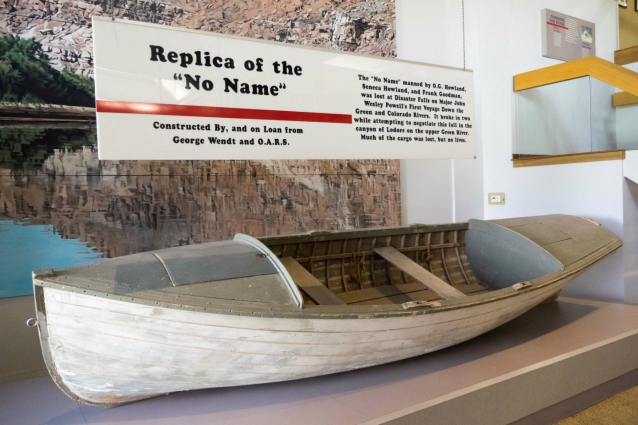 A replica of the boats used on the original JWP expedition. 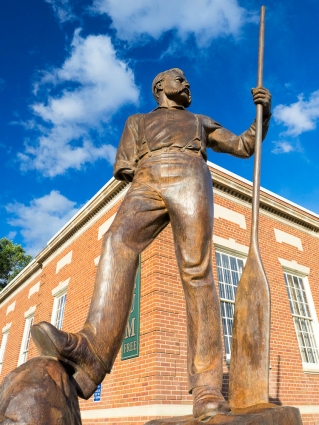 Twenty days later, only six men in two boats emerged from the Grand Wash Cliffs. And what happened during their expedition quickly became the stuff of legend. After experiencing distracting hunger, exhausting portages, and terrifying whitewater, the three missing men had hiked out near what today is called Separation Rapid, about 14 miles below Diamond Creek. These men were never seen again, presumed killed by either Shivwits tribesmen or Mormon militiamen.

The remaining six men exited the canyon a few days later. In most regards, that first expedition was a failure. The instruments were destroyed. The observations and maps were either lost or incomplete. What survived were some remarkable personal journals and the knowledge that the route could be descended by boats—just with great difficulty and an insane amount of portaging. Sound like fun? Okay, let’s go!

Well, that’s kind of what happened. Though not in great numbers at first. In From Powell to Power (an excellent book edited by Tom Martin) river historian Dock Marston reports that by 1950 only around 100 individuals in small groups had boated through the Grand Canyon. The first to return was Powell, with a more methodical scientific expedition that involved a new crew and plenty of land-based surveying. But due to high water (at one point they were bailing with a tea kettle and, eventually, their hats), they abandoned the boats and hiked out at Kanab Creek. Nearly 20 years passed before the next disastrous expedition was launched in hopes of building a railroad through the Grand Canyon.

Meanwhile, on the northern half of the route in the Uinta Basin, Nathaniel Galloway is credited with developing modern rowing techniques. Using a flat-bottomed boat, he turned around to face forward while rowing through rapids. A few years later, he and a friend descended the entire route, reading original expedition accounts along the way. In the early 20th century, sporadic rowing parties continued, including another trip by Galloway. In 1911 came the Kolb brothers, photographers who had established a studio on the south rim of Grand Canyon, and who also joined a USGS survey trip in 1923.

Five years later, Glen and Bessie Hyde tackled the lower two-thirds of the route for their honeymoon. In Green River, Utah, Glen built a 20-foot wooden sweep scow of the type he used on the Salmon River, back home in Idaho. With a flat bottom and sweep oars mounted fore and aft, boats of this type are still popular in Idaho today. Had the Hydes succeeded, Bessie would have become the first woman to run the entire river through Grand Canyon. Sadly, the couple disappeared. During a search, the Kolb brothers found their empty boat floating mysteriously in an eddy just below Mile 232 rapid, which today is called Killer Fang Falls.

Launching in September 1938, a French trio were likely the first kayakers to attempt the upper route. Bernard and Genevieve LeColmont and Antoine DeSeyne started from Green River, Wyoming and paddled all the way to Lees Ferry. They ended their trip there, on November 9th, due to the river icing over. 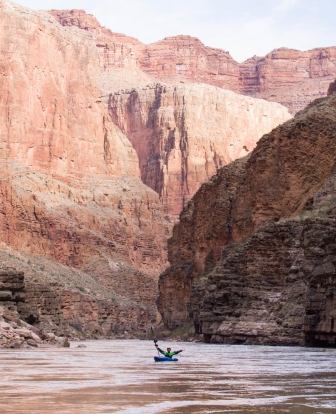 This first kayakers descended the Grand Canyon in 1938. Today, kayakers are self-supporting every season. 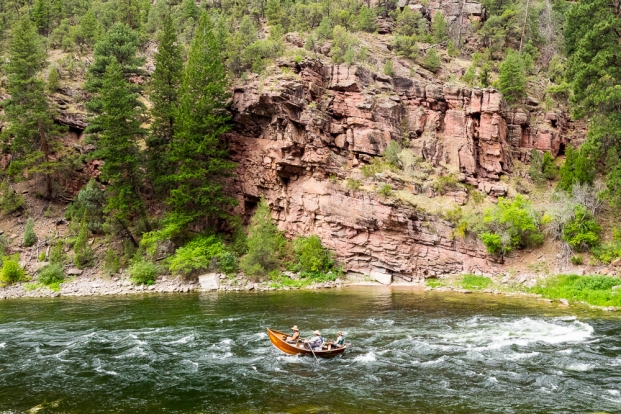 Dories first appeared on the Colorado in the late 50s.

In 1937, 28-year-old Buzz Holstrom rowed the first solo descent of the entire route. A year later came the first descent in a rubber raft, named Charlie, which the John Wesley Powell River History Museum in Green River, Utah is now restoring. Amos Burg, a journalist who had convinced Holstrom to re-create his solo trip for the sake of documentation, captained Charlie. Interest in river running seems to have diminished during the years of World War II, but afterward, surplus rubber rafts began to appear more frequently. Around 1949, the first motorized runs through Grand Canyon began. Modern whitewater dories descended in the decade following.

Precise boating evolutions along the route in recent years are more numerous and harder to classify. Eventually, fiberglass kayaks appeared, followed by inflatable kayaks and plastic boats. In 2001, three members of the women’s U.S. whitewater rafting team, Kelley Kalafatich, Julie Munger, and Rebecca Rusch, secured a special permit to run the Grand Canyon on riverboards. And the first SUP descent of a 187-mile section of Grand Canyon came in 2008 by Hawaiian surfer Archie Kalepa. Since that time, others have paddleboarded the entire canyon and even SUP self-supported.

Other developments over the years have included packrafting, self-support kayaking from source-to-sea, and one time a pair of dirtbags even illegally swam. In 1955, two army buddies didn’t have money for a boat so, yeah, they just swam the entire Grand Canyon. It took 26 days, beat the heck out of them, but they made it. Which brings us back to James White’s claim about using a bunch of logs. Sure, if two guys swam through, perhaps it is possible to make it through the Grand Canyon on a log raft.

But the particulars of White’s story—which were possibly manipulated by his advocates for political and financial reasons—suggest he didn’t do it at all. Principally, White claimed he floated all the way on the Colorado River from the mouth of the San Juan River to the mouth of the Virgin. A distance of about 500 river miles. In 14 days. So low on food, he said for seven days he ate only two rawhide knife sheaths. While a log-raft re-enactment to test this far-fetched theory does sound like a fun idea, think twice. Glen Canyon dam blocks the way. Plus, the park service will take your logs away.

Today, the John Wesley Powell Route is a very different place than it was 150 years ago. It spans 1,000 miles of rivers and reservoirs across the desert southwest. Various agencies, including the National Park Service, U.S. Forest Service, Bureau of Land Management, and Native American reservations, protect vast segments of the route. Three major dams have flooded about 40% of the route, drowning some remarkable sections of river but creating ample reservoir opportunities for open-minded paddlers willing to give them a chance.

On the remaining river segments, tens of thousands of boaters annually descend many beloved and permitted sections, some requiring advance lottery applications. Meanwhile, plenty of other sections remain unpermitted or require easy self-issue permits, while other worthy sections are rarely paddled and seem almost forgotten. The result is a ton of excellent paddling opportunities existing within a complex network of interwoven agencies, regulations and access points. 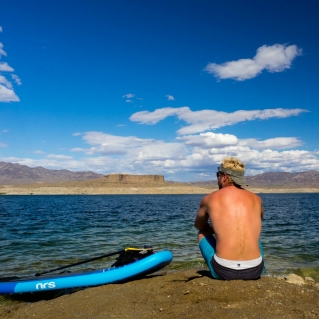 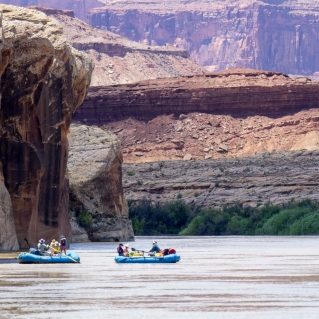 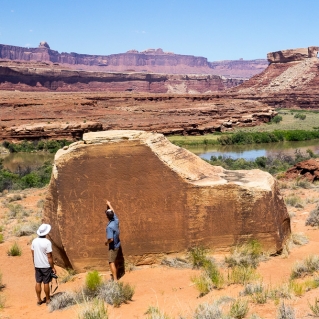 Just below the town of Green River, Wyoming, where Powell and crew began on May 24, 1869, there are maybe ten miles of river which give way to another 80 miles of remote lake paddling in Flaming Gorge N.R.A. Named for the first major canyon the expedition encountered (and named), Flaming Gorge Reservoir offers plenty of access points for short and long trips.

Below Flaming Gorge Dam, a few sections of class II whitewater through the ridiculously scenic Red Canyon are perfect for everything from kayaking to paddleboarding to multi-day rafting. Lazy sections flowing through Browns Park and Ouray National Wildlife Refuge are great for family float trips. The lofty heights of Lodore, Whirlpool, and Split Mountain Canyons, through Dinosaur National Monument, sum up to possibly the best four-day class III multiday trip along the entire route. (But put on your permit glasses!) While downstream, the Uinta Basin is practically a forgotten segment of the Green River, offering a hundred miles of low bluffs and lazy river perfect for a self-support in touring kayaks. 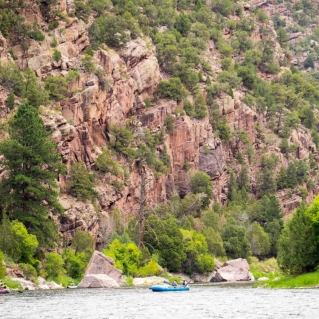 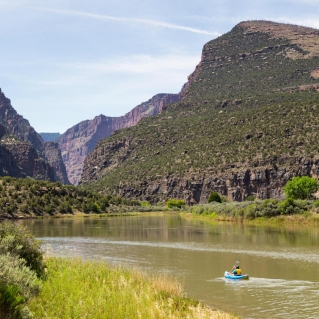 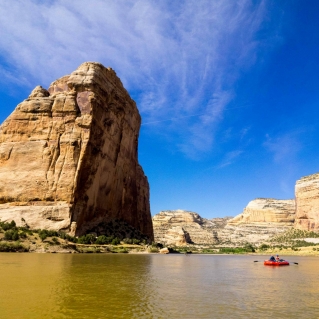 Desolation and Gray Canyons provide an 86-mile class II-III trip with plenty of ruins and pictographs, first through a barren desert landscape, then a hidden red-walled canyon, and finally through a stark but sporty gorge. Labyrinth and Stillwater are two flatwater canyons each offering three-four day trips through the canyonlands region, perfect for a long-weekend canoe trip or a week-long expedition.

Below the confluence with the Colorado River is the foreboding Cataract Canyon. Which, even after Lake Powell flooded the lower rapids, still rumbles with class III-IV rapids (IV+ at high water). And despite controversies regarding Glen Canyon Dam, the reservoir itself offers many paddling options, from countless side canyons to through-paddling the 150-mile length. Plus, there’s a single remaining section of Colorado River flowing through Glen Canyon, the 15 miles just below the dam. 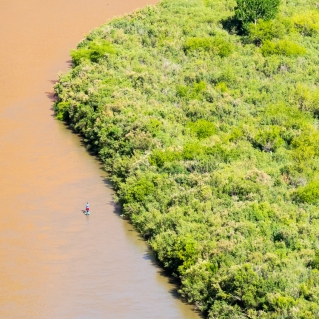 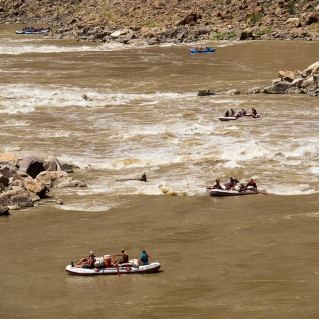 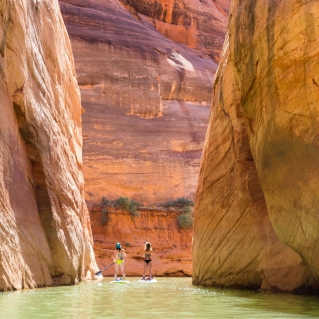 And all of this brings us back to the Grand Canyon. Starting from Lees Ferry, most trips take a few weeks and stop after 225 miles at Diamond Creek. Below, there’s another 15 miles or so of river and another 40 across Lake Mead to Pearce Ferry. Yes, for many river runners the canyon is their favorite section along the John Wesley Powell route. How could it not be? It’s the trip of a lifetime. But considering the 200 miles of river above the official start of the JWP expedition, there’s so much more upstream from the canyon that’s well worth exploring. And with more river past the canyon, let’s just call it about 1600 miles of paddling on the Green and Colorado Rivers. With something for all abilities and time frames, waiting for whatever boat you float.