Scattered foliage of yellow and orange, languishing remnants of a subdued fall radiate from the gray forest like hot embers among old coals. Despite it being a cloudy, mid-November day, my buddy, Rob, and I are sweating as we haul gear and rafts to an access beach for the Chattooga River, located along the northern border of Georgia and South Carolina.

Rob has been guiding on this river for years, but today he seems a little apprehensive as I help him rig a 12-foot raft with a frame and oars. Since paddle rafting is the preferred style in the southeast, this will be his first time rowing the Chattooga or anything smaller than the Grand Canyon, and he professes a fear of skewering himself with an oar. “I don’t want to become a Shish-Ka-Rob,” he muses, emphasizing the pun. 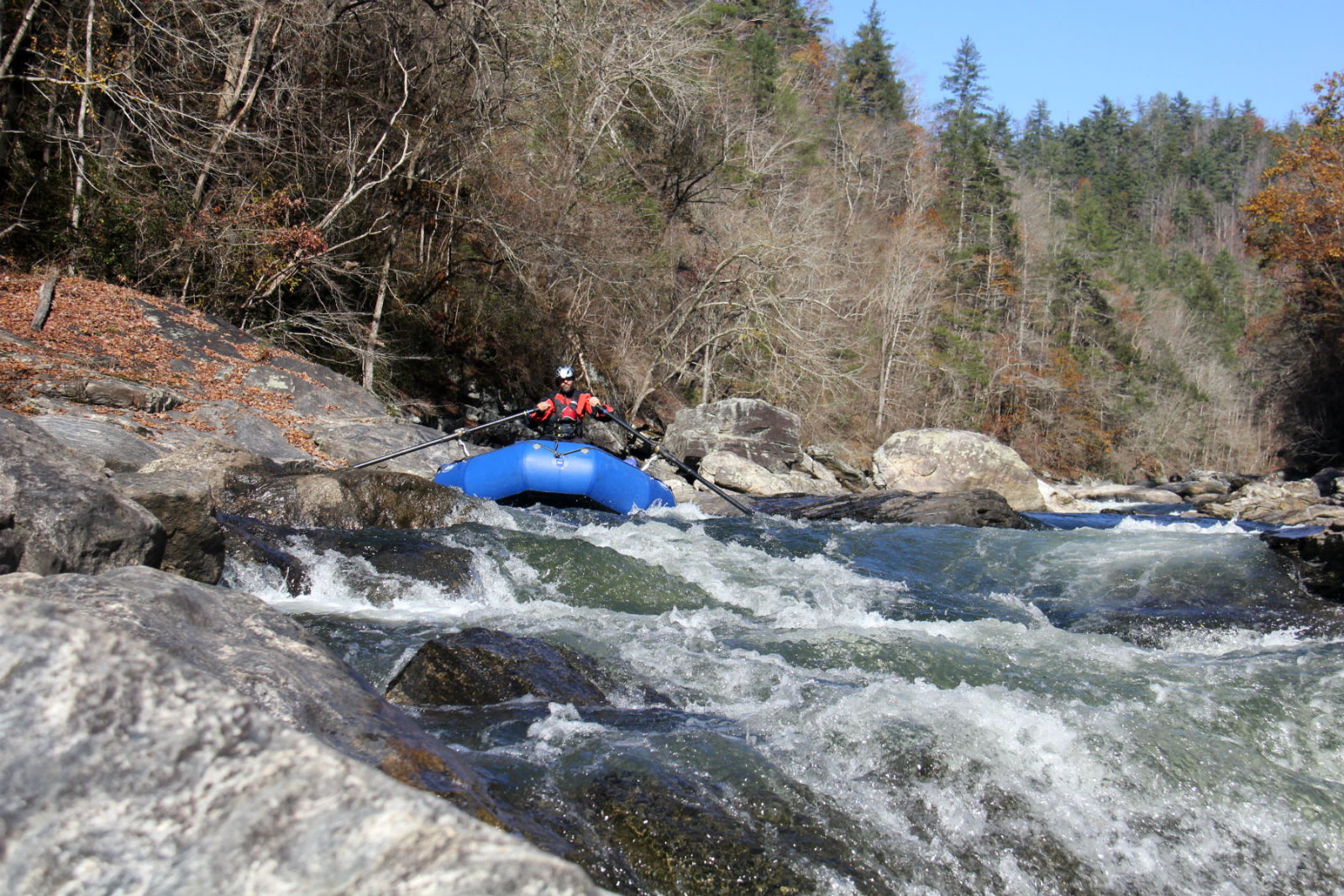 I laugh and give Rob some words of encouragement, though I too have the nervous excitement associated with trying a new boat. As I was leaving my summer job in Oregon last season, I dropped by the NRS headquarters in Idaho to pick up a demo 14-foot Outlaw raft for the winter. The Outlaw series is designed with the private boater in mind. They come in three different sizes: 12, 13, and 14-foot lengths, and cost about half as much as comparable commercial-grade rafts. Since arriving back in the Southeast, I have taken the Outlaw 140 on a couple of day trips and was impressed with its agility. However, after spending my summer rowing 16-foot gear boats on multiday trips, any empty 14-footer seems sporty. So this weekend will be the first true test for the raft, as I try to row it through technical rapids and steep class IV drops loaded with camping supplies. 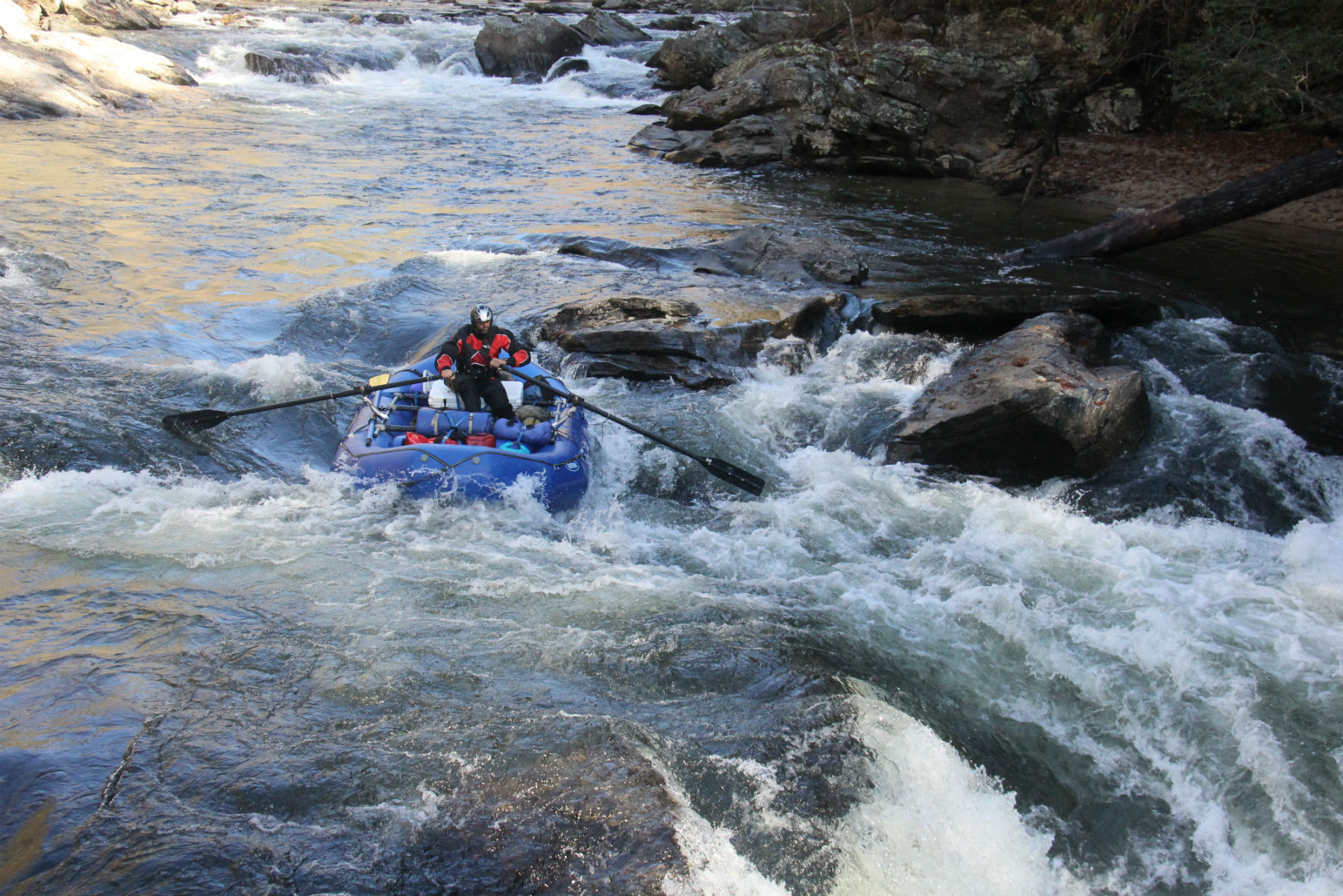 But despite all the gear, rigging the Outlaw proves no problem due to thwarts that can be removed using the NRS BAT (Batten Attachment Thwart) system. This makes the Outlaw easy to transform from a paddle raft into an oar boat. The system is simple to use as long as you remember to soften the tubes and deflate the thwarts before trying to work the plastic batten in or out of the sleeves.

Though fall can be a dry time of year for the southeast, the Chattooga received good rain over the summer. Rob and I are looking at a medium-low water level for the weekend, with the river running just over 500 cfs. This is the level when commercial rafting companies start switching to smaller rafts and lighter loads. Although some of the shoals will be a bit of a challenge, I’m not worried about the river being too low. The Outlaw’s 21-inch tubes keep the weight riding high, while giving it the floatation needed to take on much higher volume whitewater than we will see this weekend. And the tough rubber skid plates located on the bottom four corners of the floor provide it with extra protection from rocks. 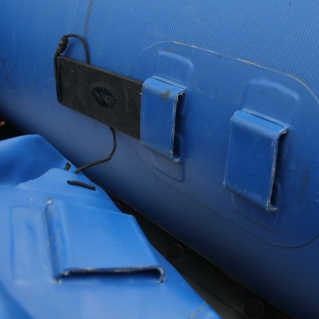 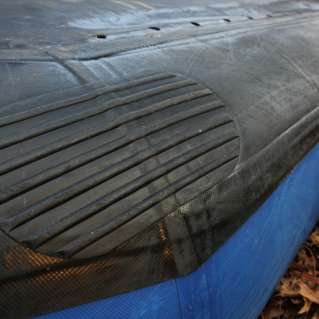 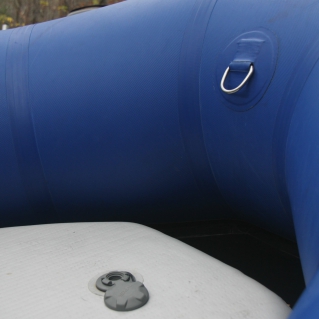 After a couple miles of warm-up we come to Woodall Shoals, which is a nasty hydraulic, followed by a long class III rapid. The Outlaw cuts through the complex entrance, punches the weak point of the hole with ease, and glides over the shallow run out zone without slowing down.

Part of the reason the Outlaw is so apt at handling technical water is its unique two-piece floor design. The exterior floor is welded onto the tubes. The interior floor is a drop stitch platform, constructed in a similar manner as inflatable SUPs, and secures to the outer floor using the same BAT system as the thwarts. If you deflate the floor, you can peel it back to access the eight attachment points, enabling it to be pulled out for cleaning and repair. This is advantageous, especially in the bony waters of the southeast, because if the Outlaw runs over a sharp rock, there’s a chance it will only tear the outside floor, sparing the parts that inflate.

As Rob and I near Seven-Foot Falls, we stop to enjoy a small surf wave. Even with a moderate load in my boat, I am able to push out of the eddy and onto the trough of the wave, bow surfing back and forth with little effort. At the falls, the Outlaw has another great line, barely grazing the rock wall at the bottom. 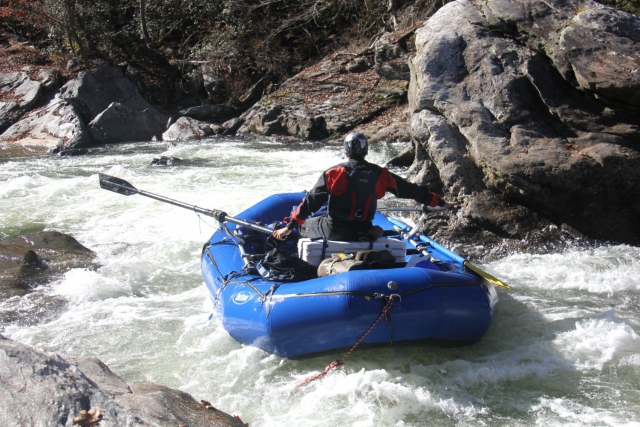 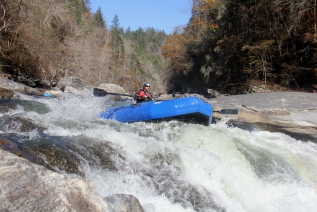 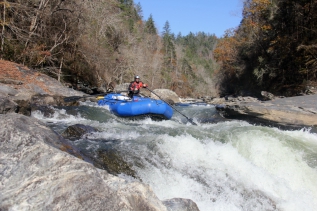 Around the corner, Rob and I pause to do some fishing along a sharp bend in the river. Another advantage of the drop stitch floor is that when fully inflated, it offers a rigid platform for casting. I’m able to stand firm and concentrate on my technique without having to compensate for the wobbly feeling one gets with I-Beam floors. Now if the Outlaw could only pick a fly, roll a cast, and call in trout like the Pavlovian dinner bell, it would be the perfect fishing raft.

After half an hour of catching only leaves, we pack up our rods and head to camp. Beer, bourbon and stories about past trips and old friends carry us late into the night. A light rain comes and goes, but by the time we head to our tents, I look up to see a river of stars flowing through the narrow corridor of sky above. 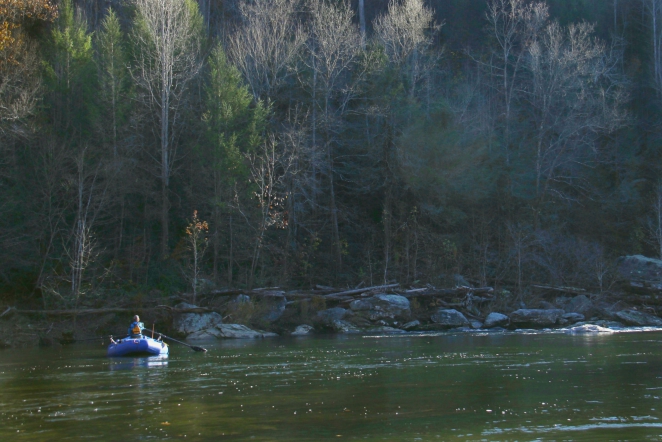 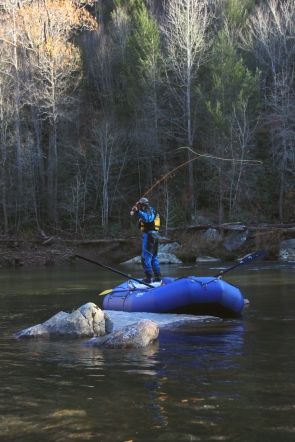 The next day we enter the Five Falls, a series of rapids where the river drops 75-feet within a quarter of a mile. The Outlaw performs well in these rapids, picking its way through convoluted rock gardens and holding its course in swirly water. The last one, Sock-Em-Dog, is the hardest rapid for an oar rig. Yet, with the Outlaw I’m able to drive it through the tight approach with the speed of a paddle raft and lock it in the currents that line me up for the drop.

And this is what impresses me most about the Outlaw—the way it tracks. The floor on most I-Beam rafts draft at around the same depth as the outside tubes. When using such rafts in technical water, there’s a fine line between getting enough of the raft across an eddy line to pull it in a desired direction but not getting so much of the eddy that the bow gets turned upstream. Also, traditional self-bailers are vulnerable to being knocked off course by small diagonal waves. But the Outlaw is built more like a bucket boat, with the floor suspended a couple of inches above the outer edges. This feature enables it to bite eddy lines and slice through waves, giving you the ability to navigate rapids with both speed and precision. 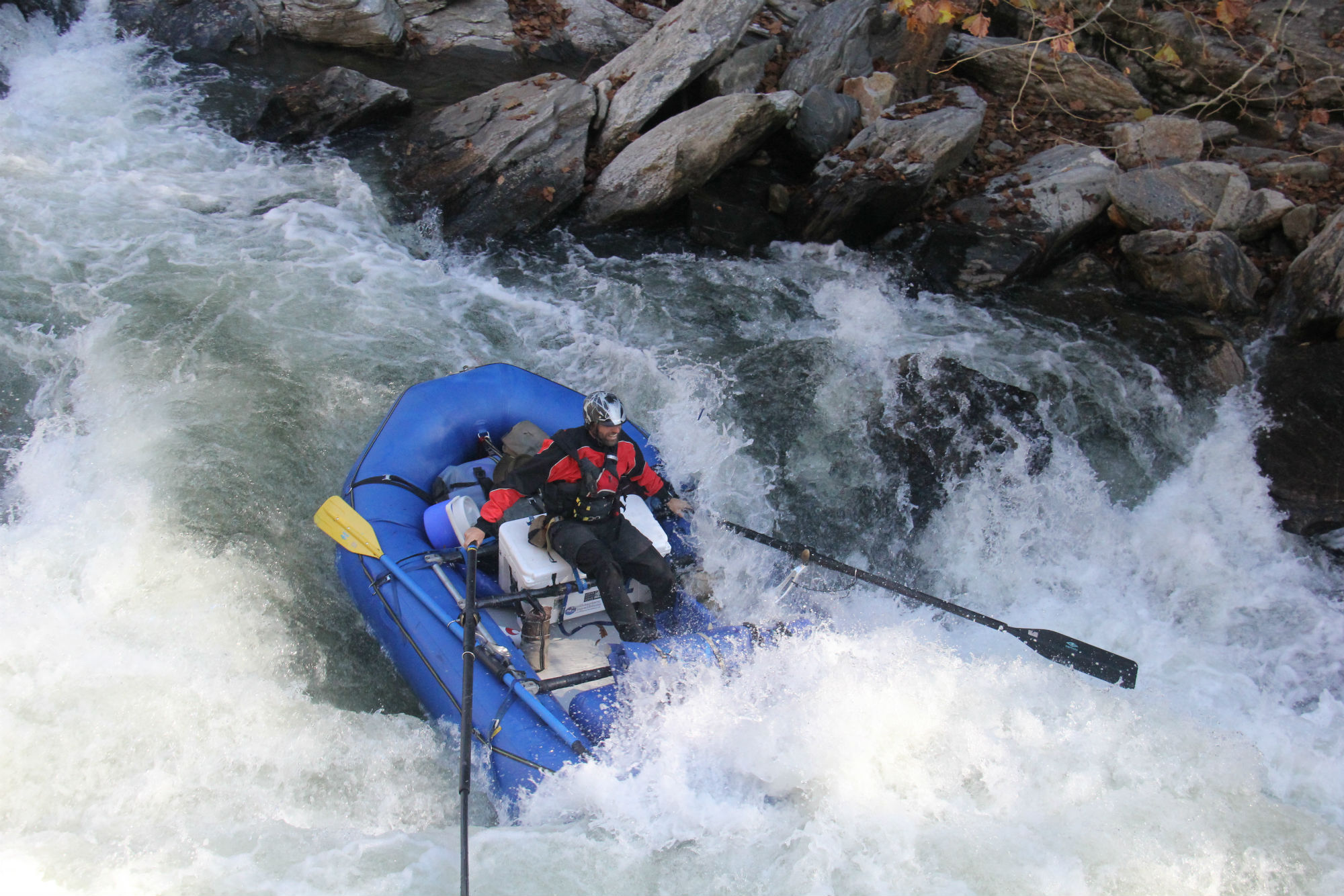 With the biggest rapids behind us, Rob and I do a little more fishing and even trade rafts for a spell, reaching the takeout just as the sun dips into the trees. Then comes the long process of unloading gear and cleaning out the rafts. One thing to note about the Outlaw’s design, there is a risk of trash, debris, and small gear lodging in between the layers of the floor. I’ve seen inflatable kayaks with a similar floor system get loaded down with sand after being tied up along a beach in a turbulent eddy. But this should not be a big issue as long as you’re mindful of it, clean out between the floor layers after trips on silt-laden rivers and avoid letting empty beer cans roam around the bottom of the raft. 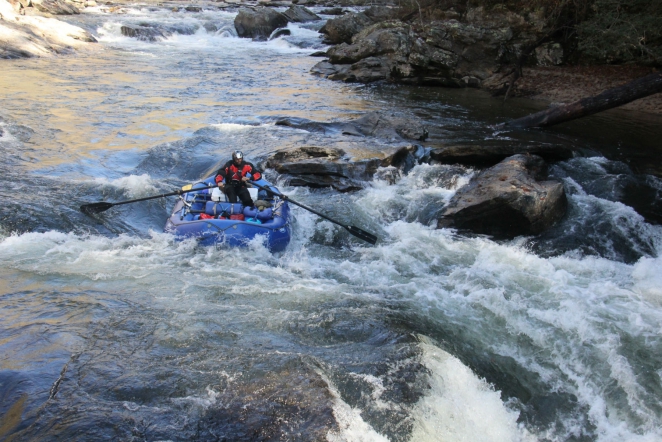 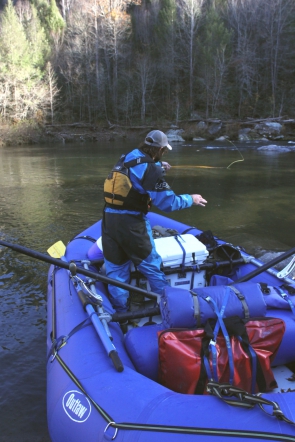 As Rob and I derig the gear and load the truck, we verbally rerun the river, talking about all the fun that made the trip worth the work. And that’s the great thing about going down familiar waterways in different kinds of boats, it allows us new ways to challenge our skills and gives us a better appreciation of the river’s character. I’m sure this won’t be the last time Rob takes an oar rig down the Chattooga, and this will certainly not be my last trip in the Outlaw 140.