When I began raft guiding, senior staff had one rule about drysuits: you couldn’t wear one unless you were 30. No exception. Spring on the Ottawa River is cold. River-icebergs kind of cold. A drysuit is a valuable piece of gear. But summers on the Ottawa meant warm air and warm water, so it just wasn’t cost-effective for warm water guides to invest in a drysuit, because let’s be real drysuits are expensive, and raft guide wages don’t really condone these kinds of luxurious comforts.

Instead, each guide—from rookies to decade veterans—developed their own layering system using any combination of wool, polypro or neoprene. Neoprene-clad guides gave the rookies who showed up in drysuits such a hard time on the river, they eventually hung it up and hopped into wetsuits like the rest of us. Which sometimes required boiling water to soften our frozen farmer john in the morning. 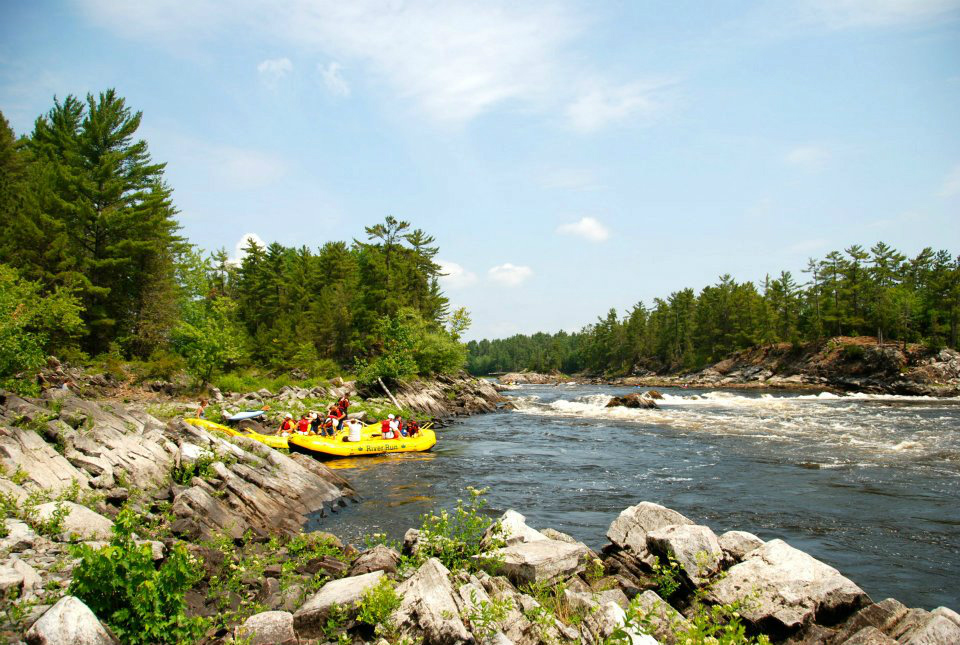 It’s been over six years since I guided a commercial raft and moved out of my raft guide home in a broken-down bus. I realized I had unintentionally stuck to the River Run drysuit rule when I hit 30 (just last year) and bought my first drysuit. Spending my first day in a happysuit, I mean drysuit, was a day of blissful glee (and warmth).

Knowing the discomfort of pulling on cold, wet gear made each day in my bright green Pivot drysuit so sweet. Like I earned it. I wore my NRS drysuit every day for a month while taking part in Balkan Rivers Tour 2 (BRT) last year. From portaging around dams to protesting in the streets, there were times where I felt like a superhero in that lime suit. 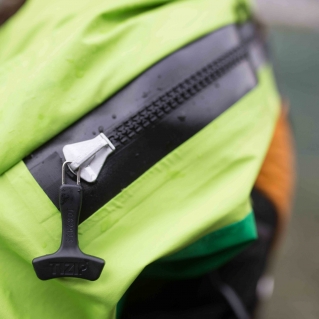 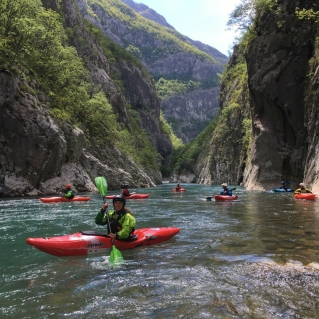 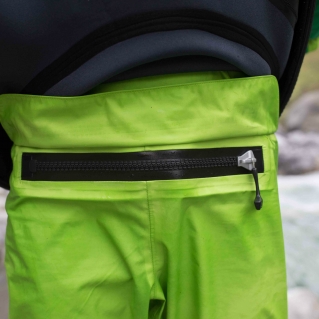 I chose the unisex Pivot drysuit for the backzip entry but, during long days on the river with BRT, I questioned the trade-off of the men’s relief zipper. I grew tired of using a shewee, water bottle or having to completely undress when nature called. When the women’s Pivot came out, I was keen to trade in my ‘super hero second skin’ for a bright blue ‘happy suit.’

Scrolling through the sizing chart online with a tape measure tangled around me, I realized I wasn’t going to fit into the fixed dimensions of the women’s sizes. After a quick phone call to NRS headquarters in Idaho, we decided to create a franken-suit, made specifically for me. My ectomorph body could stretch out in a lady’s large and the NRS repair team offered to glue in size small gaskets (the large is stocked with medium gaskets). Since they do all the repairs in house, this simply meant that my happysuit went to repairs before going to shipping. No time lost. It’s like having a make-your-own-happysuit option and anyone can do it. 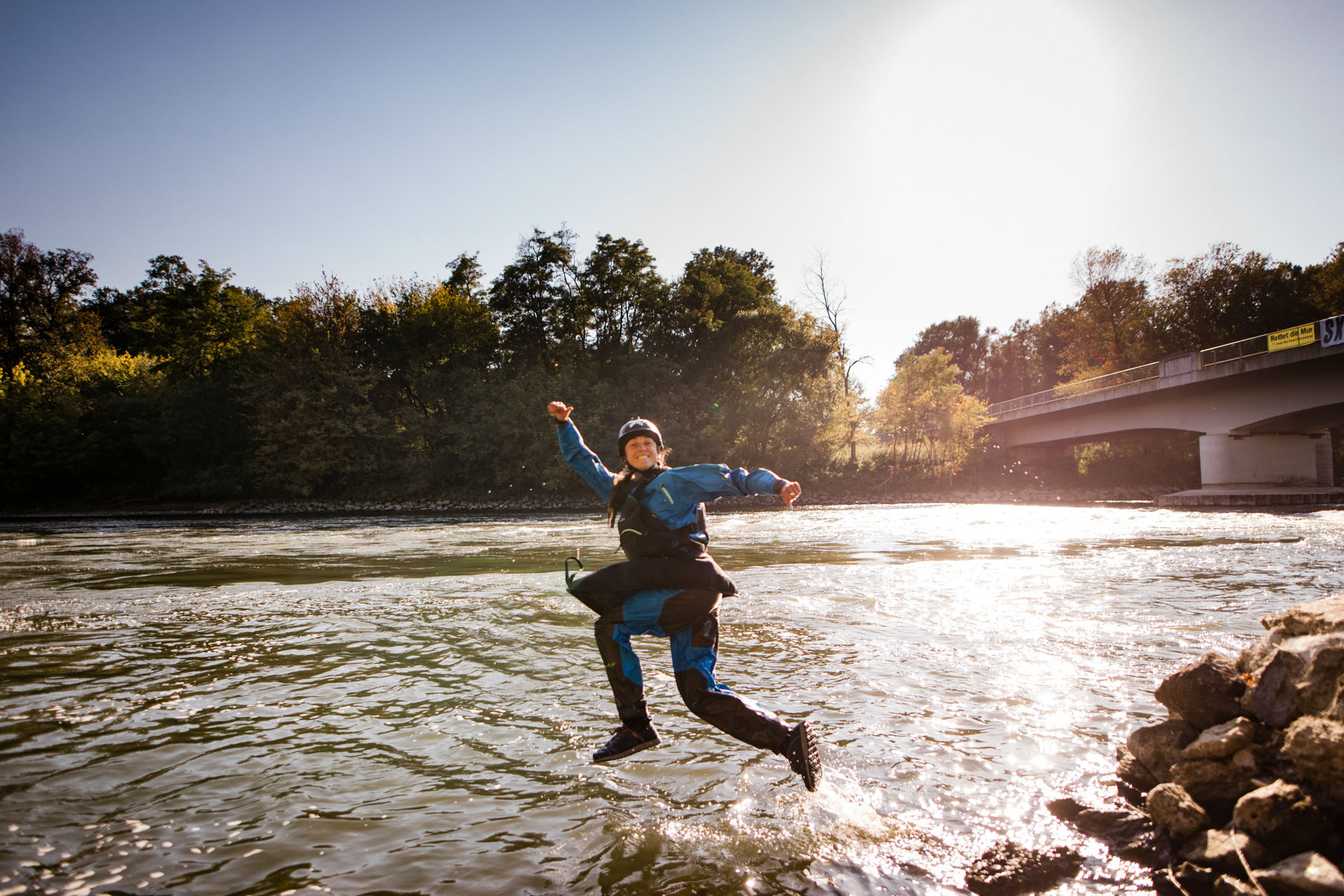 During this year’s Balkan Rivers Tour, I reveled in the relief that came with having a ladies-specific drysuit. Literally. With the drop seat, I no longer had to limit the number of pee stops by keeping count of my water (and beer) consumption. With its roomy cut, I had lots of room in the Pivot to climb in and out of my boat, but not so much extra material that it hindered swimming or hustling a shuttle run. I can do a pretty good riverside happy dance in my Pivot and…even moon my friends from across the river! Guys can’t do that in their drysuit, can they?

The velcro leg cuff straps let me synch my pant legs as desired to make portaging streamline, and the reinforced knees let me climb around on rocks worry-free. I can get in and out of the suit on my own with the smooth backzip and I get a great seal around my skirt using the thick hook-and-loop waistband. Win. Win. Winning. 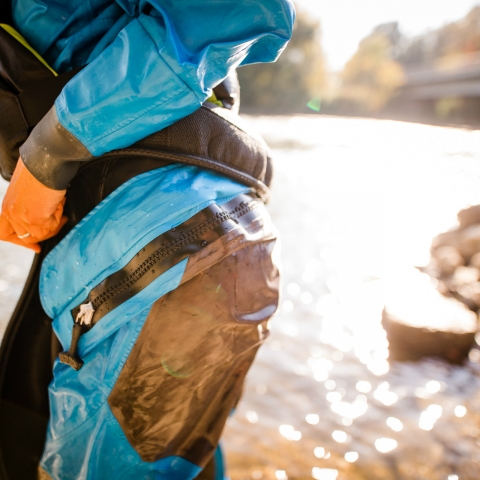 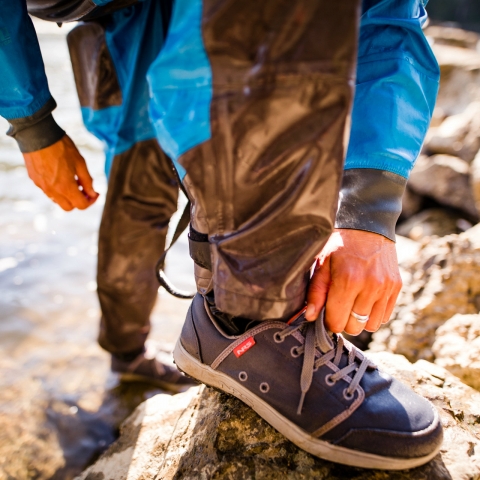 It may be a rainy and cold November morning, but I’m bouncing around in rubber boots and light thermals, excited to hop into my happysuit and hit the river. From the takeout, I head straight to the bar in dry tights and a cozy thermal. And there is no boiling water when I want to get back on the water the next morning. Just jump in. Zip up. Smile. 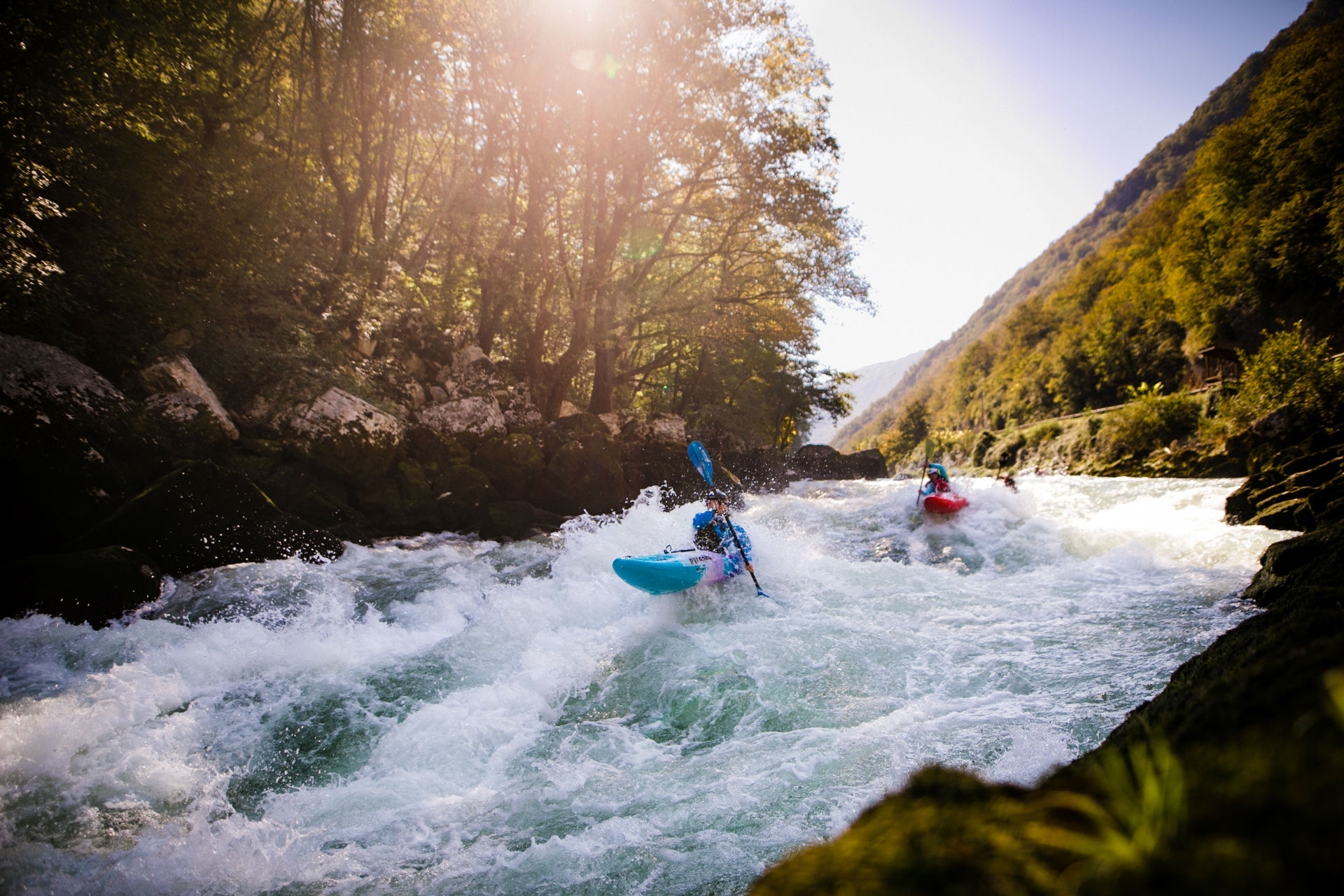