Fishing the Unknowns of Caddo Lake

I had recently returned from four months in Guanaja, Honduras, where I managed a saltwater fly-fishing lodge. My buddy, Shannon had just wrapped up filming episodes in a remote location for one of the outdoor TV series he produces. He wanted to plan a quick getaway and proposed an idea for a camping and fly-fishing trip on Caddo Lake.

Caddo Lake straddles the Northern tip of the Texas-Louisiana border, with 25,400 acres of breathtaking terrain comprised of open water, flooded timber swamps, and wetland marsh. Home to thousands of species of wildlife, it’s a hub of biodiversity. The lake is named after the confederacy of several Southeastern Native American tribes called the Caddoans or Caddo for short. They historically inhabited much of what is now East Texas, Louisiana, and smaller portions of Arkansas and Oklahoma. 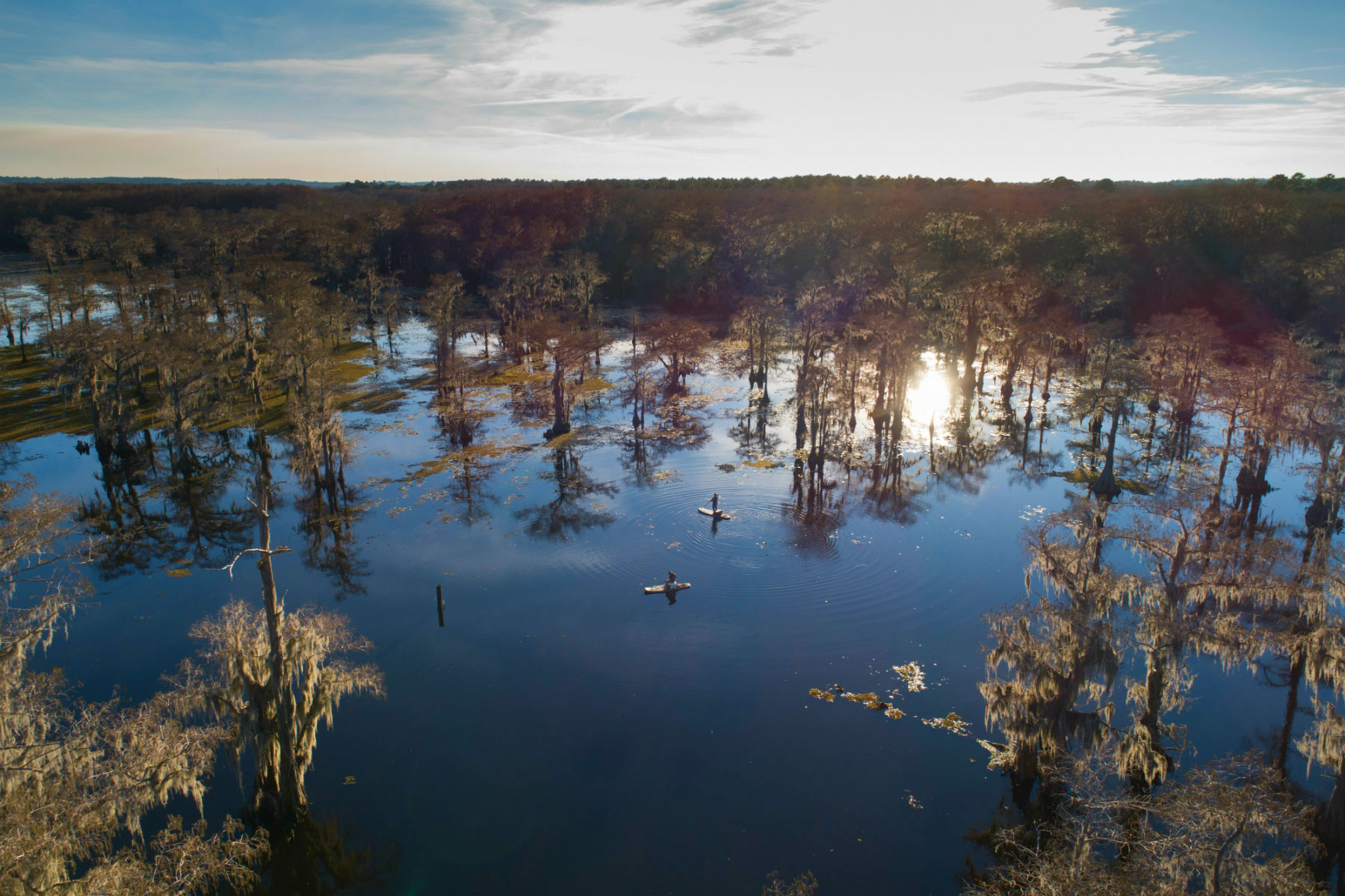 Historians trace prominent Native American inhabitance on the lake back for thousands of years, ending with their forced removal in the mid 19th century. Steamboat ports for a growing logging industry followed and continued up until the early 1900s. In 1910, the Gulf Refining Company completed the first over-water oil platform. Drilling on and around the lake continued into the mid-1930s until richer reserves were found elsewhere. Today, through newfound consciousness of its ecological value, conservation efforts have preserved the vast lake to exist as a wildlife refuge containing one of the largest flooded cypress forests in North America.

I wanted in. That was a no brainer. But how would we navigate the waterways? Did I need to fix the trailer to haul my 1993, 17-foot aluminum body Bass Tracker 314 miles from Austin to the boat launch? Would we take canoes? An airboat? It sounded like reaching the Texas wildlife management area location of our prospective camp would be no easy task considering the dense forest, stumps, deadfall, and submerged vegetation we had read about. But Shannon had the perfect answer for all of my concerns—NRS standup paddleboards.

We set a prospective date. Invited two other friends—Noah, who was then wrapping up a season guiding fly-fishing anglers on the Zhuponova River in Kamchatka, Russia, and Heather, Shannon’s assistant producer. Caddo Lake could certainly provide elements the four of us were drawn to: fly fishing, primitive camping and friends seeking comfort in the unknown. 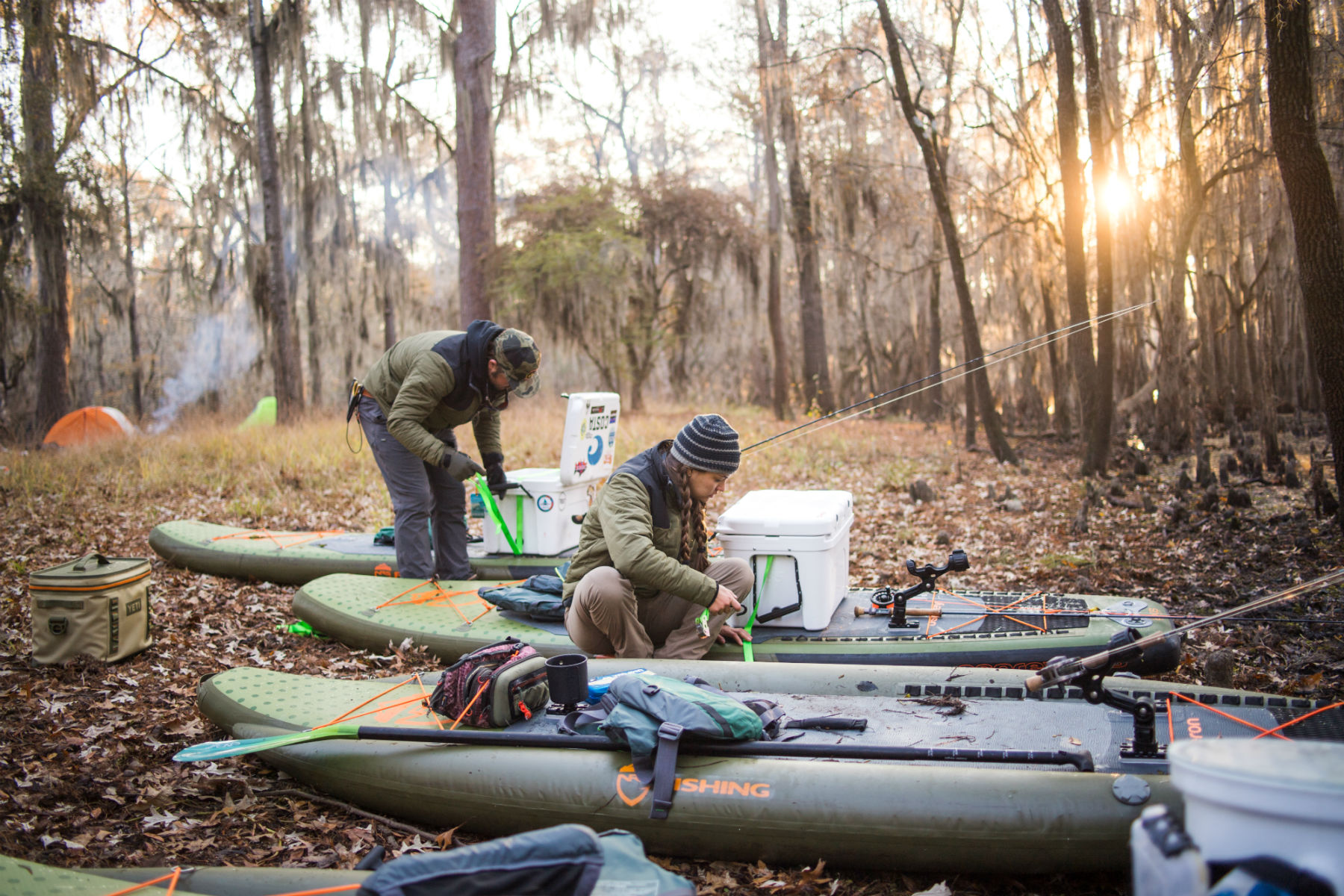 The four of us met at a grocery store parking lot around midnight in early December. Suburban soccer moms pushed shopping carts to their minivans, knocking out some shopping before the store closed. They turned their heads and looked at us with amusement and curiosity.

Tents and camp cookware, YETI coolers, fly-fishing tackle, and a few cameras filled the bed of Shannon’s truck. We stacked the four deflated paddleboards—two Ospreys and two Herons—against the cab. The four of us were able to fit everything we needed for our three-day adventure in one truck. No trailer for a boat, no extended hitch rack for canoes. With excitement and anticipation, we loaded into the truck and began our five-hour drive to Uncertain, Texas.

A molten sun inched above the horizon as we approached Uncertain. Sleep depravity tugged at our eyelids, but as the rough outlines of towering cypress trees along the banks of Caddo Lake were revealed, any thought of sleep dissipated. We passed the “WELCOME TO UNCERTAIN,” sign and moved through the sleepy East Texas waterfront town without causing a stir. 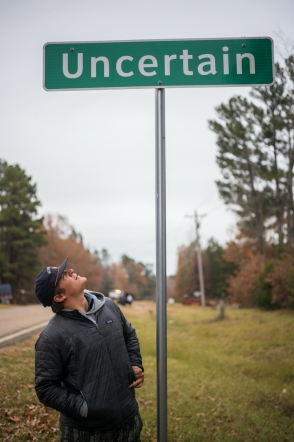 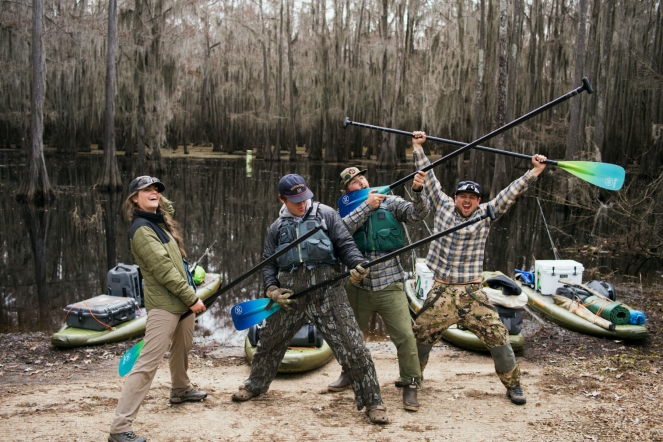 The GPS directed us to drive a few more miles past town until arriving at our boat ramp. The gravel road led to a creamy concrete decline that disappeared into dark shallow water. The only visible clearing in the water led from the ramp to the snaking channel we planned to follow. Other than that, the dense submerged cypress forest blocked views of the lake from every direction. Spanish moss draped the towering cypress timber, its delicate strands swaying gently with the chilling breeze. The view of the new terrain occupied our minds and we stood to observe in silence for just a moment.

Shannon pulled up a satellite image of our campsite, breaking the silence. Much like the boat ramp, could the campsite be underwater too from recent rains? What will we find through those trees? Should we camp elsewhere?

Standing at the entrance to this cypress maze, our thoughts of uncertainty and unease turned into an open discussion about how we should proceed. But there was really only one way to truly know. We started with unpacking our strategically loaded truck and inflating the paddleboards. Though we had a manual pump for our time on the water if temperature change lowered air pressure, we initially used an air compressor hooked up to the battery of the truck. In no time, we rigged our swamp vessels with fishing mounts, paddle clamps and cup holders, loaded down with coolers, dry bags and camping gear and pushed into the water. 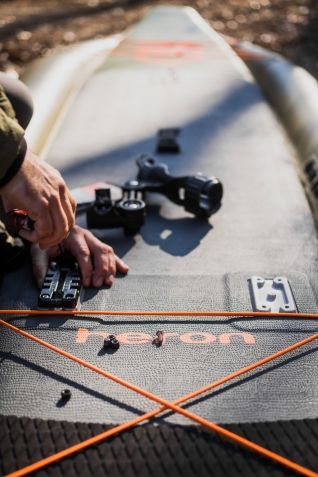 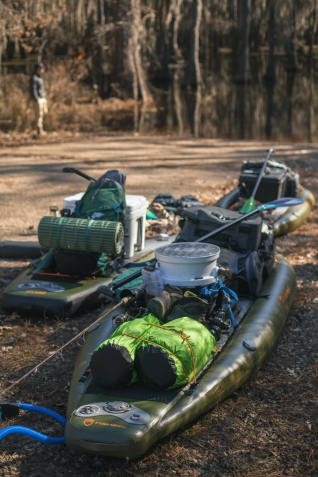 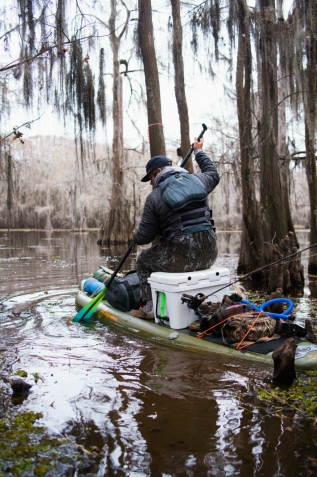 Heather’s board was ready first. Though the board was loaded to the max, two of us could easily carry it down the ramp. Heather slowly paddled into the thick cypress timber. We stood and watched her disappear down the narrow channel in the general direction of camp.

Old Texas license plates nailed to the trees marked the channel. In a single file line, we paddled on with slow caution, ducking limbs and pushing off of exposed roots. We used our paddles to move Spanish moss to the side as we passed and every so often glided into a spot where the sun’s rays reached the water to greet us with warmth.

Eventually, after some double-checking of the maps and continual acknowledgment of just how special this place was, we saw our first patch of dry land in the two miles we had paddled. Along the bank of a small island on the edge of the north finger of the lake, we found our destination. Relief eased our boat-ramp worries. We dragged our paddleboards out of the water and began de-rigging to set up camp. With our tents pitched on a soft mat of fallen pine needles we gathered firewood for the night and selected flies for the first early evening fishing sesh. 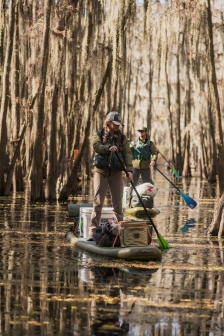 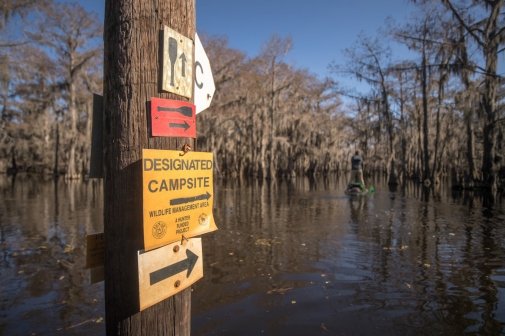 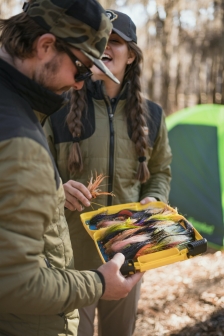 We really had no knowledge of Caddo Lake’s fishery, but we embraced the challenge of fishing new water. It was more enjoyable to be fly-fishing from a vessel like the Osprey and the Heron due to their stability even with the motion of a fly cast and the weight of a YETI cooler as a seat. In comparison to other kayaks, canoes, and self-propelled watercraft, I had never fished with so much ease. Heather and I caught chain pickerel, which was a first for us. I didn’t even realize they were in the lake. Noah and Shannon caught largemouth bass, a species much more up to speed with what we catch back home. In this isolated region of the lake, it’s safe to presume these fish had never seen a fly before, and their healthy condition and beauty was evident in inspection before a speedy release.

When the sun sank low and fell behind the wall of cypress, we paddled back to our camp. Owls began their evening conversations and other nocturnal animals of Caddo Lake made their presence known. Apres dinner small batch bourbon took our fireside conversation into hypothetical dimensions. Someone asked, “If you could go anywhere in time and sit down with one person and do anything with them what would it be?” Heather answered Joan Wulff, a revolutionary for fly-fishing who paved the way for modern anglers. She’s known as the First Lady of Fly Fishing. After a long pause, Noah claimed he would do a bank job with Butch Cassidy and the Sundance Kid. Without a second thought, Shannon said he would test his physical prowess with Sir Ranulph Fiennes, the legendary explorer. I chose to join the great expedition with Lewis and Clark. 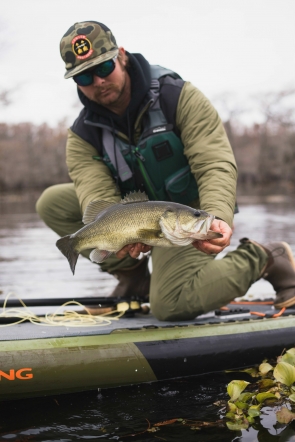 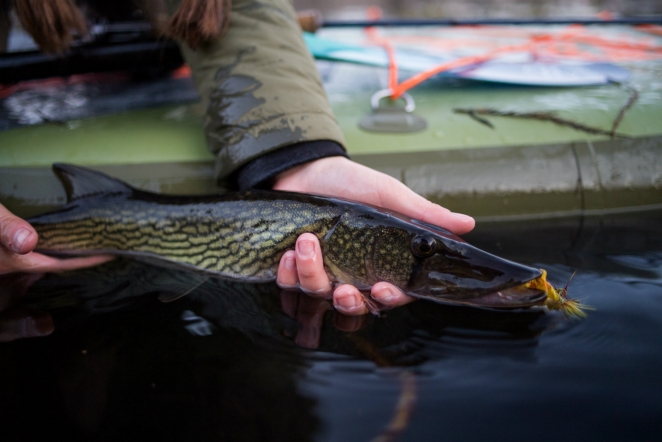 A low milky fog covered the water the next morning, with some flaring points rising several feet into the air like vapor stalagmites. Consumed by the cold chill of the night, we warmed our bones by the fire as breakfast cooked and acknowledged the beauty of the morning.

We shared our thoughts on the odd sounds of the night. The strangest, unrelenting, rhythmic sound, like bongo drums changing in volume, to the most precise beat and cadence, had woken three of us up in the middle of the night. Noah, semi-jokingly, attributed it to a long history of Bigfoot sightings in the area, “It was a Squatch, man,” he said. Shannon and I briefly discussed how it seemed to fade away, only to return louder, maybe even closer. We dismissed it without coming to a conclusion. Heather, knocked out from the day’s paddle, didn’t hear the sounds in her slumber. After breakfast, Noah and Shannon headed out to fish while Heather and I explored the island.

After meeting up for lunch, we decided to all paddle out and cast. This round, we journeyed farther from camp back toward Uncertain, caught a few more bass, and as the sunlight faded, we raced back to our island. 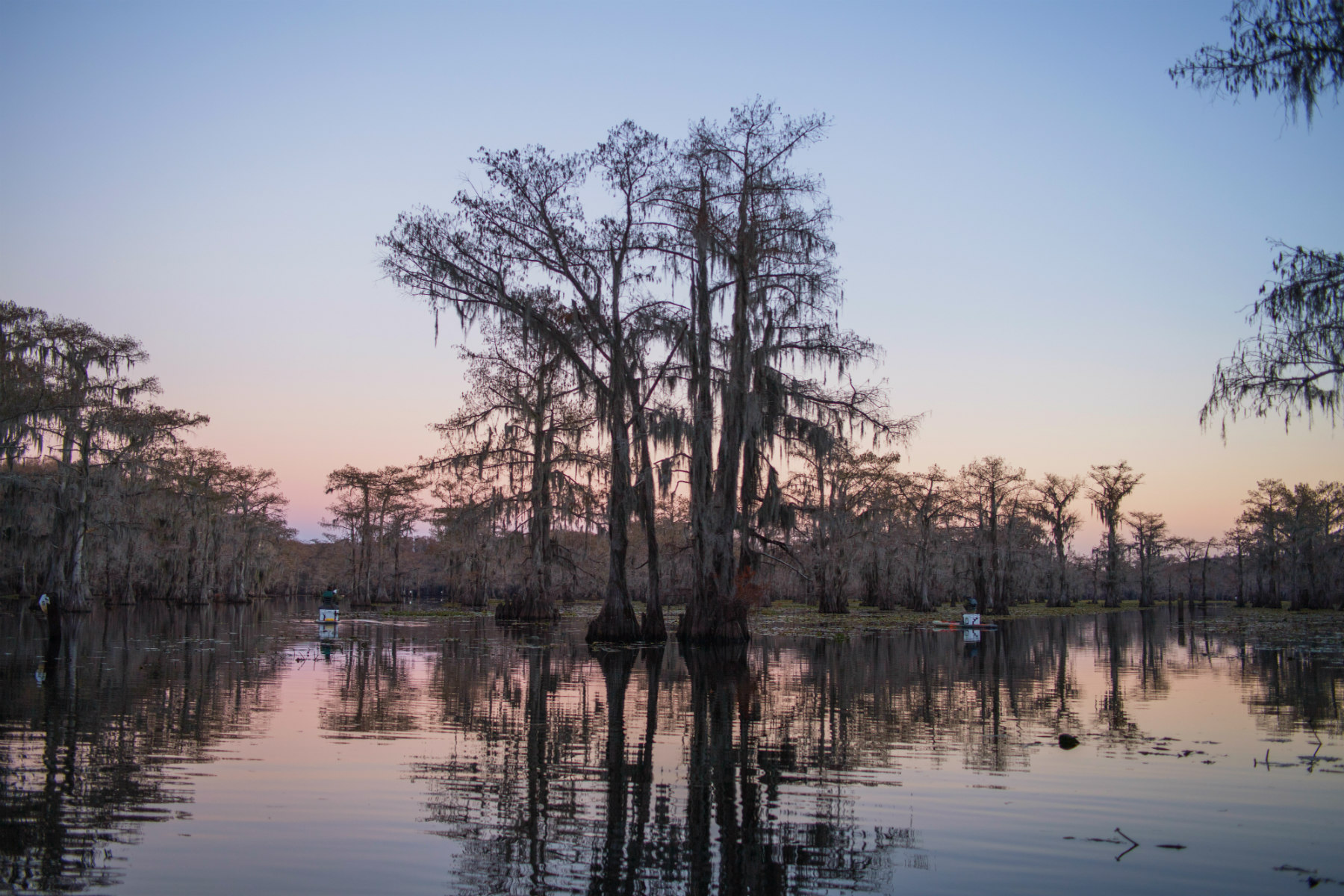 As darkness slowly crept in, the owls seemed more vocal than the night before. With a New Moon rising in the night sky, our fire offered the only light. When the unexplainable drum rhythm returned, so did our wonder and unnerved curiosity of what it might be. Occasionally, we heard the sounds of distant trains among the owls and the other birds of the night, but this beat changed directions and volume every so often until it would seemingly fade out, but then return without faltering in meter.

As we went to bed not on edge, but completely perplexed, I thought of the Caddo, and what could make that noise in the swamp. Was it a voodoo shaman in a canoe? Or was Noah right? Are Sasquatch known for drumming in the middle of the night? Internal contemplation gave way to no answers, only exhausted my brain into eventual sleep. 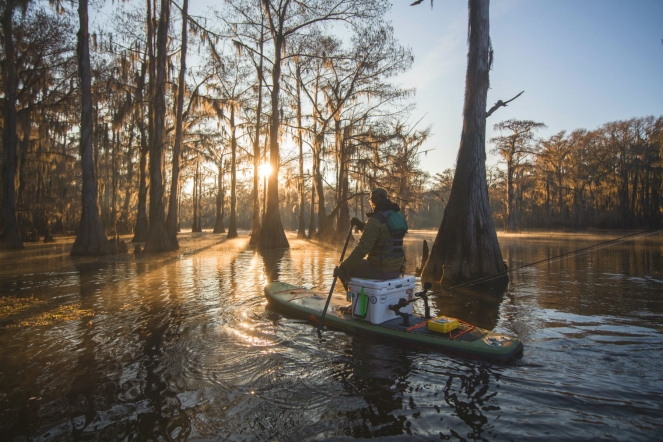 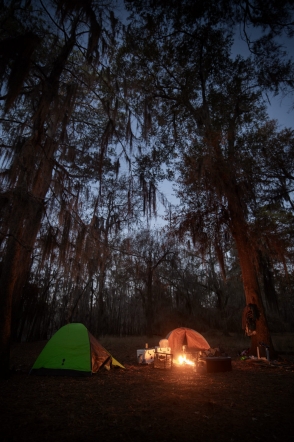 The next morning, we learned the weather had taken a turn and would be worse than we thought for the last day of our trip. Although we were prepared with rain gear, after some discussion, we ultimately decided to pack up and head back to the ramp to avoid the potential flooding of our camp.

As we made our way back the way we came, following the Texas plates from cars long gone, I was sad to be leaving Caddo Lake. Three days spent in the flooded cypress felt much longer. As the rain clouds moved in, we loaded up and left Uncertain behind, but I knew I’d be back to find comfort in uncertainty again.