If you let your daughter volunteer at the local animal shelter, then you’re going to end up with an animal in your home, which is how we came to adopt Rusty, an alleged Chesapeake Bay Retriever/ Labrador mix who doesn’t like water and won’t retrieve anything.

He wouldn’t have been my first choice, but sometimes you don’t choose a pet; they choose you. And Rusty did this by coming into our house, going to the basement, finding my rolled up raft, lifting his leg and peeing on it. 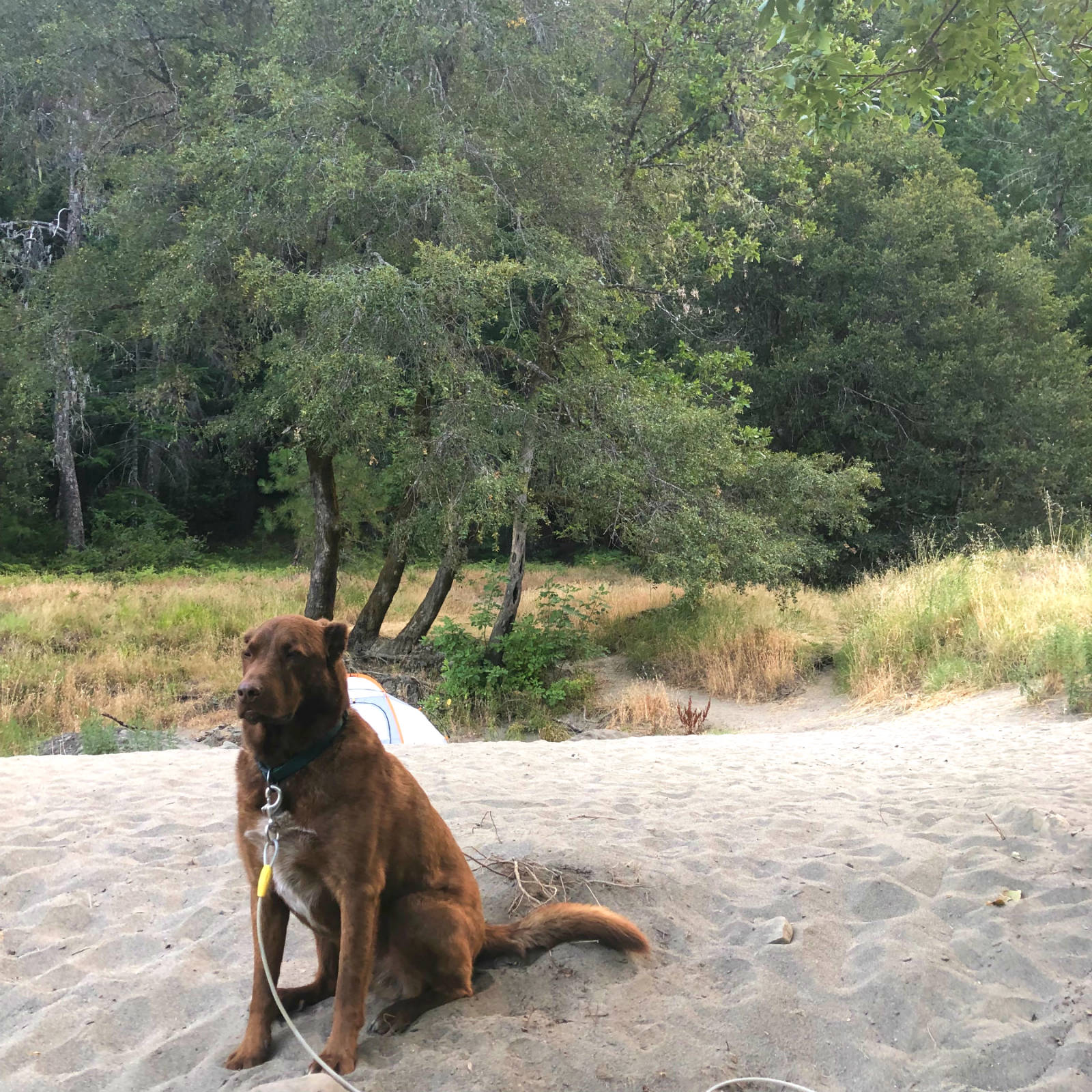 Before long we learned about Rusty’s other endearing traits. Thanks to a stint as a nursing home comfort dog, during which time he was probably fed burnt toast and uneaten jello, he became, and still is, food motivated. Anything on the counter is fair game. And his past of bouncing from place to place inspired the kind of separation anxiety that gives him the power to deconstruct metal kennels with his teeth.

He also has an infuriating ability to ignore his name when he is otherwise occupied. He jumps on the furniture, tries to sleep on the bed and rolls in dead things. Add to this list the need to fight other dogs, and you have a pretty good description of Rusty.

As a water dog he is reluctant at best. His separation anxiety battles with his general dislike of deep water. He will swim across a large lake to follow me in my kayak, but he won’t like it. And on a hot day he will go into the water up to his belly but no farther.

In a less than perfect placement, a family that spends all summer boating adopted Rusty. And since we weren’t going to change our lifestyle, we bought Rusty an NRS CFD (Canine Flotation Device) and hoped he would make peace with his new life. 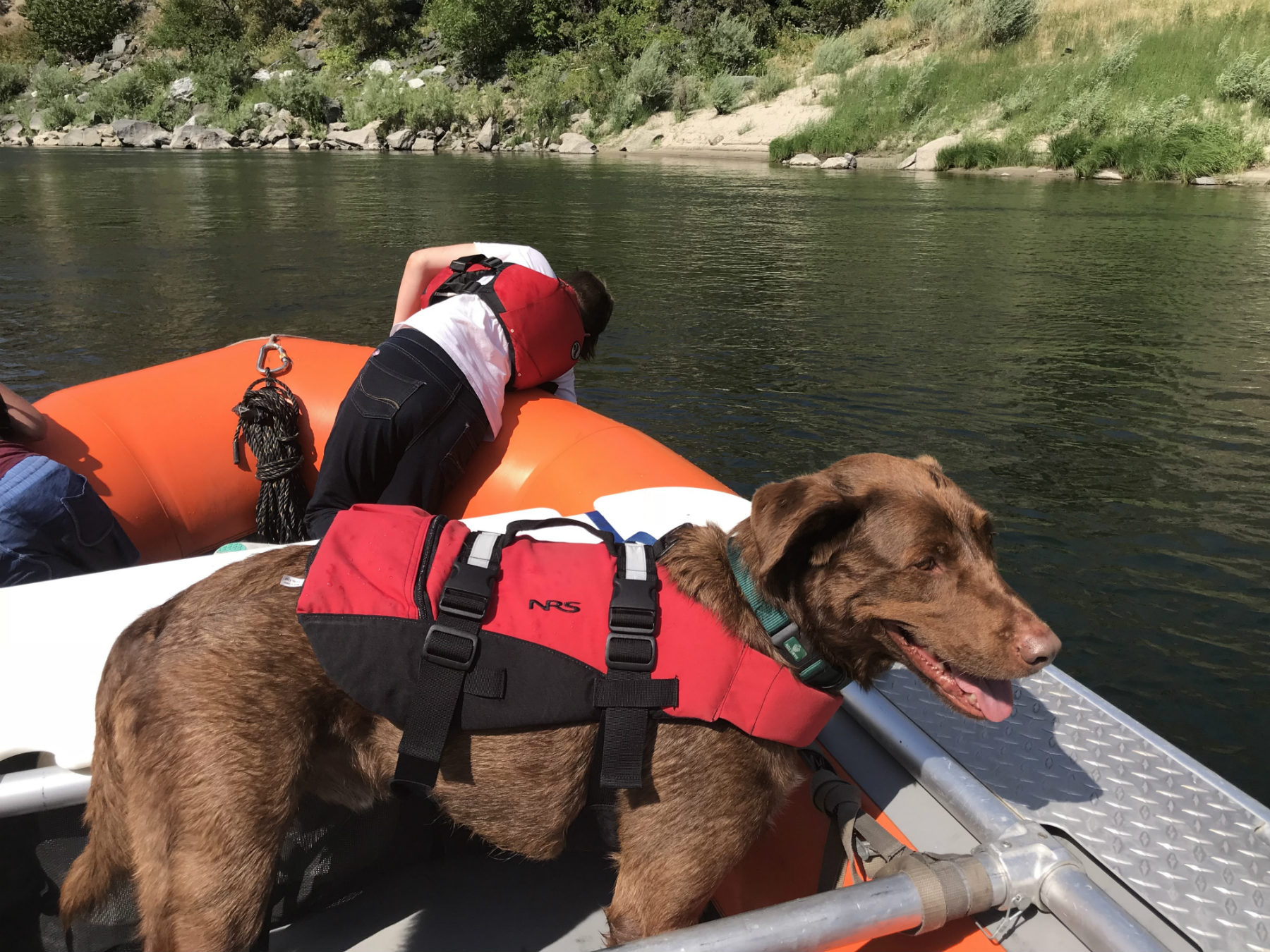 His first whitewater experience was on the Lower Salmon near Riggins, Idaho. He rode upfront in the raft between the kids. After the first set of rapids, during an unattended moment, he jumped overboard and began frantically swimming for the shore, as if to say “hell no!”

The handle on the CFD allowed us to lift him out of the river and set him back on the raft. More rapids followed. We all felt bad about terrorizing our dog, but the other option was boarding him while we were floating rivers and, although we didn’t consult Rusty, given his separation anxiety, this option seemed worse.

Fortunately, rapid by rapid and river by river, Rusty has become more comfortable on the raft. On the river, his separation anxiety outweighs his fear of moving water. When we start loading the raft, he’s the first one to jump on board.

We joke that he has become standard rafting equipment—he even has a handle. 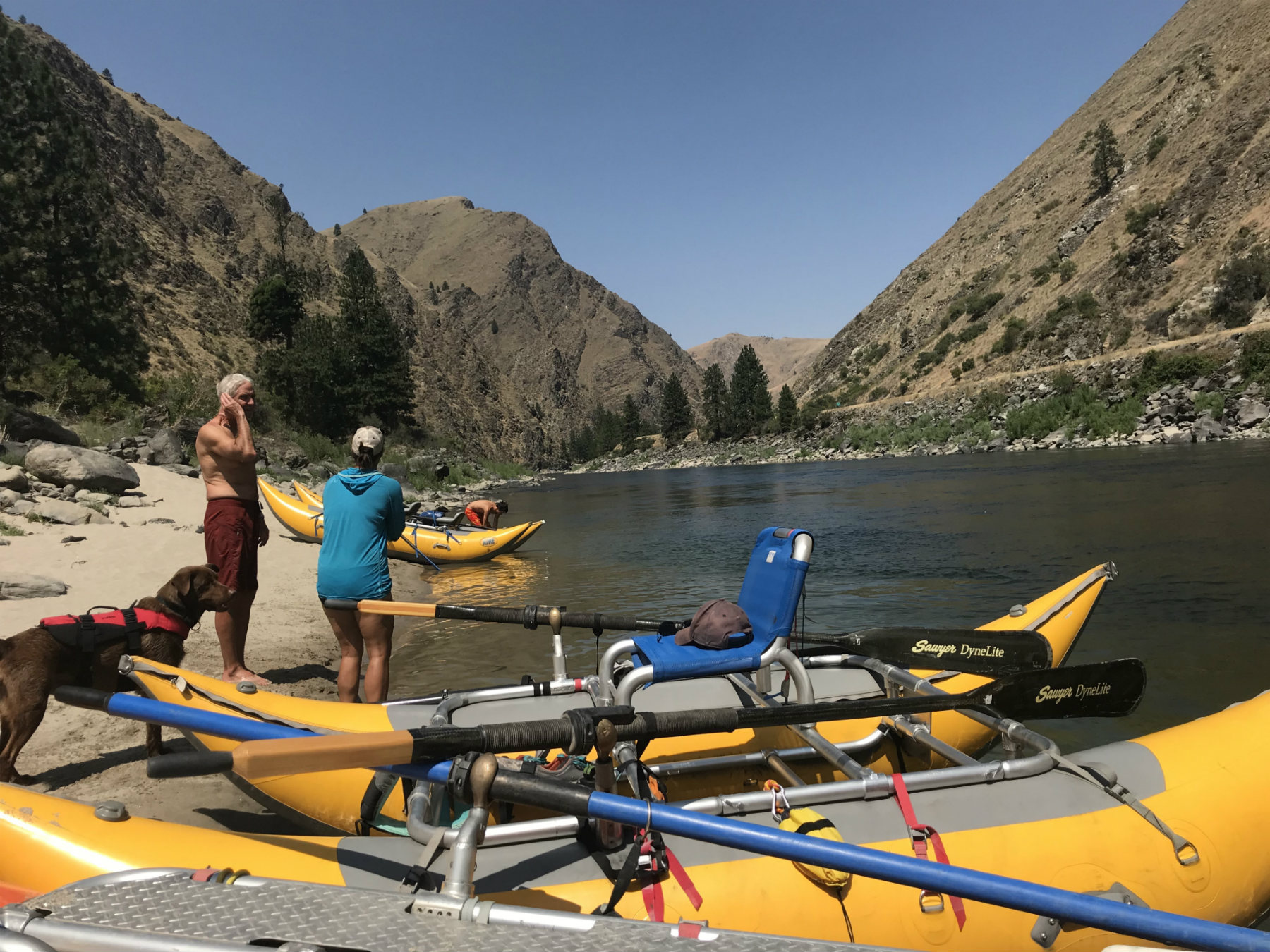 This summer we won a July Rogue River Permit. Not all rivers allow dogs, but the Rogue does so Rusty was going rafting again.

The ranger at the Smullin Ranger station, where we checked in for our river permit, warned us that the Rogue River Corridor has a bear problem. A number of groups had a bear or multiple bears raiding camps both day and night. Bears bulldoze camp kitchens, swipe unattended bags, and even climb on boats to inspect coolers. The problem is bad enough that the BLM has installed electrified enclosures in many of the most popular camps.

Besides the usual bear precautions of cooking in a separate area, keeping food in bear-proof containers and keeping a clean camp, the ranger advised taking coolers off of the rafts at each camp and strapping everything together, so gear would be harder to haul off. She also said to pile dishes up on the camp table: “A bear is going to be in your camp and you want to know about it.” 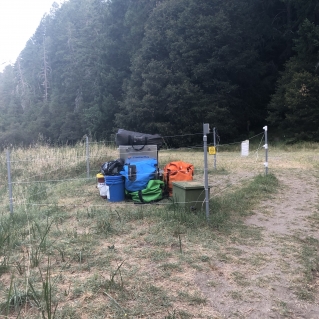 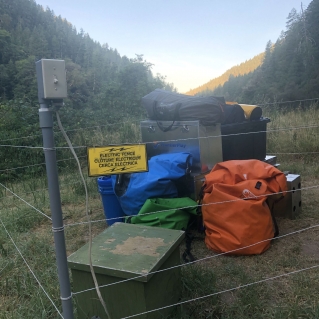 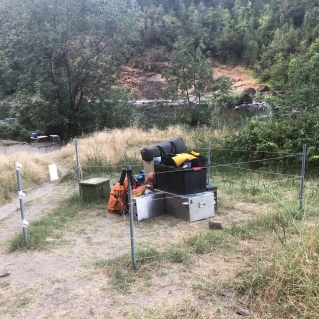 The ranger also gave us a bear observation form, which made the situation seem serious in a more bureaucratic and official way like we were census workers for a hungry, sharp clawed, population of wild animals.

Before we left, I asked the ranger if dogs were a good bear deterrent. I’d heard conflicting opinions. “The best,” she said.

I was still nervous. Not really for my personal safety; there hadn’t been any bad human-bear encounters as far as I knew. More so for my boat. A bear with sharp claws climbing around on my raft had me imagining Edward Scissor-Hands in a bouncy house. And then there was the whole cooler thing. I did not want to lug a heavy cooler full of beer and food out of my raft at every camp.

The solution, I decided, was to sleep on my raft. But not alone, of course.

In the bow of my boat, I made a nest of PFDs and beach towels, where Rusty would sleep. I then stretched my sleeping bag out on my front decking. 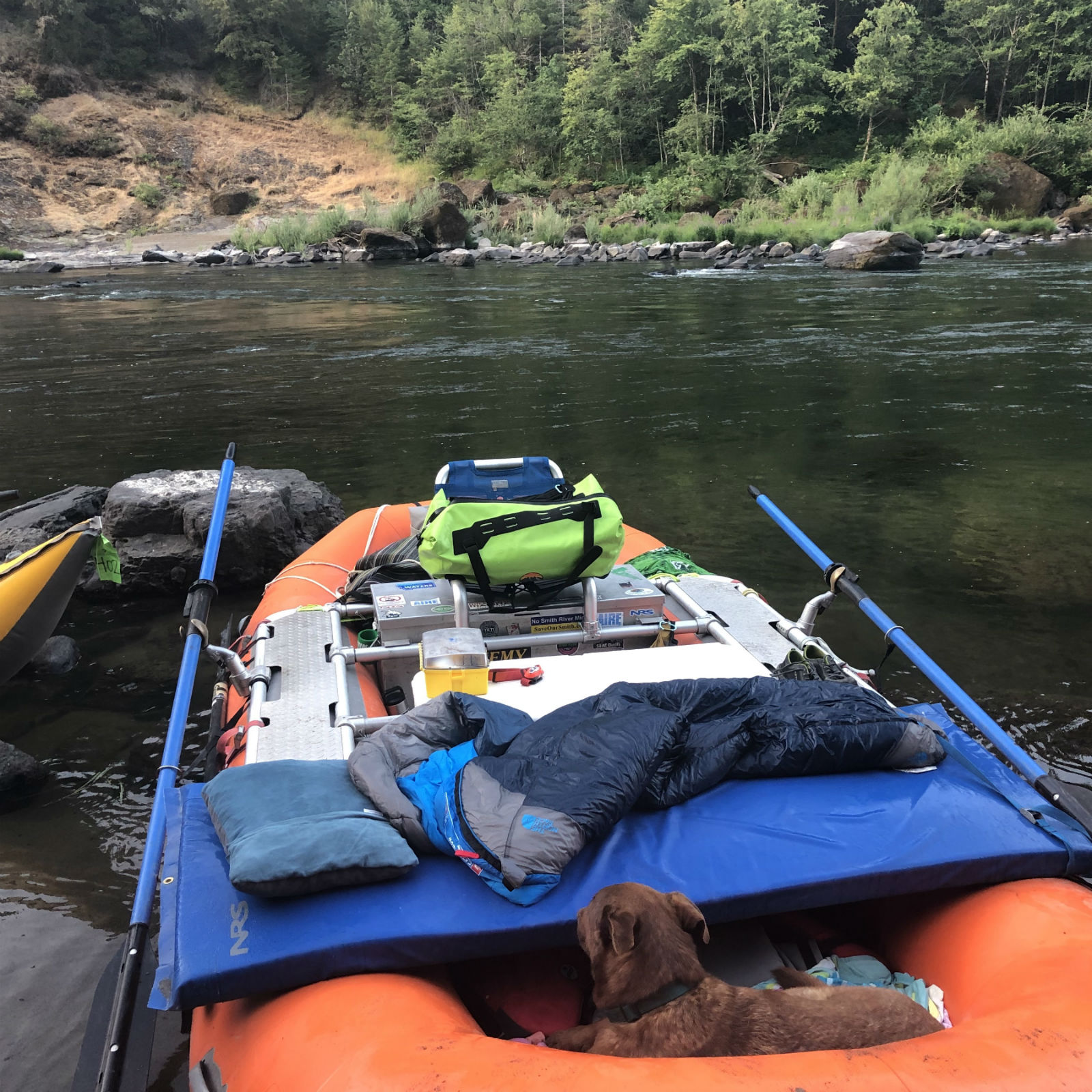 At the first camp, Rusty and I slept undisturbed. At Wildcat, our second camp, in the middle of the night I woke with Rusty growling and barking at the riverbank. A bear? Maybe, but maybe just a racoon.

It wasn’t until our third and fourth night where we laid over at the Middle Tacoma Camp that we found ourselves in a rough neighborhood. An electric fence enclosed a small area for gear on the riverbank, which gave the first clue that bears were a problem in this camp. The second clue was a shredded drybag with gear strewn just off the trail that we found when we made a day hike to Tate Creek Falls. And the third clue was an actual bear in our camp, which a member of our group scared away. Yep. This camp had bears.

Later in the afternoon, a guy from an upper camp wandered down to ask us if we had seen a backpack that a bear had dragged off. He found it down by the river, also shredded.

The first night we piled our gear inside the electrified enclosure. It was apparent that bears were going to take everything that wasn’t protected. I still didn’t take the cooler off the boat. I reasoned that there was a big dog and someone really in love with his boat between the bear and the cooler.

That should be enough, right? 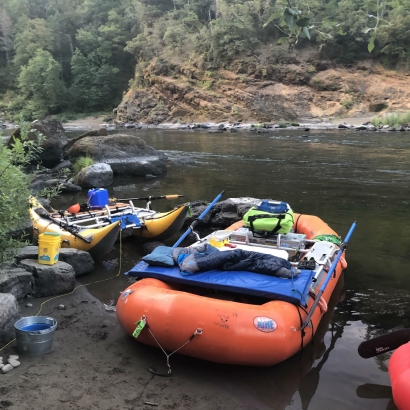 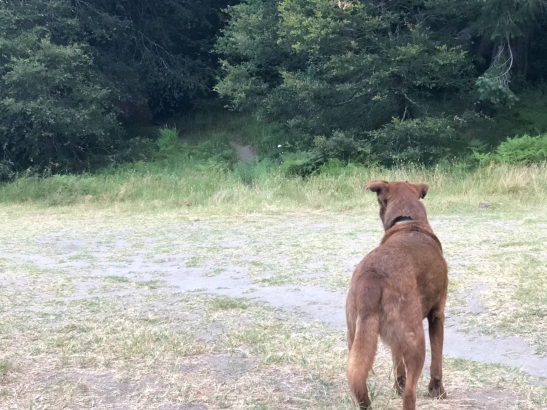 I had just fallen asleep when the sound of two gunshots woke me. I half expected to hear sirens, before I groggily remembered I was in the wilderness. The next morning, I learned that in an effort to scare away a bear, the people in the lower Tacoma camp had fired the shots. They had tried banging pots and pans and throwing things but the bear sat—unfazed—and watched them eat their dessert until they fired the gun. Again, clearly a bad neighborhood.

In the early morning hours, I woke to Rusty’s low growl, which quickly gave way to full on barking then a short chase up the beach. I followed with a headlamp. The bear disappeared like a furry, fat ninja but I saw his tracks in the sand.

After the bear was gone Rusty continued growling and created a perimeter line with urine, peeing on every vertical thing in camp. I felt a swell of pride. Here, on the Rogue River, was finally a place where Rusty was a good dog, where his bad habits were good habits.

On our final night, a bear came right down to the raft, where we slept. Rusty went off like a bomb, barking and leaping out of the raft. I woke to see a bear bounding away and Rusty in hot pursuit. The bear fled past the tents and Rusty chased it to the trees and then, wisely, retreated back to camp. 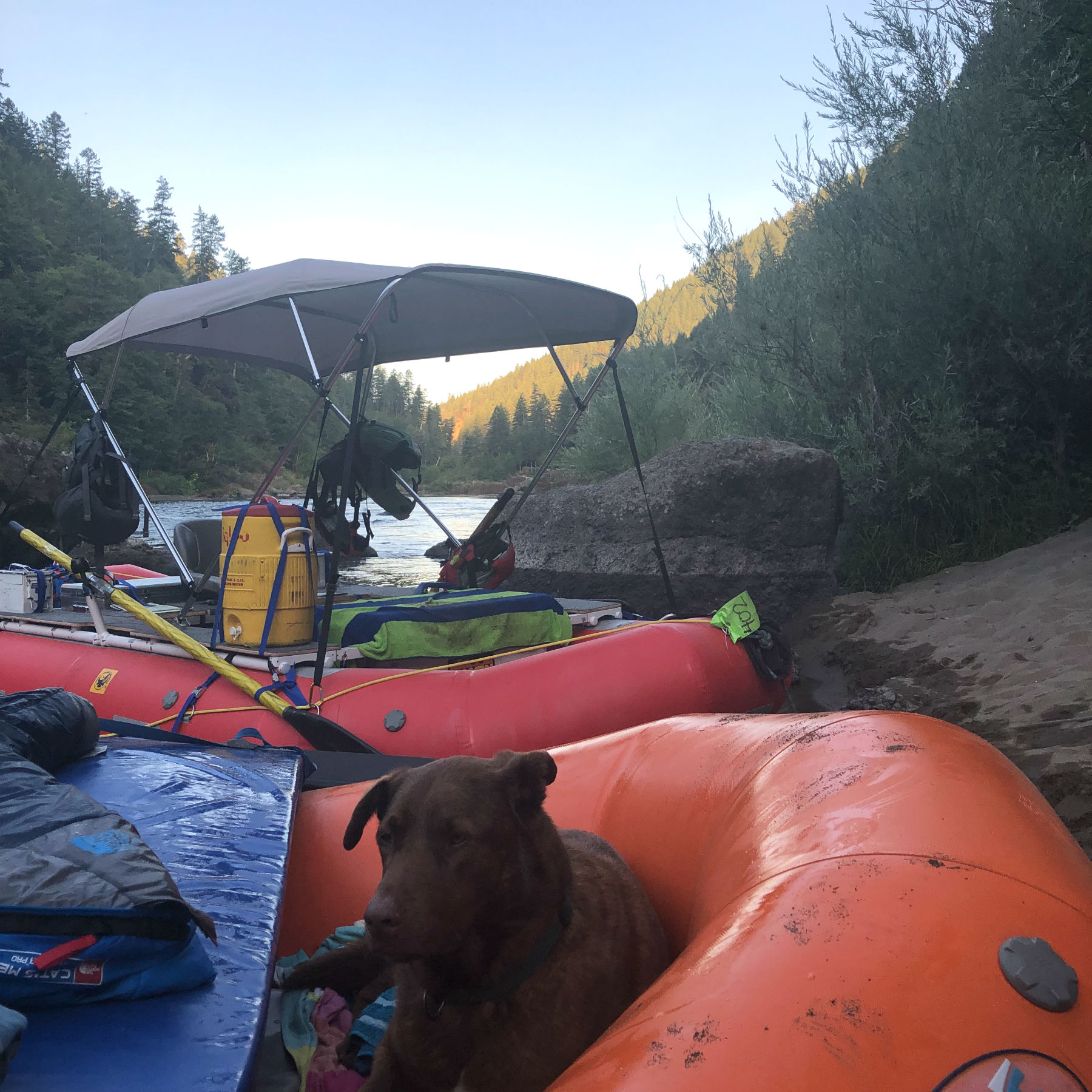 In the morning everybody in our group praised Rusty.

Was this our Rusty they were talking about? The same dog that we’ve had to repeatedly apologize for?

While people patted Rusty on the head and gave him a few breakfast scraps, my family smiled smugly, like people who have brought a piece of river gear on the trip that everybody else wants.