A Grom’s Perspective on Teaching Kids to Kayak

I have been fortunate to grow up in a kayaking family. In a previous life, my dad, Mike, was a kayak instructor at Idaho State University. When he first met my mom, Jody, he taught her how to kayak and they have loved kayaking together ever since. I’m the youngest of three boys and we all love kayaking. We get asked a lot how Alec, Hayden, and I learned to kayak and what made us love it so much from such a young age. It all started with how we were introduced to the river.

We were pretty much raised on the river. Every season, our parents would set up a basecamp in the Banks parking lot. We spent our early days playing in the water, building sandcastles, and throwing more rocks than you could imagine. My parents took turns paddling sections of the Payette River—dad paddled the North Fork and my mom paddled the South Fork. Sometimes, if my grandma was there my parents would go together. After they put in their runs, we would pile into a raft and take a family trip down the Main Payette. Once us kids had transitioned into our own kayaks, we put-on the Lower Main for family laps. 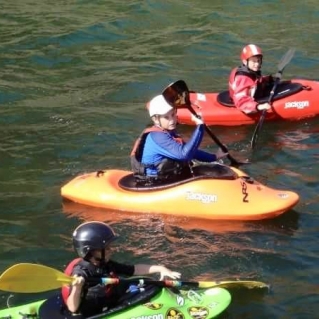 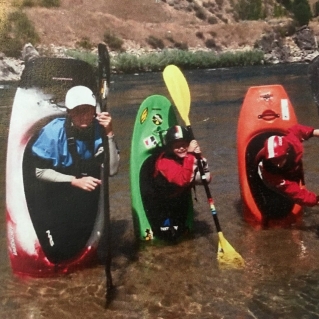 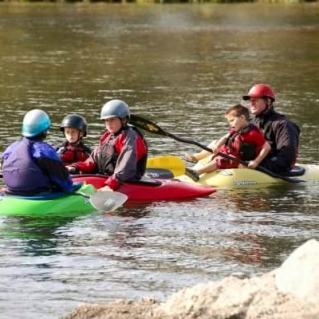 Being the youngest of three brothers, my parents had a pretty solid system for teaching kids how to kayak when my turn came around. By the time I was two, I was able to go with them in an inflatable kayak or the Topo Duo (this was before the Jackson Kayak Dynamic Duo). By the time I was five or six I was paddling my own kayak on the river. Having two brothers to paddle with definitely gave me an advantage. Learning to kayak was really fun because I had other kids to kayak with.

That seems like such a long time ago. It’s hard to answer the age-old question, “How did we learn to kayak and love it so much,” when kayaking was simply part of my childhood. But last year I was able to help teach at Kelly’s Whitewater Academy. While teaching other kids to kayak and enjoy whitewater, I started to reflect on the past 14 years of my kayaking and remembering what helped me when I was just getting started.

Get gear that fits. You would never tell a six-year-old that they can borrow their mom’s skis and ski boots, but I see it all the time in kayaking where kids are trying to paddle in gear and boats that are way too big for them. It’s so hard to paddle in a too-big boat or gear that doesn’t fit well. Not to mention, it’s not safe. NRS (and plenty of other brands) build gear specifically for kids so that it fits comfortably for paddling.

Starting with lifejackets—the most important piece of gear—my family always recommends the NRS Vista Youth PFD. Its low-profile design has a short torso, which fits smaller kids perfectly and doesn’t push up into their face. Keep in mind, there are three sizes for kids’ jackets: Infant (0-30 pounds), Child (30-50 pounds) and Youth (50-90 pounds).  You also want a helmet. The WRSI Current Helmet is a super safe, super comfy helmet. It’s the number one choice for Kelly’s Academy at Kelly’s Whitewater Park in Cascade.

A paddle and sprayskirt are also pretty important. A paddle that’s too big and heavy will wear out the paddler sooner. I like the Werner Amigo Kid’s Paddle. The plastic blade is small enough to keep weight down but still pushes water efficiently, while the shaft is small enough to fit a kid’s hand. As for the sprayskirt, consider starting off using one with a drawstring shock cord around both the waist and cockpit. For kids who haven’t mastered a roll, this is crucial. When they tip over, they will literally just fall out of their boat without having to pull the skirt. An automatic wet-exit will ease kids into the idea of being upside down without having to think about how to rescue themselves. When they’re ready, upgrade to a traditional skirt.

Technical apparel and footwear aren’t necessary unless you’re learning to paddle in adverse conditions. There’s no shame in using hand-me-downs and second-hand paddling jackets and shoes. Trust me, us kids grow and we can grow fast. On the other hand, there are some gear specs to keep in mind. I’ll never forget the feeling of claustrophobia that the latex gasket caused. (Spoiler alert: I got over it.) But there are neoprene neck gasket options, that although aren’t fully ‘dry,’ they keep 95% of the water out and are 100% more comfortable.

To cover the basics, just get your kids a paddling jacket to keep the splash (and chills) to a minimum, neoprene pants for insulation and scrape protection if they swim, a rash guard or other sun-protective shirt and some solid river booties. Having good river shoes is important for kids because they’re usually walking or portaging around bigger. It is great to walk around rapids but also watch people run them from the shore so they can learn to read water. 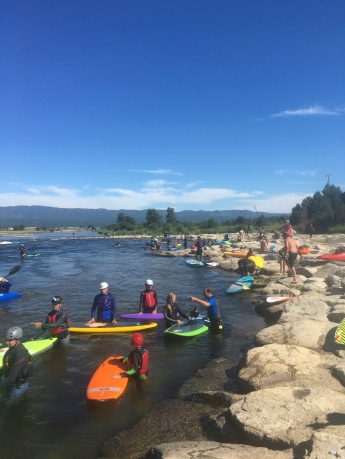 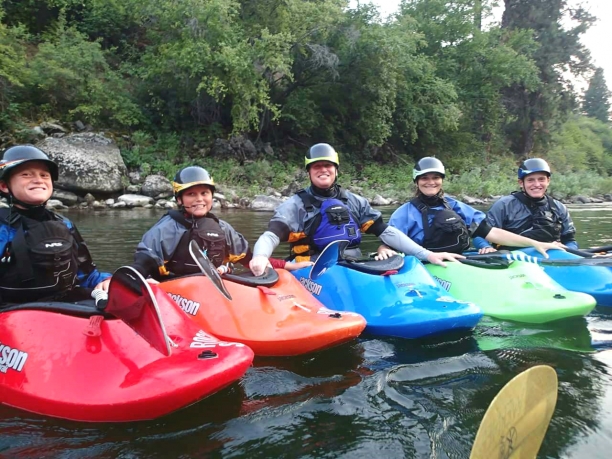 The Voorhees brothers and friends.

Choose a kayak made for kids. Like the paddling gear, kids need to learn on a kayak built for them. We started out in the Jackson Kayak Fun 1 or Fun 1.5 because it was easy to maneuver it. Once we got our roll, we moved to the Jackson Kayak Shooting Star, it was a little more stable river runner and we learned to surf and playboat which brought a level of fun into the mix.

Even though it seemed small to other people we still paddled them in Class III or easy Class IV because they were easier for us to go where we wanted to go and turn when we needed to. We didn’t get blown out on our eddy turns because the boats were short, and we could control it. We didn’t start paddling a kid’s creek boat like the Jackson Kayak Sidekick until we started paddling bigger water.

Another thing my parents did to make kayaking fun was to encourage building a relationship with our boat. Kids love stickers. So, my parents made a point to encourage us to pick up kayaking and river-related stickers wherever we went and then we each decorated our boats. 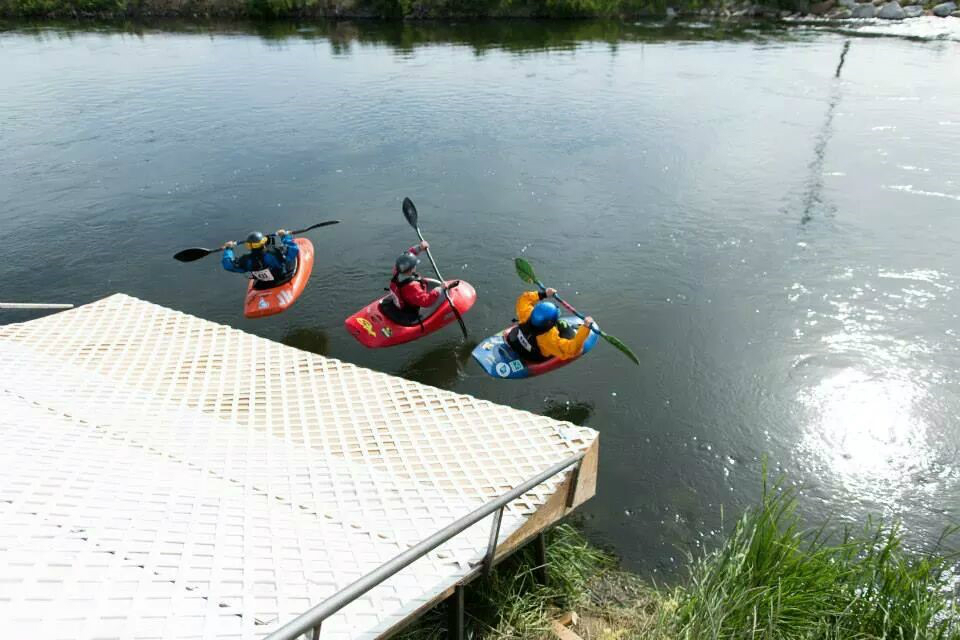 Play and practice in the pool or flatwater. We spent so much time in the pool just playing. Don’t get me wrong we had times where we were learning but my parents always kept it fun. They would toss us in the air like loops, play games, practice rolls, and jump off tipped over kayaks. My parents also made sure to surround us with other paddlers who were learning, too. It was important for us to be around other beginners so that we could see other people, especially kids, who were struggling with the same skills and practicing at our level.

Start in a duo or inflatable kayak. Like I mentioned before, my parents first started taking us down the river when I was two-three years old in the Topo Duo. Initially, we would just skirt the rapids, but we thought we were in the big waves. They would do eddy turns and I remember feeling how fast it felt being in the front going in and out of the eddies in that big boat. My parents said that later we already knew how to lean and the motion of the eddy turns when we got in our own kayaks from all the time spent ‘playing’ in eddy lines in the duo. I remember loving to surf the Constriction Wave on the Main Payette with my dad in the Duo. Sometimes, I even fell asleep in the front, only to wake up to the movements of dad surfing. 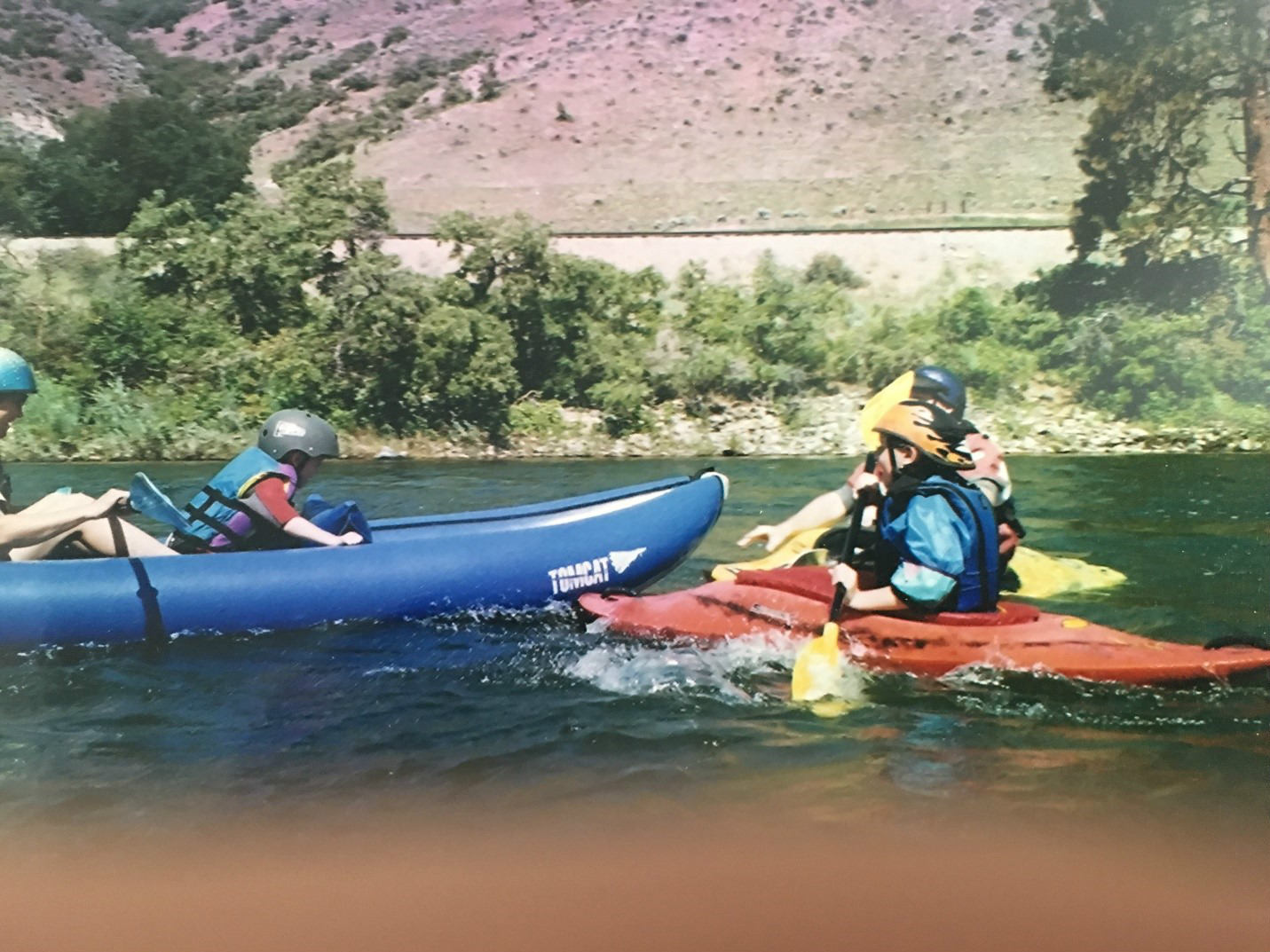 Roll practice can be fun, offer incentives or make it a competition. Before I turned seven, I practiced rolls in the pool and in the river a lot but never seemed to nail it. But then, around age seven or eight, the roll just clicked and I moved on to combat rolls.

Once I learned to roll, I remember one day my parents said if I did 25 rolls down the Main Payette they would stop and get me ice cream on the way home. After I rolled 25 times, it became a kind of a game and I said I bet I can to 10 more, and then I bet I can do 10 more. I ended up doing 126 rolls from the bottom of AMF to Beehive Bend (the take-out of the Main Payette), which was just a little under a mile. That day changed everything. My roll was solid and my confidence really went up.

Play games in your kayak. My parents and I always played games down the river. We would play follow the leader and chase (turtles and sea urchins); we would throw sponges at each other and keep score on the number of times we hit each other. At Kelly’s Academy, we play “Sponge to the Face,” kayak polo, and tag. I’ve noticed, especially when I’m teaching, that when you distract kids from focusing on the skills by playing games they start to use their edges and paddling strokes without even thinking about it. The games keep it fun but also help learn things without thinking about it too much.

Start out on easy whitewater. We started out on really easy Class II with just some ripples and a few waves. We would sometimes put in part way down a run to avoid bigger rapids and then we wouldn’t have to portage—portaging is a quick way to wear out a kiddo and can easily associate bigger rapids with dread. Once we were comfortable, we would add other rapids onto that section or work on making easy sections harder with lots of eddy turns and playboating. This kept us challenged without increasing the risk.

Swim in rivers and through waves. I spent a lot of time swimming in the river and through rapids in my lifejacket, which made me really comfortable in moving water. When I started kayaking if I swam, it really didn’t bother me. I remember swimming a rapid when I was really young like 5 or 6 years old and my dad asking me if I was okay and I said “What? I like swimming, right?” 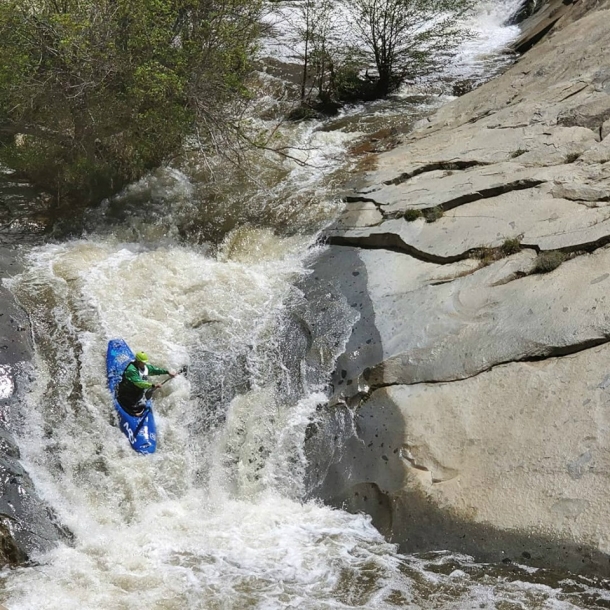 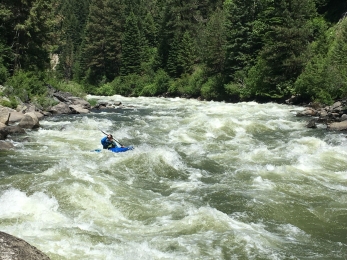 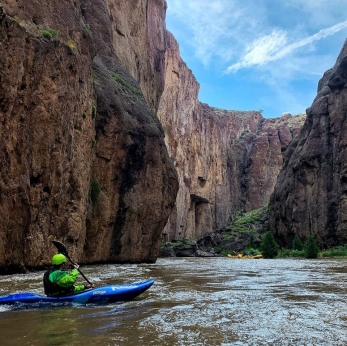 Paddle with other kids if you can. The times I had other kids to paddle with me, always made for a more fun day. We played more but we also pushed each other like kids do, so we got better together.

Kayak competitions encourage progression and are fun. The number one reason I kayak is that it’s a lot of fun. I went to a lot of kayaking competitions, which were also a lot of fun. Competing took me to other places, giving me a chance to meet really cool paddlers. I’ve met some of my best friends through competitions, and I now have a paddling community all over the U.S. and even other countries. Competitions pushed me to improve and learn new things. Plus, I won some really fun prizes! I was the Cadet National Champion in Freestyle Kayaking in 2016. And last year when I was 14, I competed in the North Fork Championship for my first time.

The biggest reason I love kayaking is because my parents made it really fun from the start. Through the years, I’ve gotten to meet a lot of really great friends and travel to places and see things that most kids don’t get to see or do. Your kids can love kayaking too, if they learn in a way that’s fun and lets them enjoy the rivers.

When Guest contributor and NRS Ambassador Connor Voorhees got his first kayak, he slept with it for weeks and took it to show-and-tell. 14 years later, he’s still sleeping with his kayak, but mostly just on overnight paddling trips.