I felt a subtle misfire in the van, did my best to ignore it, attributing false hope toward a sudden blast of wind swaying the vehicle. Moments later I felt another. I hit the accelerator and she bucked, stuttered and finally died, forcing me into the sand where a shoulder ought to be located. I wasn’t entirely unfamiliar with this process after chasing an electrical short to the fuel injectors across half of Ecuador and the entirety of Peru but this time it was different.

Here I was, in the Atacama desert, a Mad Maxian sandscape, the driest place on earth with a dead motor and a raft frame strapped to the roof rack. The irony of the moment left me feeling like Don Quixote—wrong time, wrong place and drifting toward madness. Had I come this far to hear my motor seize in a place completely void of water?

Shale dog jumped ship and made use of the van for shade, panting uncomfortably on the uncooled patch of mid-day dirt. A few hours of tugging on wires and adding pressure with a series of zip ties and it fired. We limped into Arica, a moderate size surf town on the north Chilean coast and finally found a mechanic willing to re-wire the system, a mere three countries after the problem began.

The Venezuelan mechanic worked behind a series of tarps on an abandoned lot. His business was unofficial to say the least, a patchwork of tools and scrapped parts. He was confident, however, and proved to really know how to fix the problem. The van experienced a born again surge of power, jetting upwards to 16,000 feet, El Cajon pass, through the Argentina red rock desert, into Golden Dorado territory and south, through the agricultural heart of Argentina until we reached the banks of Rio Negro at Neuquen. Here, we had reached the tail end of trout country where it meets desert and I made the final turn toward distant snow-capped peaks in Patagonia proper, relieved and ready for the rivers ahead. 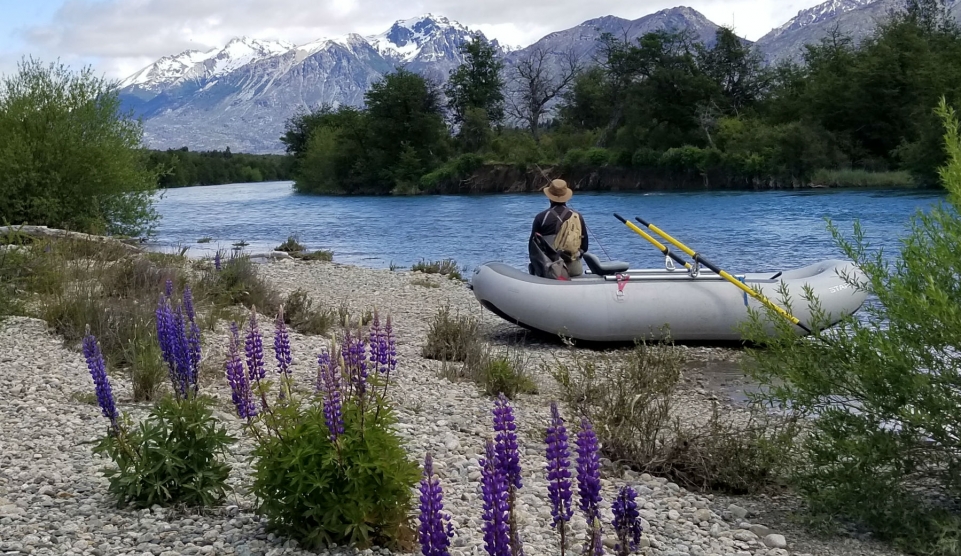 I pulled into San Martin de Los Andes a few days ahead of the official fishing opener. The fishing licenses were not yet on sale so I camped on the street, directly in front of a fly shop, waiting and pestering the staff daily until they sold me the first fishing license of the year— number 0001.

Not having my next move in mind, I shot an email to Ron from Chocolate Lab Expeditions. I’d seen Ron on a boat ramp in Montana but didn’t know him by any means and was hoping for a little direction on the local rivers. He replied, inviting me to the boat shop for a shower and the opportunity to look over local maps. A few days later the season opened and we decided to make a run down the Chimehuin River for a two-day camp float before the guides were engulfed in the busy season.

The Chimehuin, like most rivers in this region, begins at the outflow of a large lake. Lago Helquelefen sits directly beneath the stunning snow-covered Volcan Lanin, which acts as a natural filter for the river, ensuring it always runs perfectly clear. Although high, the water conditions were excellent as I assume they always are in a river that never actually experiences a state of sediment-filled runoff. We launched in one of Ron’s drift boats from his other business entity, RO Drift Boats Argentina. His son Benito joined us and two guides, Diego and Facundo ran the gear boat—an Aire cataraft, smuggled down from the states a few decades prior.

I’m used to rowing the boat for other anglers. But on this trip, Ron manned the oars giving me the rare opportunity to fish while an expert navigated the river. He placed me on every subtle trout holding lie, spots only a guide with a few decades of experience here is likely to know. He positioned us to fish tight against the bank. I was skeptical about working a big streamer through the shallows when the water clarity should have shown fish sitting over the light colored substrate. “Trust me. Work tight against the shallow banks, right up in the bushes” Ron said.

A few average size trout later and my confidence in the strategy was growing. We stuck to the plan and eventually, a big shadow drifted off the bank, tracking my fly. I struggled to wait on the hook set, barely managing to contain myself until the fly disappeared into the big brown’s mouth. I finally set the hook and the brown exploded out of the water. It led us on a short chase to an inside seam, conveniently slow enough to land this perfectly shaped, beautiful trout. 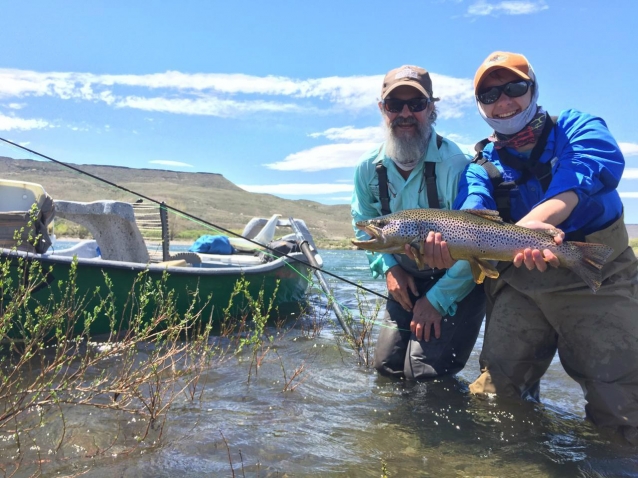 Ron and Benito on the Chimehuin. 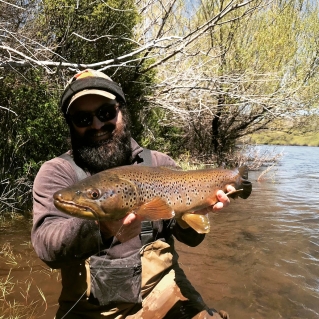 The entire day went this way until we pulled into a riverside camp where Diego and Facundo setup for an asado. I tried to help but like many Argentines, they’re experts at cooking over fire and are proud to take the reigns. We had enough beef for ten, there were only five us on the trip plus Shale dog, and yet, I don’t remember seeing any leftovers.

The coals ran hot all night, we drank Fernet and coke and slept perfectly on NRS river beds and roll-a-cots under a thick blanket of stars. The next day we did a boat swap and Diego and I had a great time catching trout on the cataraft until a stiff tailwind pushed us toward the takeout just past the confluence with the Collon Cura River.

After the float, I loaded the Dometic fridge in my van with rolls of salami and prime steaks. Shopping in Argentina grocery stores is a dream for anyone who loves red meat and wine. Both are plentiful, high quality and dirt cheap. Ron and I poured over maps and he pointed out rivers, lakes and remote places in every direction. Stocked with food, I set out for a full month bouncing around backroads with a few quick stops at the boat shop to resupply and shower.

I pushed north past the town of Alumine and fished back south, hitting places like the Rio Pulmari, Lago Quillen, Rio Quillen, Rio Alumine, Rio Malleo, Rio and Lago Verde, Lago Curruhue, Collon Cura and other streams and lakes scattered across a landscape with no shortage of trout-filled water. On a chance meeting, my friend Bear from the states happened to pass on a motorcycle and we teamed up, taking turns pulling on the oars and catching an uncountable number of trout.

Brown trout on the Collon Cura.

The weather shifted alongside rapidly changing climate zones. Lago Curruhue sits high in the mountains near the Chilean border. Dense bamboo forests and a coastal climate influence delivered strong afternoon winds and bursts of rain fresh from the sea. In the mornings, however, I rowed to a point with scattered logs and an intense dropoff camouflaged untouched trout that cruised and ate without hesitation. This large trout-filled lake was completely void of anglers and for the four hours of non-stop morning action, I had the entire place to myself.

When the rain blew in hard, I simply drove an hour of dirt roads away from the border zone until bamboo gave way to brush and a high desert environment. The lower Malleo river served as a perfect place to escape the wet weather patterns, although trying to escape the strong Patagonia winds when storms rolled across the countryside was impossible.

The entire month of November went on the same schedule. Wakeup, make coffee, fish hard, take a nap, eat a roll of salami, fish until dark, eat dinner, sleep. As November came to a close, the spring weather continued and I felt a pressing need to work south toward Futaleufu and Chaiten, places I knew, once guided and missed dearly.

I took a final shower at the boat shop and made a move south, working across the Seven Lakes Road to Bariloche. An overnight stop at Lago Faulkner turned into nearly a week of catching chrome bright rainbows and a few sizeable brown trout. The month changed to December and as I reached the famous Limay River Boca, the lupine sprung into full bloom, turning the green fields into a sea of purple and pink flowers.

I slept on the windy Limay River after swinging unsuccessfully with the spey rod alongside a diehard group of anglers dedicated to the occasional monster caught here. Watching the city lights of Bariloche flicker at the base of some very large mountains made for the perfect night light and although it seemed like a good place to stay, I pushed south once more, making a run for the Carrileufu River and the bounty of waters surrounding Esquel and Trevelin.

Bear rejoined me on the Carrileufu. Nestled amidst a breathtaking valley, the Carrileufu’s water was clearer than anything I’d after cast into before. It’s no surprise Butch Cassidy chose to live here. We fished streamers hard all day, despite seeing a few mayflies, some caddis and the occasional rising fish. The strategy paid off with a series of beautiful rainbows, one—missed— large brown and two small landlocked Atlantic salmon. It’s a river that almost gives up its secrets a little too easy and becoming intimate with the log jams, slow banks and midriver structure makes it appealing and easy to fish. I could do this one everyday and be just fine with the result.

I basecamped at Trevelin and spent my final week in Argentina fishing small rivers and springs. The Rio Grande, known on the Chilean side as the famous Futaleufu, is the big fishery in this area. Beginning from its dammed origins, it reminded me of a large version of Montana’s Missouri River. After a day of wading, I opted to spend the last week of my Visa floating the Rio Grande from the dam to the border crossing.

The night before I left, they increased the flows and I woke up to a river more than five times the flow as the previous day. Luckily this stretch is fairly languid, so I set up the raft, tied off the guard dog and drove to the border to ditch the van and hitch back to the launch site.

By the time I actually pushed off, it was early afternoon and a strong wind set loose, making it nearly impossible to row and fish simultaneously. The anchor failed to catch the bottom against the wind and I spent the first evening camped not far from the boat ramp. The next morning was a different story with calm waters and clouds of rusty mating mayflies. Spinners danced on the water, dropping eggs gracefully. The insatiable trout consumed many, inhaling their breakfast at every opportunity. I should have tied on a dry fly to match this event but fishing the streamer from a slow-moving boat is much easier than managing a drift. Sticking with a yellow and brown bugger with white rubber legs, it moved and hooked trout consistently throughout the entire day.

I caught fish right from the boat and when the wind started pushing, I waded flooded grass flats where trout cruised the light-colored bottom, likely looking for pancora crabs. The action was non-stop for hard fighting browns and a few rainbows tipping toward the 20-inch mark. Shale dog and I slept under the stars on a night that felt like spring turning to summer, crisp and cool, surrounded by mountains releasing snow and fields covered in lupine. Willing trout filled the next morning until the pace of the river quickened, requiring full attention on the oars until the takeout just above the border station and the summer ahead in Chile.