Rowing Through A Minefield: Mining, Tourism, and the Chilkat Watershed

A mining development is ready to explode just up the highway from the Tlingit village of Klukwan in rural Southeast Alaska. I check the area’s only radio station daily for reports about permits, lawsuits, and feuding townsfolk—all swirling around the controversial Constantine-Palmer Project—as I bump along in a box truck pulling stacked rafts down washboard roads.

Some will say that I’m just a raft guide, working six months of the summer rowing tourists from Ohio down glacially-fed rivers and that I shouldn’t be concerned about mining feuds that have been waged for decades. But, in a matter of years, gone goes my way of life if these mining efforts come to fruition. I’m trying to earn enough for a burger tonight and enjoy the remoteness of these Alaskan villages. Yet I’m afraid, in order to continue doing so, I’m also going to have to pick up a megaphone and fight to keep these rivers they way they’re supposed to be—wild and clean.

Haines, Alaska, located 21 miles down the Chilkat River from Klukwan, is famous for its tourism opportunities. Cruise ships bring tens of thousands of vacationers up the Lynn Canal to explore the remote coastal town each year. Multiple adventure flicks have featured Haines as a heli-skiing Mecca. But nothing draws more tourists than the Chilkat Bald Eagle Preserve, home to North America’s largest yearly gathering of bald eagles.

Rafting through this place is an almost ethereal experience as the locals—bears, wolves, and (of course) eagles—crowd the silty banks in search of true northern gold, Pacific salmon. Adventure companies make millions of dollars a year off of the tourism industry connected to the Chilkat, Klehini, and Tsirku rivers that converge in this preserve. Despite cries of alarm rising from the native village of Klukwan, the citizens of Haines, and concerned Alaskans up and down the coast, the Constantine-Palmer Project threatens to poison this confluence of subsistence, recreation, and wilderness. And I, a boater in awe of this Alaskan Valhalla, am crying out with them. 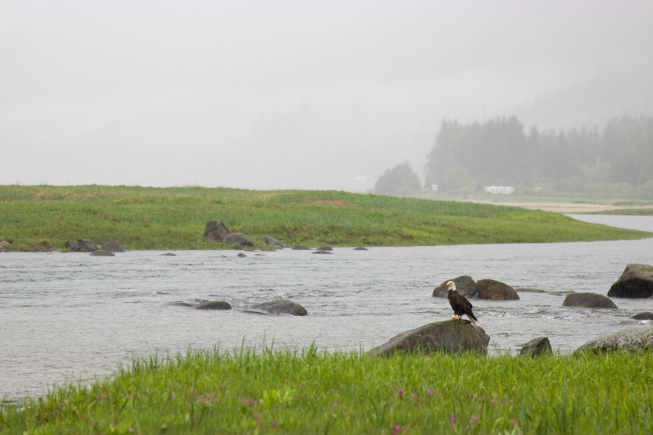 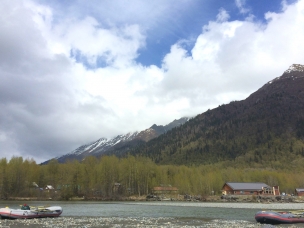 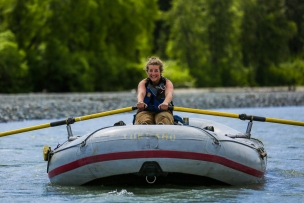 Josette rowing on the Tsirku River.

It’s barely dusk as I pull the company van up to the snow-melt spring running out of the side of a hill, but the clock reads 10:00 pm. We’re in the prime of summer, and 20 Boy Scouts wait for me to bring water back to base camp a few miles down the road. We’re rafting the day stretch of the Blanchard-Tatshenshini confluence tomorrow, and they need the water for early-morning pancakes. I hop out of the truck with jugs and wait for two locals already filling up. The clouds fade to pink over Mud Bay, lapping at the shore near the Rainbow Glacier. There are worse places to fill water bottles.

The Mud Bay Spring is where those with dry cabins (or tent-dwelling river guides) can collect water. It’s just two pipes sticking out from the rocks, nestled in a pull-off that you’d miss if you weren’t looking. But the water runs pure, unfiltered, and safe to drink. While I crack jokes with the pair about cruise ships and the strangely sunny weather this year, the Palmer-Constantine Project threatens these pure waters. 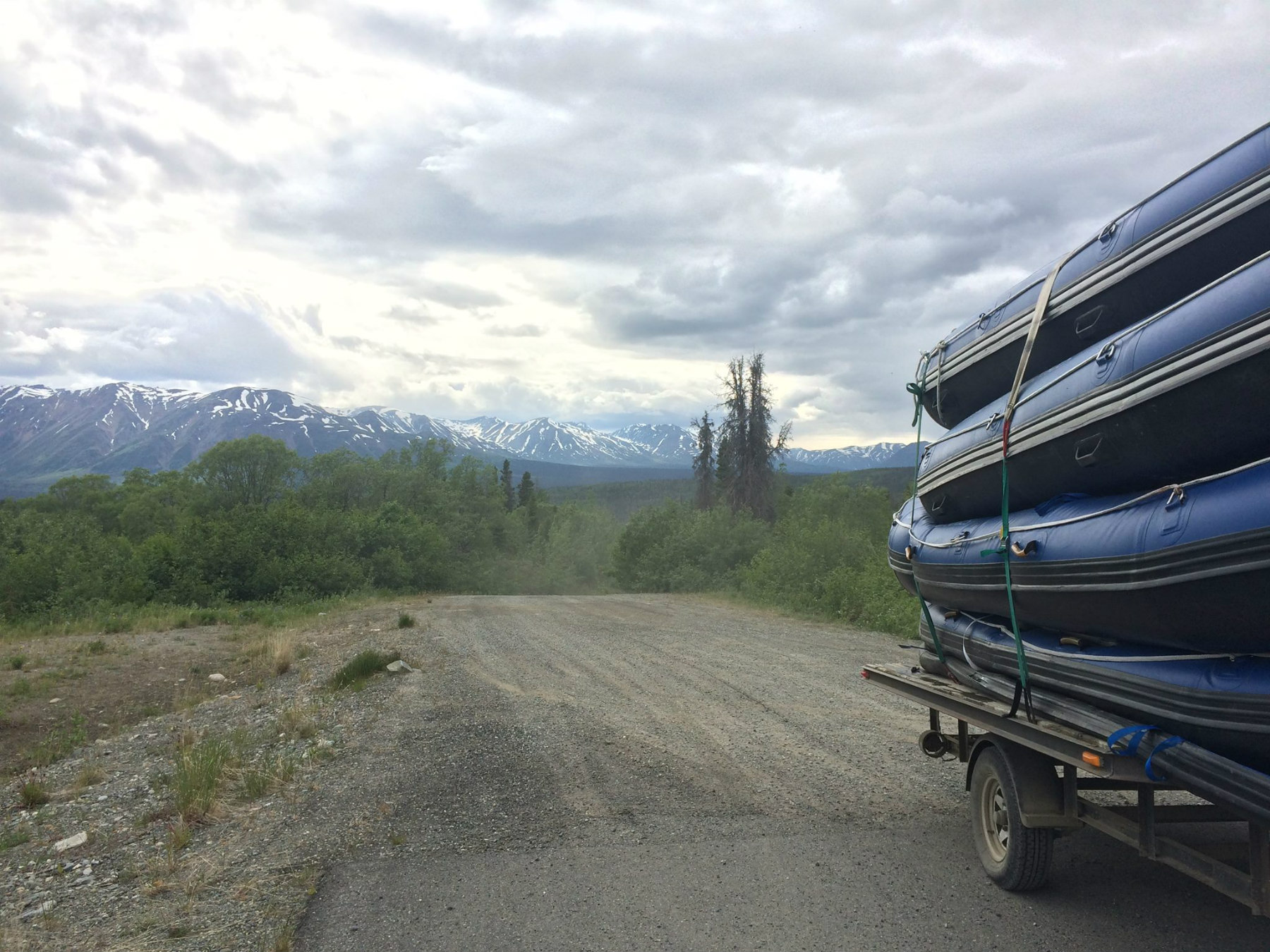 During the extraction and separation processes, explains Jessica Platcha of the Lynn Canal Conservation (LCC), the ore will be exposed to both air and water, which kickstarts a chemical reaction. The result? Sulfuric acid. “The Palmer Project is a high sulfide deposit, and such ore bodies are inherently polluting,” Platcha says. “The sulfuric acid leaches toxic heavy metals from the surrounding rock, which are washed downstream, contaminating the watershed. Even trace amounts of certain heavy metals can be deadly to aquatic life, including salmon. The mine runoff water can be hundreds of times more acidic than battery acid.”

Platcha would know. As a child, she drank water and fished in Idaho’s mine-polluted Lake Coeur D’Alene. All these years yater, heavy metals still affect her body. Even her child tests high for those heavy metals.

Not everyone in Haines, though, has lived near polluted water. And as much as the town thrives on tourism, industry built Haines. So, when Constantine promises a boosted economy, year-round jobs, and environmentally-friendly mining, plenty of locals listen. Why, a humble raft guide might ask? Because the town needs jobs.

Both the economic and environmental concerns held by Chilkat Watershed residents were addressed by the 2019 documentary, Rock Paper Fish. The townsfolk featured—amidst breathtaking cinematography of the Chilkat Valley—are people that I’ve drank with at the Pioneer Bar. The woman rowing an old bucket boat trained me in my first season rowing up north. While I don’t know all of the characters personally, I’d be surprised if we didn’t break bread at the next table over at the Fireweed restaurant or haven’t fallen asleep next to each other on the ferry.

These people are the lifeblood of Haines, and they’re divided. Some want to keep the town — and the rivers — the way it is, while others recognize that Haines needs economic security that the tourism industry might not be able to give. Right now, cruise ship tourism and fishing are Haines’ biggest sources of revenue. But what happens if one—or both—die out? 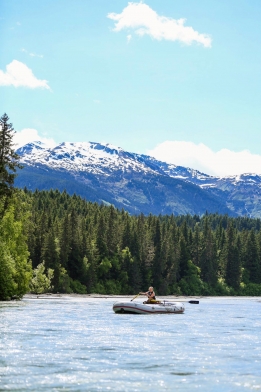 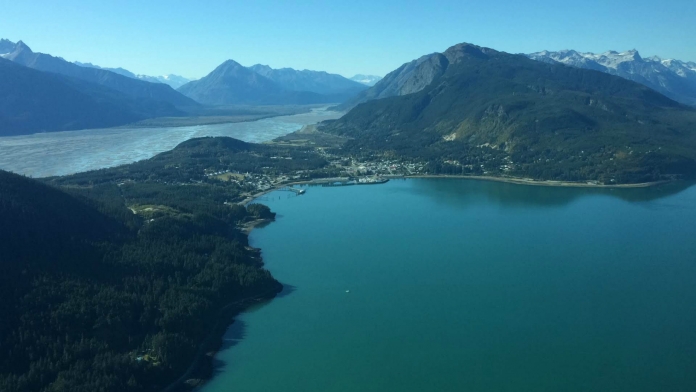 A low-tide Chilkat flowing freely behind the town of Haines, Alaska.

Jessica Forster summarized in the documentary, “[One] of the big social impacts, is that it tears the community apart. We’re so busy fighting that we’re not organizing ourselves to ensure that our needs, our priorities, are being addressed. What do we want our economic future to look like, and how much risk do we want to take on? That’s what Constantine is making Haines and Klukwan have to think about.”

Her husband, Kevin, worked for Constantine in its early exploration phase, and eventually quit. He argues that the Canadian company is genuinely doing a good job. But, he warns, at the end of the day, pressure will come from those with money invested. And is a businessman thousands of miles removed from the Chilkat Valley going to plan for and worry about the environmental fate of the watershed, of Klukwan, of Haines? “Of course not,” he says. “They’re going to do the bare minimum, as required by the law, and that’s not set up to protect us at all.”

Mark Kelly, a local business owner, is one supporter of the project. He’s excited about the job opportunities and economic growth that the mine could create. He also points out that alternative energies like wind and solar require immense amounts of copper and zinc, which the Palmer project intends to produce. “Since we do not get to choose where these deposits are placed, and this one happens to be in Alaska, I would much rather see this ore taken in a place where the workers are protected, the environment is a primary concern, and the local economy can benefit from it,” Kelly says.

What Kelly, and many other locals, don’t want is the in-fighting that this project has caused. “I do support the Palmer project 100%,” Kelly continues. “And I also support all of my friends and neighbors that are fisherman and self-proclaimed environmentalists. I want what is best for this valley and this environment.”

Others, like fisherman Tyler Botzon, are eager for those economic breaks outside of the tourism industry, but worry that the mining project may not be able to handle the environmental upsets that are commonplace in Southeast Alaska. “Haines is majorly vulnerable to seismic activity, landslides, and flooding, all of which do not bode well with the management of mine tailings… If something were to happen and there was a rupture in the tailings ponds, it’s going to be catastrophic… all the watersheds up there lead right into the Chilkat… is it worth it?”

Local organizations (like the LCC) scream warnings that would make even a hard-hatted miner blush. Heavy metal mines have been opened all over the world, with promises that the environment won’t be harmed—that it will be protected, even. To be fair, some have proven successful. Others have not, and the consequences are disastrous. 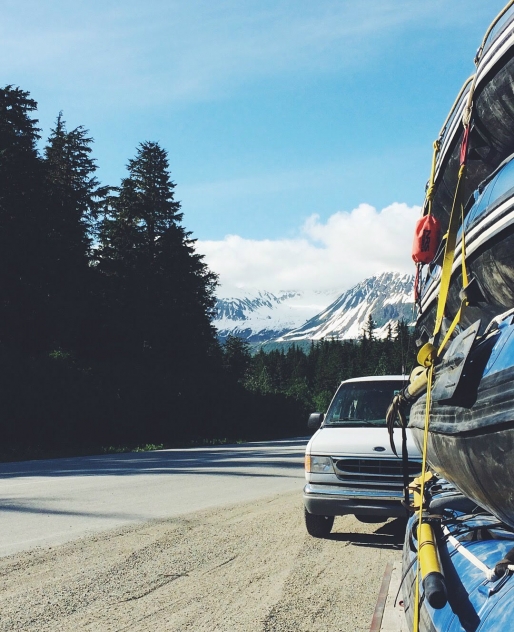 Loaded up trailer on the Haines Highway. Photo: Josette Deschambeault 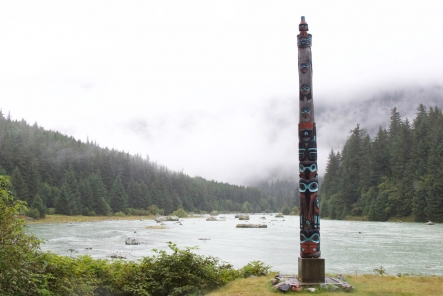 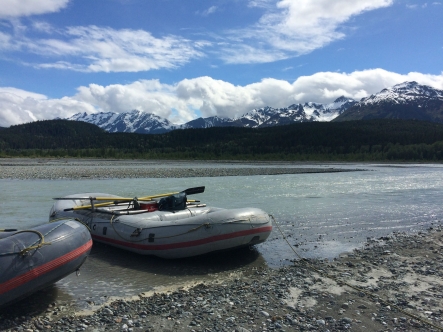 Brazil suffered far worse, with a broken dam in 2015 spewing 60 million cubic metres (2 billion cubic feet) of toxic mining refuse into the Rio Doce, killing 19 people, thousands of fish, and leaving 250,000 area residents without drinking water. It impacted around 416 miles of waterways. 2019 saw a second dam collapse decimating huge stretches of the Paraopeba River and the surrounding areas. Within two weeks, 166 people were confirmed dead, 200 were still missing, and 3,000 had been evacuated.

What if the Palmer project’s tailing ponds breach? If the wastewater spills into the rivers? If the leached metals find their way out into the saltwater? Any of these disasters could irreparably pollute Klukwan and Haines. Imagine the Pacific salmon disappearing from the Chilkat watershed as heavy metals leak into their waters. Subsistence fishing—which 89% of Haines and Klukwan residents rely on annually—would plummet. What happens when the bears, eagles, and marine life who rely on the salmon run leave for healthier feeding grounds? Haines’s fishing industry could crash as a result of a salmon famine. And how does Haines support itself when tourism, which relies on pristine rivers and wildlife tours and fishing trips, disappears?

The Chilkat River was named the sixth most endangered river in America on America’s Most Endangered Rivers because of all the environmental concerns surrounding the mine. In March of 2019, just months before the release of Rock Paper Fish, LCC, Southeast Alaska Conservation Council (SEACC), and the Chilkat Indian Village of Klukwan filed a lawsuit, arguing that “[the] BLM violated the National Environmental Policy Act, or NEPA, by failing to consider the impacts of potential future mine development when it approved the operation plan.” They lost. While no one is giving up the fight, the decision was a middle finger to those fighting the Palmer project. 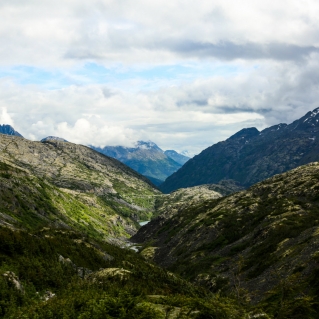 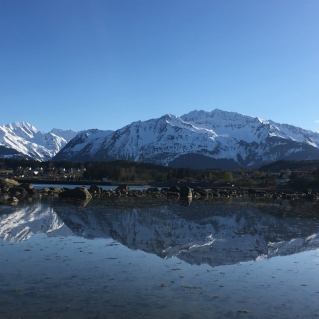 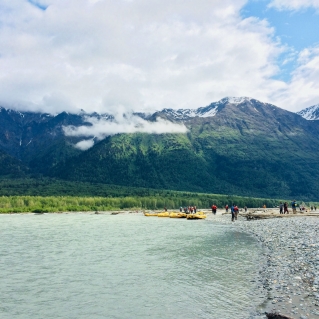 Bumping along the Haines Highway toward the Blanchard River with the 20 Boy Scouts in tow, I sip coffee from a battered metal mug and watch the three rivers tangle themselves in an early morning haze. We pass a bridge leading up to the Palmer project, which straddles where the Klehini meets the Chilkat. The Tsirku is somewhere beyond the trees. I point out a glacier between two peaks to the Scout leader behind me, and pause. This is the area where the Constantine-Palmer project plans to mine. My stomach lurches, and not from a pothole. This river valley is in danger, and here I am, driving by the proposed culprit, off to raft through another watershed that leads to the same coast.

I’ve only been in Alaska for three years, nowhere near long enough to call myself a local. I’m still a “seasonal,” even with a winter under my belt. I can’t claim to be impacted like the generations of Tlingits in Klukwan would be if the mine leaks into the watershed. Or if an oil tanker wrecks on the highway and spills into the Klehini. Or if the salmon, one day, don’t come back to the estuaries of Haines. 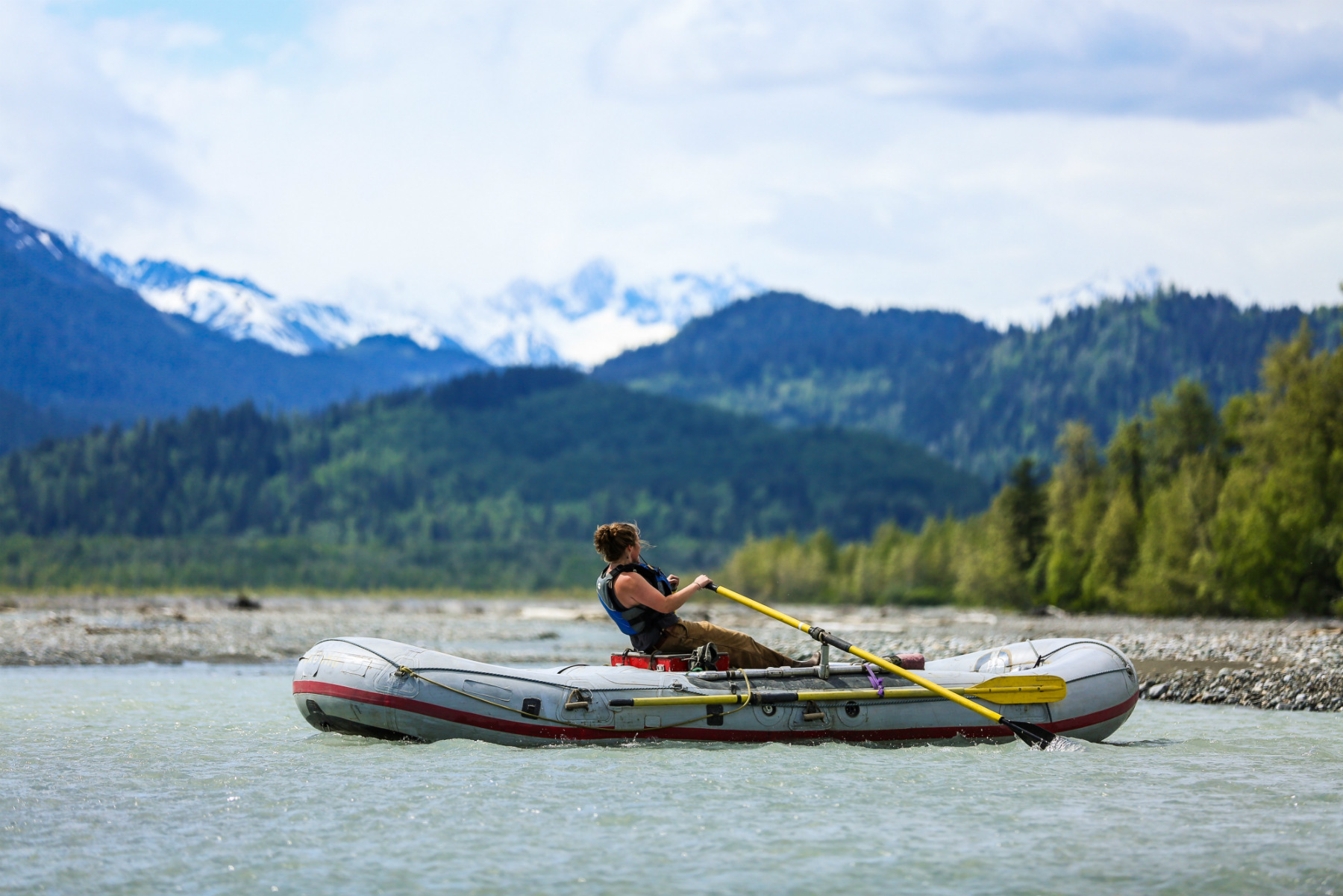 But, in my own small way, my living is tied to these rivers. If the waters fail, if the fish fail, if the town fails, if the cruise ships stop coming, guides lose their jobs. No one wants to come to Alaska to see a mudslide where there should be a bald eagle preserve.

I turn back to watch the last of the Chilkat Watershed slide out of view as we cross the Canadian border. Behind the stacked boats on our trailer, the valley looks untouched, pure, and wild. The kind of place you don’t mess with. But what would I know? I’m only a raft guide.