In southern Montana, the clear waters of East Rosebud Creek tumble through the bedrock of a world etched by glaciers. In the spring, icy runoff from the Absaroka-Beartooth Wilderness creates miles of falls and boulders which roar in an almost un-navigable tempest. At mid-flows, it piques the interest of every boater who has wondered if they’re ready for Class V. Low flows attract devout anglers hoping to outsmart several species of trout or the native Montana whitefish.

The surrounding valley is beautiful, much like other headwater areas throughout the state. Winter snowpack feeds the streams and alpine lakes and then waters the forests of aspens and conifers or feeds wide carpets of wildflowers thriving below talus slopes. The rugged terrain and fresh feel of the wilderness tempt tourists into exploring the hundreds of miles of biking and hiking trails of this watershed just north of Yellowstone National Park and the Snake River.

In the last twenty years, three different dam-building proposals have threatened this creek. Each time, overwhelming grassroots resistance and relentless, bi-partisan lobbying at the state and national level prevented the proposals from getting off the ground. The last time, in 2009, groups like American Rivers, Friends of East Rosebud and many other partners decided to go just a little bit further. Because of the dedication of many different organizations and individuals, on August 2, 2018, twenty miles of East Rosebud Creek received its Wild and Scenic designation.

One of the advocates who helped to preserve the unique character of this free-flowing river is Mike Fiebig. At the time, he worked for American Rivers as the Conservation Director of the Northern Rockies Region.

“East Rosebud Creek was the first Wild and Scenic River designation in the State of Montana since 1978,” Mike shared with me from his new home in Durango, Colorado where he recently stepped up to the role of Director of River Protection for the Southwest. “Water is a necessary part of the river, but it’s not the only part. To have a river, you need an ecosystem that’s free-flowing up and down its length and across its floodplain.” 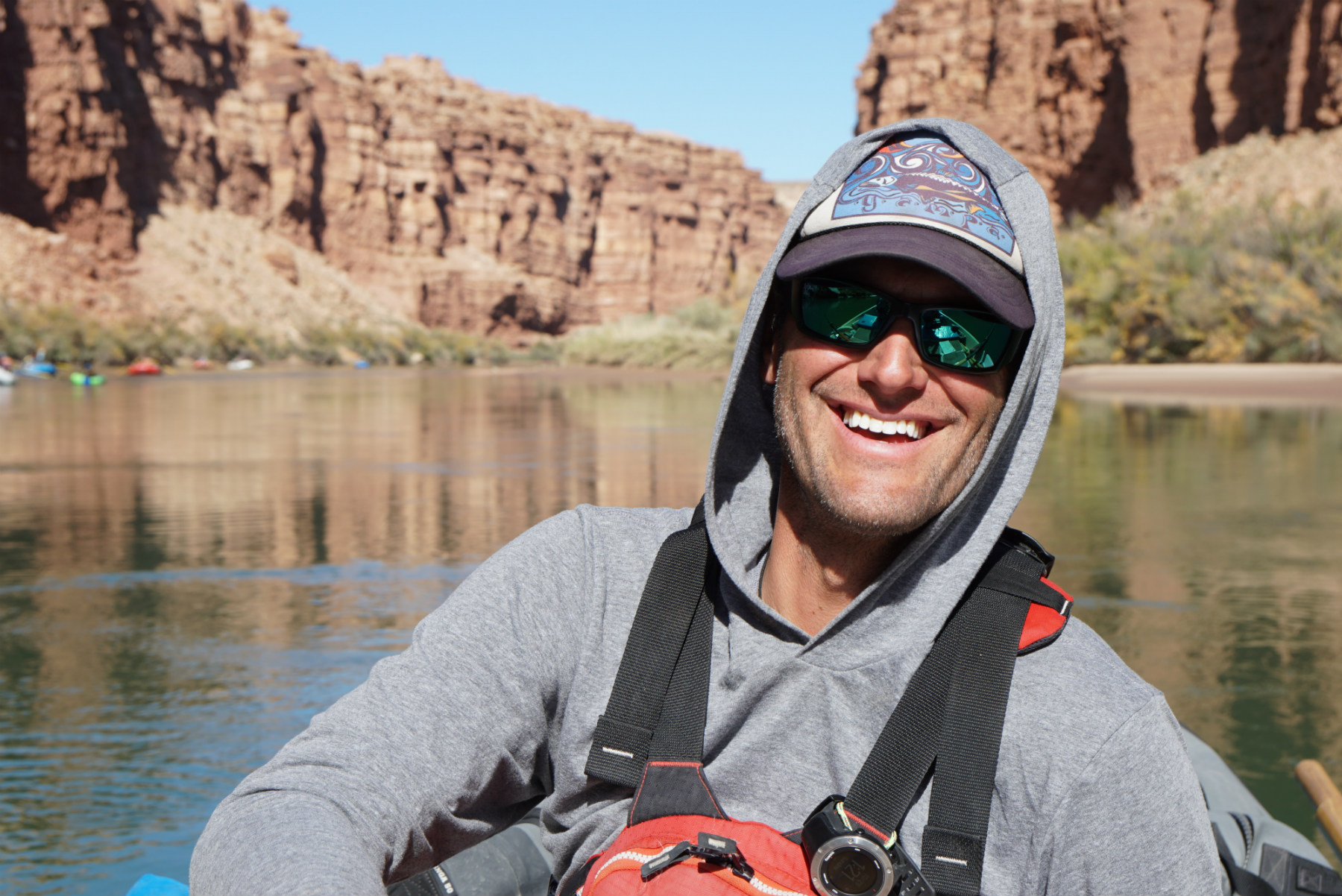 As a Federal Congressional designation, Wild and Scenic is the strongest protection a river or waterway can receive in America. The designation not only prevents all potential dam-building threats, but it also protects the unique characteristics of the waterway, ensuring a healthy aquatic eco-system and water quality for those that depend on it.

Mike has spent nearly a decade advocating for protecting our ‘last, best, rivers,’ their floodplains and all the lives they connect. Of course, not a man to rest on his laurels, when East Rosebud Creek was officially protected after a presidential signature, and the ceremonies and celebrations took place, Mike was not present for any of it. He was deep in the wilderness, floating the Green and Colorado Rivers on a five-month-long source-to-sea journey with his wife, Jenny, and their dog, Emma. 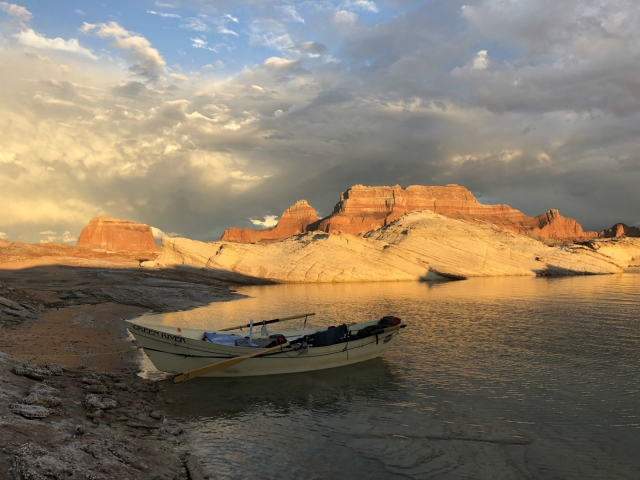 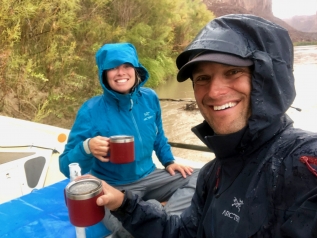 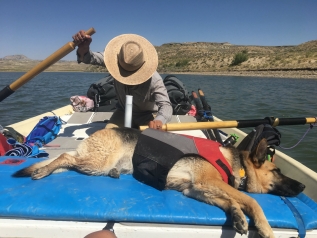 The wilderness rivers and the politician’s office may seem to be two places in different universes, especially to those of us who would rather not be caught dead in one of them. Yet more and more devoted riverfolk, like Mike, find themselves changing hats, shirts and shoes between them on a regular basis. His passion for protecting rivers often takes him from rugged canyons to Washington conference rooms and back again.

“Though in any given year I find myself both wearing sun-bleached shirts, rowing boats and sleeping under the stars for days on rivers, I also have to shave and put on a suit to visit DC now and then too. But the folks that do this never really feel far from rivers I don’t think, because we are telling stories about them and advocating for them at the same time. Under my dress shoes, my feet are still cracked and sporting a Chaco tan.” 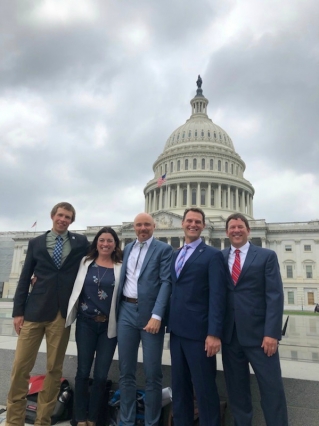 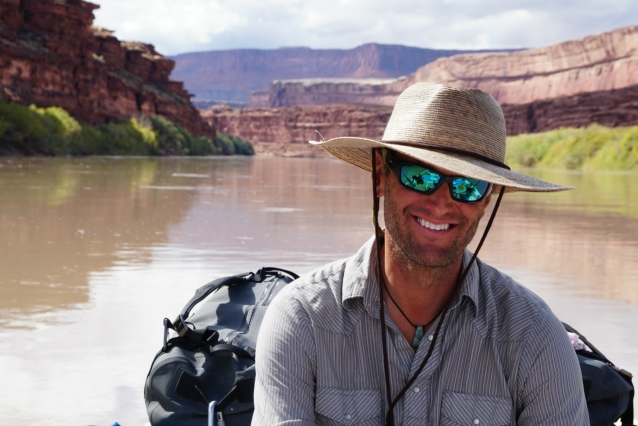 Growing up in Rockford, Michigan, near Grand Rapids, Mike Fiebig was surrounded by water. Yet when he finally moved West in 1998 to attend graduate school at CU Boulder, it was mostly because of a “rock-climbing problem.”

In his first year, he accidentally stumbled upon his life’s calling when, on a whim, he signed up for an interview to be a guide with Wilderness Aware Rafting on the Salt River over spring break. The ‘interview’ was more like an audition. Mike paid $120 to cover the cost of the trip, which covered transportation to and from Colorado to the Salt, food and guide training over the next five days. After the trip, WAR offered him a guide position.

“[After that summer,] I realized that the education I really needed wasn’t in school, it was on the rivers.” And he withdrew from graduate school.

Over the next three years, Mike dove into the river guiding circuit. He stuck around Colorado for the summers, guiding on the Arkansas River and high country headwaters; headed east for Gauley season in the fall; Big Bend and the Rio Grande via canoes in the winter; and worked as a river ranger on the Salt in the spring.

During this season of his life, he got to know each of these rivers in a very personal way. Learning their unique attributes and ecosystems through immersion (no pun), was what gave him the clearest picture that something was, in fact, very wrong with American rivers.

“My first seasonal work on the Rio through the Big Bend area was guiding multi-day trips for a local company, Far Flung Adventures, while renting a place in Terlingua. That’s when I first learned about the myriad issues facing the river down there. Driving through El Paso to Big Bend, the river would run dry between Elephant Butte Reservoir until it was joined by a tributary, the Rio Conchos, from Mexico.”

In the east, too, he witnessed what he describes as a break in the hydrological system. “I watched the Gauley River being turned off and on like a faucet. A lot of places I loved were living on a thread.”

In 2001, Mike took a position as a NOLS Instructor teaching expeditionary rafting, kayaking, canoeing and other skills year-round throughout Utah, Idaho, Texas, Wyoming, Arizona and Arkansas. During the next five years, he witnessed the boom of oil and gas on the Tavaputs Plateau, and the devestation it wreaked on the wildness of Desolation Canyon as well-pads and access roads disrupted more and more land, threatening the watershed. This experience was an eye-opener. He needed to do more.

With this perspective, knowing personally how high the stakes were, in 2006, Mike returned to graduate school at the University of Montana for a degree in Natural Resources Policy and Conflict Resolution. He stayed on as a NOLS Instructor for the summers, working on the Salmon, Green, Yampa and Owhyee rivers.

The strange fact is that often, he suggests, the most powerful rivers are the ones that need the most protection. The last, best rivers, as they are often called, the ones still free-flowing and healthy, need proactive protection because by the time a community can rally against a dangerous proposal, it’s often too late. The mechanisms of politics mean that by the time a credible threat exists, the money has been spent and the wheels are greased. That’s why the Wild and Scenic designation is so essential. 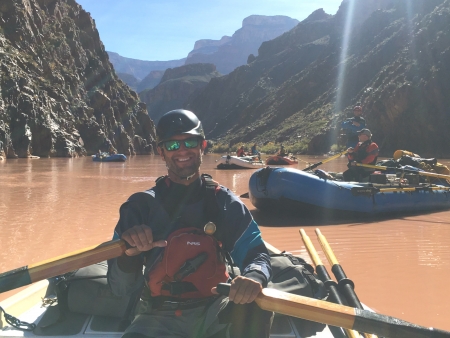 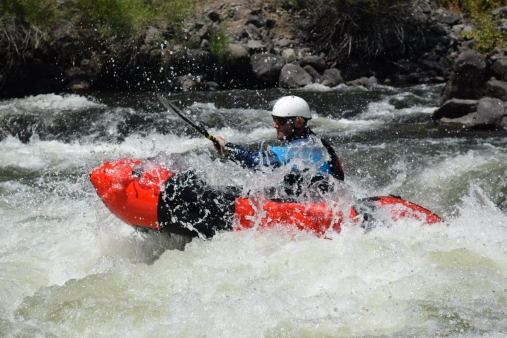 After earning his Master’s degree, Mike took a position as a Presidential Management Fellow in Yellowstone. He worked for almost two years on a plan for Climate Action in the National Parks before landing his first position with American Rivers as the Wyss Conservation Fellow and Montana Coordinator where he started work on East Rosebud Creek.

Mike’s job has introduced him to hundreds of people who are dedicated to the same love of rivers and healthy, wild places. He finds himself on any given day working with non-profit leaders, local guides, political aides to congressmen, ranchers, mayors, and volunteers from all walks of life. Nothing would happen without all of them.

Mike now stands as Director of the Southwest River Protection Program for American Rivers out of Durango. He’s facing even greater challenges as he looks for ways to speak for free-flowing rivers in a basin where there is, as he puts it “more paper water than wet water.”

In fact, as the Colorado River Basin negotiates Drought Contingency Plans, listens to the whispers of a Compact Call, and tries to still hold onto healthy river systems, Mike believes that many more voices are still needed.

“In a democratic system, we have to have constant engagement to protect what we love. People need to realize that what they value won’t necessarily stay the way it is without engagement. It can look a lot of different ways, but people are going to have to do it.

Recreationists are natural conservationists, and that love comes with a responsibility even if it’s self-serving.”

He recommends getting involved with local conservation groups right away, not waiting until the headlines bring attention to a new dam or drilling proposal, “Once a credible threat is proposed, it’s almost too late—too much money and resources are poured in. Being proactive is where the bang for the buck is.” He hopes to see more and more average Americans, especially boaters, realize that their voices are needed and that the time is now. 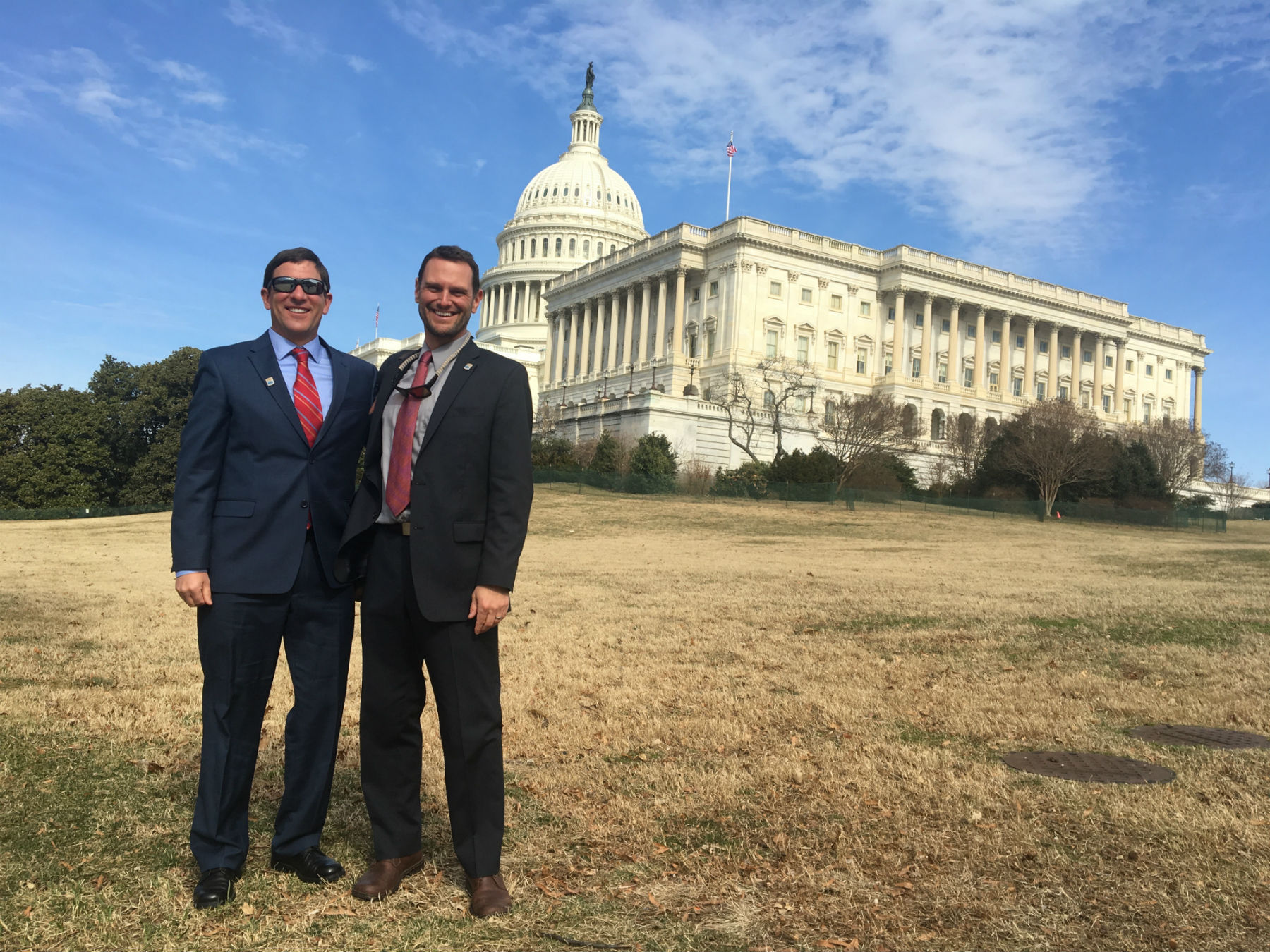 Mike and Jenny, still take every opportunity to explore the wild rivers around them, and bring Emma along whenever possible. And he’s lucky to work with an organization that sees value in an adventurous sabbatical like the One River Expedition, a human powered source-to-sea on the Green and Colorado, from the crest of the Wind River Range in Wyoming to the Gulf of California in Mexico.

For the majority of the trip, they rowed a dory purpose-built to handle this style of expedition. The main purpose of the nearly 1,700-mile, five-month journey, aside from the adventure, was to capture stories of the people’s connections to rivers along the way and to paint a current picture of the culture and connections surrounding the Colorado system. 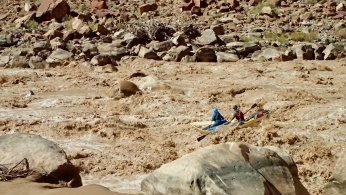 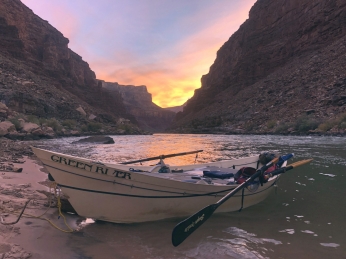 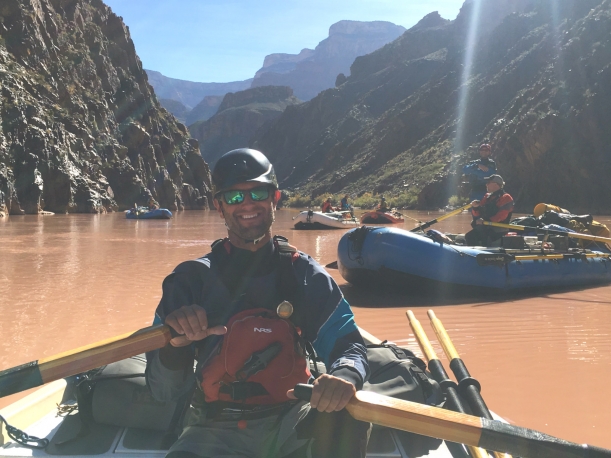 “One thing that I learned from the interviews that we did during the trip is that people up and down the Green and Colorado rivers, regardless of their background or political affiliation, have a deep love and connection to the river,” says Mike. “Almost everyone became teary-eyed at one point during our interviews when they talked about what the river meant to them.”

The future of our rivers and their ecosystems doesn’t have to be negative. Mike believes we can still make a huge difference for the unprotected rivers that are most important to us. “But with the prospects of climate-induced drought, overallocation and booming development, we had better get moving.”