A Creative Guide to Paddling Closer to Home

Have you ever driven past a certain body of water—possibly for years—without giving it much thought? Maybe you’re a whitewater paddler and this hypothetical waterbody you’ve ignored is a lake, coastal inlet, or flatwater river that’s on your weekday commute. You never really considered it something worth paddling. Until one day, you glance out the window and wonder, why have I never paddled that?

This spring, the pandemic caused canceled trips, the closing of popular access points, and gateway communities grew concerned about incoming visitors. Many paddlers began searching for options closer to home.

Some are lucky to live in a paddling hub with plenty of world-class options, like Asheville, North Carolina, Salida, Colorado or White Salmon, Washington. Others, like me, have never been so lucky. Living far from your favorite paddling trips can require creativity to get some afternoon strokes. Never one to stop looking for places to paddle, here are a few tricks I’ve learned to find, or rather see the potential for, new paddling spots. 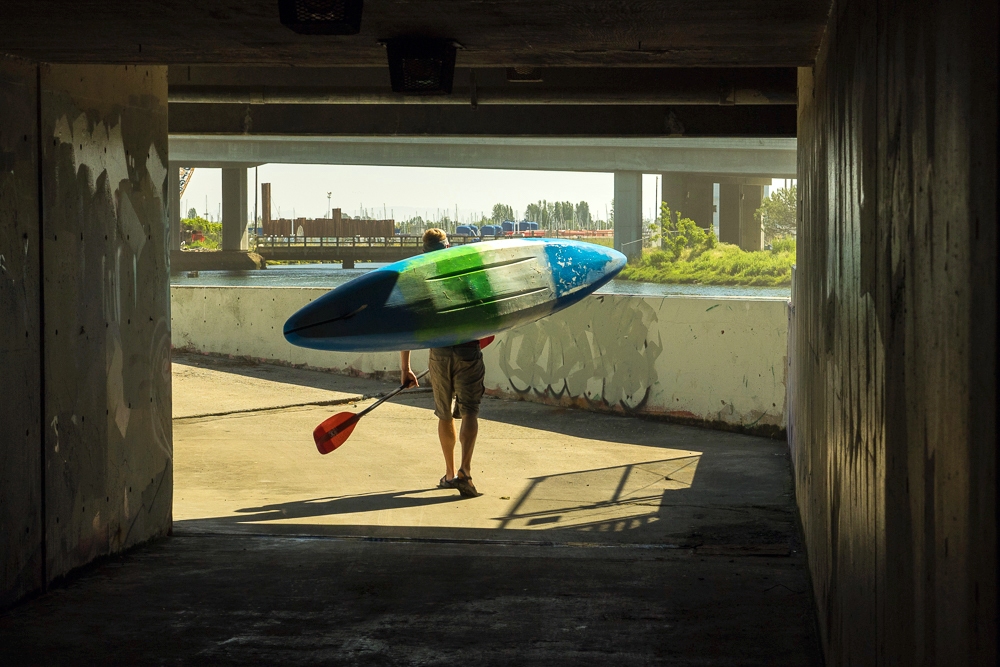 Abandon All Assumptions.
A few years ago, my wife and I relocated to a whitewater paddler’s worst nightmare—or so it seemed—the Low Country of South Carolina. It’s a scenic region of sandy plains, blackwater swamps, and longleaf pine forest, but easily the flattest place I’ve ever lived. Our neighborhood is near a bluff, which is marked by a single 20-foot topo line that folks around here call “high ground.”

While there’s plenty of surface water, I assumed all the rivers must be the same—so why bother exploring the region? Not knowing much about tannin-colored blackwater, alligator habits, or tidal rivers (where current backs up behind incoming tides for dozens of miles inland), I started taking a paddleboard upstream from town, where I’d rarely seen other paddlers. I learned that floating logs look a lot like alligators to the untrained eye, and one time a floating alligator looked a lot like a log before I turned and hightailed downstream. Each time I returned, I went a little further, but I never strayed more than four miles from town. 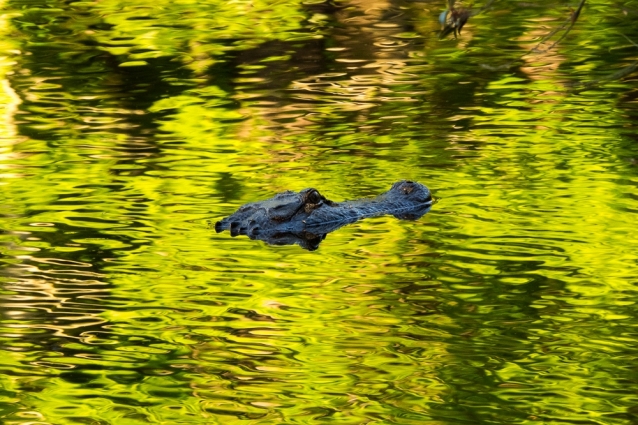 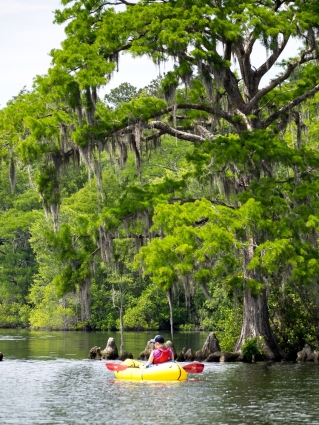 Two years passed before a friend jolted me out of my complacency with a tip, and I realized I’d been skipping past some pretty cool trips. A few weeks later, I bike-rafted out to Cumberland Island National Seashore and discovered how fun it is to tour and camp on barrier islands. Eventually, my wife and I were paddling tidal creeks that switch directions, exploring wilderness swamps, inlets, and sounds. This got me studying the map. I realized the National Wild & Scenic Lumber River was less than an hour from our place, just over the border in North Carolina. But no one in our town seemed to know about it.

In the past year, I also learned about some mysterious lakes with a funny name. Called Carolina Bays, these elliptically shaped basins all point the same direction, from northwest to southeast. There are hundreds of them spread across Low Country. Though most are seasonal marshes that dry out, others are minimally developed or near-wilderness lakes, like those in Bladen County, North Carolina.

The best part of paddling a Carolina bay is the mysterious origin story—no one is certain how they formed. Probably sea level change and winds, but one extraterrestrial theory involves a comet impact. When I mention the bays to other people, most assume I’m talking about ocean inlets and they dismiss them with a shrug. Their loss. A half-million Carolina Bays stretch from Florida to New York, with some offering creative paddling options close to the homes of millions of Americans. 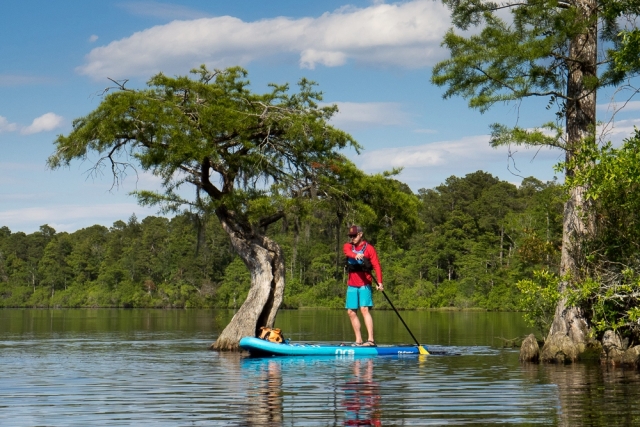 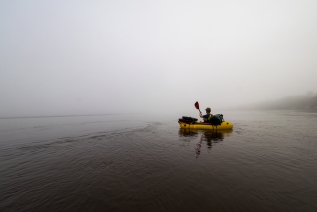 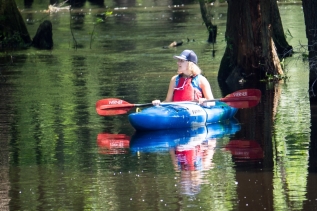 Embrace the Forgotten.
Before Low Country, my wife and I met and lived in St. Louis for ten years. Early on, I learned about the class II-III Saint Francis River in the Missouri Ozarks, and I paddled there many weekends each spring season. We regulars knew a few other options, including some steep tributary creeks within the watershed, but otherwise, this was our local whitewater scene.

Also popular are float streams—too many to list, actually. But most of us focused on the best-known floats near the Saint, like the Current and Jacks Fork in Ozark National Scenic Riverways. The assumption was that if something else wasn’t widely talked about, it probably wasn’t worth checking out. Clearly, paddlers had already gone and long ago dismissed the run as not worth it. Right?

Wrong. The Ozarks have so much flowing water—from runoff and limestone springs—that it’s impossible to remember every run. For example, one winter day, my buddy and I hiked our boats up from the Saint into a drainage called Turkey Creek. We’d heard about it vaguely but didn’t know anyone who had paddled it in years. We found a short but great class III-IV creek run that was right under our noses for years. This opened my eyes. 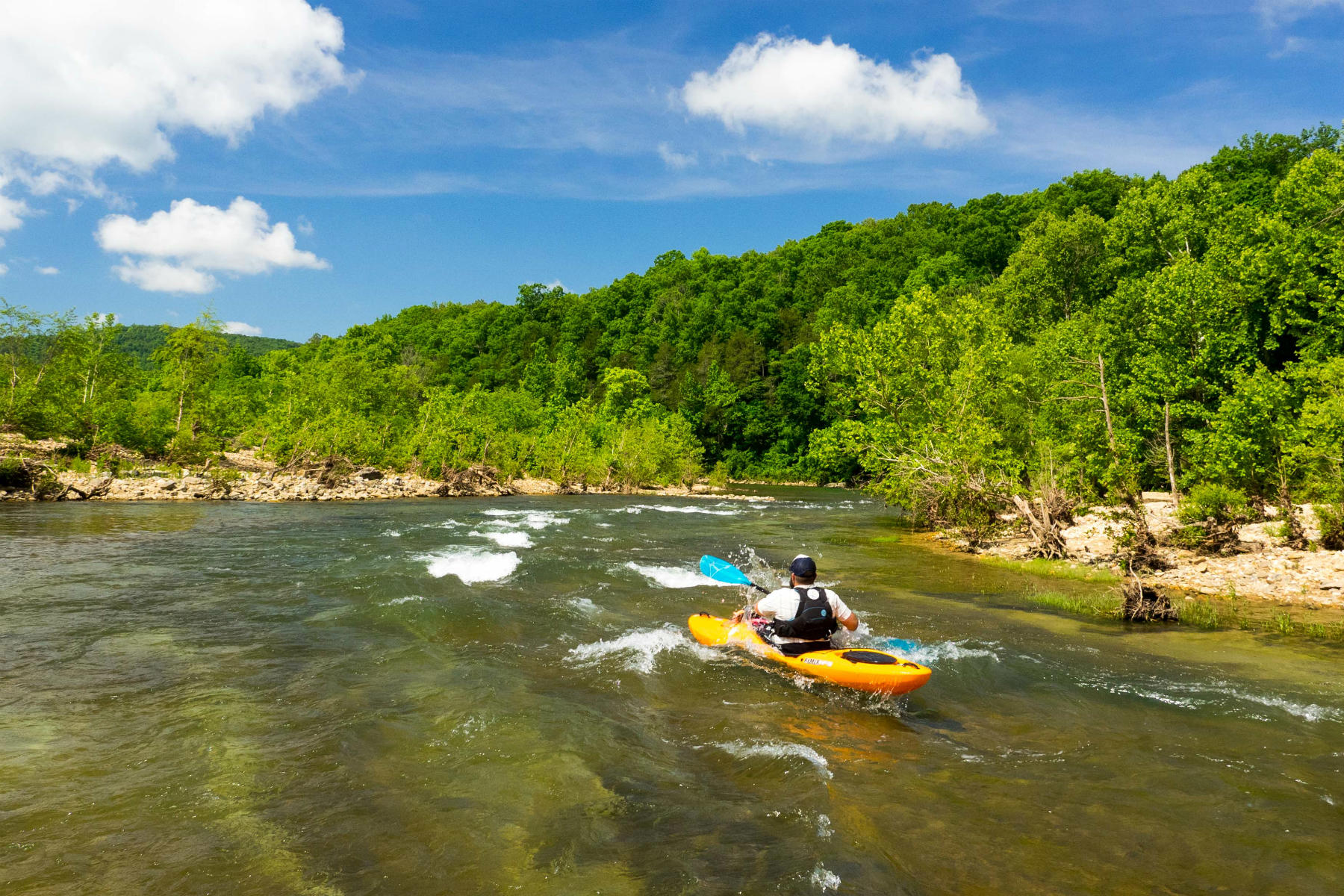 When I drove bridges over other Ozark rivers, I began to stop and look around. I loaded up maps and started zooming. This led me to more Ozark paddling than I knew existed. Headwaters creeks, easy but fun whitewater, and bluff-lined shut-ins (an Ozark term for miniature gorges), like those on the Buffalo National River.

An old-timer told me that, at one time, the National Wild & Scenic Big Piney Creek in Arkansas was a favorite class II-III springtime run. Paddlers came from across the Ozarks. But as the focus shifted to runs near metro regions, like the Saint, and traveling to harder rivers in other regions, most had forgotten Big Piney.

When I came home all smiles from the forgotten gem of Big Piney Creek, in the southern Ozarks of Arkansas, most friends thought I was talking about a class I-II float stream called Big Piney River in the northern Ozarks of Missouri. Forgotten due to a case of mistaken identity. 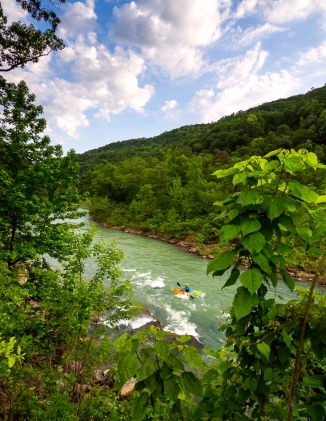 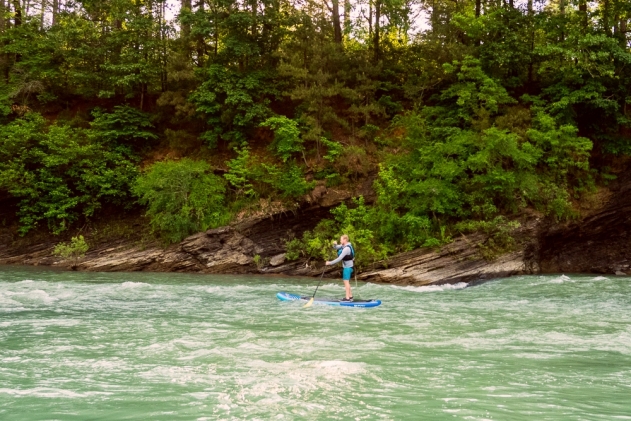 Try Urban Paddling.
At the northeastern edge of the Ozarks, other friends were on a mission to paddle every urban creek around St. Louis. I joined a few times, luging down wave trains behind neighborhoods. Sometimes the runoff had a tinge that I wasn’t crazy about. But sitting in a boat for an hour still beat sitting behind a desk watching it rain. So, I quit work early and, afterward, stayed in the shower late.

Even more surreal was playboating at the class III Chain of Rocks within sight of the St. Louis Arch, the only exposed bedrock below the Twin Cities on the Mississippi River. Other times, we checked out suburban lakes. 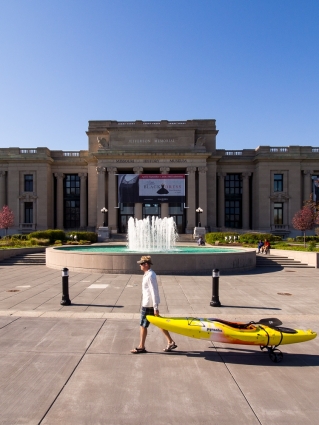 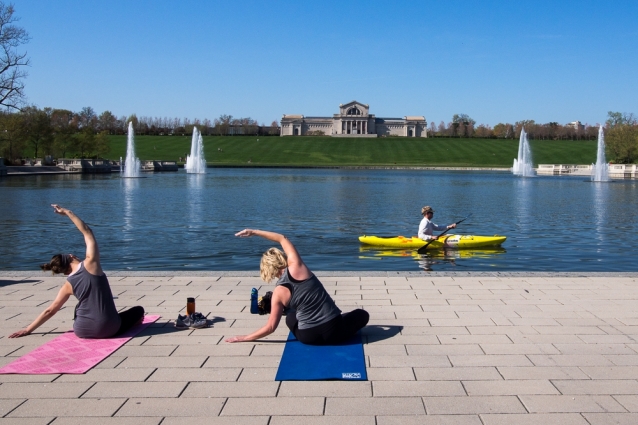 Paddling these spots got me wondering if there were other types of urban waterways even closer to our urban apartment. One day, I launched my kayak into the Grand Basin of Forest Park. I paddled between fountains past the art museum, following the former channel of the River des Peres, which was incorporated into the 1904 World’s Fairgrounds.

I’d watched pedal boaters for years. Why should they get all the fun? No one said anything, but I later learned it’s forbidden to bring your own boat. I guess other paddlers kept coming or asking, because today, you can rent kayaks and paddleboards.

When you’re a continent crossing dirtbag like me, you stay with family and friends a lot. On another urban paddling trip, a friend and I paddled near where we grew up. From the bay up a tidal channel into Lake Merritt in Oakland. I researched the regulations closely. You can bring your own boat if you pay a few bucks. It’s legal if you go from the bay to the lake, but illegal if you go the other direction, because…? Urban paddling has lots of rules.

Ditch the Crowds.
When working in Utah, I’m often in the canyonlands region for months. Finding new paddling trips in this remote and inaccessible desert is tough but not impossible. The Colorado River through that area has some great runs, including class II Ruby-Horsethief, class III-IV Westwater, class II+ Moab Daily, class I Meander, and class IV-V Cataract. All great and popular trips, with the first three being the most crowded due to shorter length and easy access to town.

Nearby, there’s a similar river that receives a fraction of the attention. One reason may be that it doesn’t carry the romantic name Colorado. Yes, the Green River is more remote, with fewer access points on dirt roads, and slightly lower gradient. The trips are a bit slower, longer, and therefore more mentally challenging. But the Green holds its own.

For example, the Green River Daily is eight miles of class II+, with a dirt road running alongside for easy shuttle. The scenery through Gray Canyon is a bit stark but still impressive when compared to the reddish rock near Moab. You can find12 and 20-mile day trips downstream through a wide valley, followed by a pair of 50-mile flatwater trips through stunning canyonlands, which can be completed in three-four days. This is definitely a selfie river. Not as in photos—you’ll be half-covered in silt. By selfie, I mean you’ll have it mostly to yourself. 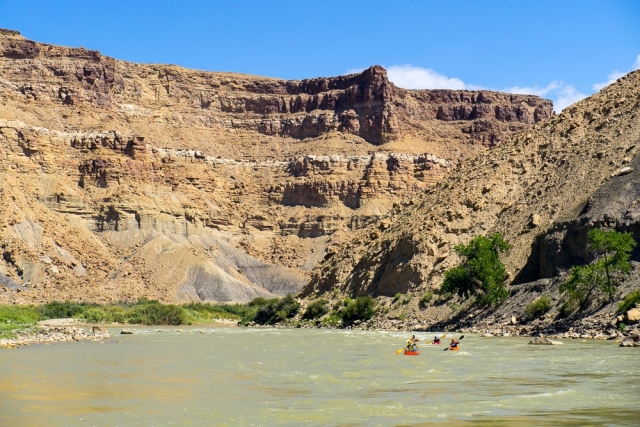 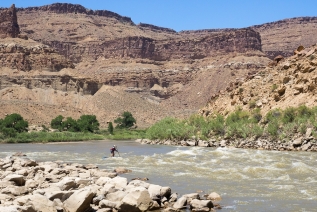 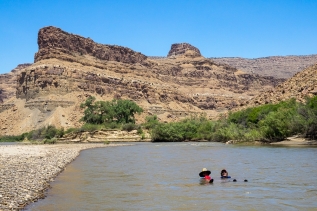 Quit Asking If It’s ‘Cool.’
There’s a question I often hear from paddlers about places they haven’t paddled: is it cool? As in, is it worth paddling? (As in, will paddlers date me if I’m seen there?)

The problem with this question (other than it forgets that paddlers will date almost anyone once) is that it substitutes someone else’s opinions for your own. It lets you off the hook from going and finding out for yourself.

I’m not saying don’t gather info about a run before your first trip, especially details related to hazards. But instead of asking if it’s cool, which is vague and subjective, try asking, what is the run like—What are its qualities? How long does the trip take? How is the current? Can you describe the scenery? The access? The rapids? The difficulty? The nightlife? These answers will hopefully be more descriptive and helpful. 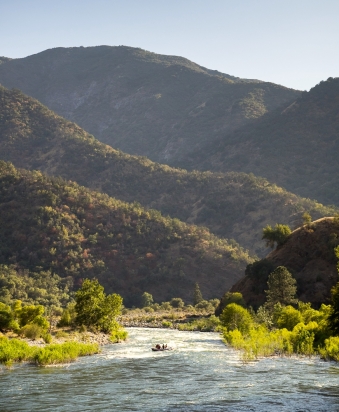 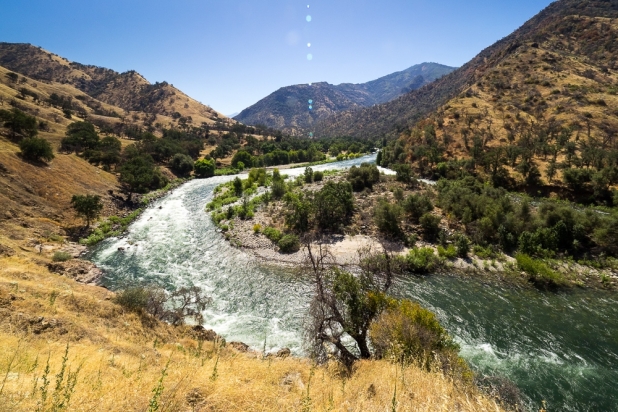 Ditching the cool question worked out perfectly for a buddy and me recently. We used to be raft guides in the Sierras, but we’d never been to the Bonzai Run on the Kings River in Northern California. Years ago, someone told us it wasn’t really worth it. Instead of questioning the dismissal and going for ourselves, it had fallen from both of our radars.

Finally, fifteen years later, we discovered a great summer weekend trip that we’ll definitely be paddling again. In August of a highwater year, we were the only kayakers on that section, paddling 4000 CFS of natural flowing class III. A fun splashy blast of a weekend. With air temps in the 100s and the water being snowmelt, it was literally the definition of cool.

I’ve paddled a lot of unexpected places that yielded great trips but rarely appear on many bucket lists. Often, I was guilty of not noticing them until suddenly something clicked. Sometimes I was clued in by others. Other times, I stumbled across the place on a map or in person. Sometimes these trips were whitewater, but more often they weren’t. Regardless, they were all worth it.