Being a Good Boater Can Make You a Bad Boater

This spring my younger sister told me that she and my father had signed up for a rowing clinic on the Rogue.

Not gonna lie—this felt like an insult. Hey, what’s wrong with me? Hello, I’m a good rower. Me! You know… your brother. How about you save a thousand bucks and let me teach you how to row? And in some ways, this was like a double insult because I’m a teacher by profession. 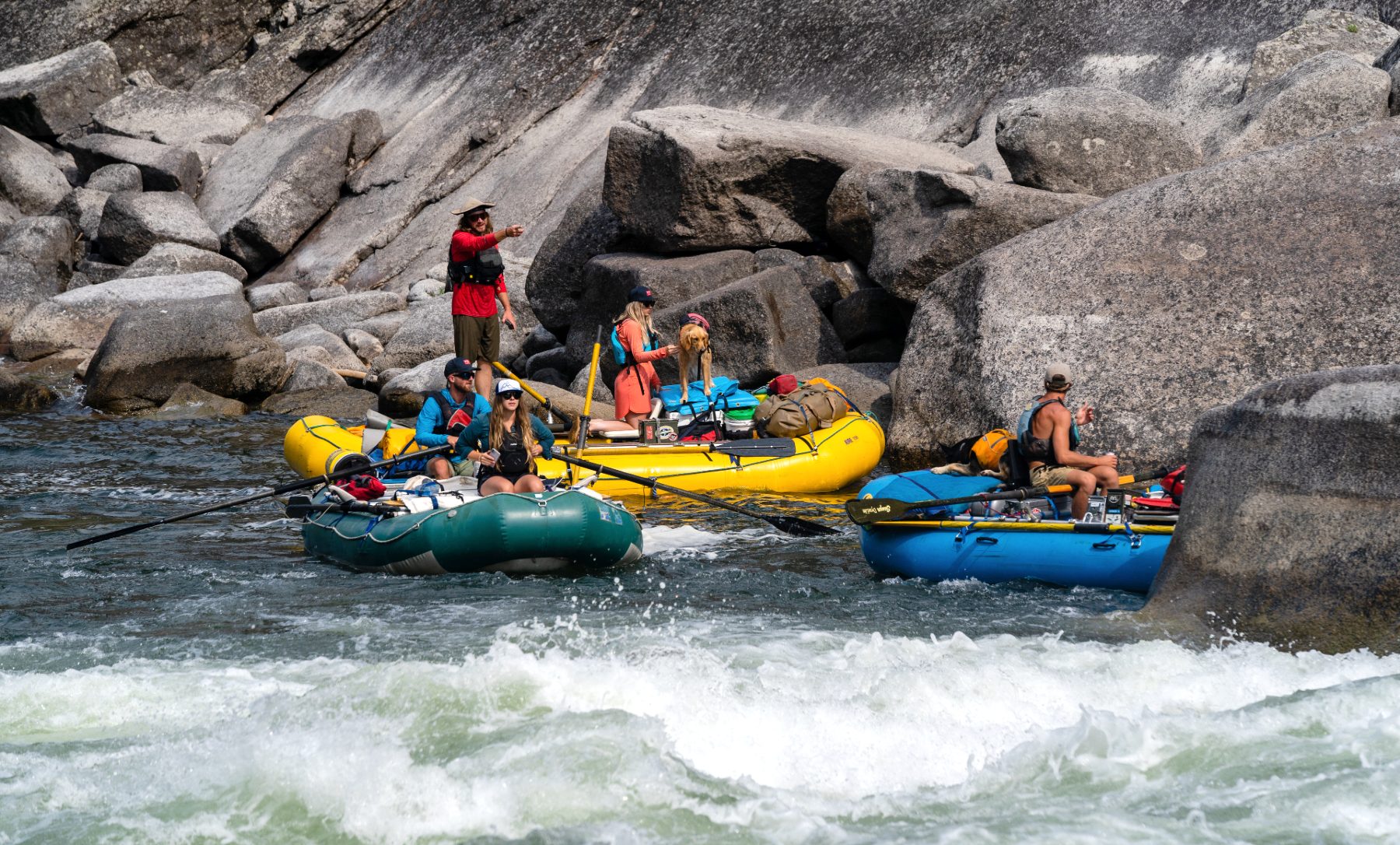 To my sister’s credit, she demurred with a comment about how hard it is to learn something from “family” and then just changed the subject, after all, they had paid the fee and the deed was done.

Obviously, I haven’t let it go.

But I have decided that she’s probably right.

She and my dad will learn more at a clinic than I will be able to teach them. And between her snub and the memory of a couple of scary incidents last summer, I’ve begun to realize that becoming a good rafter has, in some ways, made me a bad rafter. 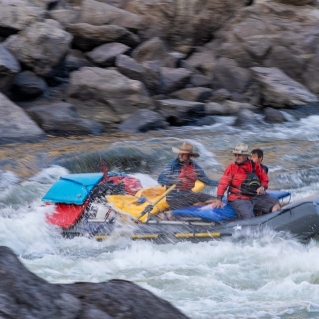 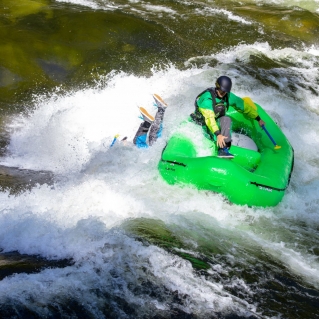 Give me the whatchamacallit!
Launch day is chaotic enough without trying to give a newbie an equipment lecture. No doubt the boat ramp is hot and other groups are waiting for you to move your boat. I have been guilty of ignoring questions about what a piece of equipment is called or how it works. I’ve let people get away with repeatedly calling “oars” “paddles” and “paddles” “oars.”  And while that distinction isn’t life or death, the difference between a throw bag and dry bag might be.

This summer I’m going to make it a point to answer more questions about gear. I’m even going to let someone else help me load and rig my boat. Securing a load so that it won’t yard sale all your gear in the event of a flip is more an art than a science and people often need to learn by doing. And while I don’t ever forget the safety talk, I’m going to make it more thorough and comprehensive. 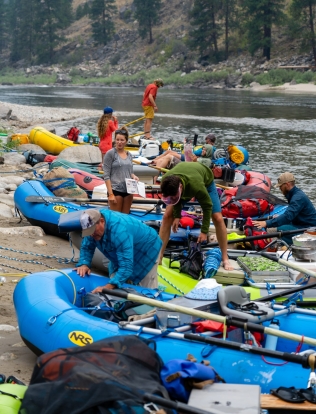 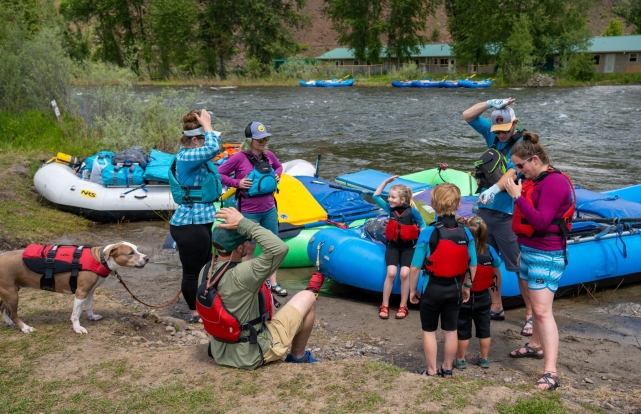 Boy Scouts Shmoy Scouts!
When you first start boating you bring everything including the kitchen sink. For one thing, you want to show off your gear and for another, you have no idea what you really need. Then there comes a period when you’ve boated for a few years and you’ve come to realize that you have never used a number of things. But here’s the thing—never ever is only almost never ever. I’m all for leaving that heavy firepan at home on a hot desert trip. But don’t forget extra cold-weather gear just because it’s June. June on the Middle Fork of the Salmon is not June on the San Juan. I’ve had someone give my own daughter an extra jacket because I didn’t have one to give her. Embarrassing. Way to go, Dad! 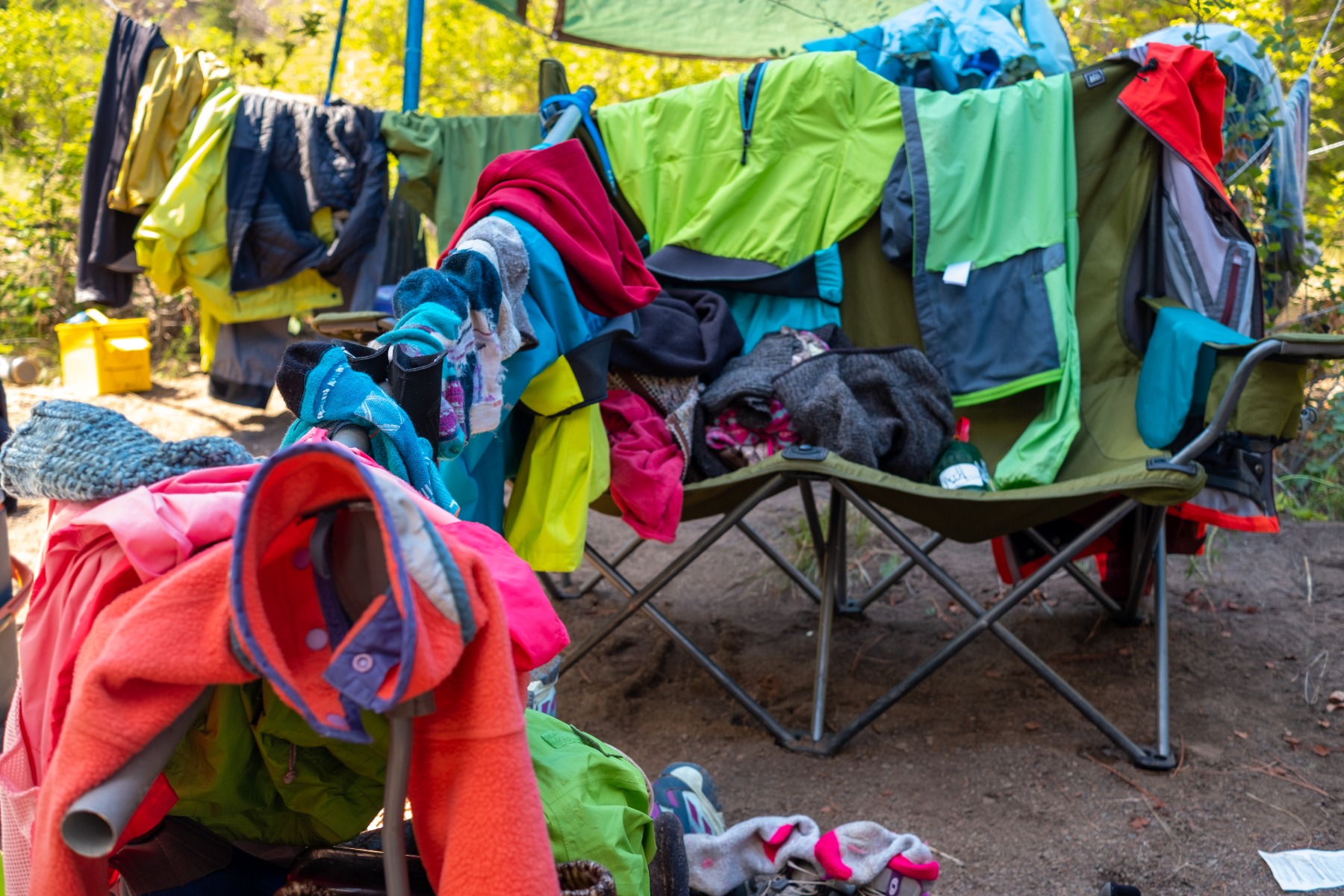 It’s all in the wrists—but not really.
I have a friend who went with me on a trip down to the A-B-C section of the Green River below the Flaming Gorge Dam. On day two, he wanted to row a small class III called Redside Rapid. It’s a little bony but fairly straight-forward left center run. As we scouted, I gave him instructions: “Row off this rock at this angle and then point your boat here.”

He looked at the rapid from every possible angle and then decided not to row it. He would watch me. Somewhere in the middle of the rapid, I made a stroke that wasn’t part of my original instructions. “What was that?  What did you just do?” 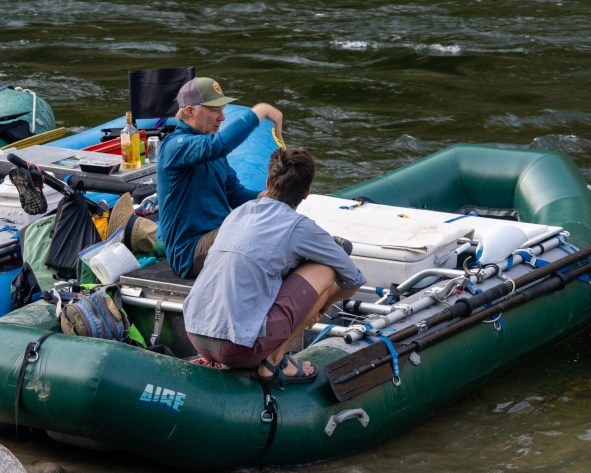 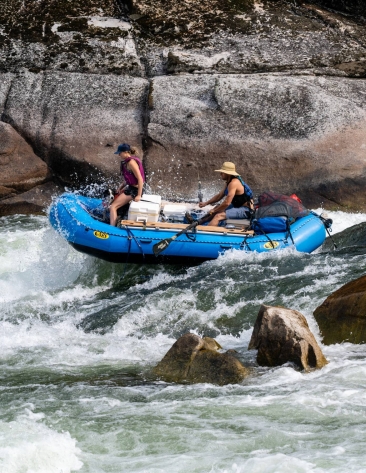 I couldn’t really answer. At some point rowing becomes instinctive. It’s not something I’m thinking about in stroke-by-stroke terms. For one thing, good rowers don’t row much. But that is not how you become a good rower. You become a good rower by rowing a lot. When you start rowing you need to treat every hole like a raft flipping monster. And every cliff as a potential pin situation. And in this way, you learn how your boat moves and you learn what is really dangerous.

For another thing, rowing is more kinesthetic than visual. When you’re in a rapid, you feel the water with your blades. It’s hard to teach that to someone through explanation. They need to do it. A guy I boated with last year let every newbie on the trip row. When they asked, “What would happen if we hit that hole?” He would shrug and say, “Let’s find out!”

There is a balance between treating every feature as something dangerous that you should avoid and intellectually knowing that most features on a river really aren’t that dangerous. 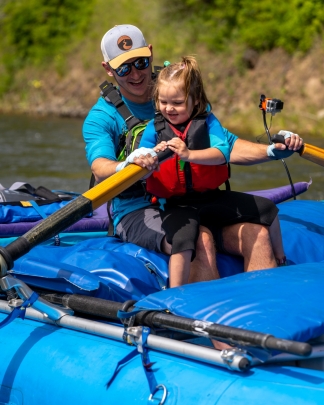 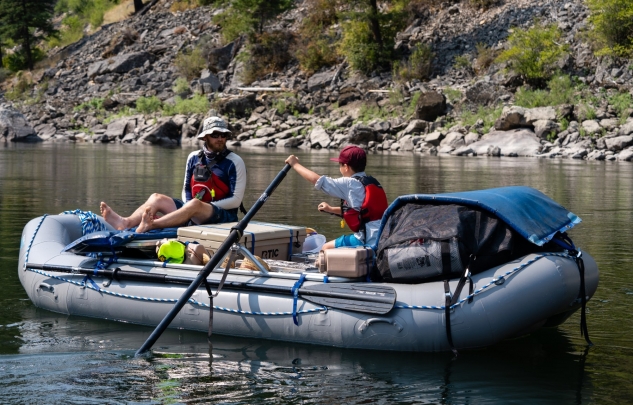 To Scout or Not to Scout—Should Never be the question.
The real question is whether a new boater in your group would benefit from scouting a particular rapid. When you are new to rafting or even just new to a river, you want to scout everything. And aside from possibly twisting your ankle on the scout trail, there isn’t a downside to this. Rookies, especially, can benefit from scouting with a more experienced boater.

This article was inspired by two disastrous runs at Chittam Rapid on the Main Salmon on separate trips last summer. On the first trip, we decided not to scout because all the other rapids were washed out. Note to self: Chittam doesn’t wash out—it gets bigger. A guy who hadn’t rafted in 19 years ended up flipping his raft. Surprise, surprise!

The next trip, a month later, we skipped the scout because the water level was low and everything seemed benign. Surprise again, a rookie flipped his raft and he and his brother ended up swimming. A strap broke on a lifejacket and the situation got serious fast.

Fortunately, in both instances, everyone ended up safe back aboard their raft by the take-out. But even so, both incidents could’ve been prevented by scouting; furthermore, and just as importantly, both boaters who flipped would’ve increased their knowledge of rafting whitewater instead of swimming it. 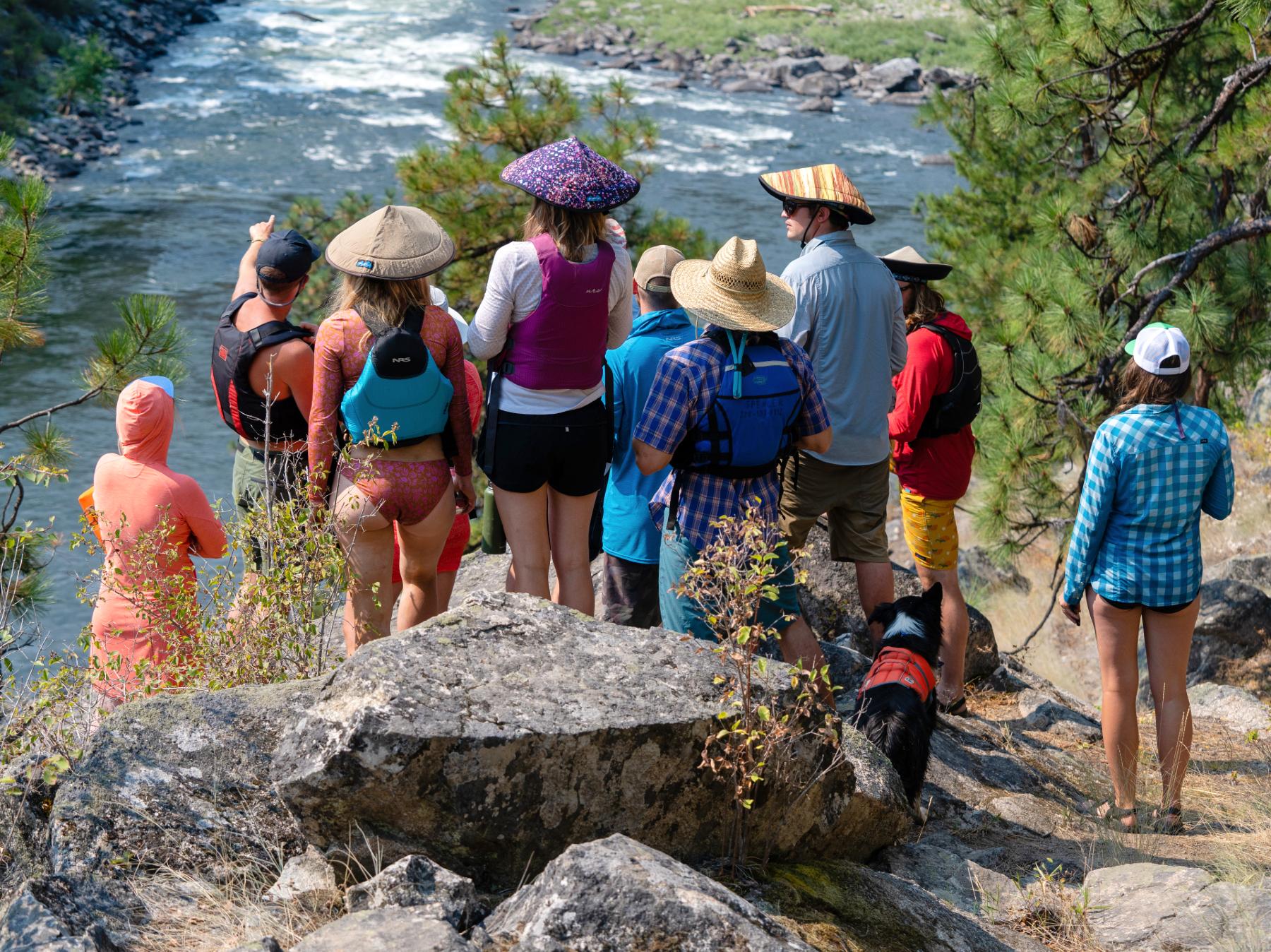 Be a Good Mentor/Role Model
Boating with an experienced boater should be safer, not more dangerous. I remember a kayaker telling me that the closest he ever came to drowning was with a bunch of professional kayakers. Although I don’t know the exact circumstance, it probably involved bravado, tunnel vision, and a dangerous sense of self-sufficiency. While it’s true that you are responsible for you, when you’re boating with others, you’re also responsible for them. We all come to the river with different skills and experiences. Learning should be the life-long goal.