I was napping on the raft just south of the Canadian border in late June on Montana’s North Fork of the Flathead River. I had a couple of hours to lounge while my crew ran the long shuttle. Under the warm Montana sun, I counted boats to pass the time. It was very busy at the launch. In the short time window, more than 40 different rafts launched along with a number of inflatable kayaks and small pontoon boats.

Many groups looked geared up for fishing, while others were setting out on a scenic float trip. I’d estimate less than half of the boaters and passengers were wearing a PFD but one group in particular really caught my attention.

The group set off with three rafts, four individual pontoon boats and one inflatable kayak with a mix of anglers and casual passengers. They had roughly seven children scattered across the rafts and, yet, not one person (or child) in the entire bunch wore PFD. A few of the boats spun through the launch channel, pinballing off the banks and demonstrating a newbie level of oarsmanship. I had a mild panic attack and prayed to the river gods that I wouldn’t find a boat pinned on a strainer downriver.

The failure to wear a PFD on this day was exceedingly common amongst the anglers. I can’t recall counting one angler who donned a PFD while the non-angling groups were far more safety-oriented. And yet, it’s not that surprising. I’ve spent the last decade guiding fishing trips in multiple states and countries, and be it Montana or Chile, this lackadaisical mentality toward PFD use seems to be a cultural norm.

I’m guilty, too. I can recall specific instances where I was nervous about rowing a stretch of water but didn’t make my anglers wear a PFD. Stuck in the angler mindset, I pushed forward even though my gut instinct told me it was the wrong move.

Fishing and rafting trips are different in many ways, but they often occupy the same stretches of water and regardless of boating style, accidents happen. And in the end, there really is no excuse for not wearing a PFD. Here’s how anglers in my experience, including myself, have justified not wearing a PFD:

Excuse – The rafting trips are running beefy lines. I’ll be pulling back on the oars to slow down and take the sneaker lines.

Reality – Sneaker lines still have holes, rocks, logs and rogue waves that can capsize a raft or drift boat. Or, what if there isn’t a sneaker line at the water level you’re running? Wear a PFD. 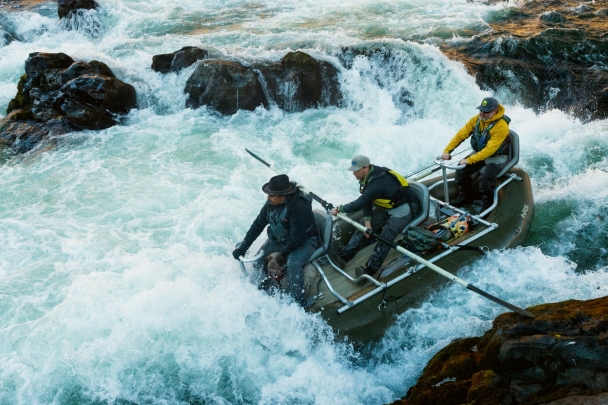 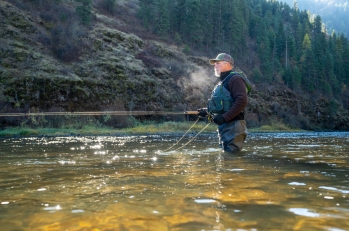 Excuse – I have lean bars and seats on my raft. It’s not like my anglers are hanging off the tubes.

Reality – Losing your balance and falling overboard is all too easy and I’ve seen it happen several times on experienced guide and personal boats. Wear a PFD.

Excuse – We are all pretty good swimmers and it’s hot outside anyways.

Reality – You can’t swim well with a head injury and nobody is immune to a strainer or other river hazard. I’ve seen a full-size brown bear struggle to break free from a log in Alaska. Extra floatation is always necessary. Wear a PFD.

I made the push to enforce PFDs on guide trips mid-way into my decade-long career, especially on rivers of high consequence. I didn’t make this move until I read about a guest drowning on a guided trip in another region. Although it happened on a pretty tame stretch of river, one sudden move sent the client over the side and into a log. 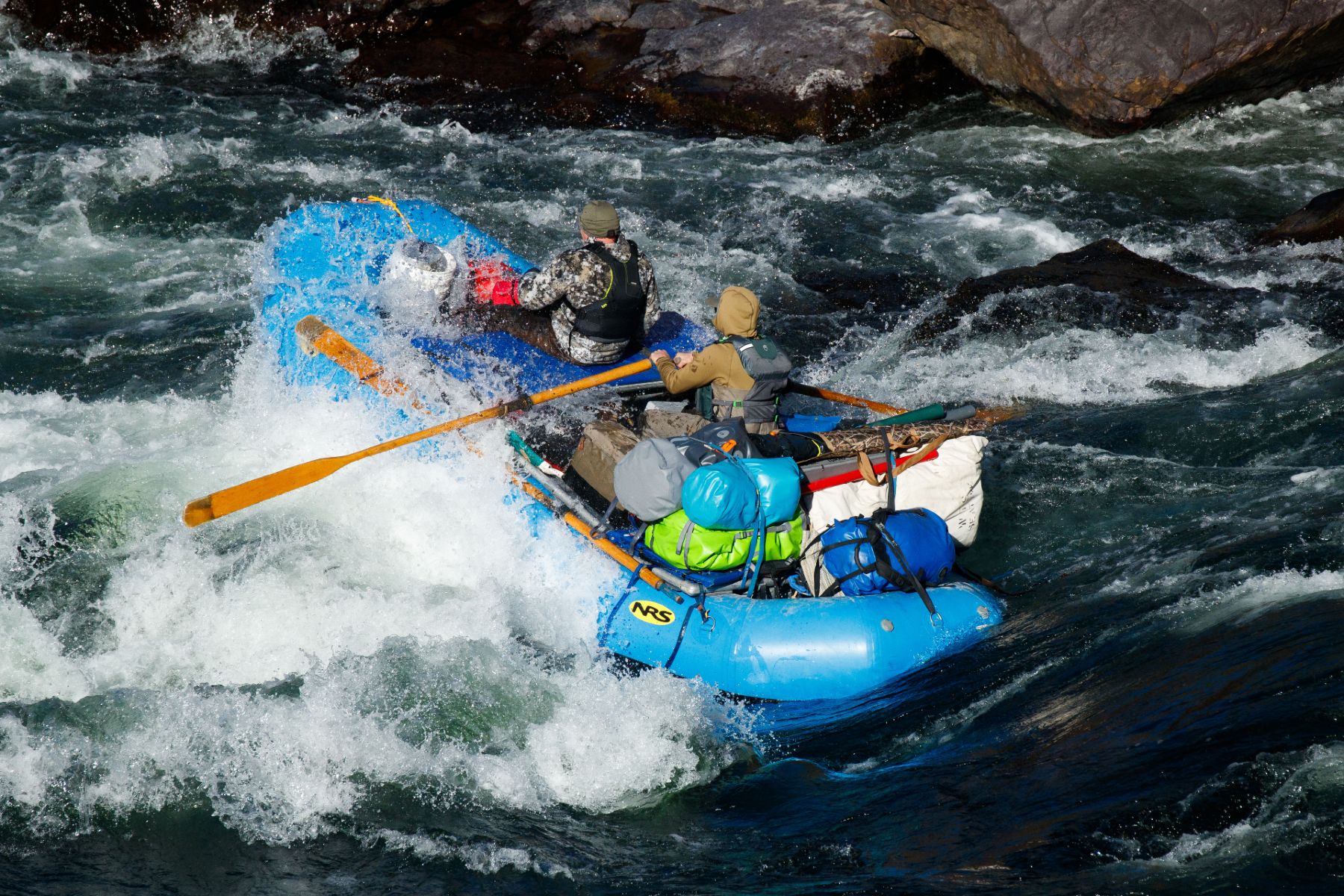 Looking back, I consider myself very lucky to have run without incident for so many seasons prior. While some stretches of rivers are mild class I waters, an angler overboard can still experience cold shock and a number of other physical limitations that are potentially fatal. Wearing a low-profile inflatable style PFD on the slow sections should remain a minimum requirement, especially on commercial outings.

Montana’s Bitterroot River is a prime example of a deadly system that has no actual whitewater. Despite being a class I-II river, it’s loaded with downed trees and has multiple diversion dams. The channel shifts during the annual runoff, creating a completely new route in many areas each season. Take the wrong channel or make a wrong move in this low gradient, slow-moving river and you can quickly succumb to a strainer. It’s the deadliest river in the state and it doesn’t have a single rapid.

There are rivers and scenarios similar to the Bitterroot all over the world. One of my fellow guides was rowing a client through an easy stretch of water on the Yelcho River in Chile. Despite its low-class rating, the river is still powerful and known for the hardwood debris that’s hidden and littered throughout the water. Unexpectedly, the angler in the bow fell backward, landing in the water without a life jacket. He was heavy and it required two people and several minutes to get him back on board. In that time, the river had dropped into a faster chute where they narrowly missed a midriver tree. These are people who run that river every day and are expert anglers and rowers. Accidents happen. 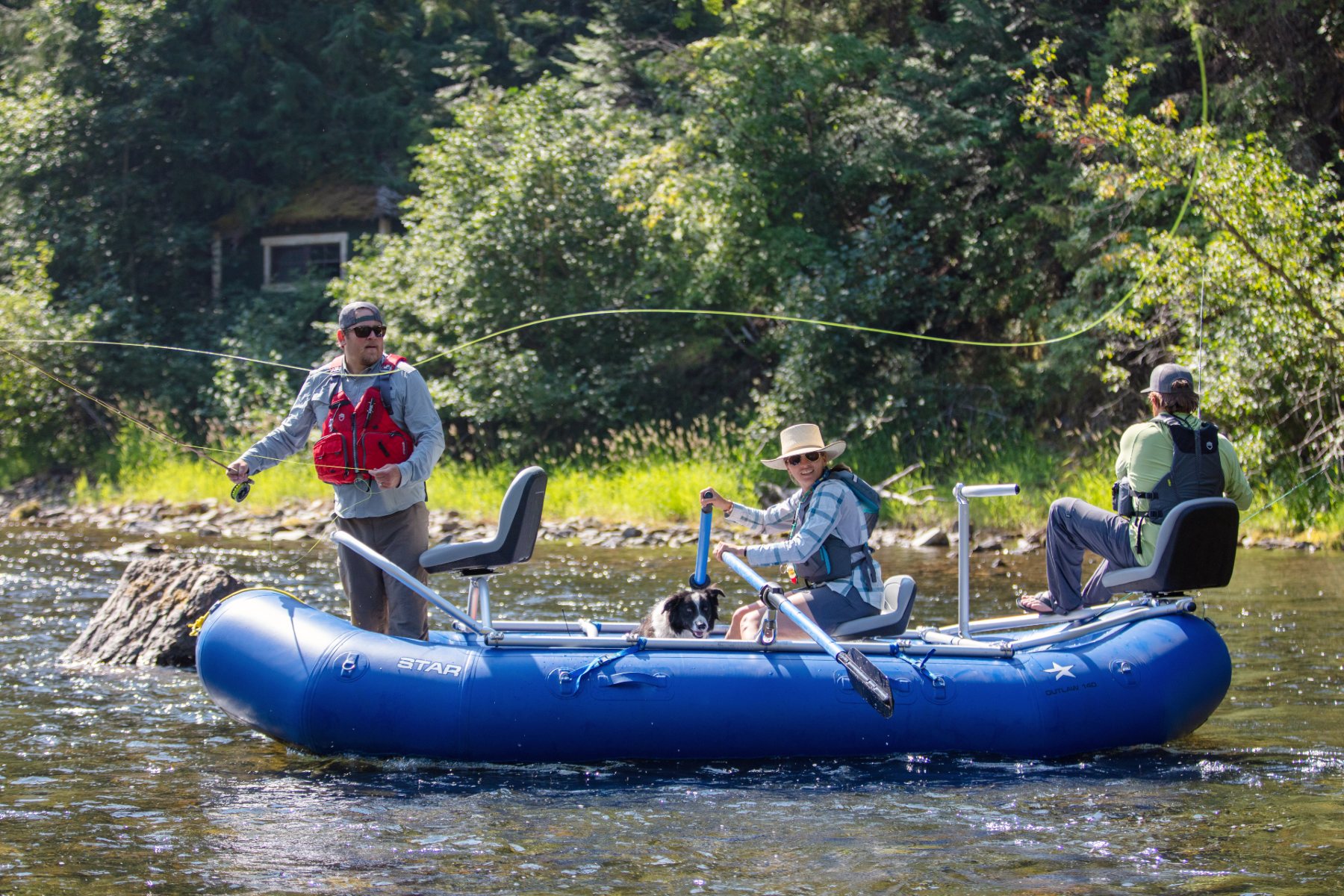 Years later on the same river, I ran a multi-day rafting trip with a couple of friends from the kayaking community. They run big whitewater and know where the hazards lie in a river. Although this river had little in the way of rapids, I noticed they were both wearing a PFD for the entire float. I came to the realization that wearing one becomes habitual after a while. I don’t think twice about putting mine on now, but it was never a habit early in my career. If anglers band together to make it a habit while encouraging others to do the same, the culture can quickly change, and lives will be saved by the increase in PFD use.

The 2019 U.S. Coast Guard Recreational Boating Statistics report clearly shows the life-saving roles PFDs play. The number one cause of death in boating-related accidents—by a very large margin—is drowning. Among 439 drowning deaths in 2019, 362 of those individuals were not wearing life jackets. To top this off, the top three causes of accidents were operator inattention, improper lookout and operator inexperience and a majority of the deaths occurred in flat or slow-moving waters. 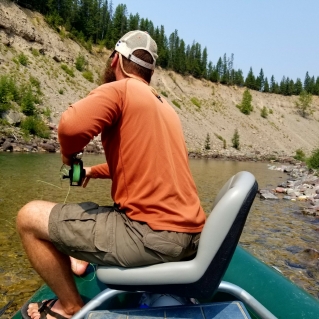 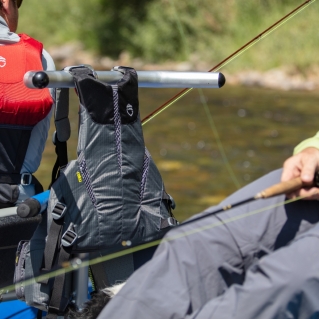 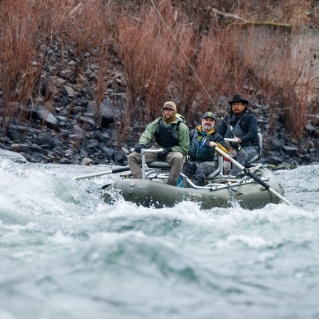 On a positive note, the ongoing US Coast Guard life jacket wear rate study reports an overall increase in use for recreational boaters. In 2019, the average wear rate was 24%, showing a full 13% increase from the study’s origin in 1999. The numbers are encouraging but they still leave three out of four people unprotected on the water and it’s safe to assume a fair number of those folks are anglers.

As a general rule, I transitioned to wearing a PFD anytime the boat is moving downriver. During hot spells, I’ll pull over to swim and cool down in the shade, removing the PFD to relax but it goes back on when the boat is moving. I wear it on all new waters and anytime I have a doubt about the conditions and rapids ahead, the life jacket is buckled down. If the rafting groups are wearing them, anglers should be as well.

The evidence is clear that PFDs are life-saving devices in all types of waters and it’s time for the angling community to strap on a life jacket when fishing from rafts, drift boats, jet sleds and every other type of watercraft. There are fishing-specific PFD models and low-profile inflatable PFDs that do not inhibit movement. Some, like the NRS Chinook and Raku, even double as a wearable tackle box with pockets for fishing gear and tools.

Wear a PFD when you go fishing. The data doesn’t lie and in the event of an accident, it can save your life.