Passing the Oars on the San Juan River

There are a couple of elements to this opening story that will make you question my dad skills. The first is the fact that my 16 almost 17-year-old daughter has never touched a sheep.

What kind of parent doesn’t take their kid to a petting zoo where they might touch a sheep?

Stay with me. It gets worse. So much worse. 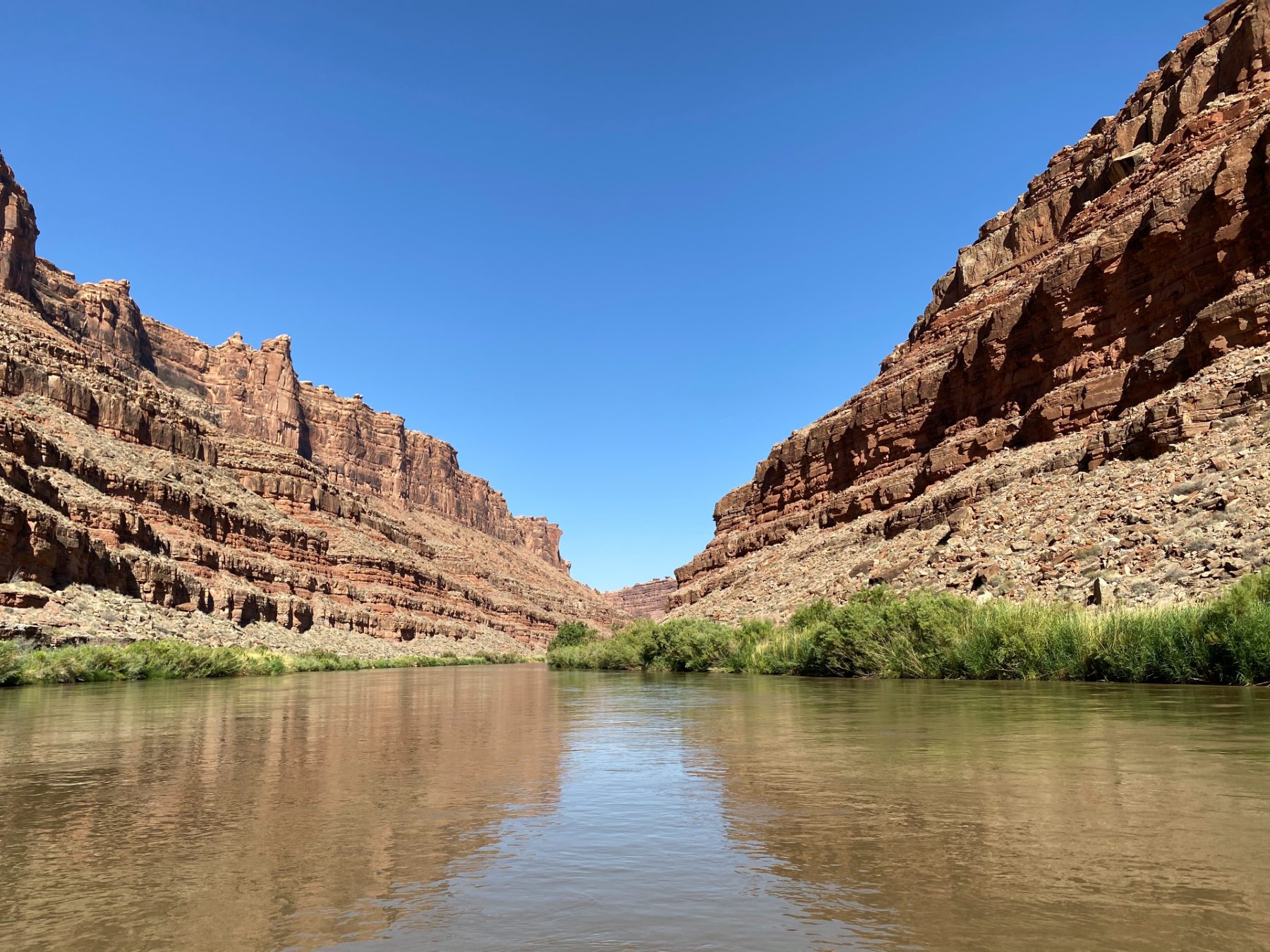 We were somewhere in Colorado on our way to float a section of the San Juan River in Utah. Our party consisted of my daughter, her friend and me. The sheep conversation had started because we were traveling through sheep country. It was early June and ewes and new lambs dotted the sagebrush-covered hills along the highway.

“You could touch one now,” I suggested.

This led to the question of whether or not my daughter, who is reasonably fast, could outrun a sheep. Her friend tried to Google the answer but had no service. We would just have to do this the old-fashioned way. 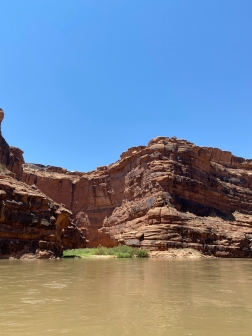 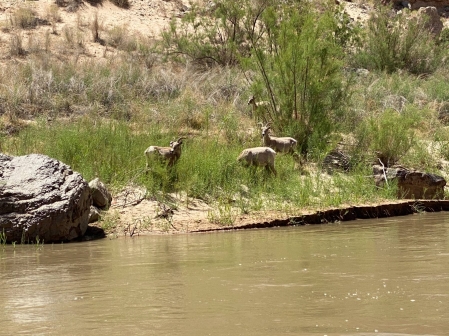 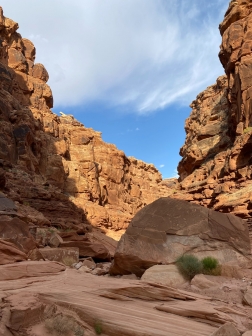 At a turnout I pulled the van and the raft into the soft gravel alongside the road.

“What are you doing?”
The highway was empty. A few ewes grazed just on the other side of the fence.
“Now’s your chance.”
“What?”
“Go,” I said.

She took more of a stealth approach, creeping over the fence and walking slowly toward the sheep. At first, they just kind of moved off but then, as they fled faster, she broke into a run to finally consummate her desire to touch a sheep. Then she stopped. She put her hands up and started slowly walking backward. Two Great Pyrenees Sheep Dogs the size of sheep approached her, hackles raised. I shot out of the van, jumped the fence and prepared to offer my body in place of hers if the dogs needed to maul someone. Fortunately, it didn’t come to that. We backed away and the dogs retreated to their sheep. We continued to the put-in at Sand Island. Sheepishly. 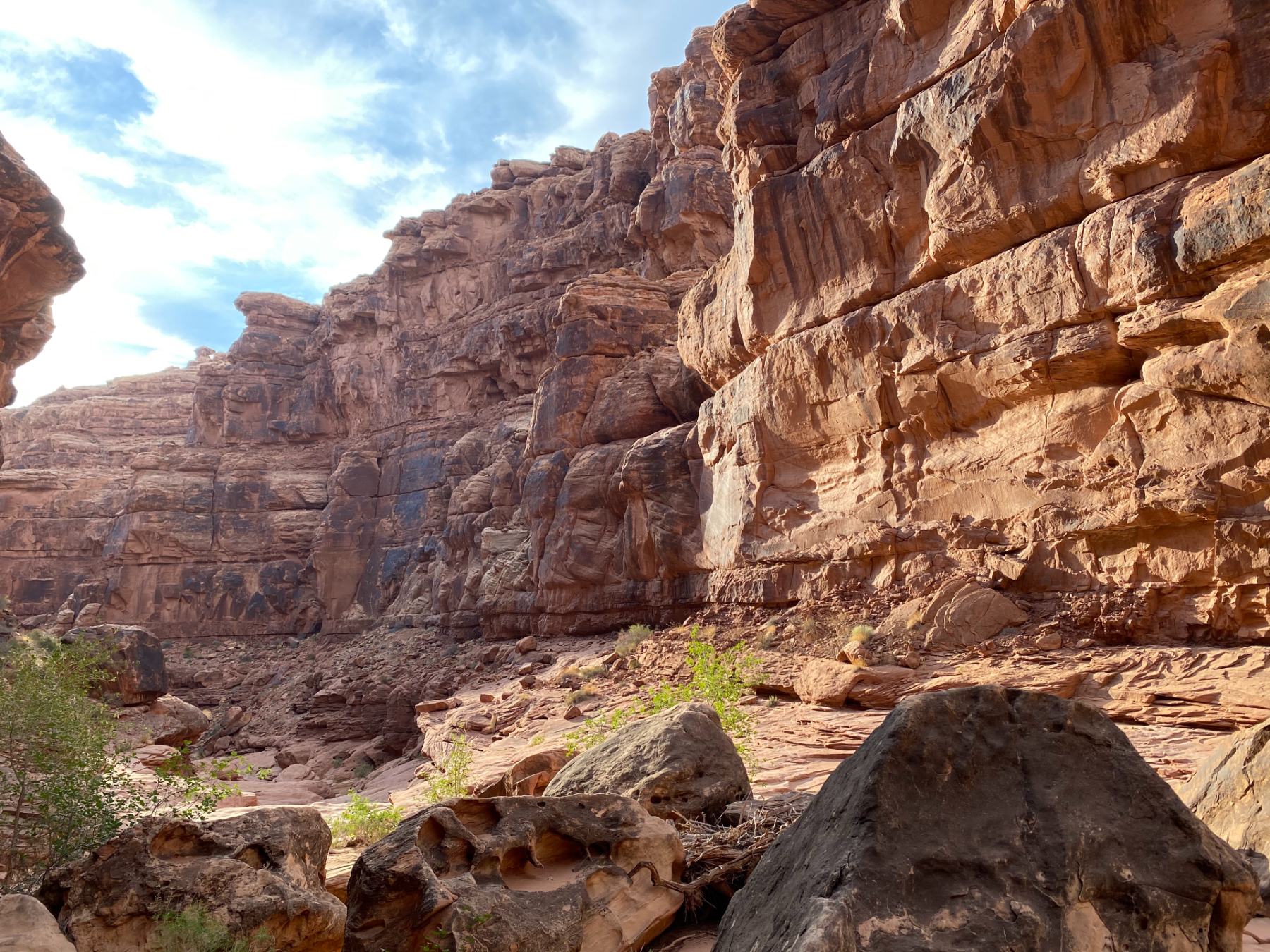 To somewhat redeem myself as a parent. I had chosen—like, on purpose—to row two teenage girls 84 miles down the San Juan river. I have dragged my oldest daughter on rafting trips since she was a little girl, but her friend was brand new to rafting and, for that matter, camping. She vaguely remembered an experience involving burnt hot dogs and a tent blowing across the Nevada desert, but only vaguely.

While there are only so many rivers to raft, there is an infinite number of trips you can take. One involving a dad and two teenage girls is one of those possibilities.

At the put-in, large groups rigged their flotillas and we snuck our single raft into the lineup. Not gonna lie, there were looks of concern. One man gave the girls a collapsible water bucket to cool the camping mattresses that they would be sitting on, perhaps thinking that I had not properly planned for this and other situations.

And while I admit that I’m not the most conscientious dad when it comes to planning and preparation, I’m competent where it counts. And I would further argue that teenage girls get plenty of instructions, opinions, and subtle suggestions from other people and peers. 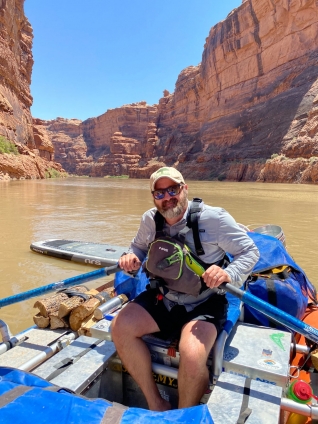 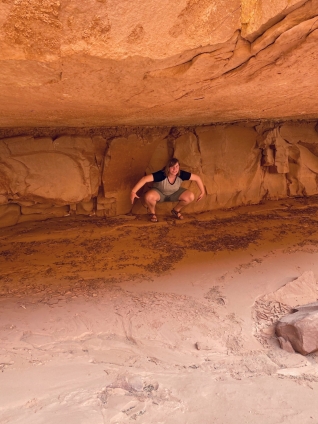 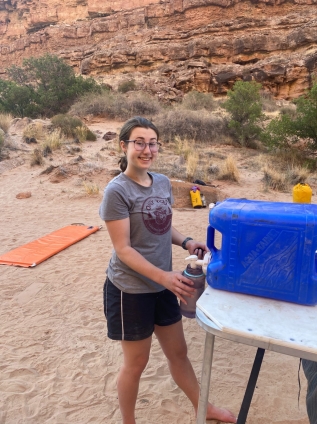 From my perspective as a high school teacher and a parent, it looks like the whole world is trying to tell teenage girls who to be. Sadly, the message looks more like a game of twister, requiring impossible contortions, rather than something coherent and healthy.

For six days, my daughter and her friend got to be 16-year-old girls without the expectations of what that is supposed to look like. This meant that sometimes they were the kind of girls who screamed when a lizard unexpectedly crawled up their arm. And other times they were the kind of girls who stalked, caught and held a toad. They held council over some interesting hypothetical questions like: What if humans had tails? They made top-ten lists of Disney Movies. They named every single animal we saw. They made up games. I, for my part, kept them supplied with a steady stream of dad jokes. 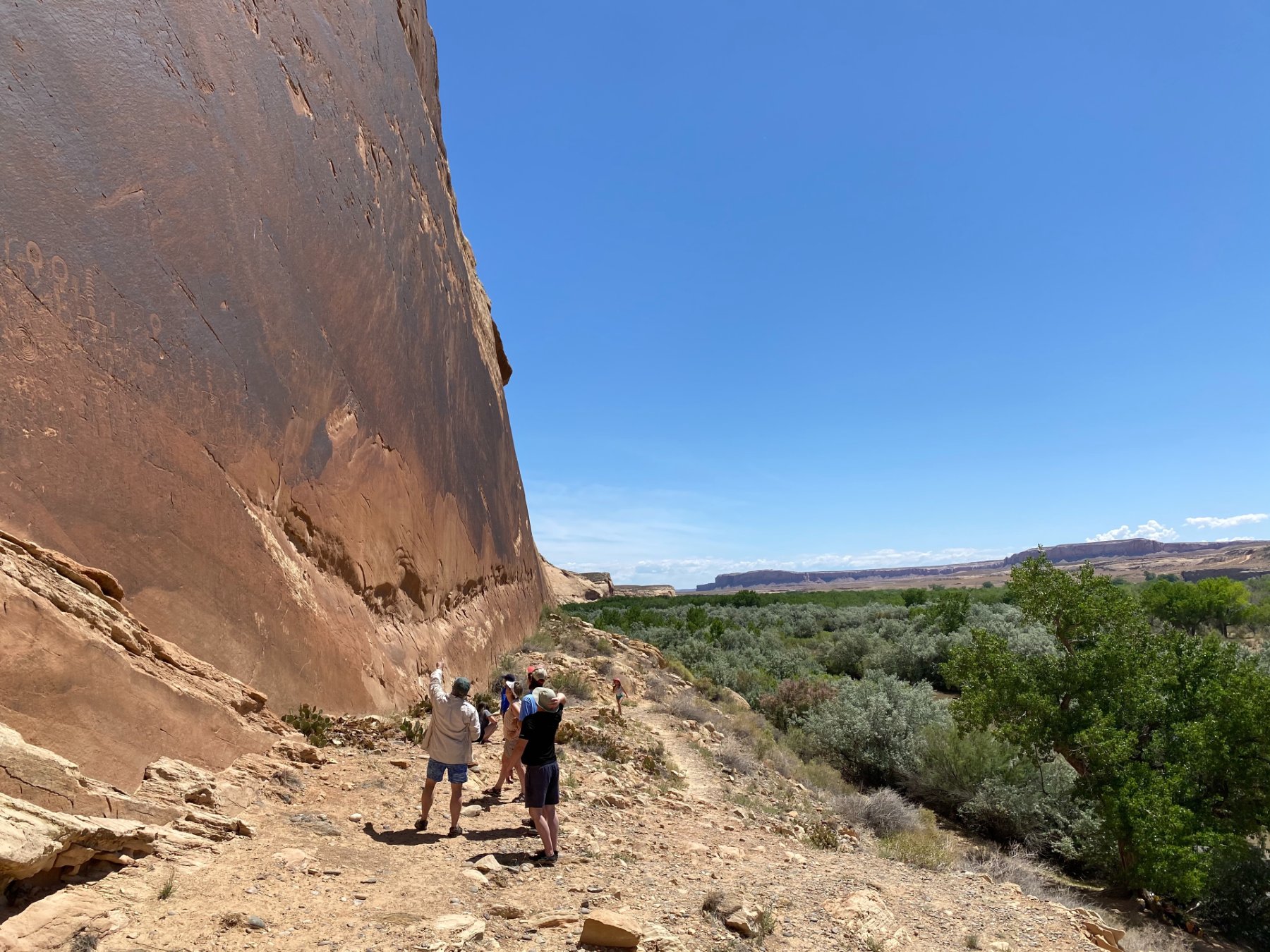 Our days took on a familiar shape as we floated through the red rock desert canyon. I made breakfast while the girls prepared lunch. I rowed the raft, and the girls rode two on the paddleboard. On the paddleboard they navigated the river, told secrets, and giggled. At times I would get on the paddleboard and my daughter would row her friend down the river on my raft.

One morning, with my daughter in the captain’s seat, we passed a group struggling with the morning launch, small children running wild all over camp.

“Someday they will row you down the river,” I called out.
“That’s the hope,” the harried parents replied.

Throughout the day the girls jumped into the river to cool off. In the afternoon, when we arrived at camp, we set up a shade tarp and waited until the sun disappeared behind the canyon walls. Then I would cook dinner and the girls would clean up. At night the girls slept on cots under the stars and I slept on my raft. 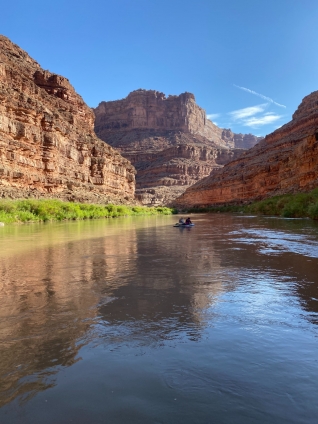 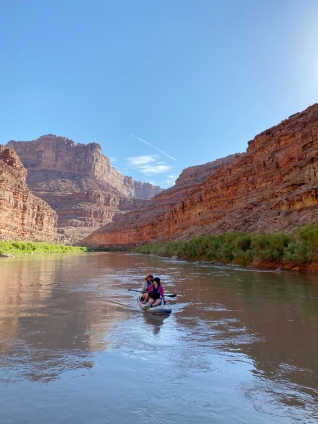 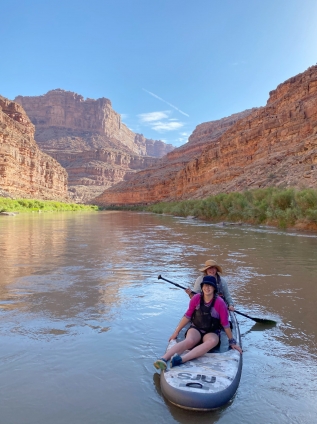 Every day, without me asking, the girls took on more and more of the camp responsibilities. In a side canyon my daughter shimmed up a rock pour over that proved too steep for me.

By day six I felt like they could run the whole trip without me, which, I decided, is the point on the river and in life.

During the trip I watched my daughter with pride and awe, and I realized that our trip was something of a metaphor for our changing relationship. As a dad you start out as a guard dog, but, if you’ve done your job, you end up as an out-of-work river guide. 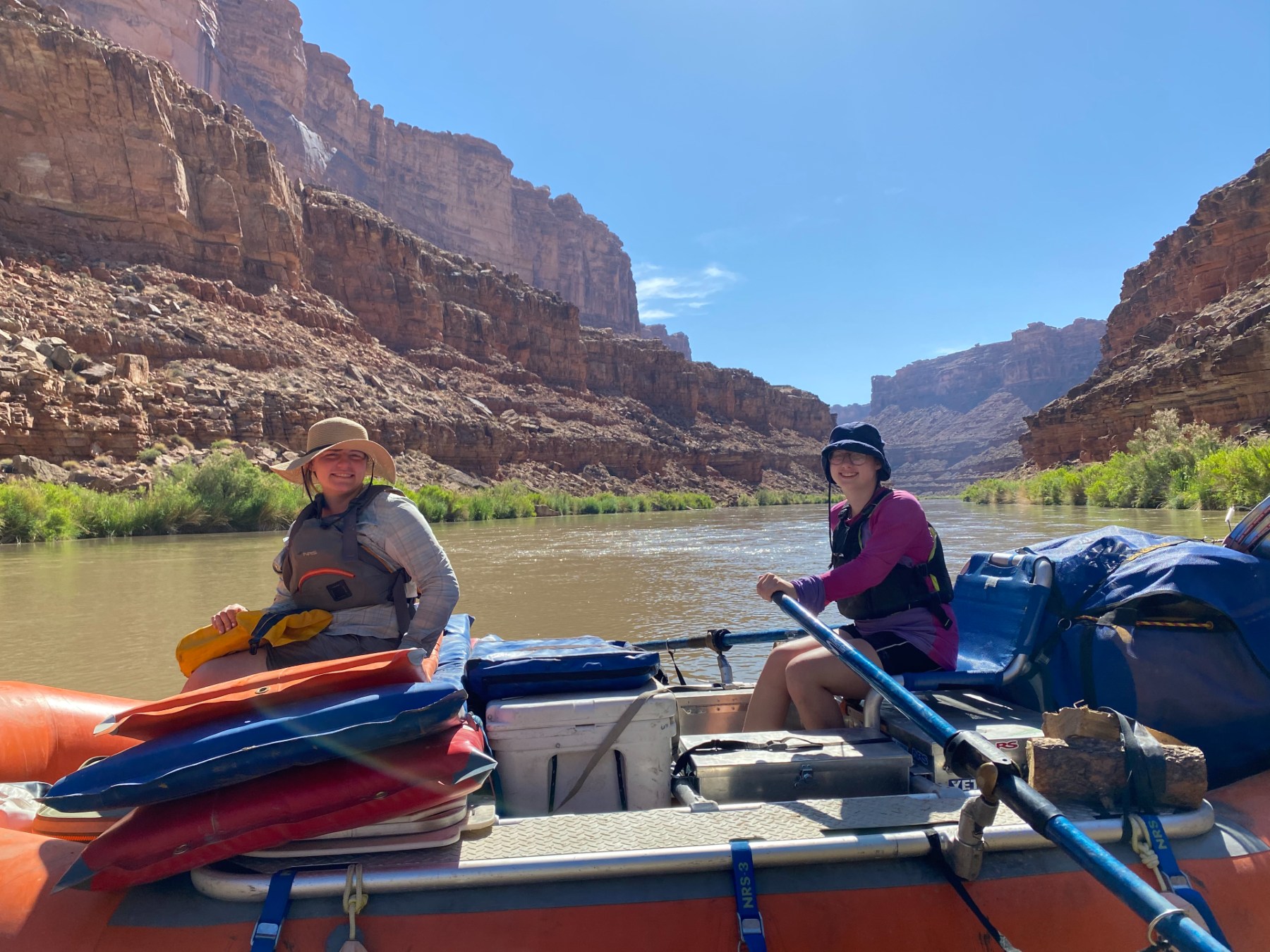