Under fluffy cotton candy clouds and a bright blue sky, our kayaks float on the green-blue water of the Sava River in Slovenia. Through the clear water, tinted with a milky haze from fine snowmelt sediment, we watch the multicolored stones and the occasional fish below our boats. To our left, a train rumbles past, carrying local commuters, foreign tourists and goods up and down the Bohinj Valley. And to our right, a cluster of cows drink from the river, lapping loudly while watching us with wide eyes as we drift by. The flow whisks us along and we lean back and gaze at the traditional farms and rich pastures with their backdrop of pine trees and sharp limestone cliffs. 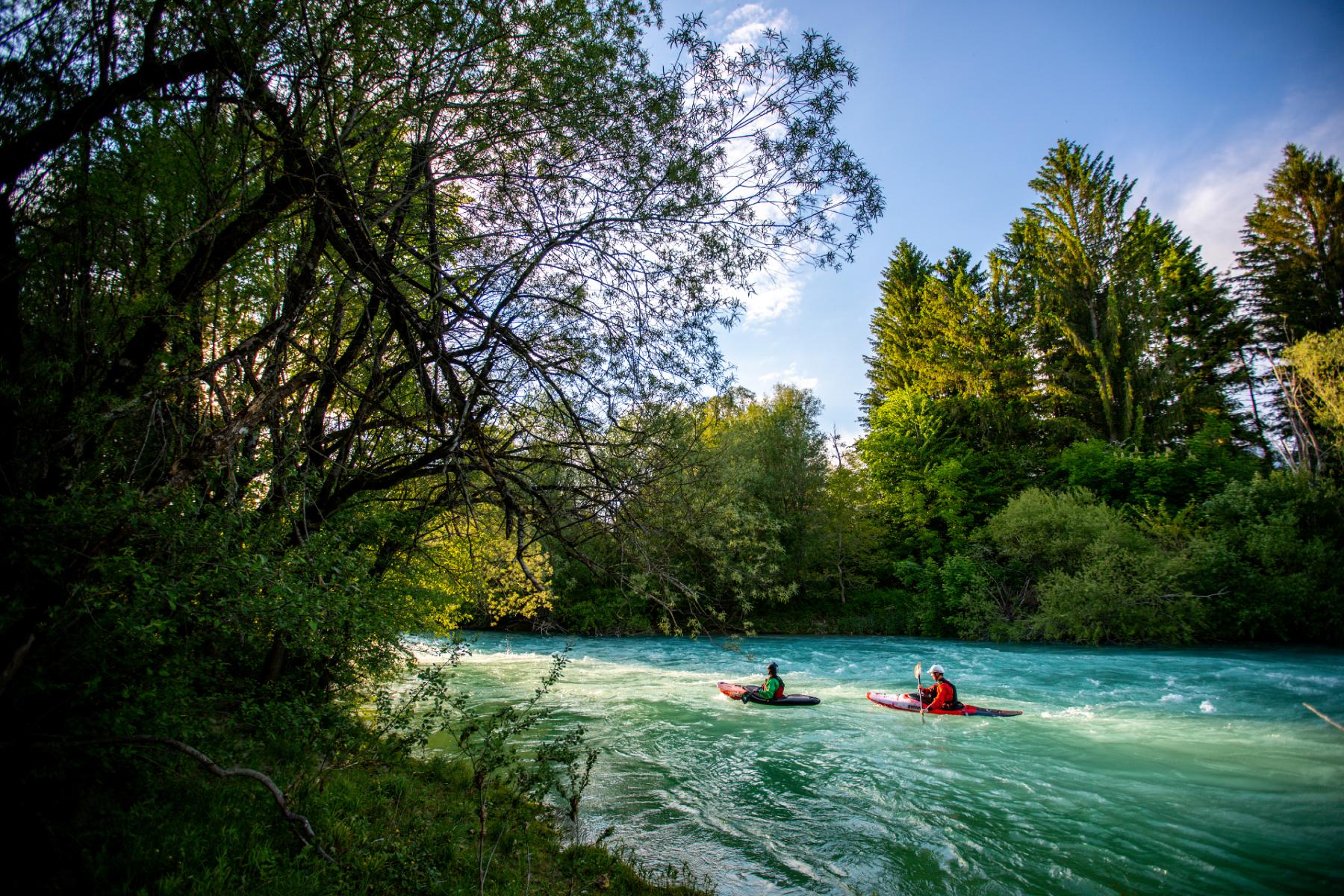 On June 1, the International Day of the Sava River, we started a 258-kilometer river trip to paddle the Sava across Slovenia. This wasn’t exactly Balkan Rivers Tour 5, at least not as we planned it. We had originally intended to paddle the entire Sava River for 1000 kilometers over the course of a month, from its source in Slovenia through Croatia, Bosnia and Herzegovina, to where it joins the mighty Danube River in Belgrade, Serbia. But, restrictions on travel and gatherings forced us to scale back our intentions, and instead, we created a two-week river trip that would keep the tour’s objective–showcase the Sava and stop the dams.

The usual Balkan River Defence recipe of paddle, protest, press release, party, wouldn’t work this year. Instead of inviting all to join, we planned to capture the essence of the Sava on film and tell the story of our journey by kayak. So, we gathered four kayakers and a tight media crew, planned our departure to enjoy the final push of snowmelt, from its dual sources to where it flows out of Slovenia and into Croatia. Along the way, we performed the first continuous waterfowl survey of the Sava River during nesting season and also the first complete environmental DNA (eDNA) sampling of the Sava, with special attention to IUCN Red List fish species, Huchen. No events, press conferences or media coverage, just kayaking, exploring, sampling and really getting to know, so we can eventually share, the Sava. 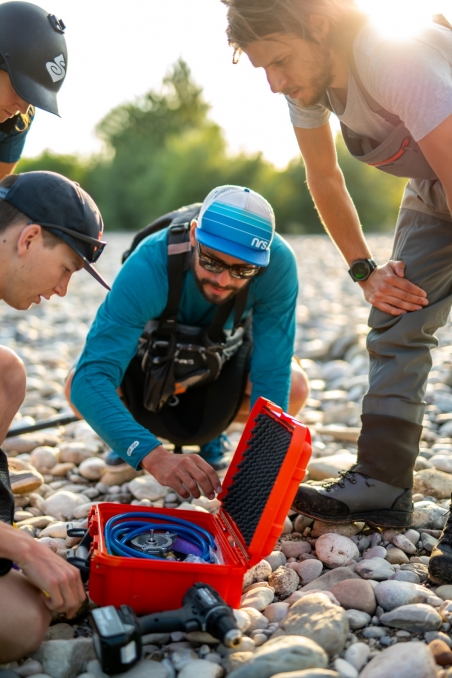 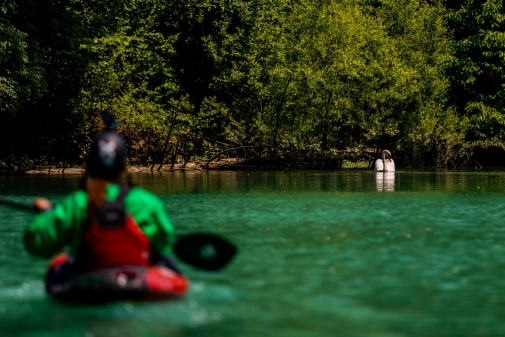 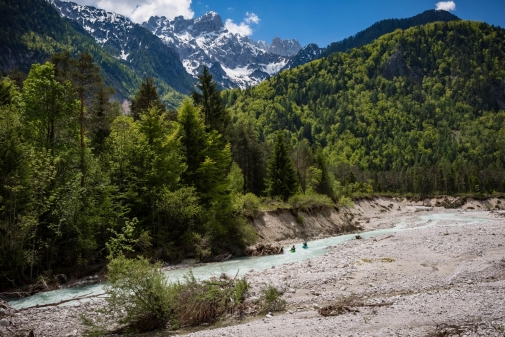 The Sava is a river of two sources, so we split up to explore each fork. Carmen and Bor started on Lake Bohinj, paddling across the glassy morning water, rimmed by the mountain ranges of Triglav National Park, before enjoying the narrow canyon and playful whitewater of the south fork, called the Sava Bohinjka.

Rok and Branko started on the north fork, called the Sava Dolinka, which collects its waters high in the Julian Alps, falling as a waterfall in the Tamar Valley before it sinks underground and resurfaces as the wetland, Zelenci. They started on the trickle of turquoise water which gains volume as it flows through Kranjska Gora and past the world-famous alpine ski racing courses. The two crews met where the Sava Bohinjka’s clear green water mixes with the Sava Dolinka’s milky blue. Our confluence camp spot was a place for story-telling, as we compared two days of early morning portages, midday boofs, and the evening serenity of the dual sources of the Sava.

The days passed in a playful manner, slowly paddling in a southeast direction, enjoying the views of both the Julian Alps and the Kravanke mountain range and keeping an eye out for water birds. –  Rok Rozman 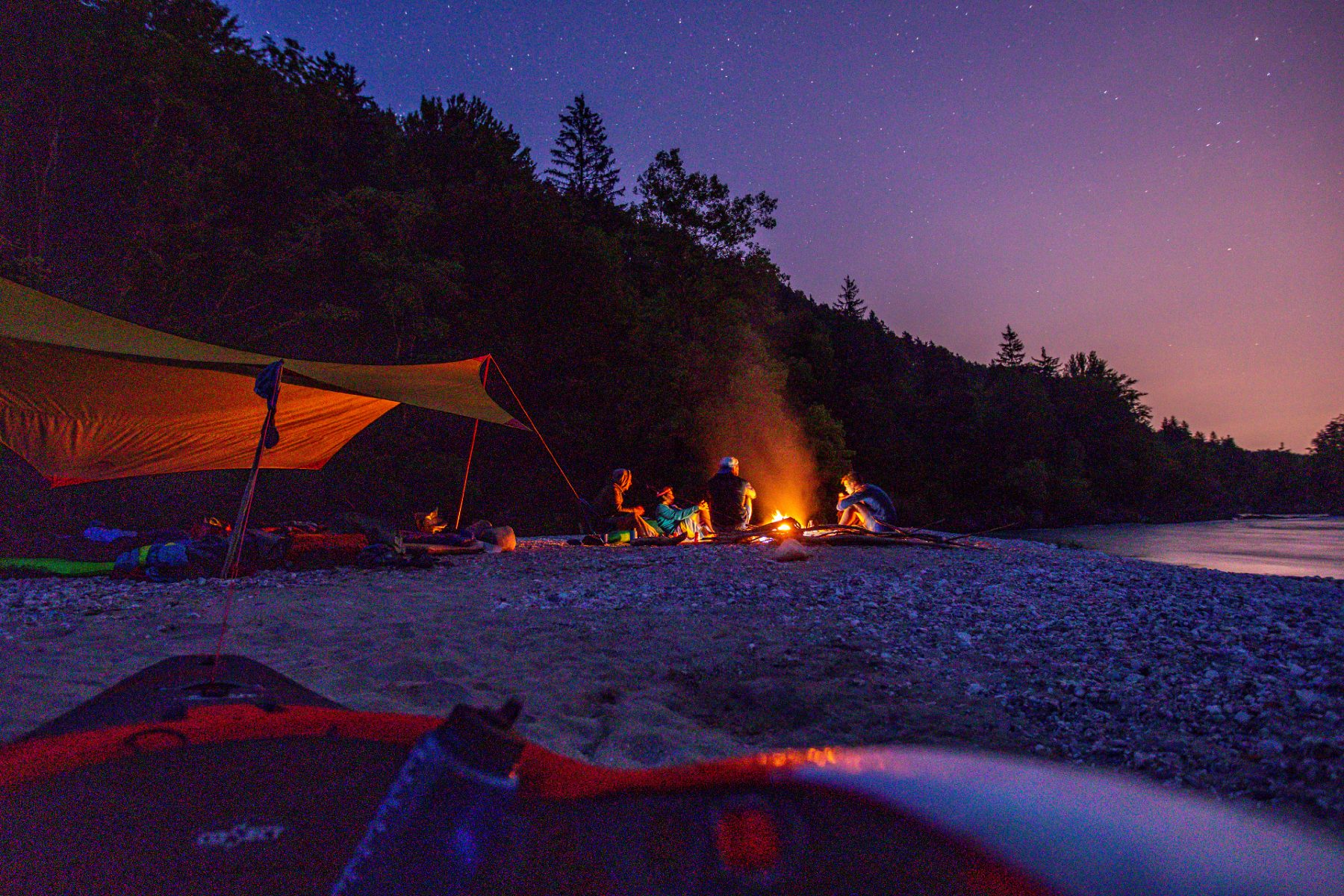 We fell into the simple and satisfying routine of any good river trip. Wake with the sun. Pack, snack and get on the water. Easing into the day, we often paddled in silence taking in the river’s current character, imagining how it looked in the past and even wondering about its future. At times, we paddled to the surround sound of birds and rushing water, and other times to the hum of modern transportation. In sections, the river flows between a major railroad on the left bank and a busy regional road on the right.

In contrast to the roads and rails that run along the Sava today, we learned the river was historically the primary transportation route during the Austro-Hungarian Empire. Back then, oxen and people pulled massive wooden boats laden with goods up and down the river. Our plastic kayaks allowed us a chance to travel back in time, spotting ledges and old trails that were used for this historical transport route.

When the sun was high and hot overhead, we picked a spot for lunch, which some days meant sandwiches on an inaccessible gravel bar, far from all views and sounds of civilization. And other times we met with our support van and media team who treated us to fresh burek—cheese or meat-filled pastry—still hot from the oven, a reminder of how close to towns and cities we really were. 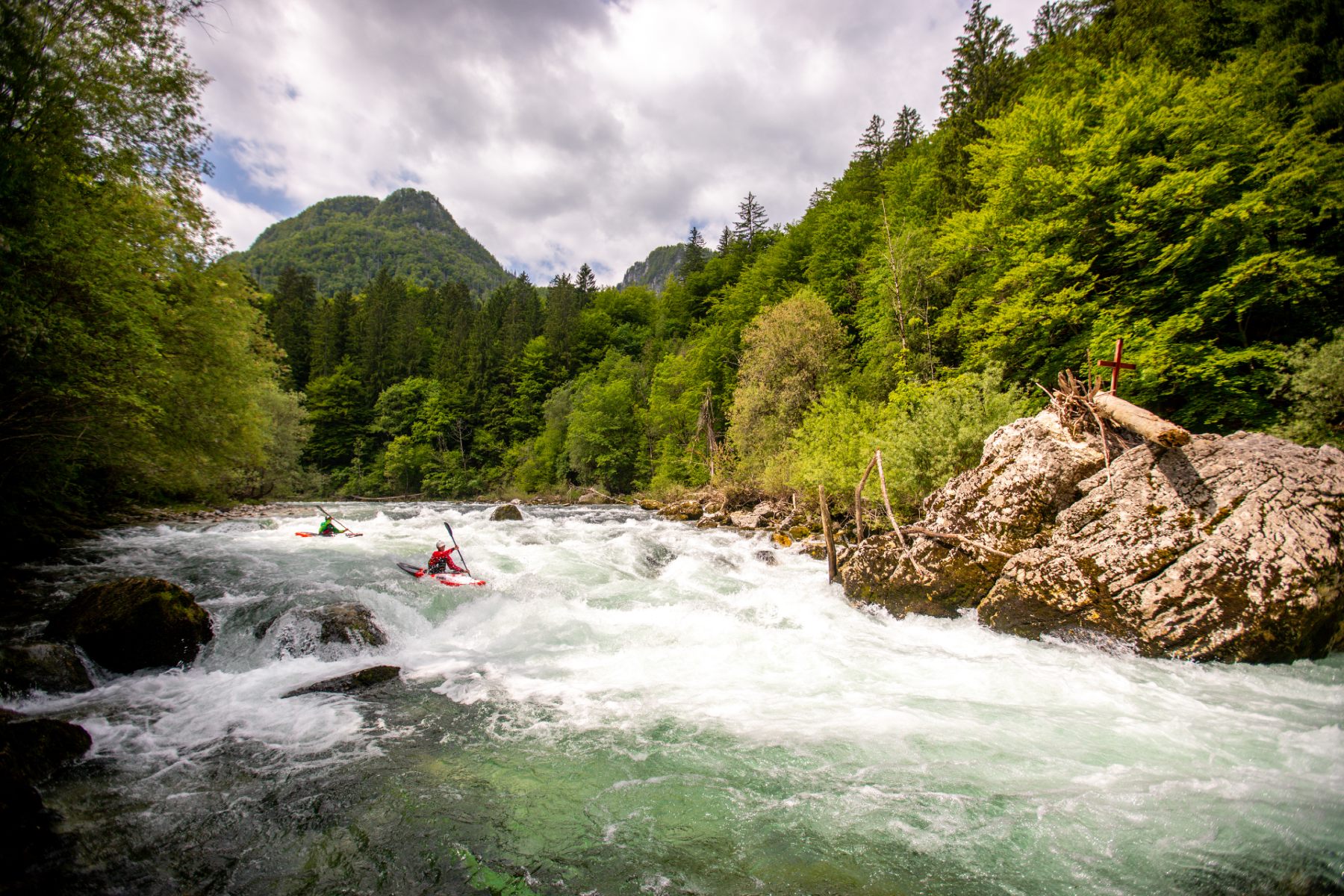 Each day had its own highlights, and as the river changed, so did our understanding of her. On day three, we paddled through wave trains and rapids, enjoying the high water just below the city of Radovljica. On day five, we dodged gates on our way through Tacen, the International Canoe Slalom racecourse, before drifting through Ljubljana, where the rivers close proximity to the capital city was concealed by a thick band of trees on either side, providing tranquility not imaginable so close to the city.

We passed villages and fields, where the water of the Sava feeds the agricultural industry, supports local economy and provides drinking water. On day eight, we floated under the 360-meter abandoned chimney of the now closed Trbovlje coal power plant and got a feeling for the days when people lost their respect for the river, polluting it with coal wastewater. We paddled through industrial zones that are in use today, while simultaneously experiencing the resilience of nature as the river continues to recover and as humans learn to use the river more intelligently. 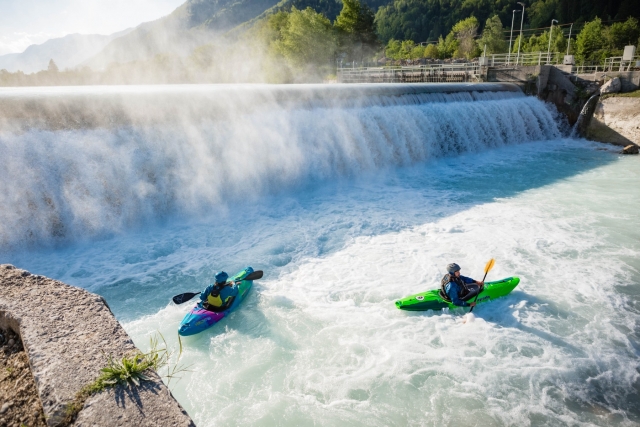 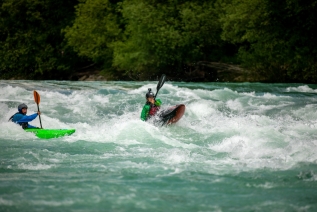 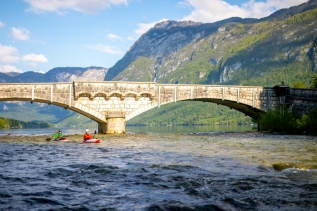 But it wasn’t all whitewater and flow. Along the way, we encountered over a dozen dams and many barriers. We were able to run some of the smaller weirs, but the large hydropower dams required us to portage steep slopes, razor wire and thick, stinky mud. We stopped at some of the proposed dam sites too, drifting in our boats in silence, trying not to imagine concrete in these wild and healthy river stretches.

In Slovenia, the Sava already has 15 dams, and yet wild, healthy segments of river still exist. But with plans to almost double the dams on this river, we understand there is a limit to how much stress a river can take, and these dams would mean the postcard-perfect and environmentally resilient stretches would turn into odorous stagnant water.

We wondered, if businessmen and politicians could see what we see—if they just spent a few days floating on the Sava—would they still put the pen to paper and destroy the river completely? Forcing a politician into a raft isn’t realistic, so instead we took our time to capture the essence of the river in film and photography, to share our experience and show some of Sava’s secrets, hoping to reignite pride and prompt protection for the river. 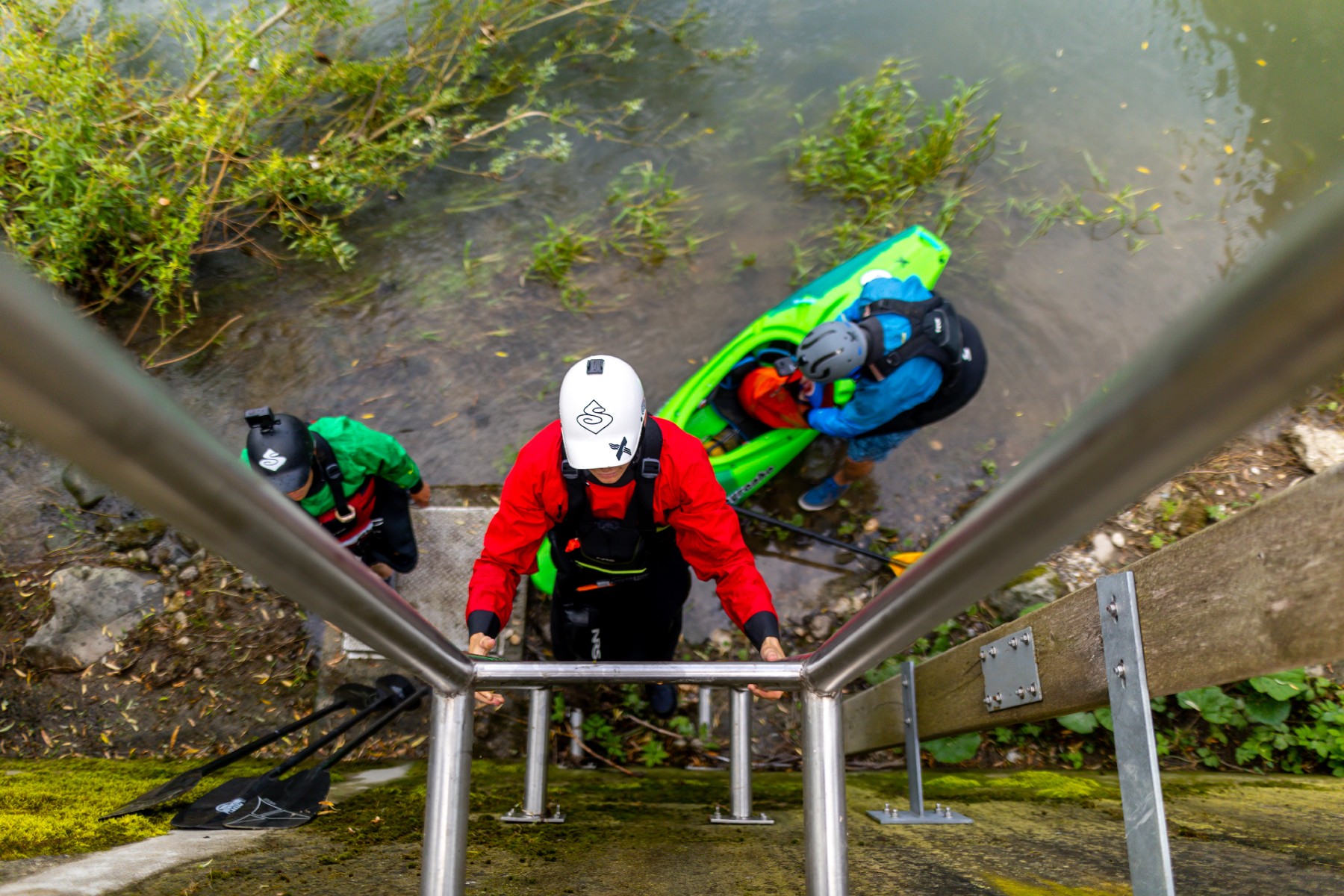 With days at their longest, we relished in the late evening light and usually set camp late, enjoying campfire conversations that undulated between playful banter and thoughtful philosophy about the river, the world and the experiences of the day.

No matter what we encountered each day, we continually scanned for the birds and stopped to sample water, collecting data through the waterfowl survey and eDNA sampling. This data was just as important as collecting film footage, as it would become our ammunition for the fight to keep these 10 HPPs from being built.

“Until now, there was no solid data about fish species presence and abundance in Sava. Without that, it is hard to objectively talk about how already existing Sava dams affect fish distribution on a broader scale of the river. Numbers and graphs are a language everyone understands and they can be an important piece in the puzzle of river conservation.” – Rok Rozman 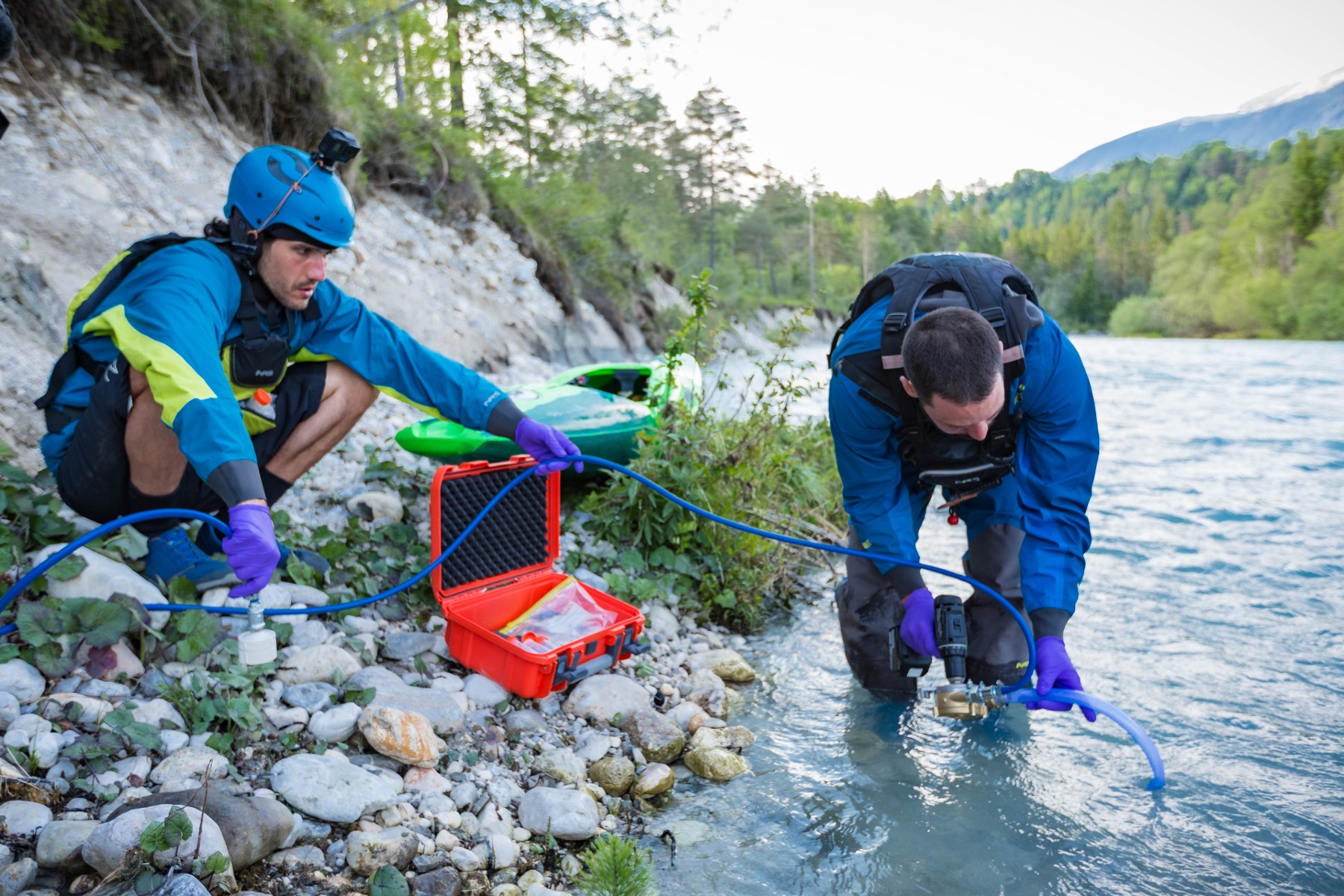 While performing the first continuous census of waterbirds in nesting season along Slovenia’s Sava, we were compiling data to enable specialists to gain insight into the species and quantities of waterbirds present on the wild upper part of the river, the modified stretches, the reservoirs, gravel bars and canyons. Bird watching from a kayak turned out to be an efficient and effective way to count the winged residents, as we could approach them silently with an unobstructed view of the river ahead. We even made new discoveries, as we recorded new nesting pairs and new nesting sites of threatened species like the little ringed plover.

Gathering data from below the surface, however, demanded a more complicated procedure. We carried a basic set of sampling equipment in our boats and stopped at predetermined locations to collect eDNA samples with the goal of being able to provide another method of quantifying the impacts man-made barriers have on the river.

Using a water pump powered by a drill machine we pushed river water through a special filter, that a crew of ichthyofauna specialists will later analyze in the lab for the presence of DNA (isolated from skin, scale, and feces particles caught in the filter) from fish. By the end of this year, we should be able to tell how far downstream the Huchen can be found, how far upstream the migratory Cactus Roach can reach and most importantly get a picture about the fish diversity in the threatened and last free-flowing section of the Sava. 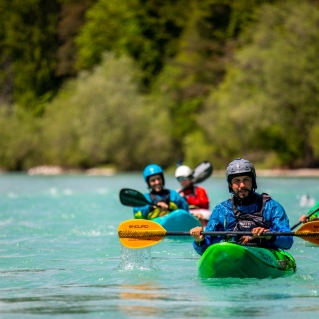 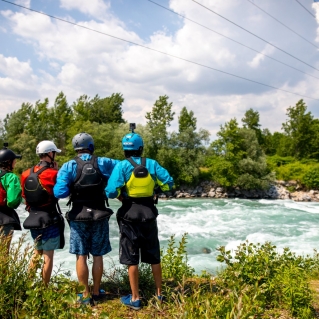 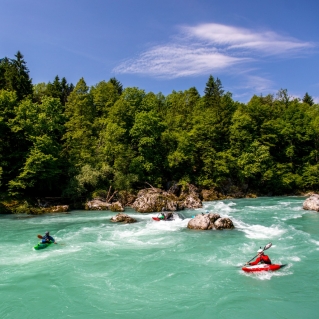 On the evening of our eleventh day on the river, we pulled our boats on shore just a few hundred meters upstream of the Croatian border. With the sun setting, our minds wandered downstream, tempted by the Sava, to float just a little farther and see what other surprises, secrets and scenes were waiting around the next river bend.

Paddling the whole stretch of Slovenia’s Sava River dissolved our previous notions of humans and nature being separate entities. People and rivers are so deeply entwined here—and everywhere. Humans have learned, and in some parts maintained the knowledge of how to live with nature, not separate from it. And although we felt the human impacts along the length of the river, the resilience and health of this river astounded us. We experienced the delicate balance between man and nature, and for a short time, we even became a part of it.

Our kayaks turned into vessels for research, recreation and a self-supported river adventure in our backyard. And our stories and moments along the river will be turned into a film, so that everyone can join us on what was Balkan Rivers Tour 5, and perhaps gain a fresh perspective of how humans interact with the rivers, and how important and resilient free-flowing river stretches are. 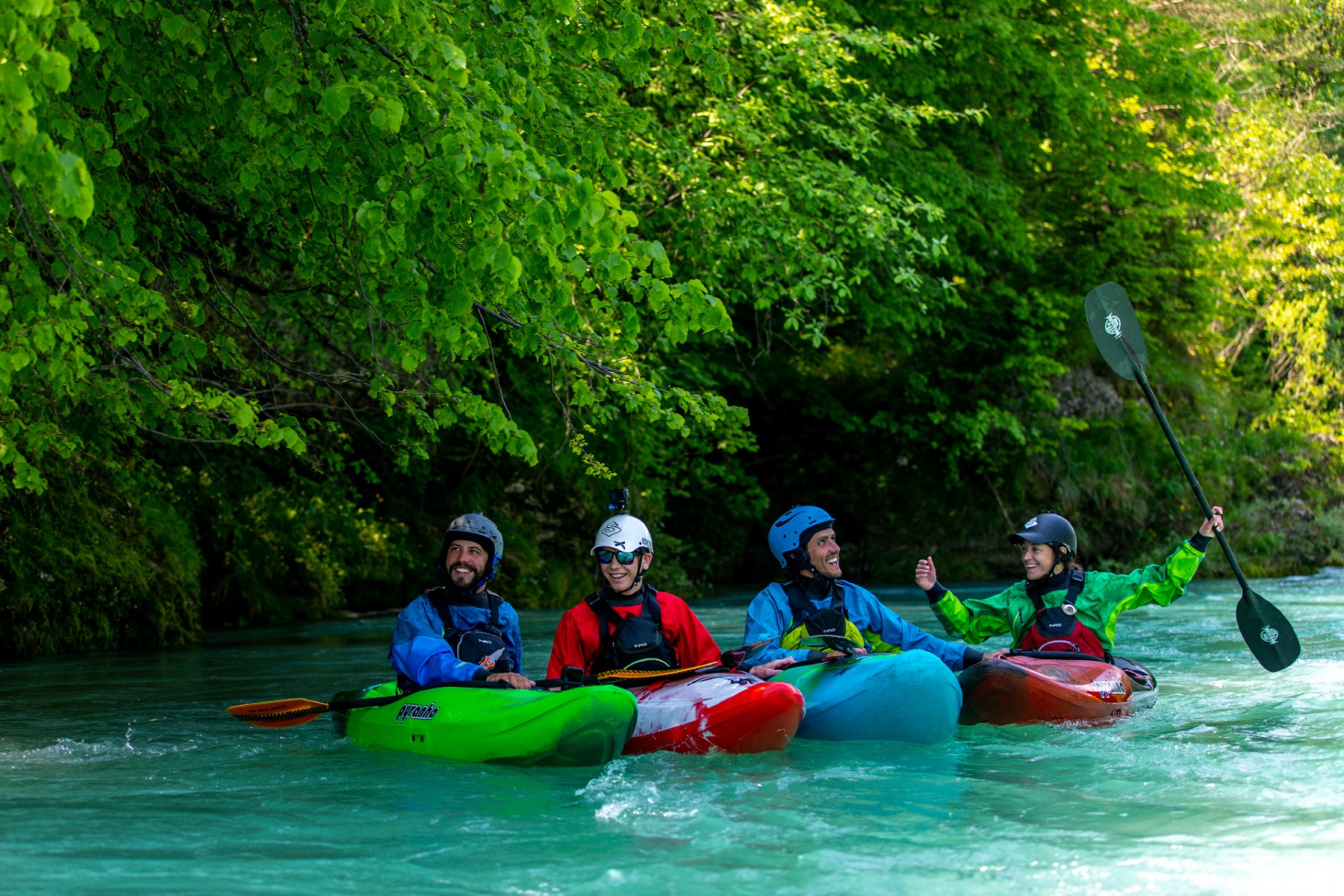 Editor’s Note: By combining close-up shots of flora and fauna, conversations with locals and the eagle-eye vantage of a drone, the Balkan Rivers Defence will make a 52-minute, feature-length documentary from this year’s tour. This film will be their way of sharing the secrets of the stunning Sava River while exposing the threats of 10 new unnecessary hydropower plants (HPPs) planned on the river in Slovenia. This film has yet to be titled and will premier in 2022.