Fear. It’s possibly our most primal emotion. It can immobilize or inspire—push or paralyze. Fear is an emotion that whitewater kayakers have a unique relationship with, and everyone deals with it differently. While it may appear to onlookers that all whitewater kayakers have “no fear,” everyone who puts a paddle in whitewater negotiates a myriad of head games spiked with a tinge of fear. For Anne Stevens, fear is a big part of whitewater kayaking—and she’s not afraid to admit it! But she doesn’t let fear stop her from progressing and living a life saturated in whitewater. Her ability to push past the fear and use it fuel her paddling, her professional life and her dedication to protecting rivers, makes the four-letter ‘f’ word, her ally not her enemy.

Anne grew up in the rainy flatlands of Northern Germany, where kayaking meant touring the flatwater channels. “I wasn’t a particularly sporty kid and, I didn’t like kayaking at first,” Anne says with her endearing, no-bullshit honesty. Born in the city of Jena and raised in Emden, water has always surrounded her. Like fellow German kayaker and close friend Marieke Vogt, Anne’s mom first introduced her to kayaking, when she, a former competitive flatwater kayaker in East Germany, took Anne on training runs with her in a tandem kayak.

A few years later, Anne got her own kayak, met paddle-wielding kids her age, and started paddling adventures of her own with the local kayak club, including multiday kayak camping trips. Those first multi-days exploring the German coast and some of Germany’s bigger rivers, like the Rhein, Weser and Elbe, bound Anne to water. “Even though those trips were neither whitewater nor proper wilderness trips, I really enjoyed—and do so, even more, today—how rivers bring you to places that you can only access and experience from a boat.”

With an appetite for kayaking, camping, and river adventures, it was only a matter of time before the whitewater bug bit. “I was 13 when I went whitewater kayaking in Tyrol with my kayak club, and I was instantly hooked,” she says. “Soon after, I think my mom regretted ever putting me in kayak,” laughs Anne, alluding to her current life of non-stop travel and roughly 100 river days a year. 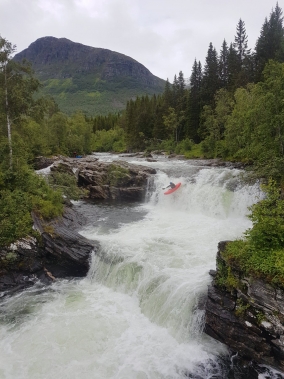 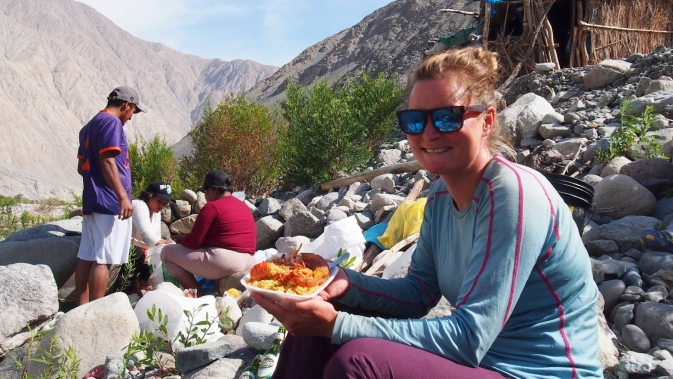 Anne has fashioned a life, a living and river stewardship role from whitewater. Based in Innsbruck she calls the Inn, Sill, Ruetz, the Ötz Valley and Brandenberger Ache her home runs. With ample friends and coworkers to paddle with, and the possibility to paddle almost year-round, she’s found a location that merges her work, play and passion. The variety and proximity of rivers and the mountain sports community makes Innsbruck special for Anne. “I love how there are these amazing gorges around Innsbruck, moving tons of glacial water basically through the city,” she says. “There are stretches with no paths and no people. It feels like you’re in another world, even though you’re just outside the city.” And there’s always someone to go boating with.

With technical, steep alpine rivers as her backyard, Anne constantly faces her complex and everchanging relationship with fear. “When I was younger, I wasn’t scared at all! I just ran stuff that was over my abilities until well into my twenties and was ok with it—until friends of mine had accidents, got injured and I had two nasty swims.” But over the past two years specifically, she feels like she’s getting her mojo back and letting the fun outweigh fear. “Lot of sections (around Innsbruck) that have been stressful for me for years have finally stopped being scary,” she says. “And that feels pretty awesome. I am continuously amazed when I run sections I would have never imagined I could ever do.”

Her recent progression has come from an understanding that her approach to kayaking is different from those semi-pros that she often paddles with. “I have realized that I need more skills and more practice than other people in order to have the same confidence. There are people that run stuff when they’re 60% confident and I need 98% confidence,” she says. “When I set a goal, I do it in a time frame that I’m comfortable with. I don’t need to sit at the big boys table, I just want to go kayaking.”

“Kayaking gives me a purpose for traveling,” she says. “It allows me to get to know other rivers and other countries from a unique perspective.” Chile’s big water Futaleufu is her favorite river. Yet, in late 2019, Anne got the chance to explore Peru, paddling the Colca and Cotahuasi Canyon with Vera Knook and Lena Grüb. “It was probably my best river experience ever,” she says of the steep, remote gorges they ran self-supported. “Well, maybe not every minute of it, because it was hard and super scary—but I never imagined our all-girls crew paddling stuff like that.” She has a spot in her heart for Norway’s rivers, too, and dreams of paddling in Nepal, Canada, India and Africa. But for now, her favorite homeruns, the Brandenberger Ache and the Ötztaler Ache, will do fine. As summer ramps up, it’s high season for Anne’s full-time job managing Stubai Rafting. 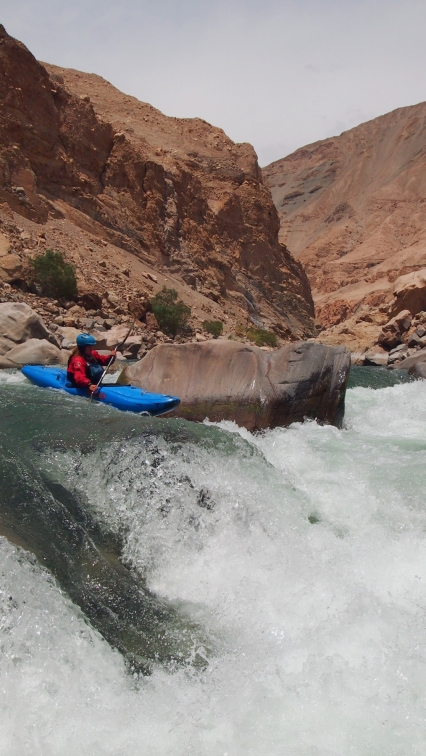 Like many kayakers, Anne worked as a raft guide throughout university, a job that allowed her to live and work close to high quality kayaking. Then, in 2013, Anna met Bernie Steidl, founder of the river conservation movement Wildwasser Erhalten Tirol. “He was fighting hard to protect his homerun, the Ruetz in the Stubai Valley close to Innsbruck, from massive hydropower development,” she says. In a desperate, last-ditch effort to show locals that the free-flowing river has touristic and economic value, Bernie had a crazy idea to start a rafting company on the river.

“The section is pretty hard to raft and no one had commercially rafted it before,” explains Anne. “It’s a typical Tyrolian glacial melt river, with steep, rocky, continuous sections that are very technical, very different from typical rivers people raft here. I was more than hesitant, but Bernie had enough enthusiasm for the both of us. I was in too deep when I realized Bernie had never worked as raft guide before and didn’t have time to run a rafting company!” 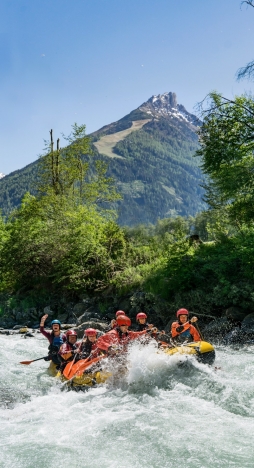 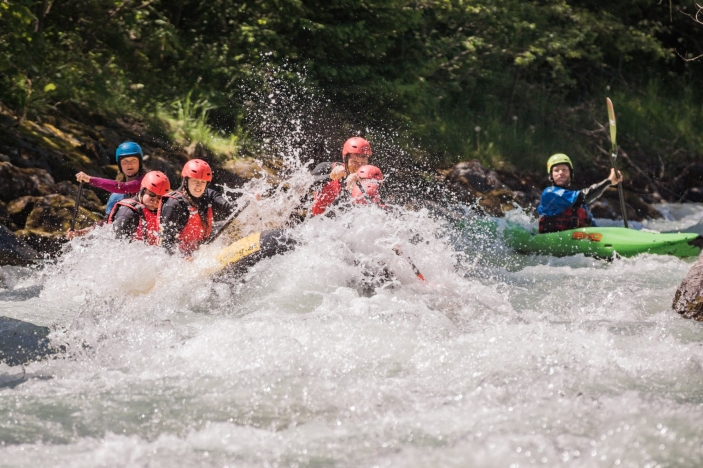 Anne took over management and guiding and has been running the rafting base in Stubai since it opened in 2014. Despite local skepticism, Anne turned the rafting company—that was more a conservation strategy than a business plan—into a viable and successful business. “We started with two small rafts and 12 neoprenes and I think no one expected it to ever become viable. But it is now, and I’m really proud. We run two different sections of the Ruetz now, as well as one section on the Inn in Innsbruck. We have a handful of rafts and two handfuls of awesome people guiding with me.”

In Austria, commercial rafting is mass tourism and the summer high season is hectic. And each day, Anne shares the river intimately with guests, deepening that first connection she had with rivers. “I like being on the river and I like to show people this place—bringing people to a place where they wouldn’t get to if they weren’t on a raft.”

Anne has shown the Ruetz to thousands of people. Although very few locals come rafting, she says that those who do are blown away by what is just a few hundred meters from their home, concealed by trees, rock and their own fear of the river. However, despite their best efforts, construction on a hydroelectric dam started in early 2021, and by 2026 the river will be dry.

Naturally, Anne fears for the safety of rivers around the world. Once the rafts are stacked and the wetsuits washed, Anne directs her energy into volunteering to support river conservation globally and close to home. “When Free Rivers Fund (FRF) was founded, I wanted to be part of it,” she says.

Free Rivers Fund collects donations from adventure and outdoor sports companies and distributes the funds to river conservation activists. “FRF partners with companies in the paddlesports industry, but is also building up co-operations with kayak clubs, and accepts private donations,” she says. “The idea is to give financial support to those who spend their free time protecting rivers from being dammed. Our intention is for the process to be as easy as possible for small grassroots projects to access money to help protect their rivers.”

In 2017, the FRF gave grants to three founding projects. In 2020, they awarded 14 full grants plus one emergency grant. “We are getting grant applications from all over the world and even though we cannot grant all of them, it’s so cool to see how many people in so many places fighting for their rivers in so many different ways.”

Together with Marieke Vogt, Anna co-manages FRF during her off-river time. She writes website content, manages social media, newsletters and last winter took over brand and partner communication. It’s a big undertaking for such a small team. “It’s a lot of work, and there is always so much more we could do—but on a voluntary basis there is only so much time you can put into it.” Anne and Marieke dream of being able to expand FRF, apply for more funding and thus be able to support more river conservation initiatives. “I would like to see the FRF logo within the kayaking industry as a kind of ‘rule and not an exception,’” she says. “That if you’re making money with river sports equipment it becomes standard to give back to protect rivers.”

In addition to FRF, both of Marieke and Anne are also very active with WET, with recent actions focused on petitioning and protesting to protect their homeruns in Tyrol including the former Sickline racecourse on Ötztal’s Wellerbrücke rapids, from hydroelectric dams. They’re presently busy organizing an event series called Innsbruck for Rivers which kicked off this summer. Through activities like street chalk art, street music and a poetry slam, the events focus on getting non-river people interested and aware of their home rivers. “We realized at some point that it’s not helping anyone if just kayakers are standing at construction sites yelling and screaming if no one else really cares,” she says. “This is an entertainment event under the theme of saving rivers, so we will have a stage to talk about rivers to local people.” 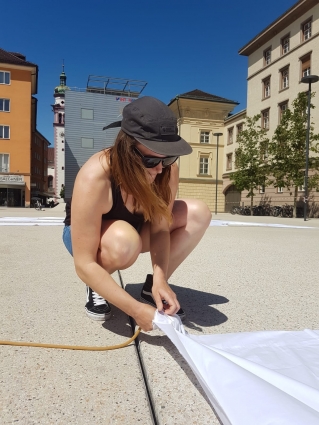 One could describe Anne Steven’s kayaking style as cautious with an attention to detail and a healthy dose of respect for rivers. This caution lets her experience the river at a slower pace, offering her a different perspective than some paddlers. “I get super stoked on the little things, like catching eddies, hitting boofs,” she says. “I just really enjoy boating and that feeling of being at the bottom of a rapid and being super proud and super stoked.” Whitewater has given Anne purpose, community, freedom and in turn she has given back through her work with FRF, WET and showing people the Ruetz via raft.

“Even though I’m sometimes scared while kayaking, I find rivers super soothing. I love how they change with the seasons and even during the day. And for me, the best days on the river depend mainly on the people you’re with.” In kayaking, as in life, overcoming fear leads to freedom. And that’s what the rivers provide for Anne, and for all of us.