The Evolution of a Kayaking Expedition on the Ubaye River

Over the years, filmmaking has taken us to some very unique places around the world. We’ve always used the trip or the river as the guideline for our adventures. The crew has changed, though, as lifestyles have transitioned—some of us feeling as if we don’t have enough time for expeditions and others don’t want to fly across the planet anymore.

In the meantime, Hugo has been thinking of shooting a new documentary focusing on the river as its main character instead of a team of kayak bums. The river as a character, from its birth to its death, from source to sea and everything happening in between asking ourselves: “What is a river?” On the hunt for the perfect ‘actress,’ we didn’t need to search far from home. High in the Alps, the Ubaye River stood out immediately. 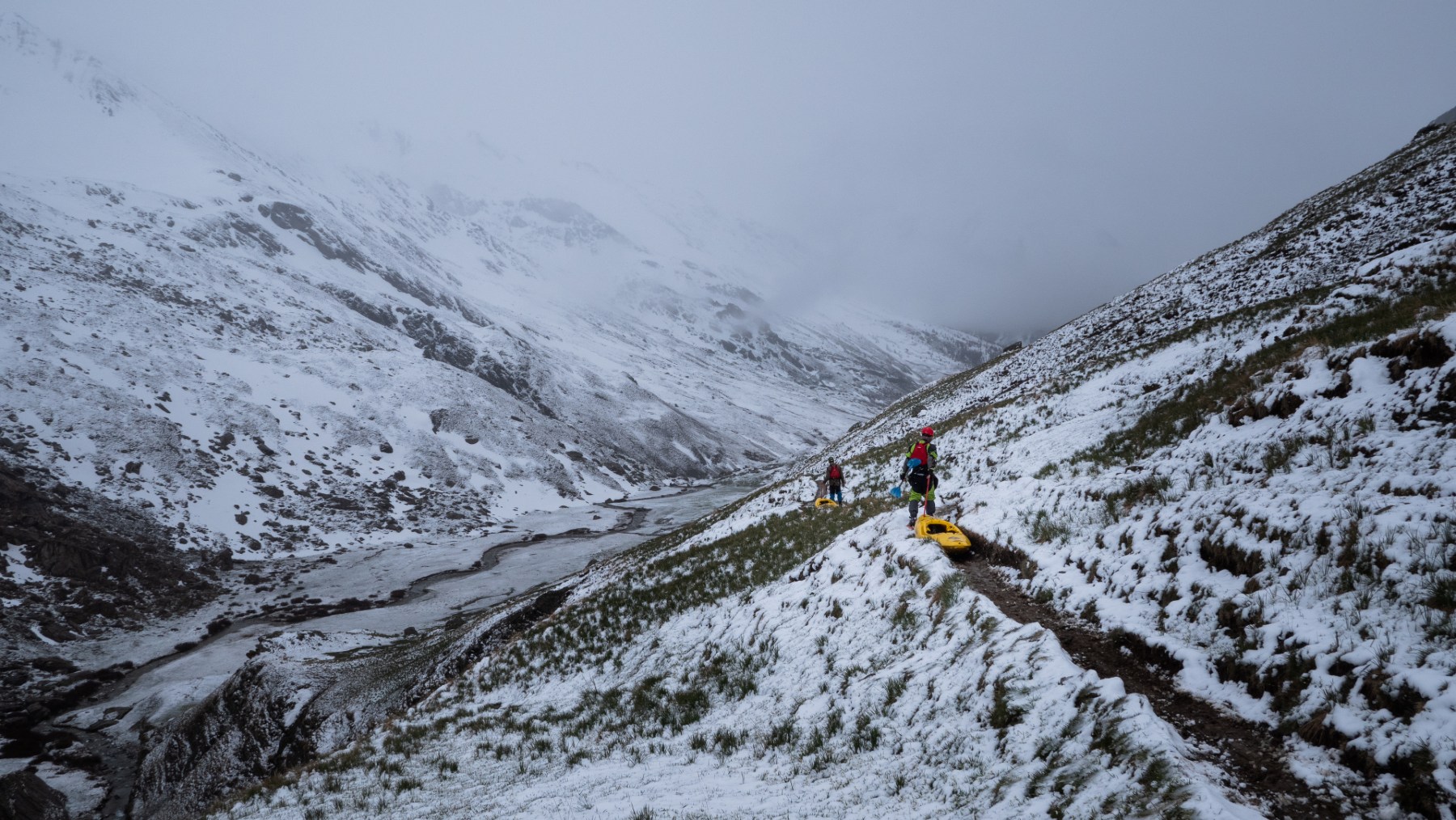 We all knew the three classic whitewater parts of the Ubaye River and had paddled them several times over the past years. But somehow, we had never thought of going upstream to look at the rest of the river or find its source at the Italian border. Nobody lives up there and we still consider the place as wild as it can be even if hikers and sheep pace up and down in the summer and skiers tour the area in winter. We don’t know much about the river after the Ubaye meets the Durance River in the manmade Serre Ponçon Lake. From there on, numerous dams block and slow the river’s current and the quieter whitewater would encourage us to switch from kayaks to canoes.

The plan sounded good, except for two details: when should we go and how do we access the headwaters? We ended up choosing a fairly random date of departure, May 20, hoping the levels would be fair. And we had two options for reaching the river’s source. Option 1:  go from the end of the road up the Ubaye Valley. Or option 2: start one valley north and hike through a supposedly easy pass. Either way we would have to carry our kayaks a long way up, most likely in snow. Indeed, a kayak isn’t any practical thing to carry to the top of a mountain pass but if you’re hoping to paddle from the source, then it must be done. We chose option two and started to plan. 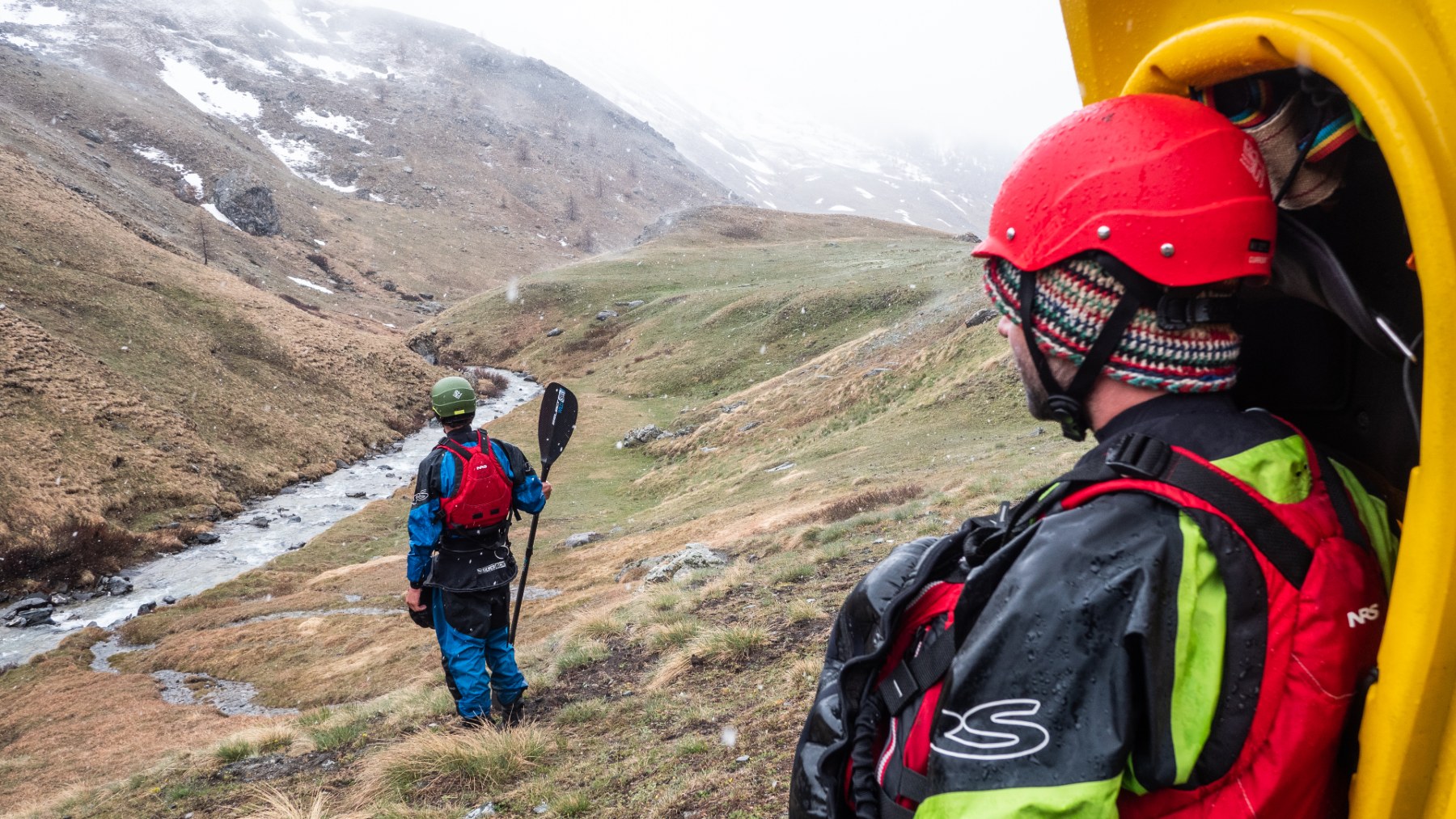 The winter had been dry, resulting in a thin snowpack. So thin, in fact, we wanted to believe the hike would be simple. Until April showed up and the snow started falling. By May 20th, (almost) everything was ready, and the forecast predicted fresh snow. We hiked only a short distance before changing into snowshoes! How awkward and wrong it felt—and so our quest began.

Unfortunately, the weather forecast wasn’t a mistake and the 20 centimeters of fresh snow made our hike even more difficult. Carrying, pulling, pushing the boats—we gave every method a try during the exhausting ascent. Reaching the pass was a relief but not the end of the day. When the Ubaye Valley unfolded in front of us, it gave us just the motivation we needed to keep going. 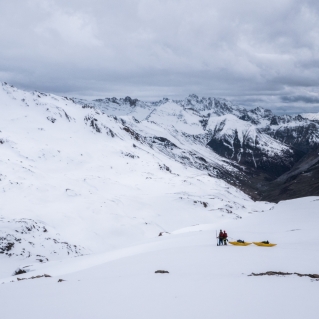 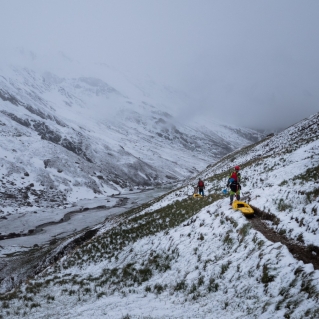 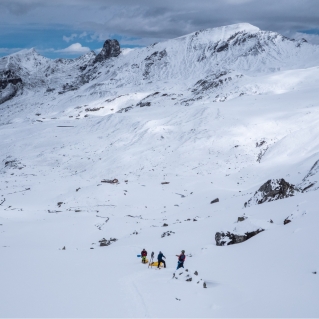 We decided to consider the Longet Lake as the source of the Ubaye. Right on the border of Italy, snow covered the lake, so it was impossible to note its true source. It seemed as if the water could escape at any end of the lake. Except for the sounds of the wind and birds, everything was quiet as we hunted for the birth of the river. Just downstream of the lake, a shy muffled sound under the snow indicated the start of the Ubaye. It was a pretty cool feeling to hear, but not see, the river that we planned to follow all the way down. Soon the stream appeared and quickly grew, thanks to various other tributaries flowing in from everywhere. Though, the kayaks didn’t stand a chance to float quite yet. We kept going by foot.

Cold nights and new snow prevented the river from fully melting, which forced us to continue the descent on land. Soon we encountered the first human infrastructures: footbridges and a small old dyke coming from a disused mining pit.

After descending nearly 800 meters of elevation below Longet Lake, with only a few short stints of paddling, we finally managed to start kayaking for good. Or so we thought. 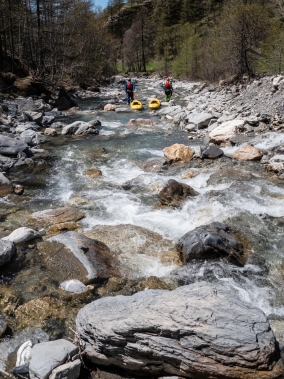 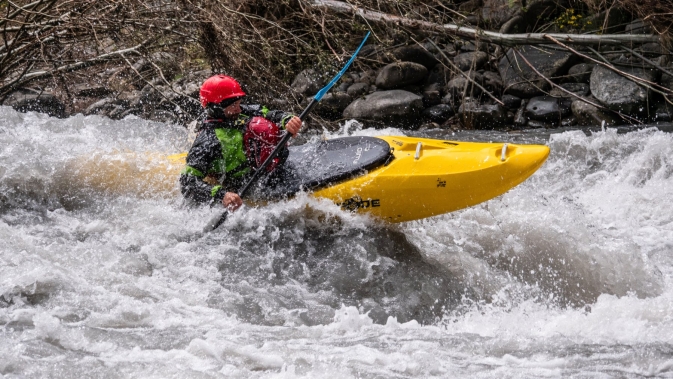 We had sat in our boats for only a couple of kilometers before the river revealed new human changes. The footbridges became vehicular bridges, the banks reinforced and suddenly the water disappeared! The whole river drained through metal gratings and barely 10% reappeared at the bottom of the tiny dam. For 2.5 kilometers the river was deprived of its constitution, left for dead in the middle of the spring when it should have been raging down the valley. A hydropower plant finally returned the stolen water, and the whitewater became really exciting despite numerous portages, as we neared the crux of our descent. 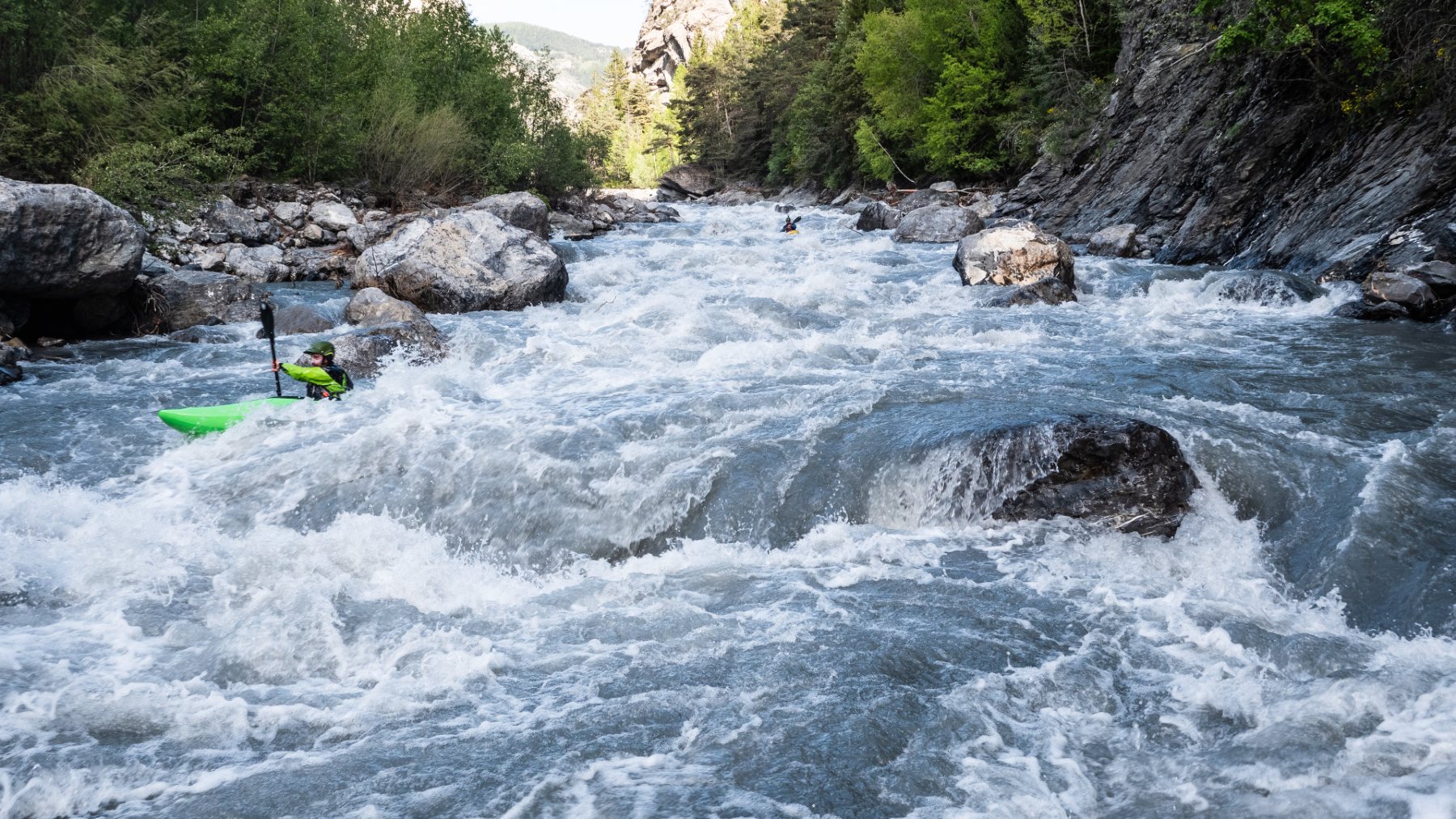 Beyond the Chatelet Bridge awaited a deep gorge that is unrunnable at high flows. Fortunately, the water level looked ideally low and we managed to move on at a satisfying pace feeling so small in such a hostile place. We were treated with 50 kilometers of whitewater before the presence of humans increased drastically. As we approached the more famous sections of the Ubaye, roads, tunnels, power lines and towns appeared. Here the levels were on the high side and made for an intense couple of days. But as we paddled toward the lake, beautiful gorges disguised the civilization beyond the riverbanks, letting us forget about humans for a few kilometers. 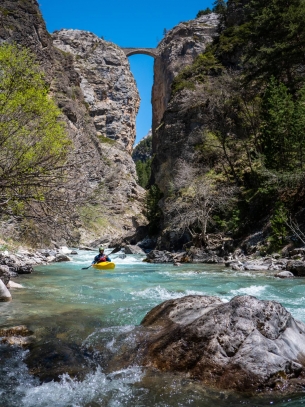 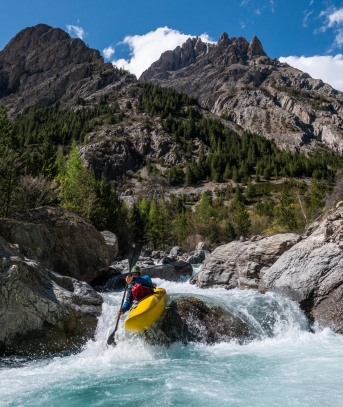 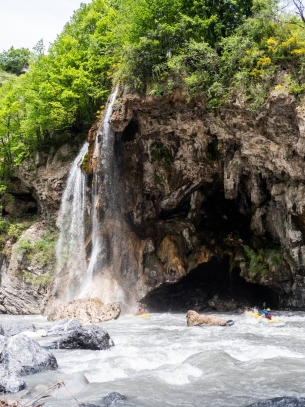 Inevitably the powerful whitewater flattened into a humongous man-made lake—Serre Ponçon—turning the lively grey water of the Ubaye and Durance rivers into a dead blue source of outdoor recreation—and electricity.

We switched to canoes to cross the lake and descend the Durance. Unlike the Ubaye, the Durance suffered from a jerky and absurd flow evolution. Instead of continuing to increase, the water flow in the natural bed was systematically contained to about 10m³/s after each dam even though 200m³/s enter the Serre Ponçon Lake. Where are those 190m³/s going then? Well, in a straight concrete canal. The river has clearly been set aside and only viewed as a resource for humans to exploit. Yet, the natural bed refused to fully surrender and continued to feed into a thriving ecosystem. Nature will always prove its resilience despite the obstacles humans put in the way. 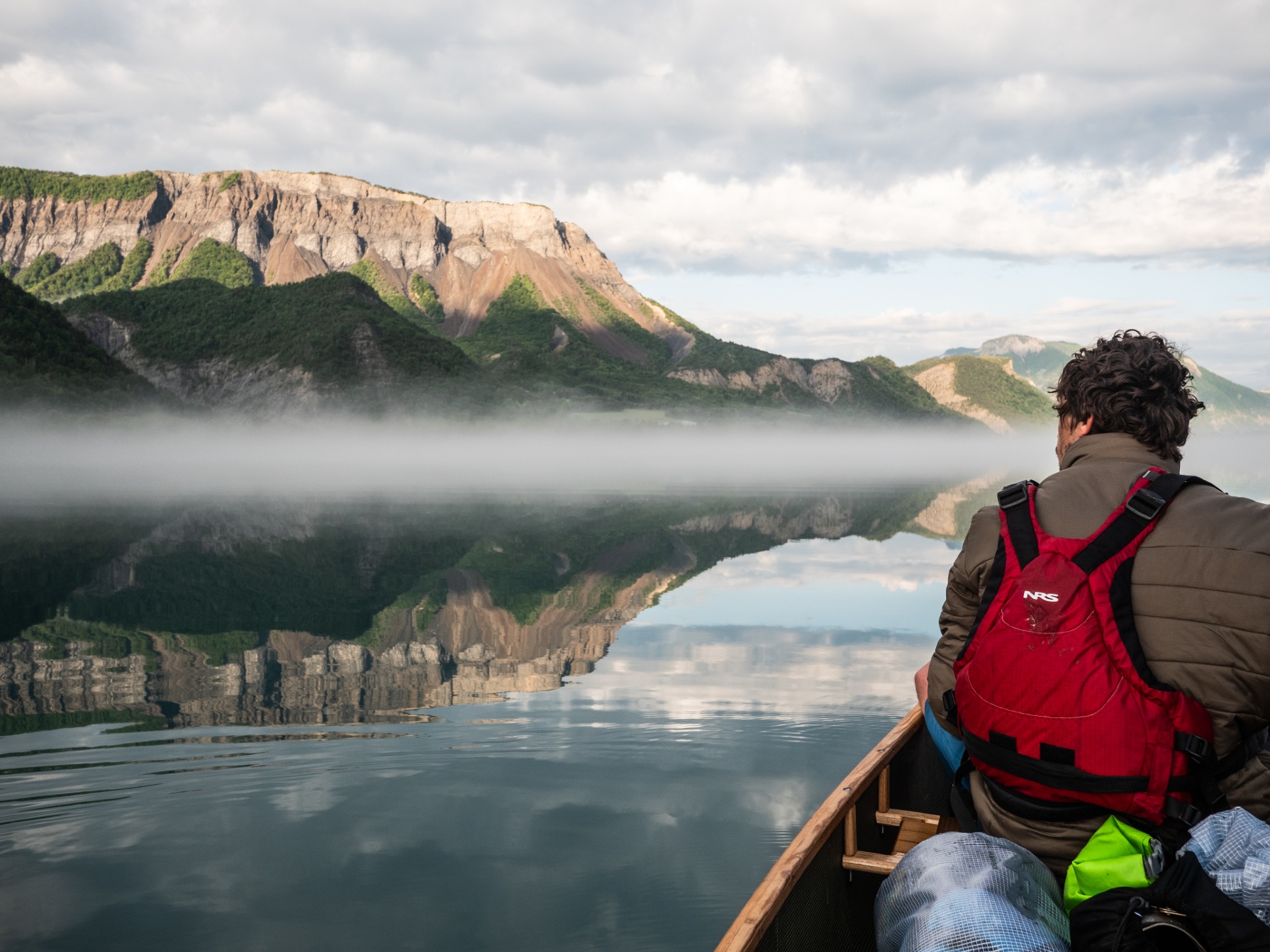 For us though, the obstacles were literally concrete and we ended up portaging nine major dams and 11 small ones along the descent of the Durance. To top it all, highways and trains entered the scene along the banks, which made it very tricky to exit the wide riverbed to go shop for supplies.

As we neared the confluence with the Rhone, villages perched on the tops of the hills or cliffs, away from the river, which testified to the power of the floods such a river can create. The mountains flattened and the valley widened. Even before we reached the confluence with the Rhone, the wind gusted and we had a hard time keeping our canoes straight. 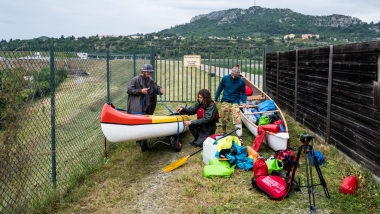 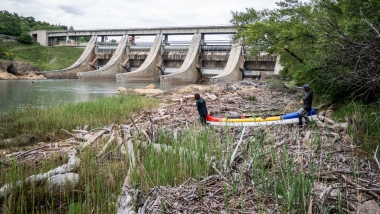 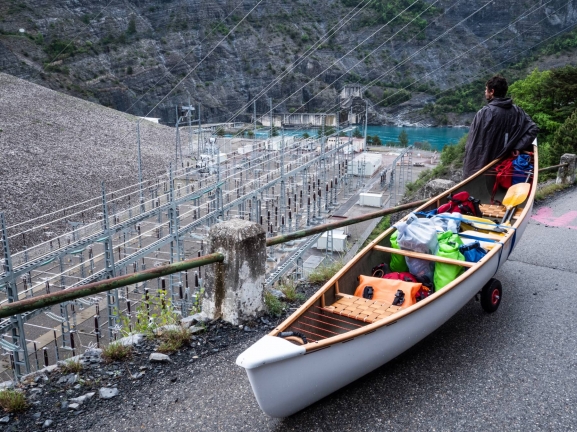 When we finally reached the Rhone, the river had changed completely. The current disappeared, the water became canalized on both sides, the wind so powerful that waves crashed and gigantic barges carrying incredible amounts of goods traveled up and down. We felt like total strangers in the middle of this scene and so we surrendered to the facts and gave up on the final 80 kilometers to reach our goal.

Even though we didn’t manage to reach the sea, we still considered the trip a success. We managed, as a team, to follow the river as close as possible looking at it in a different way than usual and through our expedition, we can share with the world the resilience of nature. 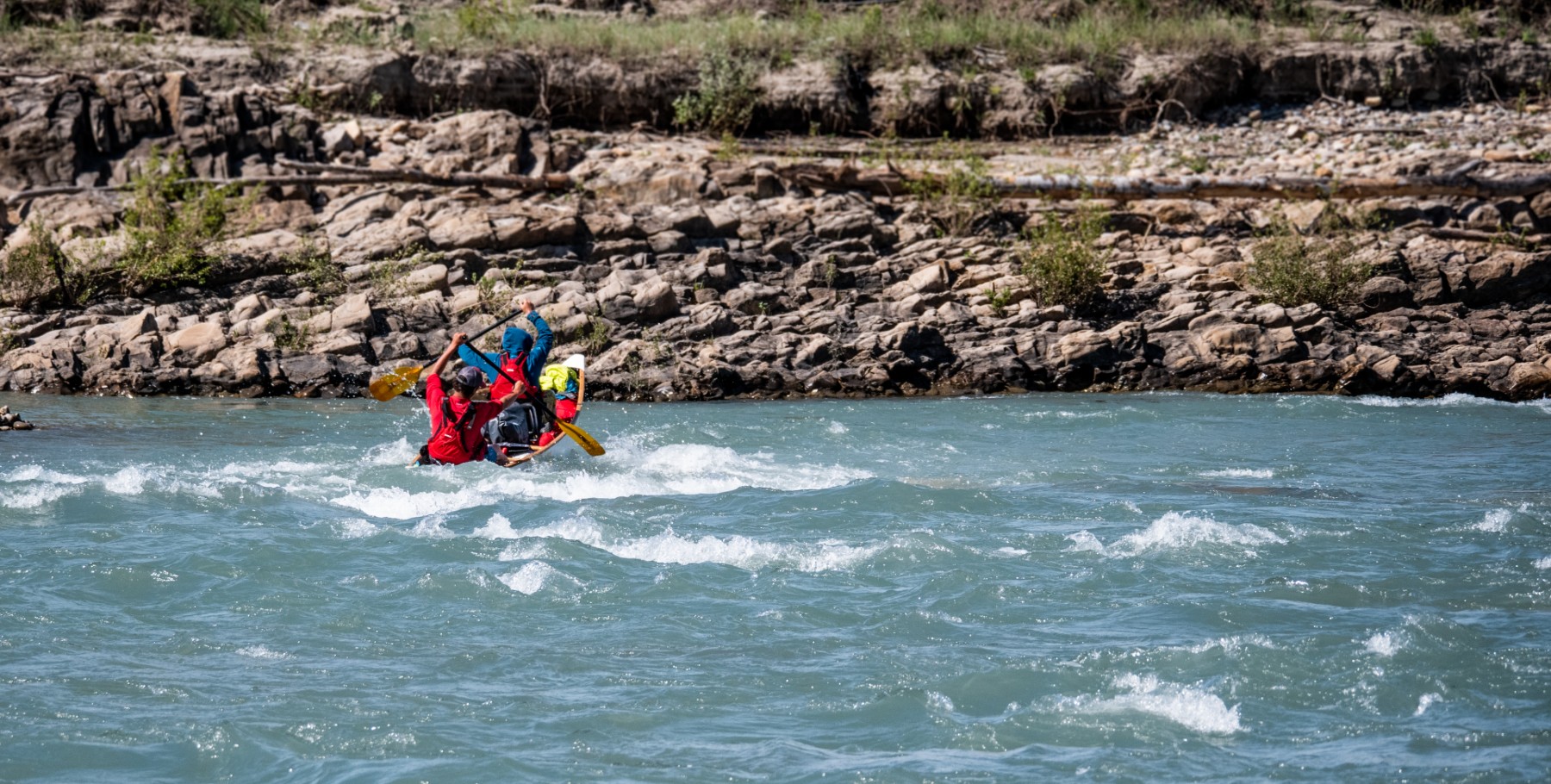 Editor’s Note: Words by Mathieu Coldebella; Photos by We Are Hungry. Click here for more stories and films from the WAH crew.