WhatSUP With Our Rivers: A 10-Day Paddle from Bristol to London

Monday morning, downtown Newbury, England. People are rushing to work, crisscrossing—by foot, bike and car—over the River Kennet. Most are oblivious to the water running under them. It’s safe to say, they’re also unaware of the interconnected waterway that transects southern England connecting the Bristol Channel to the English Channel. If they took a few moments to look downstream, they might see three paddlers and two dogs perched just centimeters above water level on three inflatable SUP boards. Unlike the hustle of the morning commute, these three are starting their morning in a slower, calmer way.

The team is just over halfway through a ten-day, 160-mile (260 km) SUP trip from the coastal town of Bristol to London via rivers and canals. Their intention is to draw awareness to the rivers that run through the villages, towns and cities, to show—from a water-level perspective—the recreational and environmental importance of rivers in the UK and to shed light on the many threats that these waterways face.

Harriet, Anneka and Beckii met through paddling at the Swansea University Canoe Club. They hatched a plan to help generate awareness and excitement about both World Rivers Day (September 26, 2021), and the release of the State of Our Rivers Report from the prominent UK river conservation organization, The Rivers Trust. They decided to put their paddles in the water to, literally and figuratively, stand up for their rivers.

Harriet Alvis worked at The Rivers Trust for seven years before transitioning into a consultant position focusing on restoration and freshwater fisheries. Anneka Franceis currently works for The Rivers Trust as a Geographic Information System (GIS) Analyst. She spends most of her days collecting and crunching environmental data and making maps. Beckii Waters works in the paddlesports industry, originally as an instructor but now as the office manager for Escape Watersports.

On Wednesday, September 15, the three set out at low tide. They started on the intricate lock system of the River Avon. From there, they would paddle the historic Kennet and Avon Canal before drifting through the unique habitats along the River Kennet, one of England’s most important chalk streams and home to a range of wildlife such as the brown trout, kingfisher and otter. And finally, they would join the famous River Thames and paddle into London.

Stand-up paddling between 20 and 40 kilometers per day, the State of Our Rivers Report came alive for the trio, as they got to see, (smell) and feel the issues rivers of the UK face, reinforcing the objective of their trip—before you can properly stand up for something, you need to truly get to know it. And if their clever and playful tour name—WhatSUP With Our Rivers—isn’t an indication, these girls like to have fun.

NRS caught up with the trio following the completion of their trip. 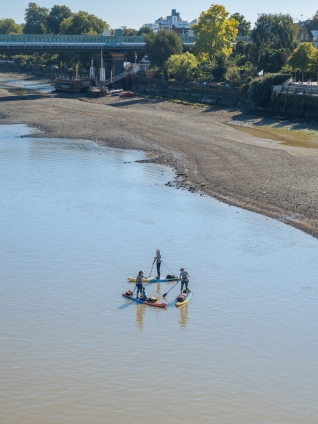 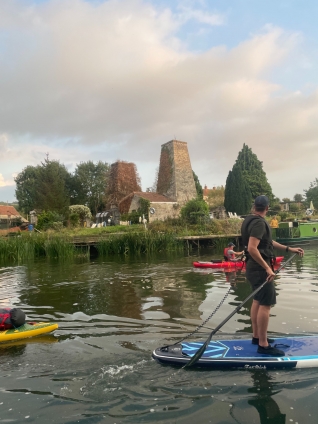 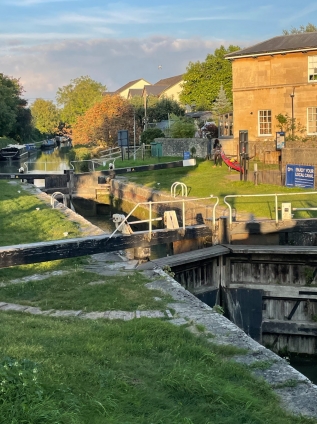 NRS: Who came up with the idea of the WhatSUP With Our Rivers trip?
Anneka: I was discussing ideas with my colleagues at The Rivers Trust about how to promote both our report on the State of Our Rivers and World Rivers Day, and it struck me that a paddling challenge would be the perfect way to see the issues our report highlighted first hand. I knew that there was a route from Bristol to London that wouldn’t require any overland travel (other than portaging dams and locks) and thought we could chat to people on the riverbank along the way. I called up Harriet and Beckii who, with blind ignorance, agreed to come along for the ride.

NRS: Why stand-up paddleboards?
Anneka: All three of us are seasoned kayakers, but I suggested we take inflatable SUPs so that we could deflate them at night. They would also be lighter for portaging the locks along the way. Turns out it was actually 106 locks which worked out as one portage for every 2.5 kilometers we paddled. In the end, there was quite some overland travel but luckily no need to deflate the boards!

NRS: This trip was supported by The Rivers Trust. What does this river conservation organization do and why did you collaborate?
Harriet: We really value The Rivers Trust and their on-the-ground approach to river conservation. They get their feet wet and their hands dirty. Our rivers are in a horrendous state, with not one of them achieving good water quality status in the last Water Framework Directive target round. (The Water Framework Directive is an EU directive that commits to achieve good qualitative and quantitative status of all water bodies.) The Rivers Trust is working hard to hold governments accountable and to engage with communities, encouraging locals to learn about and value their rivers more, which we feel is so important. Why would you be interested in protecting something you know nothing about!

NRS: What is the State of Our Rivers Report that you are drawing attention to?
Beckii: The State of Our Rivers Report sheds light on the critical facts that water scientists and the government already know. But by making this data publicly accessible (and digestible), The Rivers Trust is arming locals with the science citizens need to hold the government and local polluters accountable. The report will let people better understand what is happening in local rivers throughout England and provide tips on what can be done to protect and restore them.

NRS: What was the main objective of the tour?
Harriet: We have been looking for a big adventure for a while now, and we thought what better way to do one than by helping to raise awareness about the State of Our Rivers Report and talking to people about what we can do to improve the health of our waterways. Additionally, we are all really passionate about water quality in rivers. Not just in terms of its impact on aquatic wildlife, but also because we’re tired of worrying about how clean the water in which we paddle or swim is. (We’re all fed up with paddling past floating turds!) We really support the Rivers Trust’s Together for Rivers Campaign to end sewage pollution in our rivers, as well as their work to reduce other forms of pollution, such as agricultural and industrial. This trip was a great way to support both initiatives.

NRS: On your webpage, you list many threats that UK rivers face, from water pollution to habitat modification, forestry and barriers. Based on what you saw on your trip, which threat is most serious?
Harriet: I believe that the main issue facing our rivers is habitat loss and modification. Nowadays, our mental image of a river is of a wide, straight and deep singular channel; however, this is a long way from their original state before humans modified the rivers for land drainage, development and navigation. This diversity of flows, depths and habitat makes rivers more resilient to both water quality issues and climatic changes. However, straightening, deepening, and adding weirs to our rivers does the opposite. Rivers that take a more natural form are more resilient to water pollution, however, because rivers today are so modified, they’re even more vulnerable to the threats from wide-ranging pollution from industry, agriculture, sewage, roads and many more sources.

NRS: You were also collecting water samples throughout the trip. What were you testing for?
Harriet: The Proteus Instruments Team joined us and paddled a kayak equipped with a water quality probe attached to the bottom of the boat. This meant we had access to the most modern high specification fluorometer, an instrument that measures Biological Oxygen Demand (BOD), aka how much oxygen is needed to break down organic matter in water. This number increases with the amount of water pollution present, including the bacteria present in animal and human feces, which indicates sewage and agricultural pollution.

The probe provided continuous GPS-stamped data every five minutes for the entire 160-kilometer trip, which makes it possible to get a more holistic understanding of river pollution. The Rivers Trust will use the information to identify hotspots where pollution is entering the river, allowing further investigation into the sources and the appropriate ways to prevent water pollution.

While we paddled together for a portion of the trip, we eventually had to part ways, as we needed to keep moving and their sampling required many stops.

NRS: Was the public invited to join and paddle with you? Did you have many participants?
Beckii: We hoped that inviting people to join us would help raise awareness for both our trip and the threats our rivers face. The first day we had some lovely ladies join us and they did a litter pick up along the way. One woman, Julia, joined us for over half the trip with her sea kayak including the section of the trip with the most locks. She did an amazing job portaging her kayak around those! We also had a friend, Ali, who joined us for four days. He was a great help to us both in enthusiasm and helping us carry kit on the portages. More friends joined us for day trips providing much-appreciated support and morale boost. For our final day, it was just the three of us paddling, which provided a nice closure for the trip.

NRS: You also had some four-legged companions with you. What’s it like to SUP with a dog for 10 days?
Beckii: Harriet had her dog Teifi with her, and my dog Ruby was on my board. The dogs are our best friends and come everywhere with us, so it only seemed fitting that they came on this trip too. We put waterproof dog beds on our boards to make sure they had a comfortable resting place to sleep and chill and they also had a little run along the towpaths beside us when they could. We made sure we stopped to pick up their waste and carried clean drinking water for them too as the canal did not seem a good option! 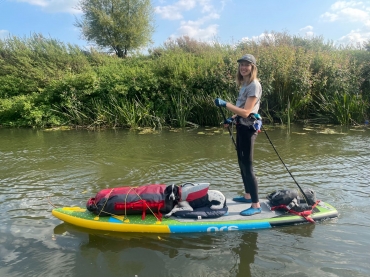 NRS: Any funny stories, mishaps or inspiring moments along the way?
Beckii: We had a few mishaps, one of which included losing a fin on a canal portage. Harriet ended up standing waist-high in canal water in her pants feeling for the fin at the bottom of the muddy water. We did find it in the end!

And during the days we set some entertaining challenges for ourselves, like getting a tow from a canal boat, having a cup of tea given to us from a boat and going on a canal boat. All of which we accomplished. Sadly, canal boats can create discharge and we saw a lot of food waste.

But we were inspired by the kindness of strangers. We camped along the way except for one night a lovely lady (who was following our trip on Facebook), picked us up from the river and drove us to her house for a shower and bed. It was absolute heaven!

All: We would like to say a big thank you to everyone who supported us along the way, from our sponsors; The Rivers Trust, NRS, Escape Watersports, Proteus Equipment, to strangers who gave us words of encouragement and kind gestures along the way and the wonderful people who joined us for legs of the trip.

Editor’s Note: For more info on their trip, their cause and how to get involved in a River Trust, check out the What SUP with Our Rivers website and their interactive map and The Rivers Trust website.