An Early Warning from an Old Fish

We can hear a deep rumbling in the distance as we approach another blind corner in the river, so we point the bow of our 16-foot Prospector toward the thicket of willows half-submerged in the water and power hard. In the bow of the boat, Griffin closes his eyes as we crash through the bushes, grabbing onto branches until we slow to a stop on the waterline. The sound alone is enough for us to know that we won’t be running this rapid. On this trip, we blame our affinity for portaging on the fact that we’re carrying an extra 50 pounds of scientific equipment. Our canoe is jammed full, but the little 16-foot boat is the biggest one we could fit on the Cessna Caravan on our flight in. 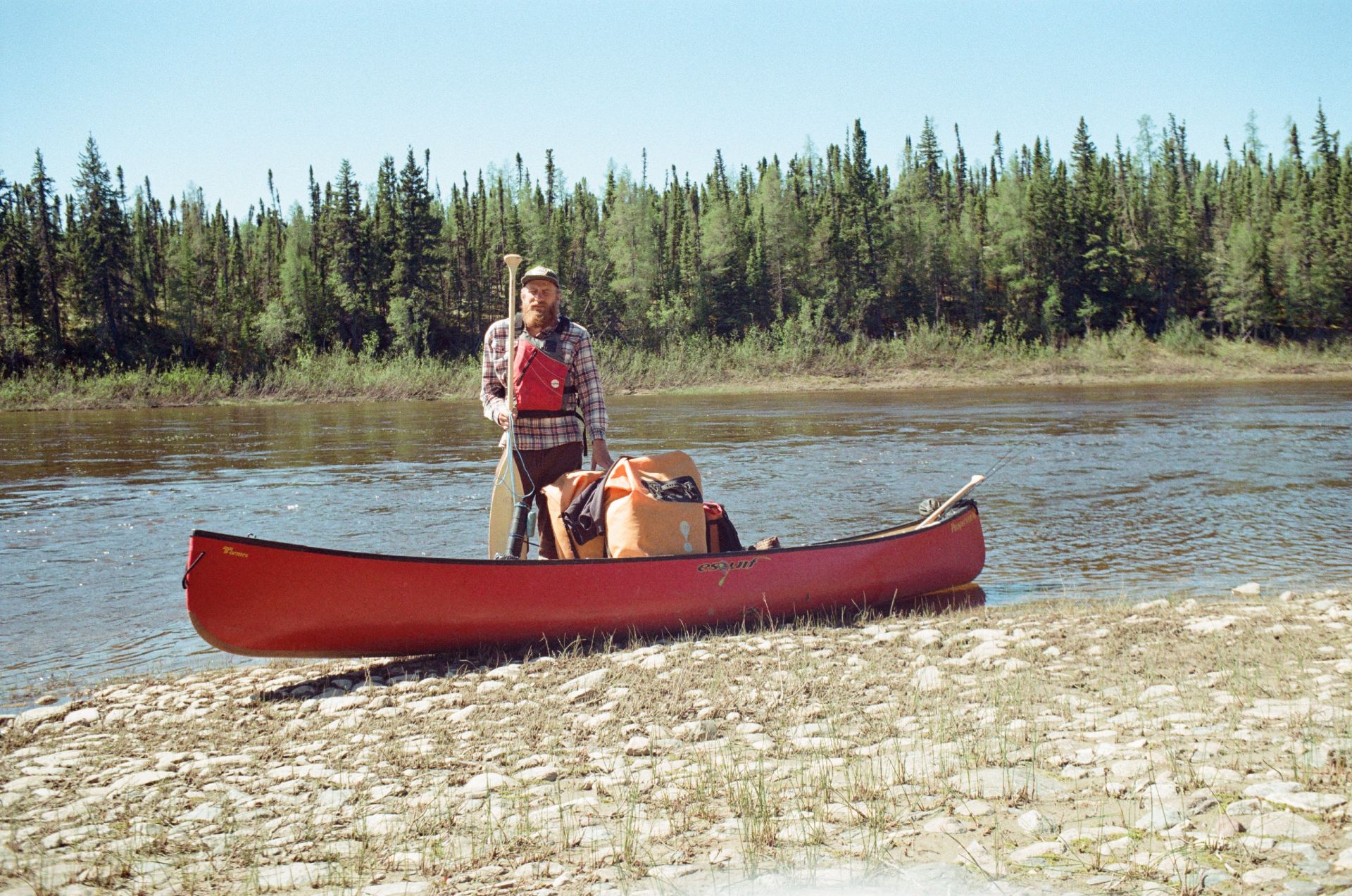 Each with a barrel on our back and no trail to follow, we set out on our first of three trips on this portage, pushing our way through the thick stands of willow, pine and spruce. In these parts of Northern Manitoba, on what is called the Hudson’s Bay Lowlands, dry ground is rare. We walk on what feels like a magic carpet, with the moss and muskeg sinking beneath our every step. The water beneath the muskeg threatens to crest the tops of our rubber boots, and we curse when it finally does.

I once heard a stat that more bloodsucking insects exist in the Hudson’s Bay Lowlands than any other part of North America, and though I cannot back that up with a reference, the thick clouds of biting black flies and mosquitos around us make me think I don’t need to. The bugs cover our faces and ears, they’re in our hair and eventually underneath our shirts and in our pants. We do our best to keep our cool, for it seems that these bloodsuckers like you best when your blood starts to boil.

It’s our fifth portage of the day, so by now we’ve learned that carrying the canoe on your shoulders just isn’t possible in bush this thick. We resort instead to each taking an end and lifting/dragging the boat through the trees and muskeg. Constantly wedged between young spruce, the bottom of the canoe rarely touches the ground. 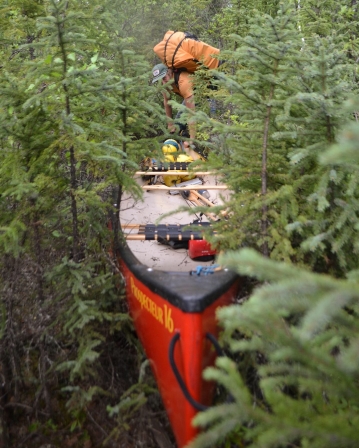 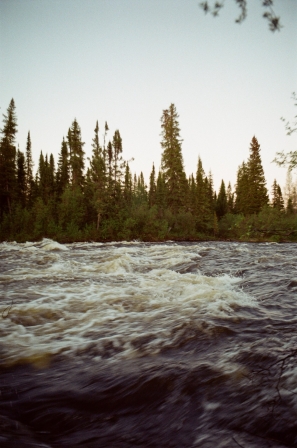 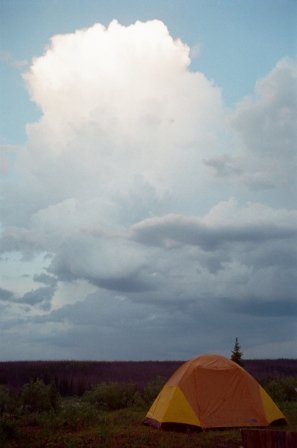 From one of the barrels, we pull out a telemetry receiver, we turn it on, tie it to a rock, paddle it out into the pool below the rapid we just portaged, before throwing it overboard and watching it sink to the depths of the river. Though this kind of hardship is what Griffin and I do for fun, what we’re doing here is in the name of science. 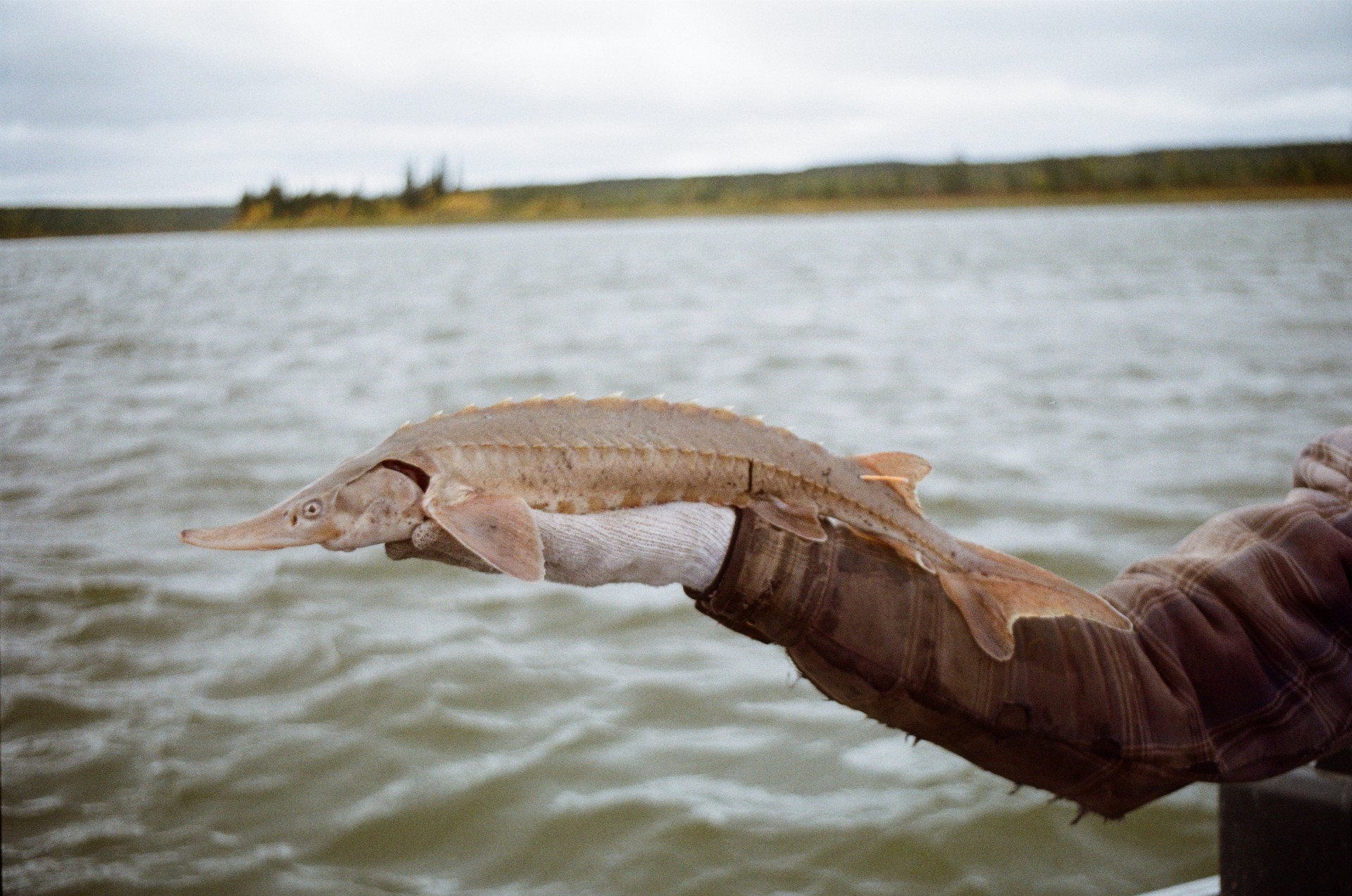 You might think this sounds like a lot of effort for a fish, and quite possibly wondering why. But one glimpse at the prehistoric, shark-like creature that lurks in the depths of the river, and you’ll conclude that this is no ordinary fish.

The lake sturgeon is one of Canada’s largest and most recognizable freshwater fish species. It’s part of an ancient group of fish species that have existed in the Holarctic region for over 200 million years. Often described as a living fossil, their appearance is unique to say the least. They have a streamlined body shape but are covered in sharp bony plates called scutes. They can grow over five feet in length and can weigh up to 80 pounds. These fish are hardy with an average lifespan of 50-80 years.

To Indigenous peoples in Northern Manitoba, sturgeon are not only an important food source, but of particular significance culturally and spiritually, and their importance can be seen in ancient pictographs, and archaeological artifacts and traditional place names. 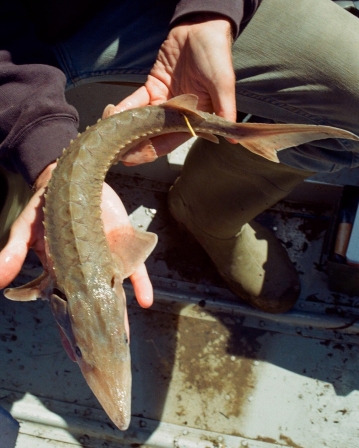 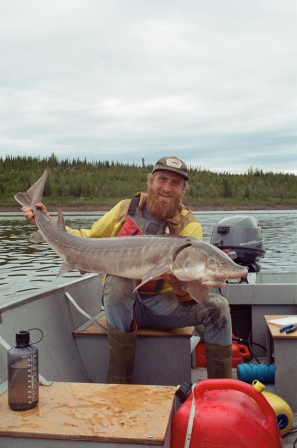 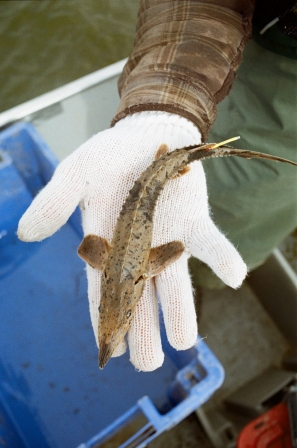 Our time on the Little Churchill was peaceful, but arriving at the confluence, I feel a sense of unease. The ominous silty waters, eroded shorelines and floating trees in the river that lay before us are the tell-tale signs of a dammed river. It is here that we rendezvous with a floatplane, the first person we have seen on our journey so far. The pilot unloads nets, a boat motor, and a crate of food from the aircraft. We plan to stay at the confluence for the next 10 days, netting and tagging sturgeon as part of this study. 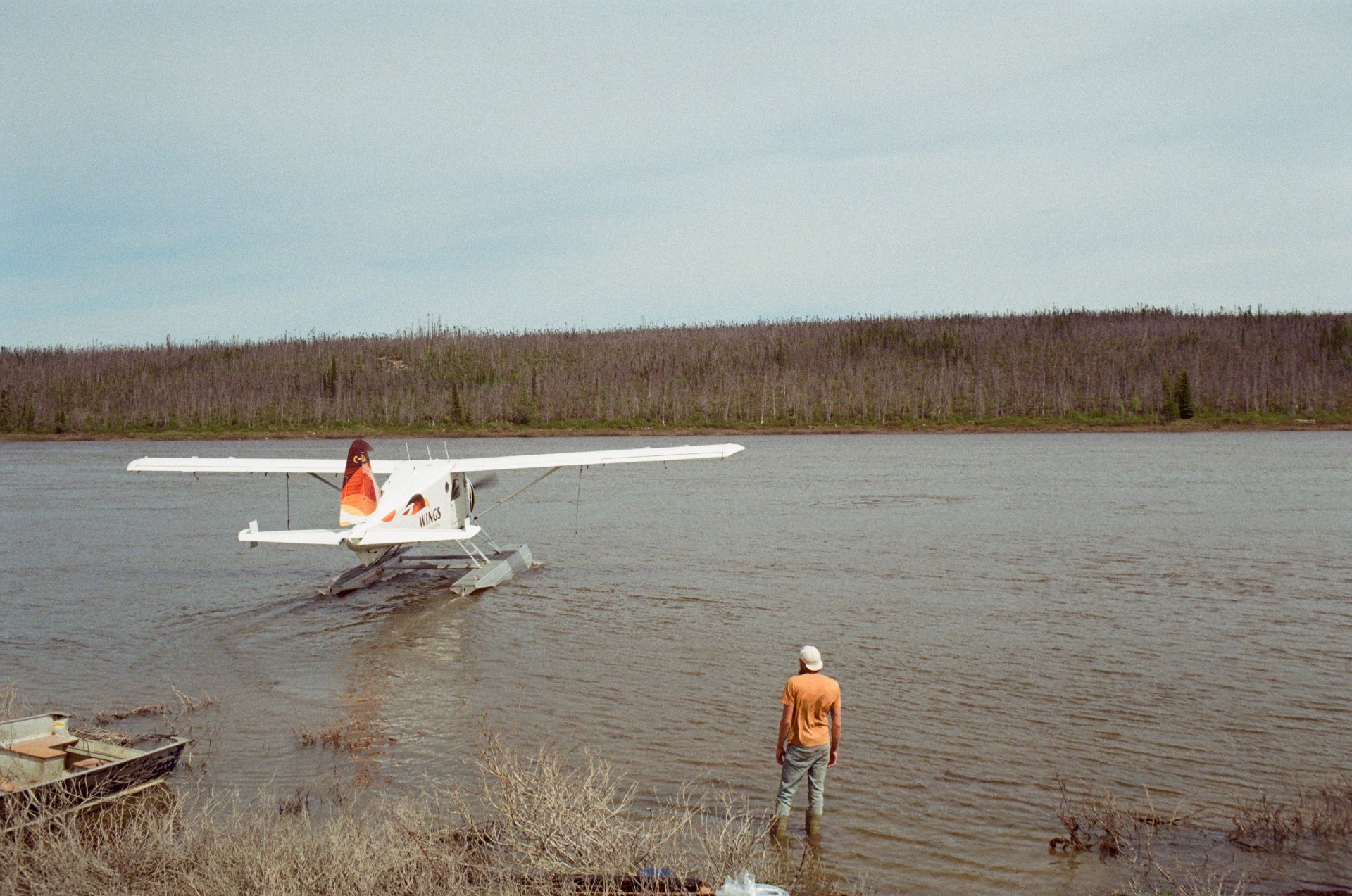 In 1976, the construction on the Missi Falls Control Structure was completed, and since, the Churchill River has never been the same. The structure was built as part of the Churchill River Diversion Project and it has forever changed Northern Manitoba. As part of the project, 85% of the water from the Churchill River has been diverted through the Rat/Burntwood River, before then passing through hydroelectric generating stations on the Nelson River. South Indian Lake, upstream of the control structure was raised by over nine feet, flooding over 830 square kilometers of forest, and displacing the entire community of O-Pipon-Na-Piwin Cree Nation.

The 415 kilometers of river downstream of Missi Falls has been in large part de-watered. Historic average flows were approximately 33,000 CFS, but as part of this project, the flow agreement requires Manitoba Hydro to release a minimum of only 500 CFS, a small fraction of its natural flow. This year is a highwater year in Northern Manitoba, and as a result, the control structure is wide open, dumping way more water than natural flows, completely blowing out the shoreline and riparian areas along the river’s course. Effects from the Churchill River Diversion Project are long-lasting, widespread and devastating to the natural and socio-cultural landscapes of Northern Manitoba.

The lake sturgeon population in the Churchill River system has declined significantly as a result of this large-scale hydroelectric development project and is just one example of the widespread and far-reaching impacts. Lake sturgeon upstream of Missi Falls are believed to be extirpated, or functionally extinct from the local area, as a result of the development carried out in 1976.

On the Lower Churchill River downstream of Missi Falls, in the traditional territory of Tataskweyak Cree Nation (TCN), sturgeon do still exist though they aren’t nearly as abundant as they once were. Griffin and I are here on behalf of TCN collecting population data that will be used to make a case to list lake sturgeon in the Lower Churchill River System as ‘endangered.’ A listing that would grant the species federal protection, and hopefully lead to changes in flow management regimes on this river system. 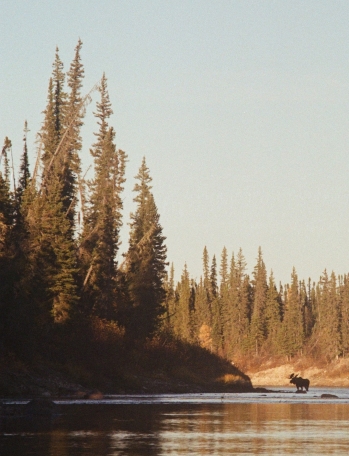 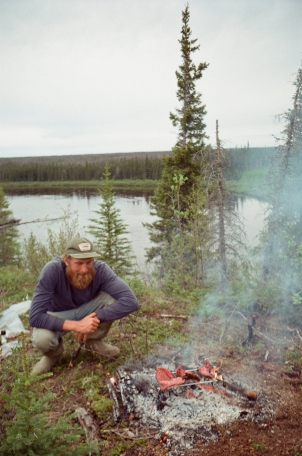 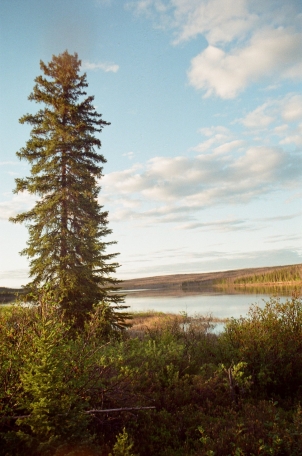 Untangling these fish from our research nets, I am taken back by the strength and resilience of the species. We wrestle against a fish that’s pure muscle, with a body covered in scars from decades of arduous river travel. We measure each fish, weigh it, collect an ageing structure for laboratory analysis and then insert tags beneath its flesh before releasing it back into the river.

After just a few powerful kicks of its tail, the sturgeon returns once again to the depths and I’m left wondering how a species whose ancestors survived dinosaurs and ice ages, is now facing extirpation in the name of development, all to meet the ever-growing needs of civilized society in the south. 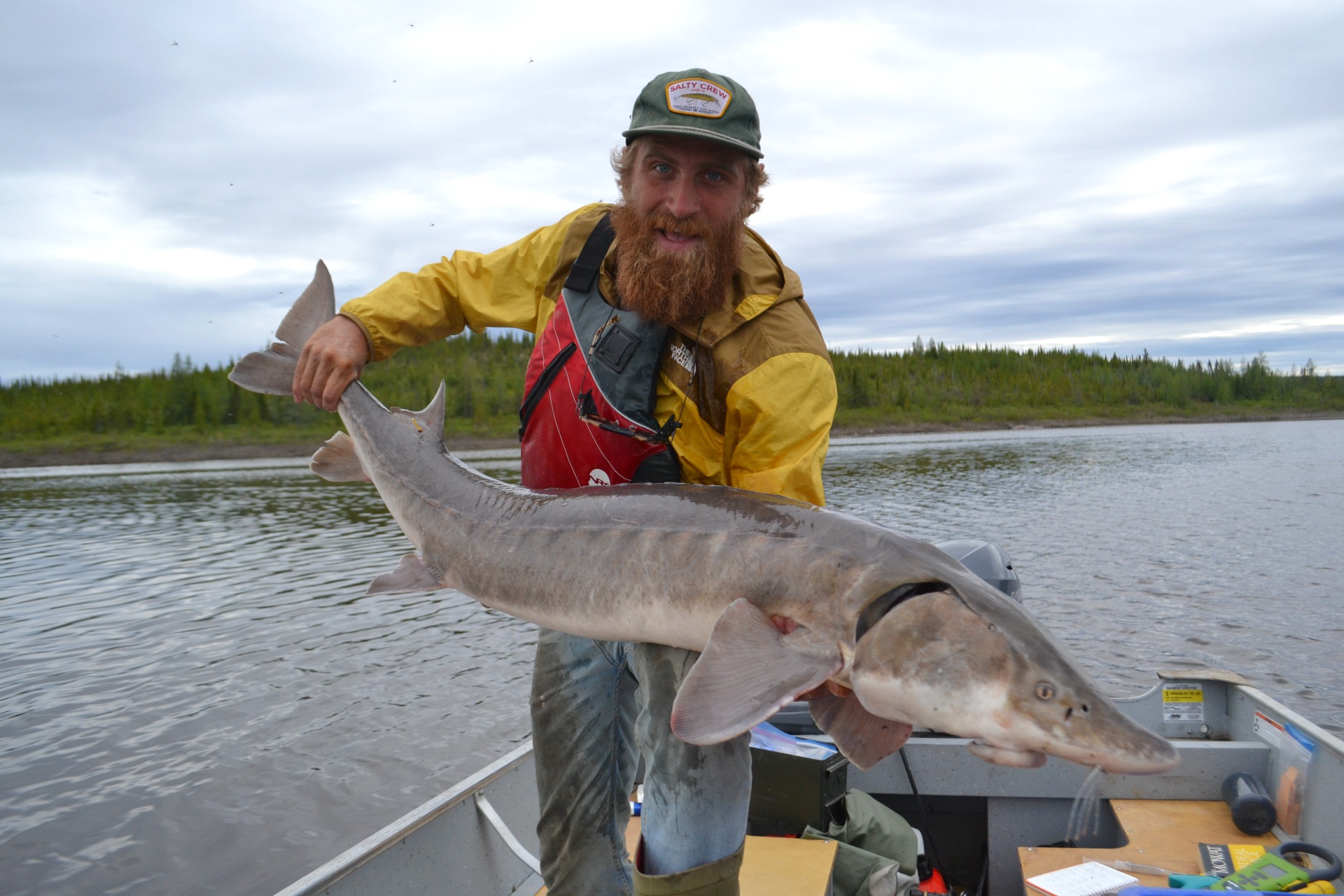 Hydroelectricity is often marketed as ‘sustainable, green energy’ and when flicking the light switch in suburban southern Manitoba, I think very few people question the label. It’s a source of naive pride. A thousand kilometres away, flooded lands, endangered species, relocated communities and lost livelihoods for First Nations communities, suggest the label is a lie.

Though the Churchill River will never be returned to the pristine condition it once was, Griffin and I are hopeful the sturgeon could be the canary in the coal mine to force better management practices for hydroelectric power generation in the area.  We’re proud to be working in partnership with Tataskweyak Cree Nation to help illuminate what has become so very clear to us over these last 20 days—60 years of hydro development on the Churchill River threatens the hardiest of fish.