Toasty Cocktails to Sip by a Fire

While few things are better than a crisp, fizzy beverage after spending the day rowing or paddling under the sun, there’s something to be said about bundling up to sit by a fire during the colder months with your hands wrapped around a steaming mug of [insert favorite toasty beverage here].

Living in North Idaho, the season for warm drinks by a fire extends well beyond the winter months. I can think back on many-a-lunch breaks on the Lochsa in late spring when the drysuit stayed zipped and the jetboil came in clutch. Especially that one dump truck on the falls, but I digress. And whether you’re a—confession—fair-weather boater like me or—also like me—choose the slopes over the rapids this time of year, these drinks taste just as good riverside as they do aprés ski. You can even drink them on your couch. 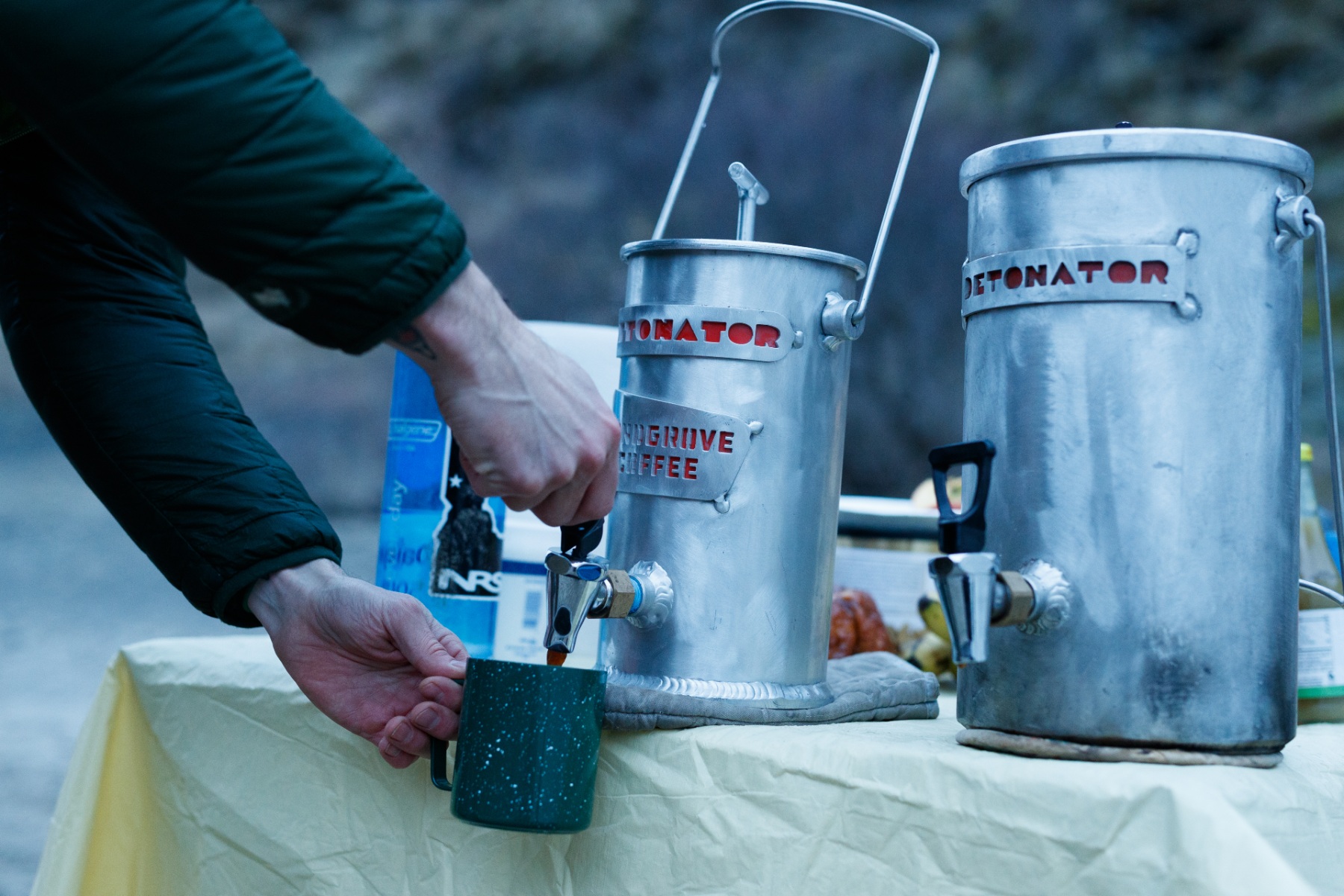 For the Classic Camper: Coffee and Baileys
Coffee and Baileys is by far the easiest toasty cocktail to make on the river. It requires very little prep and zero mixology. But that doesn’t mean this classic morning treat is dull, especially these days. From pumpkin spice and salted caramel to red velvet, Bailey’s Irish Cream has introduced some fun flavors over the years. They even have a dairy-free option—Almande—made with almond and vanilla. Though, in full disclosure, I haven’t tasted that one so I can’t be sure if it curdles like other non-dairy creamers when mixed with hot coffee. (If you have a trick for that, please share.)

For those who need a little more get-me-up (and aren’t captaining a boat later in the day), spike your coffee with a stronger spirit, like whiskey.

Mocktail Option: Mix your favorite creamer into a steaming mug of fresh coffee. Or, if you’re feeling fancy, vigorously whisk 2 tablespoons powdered sugar into 1 cup heavy cream until almost-whipped, pour hot coffee over a tablespoon of brown sugar and slowly top the coffee with the heavy cream. 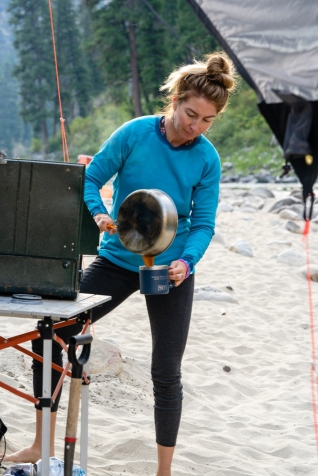 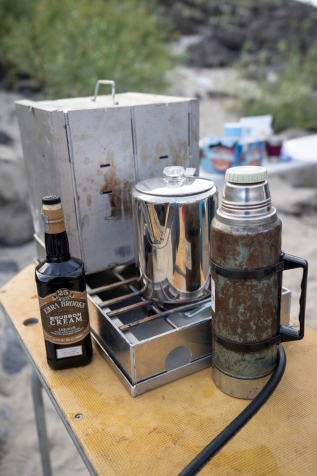 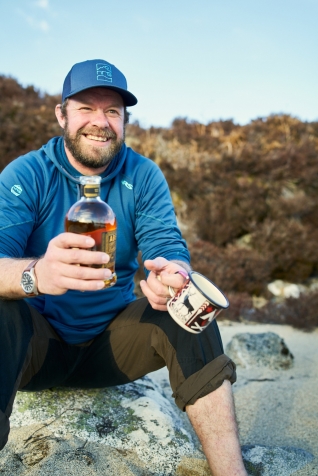 For the River Parents: Spiked Hot Cocoa
The recipes are endless with this traditional by-the-fire drink. I’m only a bonus-mom (ahem, stepmom), but I still understand the importance of convenience. If you’re boating with a few kids, having a box of instant stuff makes the most sense. In that case, start with a packet of cocoa, cut the water by one-quarter and play around with spirit. While already a sweet drink, add a little sugary flavor with marshmallow vodka or salted caramel whiskey or make it extra creamy with a little Baileys or other Irish cream.

If your kids are older, or you’ve been gifted with kids who appreciate made-from-scratch treats, then whip up a batch of homemade cocoa and dish out virgin mugs to the kiddos while spiking the adults’ mugs with their spirit of choice.

Combine all dry ingredients together at home and store in an airtight container. At camp, warm the milk over low heat, being careful not to scorch the milk or bring it to a boil. Add chocolate chips to the milk and stir until the chips are melted. Pour warm chocolate milk over 2 tablespoons of dry mix and stir to combine. If imbibing, add 1 oz of your preferred spirits to the cocoa. 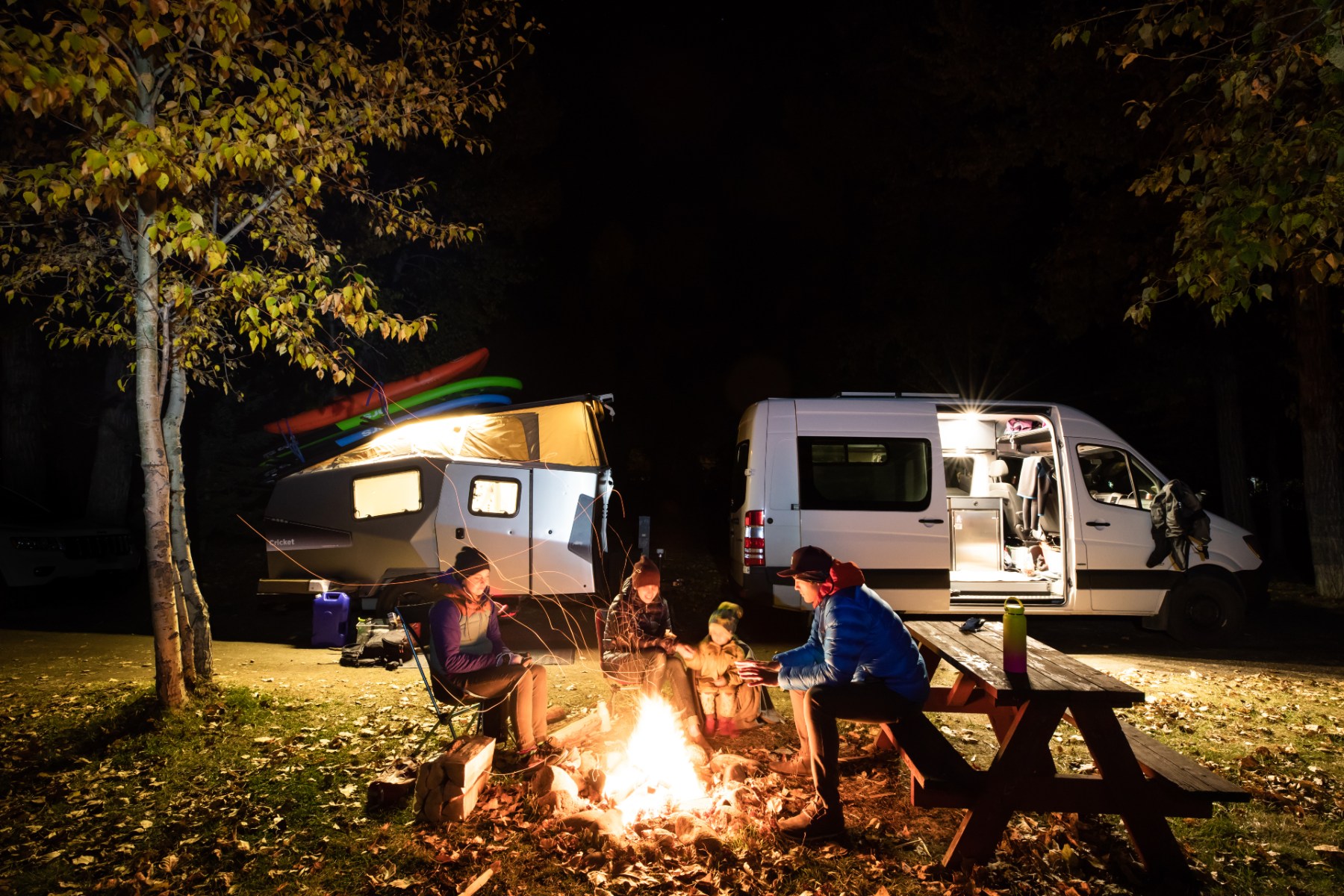 For the Boujee Boater: Glühwein
I first sipped Glühwein at an outdoor ice skating rink in Salzburg, Austria. Pronounced glue-wine, which doesn’t sound appetizing at all, the German translation is ‘glow wine,’ because of the glow you feel after you’ve been drinking it. While you may be more familiar with the term Mulled Wine, the foundational recipe involves a simple syrup, spices and warm wine, from there you can experiment with other flavors like nutmeg and cardamum or adding cranberries, raisins or other fruits.

Mulled wine is best served on a layover day, to give the flavors a couple of hours to simmer together but prepping the ingredients and making the simple syrup at home would speed up the process.

Zest the orange in wide strips, then juice and set aside. Combine the water and sugar and boil until the sugar has completely dissolved. Reduce the heat and add the cloves, cinnamon star anise, orange zest and juice, or whatever spices and fruits you’re using. Simmer about a minute until a fragrant syrup forms. Reduce the heat further—if you’re cooking over an open fire, switch to coals—and add the wine. You want the wine to steam but not simmer for at least 20 minutes before serving. Do not let the wine reach a boil or you will burn off the alcohol.

Top each mug with a shot of rum, amaretto, brandy or Grand Marnier before serving for an extra zing. For a big group with boxed wine, triple the recipe. 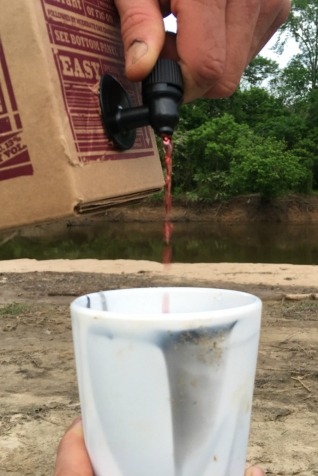 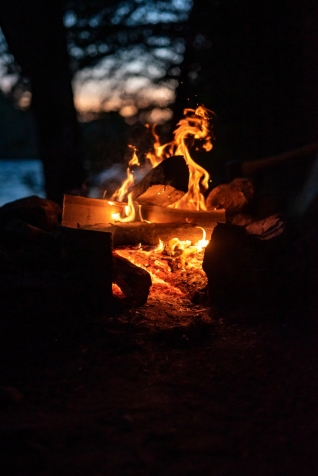 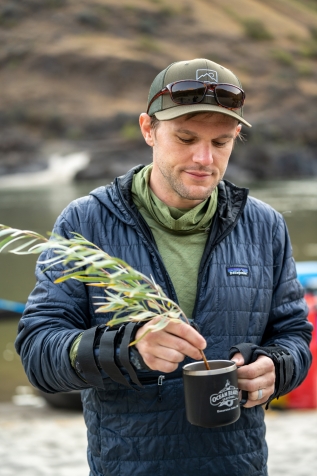 For the Self-Support Minimalist: Hot Toddy
Easy sippin’ with an essence of hot tea, the Hot Toddy is another classic by-the-fire treat. Plus, if too many cold nights under the stars have given you a sore throat, I’ve always sworn by the Hot Toddy’s medicinal qualities.

Combine honey, bourbon and lemon juice in a mug. Pour over hot water and stir to combine. Garnish with a cinnamon stick and lemon slice. 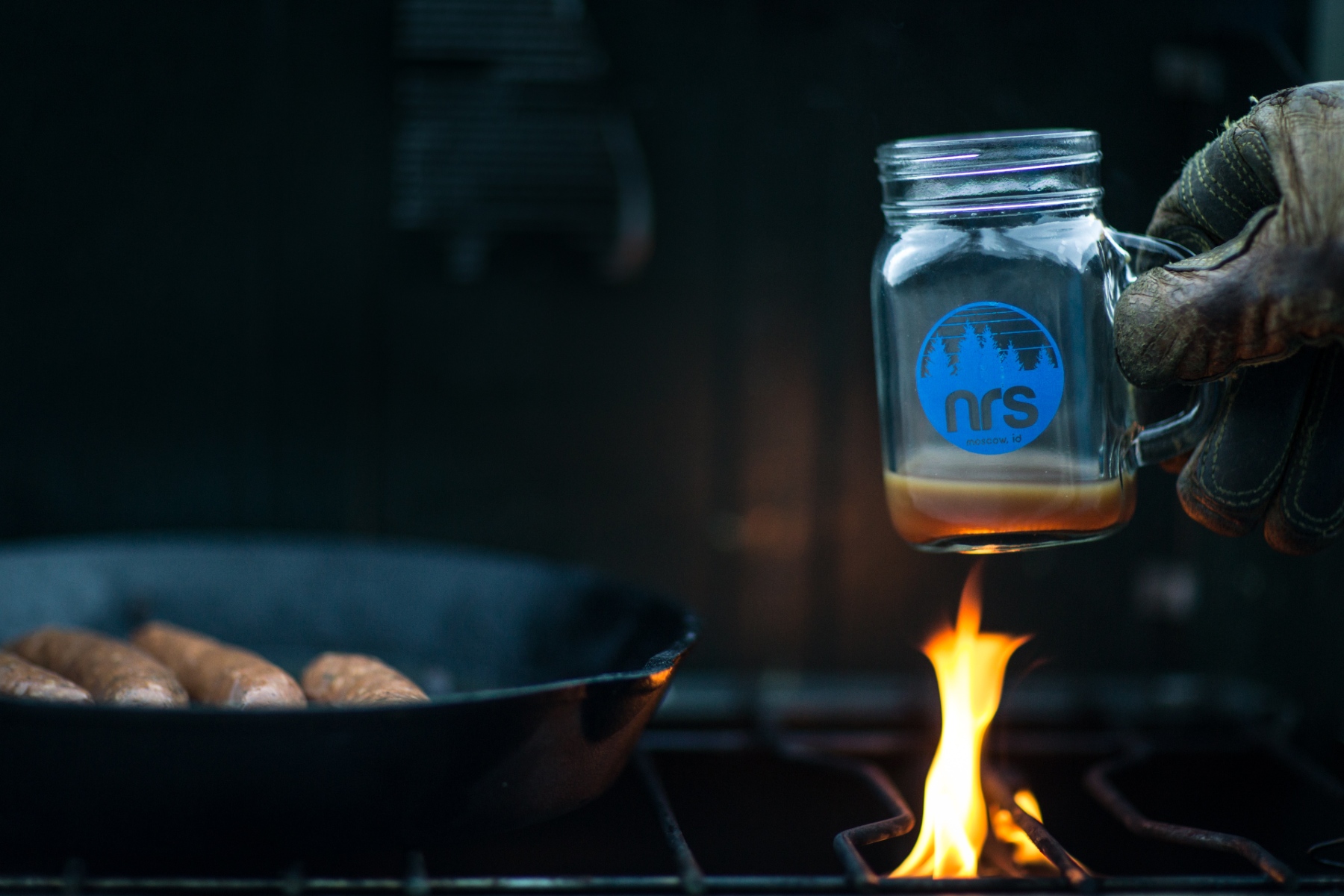 For the Crew that Packs the Kitchen Sink: Hot Buttered Rum
Maybe you don’t pack a kitchen sink, but Hot Buttered Rum does require a cooler. So, if freeze-dried meals are your jam, Hot Buttered Rum is not the drink to cheers after dinner. I recommend making the ‘butter’ in Hot Buttered Rum ahead of time to eliminate a few steps and cut down on your ingredient packing list. Also, I think it would be easier to keep this mix cold enough than trying to keep ice cream frozen.

Beat together butter, sugars, spices and salt until creamy and light. Add softened ice cream and blend until well combined. In a mug, pour rum over one tablespoon of the spiced butter mixture. Top with hot water and stir until ingredients are well incorporated. Garnish with a cinnamon stick or top with whip cream and dust with spices. The remaining butter can be stored in an airtight container in your cooler or fridge. 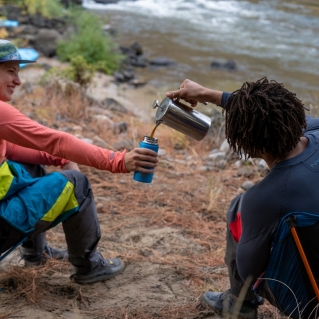 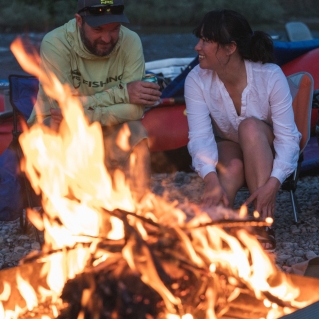 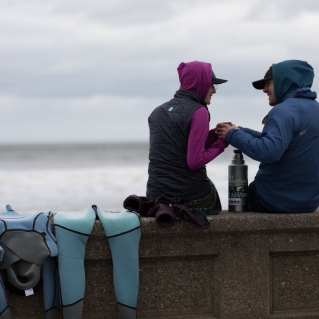