Chasing perfect water levels and seeking work on the river means that for many whitewater kayakers, ‘home river’ can be a fluid term. But no matter what country a kayaker calls home, the soundtrack is always the same: the rumble of whitewater. “I can constantly hear the faint roar of the rapids while I am falling asleep, cooking or just chilling out,” says British kayaker Beth Morgan.

She feels at home living beside the Sjoa River in south-central Norway and can look upstream to watch the river pour out of a small gorge into the crystal-clear pool in front of the Sjoa Kayak Camp, which she currently calls home. Downstream spray from the slalom rapids marks the midway point of the Åmot section.

Hoping to escape the regulated rivers and recent restrictions in the UK, Beth landed a job with Heidal Rafting last summer and has been ‘stuck’ there since. However, her first time paddling the Sjoa was in 2013 during the Sjoa River Festival. Beth came for the week-long festival and stayed for a month. Following the festival, she returned many times to kayak, and once, in 2019, she even coached a group of British kayakers on the Sjoa.

“It is so rewarding to show other people down a river that is special to you,” she says, referring to her coaching experience but also the media she captures photographing rafting trips. “I love taking photos of the rafts surfing and the screaming, happy faces on the boat. I also really like taking photos in Chocolate Canyon,” which is one of the most beautiful spots on the popular rafting section of the river. The raft companies call that section‘Sjoa Normal.’ Kayakers simply call it the ‘playrun’. 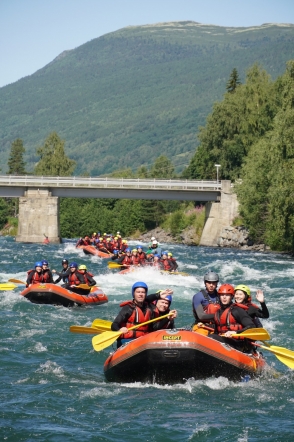 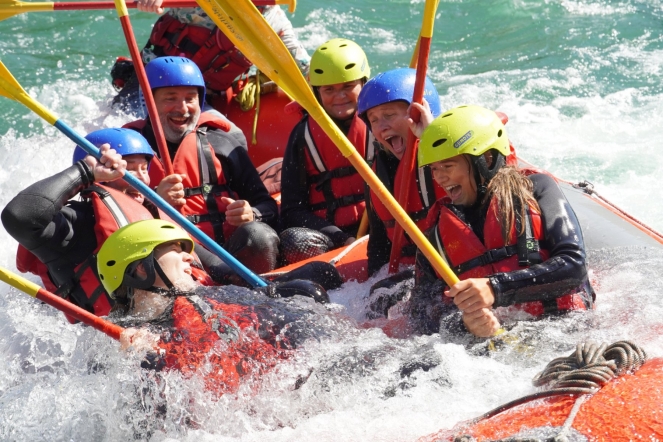 The Sjoa is a dynamic river, with boulder gardens, pool drops and steep-walled gorges all rimmed by rich pine forests and the green and grey hues of the rolling mountains in the distance. Glacial melt feeds into its headwaters at Gjende Lake in Norway’s Jotunheim National Park, giving the river its milky blue color as it flows eastward for almost 100 kilometers before joining the larger Gudbrandsdalslågen River just downstream of the Åmot section take out.

The ‘playrun,’ is located roughly 300 kilometers or a four-hour drive northwest of Oslo. Harsh winters of frigid temperatures nearly freeze the river each year, constantly changing the rapids. Isgangs (river avalanches) also shape the river as do high water flood events during spring thaws. The flow can vary from around 10 m3/s (in early spring) to a record of over 900 m3/s, which occurred during a flood in 2011. But the ‘playrun’ is only one of the many sections on the Sjoa River. The river is long and provides a variety of whitewater from class II to class V. 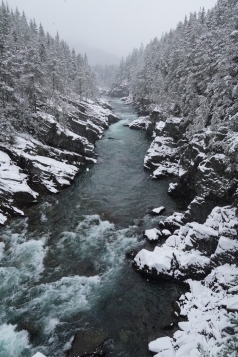 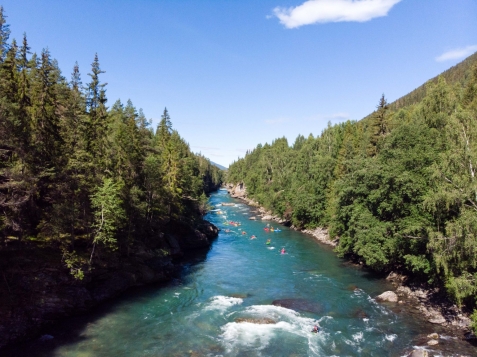 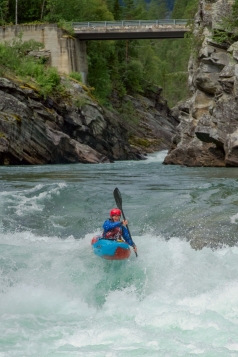 The Sjoa Valley draws in tons of tourists in the summer, who come to raft, canyon and river board on the Sjoa as well as hike, climb, bike and fish the headwaters in Jotunheimen National Park.

Calling the Sjoa Valley home means Beth hasn’t seen family for over a year, due more to travel restrictions than distance. Originally from Somerset in southwest England, she went to Leeds University and eventually landed in North Wales, which is now her most ‘home-like’ place in the UK.

Living in Norway she has had to adjust to dark and cold northern winters. “Last year we kayaked all the way through November, and then spent the rest of the winter watching the river freeze over bit by bit,” she says, admitting that it was not an easy season. “We had two-and-a-half months without sunshine reaching the valley. And it was -25 Celsius for six weeks straight. There are not a lot of people around. But it’s beautiful and learning to ski was a fun alternative to kayaking for a few months.” With a late spring they were back on the water in mid-May, and summer provided water, sun and people.

The Sjoa is a playground for tourist and locals alike. “A lot of people use the river for work or play, so I think many locals have a special relationship with the river. And in the summer, there are a lot of seasonal guides here who also appreciate the river.

Living next to the river means enjoying the long summer days, and the long summer paddling season. “When every other river around dries up, there is still fun to be had on the Sjoa.” High water provides waves to surf and kickflip. Low water offers eddies for slalom moves and stern squirts. “You can’t get bored on the Sjoa…and if you do, you are doing it wrong!” 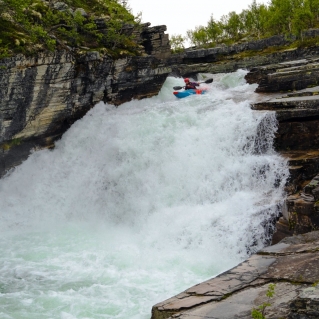 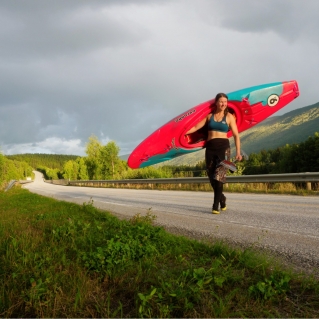