I Was a Grand Canyon Internet Date

As I lay awake at Lees Ferry, listening to the wind and eyeing the scorpion that had taken up watch three feet away, I wondered—not for the first time—if I was in over my head. Tomorrow, I would launch on a 16-day Grand Canyon trip with a group of strangers I met online, and I knew that once the current pulled our boats downstream, there would be no turning back.

I had always wanted to go on a trip down the Grand Canyon (what river runner hasn’t?), but it always seemed out of reach. I wanted my own adventure, but I was also experiencing an increasingly desperate need to connect with my father as early-onset dementia caused his memory to deteriorate. His trips down the Grand Canyon are some of the happiest memories of his life, and a trip of my own would offer us an important point of connection. 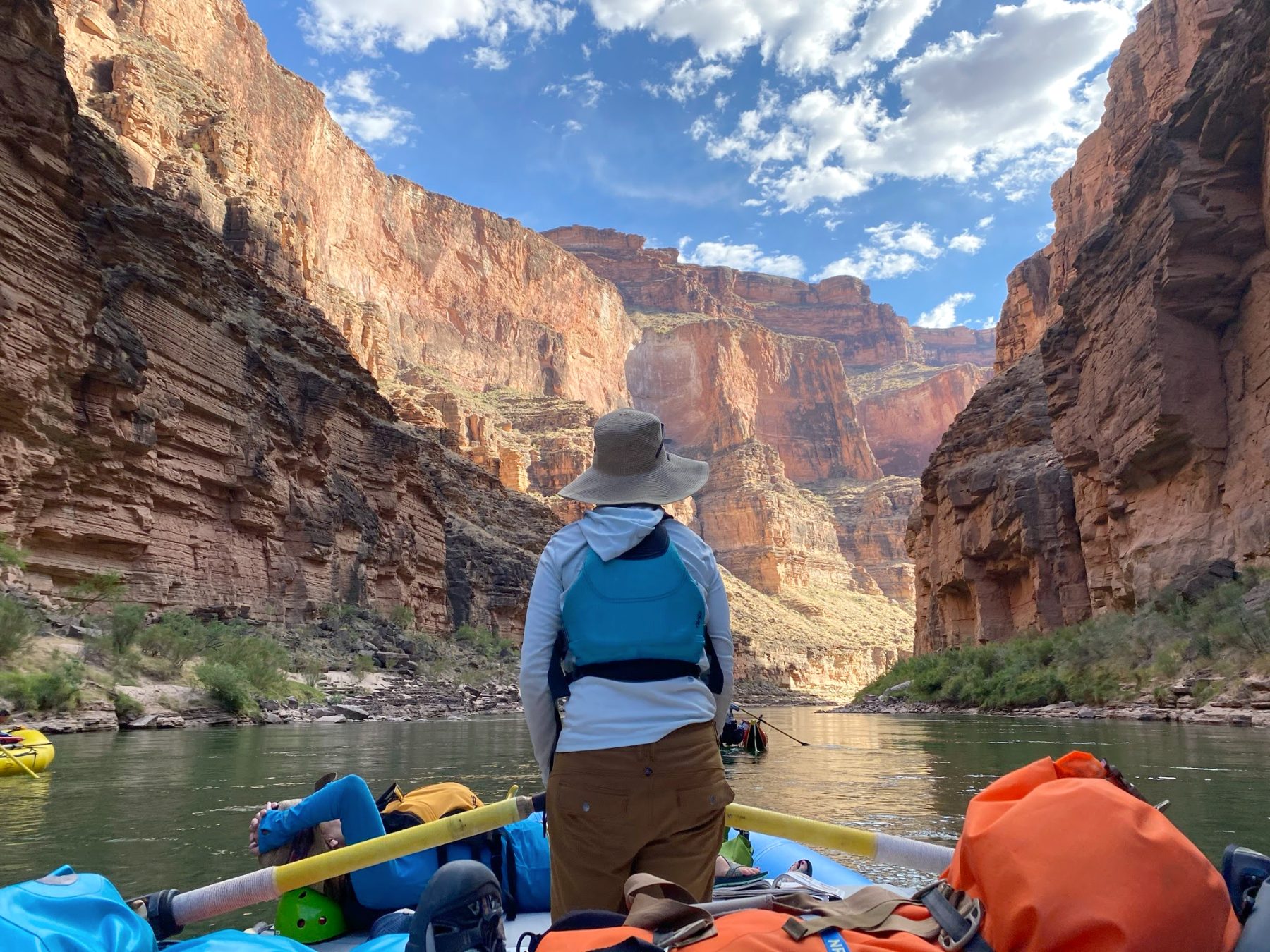 Last winter, my husband and I made a major move. I left my job as a teacher, we found ourselves living in a hotel, and I worked at a nearby grocery store. My life lacked direction and purpose, but I was untethered from the responsibilities of adult life in a way that might never come again. As the snow fell and I bagged groceries and a pandemic raged around us, I knew that there would never be a better time to try for a Grand Canyon trip.

On New Year’s Eve, I wrote two magic words on a piece of “wish paper,” a very thin piece of tissue that lifts into the air and evaporates into smoke and ash when you light it. But a wish isn’t reality, so I also joined a Facebook group called “Grand Canyon River Trip Participants Needed,” which is exactly what it sounds like.  Most of the posts fall into one of two categories: Either someone has gotten a permit but doesn’t have enough rowers, or someone posts something like, “I’ve been down the Big Ditch twelve times and I love doing dishes. Here’s a picture of me in a unicorn costume.” 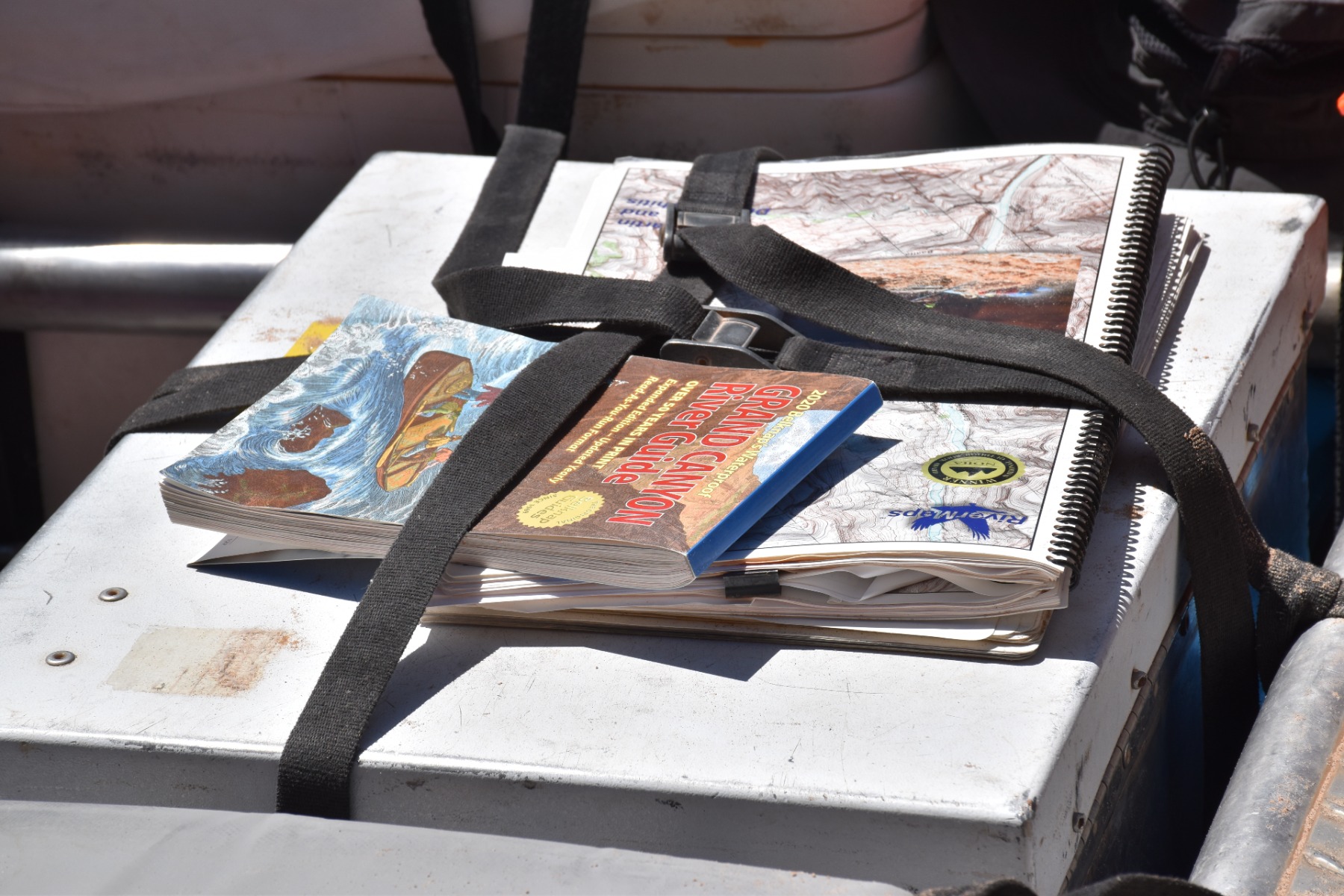 I wrote a very long post detailing my dad’s declining health and was clear about the fact that I could not row someone’s boat through the big rapids if they got scared. I made the requisite comment about dishes and groover duty. For luck, I put glitter on my face every day for a week and held my breath.

Something about my post must have touched people because the response was overwhelming. Almost immediately I had upwards of thirty comments on the post, mostly messages of support and, “If I get a cancellation, I’ll take you!” One woman said if I could be at Lees Ferry in a week, I was welcome to join. Then, a man from Spokane, Washington who had picked up a cancellation permit messaged me. “I’m intrigued by your story,” he said. “Let’s talk.” 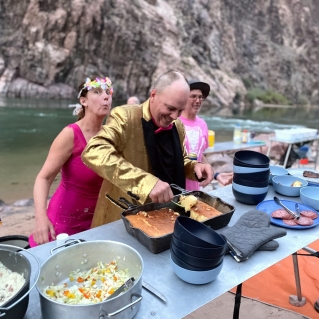 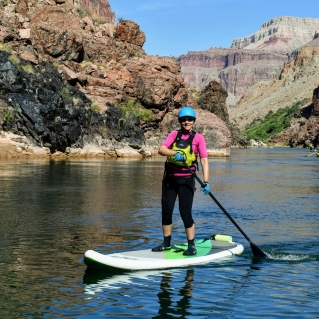 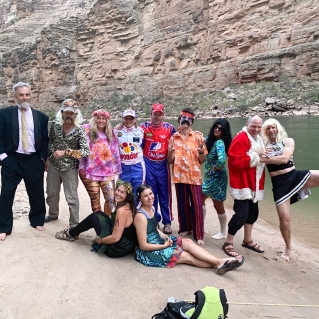 The two ways I could find myself having a terrible time on a Grand Canyon trip would be either being with a group who was flippant about safety or finding myself in a river-based version of Fear and Loathing in Las Vegas. During my long phone conversation with Craig, he put my mind at ease by telling me that they were a tight-knit crew of firefighters, paramedics and nurses. Half had been down the Grand Canyon before, and they’ve all been boating the rivers of the Northwest together for years. They weren’t big partiers. When I remarked that it’s a very bold move to invite a complete stranger on a Grand Canyon trip, he said, “It’s a little scary, but you won’t be our first ‘Internet date.’”

He talked to the other members of the party. I bit my nails. A week later, the message came: Welcome aboard. 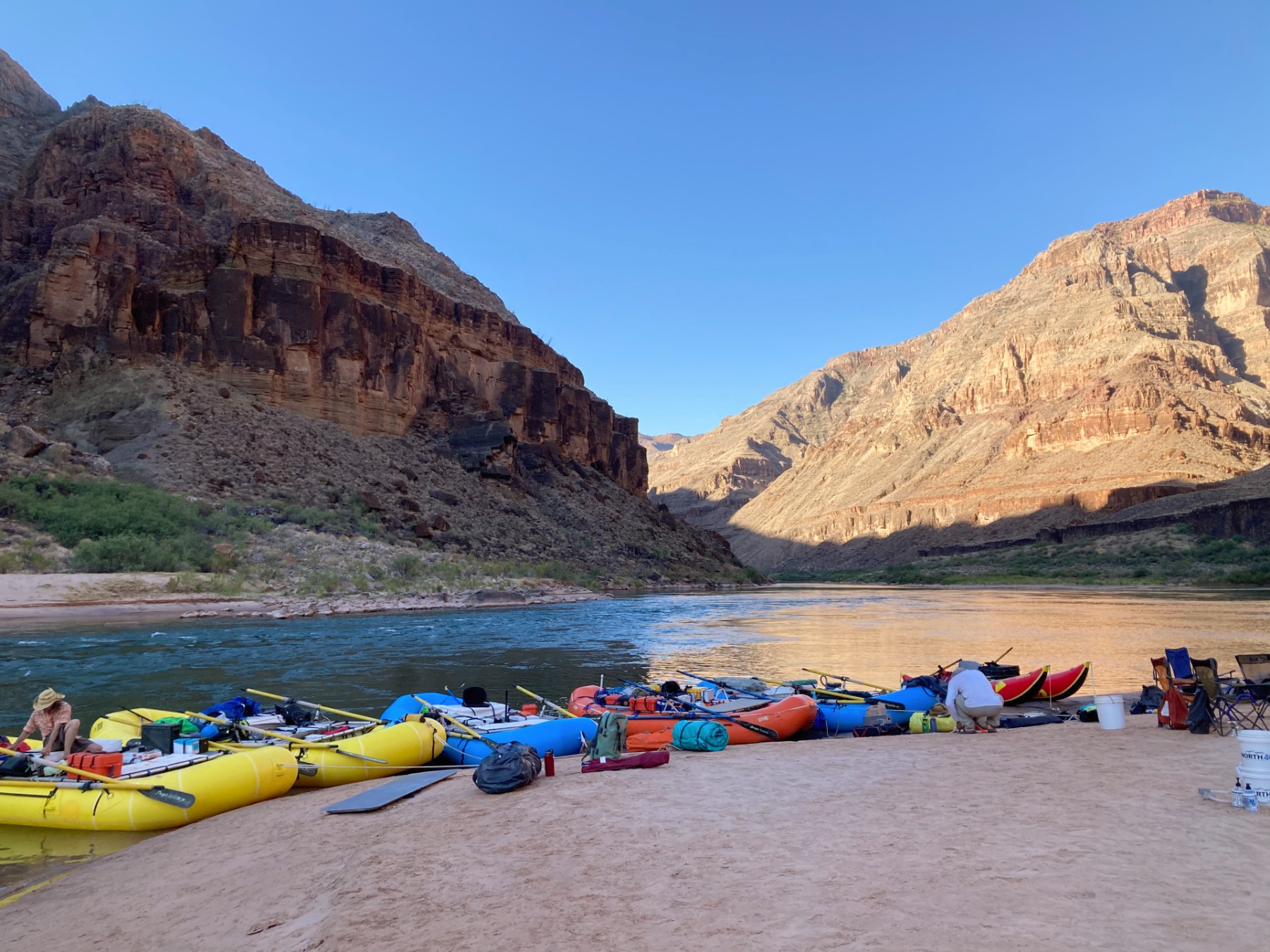 In many ways, all river trips are alike in these ways, united by the joys and challenges of making our way through some of the most magical places on Earth. There is a way in which being on a river allows people to turn into the best versions of themselves. When we are deep in a river canyon, we live the way people are meant to live: a combination of hard work and rest, days anchored to the passing of the sun, and most importantly, in community with a small band of other human beings. By the time we part ways, even three or five days later, it can feel as if we’d known each other all our lives.

Sixteen days in the Grand Canyon exponentially amplified this river trip bonding effect, and pretty much as soon as we pushed off at Lees my anxiety disappeared. Two days of hurricane-force winds right off the ramp solidified our relationships in the way that only literally rowing a boat with another person can. Despite our exhaustion and bleeding hands, conversations quickly turned personal. 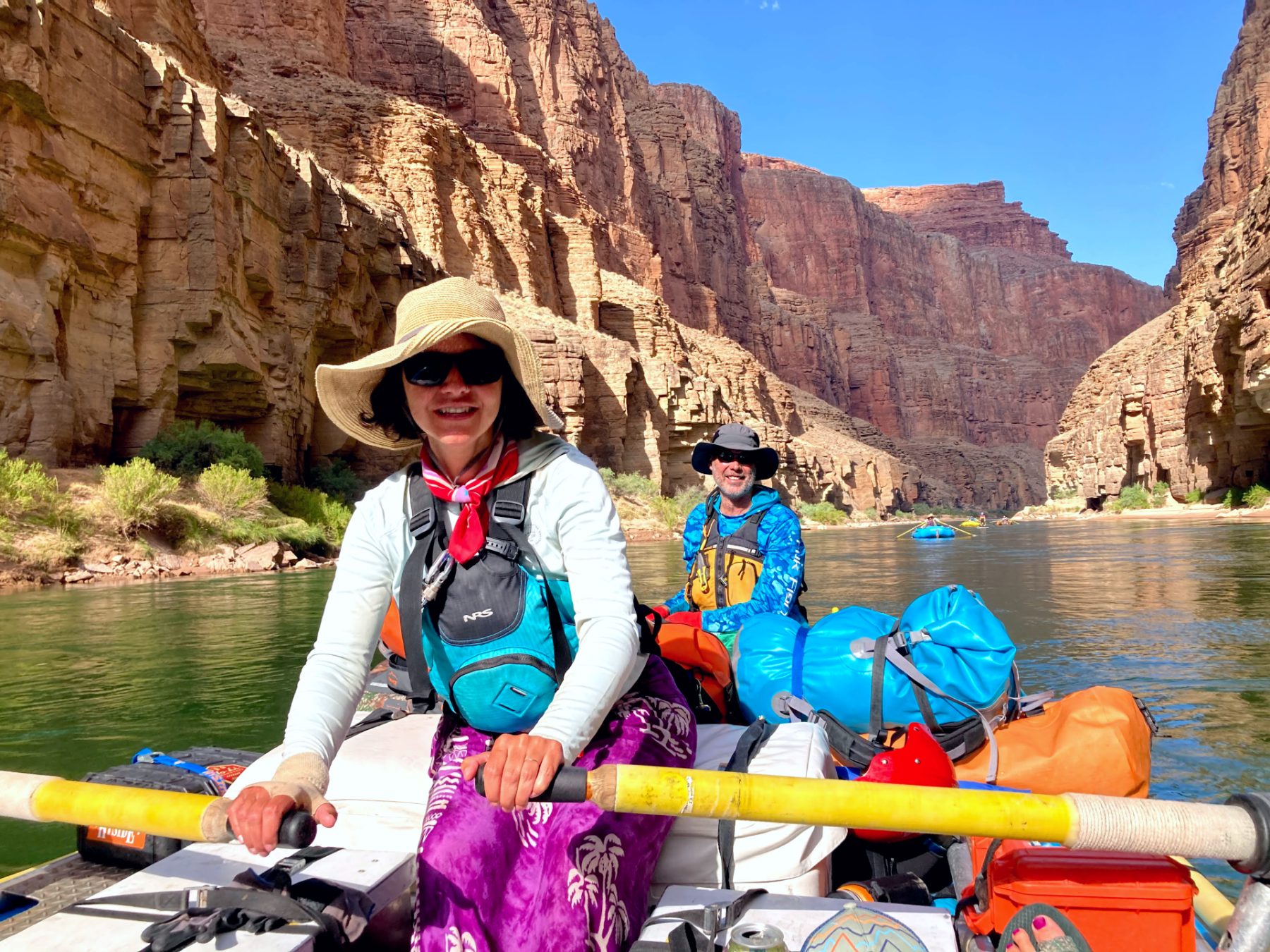 On our first night out, I spoke frankly about my dad’s dementia, and another member of the group shared his sadness over his father’s struggle with Parkinson’s. As the days went by, other stories of grief emerged. Several people on the trip worked in hospitals and talked about their year watching Covid patients die, the phones they held so people could say goodbye over Zoom. Someone else was recovering from a life-altering injury. There were a lot of tears and hugs in those early days. It seemed, in a way, that this was a group of people who needed to be in a place like this, a place big enough to hold us in our sadness.

But, as we traveled down-canyon, the weight began to lift. Canyon veterans and first-timers alike marveled as we cut deeper into the earth, as one wonder gave way to another. Our laughter got louder. We high-fived through big rapids, napped in the shade, and rejoiced when Craig allowed us to have ice in our cocktails. 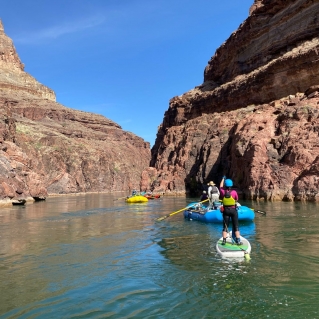 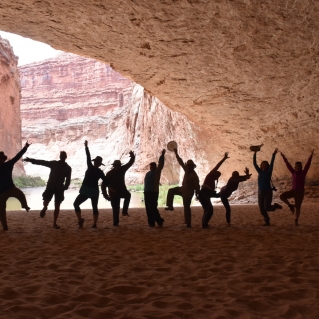 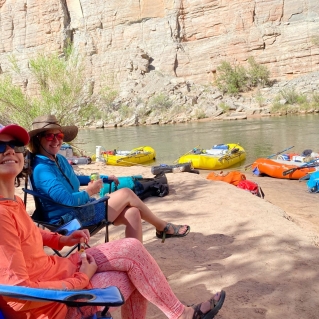 On the seventh day, we flipped a boat, and I took a very long, very cold swim. Shaken, and thinking of the much larger rapids downstream, I considered hiking out at Phantom Ranch. The group wasn’t having it, though. No way, they said. Bob, a very strong boater, told me I could ride with his wife Jenny and him through any rapid I wanted. He got us through, soaking wet and laughing, every time.

Like any online date, there was the chance that this could have gone terribly wrong. But it was definitely worth the risk. Taking a chance on a group of strangers, or even that one random friend-of-a-friend-of-a-friend can lead to lifelong friendships. If you’re lucky, it might also lead to a few more invitations on those highly coveted permitted stretches. 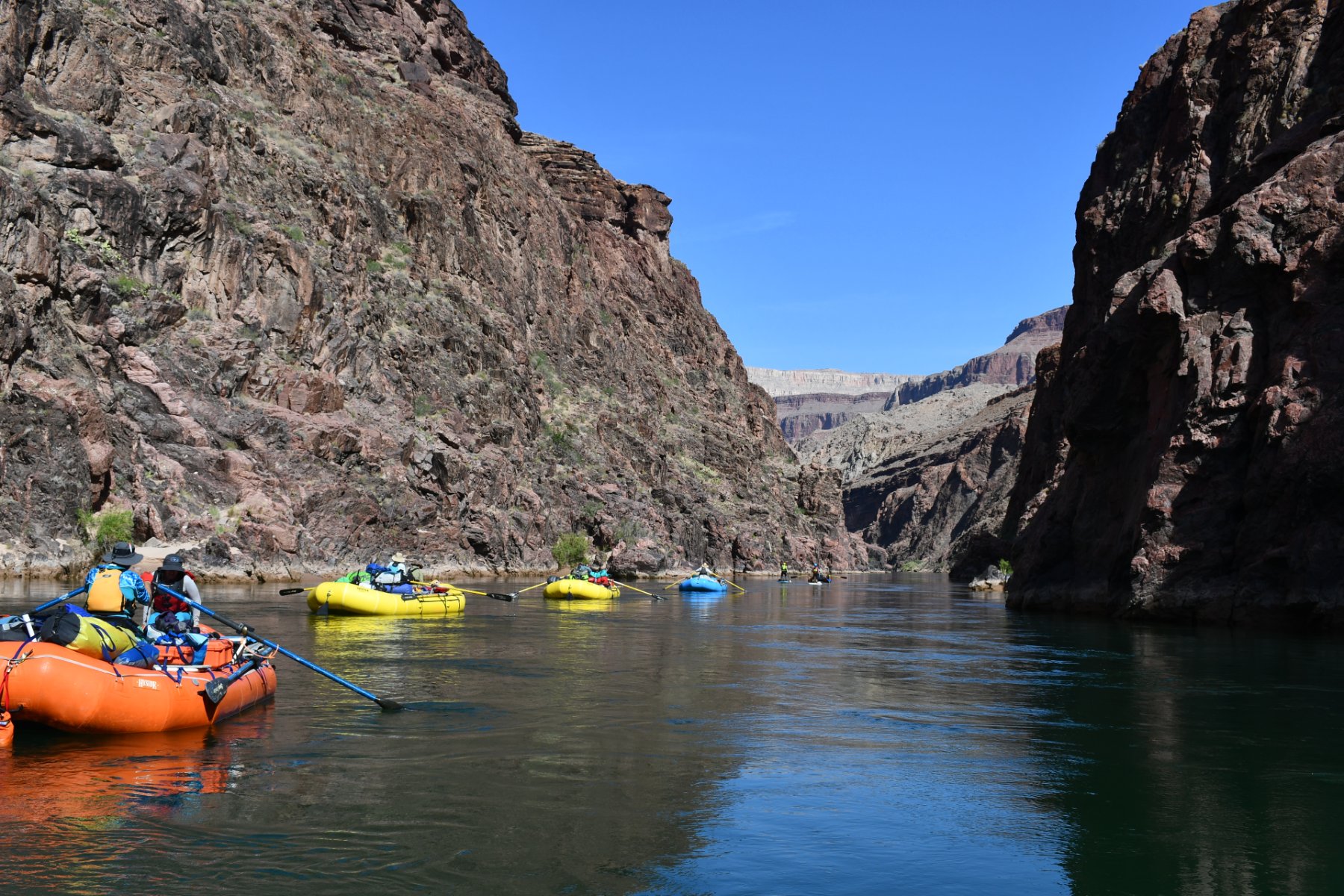 For those interested in expanding a circle of boating friends or taking a chance on strangers, one major place to connect with people is online. In addition to the group I joined, there are Facebook groups for pretty much every region of the country. Many areas have Meetups or paddling clubs.

Before joining up with a group or asking a new person to join a trip, do your due diligence. Have frank conversations around experience level and qualifications like wilderness medicine or swiftwater rescue. Do you have similar expectations around safety practices? What about alcohol and drugs? Establish clear expectations around finances, gear, and logistics. And, go with your gut. If it seems like it’s not a good fit, it probably isn’t. Having these conversations before you hit the put-in will go a long way toward making your trip a success. 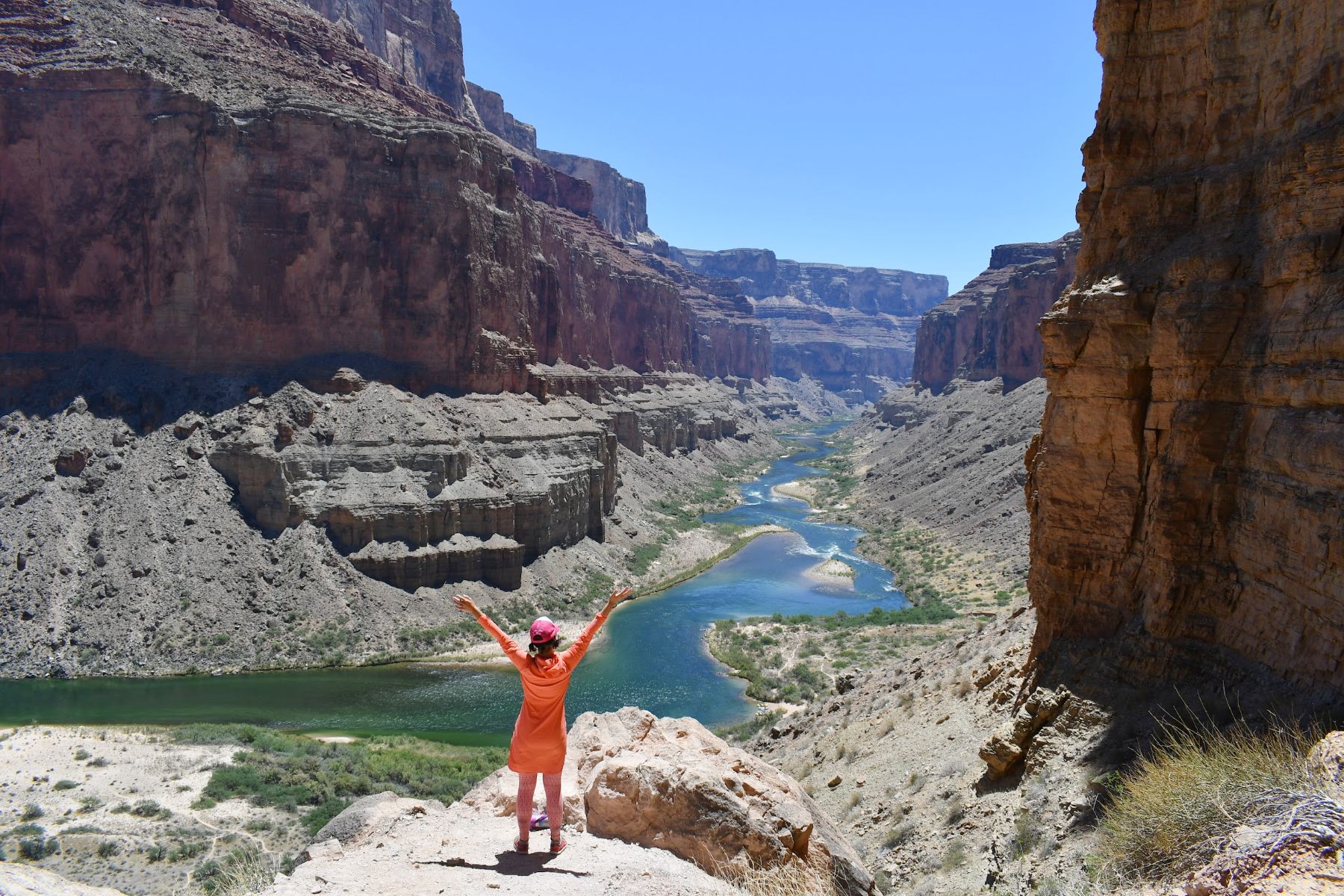 Four days before the end of our trip, we ran Lava Falls. Whether you’re high on the thrill of a clean run or picking up the pieces of overturned rafts, this day warrants a celebration—both for making it through the rapid and for marking the beginning of the end of your journey. No matter what happened during the twenty seconds upstream, it is customary to pull over below the rapid at so-called Tequila Beach, and, as the name implies, share a bottle of tequila specially reserved for that moment.

Despite a couple of near misses, our runs were clean. Adrenaline still coursing through our veins, we passed the bottle, laughing and hugging. Two weeks earlier, I hadn’t met a single one of these people. Now, there we were, toasting the river, each other, and the good fortune that had brought us all together.