Poking out from the shore of the Class IV Numbers section on the Arkansas River in Colorado was a sizeable strainer, and we were headed right for it.

“Go, go, go, go, go!” my friend Som shouted. He was technically in charge of our green nine-foot raft. I was supposed to be following his paddle commands, but we were having trust issues.

I back paddled when he forward paddled; I straightened the boat out when he tried to make moves across the river. Me, a cocky third-year raft guide, and he a photographer and avid private boater; we both thought we knew the section better than the other. 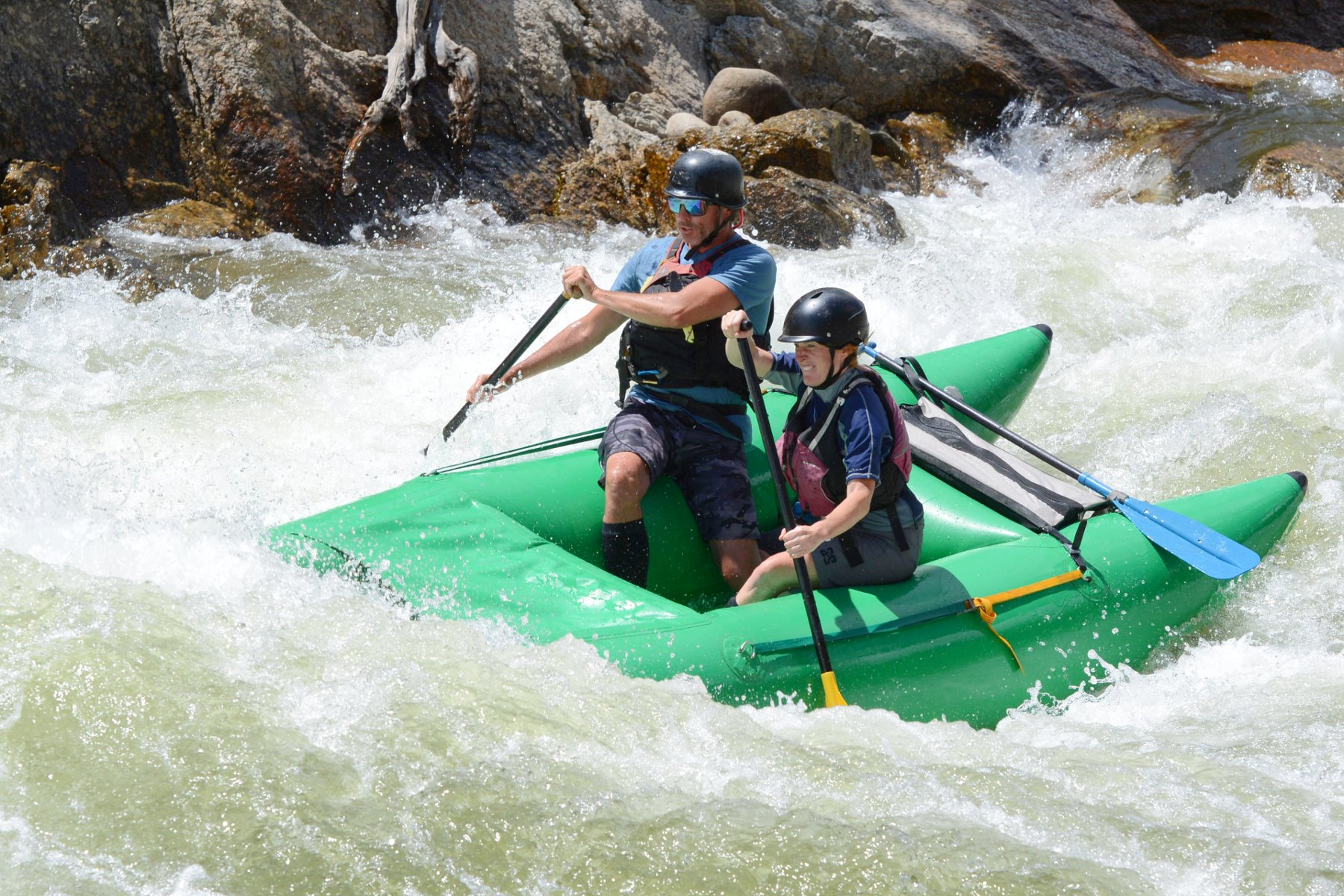 I dug my paddle into the water hard, our paddle strokes finally synchronized, narrowly dodging the sharp, woody end of the ponderosa pine that had fallen a quarter of the way across the river. 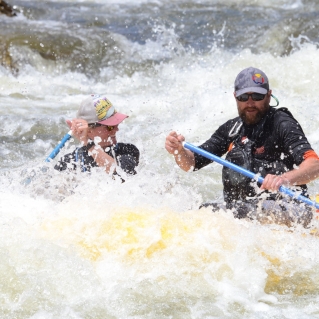 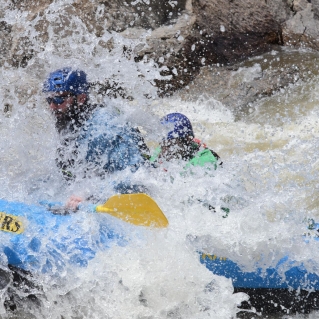 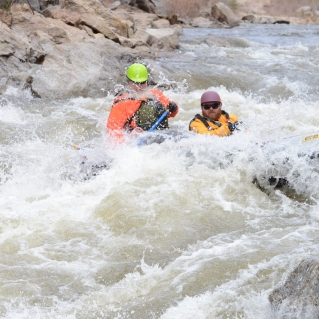 Som has been my friend since my very first day in the Arkansas River Valley. I had shown up for rookie training in mid-May, the snow still falling, and ended up in an adjacent campsite to a bunch of first-year photographers who shot for all the companies in the valley. Soon we all became close friends.

We made fires every night and sat around chatting, mostly talking about boating and the misery of rookie training. We were made to swim and flip our boats every day, the water just above freezing, the sky gray and snowy.

Most of us lived in tents or our vehicles. On several occasions, I woke up buried beneath ripstop nylon and a foot of snow that had fallen overnight. One of the senior guides had also warned us of mountain lions in the area (probably just to mess with us), so I barely slept. 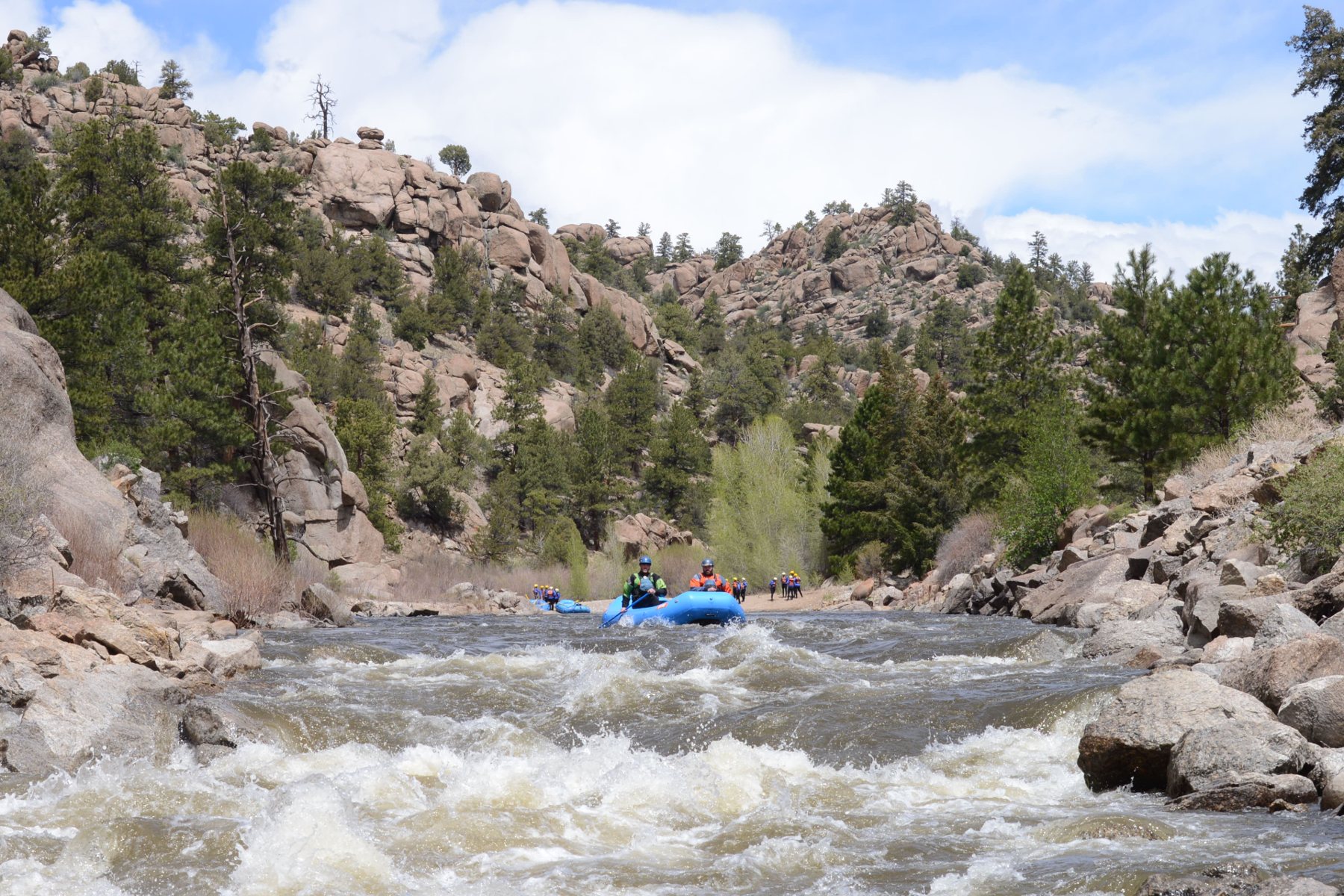 The photographers had to learn how to boat as well, as their role was to raft down early in the morning, the sun barely up and the river to themselves. They set up their cameras and laptops under a sunshade on the side of the river to shoot pictures of all the numerous companies that rafted through. Looking at the photos after trips, one could always tell if Som had been shooting that day. He was the best photographer in his company.

I was trained in paddle guiding 13-foot rafts with up to seven customers in royal blue boats. But when we boated on days off or after trips with other guides or our photographer friends, we preferred an Arkansas River Valley favorite: the mini.

Mini boats range in size from eight to ten-and-a-half feet, usually with no more than two thwarts. The most fun way to navigate a section of river in one, in my opinion, is the R2. 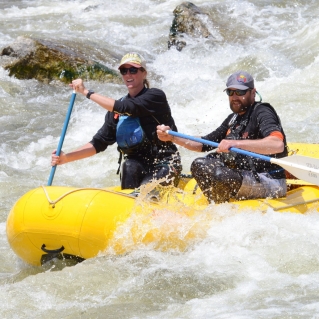 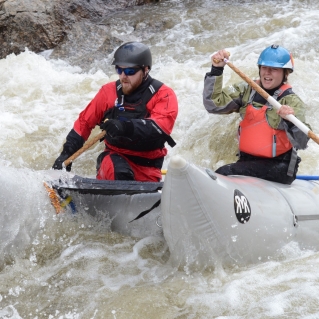 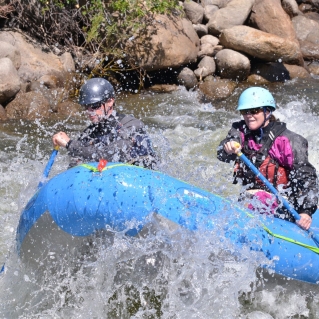 R2ing is somewhat of an art. It takes a lot of trust in your paddle partner. There are various ways to go about the proverbial R2. If both passengers have similar styles of boating and profound trust in the other, you can navigate whitewater without uttering a single word, your paddles perfectly in sync, slicing through holes and waves with ease.

Alternatively, one of the passengers can be the guide, calling out paddle strokes for the other. In the case of Som and myself, we had decided he would guide us that day to avoid control issues. It hadn’t worked.

After Numbers, we maneuvered the raft through the technical, rocky Class III Fractions section, both of us seething. We took out at the parabolic bridge in downtown Buena Vista and silently carried the tiny boat to Som’s blue Tacoma. 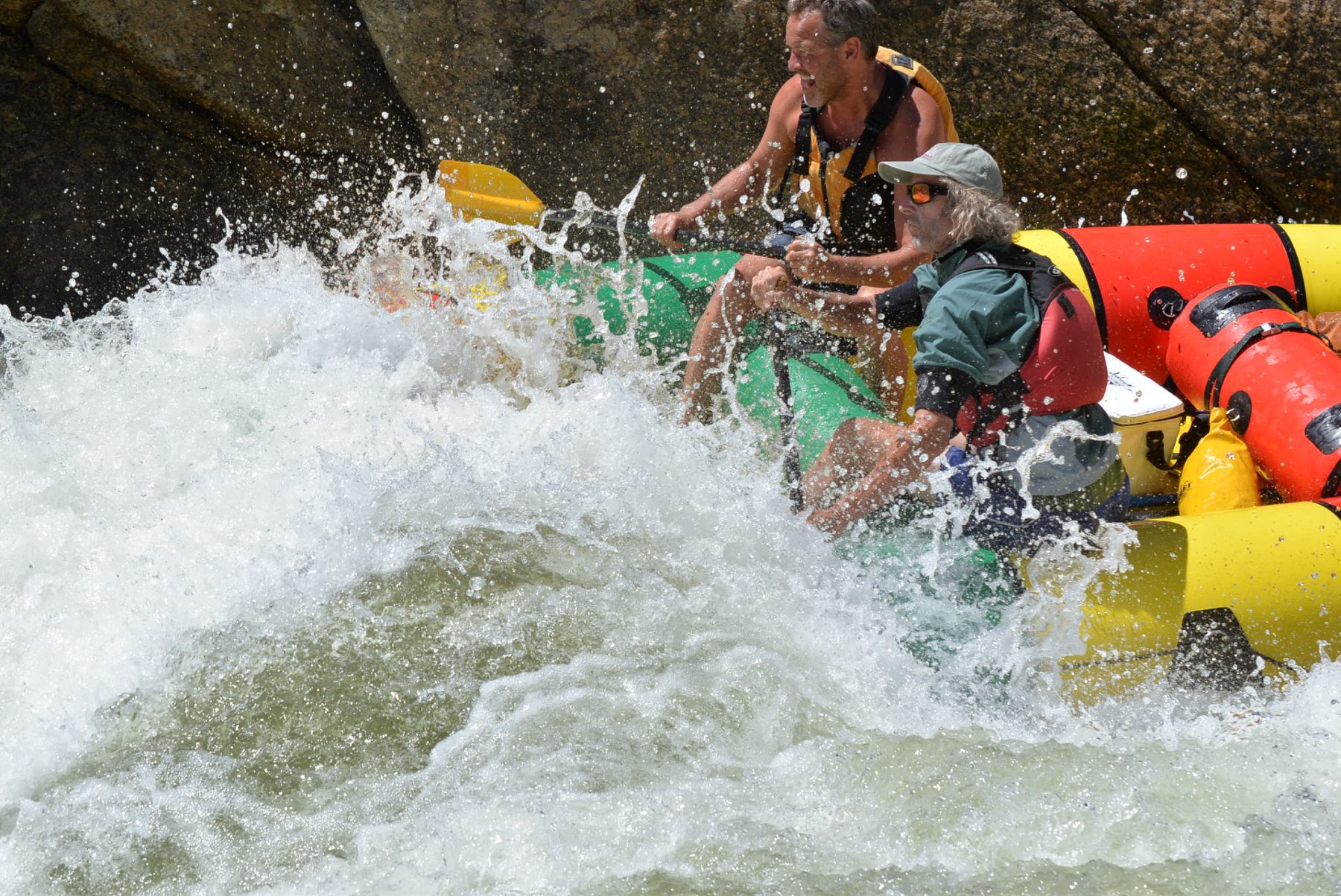 We rode quietly for a few minutes, the road winding north as we drove parallel to the river, huge 14ers dominating the view.  Soon we started to debrief our run. Som insisted that the move on notorious Number 5 was to set up late. I said that is never a good idea. It wasn’t long until we were chuckling at ourselves, deciding we probably shouldn’t be R2 partners on Numbers.

A couple of weeks later, we were back on the river in an R3 formation, our friend Joe and I in the front, Som guiding in the back. He wanted practice on the Class III Browns Canyon, and after some convincing, I said I would go along as a paddler.

He was hoping to learn the lines better, to enhance his rafting skills, as he was expected to row down in the morning with all the camera equipment. Whereas the company I guided for boated in pods of up to nine boats, he would be alone. We’d had a big snow year, meaning the water was especially high. There were a couple of kayakers and canoeists who shot for their company too, but Som had chosen to raft. 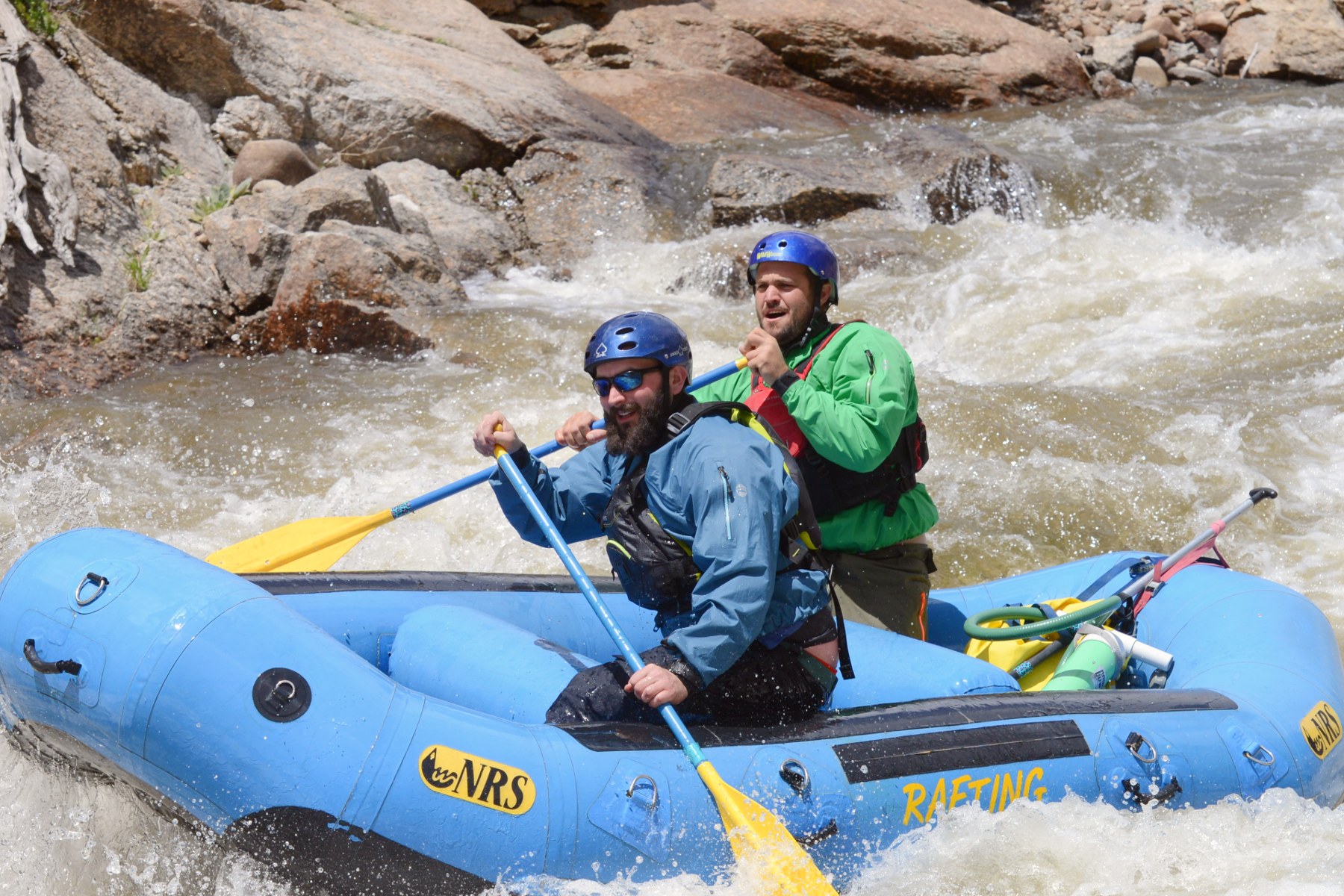 We carried that same nine-foot green raft down a long staircase to the put-in. As we wandered through Class II water, we chatted and eddied out frequently to enjoy the views.

We were running Browns at 3,600 CFS. The river usually runs below 2,000; it’s even runnable down to 400. Som insisted he wanted to guide everything except for Big Drop, a huge hole that morphs into a boat-eater at high water but is entirely avoidable. I said I would take Big Drop.

Som, Joe and I cruised through the rapids leading up to Big Drop. We rode up and over 15-foot standing waves in Zoom Flume, paddling hard to maintain momentum through Pinnacle hole, which threw Som to the front of the raft. He deftly took us through Pinball, which is normally a fun, technical obstacle course but becomes a series of boat-flipping holes at high water. 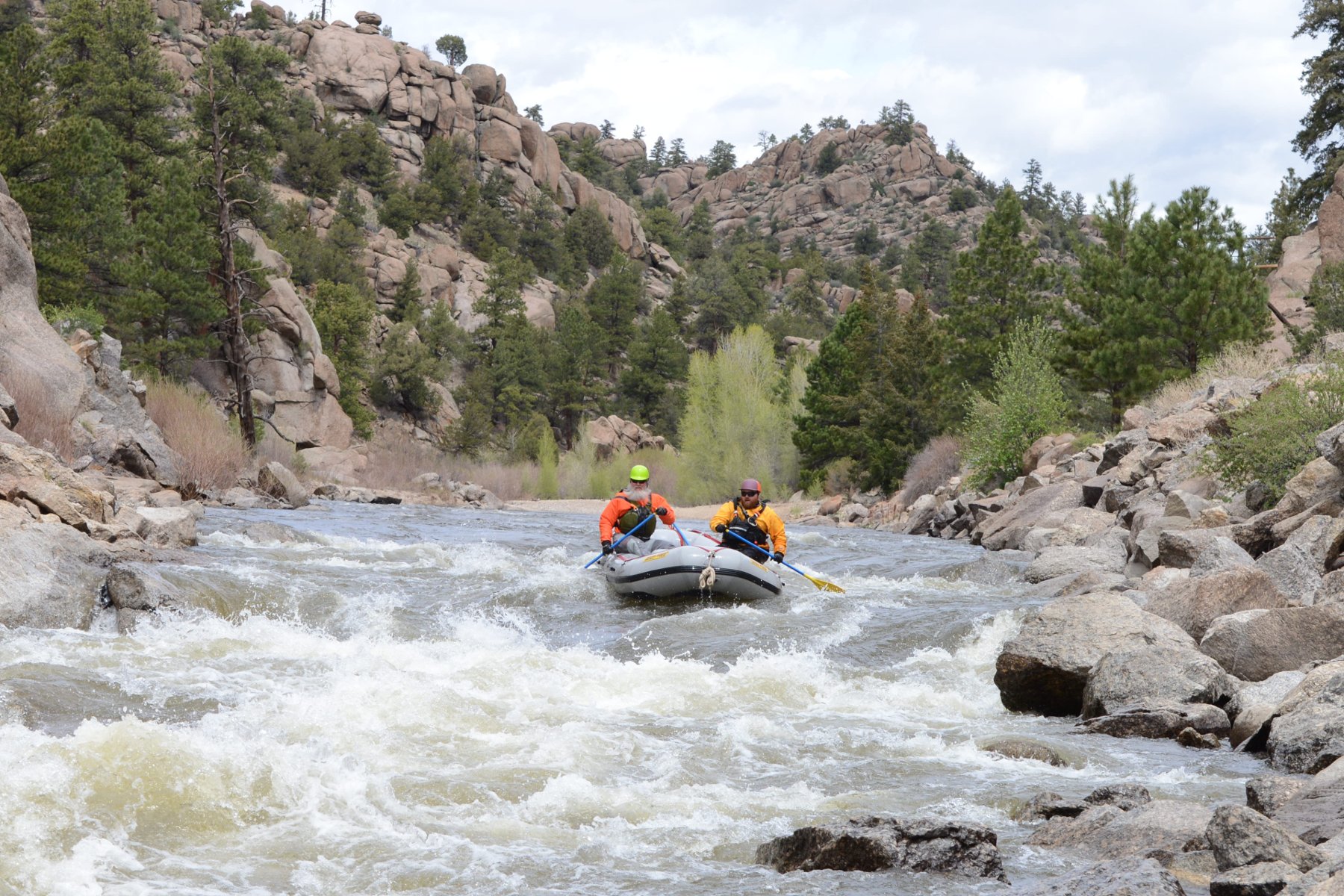 Finally, we floated toward Big Drop. Som and I switched places. As I was especially overconfident that year, I decided that we would gut it. We were going to run the meaty hole of Big Drop.

I called an all-forward as we raced toward the hole. As we slid into the drop, I knew I’d made a terrible mistake. It was bigger than I’d ever seen. It dwarfed our tiny nine-foot raft, which now seemed more like a bath toy than a boat.

The raft went completely vertical, and then everything went dark.

I was underneath the boat. I tried not to panic. Part of me was accepting of my fate, and I knew the river was showing me who was really in control here. 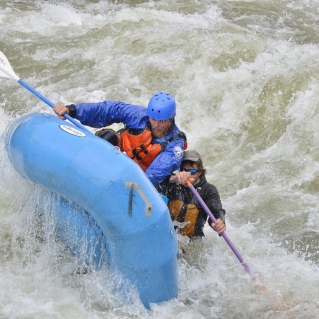 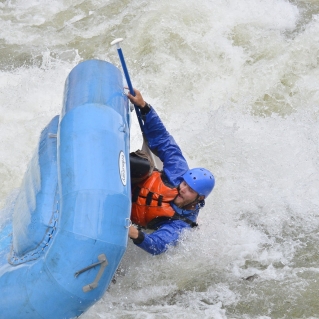 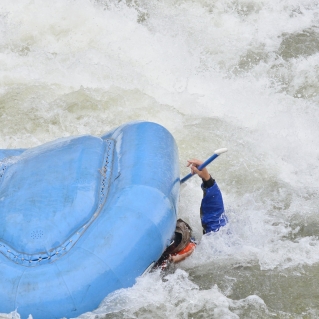 I came up gasping for air as the river turned left. Here all the water pushes against a wall straight into a sieve. I grabbed the chicken line, and Som pulled me in, his face pale and eyes wide. He immediately jumped to the stern and started calling paddle commands. Joe, who’d taken a swim as well, looked calm and collected as he drove his paddle into the gray water.

We pulled into an eddy, Som’s voice shaking. It had been understandably startling to come out the other side of the hole and realize you were the only one in the boat.

I didn’t say a word as we carried on downstream. I felt bad that I’d guided with such hubris, sending one friend for a swim and scaring the heck out of the other.

Once again, we were driving north on Highway 285 silently. Joe was in high spirits; not much seemed to scare him. Som was shaken. 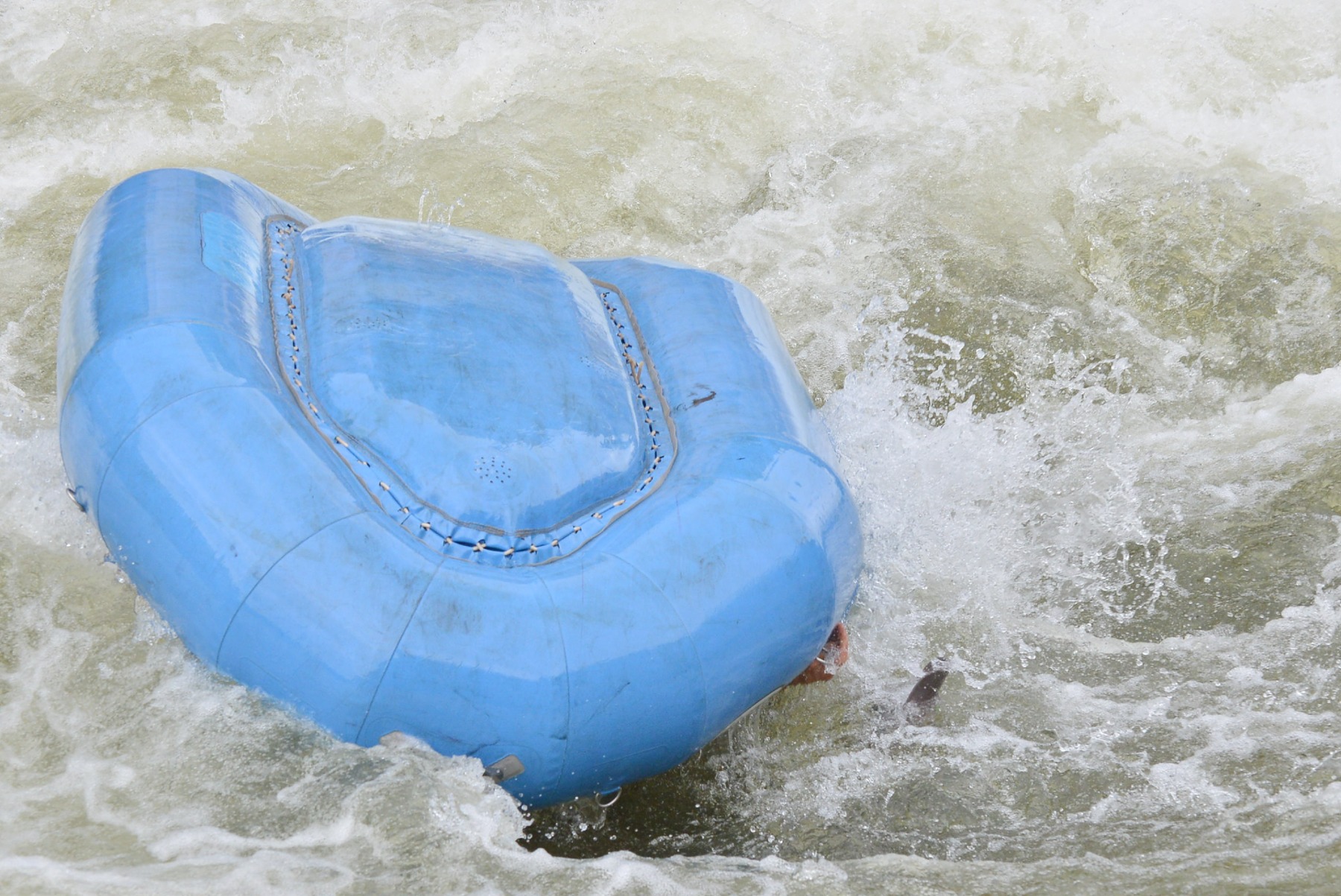 We told the story to the rest of our friends around the campfire that night, and slowly Som seemed to be a little less angry with me. By the time our kebabs had finished cooking in the fire, we were laughing.

July passed without any time for private boating. I waved at Som every time I passed him on shore shooting photos and cooked dinner with him and the rest of the rookies every night.

I think it was due to Som seeing me guide Numbers and Browns Canyon a bit more conservatively, dodging the big holes and being more intentional with my paddle instructions, that he decided he could trust me again. The river had humbled me.

When the high water receded in August, we found ourselves back on Numbers, R2ing the mini green boat despite our earlier agreement that we should avoid such a thing. 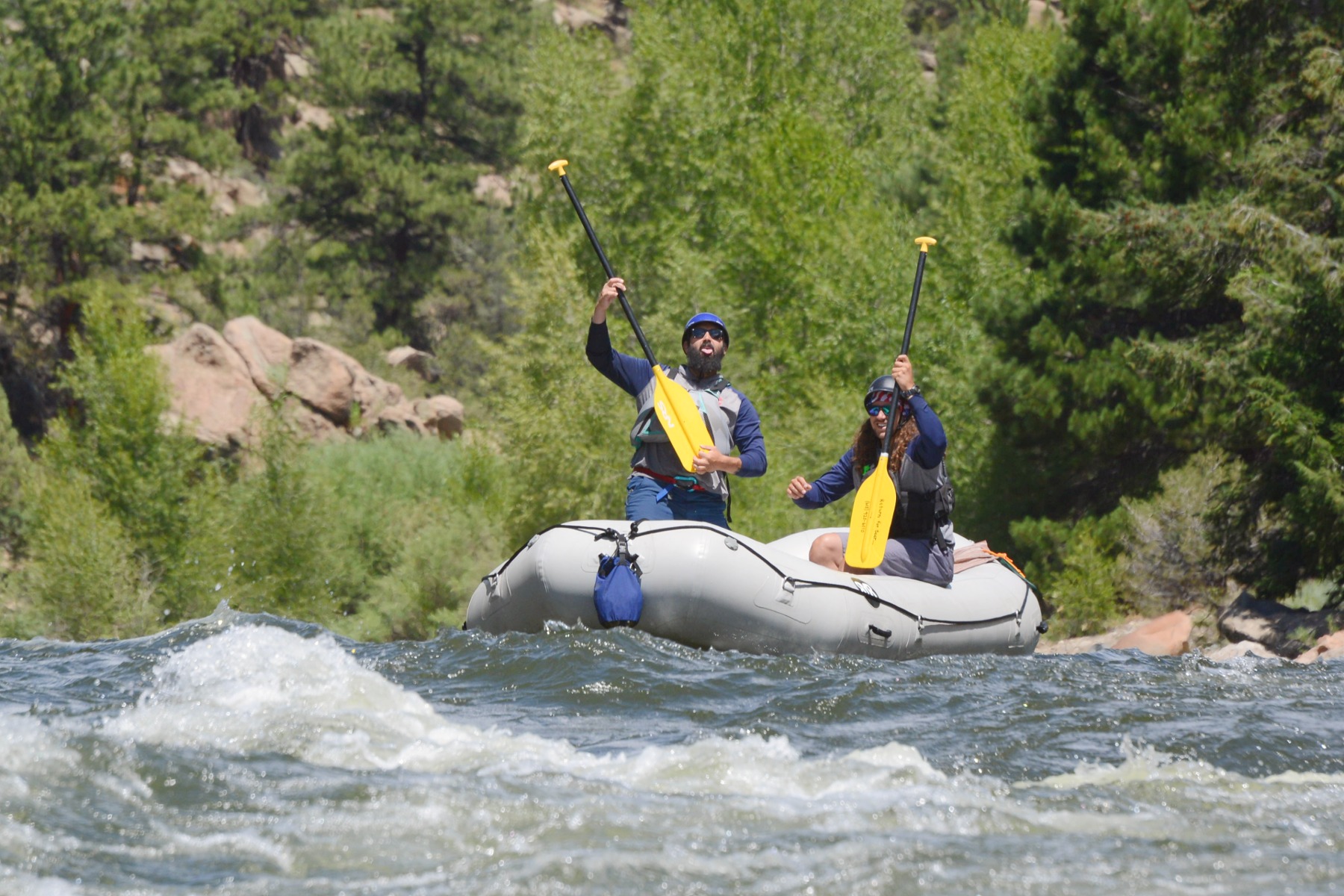 The trust issues were gone from both of us. We paddled together, neither of us guiding since at this point I knew his paddling skills were just as strong as mine.

We took out in town again, whooping and high-fiving after a flawless run through Numbers and Fractions. We’d dodged rocks gracefully, paddled up and over waves and holes nimbly, wordlessly.

When it comes to rafting, R2ing takes the most amount of trust in your partner. It just took Som and I some trial and error, a little rebuilding, and some practice to get there. Our friendship is all the better for it.

And by trial-and-error I mean almost losing your boat on a strainer and getting worked in a massive hole.

Editor’s Note: The photos do not depict the narrative, but are rather an assortment of Arkansas Valley guides paddling mini boats in their free time.