Naming Your Boat: A Rafter’s Rite of Passage

Approaching Marten’s rapid (III) on the Mckenzie River, at about 20 yards out, I felt composed and seemed to have my raft under control, though the water was hastening. Since receiving my minty new, alpine blue, NRS Otter raft six months earlier, I had been punching out some classic PNW class IVs. Compared to those steep and speedy drops, Marten’s seemed like a cakewalk.

Since the raft was so new, I hadn’t committed to a name (or gender) yet. In the interim, I called my raft Jane Doe, and we made an inseparable pair. Like the Lone Ranger and Silver, Atreyu and Falkor, or Wonder Woman and Serge, Jane Doe was my trustee steed. My rubber mustang.

We’d tackled Hood River and the Middle White in the gorge that separates Oregon and Washington. We trampled upper sections of the South and Middle Fork Smith River in Northern Cali and of course, backyard throwdown runs like the Lower Deschutes River. We were two peas in a pod and growing more connected and attached with every blade drop.

Back at Marten’s, a gaggle of local kayakers led me into the rapid’s entrance. We weaved through the rocky middle line. Since I had leveled up to Jane Doe, some of my slow roll, sloppy-joe habits acquired with my former beater raft (a thirty-year-young soggy Momentum) weren’t cutting it. Jane Doe’s taut and sculpted wrap combined with a symmetrically rockered bow and stern responded beautifully to spicy hydraulics. Every line with Jane Doe felt like a sporty ride on a wild horse. 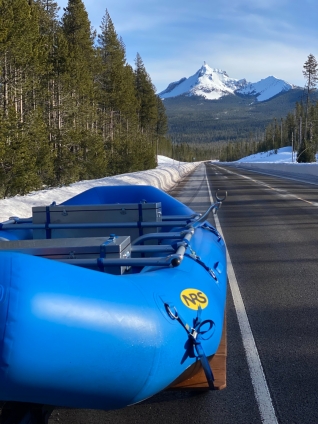 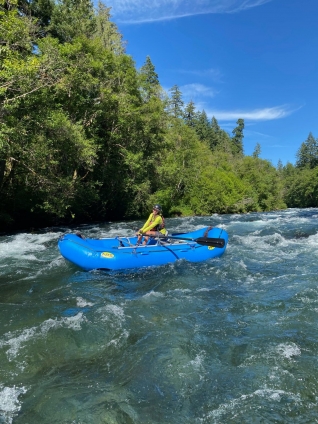 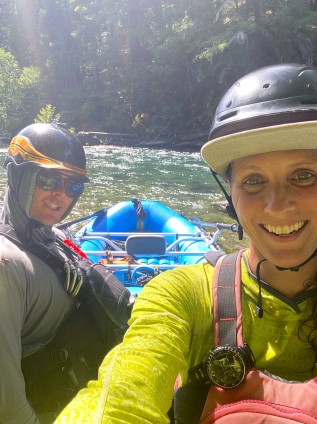 Entering the first of two raft-eating holes at the terminus of Marten’s, the whitewash was sticky. Levels hadn’t reached flood waters but a juicy 4,000 CFS of recirculating spring runoff grabbed Jane Doe’s front right tube and spun us 90 degrees, perpendicular to the current. This set us up to enter the second hole sideways. And like a ballerina stretching to her tiptoes and elegantly reaching for the sky, Jane Doe casually stood up straight, rail to rail, with perfect posture.

As my raft reared up, the words Houston, we have a problem pinballed between my ears. Cresting a critical negative angle, I was bucked out of the captain’s seat somersaulting sideways over my right shoulder and into the drink, upriver. Seemingly exhausted from the parlor trick, Jane Doe laid down with a smack, ass up, on top of me.

After what seemed like a million underwater river years (approximate real-time calculation equaled 20 seconds), I busted through the surface in a muted daze. I barely realized the washout was an icy 38 degrees. Only an arm’s length from my raft, I grabbed the bow line and swam Jane Doe to shore. I emerged on land like a wobbly colt taking its first steps.

In many ways, this initiation was a delightful—much anticipated—surprise. I was relieved that an IRL flip scenario had finally presented itself and I had risen (or sunk) to the occasion. Marten’s rapid was my first combat flip—ever—and a galactic whitewater coming-of-age moment.

Though grateful for the transformation the flip ushered, in retrospect, I wondered why I hadn’t taken the rapid more seriously. Why hadn’t I committed to a proper tee-up with blades anchored in the trough of each hole to keep Jane Doe parallel to the current, bow downstream and poised to pierce each hole? After all, I’d stalled out at the top of Screamer rapid (II+), just upstream of Marten’s. Maybe the biggest white cap on that section. If that rapid was sticky, I should have anticipated more stick in Marten’s. Ah well… hindsight and all that.

Many whitewater veterans have shared with me that flipping is a rite of passage. Albeit intimidating to contemplate, flipping transports you to the next level as a boater. I believe the saying goes, “There are rafters who have flipped and there are rafters who haven’t flipped—yet.” I was stoked to have arrived safely on the other side of the parable.

My first pass at righting a flipped raft by myself, in a controlled environment at rowing school, hadn’t gone well. Besides the fact that a simulated setup where one jumps on a raft tube to create a manufactured flip is nowhere near as real as an actual flip, these scenarios are more about practicing getting back on the boat and getting it upright. Though important skills to have, nothing can really prepare you for an unplanned flip or what it feels like to have a raft orbiting your body 180 degrees until it is riding you down the river.

Foreshadowing of the feared, yet necessary, baptism of a flip had haunted me since before my rowing school fail, and now I felt reborn and redeemed having the trial under my belt. I had stared down the beast and survived to tell the tale. And honestly, it wasn’t nearly as bad as I thought it would be.

After witnessing and hearing legendary stories of yard sale flips, closing the coffin capsizes, endos, barrel rolls and close-call dump trucks, all things considered, I had a friendly flip.

The anecdotes that most impressed me were the romanticized reports of dry flips. Exalted accounts of heroic oars and paddle captains who were able to crawl the perimeter of their boat in such a manner that they ended up on the raft’s underbelly rather than in the water during a flip. The ability to anticipate the acrobatics of the raft and then conform to those movements with matched maneuvers, all within a split second, is just plain standing-ovation worthy. The crème de la créme, though, venerable beyond words, are those who have accomplished this feat with 18-foot, heavy-as-sin gear boats in the Grand Canyon. Hats off to those lauded souls. 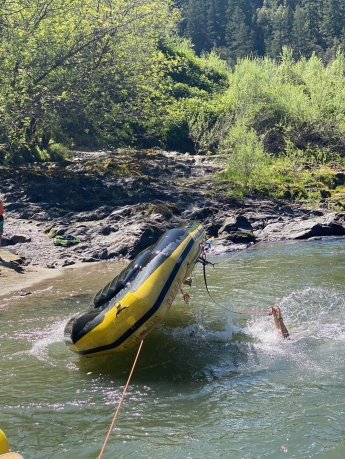 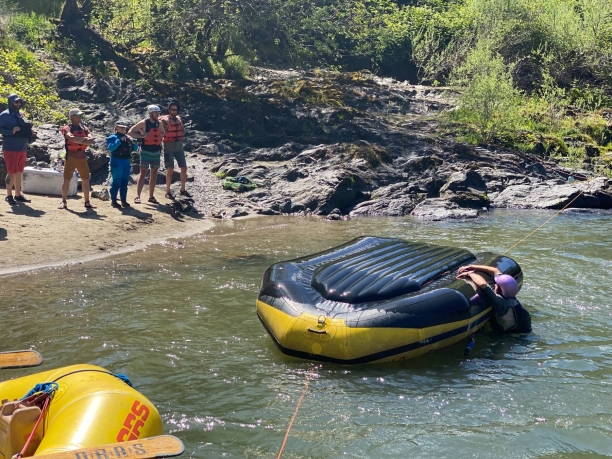 I was also stoked for the flip because now, according to whitewater lore, I had been officially granted permission by the whitewater Goddesses to name my raft.

When acquiring a new raft, superstitious boaters will tell you not to name your craft until after you’ve christened it with a flip. Admittedly, it makes sense. The carnal knowledge an owner gains of their boat from a flip is infinite, and therein lies the inspiration for and earned right to bestow a name.

Although I’d grown to love the provisional, stop-gap title Jane Doe, there was another epithet fighting for a breath. A moniker my raft was choosing and trying to communicate to me. Something about the color blue, and that my raft was a being of its own, with its own will and personality, and I needed to respect that. There was a third element of honor and gratification. I had saved up for so long, pined away for years, quietly dreaming of a raft all my own. And now that dream was embodied, how might I show the value I held for my pride and joy through a name?

Ultimately the phrase diamonds are a girl’s best friend really stuck with me. And a play on the somewhat antiquated idea that romance, commitment, and devotion is shown in relationships through the exchange of precious gems, like diamonds. I named my raft [drum roll] Sapphire Stallion because it’s my most valued possession and it’s a symbol of my empowerment and sovereignty to myself. Essentially, Sapphire Stallion is the engagement ring I bought myself. And in a way, we are kind of married to each other by way of the river. 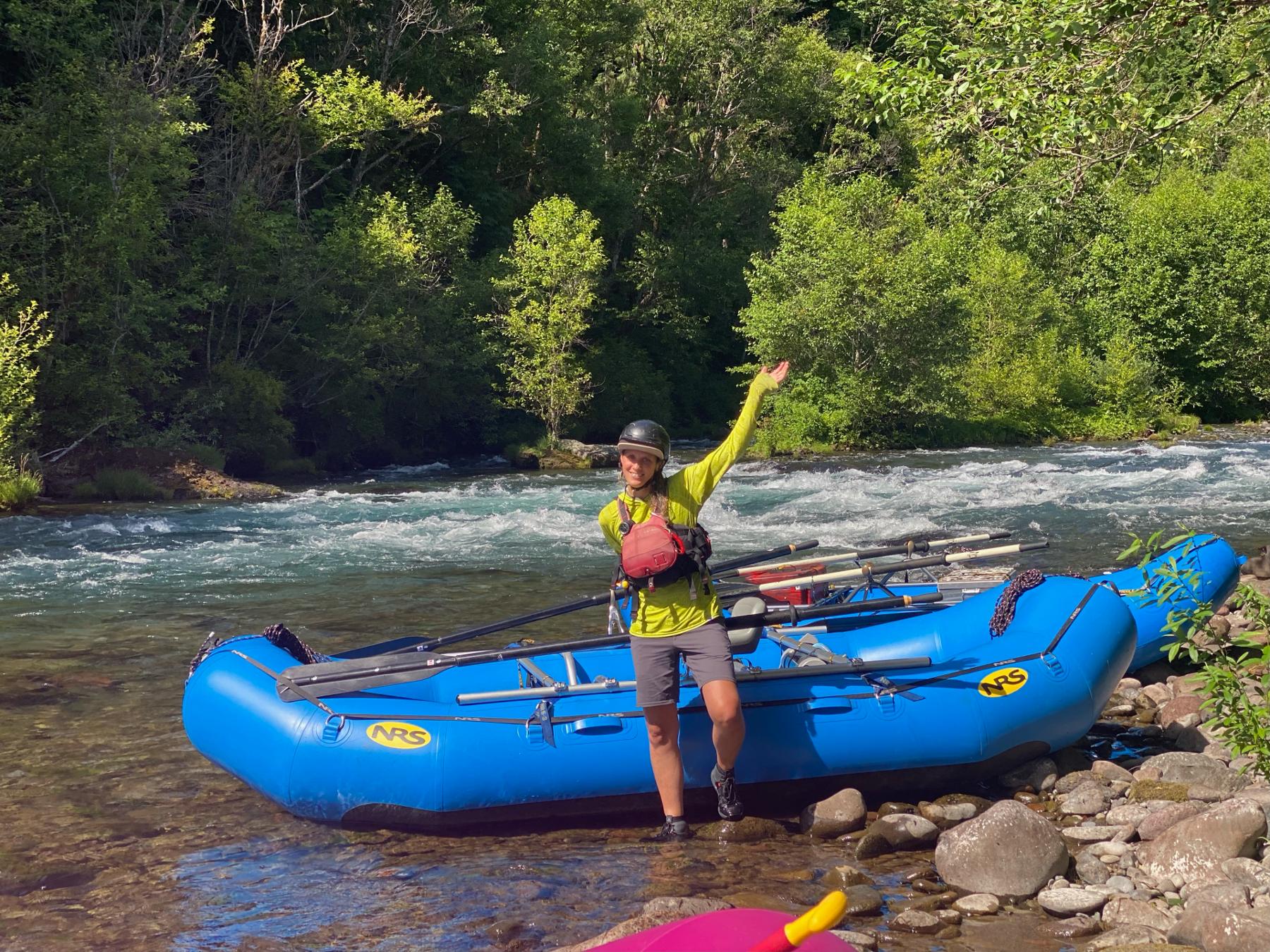 Speaking of love, the most humorous part of my flip narrative was that I had arranged to meet up with a Bumble date at the takeout. Before the flip occurred, I was 15 minutes away and right on track for our afternoon rendezvous, a riverside picnic. The flip set me back about 10 minutes. Luckily, he was late, too, something about long lines at the supermarket while purchasing said riverside picnic.

Drenched and loading my trailer, my date arrived and observed the chaos. Your run of the mill awkward yet endearing Bumble picnic ensued at which I could barely contain my excitement and adrenaline from the flip. My sensory system was on fire and there was no way he could understand. I realized how difficult it can be to bridge the gap between my blood lust for boating and the normalcy of the outside world.

If you aren’t a boater, how can I explain to you what my raft means to me? How I have slept on it after harrowing late day wrap rescues. How I have fought hard to stay upright with it—and, now, failed. The sacrifices I made—ate beans and rice and penny pitched—to buy it. How I maintain an overpriced duplex rental in Bend just for the garage space to store it. How Sapphire Stallion is the most precious gem in my nonexistent quiver of jewelry. And how I wouldn’t have it any other way. 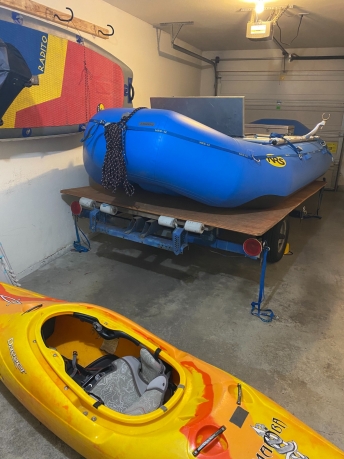 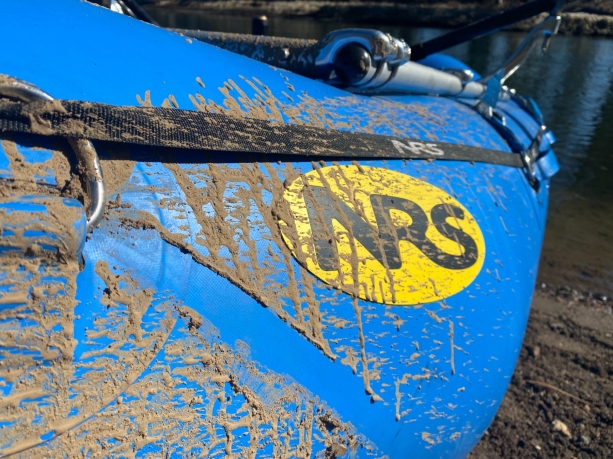 In any event, Bumble dates and raft naming superstition aside, during subsequent flip drills (post-Marten’s rapid) I’ve nailed it. If at first you don’t succeed, try, try again. During a recent swiftwater training flip drill, I swam under the raft and cozied up to the upside-down thwart like a koala bear until the flip was complete. This tactic simulated weight or gear in the flipped boat. One small step for man, one giant leap for Krystal.

I will always remember my first flip. Because, what good is the character arc of a superheroine’s champion racehorse without an origin as a shaky baby colt.