Musings on Loss, Pain and Why We Paddle

I was careful with my footsteps on wet roots and rocks as J.T. and I hiked cautiously up the trail along the White Salmon River. It had been raining, as is often in the Pacific Northwest. Years spent paddling this river and others around Washington during college flooded my memories. I hadn’t paddled with J.T. for over a year, but after being his boating partner for five or six years and having run this stretch together many times, it felt easy, comfortable, and nostalgic to put on for a lap just the two of us. Although the Pacific Northwest was no longer home, it felt like it as I put back on the White Salmon. 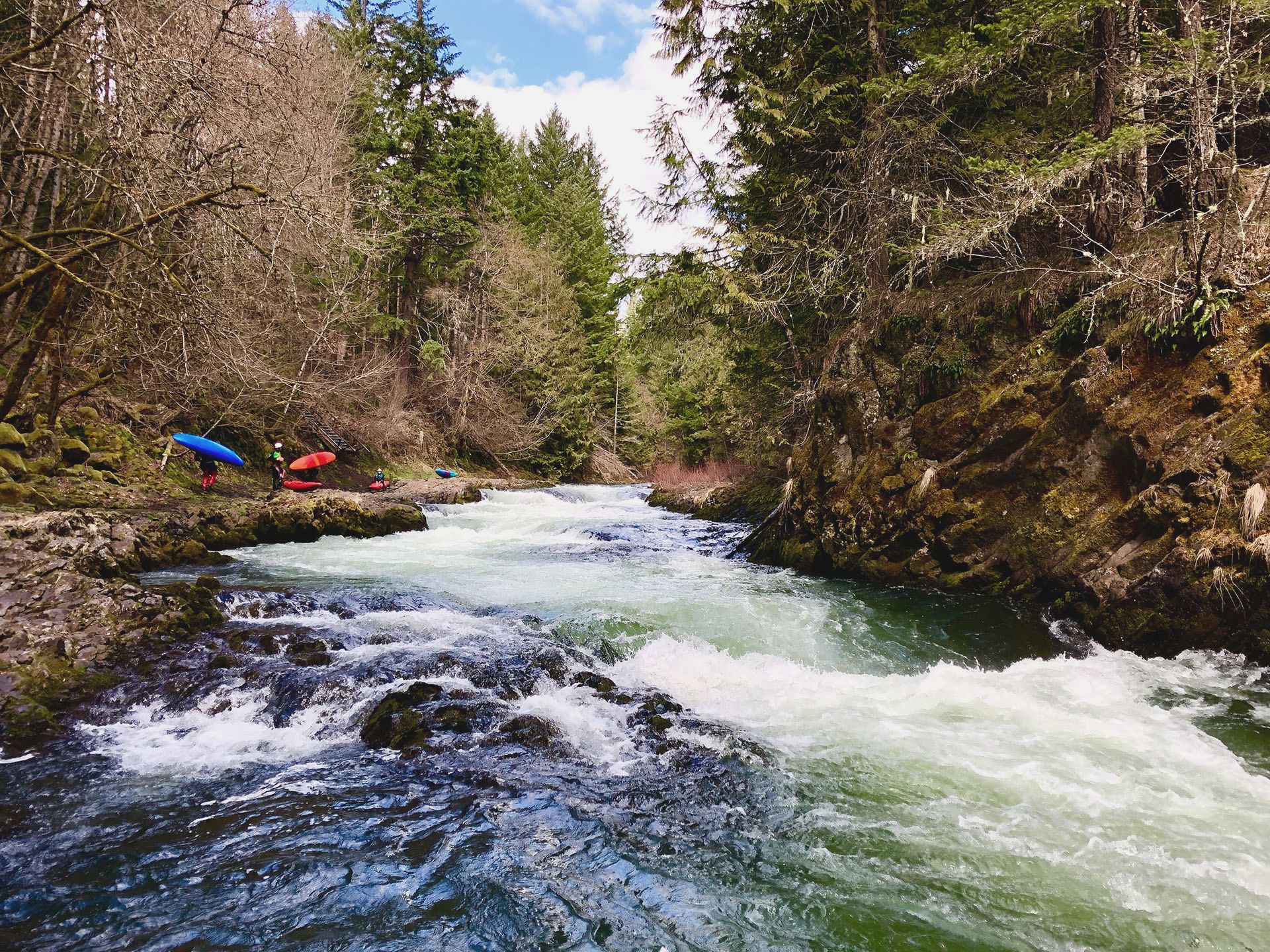 Rather than putting on just above Maytag as we usually did, we hiked up to seal launch into the river below BZ Falls. The day before, a group of us had gathered there to spread Adam Mayo’s ashes in the river. Adam was a mentor I’d met early on in my paddling career and one of my closest friends. He’d passed away on the Jalacingo River in Mexico four months prior.

I had received the news as I boarded a plane to meet him in Ecuador for a winter paddling trip. It turned my world upside down. The months following his passing were landmarked by attending his memorial, caring for his partner, and processing my own grief. But as we gathered on a rainy April afternoon to spread his ashes and paddle downstream with them, it felt like just maybe I’d be able to find some peace.

I’d never done the BZ falls seal launch so J.T. coached me in exactly where to put my boat and when to lean forward. I slid off the rocks and dropped twelve, maybe fifteen, feet to green water and caught an eddy just under where we’d spread Adam’s ashes. We splashed some water to the sky as a final goodbye to Adam and paddled downstream toward Husum Falls. 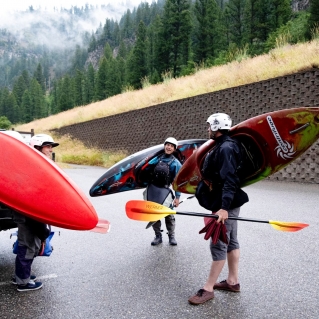 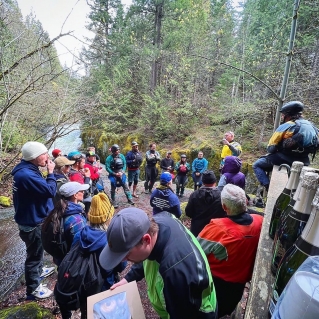 I returned home the next day to a spring snow dumping on the Tetons. Although I’d already put them away for the season, I unearthed my skis and boots and spent the next few days hiking our local 1,700-foot bootpack, touring into the woods on Teton Pass, and skiing feet of fresh powder. Each morning as I dug my smelly base layers out of my laundry basket and went to dress myself, I noticed a pain I’d felt in my back in Washington getting worse and worse.

I’ve always had back pain, usually in the beginning of the season and especially after running a drop or a few big boofs. It has always felt like just a part of the sport and easily manageable with a foam roller, yoga, and some Tiger Balm or Icy Hot. But each morning as I bent over to put my socks on, I’d feel a sharp pain shoot up my spine followed by a dull ache in my low back.

After two weeks of this, I decided to go see my acupuncturist to work out whatever ball of tight muscles was the culprit. But as I told her how I was feeling, she grew more concerned. “Could you have broken your back?” she asked me. I thought there was no way. Another week later, I went to the doctor who took X-Rays and performed range-of-motion tests on my back. When he pulled my X-Rays up on the screen in his office, there was a line through the spinal process in my L4 and L5. 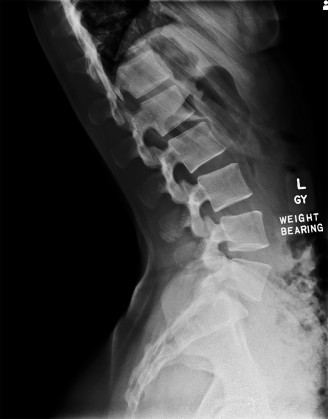 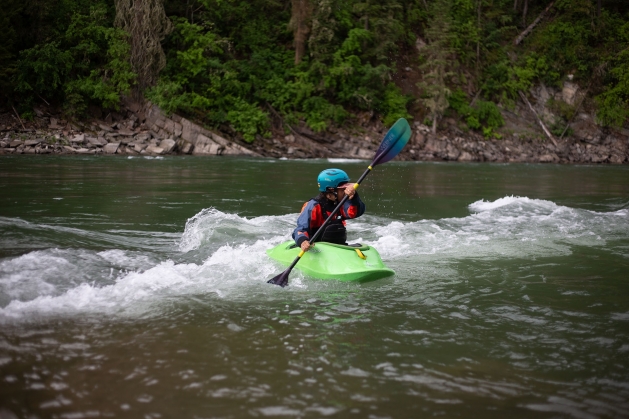 “It looks to me like you’ve broken your back in two places,” he said, “but let’s get an MRI to be sure.” One MRI, a second opinion from another clinic, and six more days of living like I maybe hadn’t broken my back later, he called to say I had indeed cracked the spinal process clean off my L5 and that the fracture in my L4 was old, but they weren’t sure how old. “Can you think of anything you could have done to have broken your back before?” the doctor asked me on the phone. My mind went immediately to all the waterfalls and seal launches I’d landed a little too flat on. In disbelief, I called my parents. My mother was not happy.

Along with the newfound challenges of living with, healing, and managing my injury, I was hit with another wave of grief. I had spent the winter following Adam’s death thinking about my relationship with paddling and wondering if I still loved the sport as much as I once had now that it had taken something so important from me.

The dismal weather in the Tetons continued and the flows stayed low. My motivation to paddle would have been low, even if I had been healthy. But spring finally rounded the corner just as I had started to see a physical therapist and confront the reality of my physical limitations. I couldn’t sit down for too long, stand for too long, carry anything heavy, run, jump, twist, bend forward, bend backward, and kayaking felt suddenly like a distant possibility. My immobilization forced me to confront the feelings I hadn’t reckoned with. 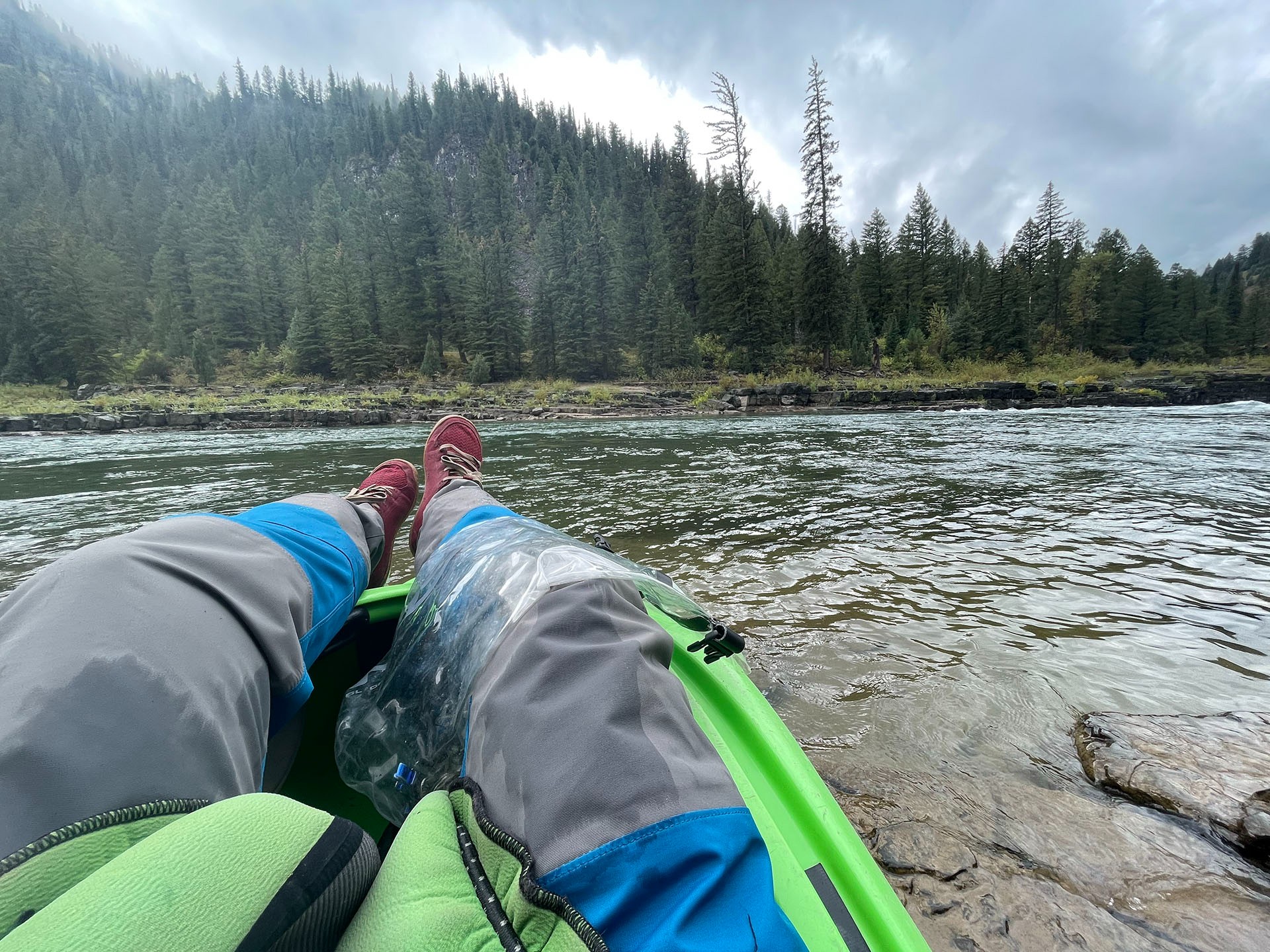 The first feeling was anger. I had backed off paddling anything big or new in Washington knowing my head wouldn’t be in the right place. I couldn’t help but constantly think: “If only Adam had done the same in Mexico, maybe he’d still be with us, and maybe my back wouldn’t be broken.”

Soon after came sadness that my friend and mentor wasn’t there to help me through this injury. Years back, I’d crashed my mountain bike and been unable to go with him and some others to paddle a run I’d wanted to get on, and in my frustration, he told me over and over ‘the river isn’t going anywhere,’ and then tried to convince me it was a crappy stretch of whitewater anyway.

Amongst everything I felt, what surprised me was that I wanted to go kayaking more than anything. While I worked to be able to put my socks on without pain, sit at my desk for more than 30 minutes, and get out of bed on my own, I saw people drive around town with boats on their cars and friends posting about the rivers they were off to run. It riddled me with jealousy and at the same time, I wondered if I was healthy, would I actually want to paddle anyway. 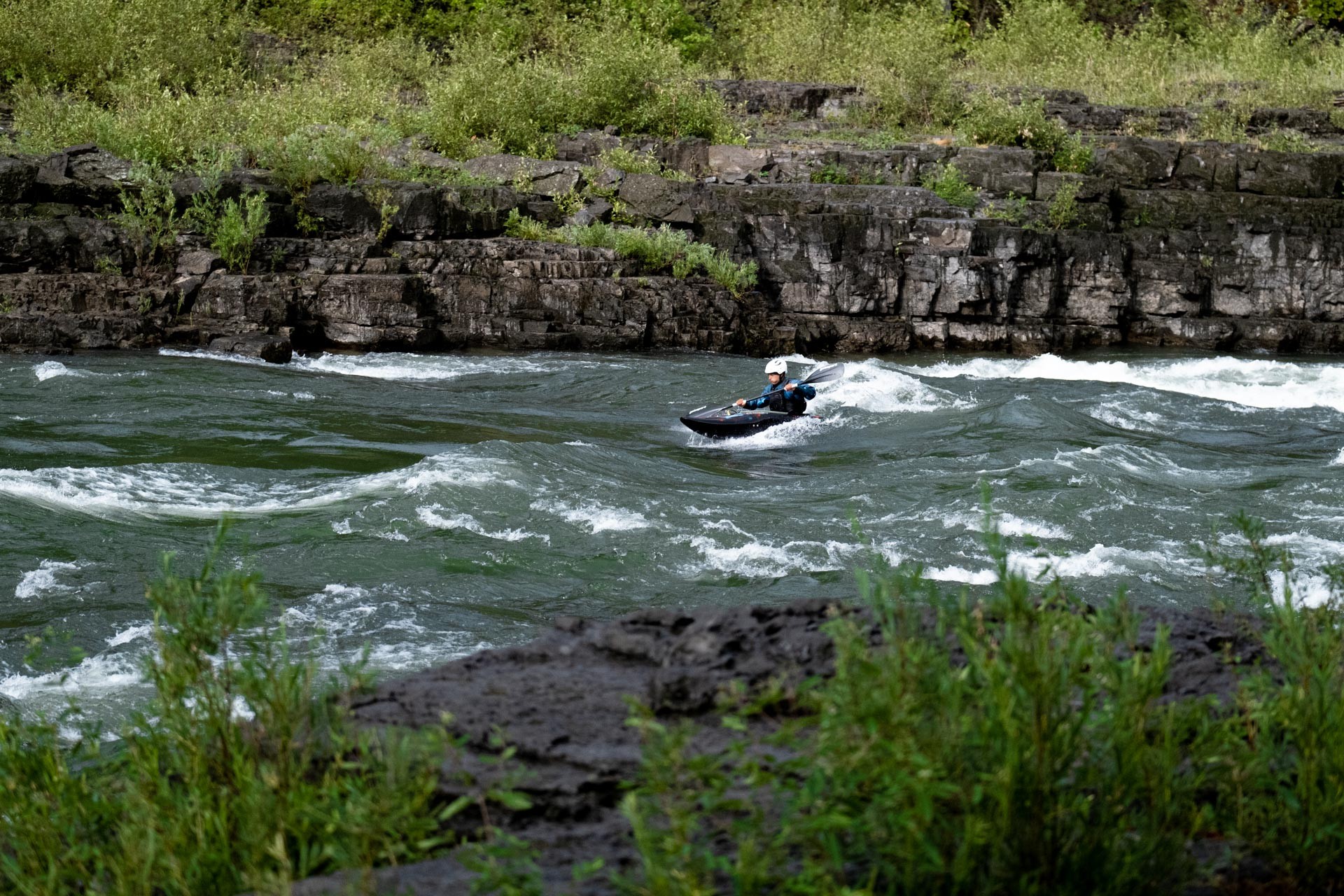 Four long months after that fateful seal launch, I put onto a river again. It was a low-water class II run and I was overjoyed to be back on the river. I had thought long and hard about my relationship with whitewater. The ‘why’ in kayaking had danced around in my mind since December and while the things I found might not be true for everyone, it’s been a reminder in the moments when I miss Adam the most or when my back hurts the most, why I still paddle.

I still paddle for the friends it gives me. This is a cliche, no doubt. But it’s more than just having something we love in common. Paddling demands vulnerability. To say ‘no’ to a rapid, to talk about fear, and to sometimes make life or death decisions, requires us to be the most genuine, vulnerable versions of ourselves in order to have our friends’ backs.

I spent months in survival mode this winter, holding it together for the people I love affected by Adam’s death. I didn’t allow myself to fully process and feel everything I wanted to. When I got back on the river, the first thing on my mind was keeping my newly healed vertebrae safe. As I paddled more and more, I had to continue to be open and honest about pain, comfort, and asking for help when I needed it. 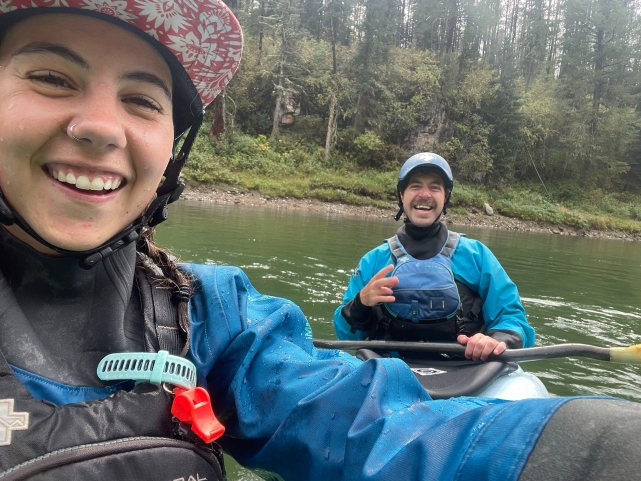 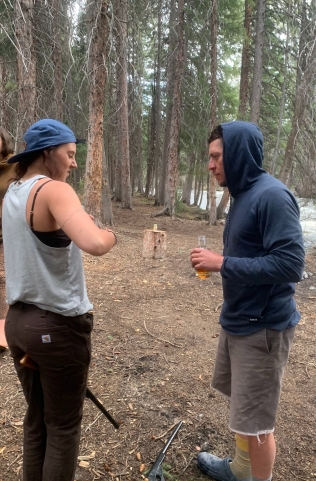 As it turns out, this is the only photo that Izzy and Adam had taken together.

I still paddle because it’s grounding. You never know when things will change, friends will pass, people will move, or another pandemic will hit. What I do know is that if I pull a perfectly timed stroke over the edge of a rock, I will land flat on the other side. If I snap my hips and move my paddle in the right direction and keep my head on my shoulder, I will roll up. There’s not a lot you can count on being true all the time. But paddling, just simply paddling, is one of them and it’s the most grounding, centering feeling.

Finally, I paddle because it brings me joy, plain and simple. After months of grief followed by months of pain, getting back in a boat, on one of my favorite rivers, with one of my closest friends brought me pure joy. Even if I don’t feel totally on top of my paddling, every single day I’m on the river brings me joy. To have a resource like that is an amazing thing and not to be taken for granted.

I’m sure this is not the last injury I will endure, and while I hope Adam is the last close friend I lose on the river, I know that may not be realistic. It feels wrong to find a silver lining in someone’s untimely death and I hate the notion ‘they would have wanted this or that’ about our late friends. I hear Adam’s voice in my head when I’m paddling and he’s always telling me to paddle harder or he’s laughing at me for flipping over on eddy lines. If ever my friends, the grounding feeling I get from the river, or pure joy are not enough, feeling a connection to Adam again is more than enough reason to keep kayaking.

Editor’s Note: Guest contributor Izzy Lidsky is a writer and photographer in the outdoor industry living in Jackson Hole, Wyoming. She grew up rafting rivers around Colorado before turning to hard boats in college. Izzy is stoked that taking photos and writing about the things she loves to do also helps her to pay off things like the medical bills from breaking her back. Her work can be found at izzylidskyart.com.