Kayak Fishing for Giant Cod and Coalfish in Scotland

At roughly one hundred miles off the northeast coast of Scotland, the Shetland Islands are the northernmost tip of the United Kingdom. The islands are known for their wild and dramatic scenery, and the land mass forms a border between the Atlantic Ocean on the west and the North Sea on the east.

The region is well known for its rich and diverse sea life and, of course, its fantastic fishing. Each summer, anglers flock to fish from one of several charter boats that operate trips to the Muckle Flugga lighthouse, the most northern part of the islands and the UK. Getting to Shetland requires an overnight ferry from Aberdeen. Since we were kayak fishing, we headed to Unst in the far north, as several bays offered some protection for us and the best hope of getting afloat. 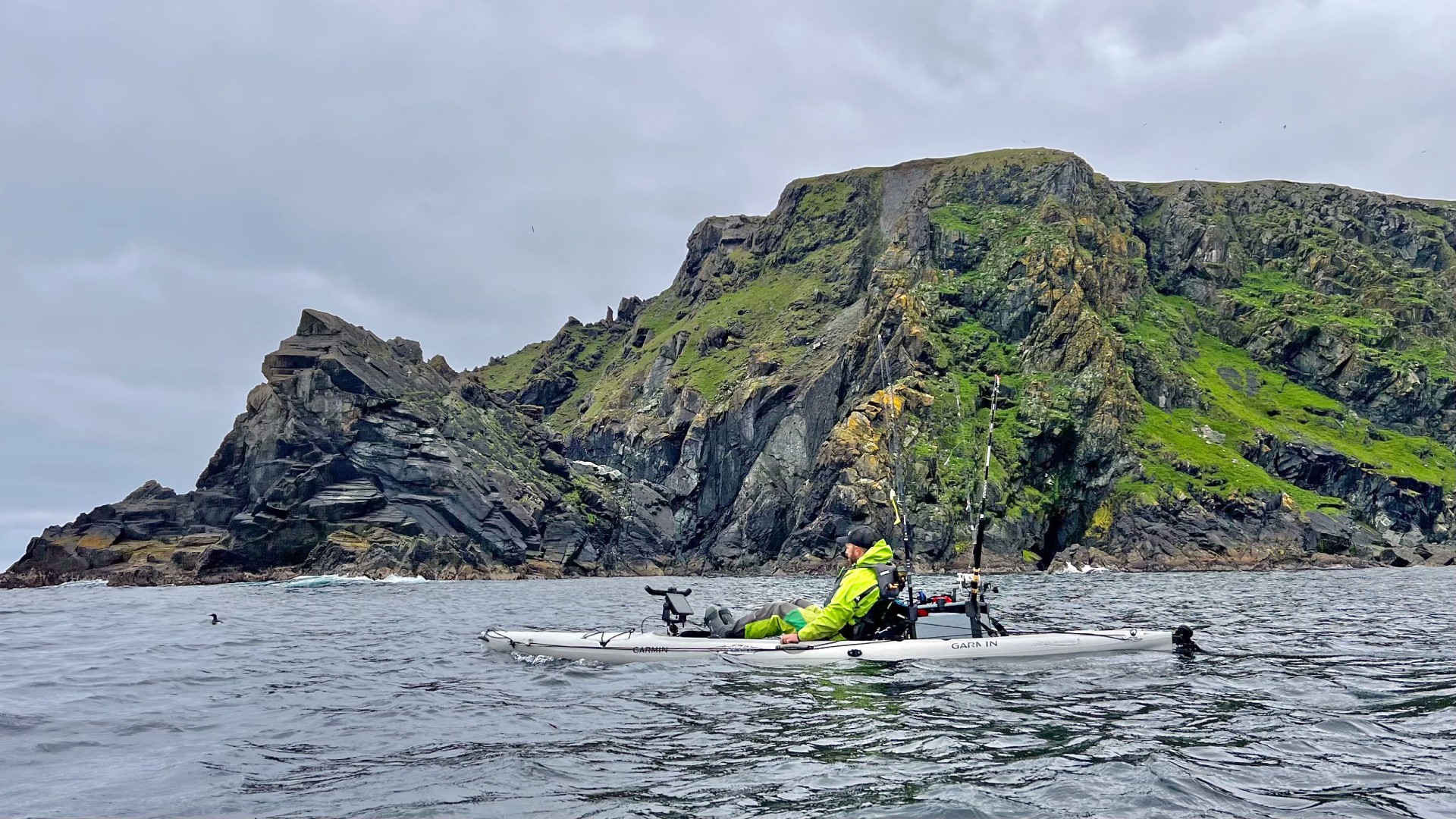 Unst is the most remote and secluded part of Shetland and requires another two ferries to get to. It has very little in the way of facilities and accommodation options are limited. Our best bet was to set up a wild camp on a beach that would give us and our kayaks easy access to some decent fishing grounds within a mile offshore.

As with most fishing expeditions, the weather conditions would play a massive role in our success. We’d been studying the weather for months on the lead-up and knew what we would be up against it. The wind rarely seemed to settle below 20 miles per hour, and when we arrived, it was howling. We quickly positioned our two vans as windbreaks to give us some shelter underneath a communal gazebo that I’d packed last minute. It proved a godsend as it gave us a place, despite the weather, to relax, cook and sort out our tackle in prep for a weather window. 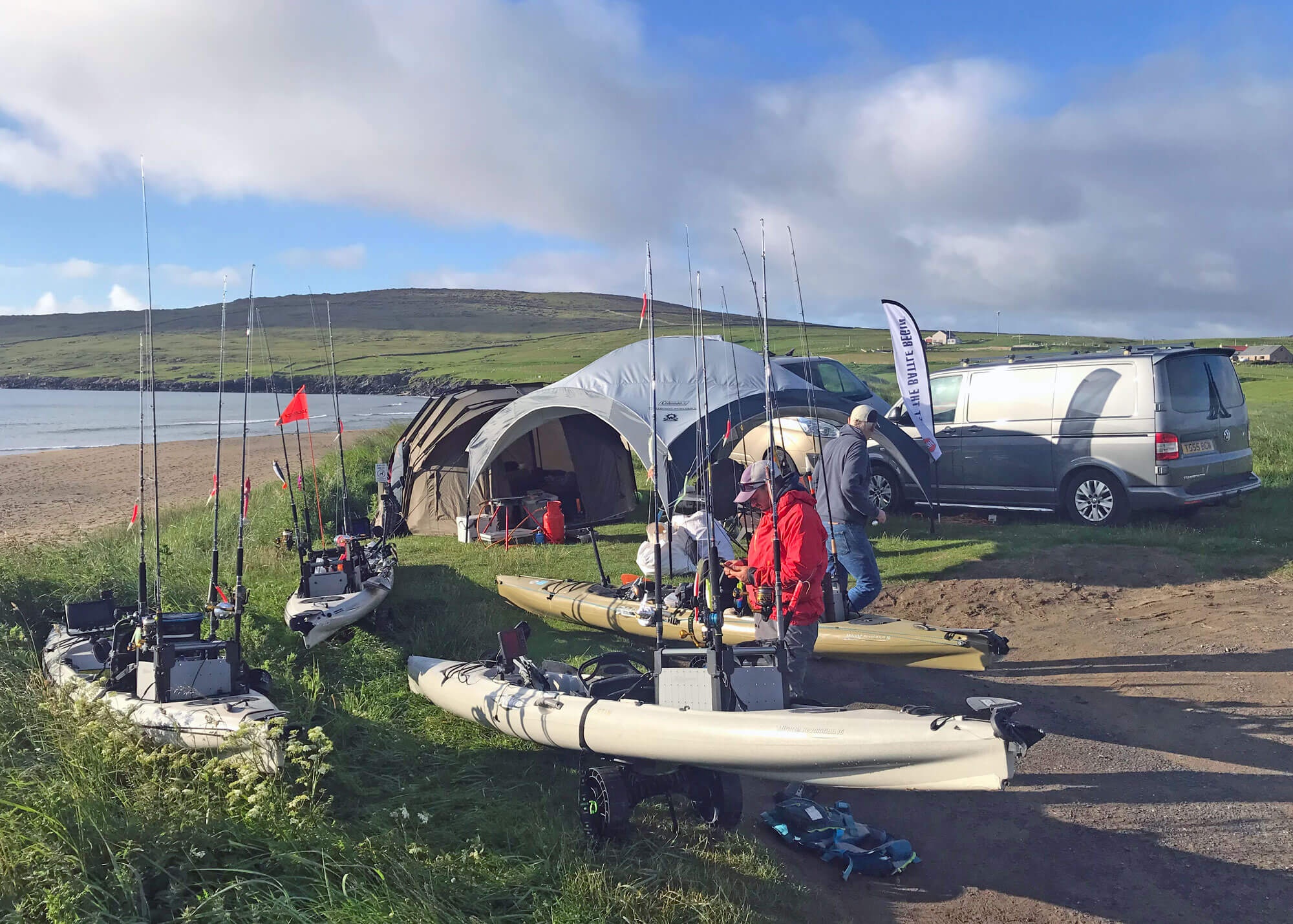 Being July, we thought it might calm a little, but realistically we knew we wouldn’t be fishing all week as some days would be blown out. With nine nights ahead of us, we needed to stay dry, organized and ready to go if the smallest window arrived. Later that evening, the wind did ease a little, so we decided to venture out and have a look.

We dragged the kayaks down on trolleys from our base camp, which was just a short distance to the beach where we could launch. A quick look at the marine charts showed some very deep water at around a mile offshore. It dropped to over two hundred feet and looked like the best place to start some drifts. As we pedaled out in our Hobie Revo kayaks, it quickly became apparent that the sea conditions weren’t very nice. 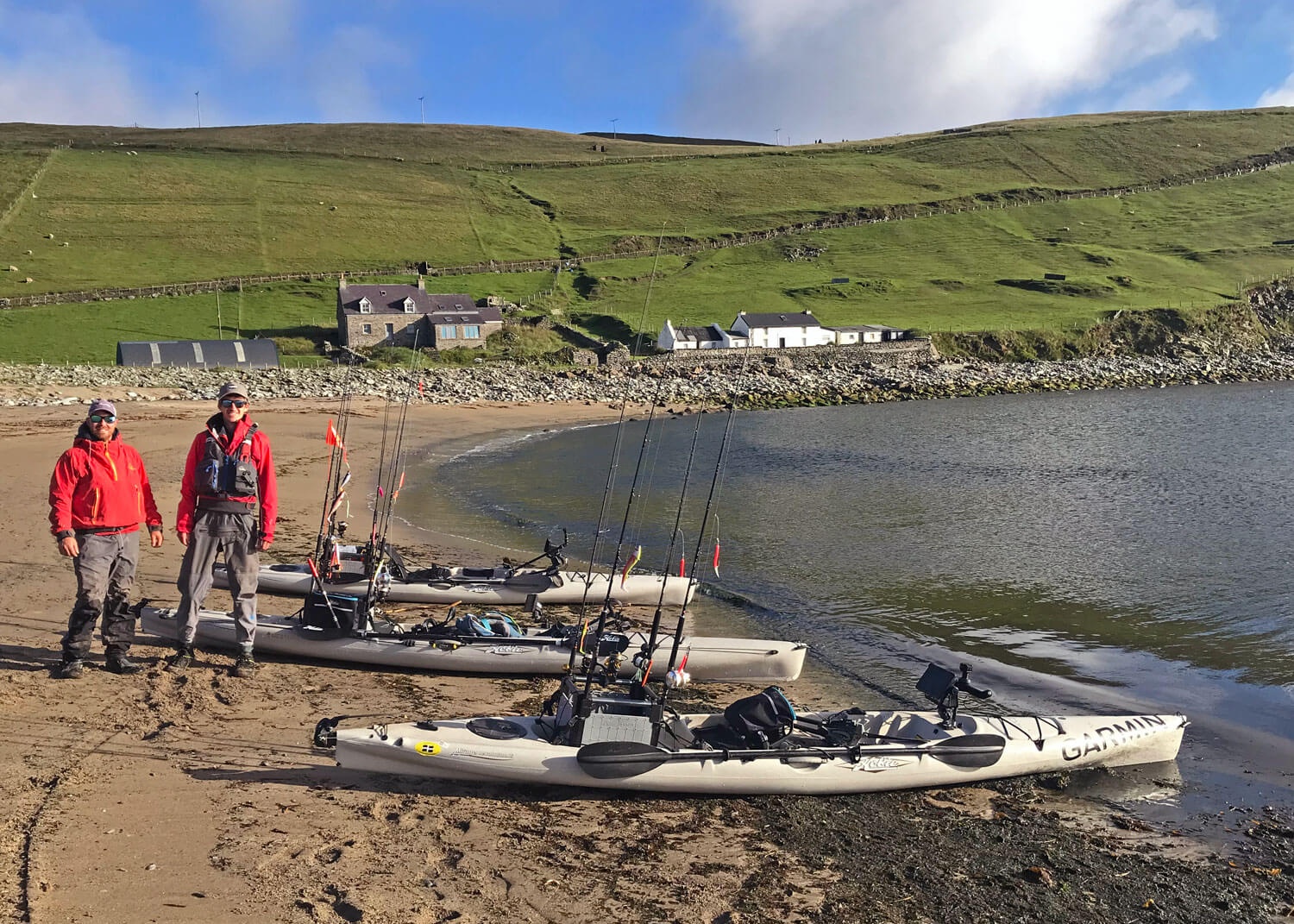 It can be deceiving from land when looking out to sea to assess conditions, and given we were overly excited, I think we underestimated it. The sea state was nearing the limit of what we deemed safe from a kayak. The swells were large enough to consume us out of sight from one another momentarily as we pushed onward to deep water.

We began drift fishing with large shads and heavy spinning rods. The main target was Cod, and fish of over 20 pounds had been caught there in the past, so we were confident. To fish for Cod, you need to lower these lures to the bottom and slowly wind them up around fifteen to twenty turns before dropping them down again. The fish will always be very tight to the bottom, though, with the wind pushing the kayaks along quite quickly, it proved awkward to get the lures down.

Before long, we each deployed a drogue that would act as a floating anchor to help slow the drift. This worked well. I positioned mine from the bow with my anchor trolley, keeping the kayak’s nose facing the wind. Before long, we were all fishing effectively and catching Cod left, right and center! It seemed like the bottom was alive with them, and after an hour, I’d practically filled my kayak and one of them weighed nearly 17 pounds! 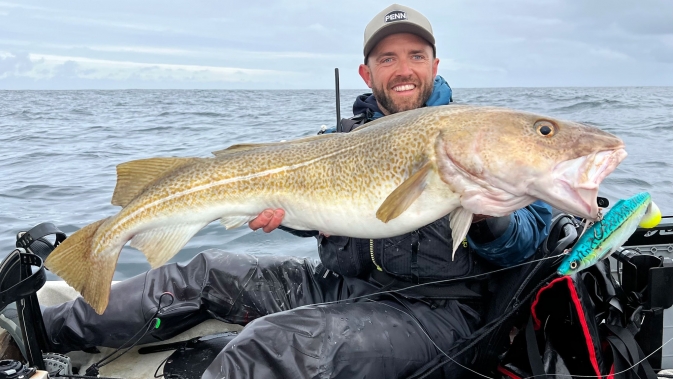 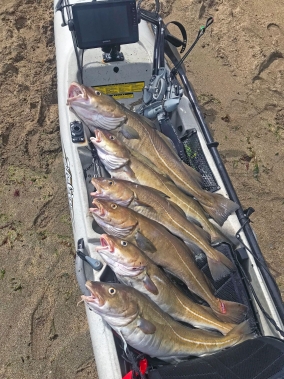 On the return to camp, we filleted and vacuum-packed most of the fish and placed them into one of two freezers inside the camper vans. We had two generators running most of the day to ensure we kept our fish frozen. This also meant we had the power to charge mobile phones and other fishing electronics. We kept a few fish fresh for us to enjoy over the smoker, and we cooked a fantastic paella one evening.

It was cold, very damp and at times quite miserable. The wind seemed relentless and whipped through even the slightest gap between the vans to chill us to the bone. Temperatures barely climbed above ten degrees all week, and our camp soon started to look like a refugee shelter as we desperately tried to dry our clothes by any means possible.

Our clothing was going to be so important on this trip, and I’d brought all my NRS paddle kit, including dry suits, bibs, cags, spare boots and even extra Chinook PFDs, just in case. I wore the Navigator dry suit and expedition thermals most days as the water was icy. 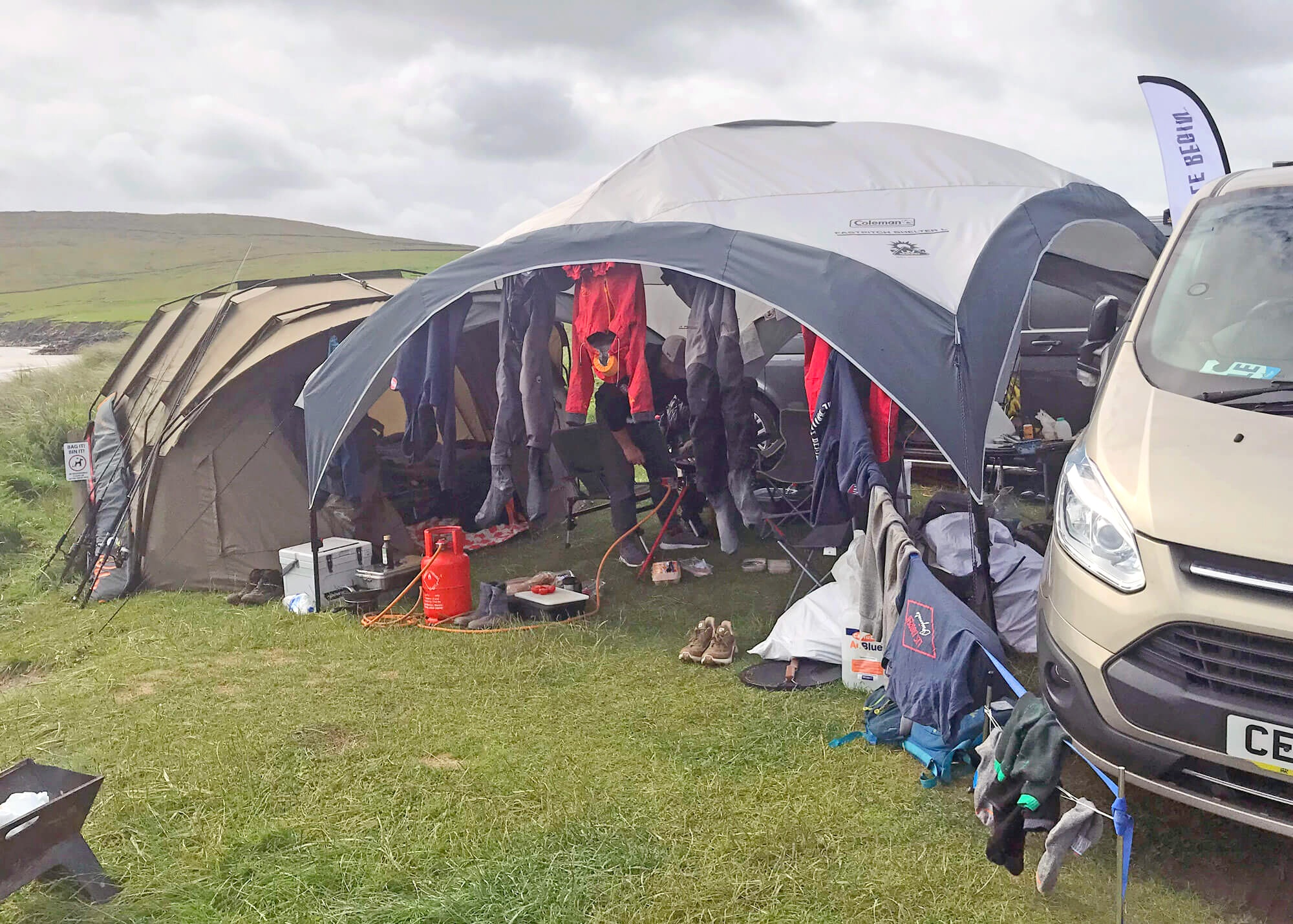 We spent most of the time at camp for the next couple of days, unable to launch the kayaks as the wind was just too strong. It was so windy at times that we feared our bivvy and gazebo would get blown away, ending the week early. We had to ratchet everything down to the van wheels, and I made extra guy ropes out of anchor warp to keep the bivvy in one piece!

Finally, we got a short window and were sure to make the most of it. Tactics remained the same though Liam and I chose to up the lure size to the enormous 32 cm Savage Gear shads to try and find bigger fish. Weighing 600 grams, these lures seemed enormous compared to the 20-40-gram lures I usually use for Cod. They shot to the bottom quickly, and we slowly retrieved them through the Cod schools.

You could feel smaller fish plucking away at them before WHAM; a big cod was on! The larger Cod were more interested in these lures, and they were the ones we wanted. They fought harder and would easily strip drag from the reels. I landed my first twenty-pounder and made my week. Little did I know I’d catch another ‘twenty’ shortly after my next drift! 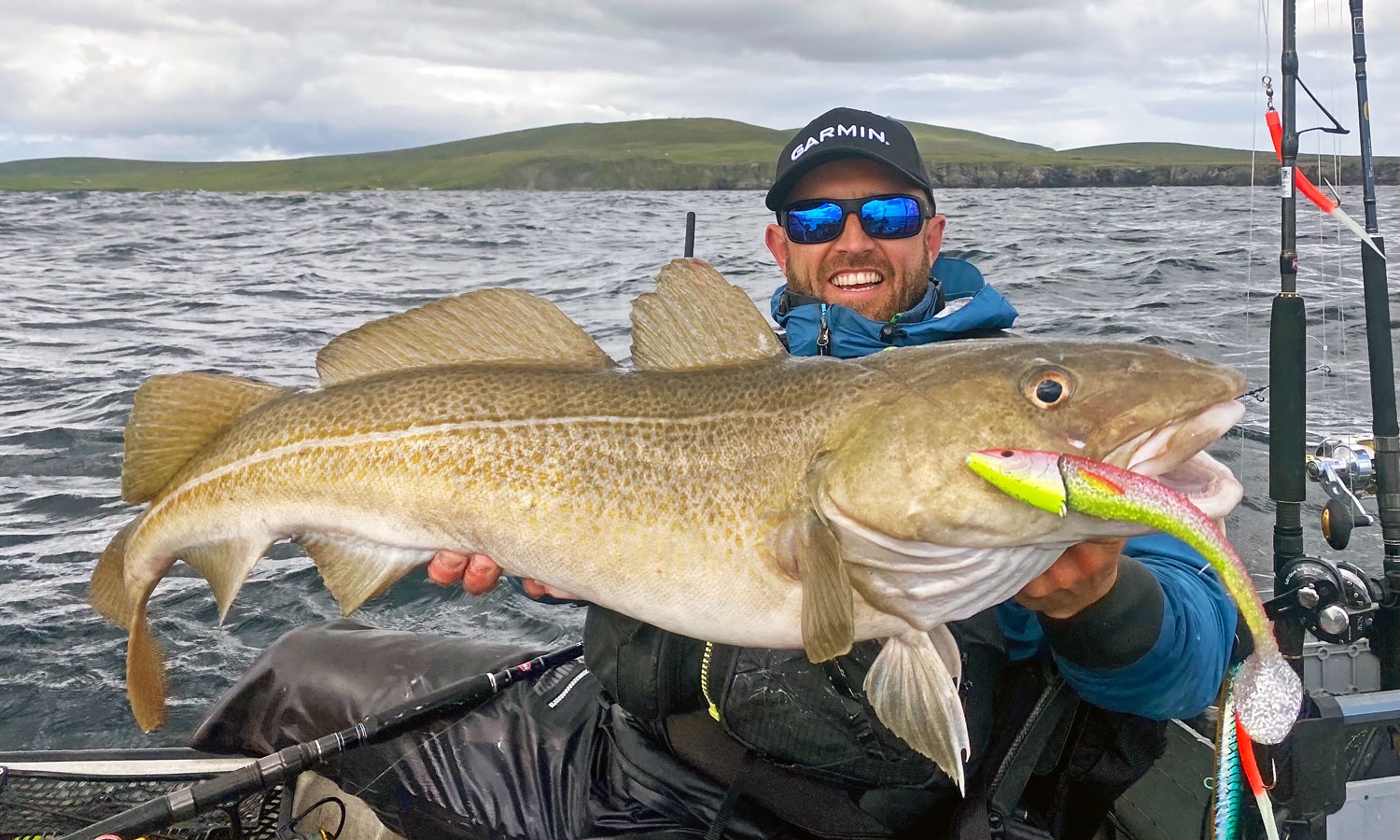 And then, a surprise catch. We knew they were down there but never expected to see one. A kayaker had never caught a big Coalfish from this spot before us, so it was a real surprise. The fish slammed into the big Savage Gear shad as it fell through the water. I had no idea it was a Coalfish until it surfaced and almost lost it trying to get it on board as it was so long and slippery.

It was a good specimen at nearly 16 pounds, and it is hard to believe anglers catch them over twice this size along the Shetland coastline! 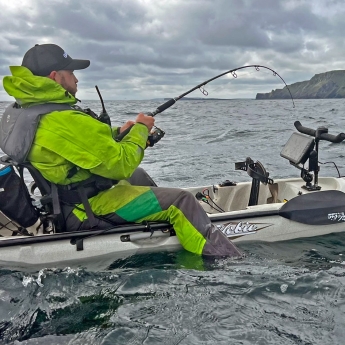 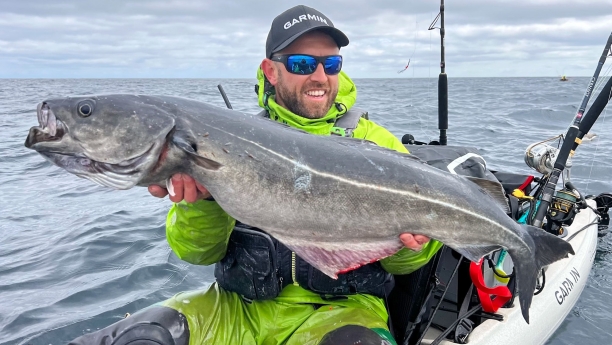 The week was drawing to a close, and despite some very successful fishing, it was clear we’d not get out again for a couple of days. The weather had closed in, and though frustrating, it gave us time to explore the island. After all, we were on holiday!

Just north of our base camp was the Hermaness Nature Reserve, and since we were all interested in bird life, we decided to drive up and walk the five-mile loop around the headland. It was a spectacular spot, like a scene from Jurassic Park. Vast flocks of Gannets, Skua and Puffins filled the skies, overloading our senses. The headland was wild and exposed, and the waves crashing over the rocks below were a fantastic sight.

There were Puffins everywhere, and our presence didn’t bother them in the slightest. I managed to capture some great shots from my camera. 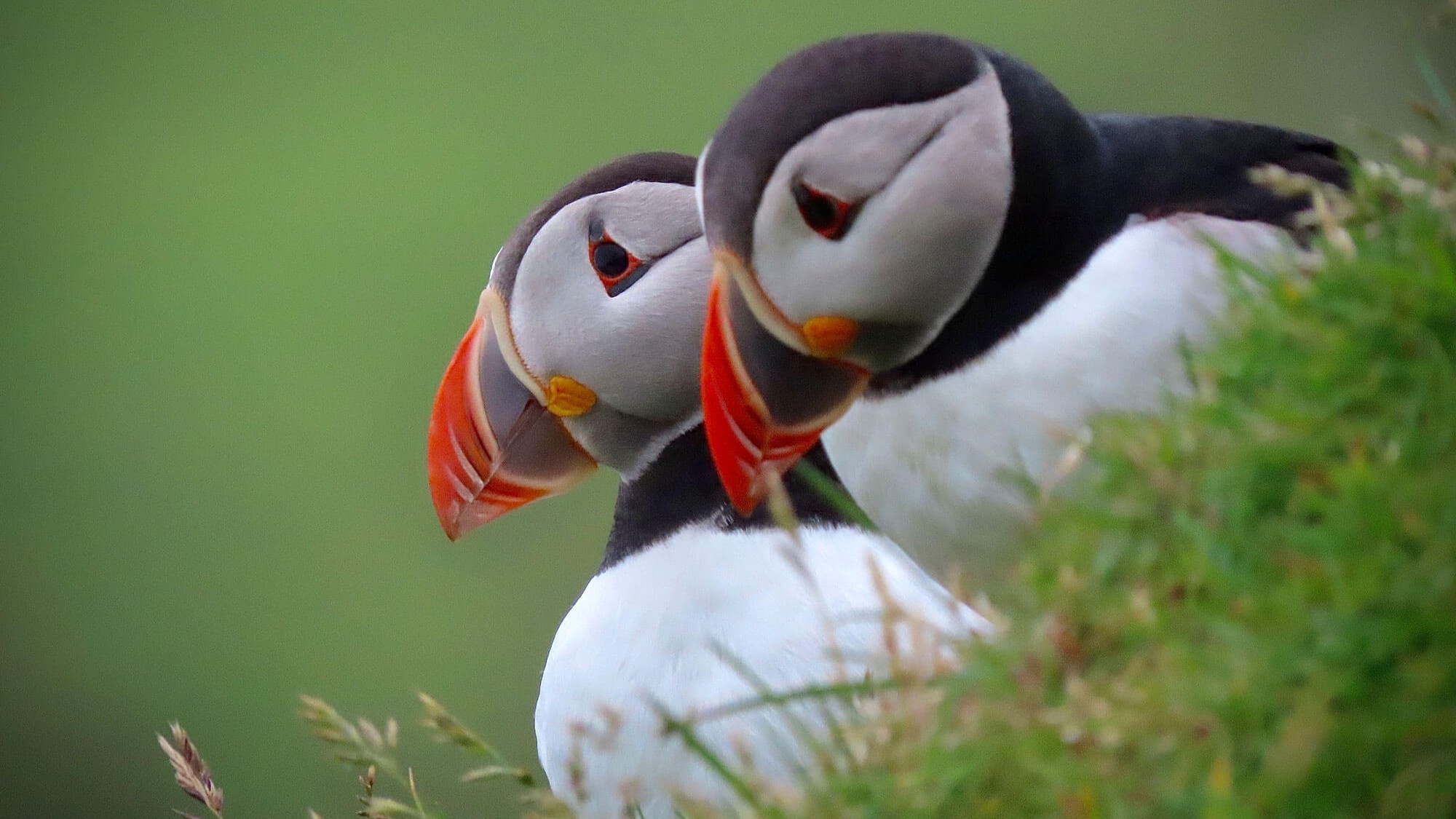 We had one final weather window for fishing before we needed to begin packing everything down and heading back to Lerwick for our return ferry. The weather hadn’t been kind, and out of the nine days, we’d only fished enough hours for a combined single day. I’d traveled up with Stuart, a Welshman and Shetland veteran with several previous kayak fishing trips to this spot. Stuart knew that giant flatfish known as Skate also lurked in the depths. He’d caught them previously, and whilst he spent time ticking off different species for his species hunt, he also tried for a skate.

I watched him hook up and then struggle to land this monster fish for some time. It gave him a beating and we estimated it to be over 150 pounds. A massive achievement from a kayak.

After watching in awe, I knew I had to have a go myself. I resigned my cod fishing tackle in favor of the big gun outfit I’d brought but had yet to use. A 50lb class rod, powerful multiplier with 80lb braid, 200lb leader, and 14/0 hook. Not the sort of tackle you often use off the kayak but precisely what is needed to tame such powerful fish. 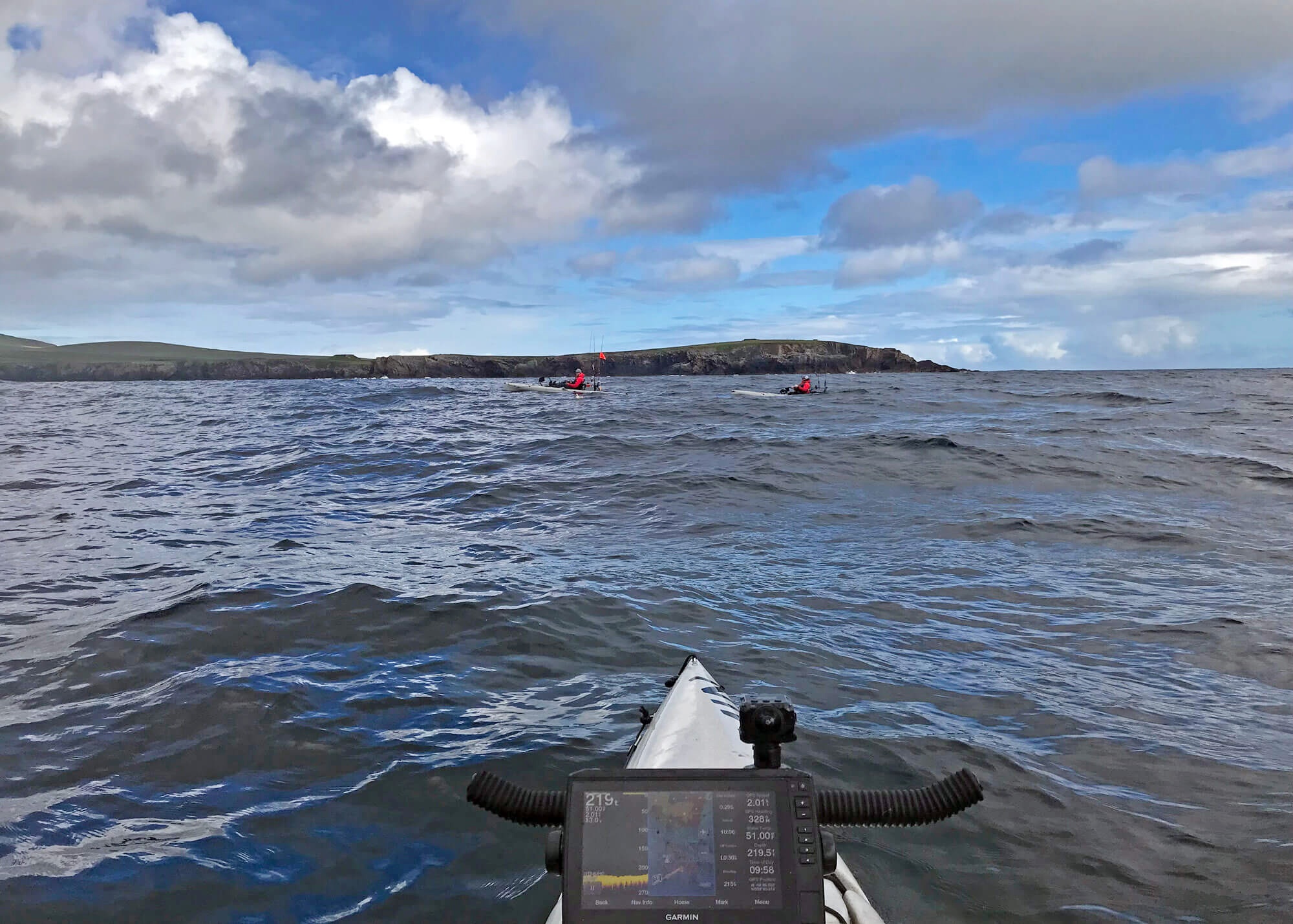 Stuart kindly gave me a big mackerel he’d caught, so I had some fresh bait. I lowered it to the bottom and, after about ten minutes, had a bite. I gave the fish some line before setting the hook. It tore off fast and towed the kayak along on the tight drag. I couldn’t move the fish for the first ten minutes, and it took me around half an hour before I saw it.

It was another colossal skate, not as big as Stuart’s but big enough! We estimated over a hundred pounds, the biggest fish I’d ever caught from the Revo kayak. It was so difficult to hold without capsizing though I did my best to get a photo before it was released. 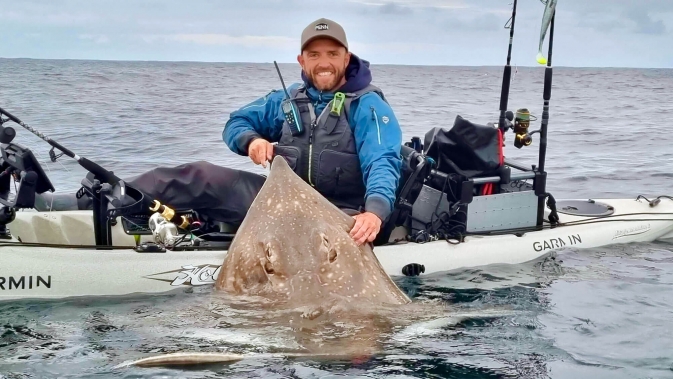 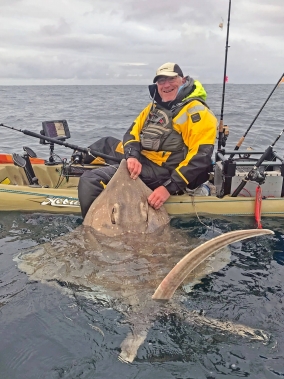 It had been a fantastic week in the Shetland Islands. We’d certainly had an authentic experience, and the Scottish weather had thrown it all our way. We’d done all we could to maximize any small windows, and when we did get out, we each caught some fantastic fish.

My advice to anyone thinking of going to Shetland is to prepare for the worse and hope for the best. Had we not made camp as comfortable as possible, I don’t think we’d have lasted nine nights in the relentless weather. That being said, we knew what we signed up for; it was a real adventure, the fishing was next level, and I can’t think of anywhere in the UK as extreme, so I know we will return!

Editor’s Note: Guest contributor Kyle Waterhouse grew up in Devon and began kayak fishing in 2011. He kayak fishes on both fresh and saltwater and enjoys catching all manner of fish species, big and small.  Today, he lives on the beautifully wild Northumberland coastline. It’s here where his passion for wildlife and adventure has grown to new heights. This story originally published on Kyle’s blog Kayak Wild.