Susan Elliott, NRS Ambassador, newlywed, and traveling kayaker with a serious case of wanderlust, surprises herself with thoughts of adding kids to the mix. Seeing the San Juan river from a child’s perspective leads her to a new perspective on children.

And no, we are not pregnant. 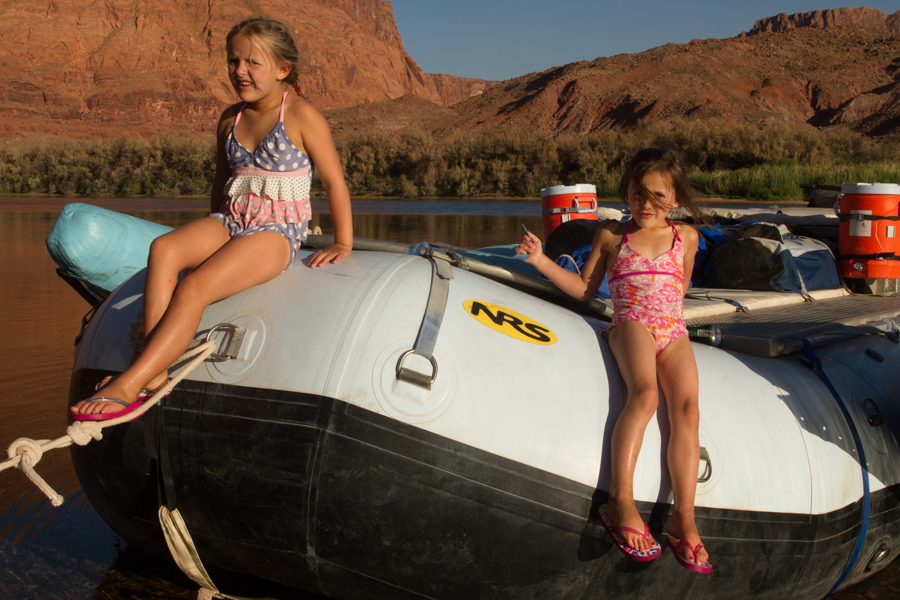 Having kids is scary, as any traveling kayaker with wanderlust will tell you. They steal your freedom and your extra cash; they want your attention and your never-ending support. But something about them also hints at an extraordinary adventure you could never expect. With this thought, and with time spent on the river with my nieces, my opinion has begun to shift.

It began with an Elliott family trip on the Green River a few years ago. As the group meandered our way through Canyonlands, I found myself, for the first time, enjoying the tag-along kids. Two-year-olds wearing sun hats, perching on the front of my SUP board.  Four-year-olds playing games in the sand at camp. All of them falling into the rhythms of life on the river without hesitation. For the first time, kids intrigued me the way a bizarre bug would. 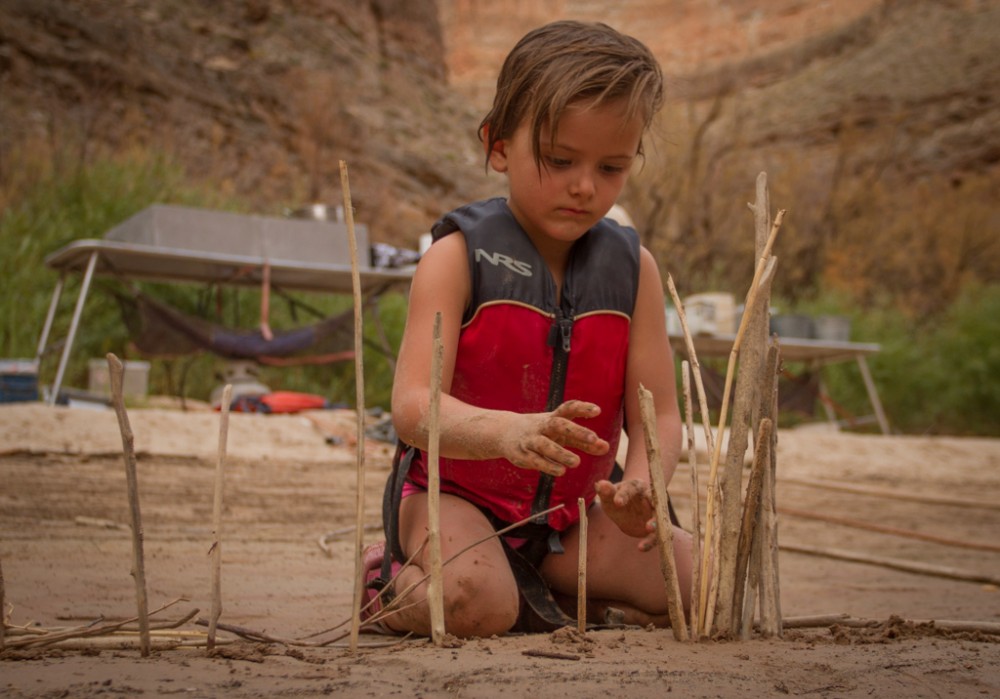 In the Canyonlands, I grew to love having kids along. I’ve giggled at the sound of mine and the kids’ off-key singing as it echoed off the bedrock while floating down the Rogue River. On the San Juan River, we covered ourselves in mud, completely relinquishing any attempt to stay clean. I began to appreciate the way youngsters muster the courage to jump off rocks into unknown waters. How they use the SUP board for a floating wrestling ring, and push their limits when exploring new territory and conquering obstacles. By witnessing their discoveries, I was discovering the river all over again for myself. 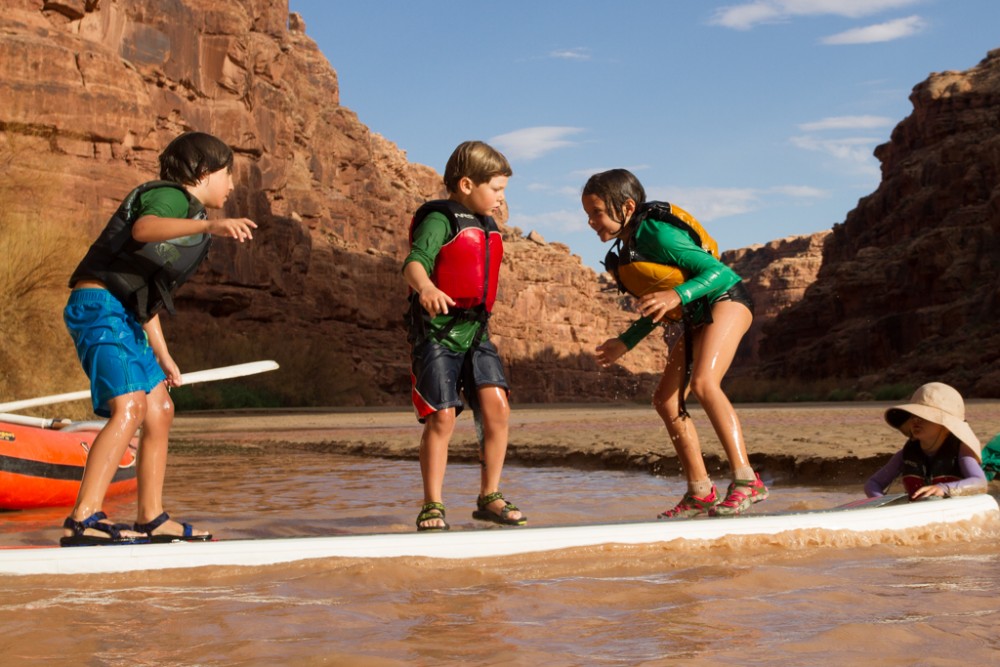 The raft kept floating through the class II rapid, unable to detect the absence of India’s tiny, four-year-old body. She had bounced out of the raft and beneath the thick, cocoa swirls of the San Juan River water before her vocal chords could respond to the surprise. She dipped below the surface for an instance before her life jacket burst her back into the air. She screamed. Waves lapped at her face, but her life jacket kept her bobbing along the surface.

I paddled my ducky to her, and fished her out of the river like a big, squirmy humpback chub. Although she was shaken and scared from her experience, the adults were not worried. In fact, her mother was so calm it seemed as if nothing out of the ordinary had happened at all. India calmed and quickly forgot about her big swim once the Go-Gurts came out.

India’s second whitewater swim—an intentional dip in the rapids—was shared with the other kids and ended with smiles. 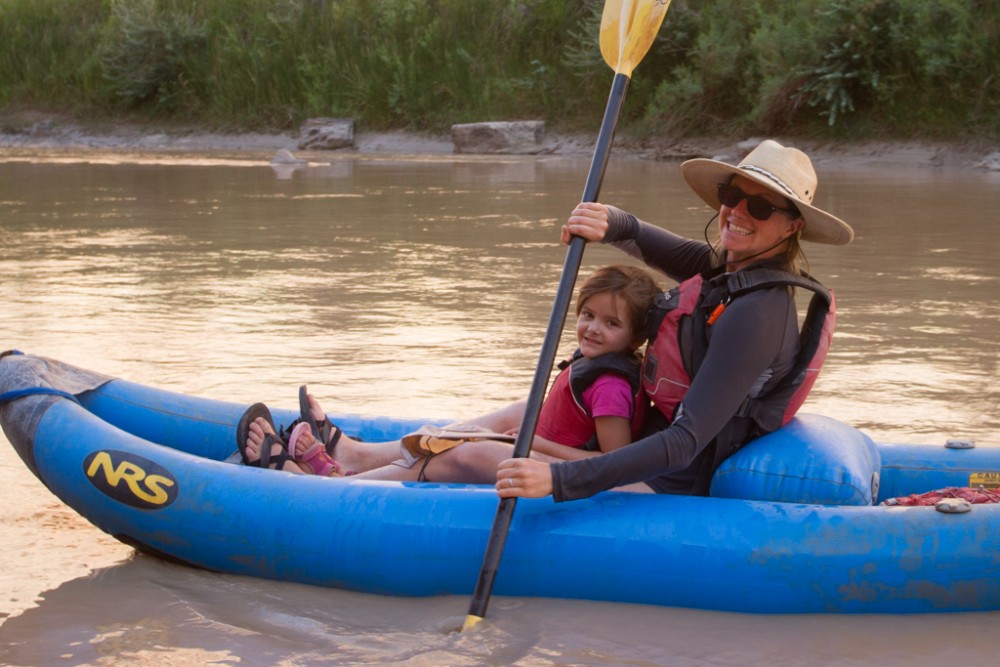 To avoid the harsh July sunlight at Ledges Camp, we rowed to the opposite side of the river to retreat under the shade. We climbed the rocky wall to reach the cool ledge. A watercolor set and a willing shirt-less daddy occupied kids while other adults read, chatted, laughed, and sipped on refreshing beverages.

Agenda-free, we watched the shade encroach on our camp, signaling that it was time to leave our ledge and cross the river back to camp. But we were raftless. During our shade-gazing, one adult had rowed the raft back to begin dinner preparation, without the kids. The only way across the river would be to swim down the small wave train.

Clinging to the adult’s hand of their choice, each kid jumped into the river to ride the rapid down. Joyful shrieks echoed off the canyon walls. India and I sat poised to make the plunge. “I’m scawed,” she admitted through a smile. The unsuccessful r sounding more like a w, “and also vewy excited,” she added. I began the requisite get-a-kid-to-do-something countdown: “Ok, we are jumping in three…two…one!”  She squealed with anticipation the whole time.

We jumped. Again, she dipped below the surface and bobbed to the top among the waves and current. This time she shouted with jubilance. More laughter came with every crashing wave. Climbing onto shore, she and the other kids all begged for another turn.

That first scare, followed by the immediate intentional rapid swim, will help develop my niece’s reaction to fear and discomfort. Not only will she think of that moment on future river trips, but also at home, in school, and during everyday challenges. 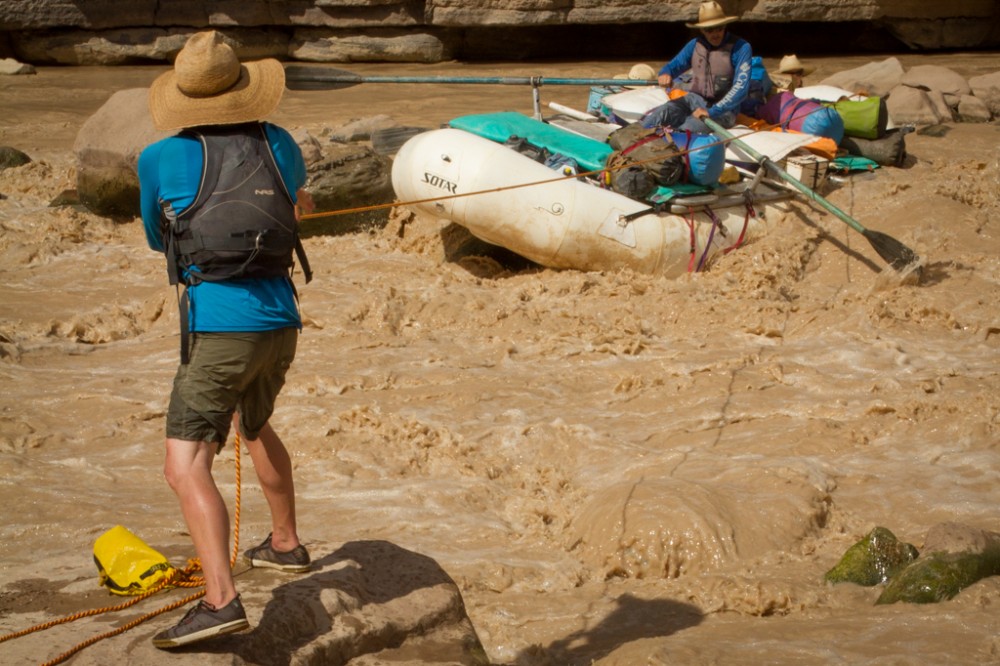 The river lifestyle—multi-day family raft trips, van camping at the take-out, exploring foreign waters—seems more and more like the perfect place to raise a child.  Not every day, of course (that would be a lot of groover duty), but as a regular family activity for weekends and vacations. The river provides all the ingredients for experiencing life and learning to appreciate the mysteries of the outdoors.

These maternal thoughts come as a surprise to me, an adventure-seeking river lover. But the more I participate in family life on the river, the less it scares me, and the more it seems like an enticing adventure.

And, no, we are not pregnant.