The Stikine: A Season Finale

I sat on the banks of the river as the spring flows lapped against the shore, waves whopping my boat because I was too lazy to drag it any farther onto the beach. A four-day descent of nearly 250 miles of Idaho whitewater was a pretty good way to kick off my final boating season before heading to nursing school on the East Coast. This was it. The last spring spent kayaking and reveling in mostly unhindered river logistic scheming. 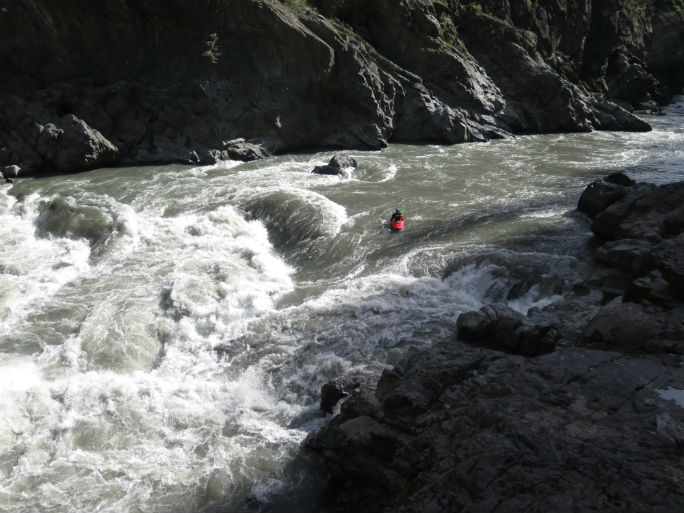 Whenever the phone rang after a rainstorm, or a text pinged while I swam in anatomy and physiology flash cards, I begged for it to reveal a distraction from school life. Please be describing some hair-brained mission to escape onto a river. I suppose that’s why I had a kayak sitting in the garage, a mesh bag full of my paddling gear propped against it. I could be gone at a moment’s notice. The East Coast was calling, but I’d be damned if I wasn’t going to use my waning time out west to soak up as much paddling time as I could.

Weekend trips to the Little White, followed by a four-day rally to California (me studying in the passenger seat until we arrived) to paddle the Yuba and Feather rivers. A handful of Idaho desert river self-supports. A few high-water South Fork Salmon laps. Catching the Middle Fork and Main Salmon at peak runoff for the year. Coming off a 200-mile, three-day paddle to catch the South Fork Salmon for its peak runoff, too. Flying into the backcountry to paddle three tributaries. 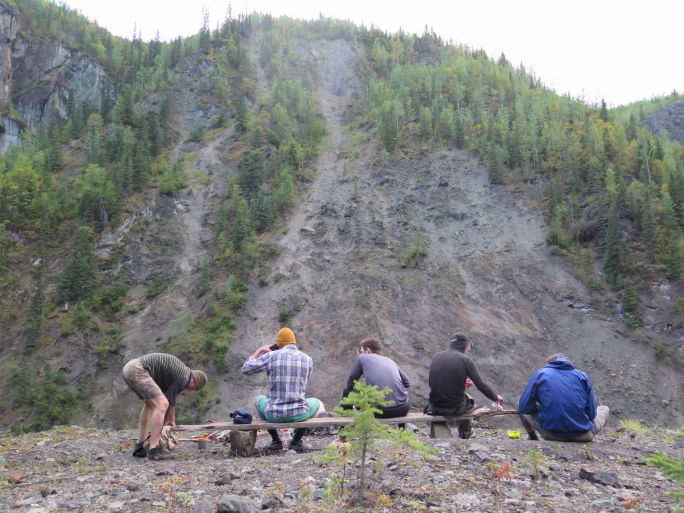 Yeah, the season was sizing up pretty well. A full summer of guiding on the Middle Fork was the only thing between now and filling my truck to the brim with the flotsam of school life and urban-apartment living. 16 months of pure mind-crushing academia and pharmacology. (My recreating buddies better be thankful when I know how to put them back together after a big crash.) With all of that coming down the pipe, there was just one last thing I yearned to be icing on the cake. (Drum roll.) The Stikine.

Wouldn’t it be phenomenal if, by some grace of the paddling gods, I could wrap up an entire spring and summer of kayaking and guiding in pristine wilderness with amazing friends by pilgrimaging to the ‘Great White North’ of British Columbia? To paddle one of the most intimidating rivers on the planet, terrify myself, fry my nerves and adrenal glands, then mosey my ass to the East? “Yeah Kyle, it would be amazing,” I said to myself. But I never thought it would happen. Too many things would have to line up.

“There’s work scheduling between myself and the crew. I’m nowhere ready for school. My girlfriend is waiting for me in Boston. I haven’t paid my tuition (hell, I don’t even know how I’m going to pay my tuition). The flows of the Stikine are fickle at best. And (for God’s sake!) I haven’t been paddling anything harder than class III for over two months.” I rattled off excuse after excuse. It was impossible—I wrote it off. Then, as I returned to service following a two-week trip in the Frank Church Wilderness, my phone pinged. A message from Big-Water-Bond: “Stikine is in!”

I sighed. Son of a bitch. 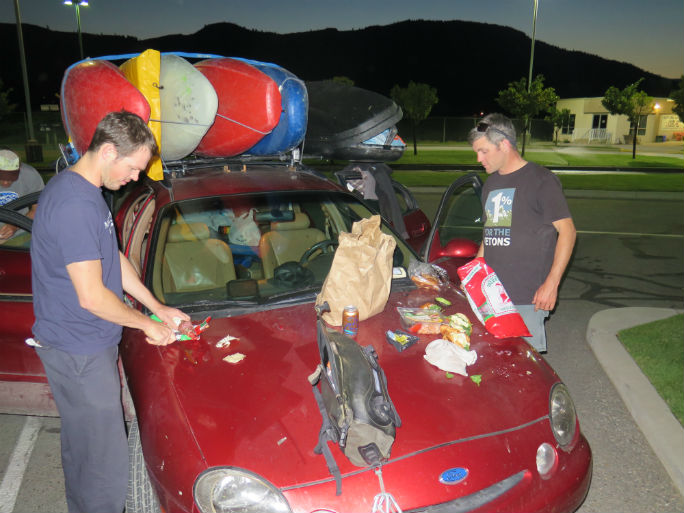 I made phone calls to my university advisor(s), financial institutions, girlfriend (tears to be included) and family members. Straight off the grid, I had 48 hours to be packed, mentally prepped, and in the car heading north for one of the most committing river expeditions I know of. Luckily, I managed to squeeze in a run on the North Fork of the Payette to brush the rust off before leaving Boise in the Ford Taurus. Bond came straight off a 12-hour ER shift and we made way for the banks of the Stikine early in the morning.

I couldn’t believe this was happening. I was shitting myself—part giddy excitement, but mostly nerves. We had a 36-hour drive. Just enough time to read horrifying accounts from legends like Doug Ammons, peppered with plenty of disturbing stories of people hiking-out through wilderness, thick with grizzly and moose. Mental notes taken: Don’t swim and don’t put on when it’s raining. 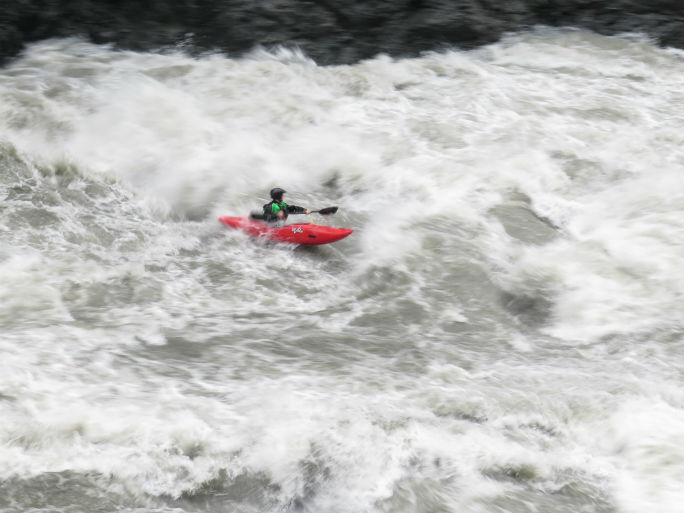 As predicted, we arrived in British Columbia 36 hours after peeling out of the Boise hospital’s parking lot. We spent the next day packing, unpacking, and repacking before heading to the put-in. The following three days were filled with deep canyon walls the color of black onyx and speckled with white dots, which turned out to be mountain goats. We paddled extremely difficult and committing whitewater, often without an opportunity to scout any more than the first 50 yards of a quarter-mile long rapid. Roshambo and go! 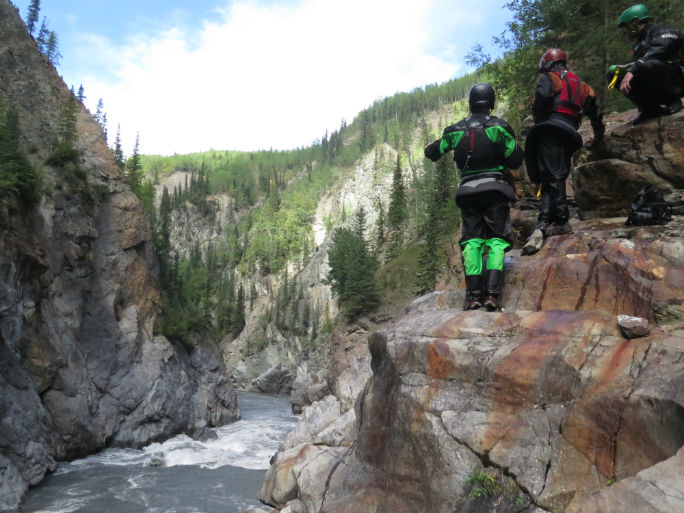 The sand flies tore at our flesh insidiously. Slow and constant. We wrapped ourselves in every light piece of clothing we could, covering every possible inch of skin. They still got at our eye lids. Had I not learned my lesson in Peru? Man, the things we would have bartered for a little mosquito netting. Luckily, the weather was pleasant and sunny, uncharacteristic to the typical rainy and cold. We reveled in the warmth of the sun and the ability to dry our gear after long days locked in the canyon. 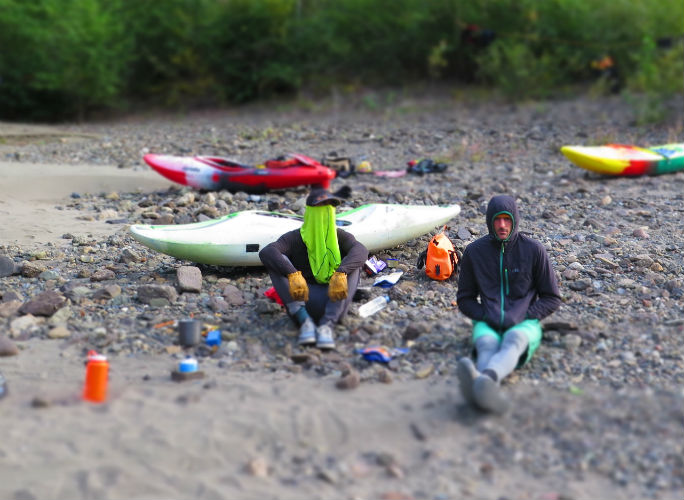 We had the pleasure of paddling alongside a few whitewater legends: Gerry Moffat, Willy Kern, Ryan Casey and Scott Lindgren. They’re veterans of the canyon, as well as of some of the greatest river explorers of all time. Psang Pso ring a bell? It was humbling, a little unsettling, but oddly reassuring, to see them as nervous as we were for what the following days would bring. They always set off a couple of hours before us, as we—four paddlers that had never experienced the Stikine—lingered in camp. They left us to explore the canyon for the first time on our own, with fresh eyes and little expectation. Navigating alone is an amazing way to see such a spectacular place, as well as to test one’s whitewater reading skills and team dynamics.

We reached the take out roughly 72 hours after getting to the river. As Willy Kern has said before: “Nothing was different, but everything had changed.” As is with every river, we would take something special away from that place, a memory cemented in time. Full of laughter, fear, joy, awe, anxiety, and respect for places like these and the moments that we have with our friends in them. 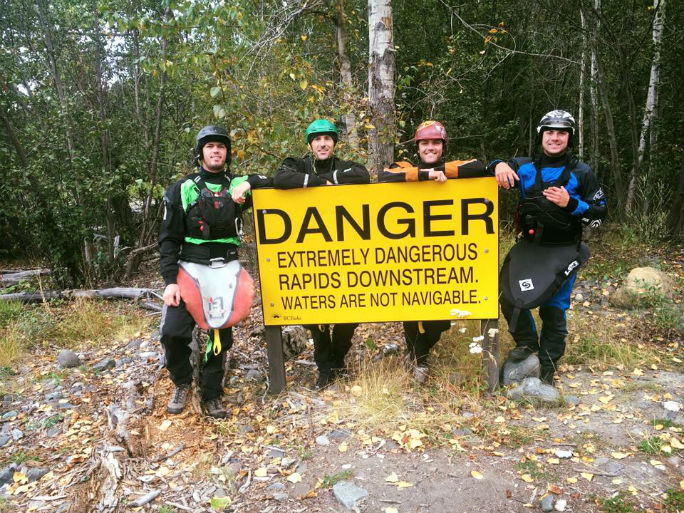 After a hardy intake of greasy food and poutine (a Canadian special of French fries topped with fried cheese curds and gravy) the crew dropped me off at the airport, where I left the country early in the morning and arrived back in Boise late that night. The next day, with adrenal glands exhausted, I loaded my truck. That just happened, I thought as I pulled onto the interstate heading east. I eased into the driver’s seat with a smile on my face. On to the next journey.