As a raft on Alaska’s Six Mile Creek approaches a class V rapid called Suck Hole, the guide holds the raft broadside to the current and watches for her target. When the timing is right, she pulls stern first with a slight downstream angle toward a small wave. The raft crashes through the foam pile and stalls in the eddy line behind it, pivoting the stern upstream. 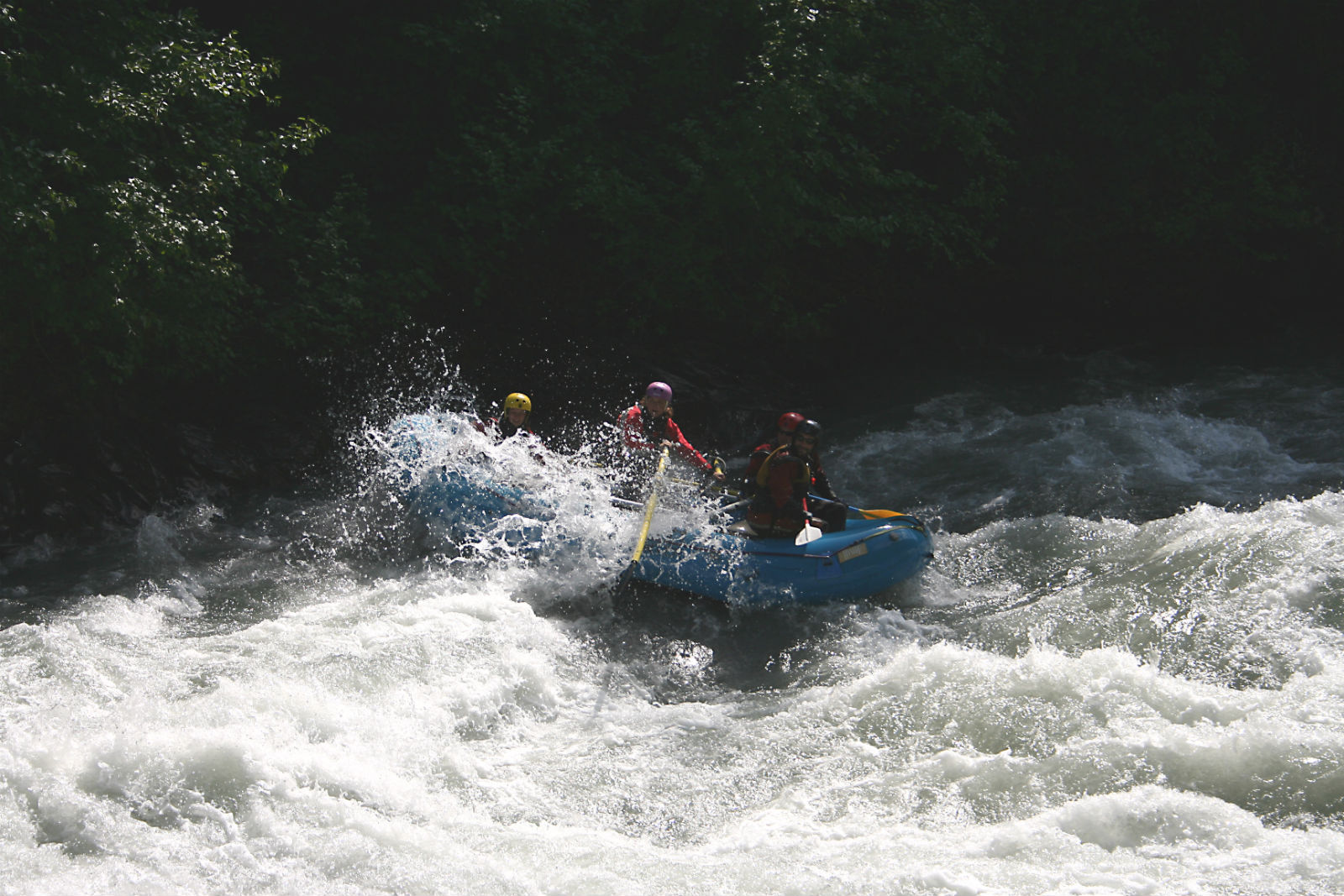 “All back,” she yells, but after only two strokes, “Stop.”

The guide pulls once more, ships her downstream oar, and rudders her upstream oar to maintain the angle. The eddy line along the canyon wall pulls the raft to the right. Once she is in the correct spot, the guide calls all forward, and punches the right seam, sliding past the strong hydraulic in the middle, which gives the rapid its name.

The rapids of Six Mile Creek are intricate and unforgiving, the current always pushy. When the summer snowmelt begins to raise the river levels, the guides strap oars and frames onto the rafts in order to have more control in the whitewater and better stopping ability in between the rapids. Until working in Alaska, most of my whitewater experience came from paddle rafting and kayaking the rivers of the eastern United States. So my first season guiding on Six Mile with its combination of high volume flows and technical rapids proved to be a humbling experience. However, it taught me the nuances of using oars. 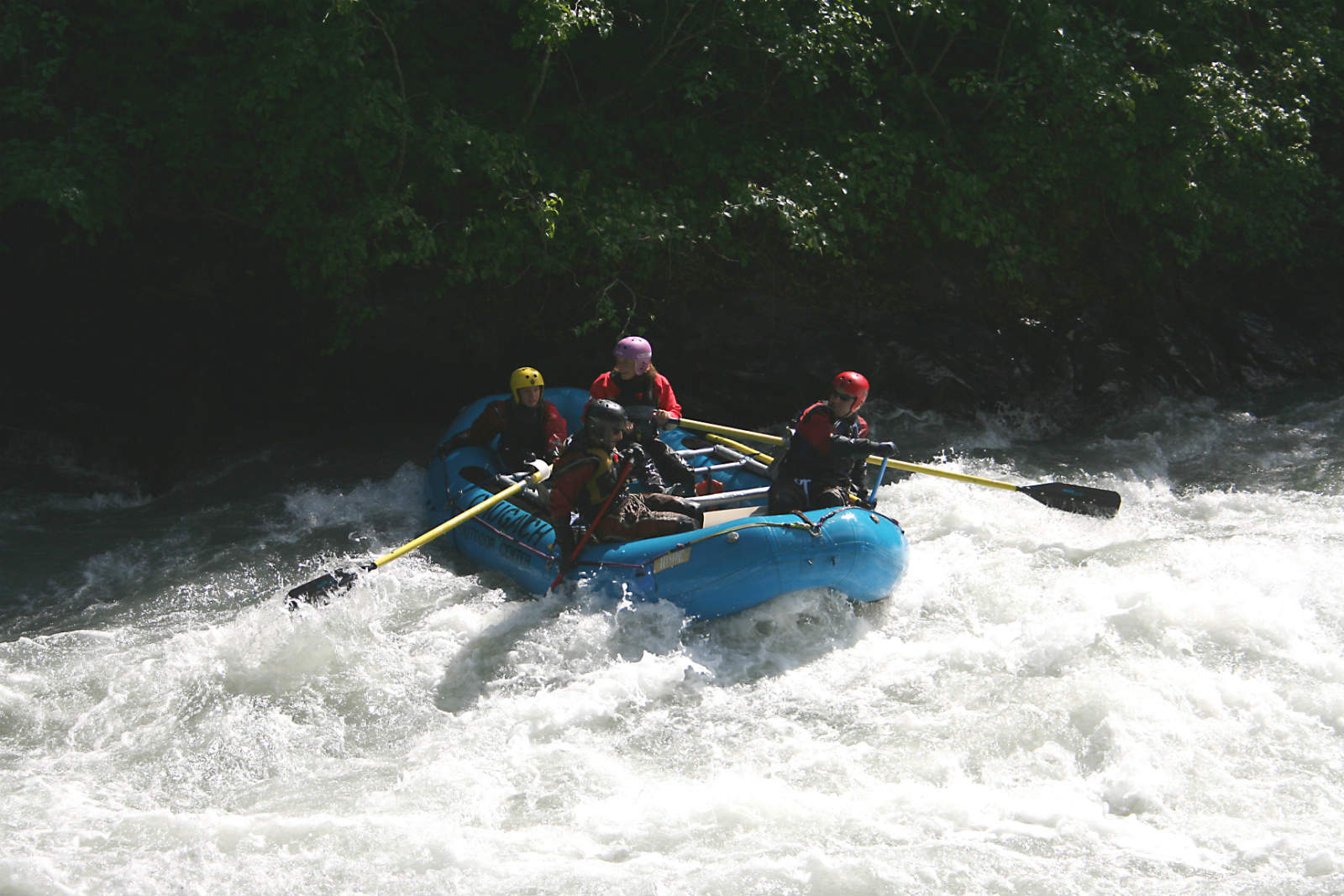 The most important of these skills is a technique where the guide pulls the downstream-angled stern first into a feature such as a wave, pour over, or eddy, which will slow the raft and subsequently, turn the stern upstream. From there the guide back ferries into position. This maneuver has different names depending on where you guide, but I refer to it as a stern pivot. It’s a move uniquely suited for the pulling power of oar rigs, and it’s a skill anyone using oars should make him or herself familiar with.

Suck Hole is one of the most difficult rapids on Six Mile, and it’s a great example of how a guide can use the stern pivot to navigate complicated whitewater. The main part of the rapid is a small ledge that forms a raft-flipping hydraulic. The only way to punch the hole is to hit a narrow seam along the right wall. But there’s a guard wave just above the pour over, extending from the right wall to the middle of the channel. At high water, if you try to drive downstream bow first, pushing on the oars and calling for forward strokes, the wave tends to kill your momentum and send you into the hole sideways. 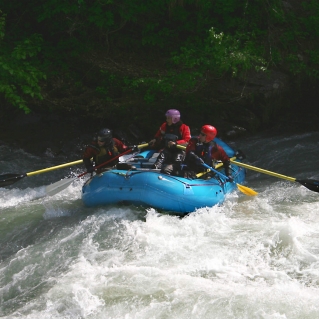 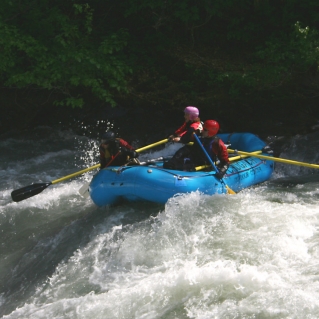 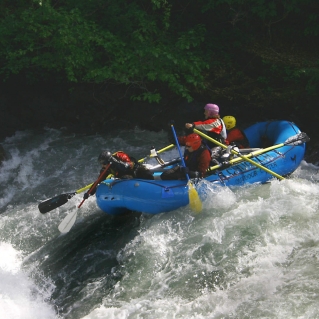 This is where the stern pivot proves useful. With the stern pivot the momentum the guide uses to start the downstream ferry is the natural propulsion of the heavy raft in strong current. The guide usually has to do only a few backstrokes to make the initial move. Rather than avoiding the guard wave in Suck Hole, the guide uses the power of this feature to arrest the momentum of the raft. As the stern catches the eddy line behind and to the right of the wave, the speed of the raft slows down, and the bow, which is still in the current, spins downstream. Now the raft is in a good position to start the back ferry. The guide is facing the object he or she needs to avoid and only has to pull a couple of times to keep the stern locked into the eddy, which lines the raft up for the weakest part of the hole. 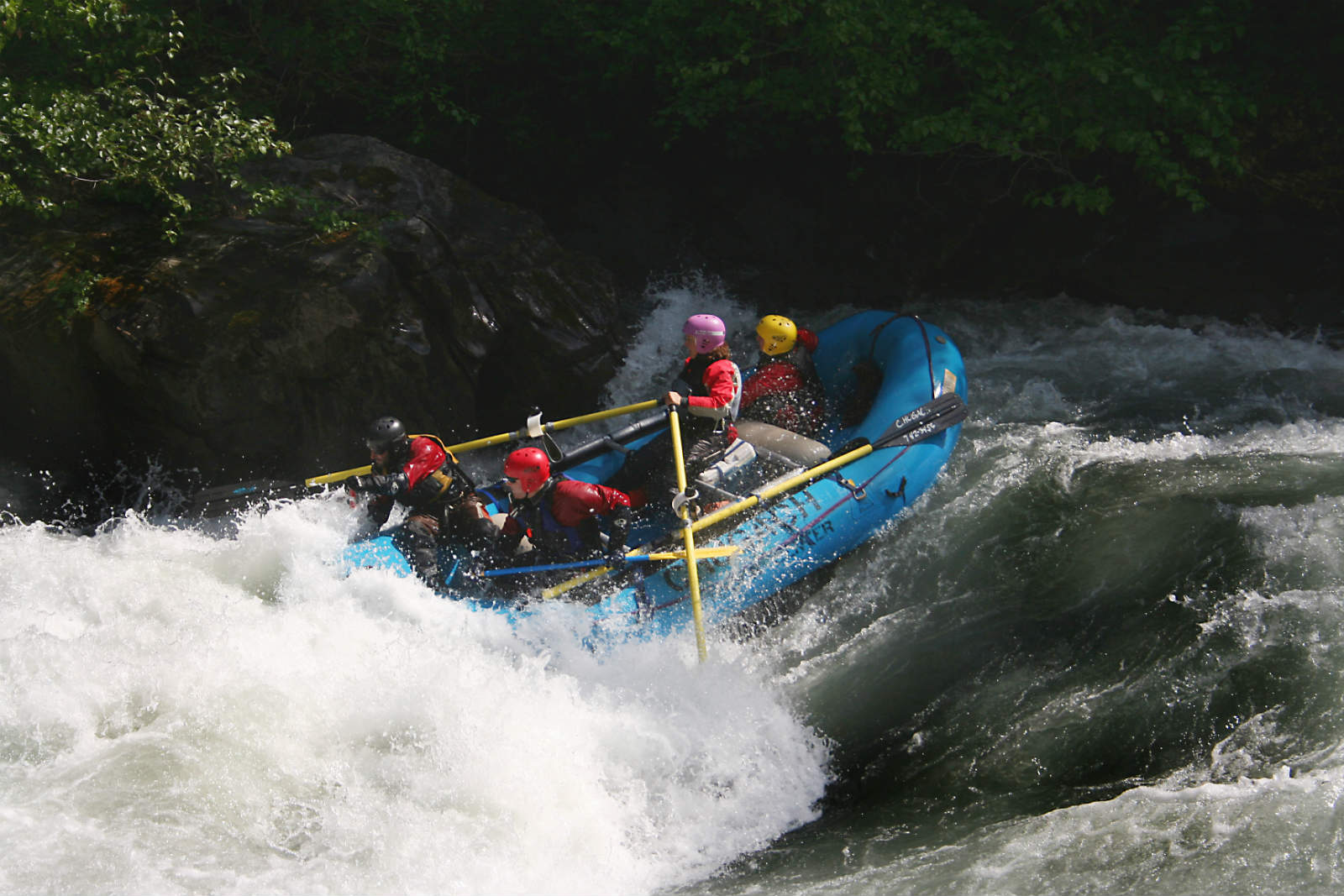 The benefits of the stern pivot reach far beyond rapids such as Suck Hole. When trying to catch eddies in fast current, turbulent boils can reject the raft and send it back into the main flow. Under such conditions, using a stern pivot with an oar rig has lots of advantages over the typical paddle raft method of driving into eddies bow first. Leading with the stern during the downstream ferry gives you extra pulling power for breaking into the eddy. And even if you get stalled on the eddy line after the spin, having the stern pivoted upstream means you can continue to pull on the oars until the raft is firm in the eddy.

The stern pivot also works well for rapids where all the current pours into a canyon wall. Enter the rapid slightly backwards pulling to the shallow shoals on the inside of the turn. Once the micro eddies and slower current spin the stern upstream, just keep pulling away from the wall, while minding your downstream oar as you skim across the shallow water. The beauty of this move is that now the current is helping you stay off the wall. Even if you can’t pull on the downstream oar because of rocks, just maintaining your angle with the upstream oar will allow the micro eddies to place you in position. 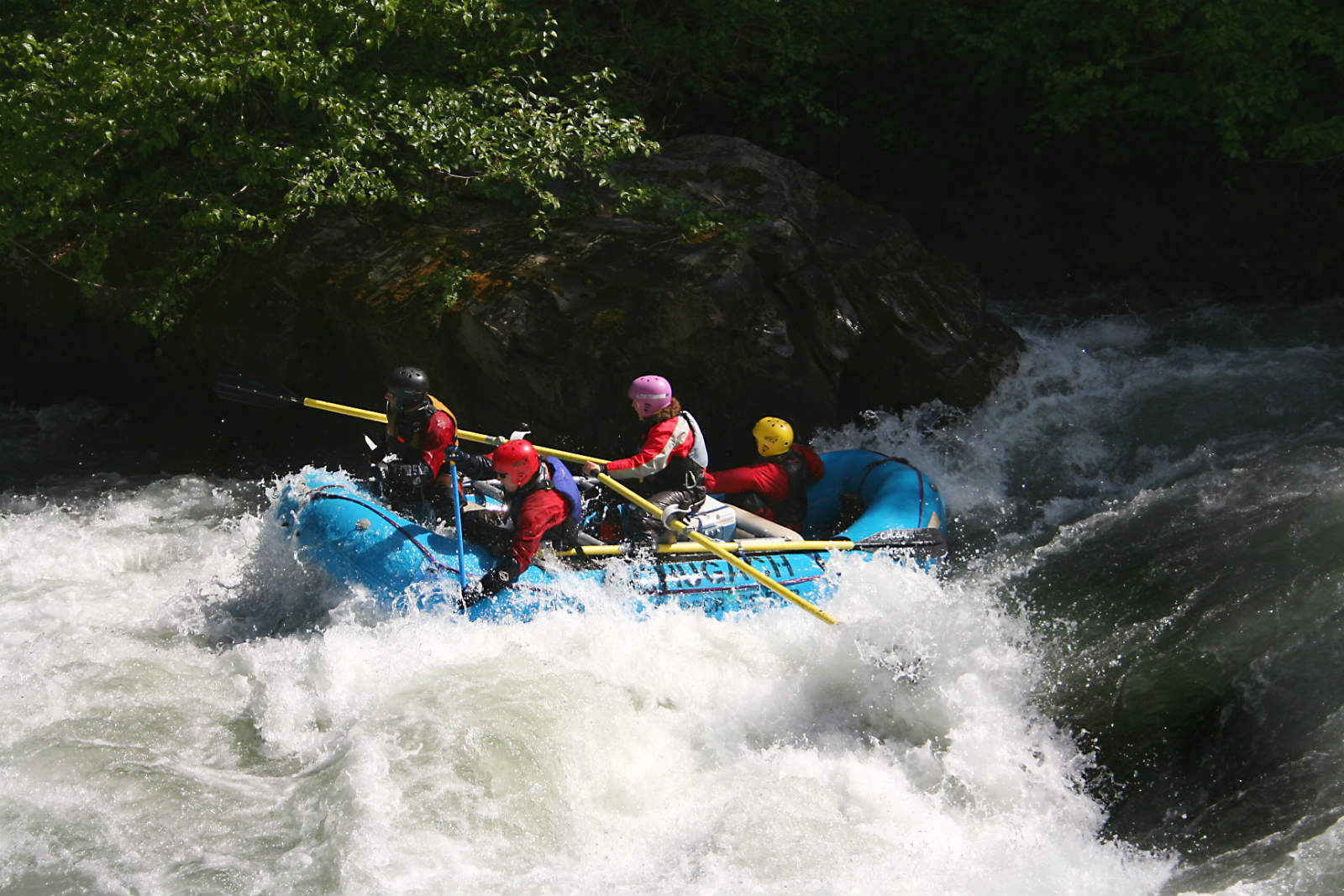 As you start trying the stern pivot in smaller rapids, you may find places where you don’t even have to pull toward the feature that will turn the raft. In these areas just drifting into the rapid sideways and dropping the back half of the raft over a small pour over or micro eddy will have enough stopping power to kill your speed, spin the bow downstream, and set up the back ferry.

The stern pivot is a true finesse move. Whether you are soloing a small cat in a tight creek or wrestling a big gear boat on a high volume river, you’ll be amazed at how effective the stern pivot can be for maneuvering your craft with so little effort. And that is the fun of learning the unique skills that coordinate with different kinds of boats. As you practice moves such as the stern pivot, you begin to rethink familiar rapids and better appreciate the diversity of currents that makeup a river. 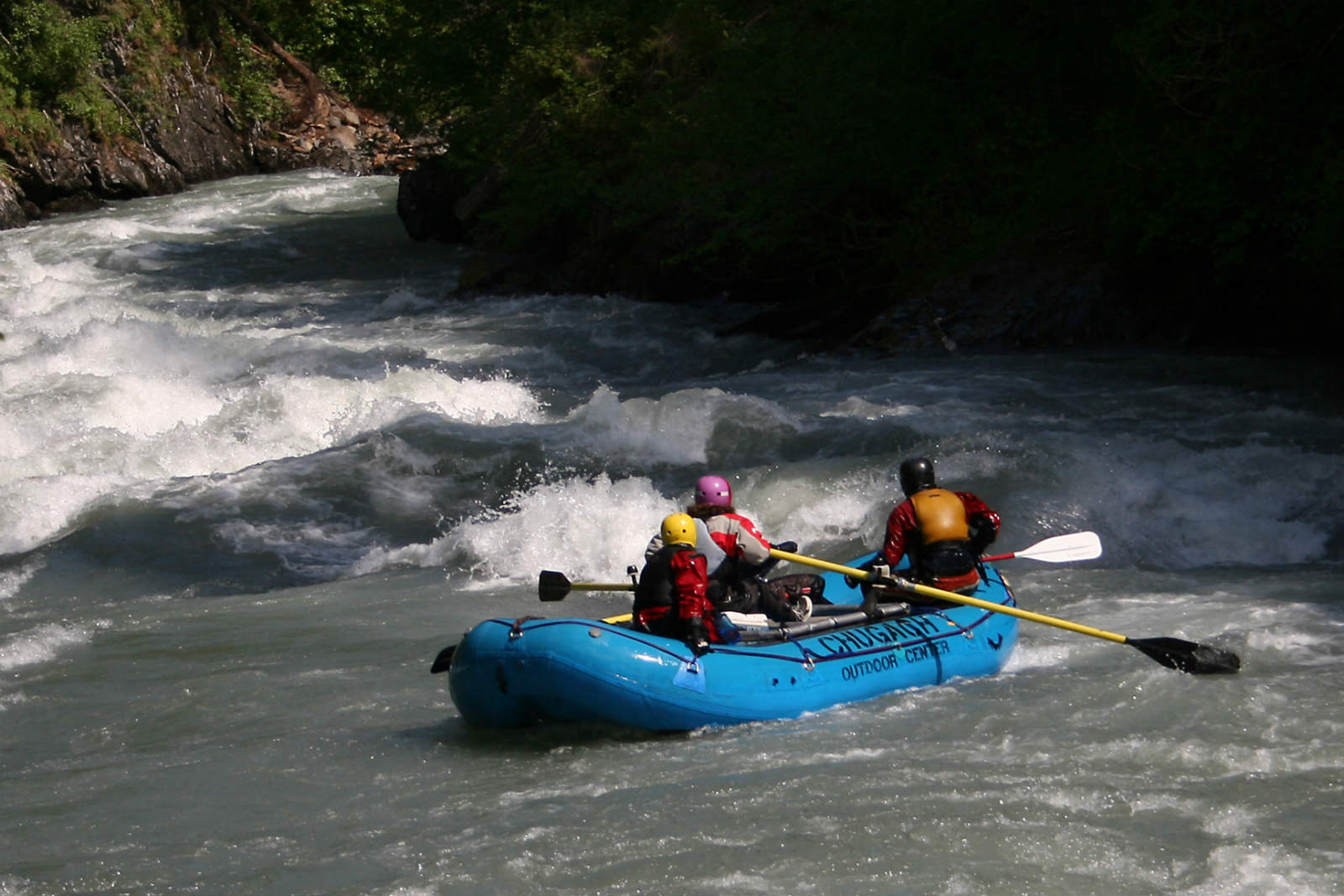