From the Hoh to the Clearwater: A Love Story

It was love at first sight. And no, it wasn’t a girl. The previous morning I had boarded a flight from my hometown of Grand Rapids, Michigan, and after one quick layover, I was meeting up with my friend Chad Becker at SeaTac. We were bound for Washington’s Olympic Peninsula in search of wild winter steelhead.

It was the middle of January, and with Seattle traffic behind us, we were soon encased in darkness. We drove for several hours until we reached the Hoh River drainage. How or why we had chosen the Hoh River was a mystery, even to us. In selecting this trip destination I had done minimal Internet research and only looked at a map or two. Essentially, I had no knowledge of the area, the fish, or the place. We knew it was a temperate rainforest though, so driving up river in complete darkness and falling rain was not completely unexpected. The rain dampened roads and moss covered old growth drowned out all available light. At one point, we had to pull over and make sure the headlights on the rental car were working properly. 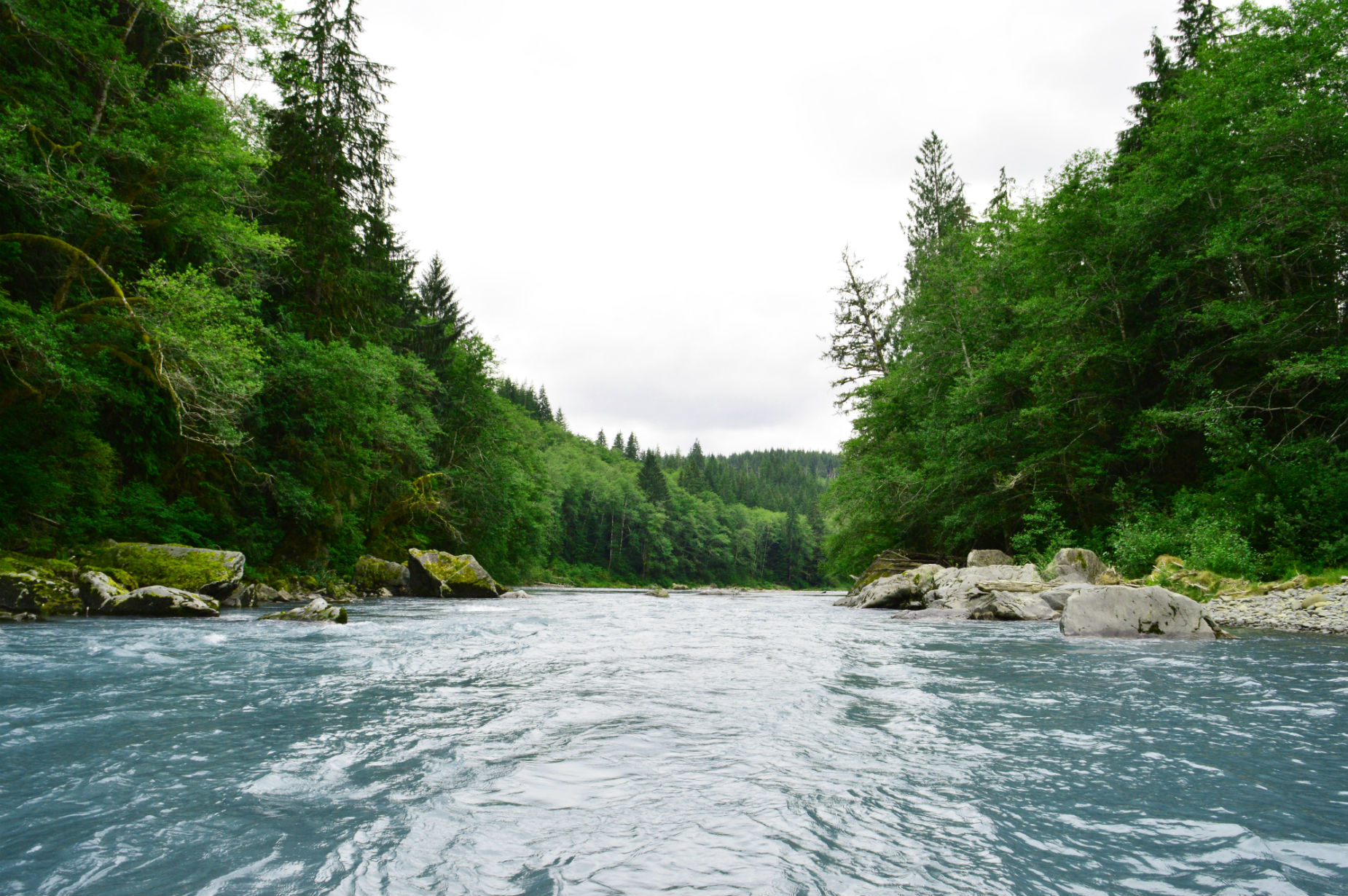 We set camp using the car’s high beams piercing through the pouring rain. No matter, we celebrated our arrival with a beer before turning in, excited with anticipation of the unknown that would come in the morning.

We woke at dawn. Coffee was made quick and we wadered-up, not wasting any time. Only problem was we didn’t know where we were going exactly. As soon as there was enough light to see we drove to the first available parking spot that appeared to have a trail to the river. Walking out onto that first gravel bar, there she was. My first love. The Hoh River. The rain had stopped, and the sun was beginning to crack through the mist. Moss clung to trees with trunks wider than cars. It was far from anything a couple of Midwest boys could ever have imagined. There were even fresh (very fresh) cougar tracks tracing across the wet sand. This place was wild beyond belief. 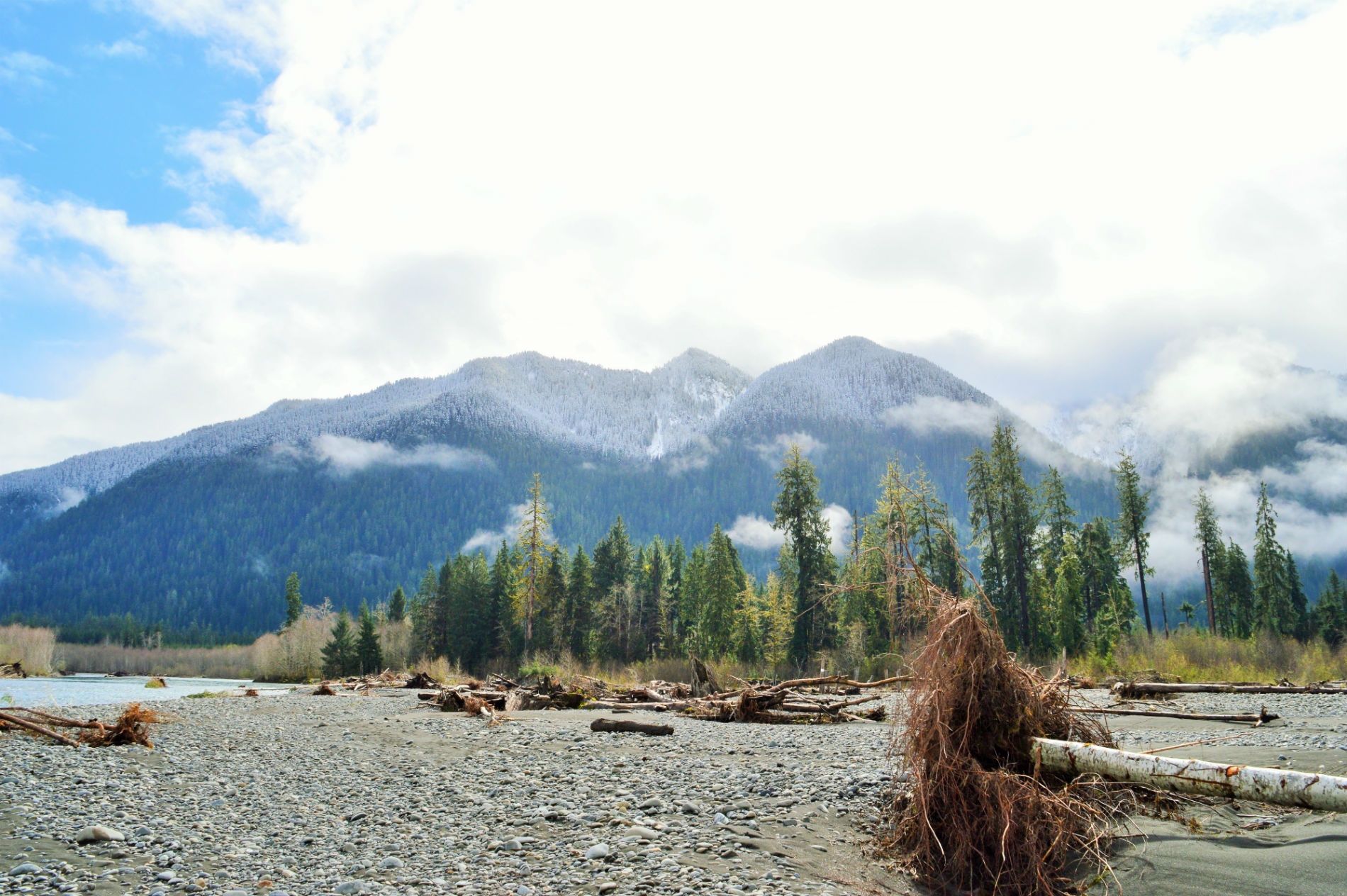 I enjoy seeing new country, exploring new rivers, and crossing off different corners of the map. Most have come and gone as fond memories, but nothing more. A very rare few, however, have utterly and completely grabbed hold of me. From that first sunrise, this place was one of them. I was entranced.

For four days we fished through every conceivable type of rain. Mist, drizzle, steady rain, heavier rain, and rain so frickin’ heavy that double rain jackets couldn’t keep you dry. And we hadn’t seen a sign of a steelhead. Not a pluck, a grab, or prayer had touched our flies. Now, I should mention here, while we didn’t have a clue about where we were, we weren’t complete idiots when it came to steelheading. We had both been chasing these fish in the Great Lakes for decades and at least held onto the illusion that we were up to this challenge.

For those unfamiliar with our pursuit, we were armed with double-hand fly rods (Spey Rods) and were using a specialized and centuries-old casting technique called Spey casting which originated on a like-named river in Scotland. Flies are cast across the current and then swung into shore below you. After each cast a couple of steps are taken downriver, covering each likely looking piece of water methodically. Other steelhead fishing methods drift a heavily weighted bait or fly down right on the fish’s nose. With Spey casting we hope an aggressive fish will move for our fly. Basically, to the swung fly angler it’s all about the challenge, tradition, and a whole lot of faith that eventually you will be rewarded. 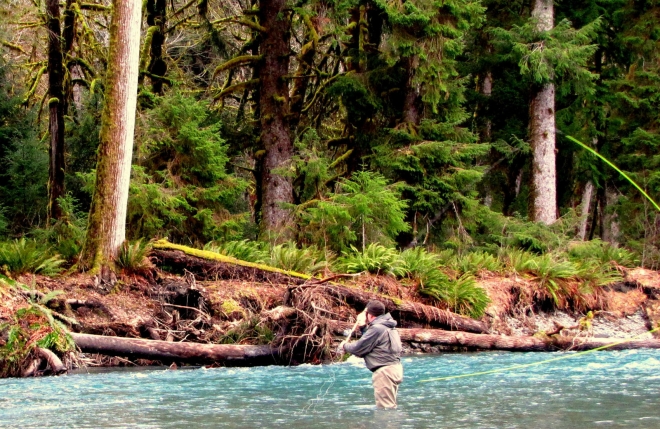 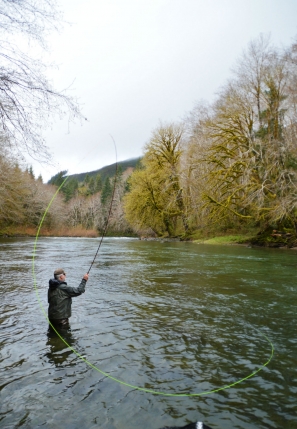 Steelheading is never a numbers game regardless of method or equipment but even less so with a swung fly. In a foreign place, we each were hoping to catch a single fish during the week-long trip. Nevertheless, after four 10-hour days of cast after cast, we began to lose faith. On day five though, Chad struck gold and found his first wild Olympic Peninsula steelhead, covered in sea-lice and straight from the ocean. His goal accomplished, it was my turn. Re-fueled with hope, I kept after it but after another fish-less day and a half, doubt had a full grasp. We had one afternoon and the next morning left to fish. My experience told me dire situations like these rarely work out.

Mindlessly going through the motions, working my way down a new spot, everything changed. The water was way too deep and way too fast. My fly was swinging across the heavy current just under the surface (in winter, you want the fly deep and slow) when I felt a pluck and then a surge of weight. Now, when you’re 50 hours in without a bite it doesn’t seem real, like a mirage in the Sahara. But this one was real. Real beyond my wildest imagination. To this day, the biggest tail I have ever seen on a steelhead (I’ve since caught a couple close to 20 pounds) came out of the water, line peeled off my reel, and then it was gone. As fast as it had come, the fly had come unbuttoned and it was over. It was like stealing a kiss from the most beautiful girl you’ve ever seen only to watch her walk away forever. The hook was set and I was desperately, heartbreakingly in love with this place. 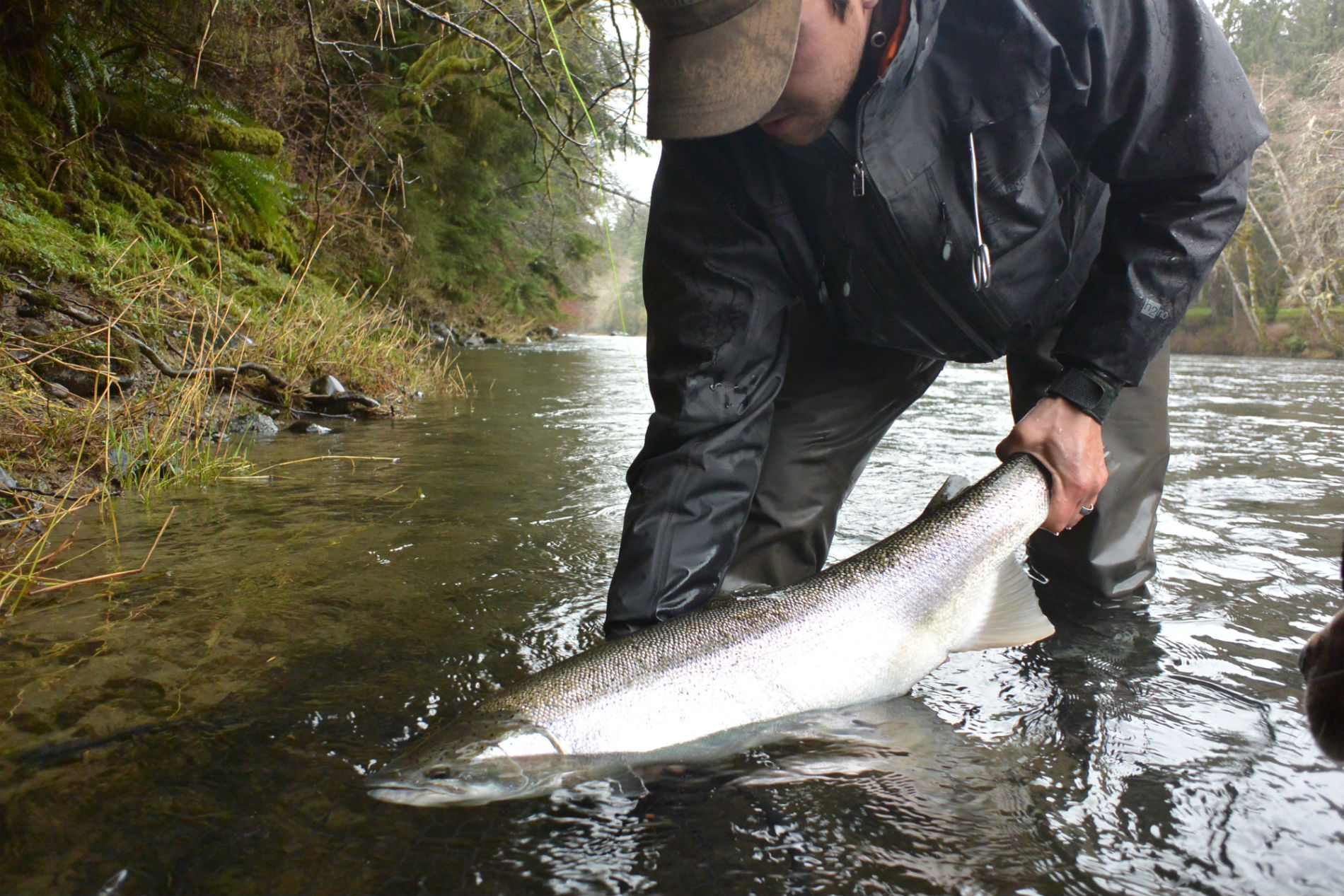 That was January. I went home to Michigan and I couldn’t sleep for days. I spent my hours awake, dreaming of that fish. I had to get back. So I took a long weekend off work and returned in April. After four more fishless days and nearing total despair, I caught two on back-to-back casts in the last hour of the trip.

Game over, there was no turning back. I went home saved hard for a few months and by the following fall had quit my job, packed my truck, and headed west. I knew I would be in the rainforest that January but I knew little else. Feeling like I needed some excuse for what I was doing, I built a website and started a guide service. Looking back on this time of my life, I’m struck by how bold this plan really was.

That first winter was surreal as I explored mile after mile of new water. I found a shack to rent next to the river, set up shop and went fishing. Day after day, cast after cast. Thankfully, the fish proved much more plentiful than they had on that original trip. My love for the rainforest deepened. 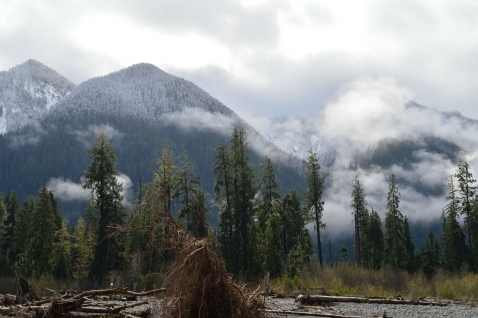 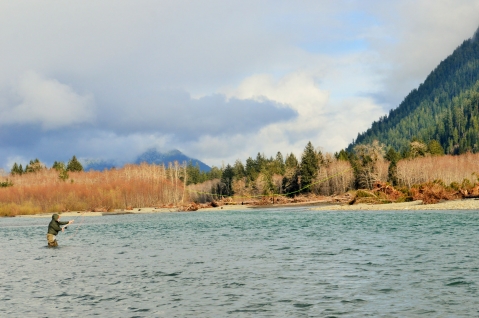 Somehow I made it through the winter without running out of money and into another season the following winter. But, as I spent more of my time there I felt that so much had changed. The courting period of our relationship was over. Suddenly, the river seemed more crowded, the trees not as green, the water not as blue. The rain sucked. Year three was even more crowded. By year four, I was disenchanted. The crowds had seemingly doubled every year since I had started coming. I had no desire to even fish myself, let alone guide clients. It was work. By year five, I told a good friend and client that the Hoh River was dead to me.

Steelheading to me has always been a mystical pursuit requiring solitude. Not a social gathering like other forms of fishing may be, it’s meant to be experienced on the edges of civilization among the trees, birds, wind and rain. Not only that, the swung fly game I love requires it. We are searching for an unmolested and aggressive fish, not one that has been hit on the head with a lead weight and a hunk of eggs. To have even a slight chance at success, you need an opportunity to fish water that hasn’t been pounded all day. 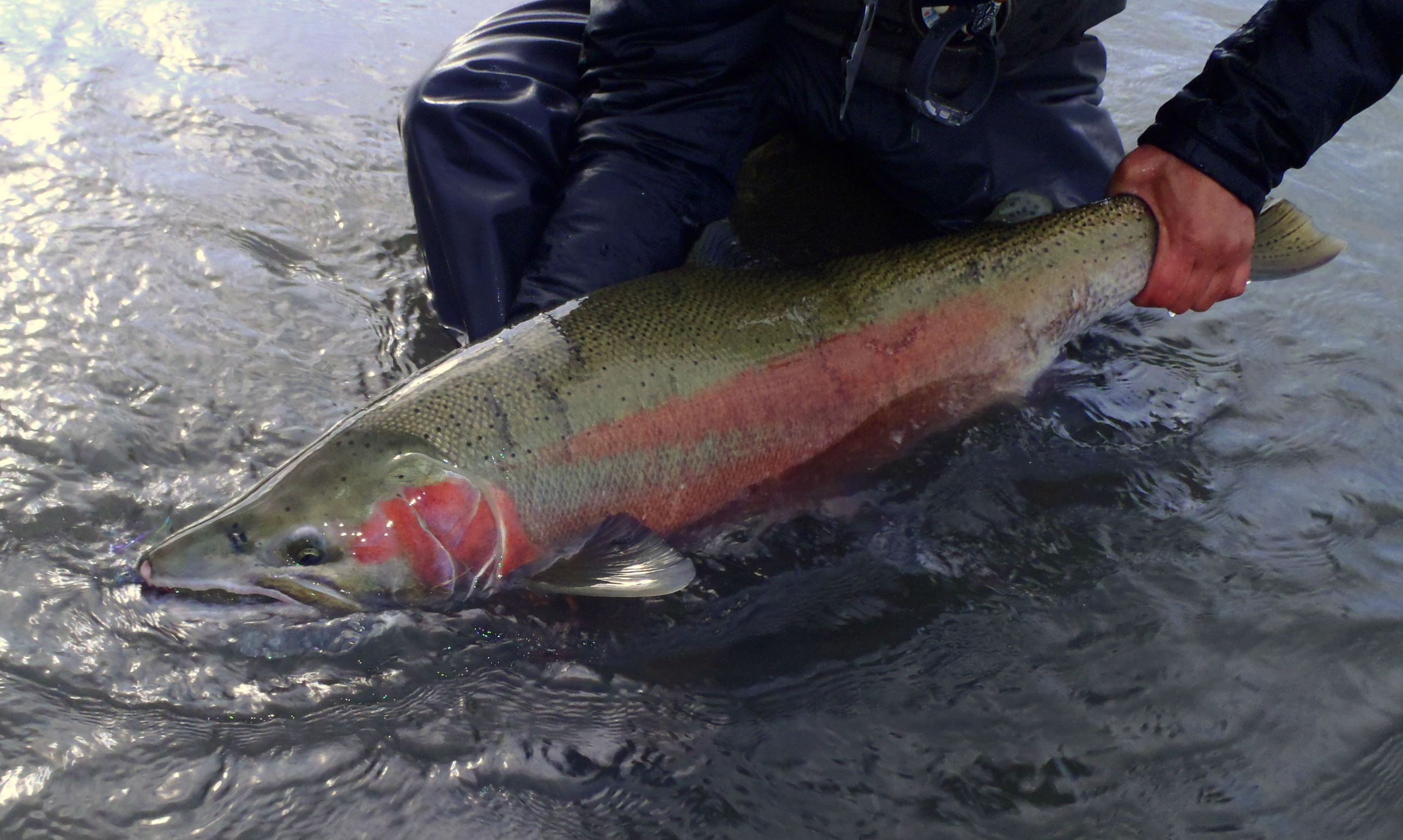 The crowds had taken that all from me. I felt incomplete. I had built my new life around this place, having left the past one far behind. Had my original perception of this place been mistaken? The initial awe worn off to leave behind its true colors? Or had things changed that much in such a short time? I didn’t know and couldn’t dwell on it, but it was time to move on.

As the crowds slowly snuffed the remaining embers of my love for the Hoh, a new love had entered my world, this time in the form of a woman (who later became my wife). When she had a job opportunity at Washington State University, we picked up and moved 10 hours away from the dead waters of the rainforest to the Palouse, where I fell in love yet again. The arid canyon of the Clearwater River was a far cry from the rainforest but I found it no less mystical. I had a new home and new love. 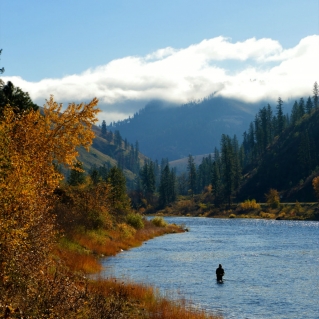 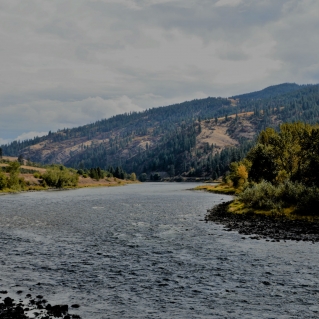 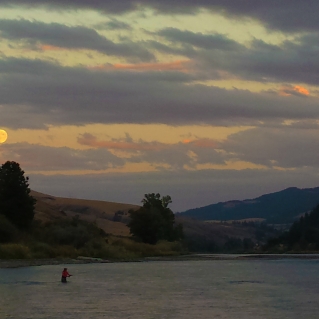 I returned the next couple of winters to guide in the rainforest but was merely going through the motions. It’s a sad state of affairs when trees with trunks wider than your truck no longer merit a second glance. All I could do each day of guiding was look forward to the opportunity to rush back east. Eventually though, something unexpected happened. It took some time, but I began to see things in a new light.

I found the inspiration to explore new corners of the rainforest, to search harder and deeper for solitude, the moment a friend and I purchased packrafts. We hiked deep into the headwaters of Olympic National Park using the packrafts to ferry across the river and then do short float trips around our spike camp. The weather was nostalgically miserable. Our sleeping bags were soaked and I had skimped on clothing to make room for the essentials (fishing gear). We were having a blast. The rafts allowed us to find seclusion on a steelhead river again. And with that, my perception began to change.

Following that trip, I continued to dig deeper for new ways to find solitude. I hiked farther into the forest and found new places— inaccessible to most—to launch my lightweight raft. And once again, every bend in the river felt unknown and exciting. The trees were greener and the water as blue as that very first trip so many years prior. I was in love again. 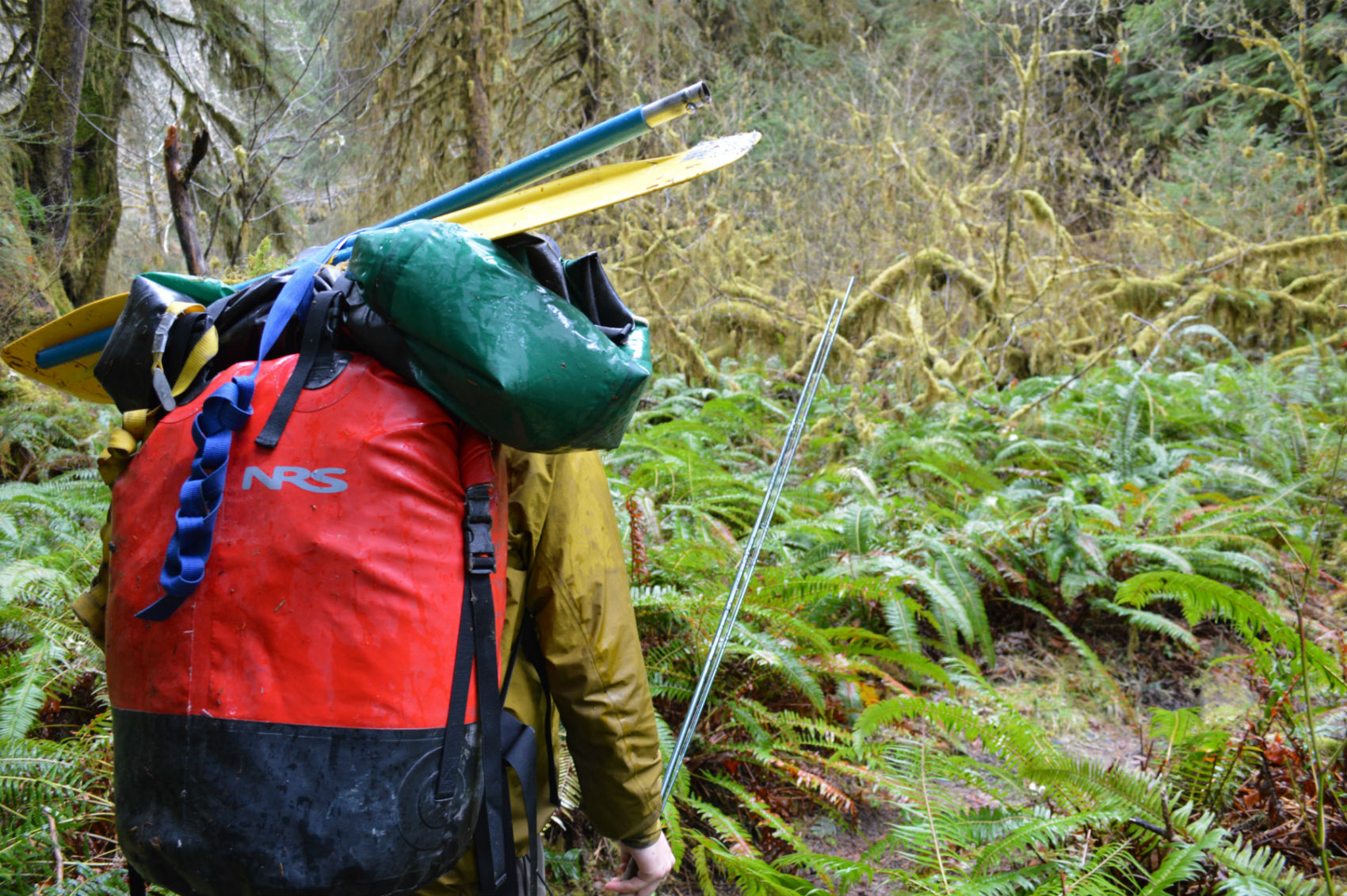 As I camp this minute on the banks of the Hoh River with my wife in the summer paradise that is the Olympic Peninsula, I’m reading The Heart of the World by Ian Baker. Ian references another text, Talbot Mundy’s Om: The Secret of Ahbor Valley in saying:

“For that which men have uncovered and explained…they despise. But that which they discern, although its underlying essence is concealed from them, they wonder at and worship.”

It occurs to me that maybe it’s inevitable to tire of any place after a time if always viewed through the same lens, and that the key to long lasting love of a place is to keep exploring both old and new with a new perspective.