I’m biking through the old city streets of Europe. Baguette in my bag and hundred-year-old buildings around me, I feel like I’m living the stereotypical European vacation. The only difference between my holiday and scenes from a cliché Hollywood movie is that instead of a classic cruiser bike with a wide seat, I’m cruising on a rusty, red mountain bike with squealing brakes. The stick of fresh bread is stuffed into my backpack, not nicely nestled in a wicker bike basket. And it snapped in half when I took a sharp corner. I’m whipping downhill from the narrow streets of Kobarid, Slovenia where the flowerpot-lined streets are just wide enough for 1.5 cars. I roll out of the small, tourism-driven town nestled beside the Soča River, deep in the Julian Alps, and the gradient picks up as I zip across the historic Napoleon Bridge that spans the Soča, 22 meters above the aquamarine water. It’s as if I’m cycling through a postcard. 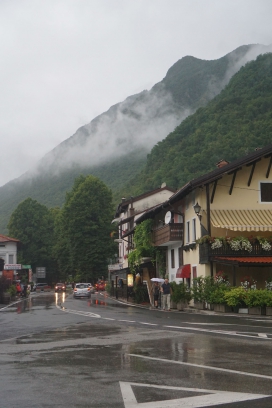 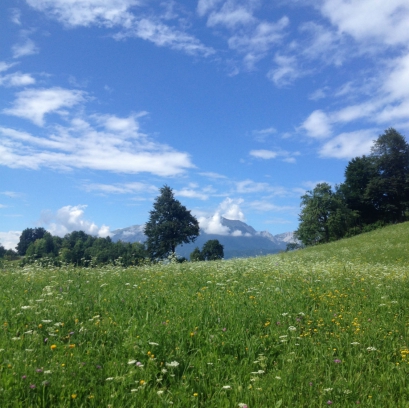 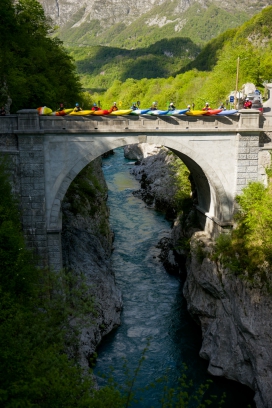 I coast down the mixed cobblestone road to Kamp Koren, Soča’s prettiest riverside campground. The rumbling river can be heard as I drop off the local eggs, fresh veggies and mangled baguette, immediately tying my kayak onto the car. This is my version of a European vacation, a simpler Hollywood rendition. Simple times: kayaking, food, friends and beer. Slovenia is a destination where paddling gear seldom dries, beers are always cold and no matter where you are in the country, the landscape and rivers are simply stunning. 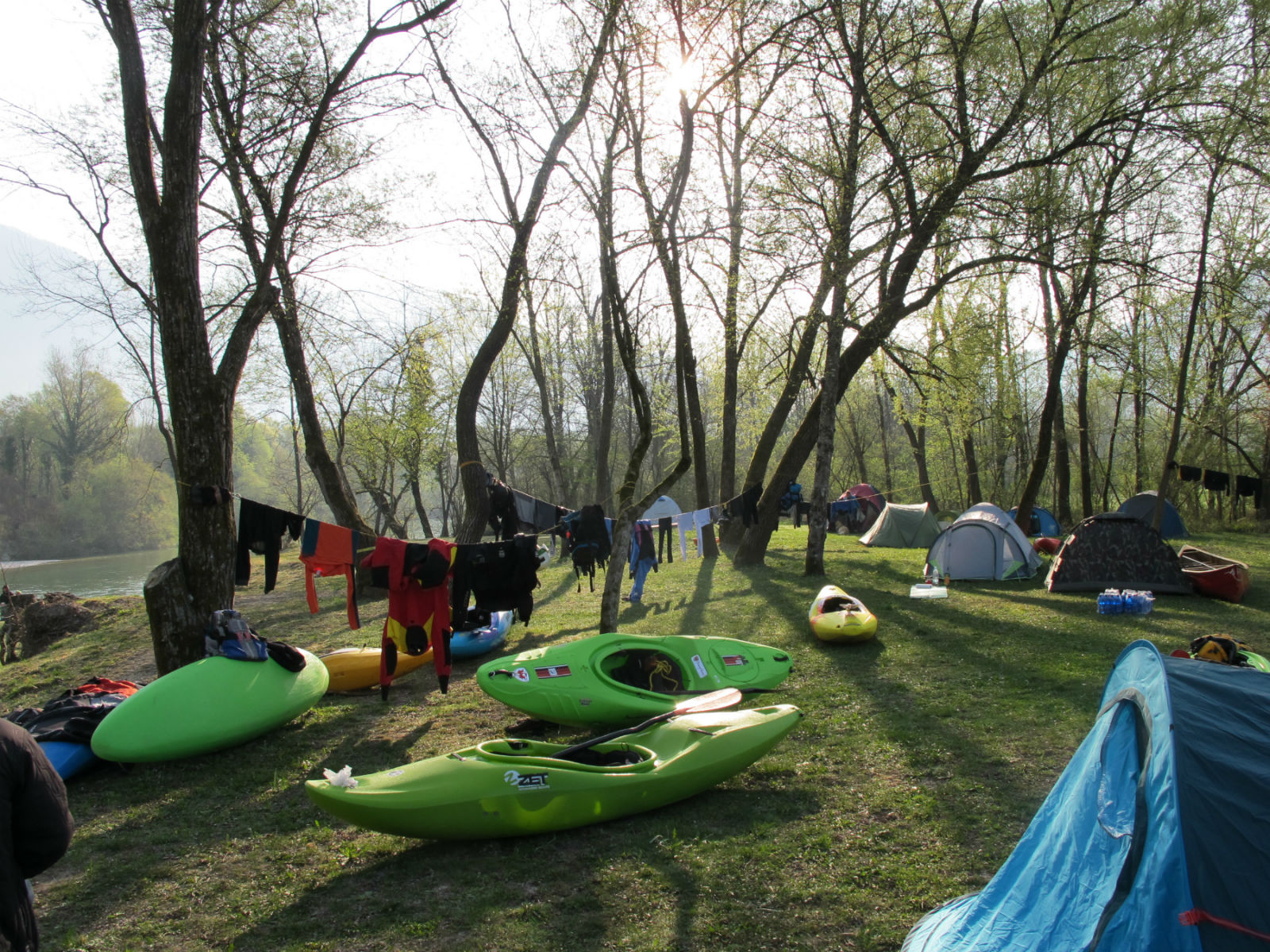 Mention ‘Slovenia’ to any European kayaker, and ‘Soča’ will be the next word rolling off their tongue. I’m lucky to be visiting friends in this area of western Slovenia for the third time. I met this crew of kayakers last October when I first visited the Soča Valley and then again in March when I paddled the Soča from source to sea as a part of the Balkan Rivers Tour 2, raising awareness about the potential construction of small hydro power plants on the upper Soča and Učja. This river is an alpine gem, a paddlers’ paradise and a place you could visit again and again in every season and still not fully experience its adventure.

With boats on the roof, we drive to the put in, down a winding road snaking along the river, a few hundred meters above the canyon. Through the trees I can see intermittent views of the towering green and gray Julian Alps and it’s hard to comprehend the scope of this valley, with peaks reaching 7000–9000 feet. Mountain bike and hiking trails wind up and down the mountains surrounding the Soča. On cloudless days, the faint outline of paragliders can be seen above the mountain ridges, their bodies tiny specks beneath the brightly colored kites. And if that’s not enticing there’s canyoning, climbing and rafting to be had. 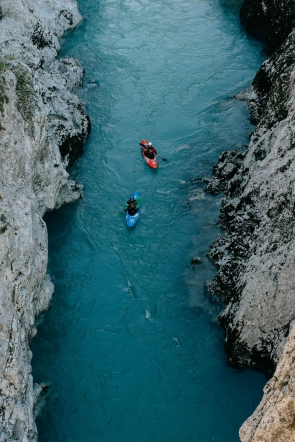 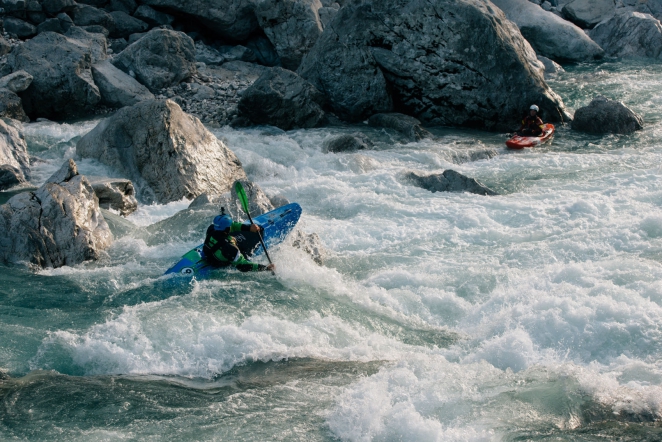 The source of the Soča is located just west of Triglav, the highest peak in Slovenia, and flows from 2,874 feet in the Julian Alps, to the Adriatic Sea in Italy. As I found out this spring, the Soča can be paddled from source to sea—that is, if the seven hydro dams along its course provide enough water, and if you’re willing to portage around these ‘obstacles.’ The most popular area for whitewater on the “Emerald River” has three main segments: the commercially rafted upper section, the middle, class V ‘Cataract’ and Otona, the final, more continuous whitewater section.

It’s high summer mayhem at the put in, with rafting companies from Italy, Germany, Czech Republic, Hungary, Austria and Slovenia weaving around paddlers and kayak clinics. Part of what makes the Soča so inviting—aside from the crazy clear, aqua water—is that it has pieces of whitewater for every level of kayaker. Stretches vary from class I-V with multiple put in and take-outs along the river making it easy to select a section that suits your ability. A permit is required to paddle the river and can be obtained in the many campgrounds, tourist offices or gear rental shops for 2.50€ for the day or 10€ for the week.

On the water, I’m gliding over multi-colored rounded river stones, with mountains stretching up above me. Water levels are low, typical of mid-July, running around 10 cumecs, but it’s not uncommon for the river to rise by 50 cumecs following intense summer rainstorms. This first section of class III whitewater is broken into two characteristically different segments. The first spans from the small town of Srpenica to Trnovo. This section is called Ženska, meaning ‘Women’s Section,’ a name that refers to the World Cup slalom canoe and kayak races held here in the 90s, back when sleek, carbon boats and hanging gates were common on wild rivers of Europe, not confined to the artificial course of today. “They didn’t need to use many gates,” one of my friends explains to me, “because there were so many rocks that dictated the course.”

Eddy hopping and working on my boof, the Soča is a river running playground. Enjoying the mellow mood that the low water yields, my friends point out siphons that at higher water create more urgency and attention. I’m more of a playboater than a river runner, but the Soča provides a mix of challenging whitewater just big enough to be fun, but not too big or intimidating. The Mosška section, or ‘Men’s Section,’ follows downstream of the Trnovo hanging bridge, which becomes steeper, more difficult and more compact. I can feel the gradient changing and the water speed picking up as the river starts to canyon in. This is my favorite part of the river, albeit short, with continuous read and run rapids without the commitment and hazards of Cataract. A challenge and a treat. But make sure you take out at the fallen bridge ruins that mark the entrance to the gorge.

‘Cataract’ is characterized by a faster change in gradient and gorge-like geography where the emerald water clashes with massive hundred ton, almost-white limestone rocks creating tight lines, many siphons and multiple pool drop segments. This is the stretch of water that Slovenian kayakers are known for and easily one of the most special river stretches and well-known rapids in Europe.

I take out before Cataract, and drive to the parking lot/put in of Otona. The hike down to the water is a tangible reminder of just how steep and deep the Soča gorge is. The switch-backed trail descends 200 vertical meters over crumbling gray limestone rocks, and down the 400 wooden and stone steps. The large pool at the bottom is rimmed by gravel beaches and gives the scene a vibe of a tropical paradise. 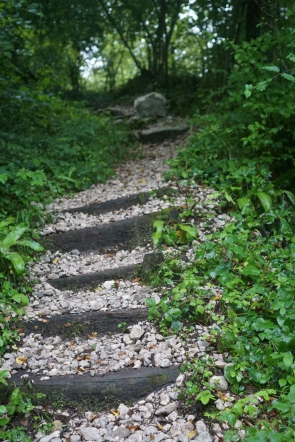 The color and spirit of this river have inspired poetry and art in Slovenia and former Yugoslavia. The surrounding mountains were the site of many harsh WWI battles and prior to the war acted as the border between Italy and the Austro-Hungarian Empire. Walking through the steep, dense forest, my mind wanders to these historic conflicts, and how lucky I am to be trekking along with a boat and not a weapon.

I hear hooting and yipping as my friends drop from the final boulder garden of Cataract, exchanging high fives. We paddle on, taking the first drop into Otona in quick succession. Otona hosts a more continuous section, with wave-holes to surf and some meatier but still friendly pool drops. We paddle right to Kamp Koren, where cold beers await. 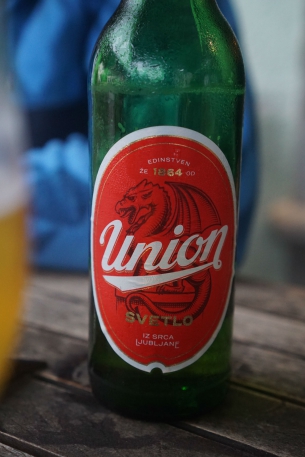 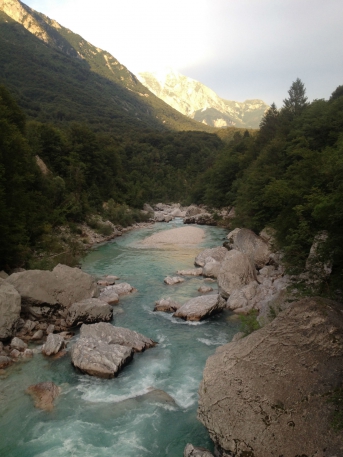 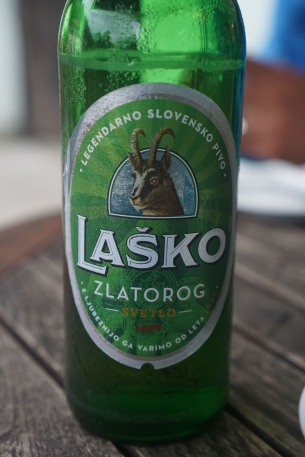 Logistics along the Soča are easy, especially when you’re camping at the take out. Even the beer choices are simple, where the half liter bottles or tall boy cans are decorated with the red dragon of Union or the green mountain goat of Laško, both fiercely Slovenian breweries founded in the 1800s. In Slovenian beer is Pivo, which may have been the first word I learned when I got here, quickly followed by Na zdravje (cheers), Hvala (thank you) and Kava (coffee). Simple priorities.

As we sip beers and dry gear, clouds start to roll in, blocking the view of the mountains, and the summer heat and humidity, which hasn’t lifted for days, seem to be generating a summer storm. Rain comes down in sheets, with drops so big they make bottle-cap-sized spots on the ground and the Soča turns a cloudy green, like the matte color of a robin’s egg. Thunder rumbles and cracks with a force you can feel in your chest. Soča laps tomorrow will be faster and beefier, and we all have our fingers crossed that this is a big enough storm to bring in another local run, the Nadiža River. 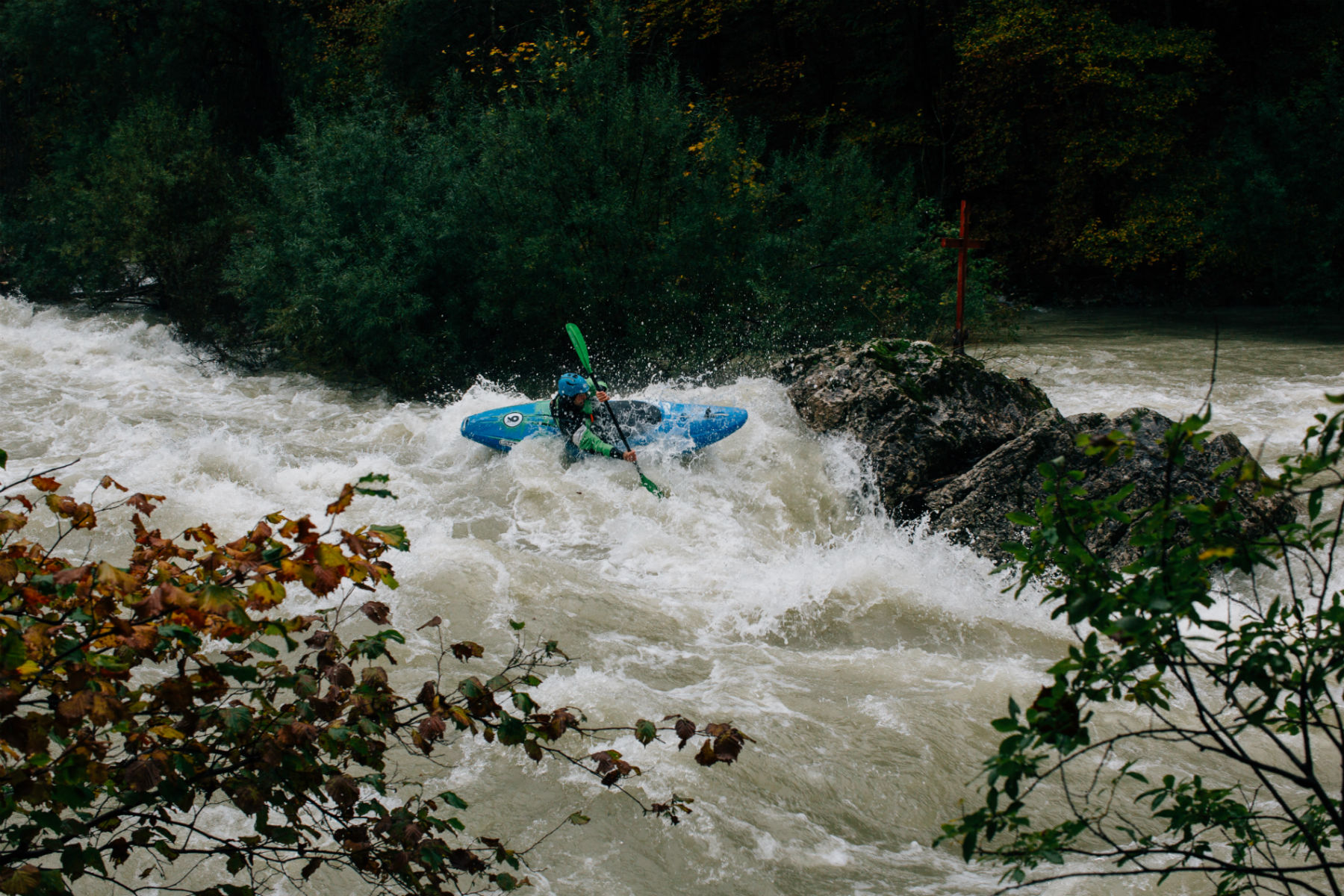 While most travel to Slovenia for sunny, summer Soča laps, the best water levels for more competent paddlers is spring and fall. Fall brings rain to Slovenia, raising the levels of rivers like the Nadiža to a runnable flow. On one of my previous trips, I was lucky to have the chance to run the Nadiža. A pearl of paddling in Slovenia, this river is a great intro to creeking, with pool drop rapids, continuous class III-IV rapids and two small box canyons. The shallow gorge hosts different rocks and a different color water than the Soča. Nadiža runs are rare, but it’s still worth a visit in low water when it’s a swimming paradise with 20 degree (Celsius) water and another historic bridge as the backdrop.

The Soča is by far the ‘golden child’ of Slovenian whitewater, but based on the local weather and season there are more rivers to discover as well as history and culture. 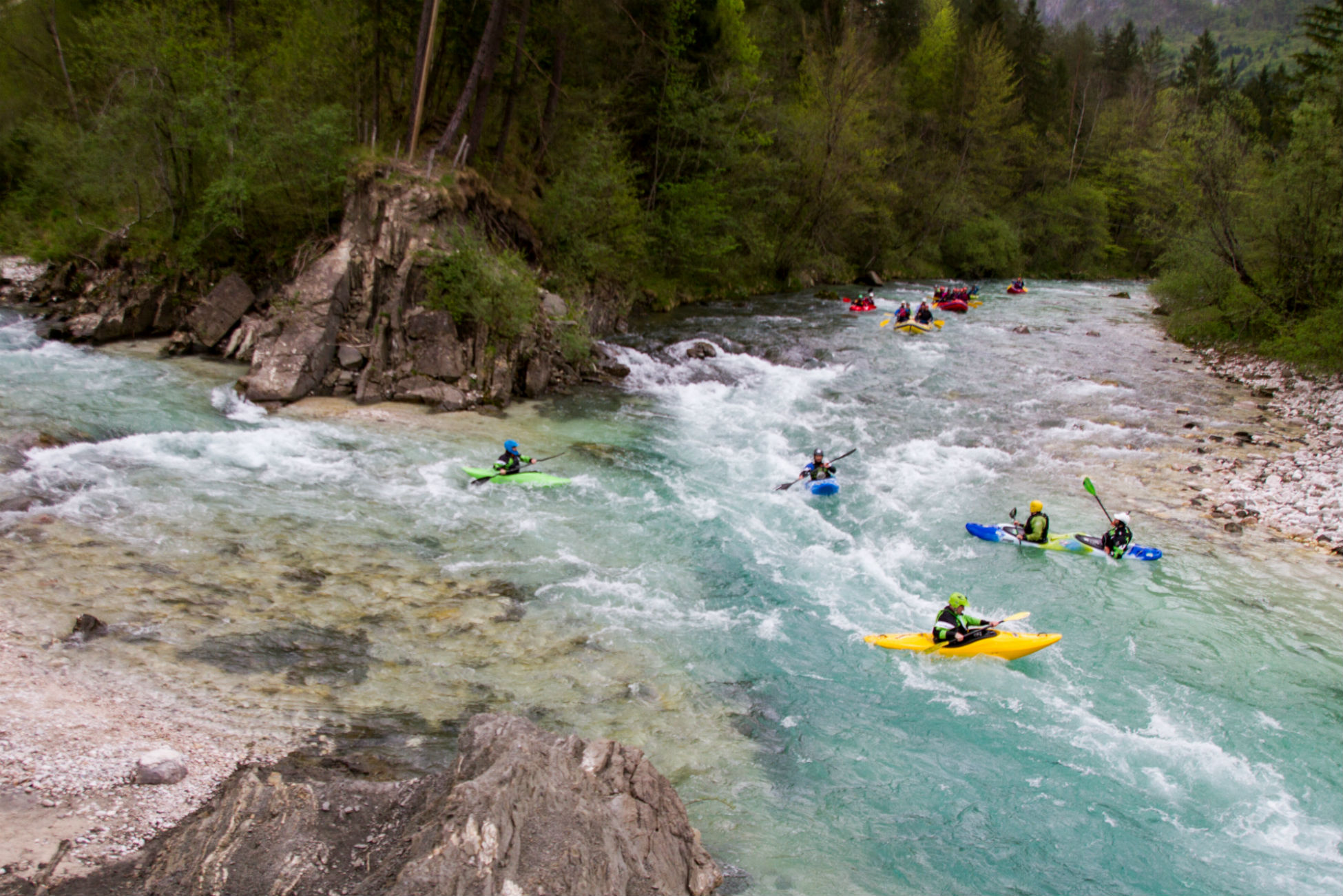 If water levels are low, the capital city of Ljubljana is worth a visit and only a two-hour drive from the Soča Valley. Slovenia is half the size of West Virginia, so compared to Canada, everything in Slovenia feels close. Yet, the varying geography and huge mountains give the country big personality. Ljubljana’s scenic old city follows the Ljubljanica River, cafes lining the cobblestone streets serve rich Turkish coffee and local desserts like kremšnita, a light and spongy pastry layered with sweet cream. The river winds through the city and feeds into the Sava River, which gains its mass from the Sava Dolinka and Sava Bohinjka with headwaters in northwestern Slovenia.

We put on the Sava Bohinjka River one evening, and even though water levels are low, we spent the last hour of sunlight drifting through the small canyon, massive three-foot plus Huchen ‘salmon’ swimming beneath our boats. In spring flood, this section of river can rise to 250 cumecs, creating a close-to-town run where the half hour, low water, class III paddle turns into a 10 minute, class V lap. 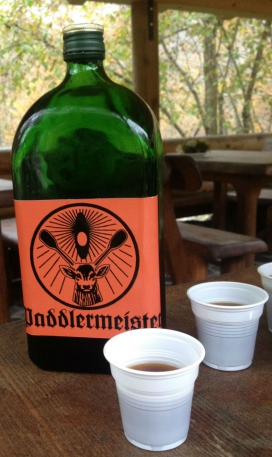 At the takeout, we drink Slivovitz from a flask. The plum liqueur is a sharp, strong drink typically sipped from small glasses, served in pubs, as a greeting for guests, and used for medicinal purposes. On our way through Radovljica we stop for piping hot burek, a Balkan pastry made of a flaky phyllo stuffed with meat or cheese. Breakfast lunch or dinner, burek is a staple for kayakers. When we return to camp, we sip homemade jagermeister made with 40 different wild herbs harvested in the forest by Soca local legend Skubine.

After a few weeks of warm weather and pretty paddling in Slovenia, I realize that I feel home here. With rocky mountains, dense forest, a seaside and ample whitewater, it’s as if all the best geography and characteristics of Canada have been crammed into one compact country. People are friendly and laid back, and proud to share their country, rivers, food and culture. When I try and organize meals or shuttle, I’m often reminded to “take it easy,” which seems to be a common Slovenian mantra and accompanying attitude. This is a land of whitewater and simplicity. Where it’s hard to leave and easy to return.