Knowledge is power. Wild & Scenic Wednesdays are just one way we’re hoping to spread knowledge in 2018 about our rivers. Since this year marks the 50th Anniversary of the Wild & Scenic Rivers Act, we’re sharing 5 fun facts about a new Wild & Scenic River each Wednesday throughout the year. The first set of rivers spans from Wisconsin to Wyoming, Utah to Oregon and California. Learn more about how you can celebrate the 50th Anniversary and help NRS, American Rivers, American Whitewater, OARS, Yeti, Chacos and REI fight for 5,000 more miles of designated Wild & Scenic rivers at 5000miles.org. 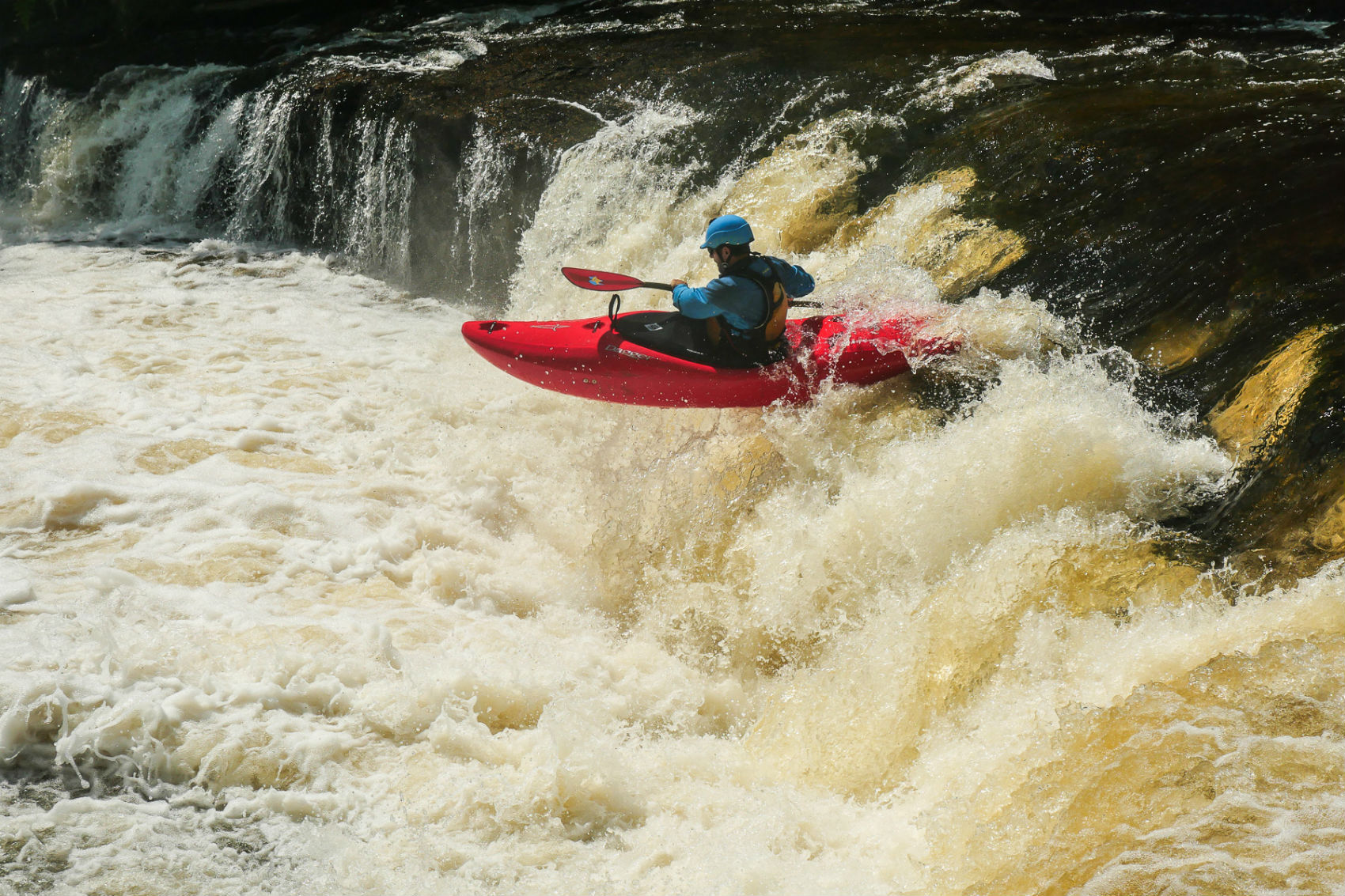 1. The Wolf River is part of the original eight rivers designated 50 years ago in 1968.

2. “Outstanding Remarkable Values” (ORVs) are the qualities found in each protected river that must be addressed in management plans. The Wolf River may be the only designated Wild & Scenic River to not have any ORVs identified.

3. Menominee Tribal lands completely encompass the Wild & Scenic portion of the Wolf River, making it the only river in the system to be completely managed by the tribes.

4. For many years, the Wolf River’s Wild & Scenic stretch was the only designated river that was off-limits to the public. The Menominee Tribe recently began allowing boaters to float the W&S Section IV with a permit which is sold by the tribe. The tribe also operates outfitted trips. The permit cost inspires paddlers to go slowly, lap rapids, and enjoy the river’s awesome whitewater for a whole day.

5. The granite bedrock seen along the river, most noticeably in the narrow canyon housing Lower Dells Rapid, is 150 million-year-old Wolf River Batholith. 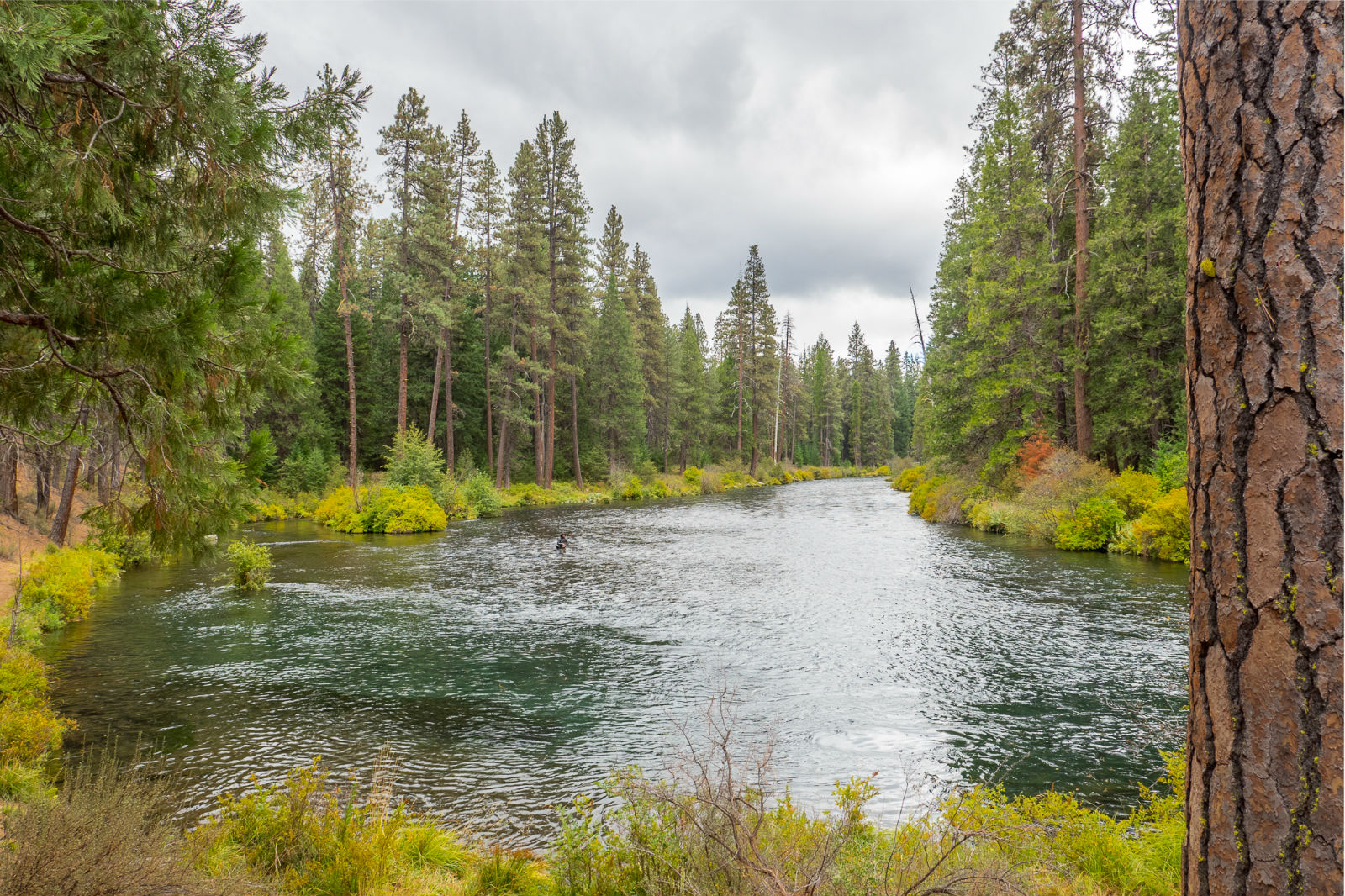 1. The source of the Metolius is often falsely attributed to aquifers in Black Butte, a small mountain peak that rises above the springs’ outlet. However, geologists believe the actual source originates in the Cascade Range to the west of the watershed. A fault line likely funnels the underground flow from these more distant peaks into the Metolius drainage basin and allows them to rise to the surface.

2. Just a half-mile upstream from the first put-in option at Riverside Campground, the Metolius river flows from a spring at a rate of 50,000 gallons per minute (roughly 110 cfs). By the take-out, tributaries contribute to the flow volume that maintains a steady 1,300 – 2,000 cfs throughout the year.

3. The Metolius joined fifty-two other rivers and tributaries in the single-largest river conservation legislation effort ever known. Oregon’s Omnibus Bill passed in 1988 and made Oregon the state with the most designated rivers in the national Wild & Scenic system.

4. Fly-fishermen covet the upper stretches of the Metolius’s populations of rainbow and bull trout. In an effort to maintain the resource, only barbless hooks can be used and all fish are catch-and-release. The Wizard Falls Fish Hatchery also raises kokanee salmon and mountain whitefish for fishermen.

5. The Metolius flows through the small town of Camp Sherman where a few hundred local residents burgeons into several thousand in the summer. “Town” consists of an elementary school, a post office, a general store and numerous recreation facilities like campgrounds and RV parks. 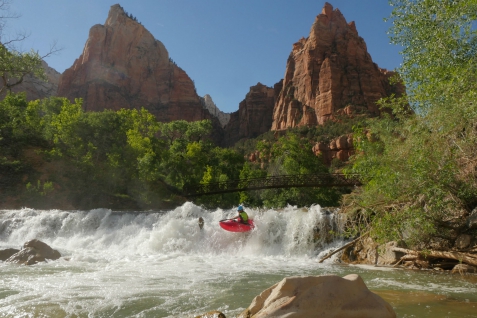 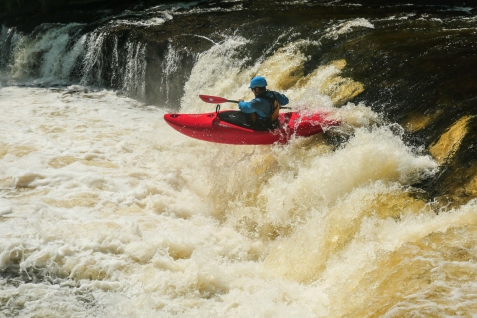 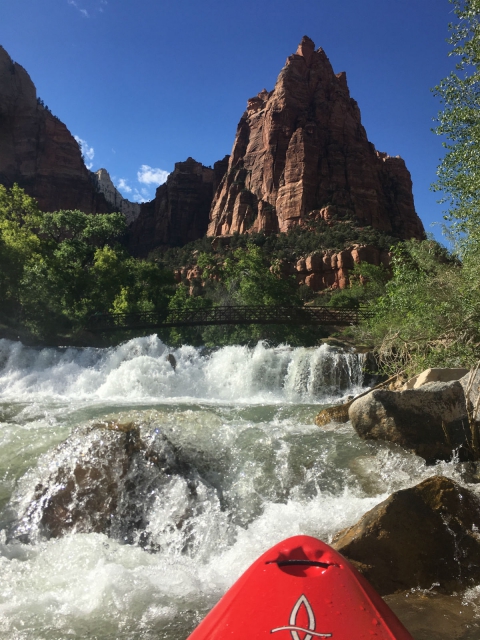 1. To float the Virgin, boaters must acquire a permit from the Zion National Park backcountry rangers.

2. Paddlers can only acquire said permit when river levels are between 150 – 700 cfs. It’s rumored this restriction went into place after groups of boaters had to be rescued out of the Narrows at higher flows.

3. The Virgin River and BLM Wilderness lands became one of the few new “watershed” designation approaches. Thirty-four small tributaries of the Virgin are included in the single “Virgin River” Wild & Scenic designation, many with their own set of Outstanding Remarkable Values.

4. The Virgin River is the only Wild & Scenic river in Utah, a state known for both its famous National Parks and spectacular public canyonlands—and current difficult political climate for land and water conservation action.

5. The “Narrows” of the Virgin River has long been hailed as one of the top hiking destinations in any National Park. For intrepid expedition paddlers, however, the Narrows can also be explored by paddling the rare monsoon or spring rain pulse flows. Hikers won’t venture into this slot canyon, leaving it solely for those boaters willing and able to take on the challenge of a remote and largely inaccessible class IV river trip. 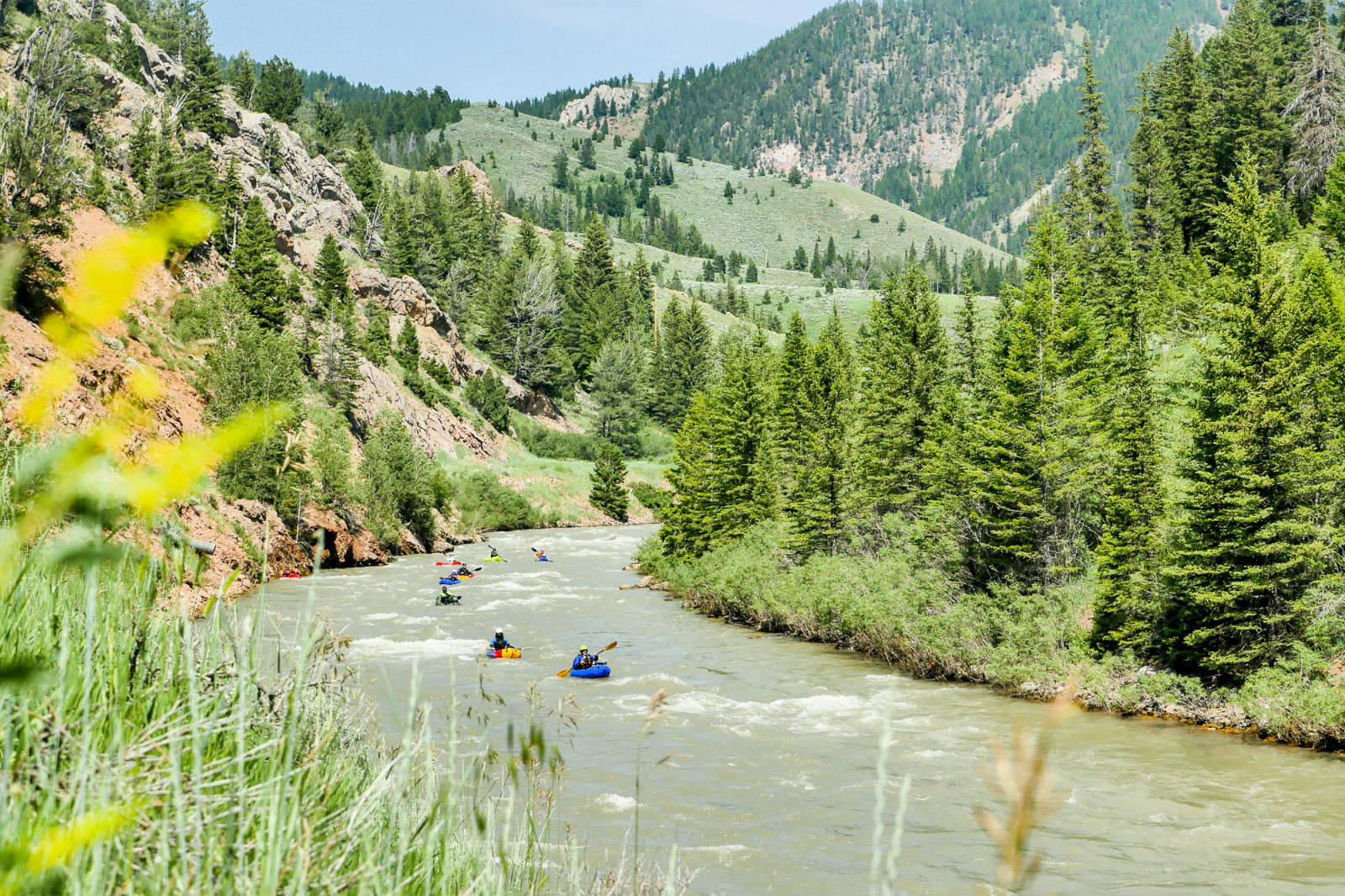 1. The single Snake River Headwaters designation actually includes thirteen separate tributaries, as well as sections of the main stem Snake River as it flows through and out of Teton and Yellowstone National Parks.

2. According to a local river conservationist and business owner, the health of riparian habitats and native fisheries with Snake River cutthroat, the water quality and cleanliness, and the presence of moose, elk, deer, black bear, river otters, beavers, and grizzly bears all contributed to the Upper Snake being recognized as “the best of the best of the best” for rivers in the lower 48.

3. ‘Recreation’ is one of the official Outstanding Remarkable Values identified in the Wild & Scenic status for the upper Snake River watershed. And yet, Yellowstone prohibits paddling as a form of non-motorized recreation, so paddling the Snake’s Wild & Scenic tributaries within Yellowstone is illegal.

4. Quantifying the impact of the region’s recreation economy helped local proponents show their state representatives the importance of protecting the free-flowing Snake River Headwaters. It would not be conservation for conservation sake. Wild & Scenic designation was essential to sustaining the livelihoods of local residents.

5. Beginning on W&S Granite Creek at the base of the Gros Ventre Mountains, it’s possible to experience three different designated rivers without getting out of your boat. Granite flows into the Hoback River and eventually leads into the great Snake River. Each river has a unique terrain and flow characteristic. 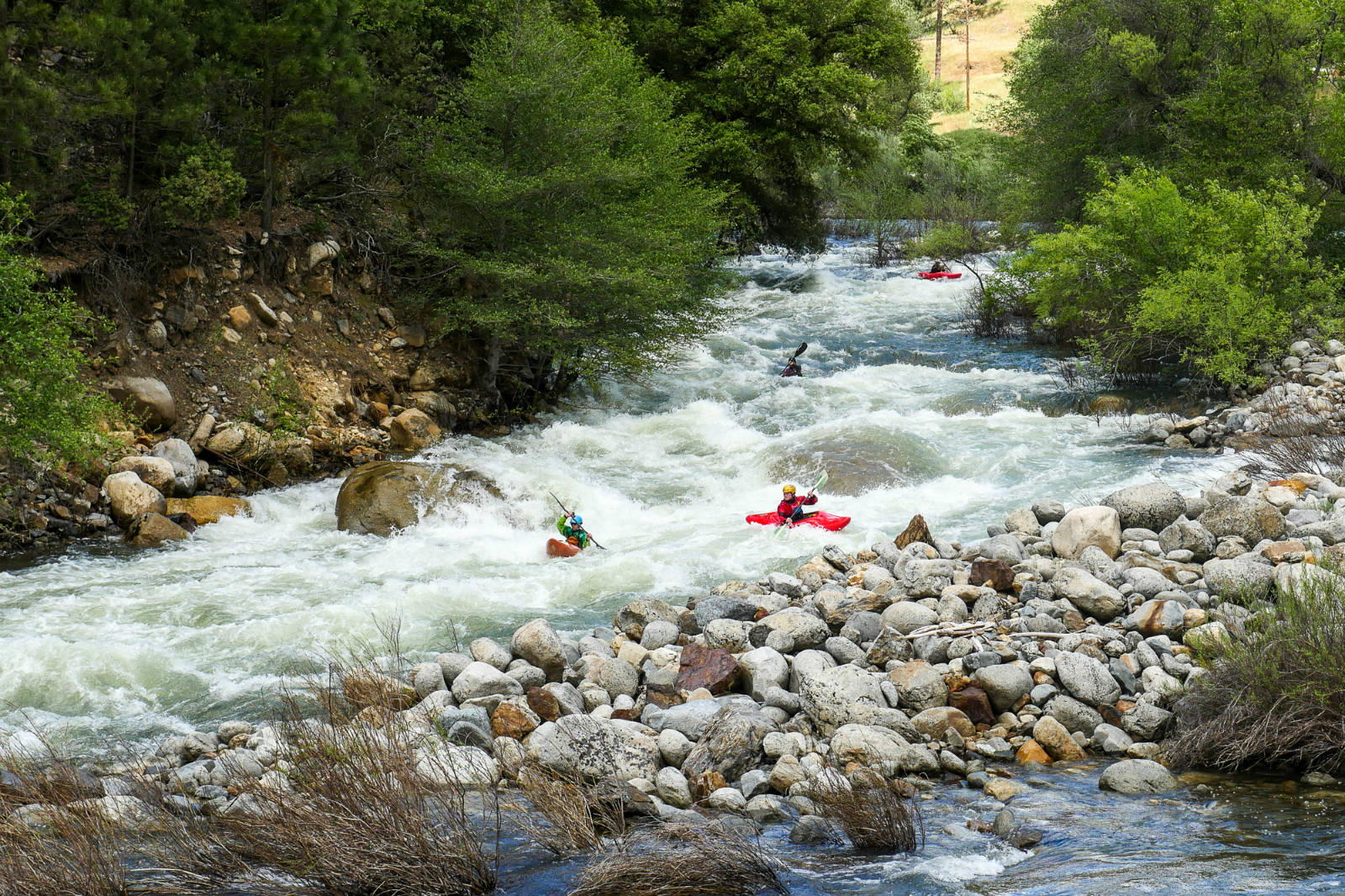 1. For many years Yosemite National Park didn’t consider boating as a legal form of recreation within the park. American Whitewater worked with the Park Service to study, evaluate, and open the river to recreational paddling on April 24, 2015. The current management plan considers “the river as a trail and the boat as a backpack.”

2. Priscilla Macy and Jacob Cruiser were one of the first crews to navigate the rapids and use the new permit system to gain access to the new wilderness experience. Sections of the Upper Merced river can be accessed from five put-ins: Glacier Point, Tenaya/Sunrise Lakes, Tuolumne/Rafferty, Happy Isles, and Upstream of Merced Lake.

3. Planning an overnight trip on the Upper Merced is best suited for spontaneous paddlers—backcountry camping permits are first-come-first-serve and issued at 11 am on the day you want to head into the backcountry.

4. The name “Merced” means “Mercy.” The Spanish name for the river was original El Rio de Las Mercedes, or Our Lady of Mercy. Take a look at the cascading rapids and monster sieves below El Capitan Meadow and you’ll see why the Spanish would seek mercy in this rugged landscape.

5. While John Muir claimed the glaciated valleys, roaring waterfalls and surrounding mountains of Yosemite Valley deserved to be protected from human impacts, Native Americans had been living in the Merced Valley for at least 8,000 years. The gold rush days of 1849 initiated a swift and violent end to Ahwahnee tribe’s traditional lifestyle. By the 1930s, the Indians still holding on to their homes were relocated.

Editor’s Note: Wild & Scenic Rivers 101 is brought to you by the Wild River Life.