Making Friends: A Crash Course on the Middle Fork

I planned an expedition in Idaho for two reasons. One, I fell in love with Idaho’s rivers long ago, and I knew beyond the river there lied big wilderness. On my earliest river trips I remember noticing the trails going off into mountains unknown, and I said to myself, “Someday, I’m going to return and really get a feel for this place.” And two, I needed a lower-key adventure to heal from near-tragedy. Over a year ago, I (barely) survived a 200-foot fall mountaineering in Wyoming. The trauma led me to crave a different kind of adventure, the type that had fewer chances to kill me, to be specific.

I thought a lot about the risks I had taken in the past. Risks are inherent in most things I prefer to do. But it’s not the risk itself that’s problematic but the fact that I embark on precarious adventures by myself. I’ve pushed my limits and myself and learned to love and accept the effects of my decisions alone, and in most cases in very unforgiving environments. Becoming so self-reliant has been a great discovery, but I’ve been ready to share these experiences with others. 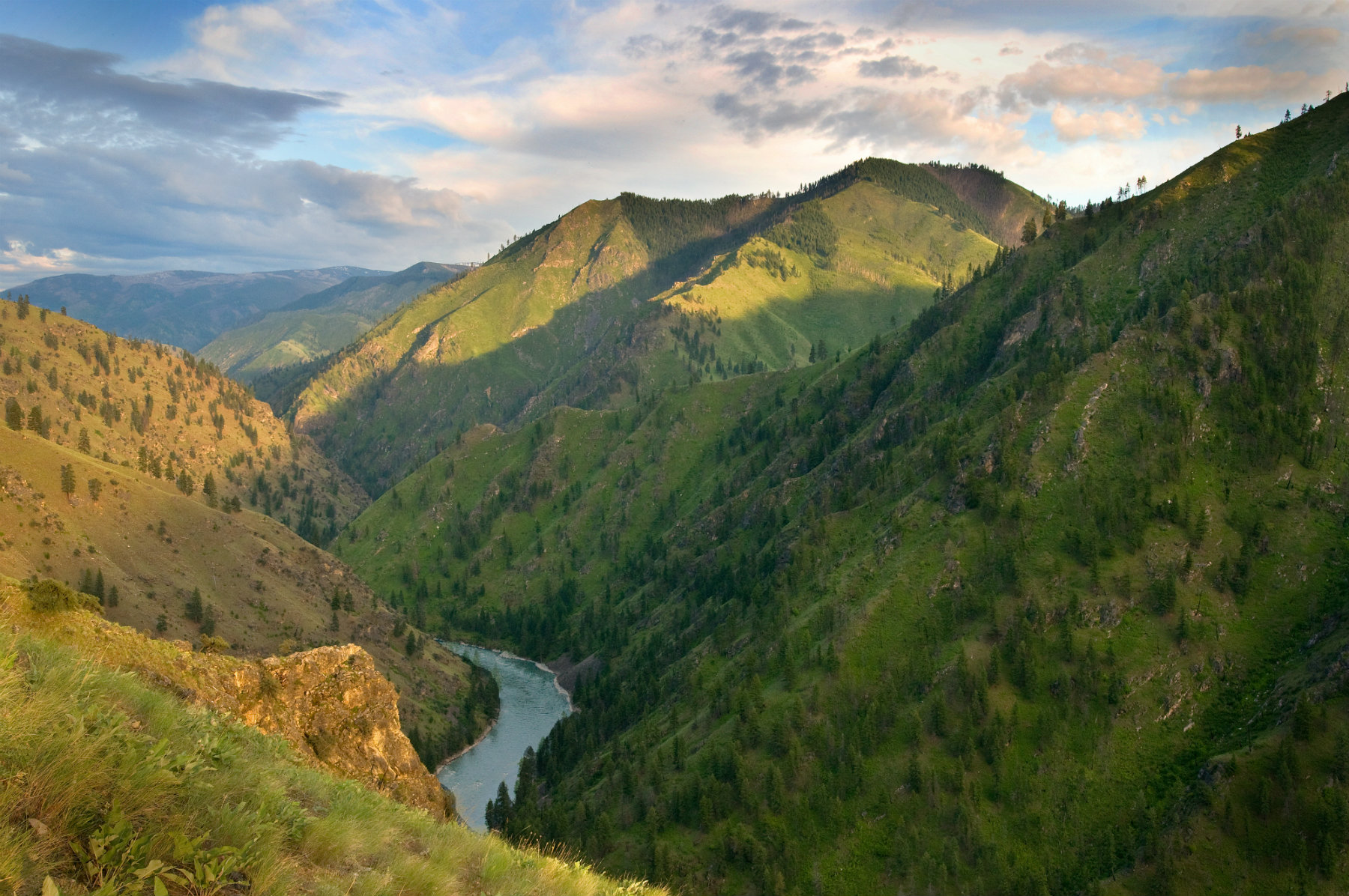 So I planned to spend 45 days moving through 800 miles of the unbroken core of Idaho’s wilderness by trail and river. I recruited fairly reliable partners to accompany the hiking sections, and I joined groups for river sections. As planning progressed and my start date neared, one by one, all of my partners dropped off the trip. Never letting that stop me before, I left it at fate. One of the most critical sections to line up was the Middle Fork of the Salmon River, an 87-mile river section that’s permitted by lottery only. I found a group with a launch date matching my itinerary, and I was very happy to accept their invitation. I didn’t know any of them but was looking forward to meeting and running the river with a bunch of locals.

This leg of my journey started in Hailey and I hitched a ride to the trailhead from a badass kayaker heading to the South Fork. She shared she was a little nervous; she’d never paddled that stretch before. I had the same feeling in my stomach as I looked up at the Sawtooths, still deeply entrenched in snow. That very snow was creating some wicked high water in the headwaters of the Boise and Payette Rivers, as well as every other drainage in the range. The high water made it difficult finding places to safely cross. It occurred to me how helpful a big friend or two would be for these crossings, but what could I do?

On day four, I reached Baron Creek, and my luck came to an end as I once again nearly perished alone in the wilderness. I dragged myself out of the woods rock pounded, dripping wet, freezing, and terrified. I had to take time to heal, replace gear and had a sudden desire to just be inside. I was pretty shaken. This was supposed to be a low-risk trip to overcome trauma. I hitchhiked to Boise, where the majority of the Middle Fork group lived, with plans to crash at a hotel and regroup. My main contacts, John and Jess wouldn’t have any of it and insisted I recoup at their home. 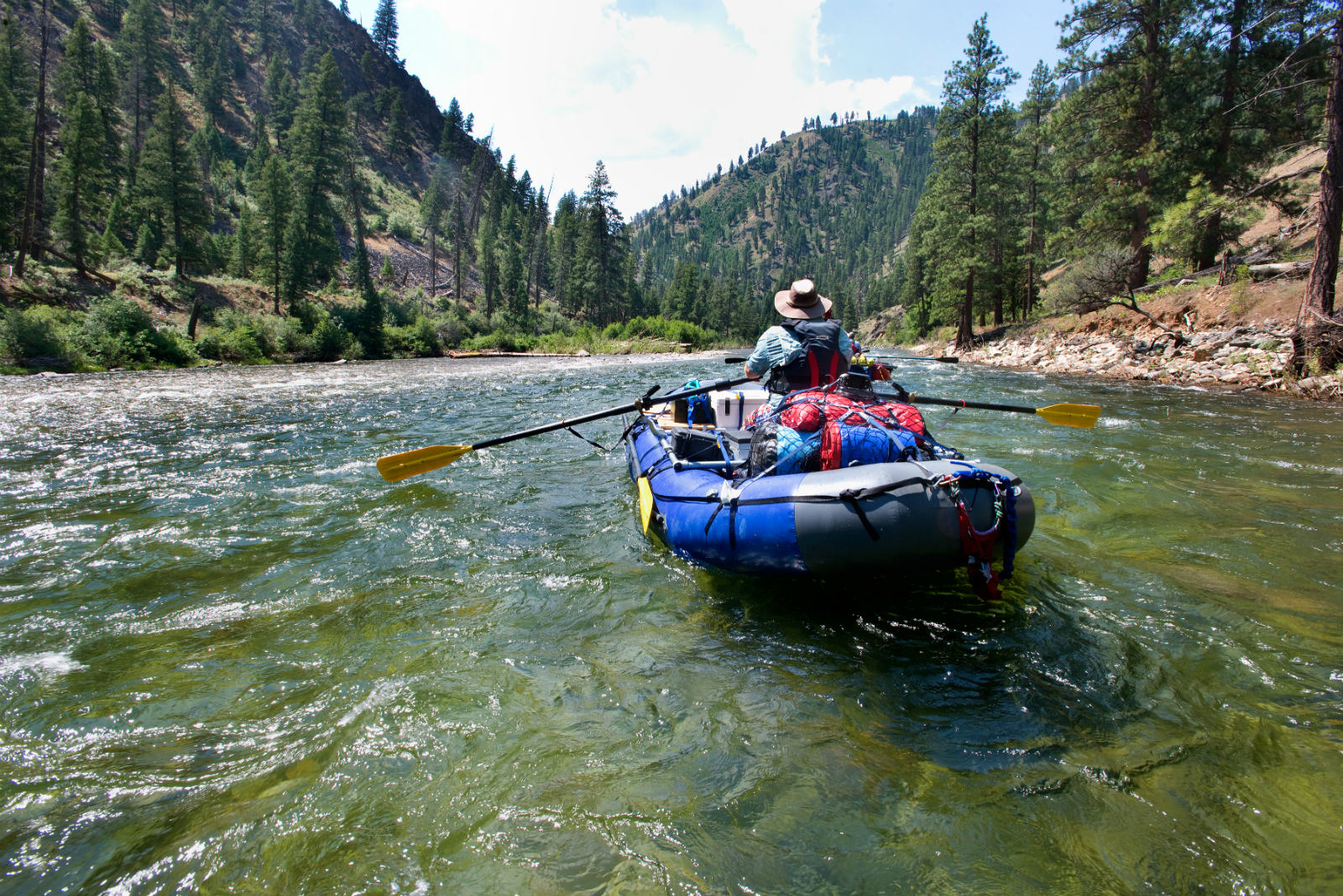 Immediately upon meeting everybody in the group, I knew this river trip was going to be awesome. The graciousness and light-heartedness of the crew, and their willingness to take in a stranger even though they all knew and were quite comfortable around each other surprised me. John only responded, “Get used to it, it’s how we roll here in Idaho.” I embraced their warmth and slowly felt myself unwind from my panicked self-rescue in the Sawtooths.

After (finally) putting in at Boundary Creek, that familiar feeling, that joy as the current hits the stern, took over and I finally relaxed. We bantered amongst our boats, cheering after the drops and laughing at minor sticks on the numerous rocks. It’s hard not to feel on top of the world when you’re on a beautiful river but when you’re with people that know what they’re doing, are mega fun, safe, and you click with, it’s unbeatable! We soaked in the beauty of the changing river corridor by day and by night we ate, drank, danced and boccee’d. 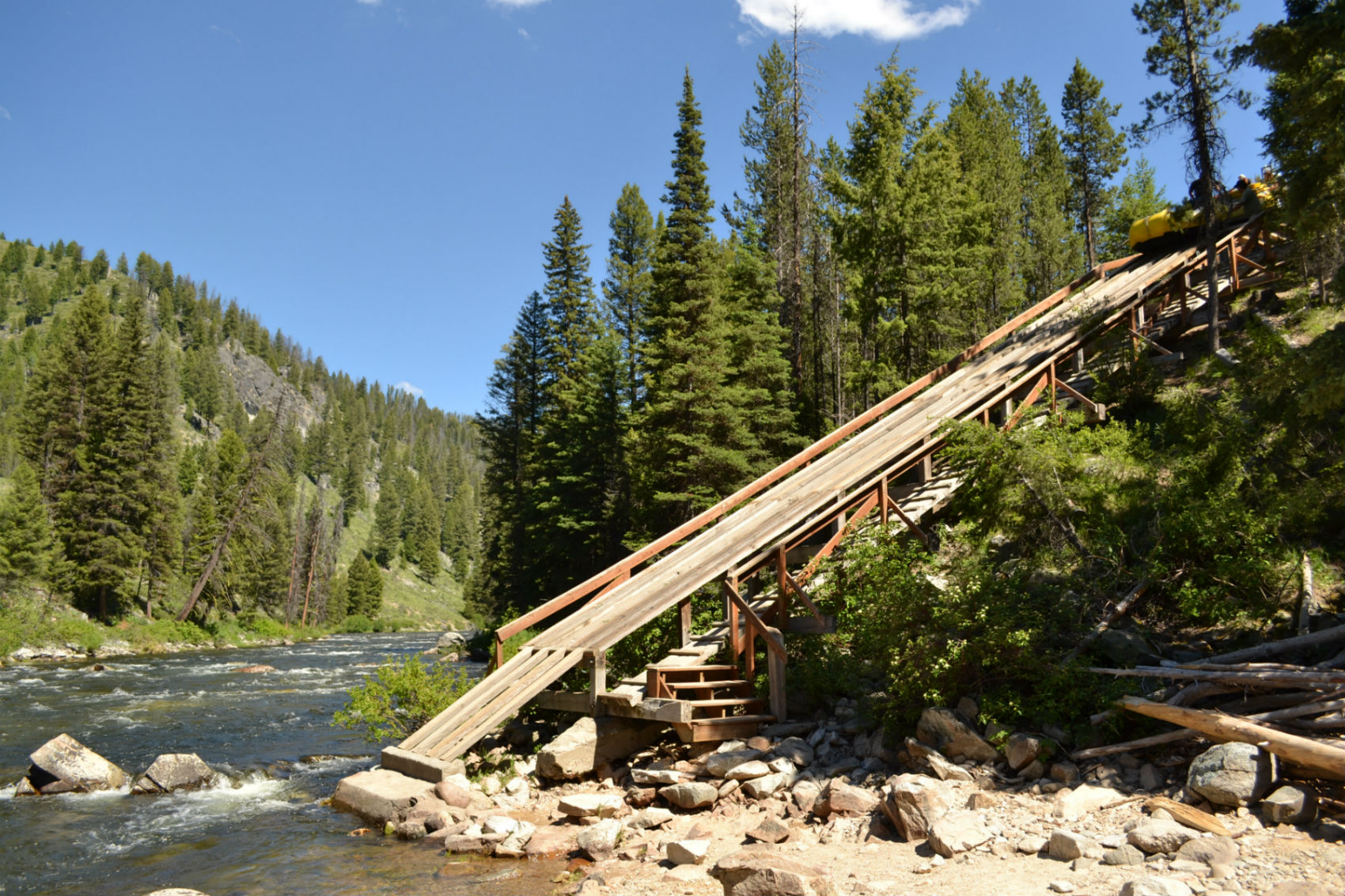 I believe one of my selling points for getting invited on this trip was my past experience on so many rivers. I offered some peace of mind that if something went wrong or somebody got hurt I could easily be a stand-in or help in an emergency. Usually, I’m running my own boat, but to ease logistics I just hopped on with Jess and John. We instantly melded and the days on the river went fast while we got to know each other. John, a guide out of Riggins was great on the oars and gave us good rides through rapids while always finding the time to crack jokes.

I enjoy boating with new people because you have this incredible chance to learn different ways of handling a boat and the river. I reveled the rare opportunity to be a passenger, really watching the river and its currents. I had the chance to spot wildlife and appreciate all the side creeks tumbling down. I soaked in much more of the landscape and photographed so much more than if I had the sticks in my hands.

In the mid-morning of day five, we stopped at Sunflower Hot Springs, an amazing spot in the river’s bend with four or five natural tubs set into the hillside. Below the tubs, a hot waterfall pours over a ledge to the beach below. Several of us were elbow to elbow in a pool soaking, when a wind gust came upriver, bringing with it a rainstorm. We sat out the storm in the hot water and watched the sheets of rain move through the canyon. The storm didn’t last all that long, and when another trip came in we took our leave and continued downstream. 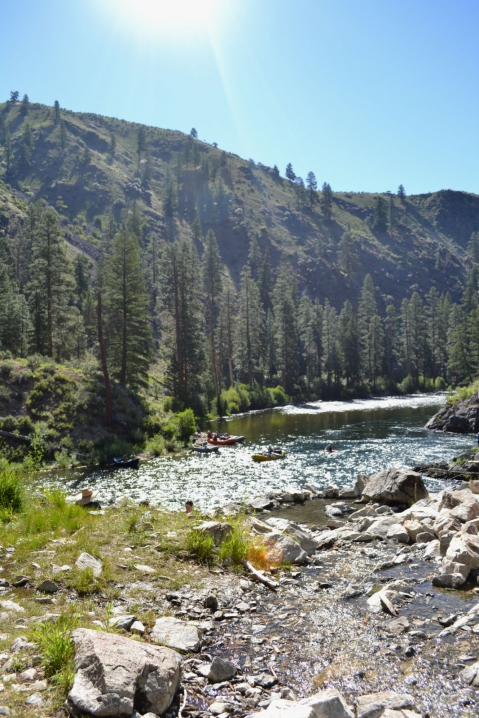 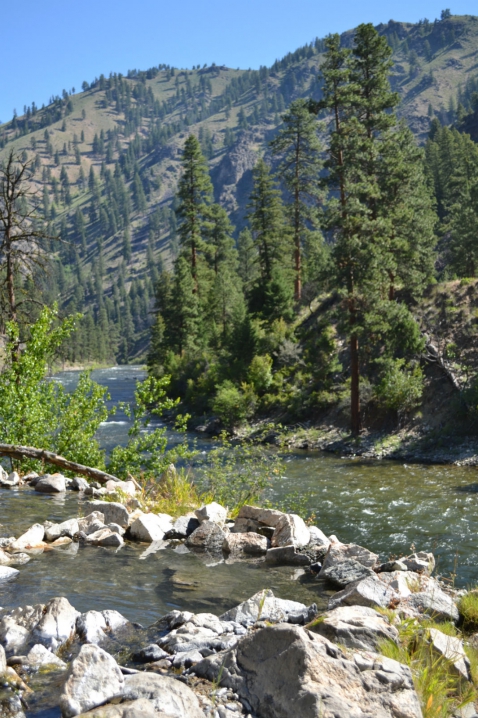 We stopped just around the corner for lunch at a beach called Whitey Cox. The river guides note this spot as a medium-sized beach on river right marked by a large lone ponderosa pine. It’s named for a homesteader who lost his life on the beach when the river’s bank collapsed upon him; he’s buried on the hill above the beach.

Chicken Caesar wraps curbed our hunger. In the shade of the lone ponderosa, I interviewed Spilly while others took naps. There’s no point to rush when you’re on river time and we embraced that theory wholeheartedly. Finally, as we were about to leave the beach, people were on boats and bowlines were being coiled when Paul suddenly shouted “Look out! Move!” I looked up. The top of the ponderosa shuddered. I ran. And in a split second, without so much as a squeak or groan to warn us, this behemoth came crashing down on three of our boats. Nine people were in the wake of it as it fell. 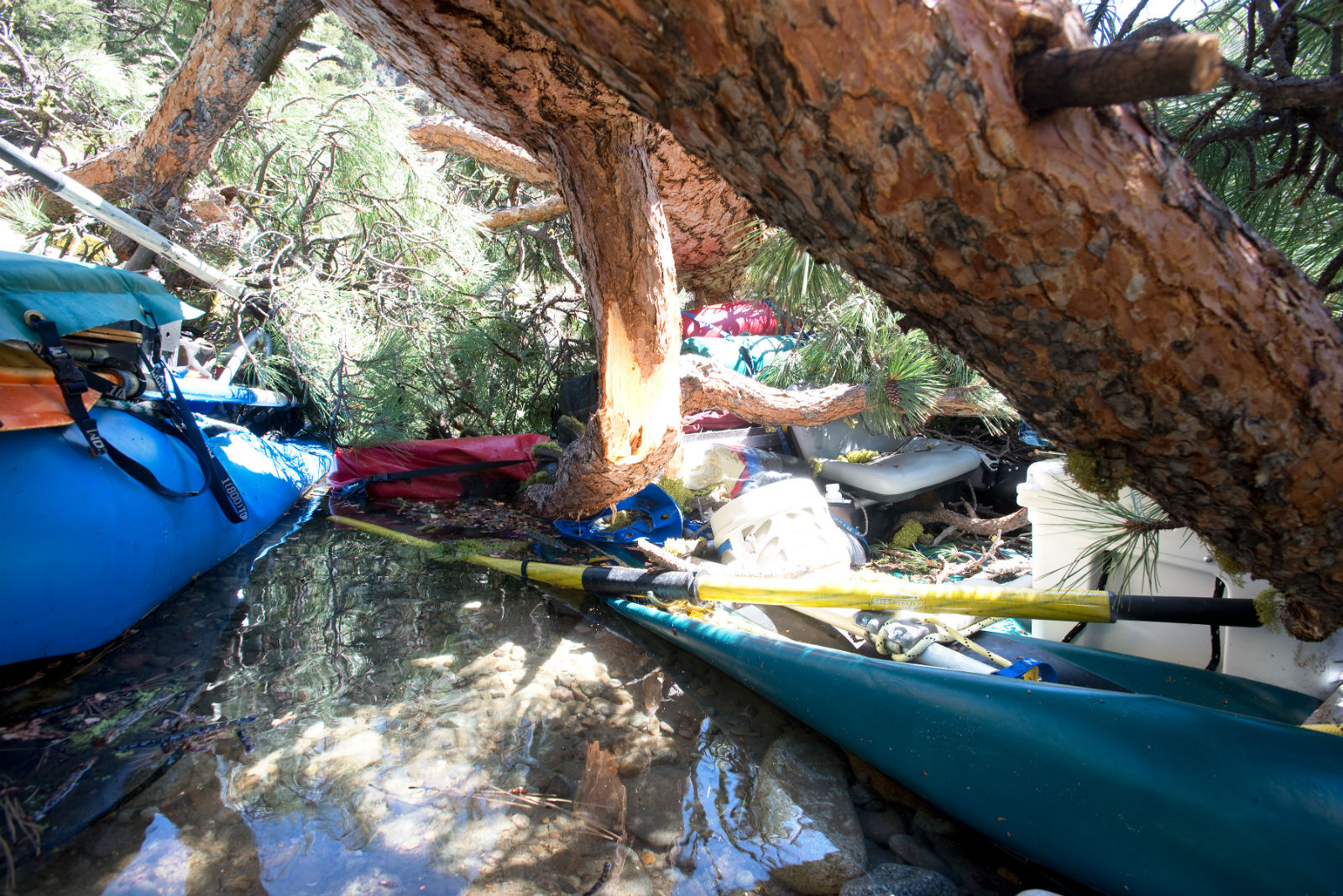 Nervous to see what or who might have been damaged, we surveyed the scene calling out for those we couldn’t see. Everybody was accounted for, except Holla, whose boat was in the middle and under the majority of the giant pine. We called him a few times before we heard a weak response but no visual. We were able to reach him, pull him out from the debris, and assess he had avoided serious injury and entrapment by jumping off the back of his boat and hiding under the stern of his raft, which had essentially exploded and sunk under the weight of the trunk and branches.

Holla was dazed. We sat him down for a full medical evaluation and thankfully found only a small contusion on his head. We stabilized him in the shade and came up with an extrication plan for the three rafts. Luckily, John had brought a handsaw. We took turns dismantling the tree, careful to do so in a way that wouldn’t create more damage. Then we derigged the boats. I would never have thought we were going to be able to get Holla’s boat out, by how much of it was under the mass of the pondo’s trunk, but a few hours and many buckets of sweat later, we managed to get all the boats out and onto the beach to repair. It was close but somehow we had enough of the correct patching material to cover the numerous holes in the three boats. 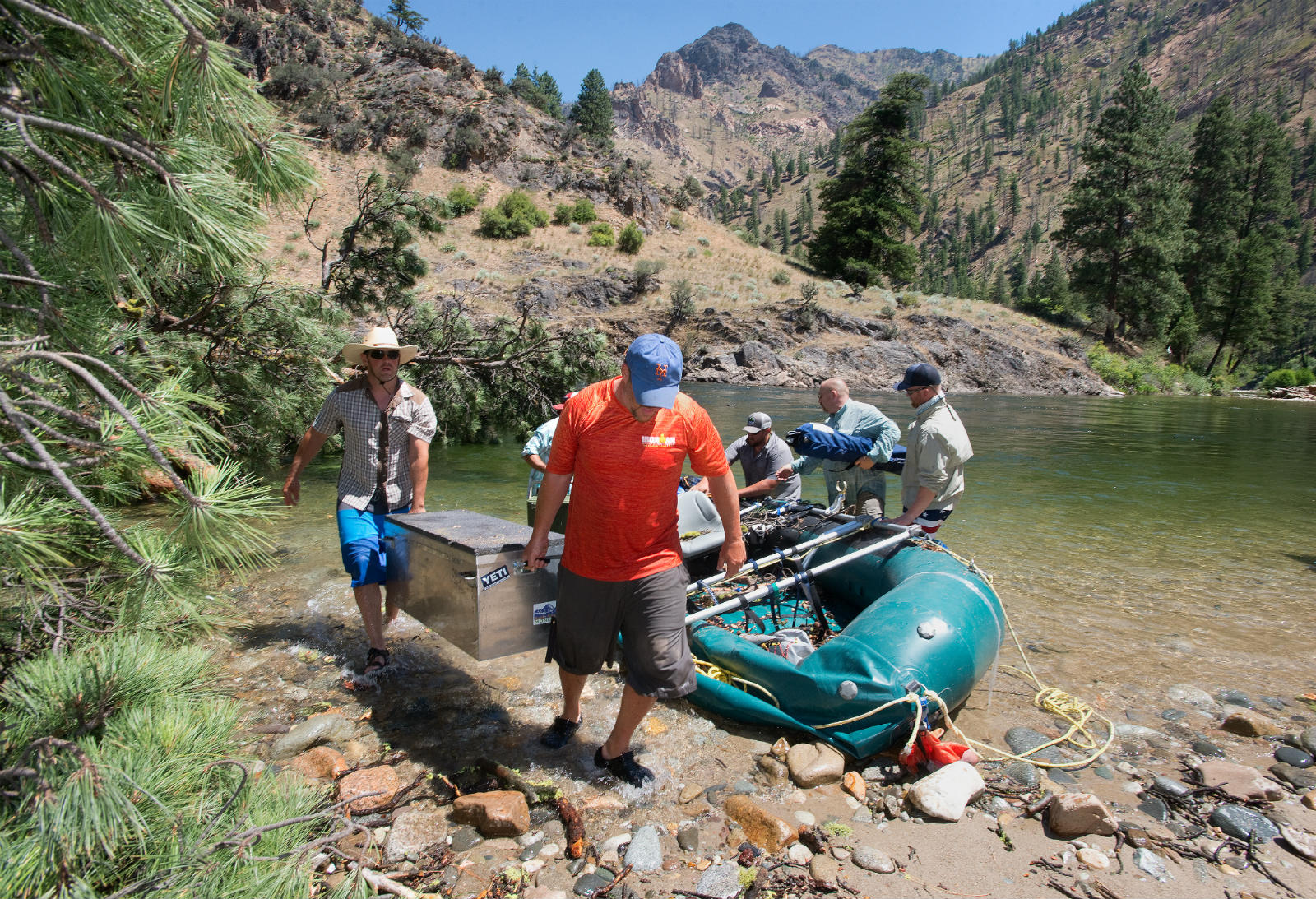 Here’s the thing that makes this situation and group so special. After the initial shock of the event and taking care of any injuries, we got to work right away to come up with a solution. We moved quickly, together, without any additional drama. Things got serious real fast, but nothing was out of control. We had patches on and setting by sunset and pulled pork sandwiches for dinner.

As the day came to a close, we were shaken, but spirits were high. We had shared in this near-death experience and realized just how lucky we were that things weren’t worse. We celebrated our luck and slept that night as a group on the beach, our Paco pads lined up under the stars and far away from any trees, just happy to be with each other, the scent of pine heavy in the air. The next day we got a later start and we needed to make miles, but it was a stop and go to re-pump Holla’s raft every 10-15 minutes. 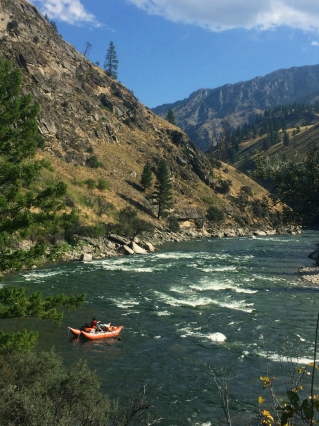 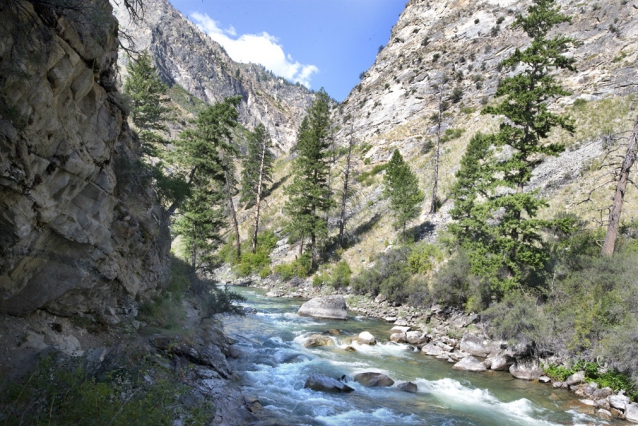 The last night on the river, before I left again on my own on foot, I took the time to chat with most everybody on the trip one on one. Each shared feelings of camaraderie and adoration for the love of the wilderness river trip, but my conversation with the trip leader, Brian, was most touching. He openly told me he had second-guessed my being on the trip, wasn’t sure how an “outsider” would do with the group. He thanked me for the help at Whitey, and said, “making it through that situation together yesterday, especially as well as we did, will bond us forever.” We stayed up late that night, many more drinks and laughs were shared around the fire.

So although I planned this Idaho journey in hopes of avoiding death-defying events, it was refreshing to be in such a situation amongst boaters that were capable of overcoming obstacles and getting downstream after. I’m still grateful to have survived (again) but even more so that I didn’t have to survive it alone. What Brian said of our bond is true, the event at Whitey Cox put us on the fast track to make true and long-lasting friends in the wilderness. I hiked on, away from the group feeling warm and not so alone, and I carried this feeling northward through Idaho. 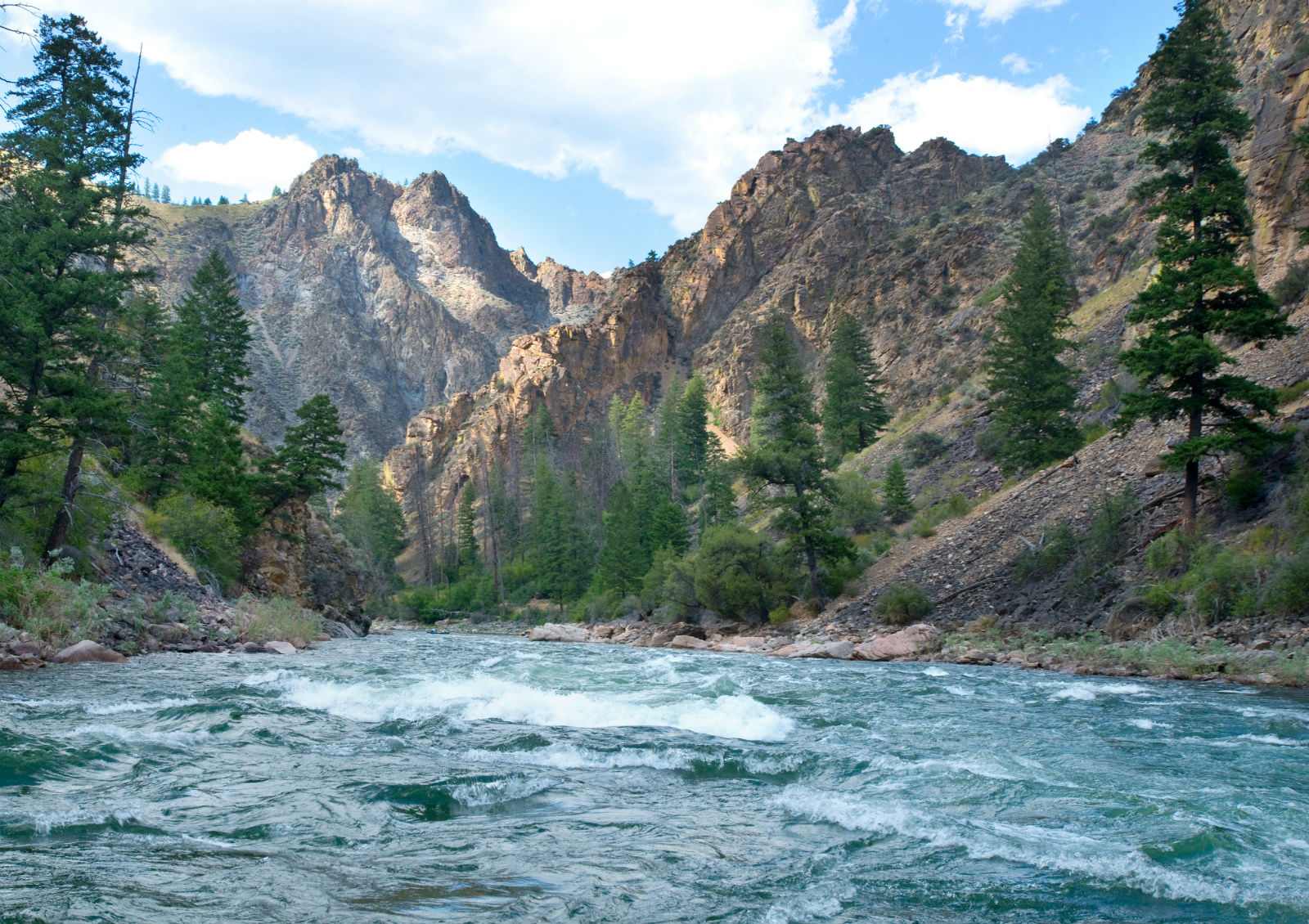 Editor’s Note: Guest blogger, Kristen Caldon is a photographer and adventurer. In 2017, she set out to hike, raft, and photograph an 800-mile section of the proposed Hot Springs National Scenic Trail.