A Glamorous SUP Trip Through the Bitterroot Valley

Moments before leaving Missoula, I stood at the Jeep dealer half listening to the technician explain to me there was a serious issue with my suspension system while I watched snowflakes falling past the showroom windows. Snow. When I envisioned this trip, I pictured wearing boardshorts and drinking craft beer while we floated in the sunshine and reflected glow of the golden cottonwood leaves.

At this rate, we were unlikely to actually make it to our destination without vehicular catastrophe and we would certainly not be wearing shorts. The technician proceeded to tell me it would take them four days to work the Jeep into their schedule. So I did what anyone embarking on a two-day river SUP trip would do, I pulled the fuse to the suspension compressor and drove the “lowered” Jeep out of the service lot and toward the Bitterroot River. 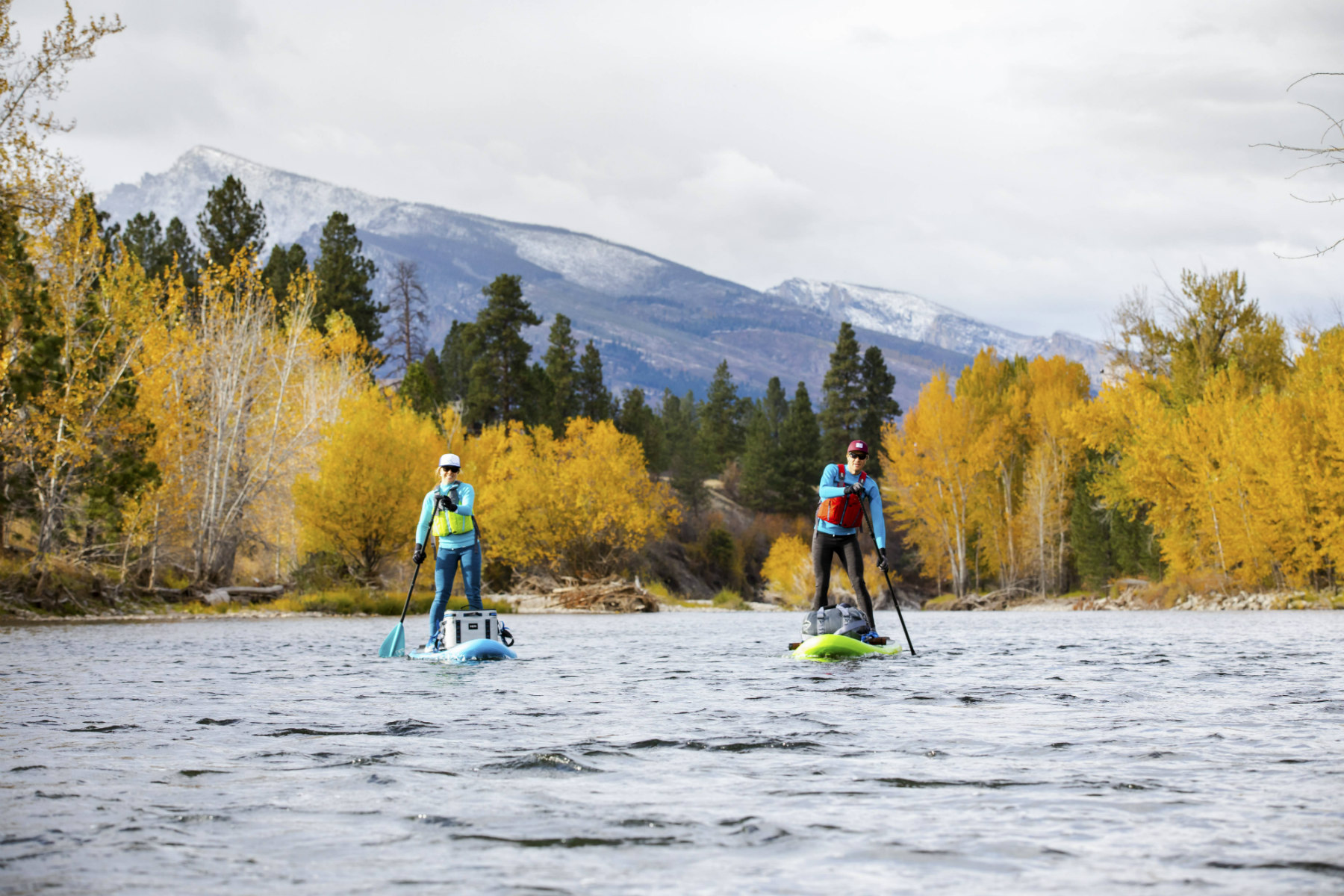 I went to school in Missoula, Montana for four long years and am slightly embarrassed to admit that I’ve never paddled any stretch of the beautiful Bitterroot River. Two years ago, during a fall photo shoot in the Bitterroot Valley, the backdrop of thick evergreens dappled with turning maple, aspen and cottonwood trees blew me away. Somehow, I had never realized what an incredible place the Valley was and so close to my home for many years. To redeem my wasted years of college (aside from the learning and getting a degree and stuff), I vowed to spend a few days on this gorgeous river. I twisted the arm of my friends Brandon and Katie French who seem to end up on just about every SUP adventure I pull together, and we picked a weekend with decent looking weather for our “glupping” adventure (glamorous SUP’ing).

So many of my paddleboard schemes have so much inherent risk and danger that I often don’t sleep much in the days building up to the launch. This trip was supposed to be the opposite. No threat of sharks, surf, or rapids to speak of. Relatively chill water, beautiful colors, cush camper living, hot meals and cold beer. However, the standing temperature and schizophrenic precipitation were certainly not cooperating with my plans. We nursed the Jeep down Highway 93 to Hamilton cruising through intermittent wind gusts, rain, snow, and sun. Stopping at a little fly shop in town, we gathered the river information we needed and headed for the put-in. 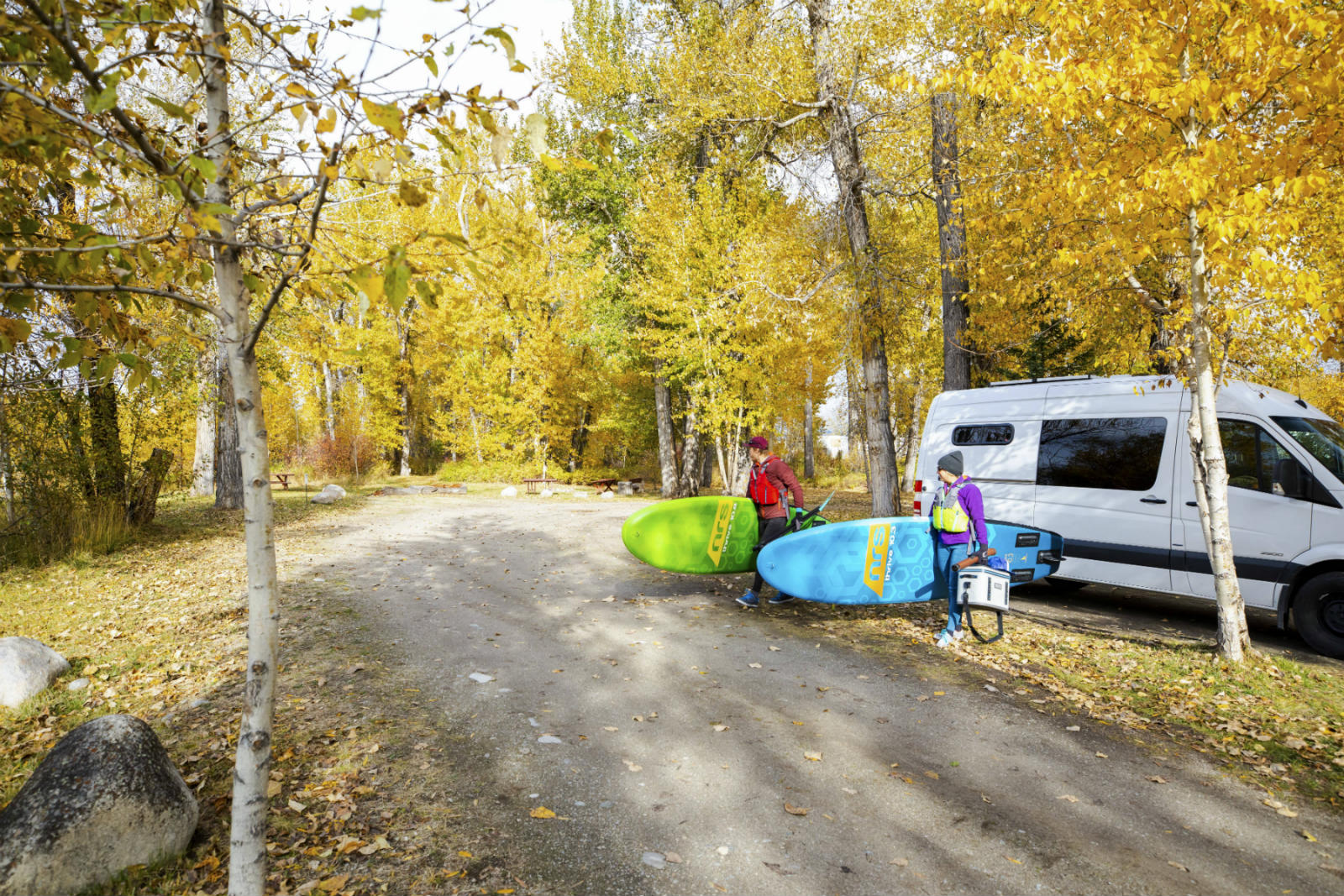 We layered the neoprene on thick and shoved off into the frigid water. Our goal was a scenic little stretch of the Bitterroot from Angler’s Roost to Kiwanis Park in Hamilton. My wife and son planned to meet us (and shuttle) for a tasty meal downtown. As we paddled down the shallow water, the skies slightly broke and moments of sunshine provided a little hope. The paddling was pretty straightforward. With the water so low, we navigated downriver easily, and what few obstacles arose, we avoided without much thought. But the biting north wind prevented us from shedding any layers and kept our fingers in a constant state of tingly. 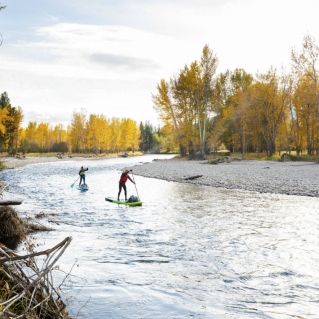 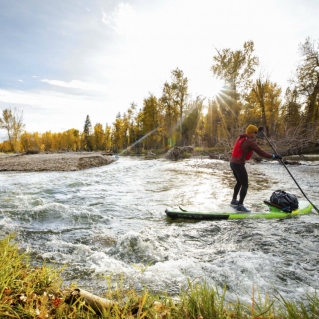 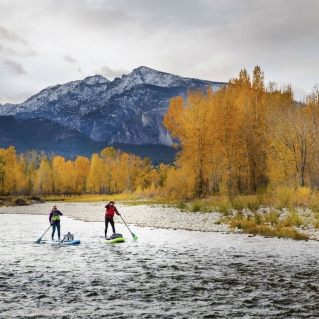 Sometimes when you’re paddling, especially when the weather is rough, you lose yourself in the head-down-one-more-stroke rhythm and forget to really look around. Case in point: distracted by the blinding yellow blaze of the cottonwood leaves, we almost paddled right up on a huge bull moose. We crept toward the giant bull as he feasted on willow branches on river right. Pulling over on river left, we watched the awesome animal chow down from a safe distance. He looked up at us a couple times but remained mostly disinterested in his new audience. The sheer size of the Buick-sized beast was impressive in and of itself, but being out there 50 yards from him was pretty amazing. We didn’t want to overstay our welcome. We snapped a few photos and paddled on down the river.

The combination of the fresh snow on the jagged Bitterroot peaks paired with the deep hues of the fall foliage made for quite a visual treat, especially as the light began to soften into the sunset. We were lucky enough to snag some choice photos before we lost the light just as we floated into Kiwanis Park. 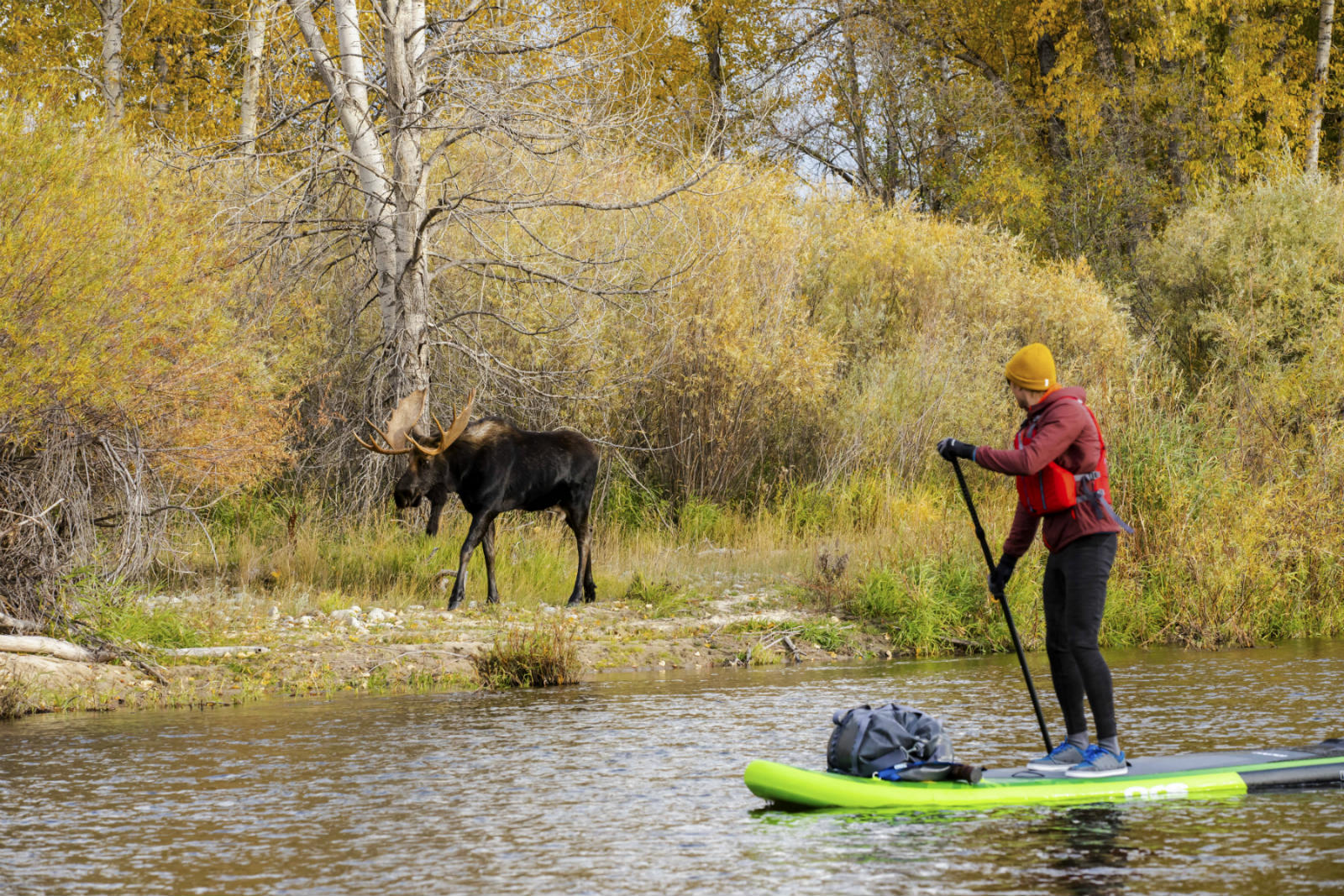 We quickly loaded up the gear and headed directly to Bitterroot Brewing, which came highly recommended by some Missoula friends. With an array of options—I’m not going to lie, I chose the Curds and Bacon Burger—there’s something on the menu to refuel the spent calories of a day’s paddle, whether you’re a meat-eater, a vegan, or gluten-free. And to top it off, this small Montanan brewery crafts some delicious beers using Montana grown and malted Barley as the base for all of them.

Live bluegrass soundtracked our evening until my two-year-old son, Caleb, insisted he had had enough of the brewery and we needed to leave immediately to have “wood-fire.” A toasty riverside campfire, some dark chocolate, and Caleb as constant entertainment, took us deep into the evening with a few more brews in hand (this time from our friends at Kettlehouse Brewery in Missoula). We watched the stars begin to emerge in the darkening sky before calling it a night. 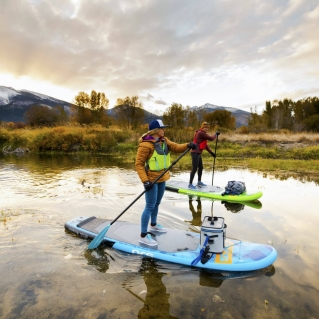 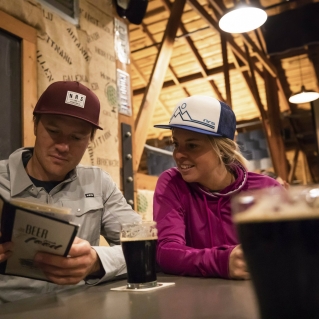 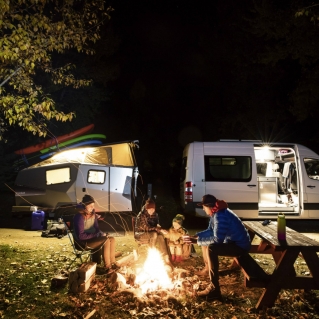 I had few complaints about the paddle—remember that headwind?—but glupping has one major advantage: a warm night in a cozy camper bed. More snow on the ground welcomed us the next morning, but the weather prediction promised sunshine and we crossed our fingers for warmer weather as the day progressed.

Despite the forecast, brushing snow off of your paddleboard before another day on the river just doesn’t feel right, I certainly hoped for a more enjoyable paddle. Caleb demanded another “wood-fire,” and since we had more wood to burn and wanted to eat outside, we built another. We discussed our paddle options for the day and decided to head deeper into the Bitterroot Valley to a put-in just south of Darby.

After loading up the sagging Jeep and Sprinter, we headed down 93 to Darby. Originally planning on picking up some lunch, possibly some coffee, we learned Darby on a Sunday was basically a ghost town. But there’s a beauty to a small town in Montana on a Sunday, makes you feel like you stepped back in time a bit. The local grocery store would have to do for the day’s provisions. We dropped a vehicle at the takeout, rode with Caleb and my wife to the put-in, about seven miles upriver and said our goodbyes. 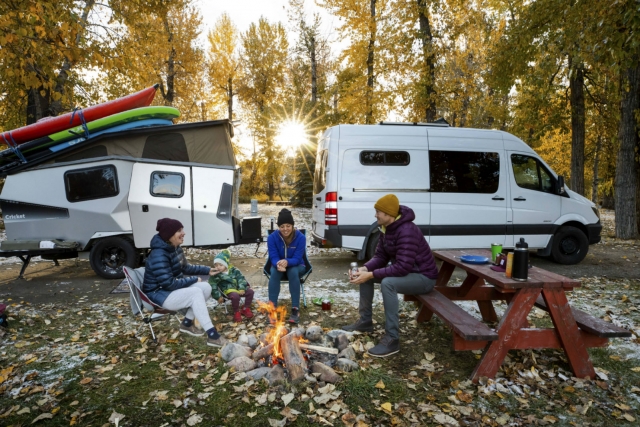 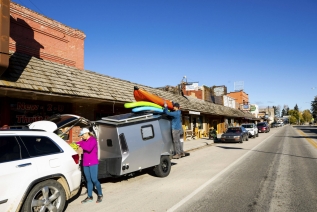 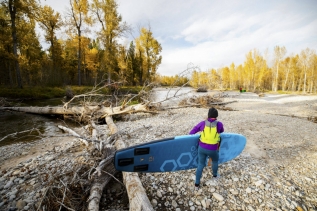 This stretch of river had considerably more obstacles. A few sweeping corners threatened to shove you into strainers, and a handful of sleeper rocks could easily pick off an unsuspecting SUP’er. There were two mandatory portages around some pretty gnarly logjams, but thankfully the current flowed slowly enough that it was relatively easy to make the ferry to shore when needed. I can only imagine the nightmare it would be to standup paddle this section at high water.

Our early-morning finger crossing paid off and by mid-day, it was actually warm enough to bust out the fly rods for a little while, but neither Brandon nor I were able to get any fish to shore. I think we’re better paddlers than fly fishermen. 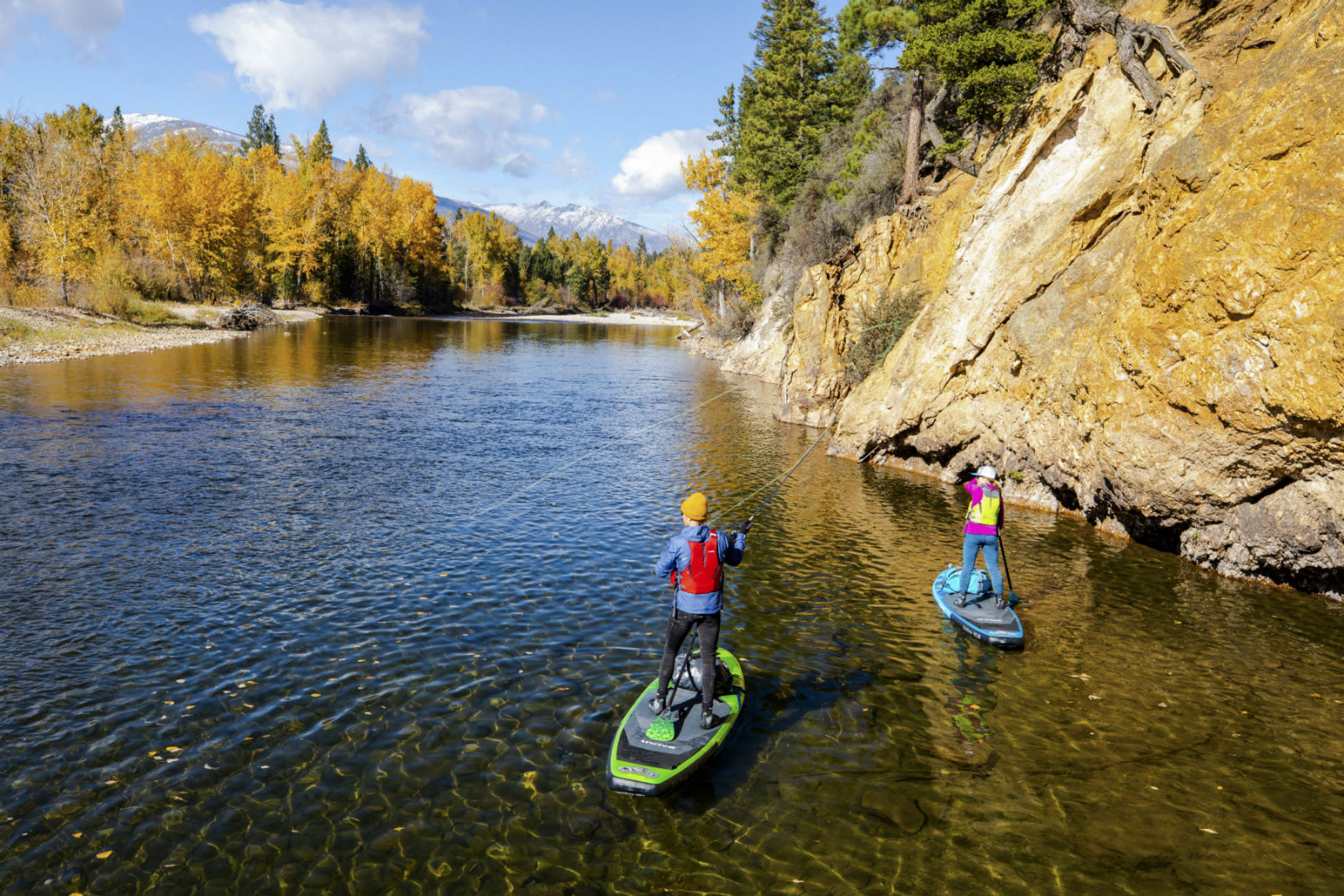 The river wound through some gorgeous stands of cottonwoods, aspen, and birch trees all echoing a similar yellow glow to the previous day’s paddle. We saw only one other party on the river and felt pretty fortunate to soak up some October sunshine on this gorgeous stretch of water. We even shed a few layers as the sun heated our backs on the wind-less afternoon, such a contrast to the previous day.

While enjoying our picnic lunch and a couple of Double Haul IPA’s, we watched as the morning clouds clinging to the mountain peaks began to dissipate. If you’ve never stared at the Bitterroot Mountains while thin white clouds peeled away from the peaks, it’s pretty mesmerizing. We sat in silence, sipping beer, and soaking up much needed Vitamin D. The beauty of inflatable SUPs is that no matter where you go, you have a seat, a table, a bench, a bed that you can set up right on the rocks. 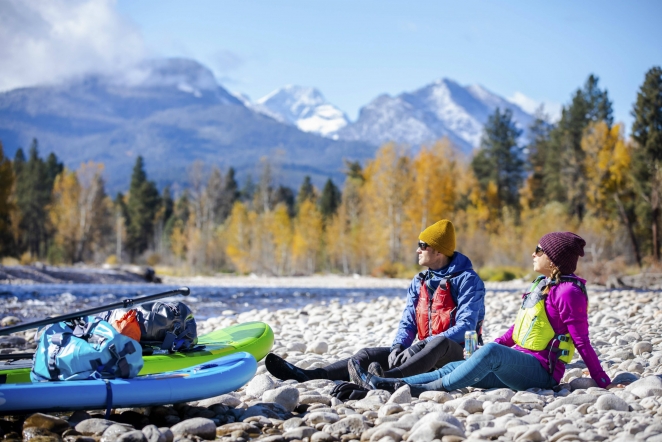 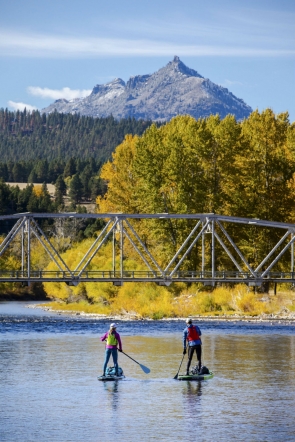 The opportunities for adventure in Montana are limitless. This simple perk may be what I love most about my home state. Exploring Montana is kind of like picking huckleberries. At first pass, you snag the largest and easiest berries to grab, but the deeper you dig, the more you keep discovering.

When I first moved to Montana 15 years ago, I poured over maps and guidebooks, creating lists of adventures that got a lot of ink and press. The longer I live here, the more I realize that I’ve only scratched the surface. There are so many miles of un-paddled river, unseen peaks, and corners of the wilderness just waiting to be found. Some are more obvious than others, but this trip was a great example of a not-so-hidden gem waiting to surprise us with its beauty.

Editor’s Note: Guest contributor, Noah Couser is a professional photographer and health teacher who works to inspire people to connect with the outdoors through recreation. He lives in Whitefish, MT with his wife and son. Read more from Noah here.