When kayaking, tangled in the branches of a tree is not an ideal place to be. Unless…that tree is a fig tree, with plump ripe fruit dangling over a calm pool. Beside me, my friend Elli is hidden behind a veil of thick, bright foliage, straining to reach a fig just out of arm’s length. We are between rapids on Bulgaria’s Struma River and this wild fig tree is like a gift from the gods.

Culture, food, whitewater. Three things you get when traveling off the beaten path to Bulgaria. Bordered by Serbia and North Macedonia to the west, Romania to the north, the Black Sea to the east and Turkey and Greece to the south, Bulgaria is a true crossroads of culture and geography—plus, it has some rivers worth exploring. 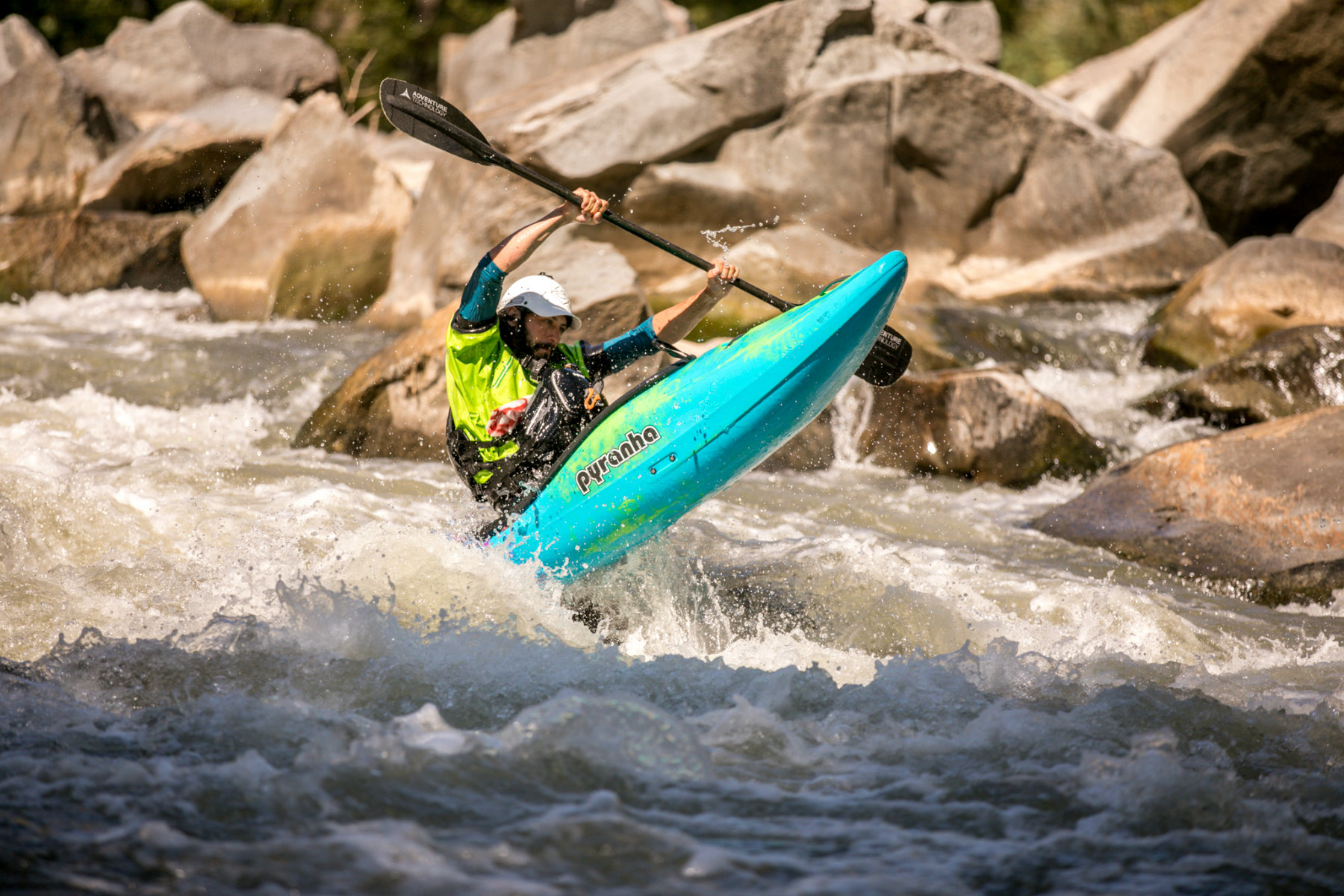 Wander Sofia
The capital city of Sofia is the place to start (or finish) a paddling trip to Bulgaria, with lots to explore, learn and taste. The Sofia airport has direct flights from most European countries and is only a 20-minute drive from the historic town center. Public transit trains and buses will also get you downtown in less than half an hour. Unless you’re traveling with kayaks. Rental cars are available at the airport, but so are rental kayaks at most rafting bases, so take your pick on how heavy or light you want to travel.

Sofia is packed with culture, cuisine and activities making it a popular city for travelers, so the ample selection of downtown hostels gives you some choice when it comes to where to lay your head. Two local women own and operate Moreto & Caffeto Hostel, which also has an attached vegetarian restaurant and bar ($8-19 euro per night). Hostel Mostel is a renovated 19th century building with a romantic wooden veranda and all you can eat waffle breakfast ($8-14 USD). Many hostels offer day trips out of the city, to popular spots like the Rila Monastery, Seven Lakes and a cave with holes through the ceiling called the Eyes of God cave. 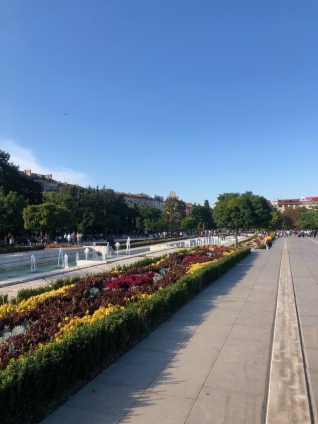 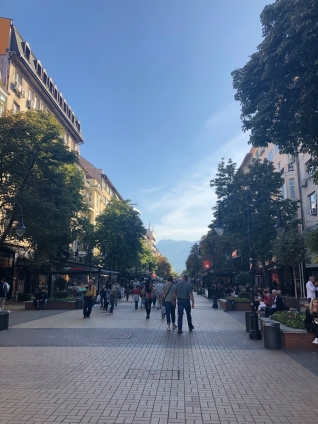 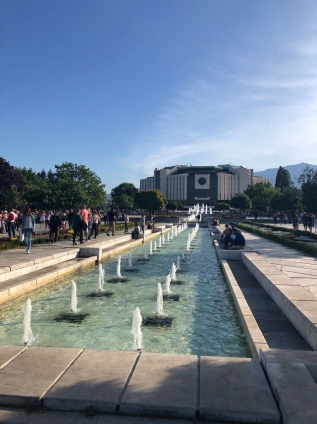 While wandering Sofia, you’ll take in the contrasts of a country straddling European and Asian cultures. The mix of historical architecture, with synagogues, Russian Orthodox churches and mosques sprinkled throughout the city illustrates this collision of ancient civilizations. Green parks, fountains and statues give way to post-soviet architecture like the Largo, which houses the Bulgarian National assembly, historically used as quarters for the Bulgarian communist party. As a former member of the Eastern Bloc, Stalinist architecture is strongly evident throughout Sofia, with remnants of socialism visible in the concrete block apartment buildings, where the stories and culture of this rich country are hidden in the cracks.

Local cuisine gives a literal taste of the Euro-Asian influences, so be sure to stop at corner stalls selling sweet or savory crepes. Or, sit down at one of many park-side or roadside restaurants for an inexpensive four-course Bulgarian meal. You’ll start with a shopska salad, a typical Bulgarian salad of chopped tomatoes, cucumbers, onions and peppers sprinkled with Bulgarian white cheese. Followed by a plate of kyufte, grilled spicy meatballs or a filling kavarma meat and vegetable stew served in traditional clay pots.

For art and history check out the Bulgarian National Art Gallery and the National Archaeological Museum. Or stop at the Museum of Natural History in Sofia to get into the flora and fauna of Bulgaria’s rivers. 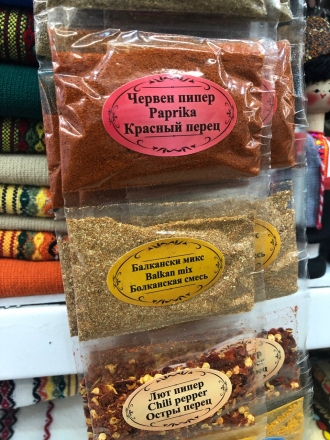 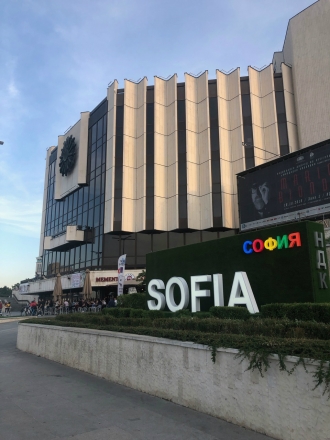 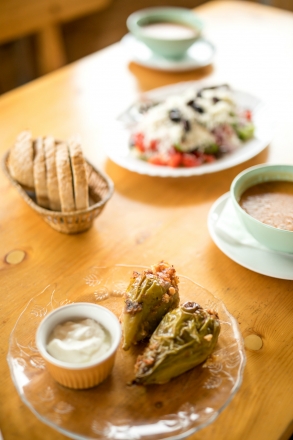 Paddle the Struma River
The season you visit Bulgaria will dictate your travel-to-paddle ratio. The off-season months of early spring or late fall are the best times to visit if you want a balance of on and off-water activities with fewer crowds. However, if whitewater is your sole priority, then spring is the season when snowmelt feeds the Struma and its tributaries.

Located in southwestern Bulgaria, the Struma River is a two-hour drive from Sofia. Many rafting companies and clubs have offices or bases downtown Sofia where you can get info about rentals, rates and water levels. Hire a car or hop a bus to get deep into the Kresna Gorge.

The Struma River, or Струма in Bulgarian, starts in Bulgaria’s Vitosha Mountain and runs west then south carving canyons and gorges—like the Krensa Gorge—before crossing into Greece where it feeds into Lake Kerkin, before flowing from the lake into the Aegean Sea. The 260-mile river has an incredible number of small tributaries with rich endemic fish populations, and larger tributaries which include the Konska, Dragovishtitsa and Rilska rivers, among others. 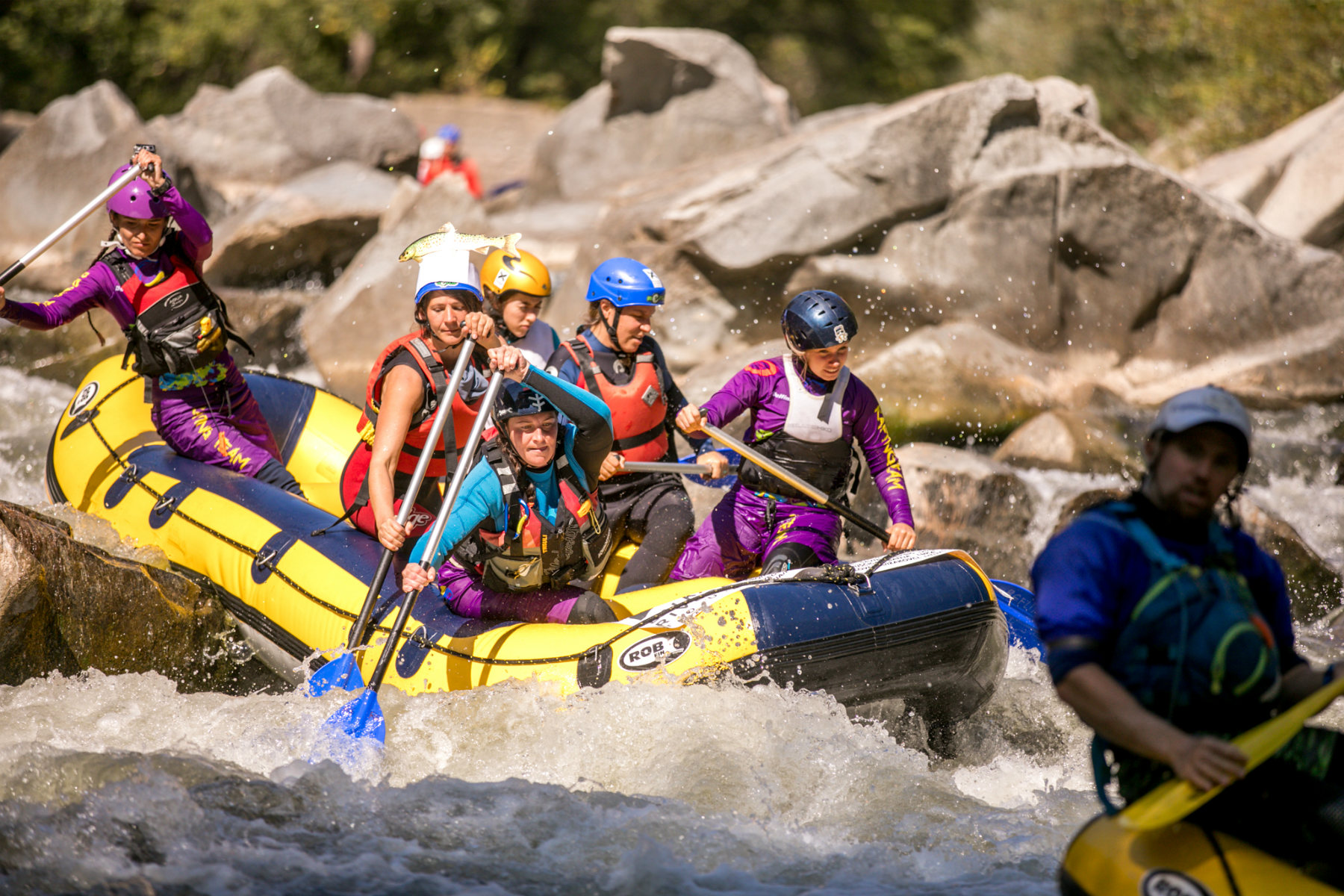 Local rafting companies and kayakers paddle the Struma year-round, on all water levels. It’s one of the most popular whitewater paddling rivers in Bulgaria. On our fig-picking descent we paddled typical autumn low flows, but we were still able to find some fun rapids and play waves, ideal for beginner kayakers learning to pick their own lines and read water.

In the spring, the Struma is a class III-IV river and the upper section has almost a dozen class II-III rapids. Two more challenging, class III+ rapids come next: “Two by Four” and “The Kazan” which require scouting. The Struma is a roadside run so portaging is almost always an option. There are some longer whitewater segments, one of which is almost one-kilometer of continuous read-and-run before hitting the official takeout, about two-kilometers downstream from the roadside rafting bases and restaurants.

Take out on the river left right after going under the concrete block bridge leading to the village of Oshtava where there is ample parking 100 meters off the main highway. The whole run will take about two hours—more if you stop to surf some of the big waves and munchy holes. Drive back upstream for two minutes and stop for a cold pint or fiery rakia and some whitewater banter with the Rafting Club Reflip and pick up local jams, honey, milk and nuts sold on the roadside. 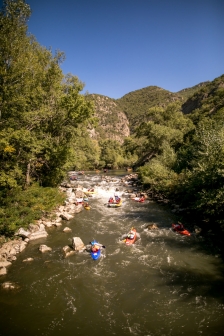 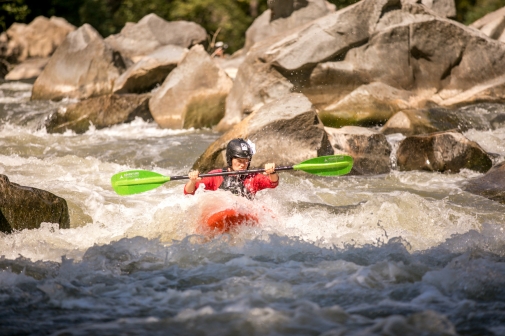 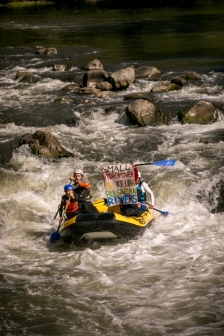 Typical overnight accommodation options in the Kresna Gorge vary from guesthouses and AirBnBs like Villa Sunrise or Hotel-Restaurant Struma (both about $20 USD/night). If you’re looking for somewhere with a view of the night sky and traditional, home-cooked food, Debeli Dab Eco Village ($10-26 USD/night) in the village of Stara Kresna is where to go. It’s a 15-20-minute drive up from the riverside highway, but the mountain views and silent evenings make it worth every turn on the windy paved road.

At the foot of the Pirin Mountains, Debeli Dab offers camping, 12 rooms with en-suite bathrooms and a restaurant-bar. All the comforts of home (cough-hot water-cough) can be found there as well as rental bikes, internet and stunning balcony views. Hot and fresh homemade burek (cheese or meat filled Balkan pastry) for breakfast, cold yogurt cucumber dill soup called tarator for lunch and traditional stuffed yellow and red peppers for dinner, topped off with homemade ice cream that tastes like a melted chocolate bar…and you have the ultimate rest and recovery recipe after a day of paddling. 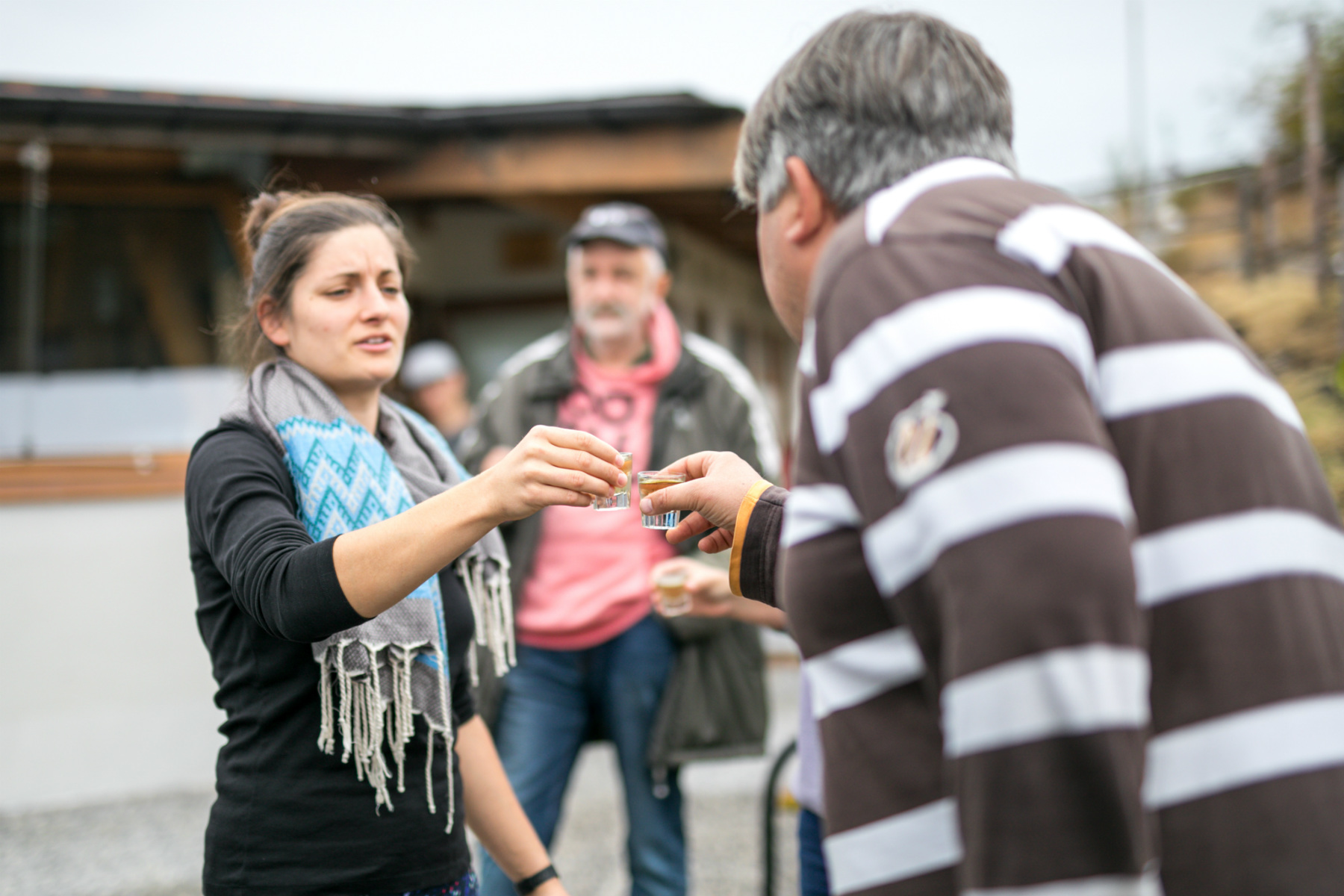 More Rivers + More Activities
More experienced or adventurous kayakers can try paddling the Devinska and Buinovska rivers, but water levels and local advice is necessary as the steep gorges of these river are home to logs and strainers. There are many hiking trails in the region, as well as fishing on the Struma and tributaries. Be sure to get a fishing license, which can be purchased at fishing shops in the nearby city of Blagoevgrad for $2 USD for the week.

In three hours you can drive to the Aegean Sea in Greece, and about five hours to the Black Sea. Wine tourism is a budding industry in Bulgaria, celebrating the region as one of the oldest wine producing areas in the world with evidence of primitive wine production dating back to 4000 BCE/BC. 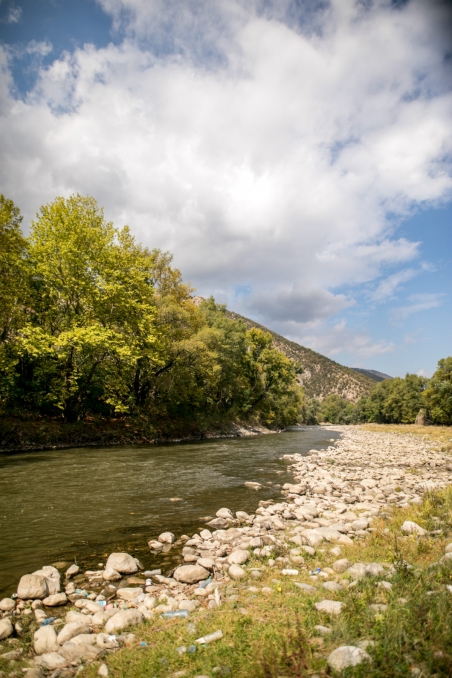 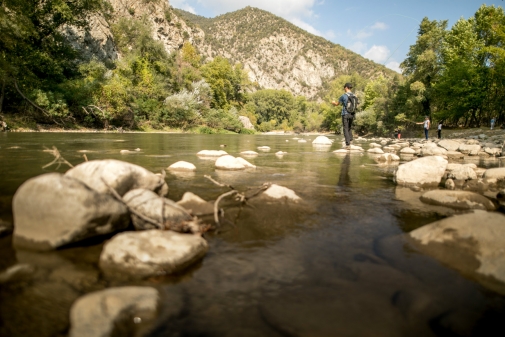 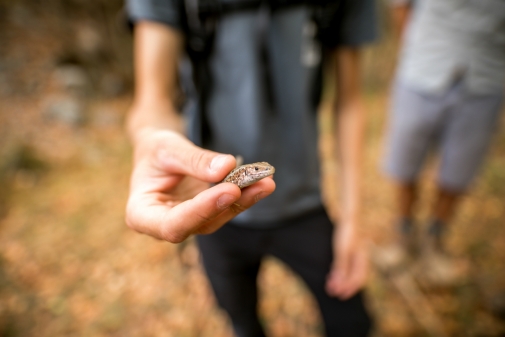 With our fig juice on our hand, fig seeds in our teeth, and fig flesh in our bellies, we untangle ourselves from the tree branches and paddle after our friends, offering them each a fistful of fruit. Drifting into the next rapid, we gaze up at fog weaving its way between the tall limestone spires, hoping to see an Egyptian vulture soaring through on its migration to Africa. The rugged mountains and valleys of Bulgaria, the rich food and friendly locals have left us with just enough of a taste to make plans to return for spring surfing! 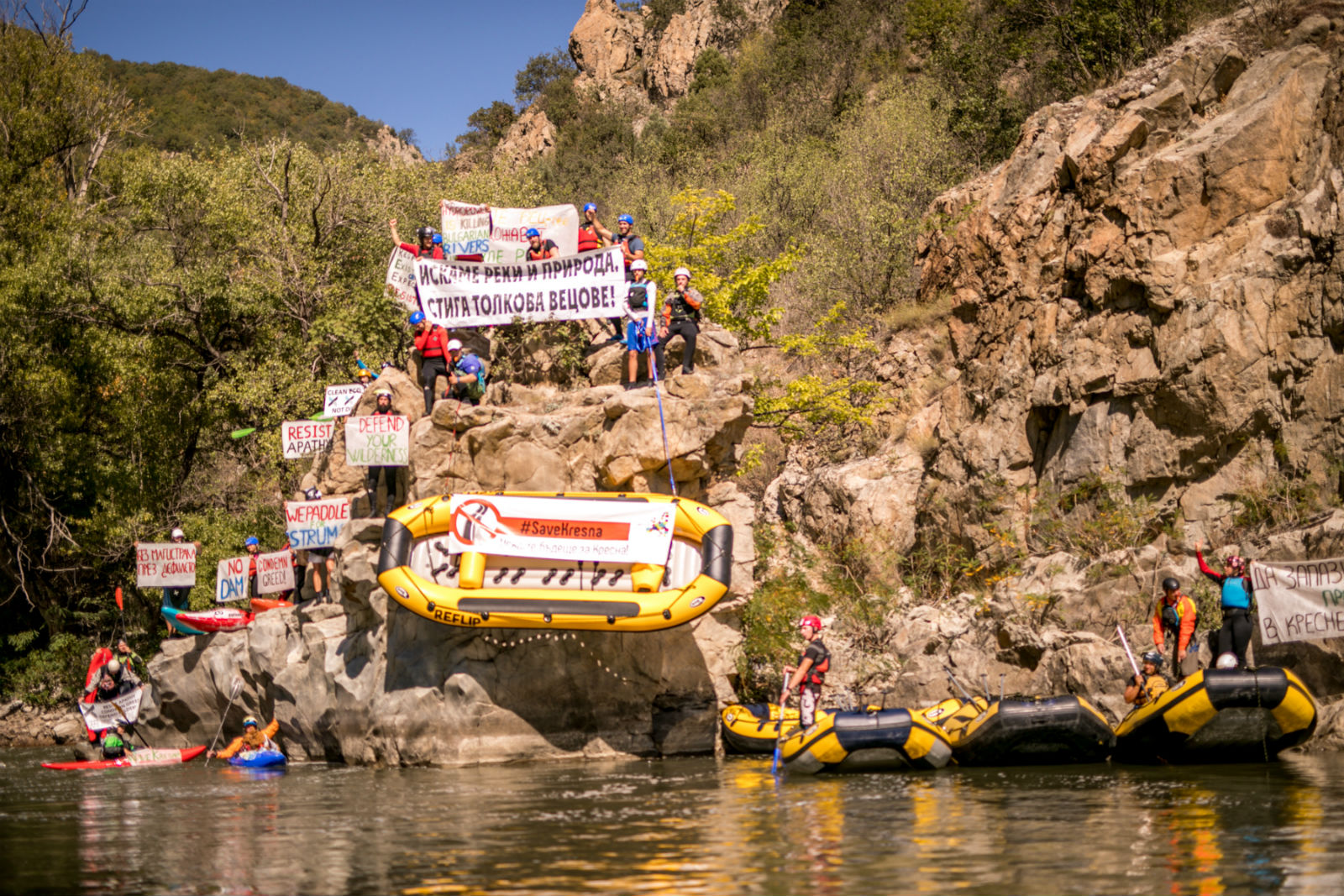 Writer’s Note: The Kresna Gorge has seen its share of struggles, and luckily, triumphs as well. In the early 2000s, “Let There Be Struma” was the slogan for the kayaker-led movement to stop the construction of hydro dams in the Gorge. The Bulgarian Kayak Society, in cooperation with rafting and environmental organizations, managed to stop the proposed projects which would destroy this whitewater playground.

Current threats come in the form of small hydropower projects on the tributaries of the Struma, industrial and mining pollution from coal and gold mining upstream and the extension of a European motorway through the Kresna Gorge that would connect Vienna to Athens and in the process destroy the biodiversity and peace of the Kresna Gorge. Dedicated locals are fighting valiantly to keep the motorway out of the gorge, proposing alternative routes that would leave the valley and river as is, a place of refuge for animals, amphibians and fish. Follow their campaign: #SaveKresna