The Teva Mountain Games was our second event in CO. The water was low, but there was just enough to put on all the whitewater kayaking events. The only event that was canceled was the SUP race.

The Vail playhole was quite shallow and required a fair amount of customizing before it was competition ready. At normal flow the hole is adjusted by air bladders located just upstream of the feature, but at this low level the bags alone were unable to shape the feature effectively. Quite fortunately, the good folks at the Vail Village Foundation granted permission for freestyle organizer Clay Wright to use plywood and other materials to squeeze the flow into a workable freestyle surf hole, and with the tireless assistance of Steven Wright, Jordan Poffenburger, Billy Maleski, Judd Kaiser and Claire O’Hara, a very usable feature was gleaned from the Gore Trickle. Huge ups to the feature team for getting the hole sorted out!

The freestyle event went exceptionally well. Prelims took place on Friday with 10 women competing for 5 spots in Saturday’s finals. Claire took 1st, Haley 2nd, myself 3rd, then Adrienne and Courtney to round out the top five. The men’s class had about 27 competitors, give or take a Billy Maleski, and cut to 10 for semis and then 5 for finals. Making the final cut for the men’s division were Stephen Wright, Dane Jackson, Dustin Urban, Eric Jackson, and Greg Parker, who had not done any freestyle in several months but looked as sharp as ever.

Saturday provided a painfully early start for those who entered the downriver race, scheduled for 8am and starting about 20 minutes late. This race is extremely stacked due to its role in the TMG “Ultimate Mountain Challenge”. The Gore Creek was still quite low for my boat selection, the Wave Sport Momentum, which excels in class III/V whitewater but has a little too much rocker for the flatter class I/II water provided on race day. I still felt confident that I could do well since I’ve been training in wildwater most of the season.  I made a few costly mistakes and spent most of the race fighting the boat to keep it on line. It was the hardest 3-mile race I have ever done due to the elevation (~eight thousand feet) coupled with the low, slow flow. I finished in 5th place among the women, but felt like I could of been much faster.

The freestyle finals on Saturday started at 4:15, so I had some time to hang around after the downriver race. I helped out at the Wave Sport booth talking boats to people and playing corn hole. Then I headed over to the Maui Jim booth for an interview to be put up on the Maui Jim website and chatted people up about how great Maui Jim sunglasses are. I also walked around and got to see the other events that were going on like the climbing and biking. Jeff had a bad toe so he wasn’t doing much walking. His toe is finally starting to get better.

It was finally time for finals but then we had a weather delay because of lightning. During the break, I did a bunch of practice rides and got really cold and tired – probably not the smartest thing to have done, but when do I do smart things?  We had 3 rides each and only one counted. My rides got progressively worse – I’m guessing because I was tired and cold. Claire pretty much wrapped up 1st place on her 1st ride with like a 660 point ride, which was super impressive for the feature we had to paddle in. It pretty much came down to the last rides of the four of us to see who was going to take 2nd and 3rd. Haley wound up taking 2nd with a huge air loop and space godzillas and Courtney 3rd, then Adrienne and me. Luckily, we all won prize money! I love events when top 5 wins money! In the men’s class Stephen took 1st, Dane 2nd, Dustin 3rd, then EJ and Greg.

We didn’t make it out Saturday night, which is strange for us. I was ridiculously tired, and with Jeff having a bad toe, we stayed in for the night. I slept for like 10 hours, which was exactly what I needed. Sunday was the 8 Ball Sprint, which is such a great event to compete in. Who doesn’t want to sprint down a short course with 4 other boaters while “8 ballers” in kayaks and rafts try to take you out?  I had 3 other women in my heat, and once the chaos started and the 8 ballers started attacking us, I was able to break away. I thought for sure I was going to make it under the bridge first, then out of no where I got T-boned into a rock and was stuck! My dream of an 8 Ball finals this year was shattered, but I’ll try again next year!

Looking forward to next year! Next up is the Lyons Outdoor Games!

Here’s some photos of Team NRS getting after it at the TMG! 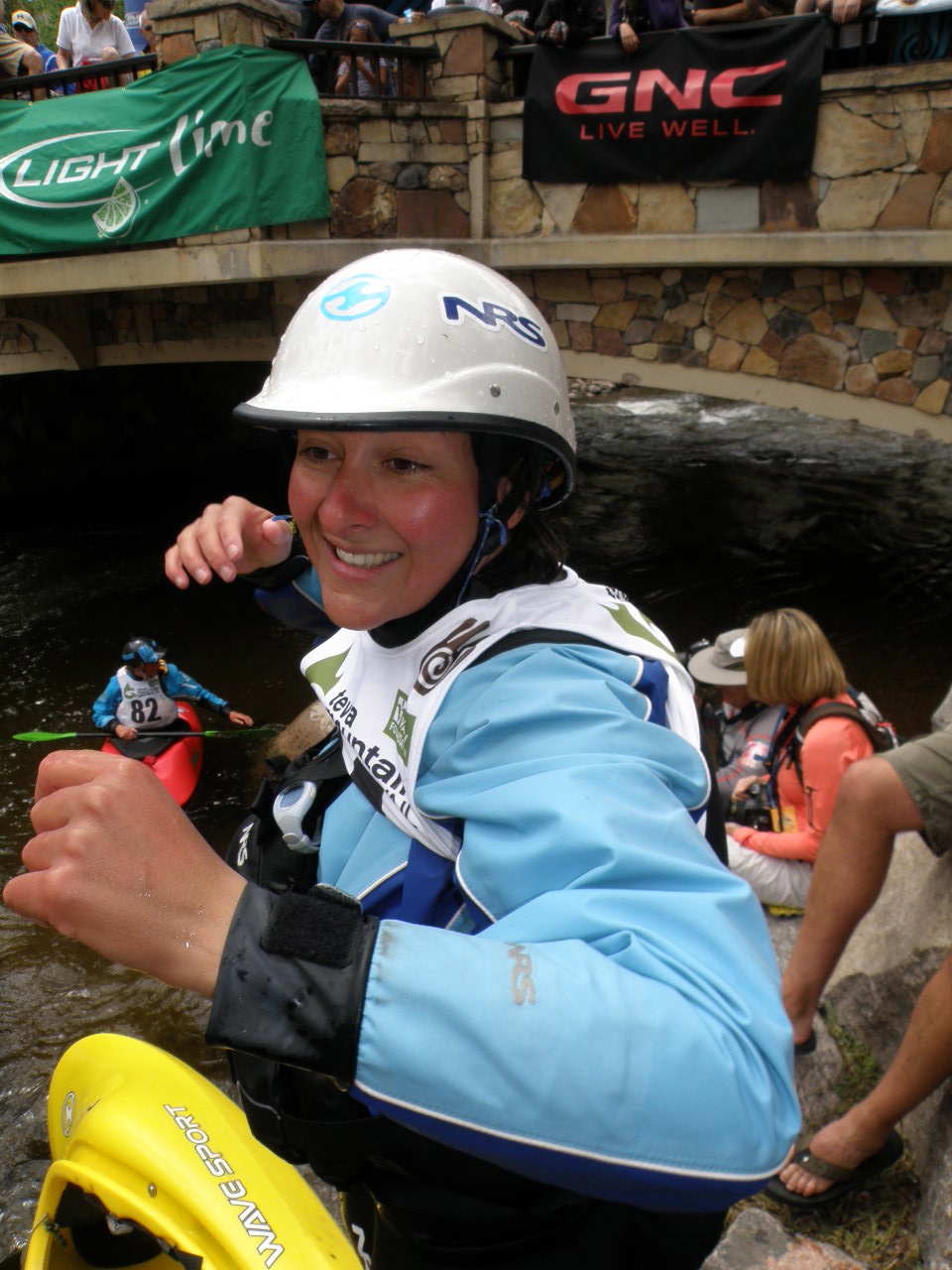 Till next time,
Elaine Campbell