Surfing Garb on the Ottawa River

Ride along with Team NRS paddler Erin Clancey as she embarks on a fall kayaking odyssey from Idaho to the east coast.

I left Moscow, Idaho on July 30th of this year and headed east across North America. My plans were to surf on the Ottawa, head south to Tennessee and North Carolina to compete in the Freestyle World Cup, and then spend some time on the Gauley River in West Virginia. I met so many wonderful people and got to paddle so many more rivers than I anticipated that I didn’t end up returning back to Idaho until late November. 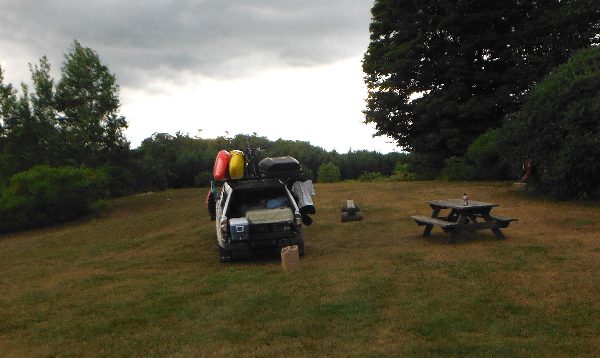 I loaded up my truck and headed east. It took me almost five days to get to the Ottawa from Idaho, with a few stops on the way. I spent two weeks surfing Garb and Push Button with warm water and weather.

After the Ottawa, I made my way south with Elaine Campbell and stopped in upstate New York to stay with Elaine and Jeff at their cottage on Lake Ontario. I got to go water skiing and sailing on the lake, and Elaine and I made a day trip to the Raquette River. The Raquette is a great run!! It’s pretty steep with a few really great slides and drops.

From New York, I headed to Rock Island, Tennessee for the first event of the World Cup. The Freestyle World Cup consisted of a series of three events at Rock Island, the Pigeon, and the Nantahala (NOC). I finished in 5th place at the Rock Island event, and then my standings deteriorated as the event continued (12th and then 17th).  Still, the whole event was great, and it was good experience to compete under the international freestyle rules. 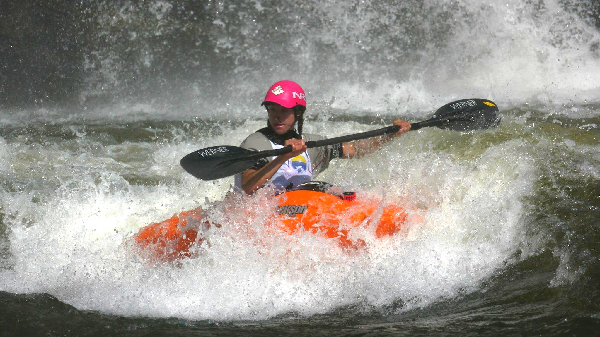 I thoroughly enjoy creeking, but until my east coast tour I considered myself primarily a freestyle kayaker. After the World Cup, I spent most of my time river-running and creeking. I spent more time in my creek boat (and swimming out of it) than I ever have before. I got to run many new rivers and drops, such as, the Raquette, Green, Russell Fork, Moose, Watauga, Tallulah, and Great falls on the Potomac. I also spent three weeks in West Virginia on the Gauley and New rivers. Gauley Fest was a blast, and the runs on both the Gauley and New offer some of the best downriver playboating I have ever done!!

In between Gauley releases I went to Washingto D.C. to visit my aunt and uncle and run Great Falls on the Potomac. I made two friends while paddling on the Gauley, Louise Jull and Katrina Van Wiijk, who also went with me to Washington D.C. to visit a friend and paddle on the Potomac. I ran both the Virginia line, Spout, (photo below), and the Maryland line, Pummel. Great Falls were probably some of the biggest drops I had ever run, and I even ended up with a black eye in the rapid below Pummel on the Maryland side.

In my four months back east, I always found myself going back to Asheville, NC and running the Green River Narrows. The Green is one of the most technical creeks I have ever run, and since I got to know the lines really well, it greatly improved my creeking skills. I got to run the Green at all different levels from low water all the way up to 200%. I was also in Asheville for the Green Race. The water was pretty high for the race, and I did not race, but I paddled in, and it was one of the best kayaking events I have ever been to!!

Although the Moose River is all the way in upstate New York, I figured I should go to Moosefest while I was on the east coast. The rapids on the Moose are super fun, with friendly waterfalls and slides, and with big pools between drops. Moosefest is pretty much a downriver race on Saturday, awards at Mountain Man, a party at the bar in Old Forge, lots of paddlers on the river, and a good time! The race goes from Agars Falls to the pool below Crystal. Agars Falls is a ~15ft drop that lands right above an easy, but fun and fast, slide. The last, and biggest, drop is Crystal, right above the finish line. I ran the river on Friday and Saturday morning and then raced on Saturday afternoon, and won the women’s race.

After Moosefest, I went up to the Ottawa to surf Garb and Corner Wave. For two days Garb was outstanding, giving up huge air!! I got my first even pan am and aerial clean blunt! Then the water level came up, so I surfed Corner Wave for the next two days until I couldn’t move!!

After the Ottawa, I went to the Russell Fork race in Kentucky and then back to Asheville to run the Green and surf at Eternity Hole. The weekend after the Green Race, the Tallulah started releasing. The Tallulah is a deep, beautiful gorge in northern Georgia. The rapids are much easier than the Green (I did the run in my playboat), but Oceana Falls is still big, fun, and fast! The Tallulah is a good example of how different it feels to go creeking in the southeast vs. Idaho and Montana. There are tons of kayakers!!! We had to sign an AW release form and wait in line to put-in. At home in Moscow it seems like I’m always looking for, or begging, people to go kayaking with me. On the classic runs in the southeast you have to dodge other paddlers on the river instead of wood.

By the second week in November, I decided that I should start heading west. I drove from the Tallulah back to Rock Island, TN for some playboating with the Jackson family and fellow Jackson team members. The water was running at two generators. I was having so much fun hanging out with everyone, and the weather was so nice that I couldn’t help but stay and paddle for the next week. 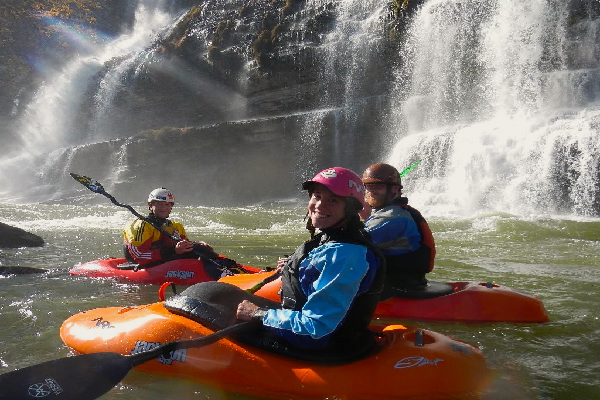 The Sunday before Thanksgiving, sadly, I decided that my time out east needed to come to an end, and I headed west.

This is the road trip summed up with the places I stopped along the way:

Kayaking back east is super fun, but Idaho and Montana will always be home!!

It’s good to be back home in Moscow, but I can’t wait to head back out on the road again next spring!! I hope everyone has a great winter!!!