As Oarlock Turns Part 8: A Final Cup of Joe

The current slowly pushes this rubber craft downstream. This 20-year-old raft has seen more miles on the Middle Fork than I will probably log in my entire life. And, at this particular moment, we’re headed toward a smorgasbord of rocks to wrap, or at the very least, to booger upon (i.e. get extremely stuck). 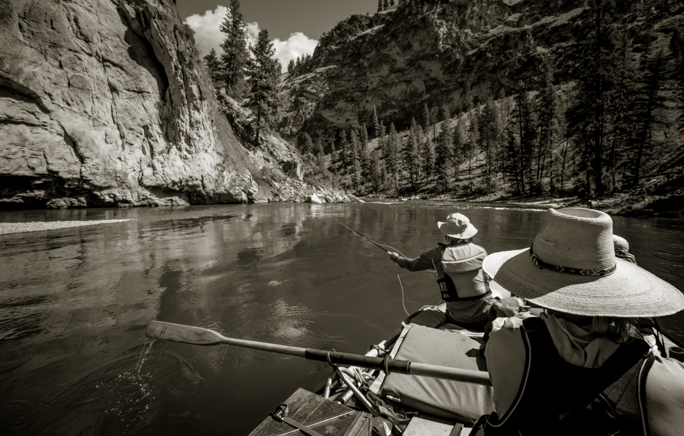 I float past Todd, my longtime kayaking partner and our most recent addition to the crew. He’s “boogered” in more ways than one, playing cat’s cradle with one of our client’s fishing lines. I have seen this particular “fly-fisherman” wrap his line up at least a half-dozen times today, leaving Todd to untangle, cut, retie, remove, un-knot, count to ten, breathe and re-affix. As Todd’s bubble of patience is about to pop during deconstructing rat’s nests and answering a bombardment of senseless inquiries about how deep the water is, the second fly-fisherman sends a ‘Chernobyl-hopper,’ with a shiny new hook on it, right into Todd’s ear. POP! The exhale of patience is visible.

I wince from afar. Then smirk, thankful that I’m nowhere near the mess. 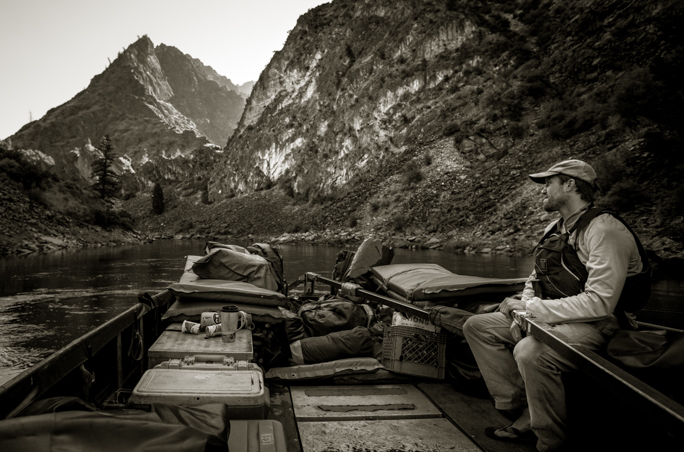 It’s the final trip of the season. As far as the river is concerned, the Gods of flow have been merciful, holding levels just above those found in the Atacama Desert. We began deadheading in mid-July, which means that our daily lives have been blessed by the Middle Fork of the Salmon a total of 84 consecutive days. We are fortunate to spend nearly every day on the river in a summer that most people wait decades to float upon for six. Some may even say we’re spoiled. 84 days. Easy, right? Absolutely not. Worth it? No doubt. Slowly but surely, the ratio of consumed cocktails per day compared to the beginning of the season has increased ever so slightly. A master’s thesis in the making?

Change of season is in the air. Autumn is seeping into the leaves of every deciduous plant. One can feel it in the crispness of the morning air and see it in the increasing number of dishes done by headlamp. Duffel bags begin to thicken. As the light of day dwindles, the number of down jackets, long-underwear, and warm sleeping bags rise. 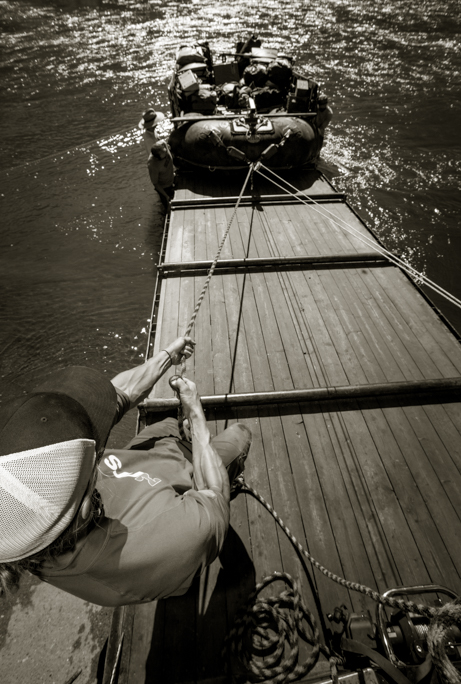 The final burned cup of coffee for the season never tasted so good. The 20-year-old thinly worn tubes massage the concrete at the takeout. Clyde is packed up. Agatha, the sweep boat, is winched onto the trailer one last time. Squeeeak. “Please dear GOD don’t let the metal-cable winch snap.” A breath of accomplishment as the final trip of the season comes to a close.  Last week, one of our aluminum metal dry boxes full of wine flew from the top of the truck. I hope everything got tied down this time. I don’t think I have the energy to deal with another catastrophe like that. Better double check it. 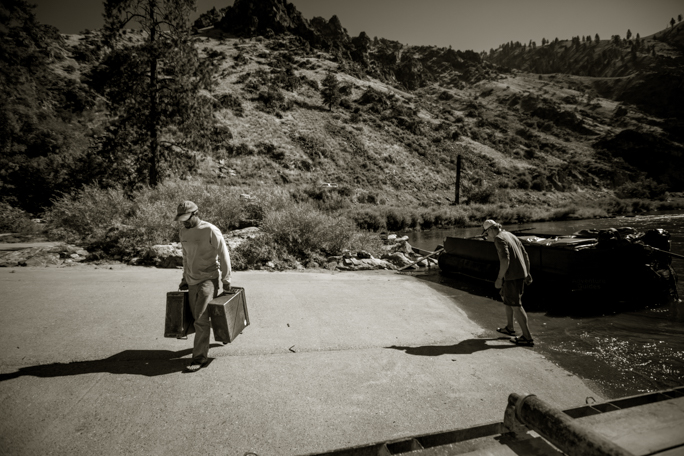 The five hour drive back to that place where it all began, Stanley, Idaho, where the headwaters gather, where nomadic guides congregate as snow melts in June, is a mixed bag of emotions. As our gaze turns toward the confluence in passing, you can feel the sigh of relief from everyone that comes from being done with what feels like a huge accomplishment. With a total of 1100 miles of Middle Fork that breaks down to 11 rigs, de-rigs, repacks, re-pumps, dead-heads, redemption runs, river patch jobs; and 11 times five equals 55 games of roshambo resulting in 55 sloshing groover dumps. There is something else intertwined with this sigh though. It’s a type of sadness that comes from leaving a place so intertwined with one’s life and passion. A depart from leaving this sense of meaning. 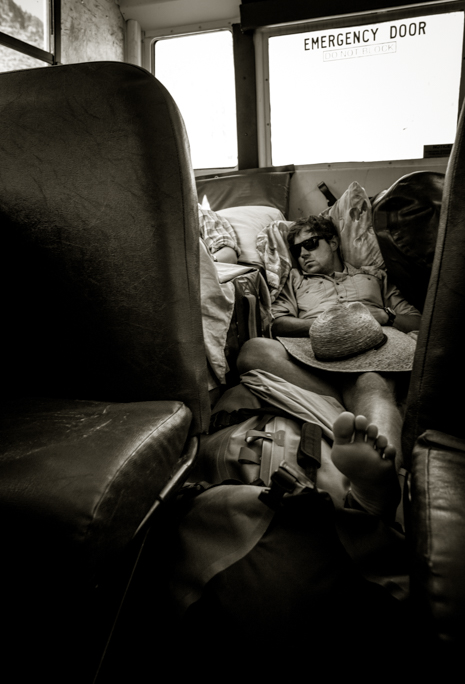 We had our trials and tribulations. We had our fair share of meltdowns and emotional crackups, magnified only by the fact that, as guides, we spend more time with our friends than a family spends together on a cross-country road trip. I have never seen anyone want to bash in another person’s skull on account of improper dishwashing etiquette—at least not until living and working with the same six people for over 100 days straight. At the same time, like a brother or sister, these are the events that make us love or hate (or both), one another on some strange and dysfunctional level. Fluctuating in and out of each others’ lives, our guests have been along for the ride. Or is it the other way around?

Now, it’s back to the warehouse, where Randy the Handy awaits with a six pack of tall boys and a mess of gumption for cleaning up and closing down shop for the winter. With the help of the guide team, every boat will be inflated, cleaned, 303’ed, tubes filled with talc, and stacked to the ceiling for storage. Every oar will be re-lacquered, each hole will be patched and each frame fracture will be welded. Spa day for river equipment. Unfortunately, Parker, our youngest crew member, has gone back to school for the fall, meaning one last roshambo for who scrubs the groovers with a toothbrush. 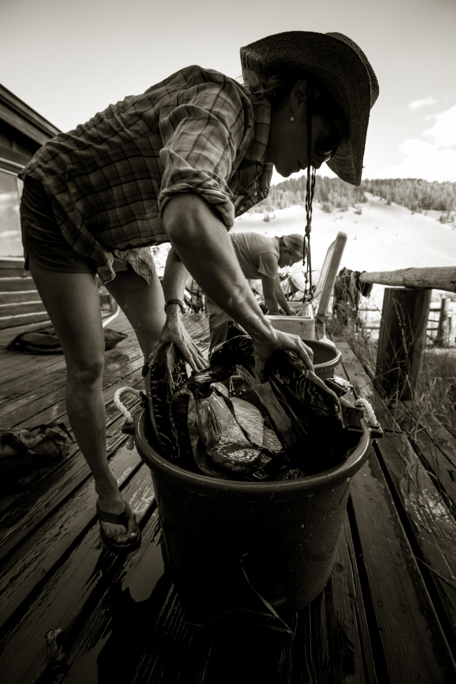 Clyde, the F-650, backs in the over-sized trailer with Agatha shining, a freshly laid coat of 303 upon her black, three-and-a-half-foot diameter tubes. Jingling keys are stored on the wall until next year. A solid thud sounds as the warehouse door slams shut against the cold concrete. Group hugs, always. Snow has begun to dust the jagged Sawtooth Mountains. Rust buckets roar to life with the turn of ignition switches. Rigs are packed tight with river equipment, musical instruments, rocket boxes and whatever driftwood and fascinating rocks that have been squirreled away throughout the season. Next year’s snowpack has begun to ascend just as the nomads that will chase its descent in the spring, flee the valley. A perfect cyclical motion. Thank you Idaho. 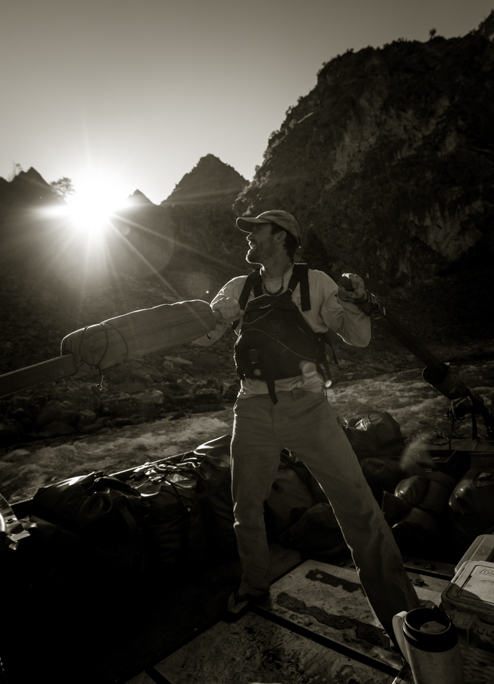