The Art of Reading Water

Scouting is not just about figuring out where to go, but also how to get there.

The river is cold and clear, radiating with hues of emerald green. As it cascades over small drops, ribbons of white bubbles rise from the depths, crashing, colliding, rolling, and toiling about each other before falling off a five-foot ledge into a narrow chute. The resulting froth surges and recedes with no semblance of order or sanity. Then it converges between two boulders and dissipates into a large pool. 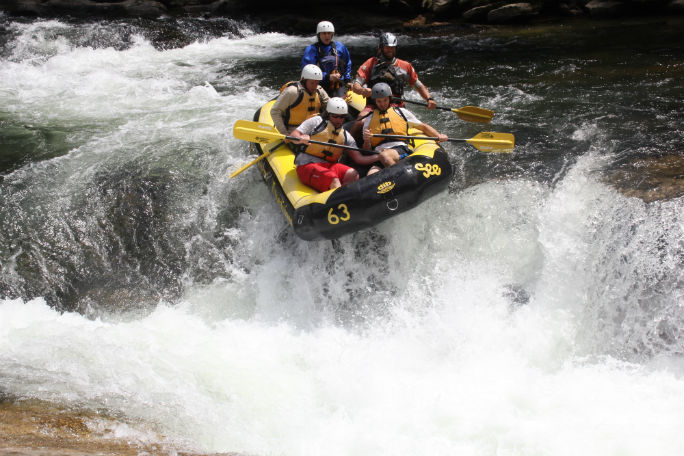 The rapid is Bull Sluice, and scouting it with me today are young men and women training to be raft guides on the Chattooga River. At low water, “The Bull” has a technical approach leading into a steep, rocky drop. And at high water, it’s comprised of big waves and strong currents, culminating into a raft-flipping hydraulic. At all levels, it’s a difficult rapid for both novice and experienced paddlers; however, the fact that it ends in a calm pool filled with sunbathers, swimmers and pets makes it a forgiving drop and a great section of river for rookie guides to spend their summer.

This is the last day of guide school, and by this point, all the trainees have scouted this rapid numerous times and most have guided it at least once. But today the plan is to run the rapid over and over; portaging rafts back up to run it again, getting everyone to a comfort level where panic doesn’t govern actions.

We make our way across a side channel to a pothole-riddled island in the middle of the river, about twenty yards above the main part of the rapid. In order to successfully navigate the class IV drops at the end, the guides have to learn to negotiate the class II approach in the beginning. But they also need to recognize that, as with any long rapid, there is ample opportunity for damage control if they get off to a bad start.

From our perch we dissect the rapid, identifying every rock, eddy and drop that will influence our line. Since rafts are wider and less maneuverable than other craft, guides need to take advantage of the currents backfilling small eddies and hydraulics to pull the raft one way or another. Although Bull Sluice’s size is intimidating, its currents chaotic, there is an order to this elixir of rocks and water, rules and laws by which all rivers abide. But to the novice guide, deciphering a river’s habits is akin to studying the alchemy of magic, and its dialect is as foreign as any tongue.

The folly of many beginner paddlers is that they merely look at rapids as a collection of obstacles they need to avoid, and their only strategy is to paddle hard to get around them. When scouting a rapid, a rookie guide may say, “I want to take the middle chute, miss a rock on the left, take a left turn, and miss the hydraulic on the right.”

But a more experienced guide will look at the same rapid and say, “I want to take the middle chute, catching a little of the right eddy to get around the rock on the left, then use some of the eddy behind that rock to pull me away from the hydraulic on the right.” The difference is that the seasoned boater is looking for river features that will take the raft where it needs to go, knowing that for every place the river is pushing the raft into a hazard, somewhere there is a current that will take the raft away from that obstacle.

Even when these men and women complete their training and begin working as guides, they will not be fluent at reading the river. However, by immersing themselves in its waters, sometimes quite literally, they will come to understand its nuisances in much the same manner as language students benefit from spending time abroad.

Once we are through studying our route, the group heads back to shore. I hop in a raft with four trainees, letting one of them take the guide position in the back, while I sit in the middle and try to be an obedient paddler. The trainee guiding the raft meanders us around shallow rocks, calling strokes in increments so as not to overshoot our line.

As we approach the narrow hallway that leads to the final drops, muscles tense. Paddles rise. Arms cock like the hammer of a gun. But the raft is where it needs to be, and the guide does not call any commands. She knows that if she gets back in the main current too soon, the raft will hit a rock on the left, causing it to spin into the next section out of control. So she rides the eddy line on the right, letting the slower current behind the island pull the raft into position and slow our momentum.

The river constricts into a tight channel, and the guide gives the raft a little left hand angle before we hit the first small wave. An eddy on the right catches our right tube and lines us up for the next wave pointed downstream. As we go through the final wave, we need to ride the eddy line on the right, without catching so much of it that it turns the raft sideways. But this time the guide hesitates too long, and we are locked into the main current, drifting towards the steeper part of the drop. In order to get back on her line, she turns the raft perpendicular to the ledge and calls, “All forward.”

Paddles move in unison. The raft accelerates. But we only get in a couple of strokes before she yells, “Get down.” 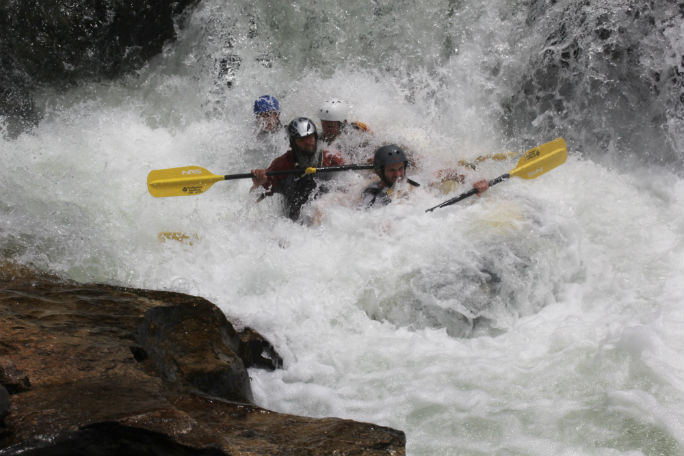 The raft drops over the ledge and buckles when it hits the backwash. Bodies, paddles, and helmets crash against each other then recoil as we surface upright. The guide is catapulted across the raft, but she has just enough time to scramble back into position and line us up for the narrow exit chute that leads into the final pool.

As she steers us into an eddy along the shore, she smiles, knowing that she has underestimated the strength of the current. It’s a smile, which signifies her humility, a smile that even experienced paddlers, like myself, often wear.

The river is a powerful force with its own agenda. If it meets resistance, the river goes over, around, or through anything that’s in its way, violently eliminating some obstacles; gently eroding others with constant caressing. If you guide long enough, you eventually learn to either use the river or get abused by the river. The idea of conquering it is a macho misconception. The river does not consider us to be an adversary, merely another obstacle, and that is why it always wins. Watch a good boater grace their way through a class V rapid, and it becomes apparent that running whitewater is not a battle but a dance.