Thousands come together to share the power and beauty of the birthplace of the Trancura river in Puesco, Curarrehue, Chile. Although commercial interests threaten the flora, fauna and the culture of the valley through hydroelectric projects, the PuescoFest community responds not with violence but with a celebration. PuescoFest celebrates free flowing rivers in Chile and in the whole world.

Sunrise over the iconic granite towers known as the “Peinetas,” or “combs.” In the Mapuche language they are called, “Millaillifen,” which can be loosely translated to a place of “treasure.” There’s gold in them hills! 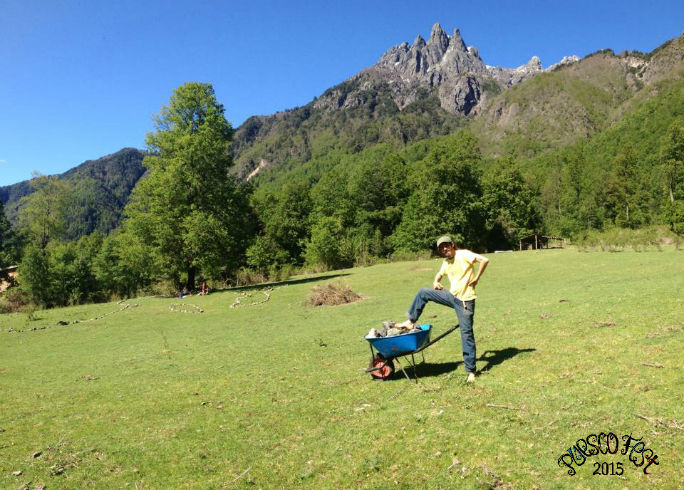 Tirso Urzay is a father, a carpenter and the official “Vibe Amplifier.” Tirso is one of many volunteers crucial to the production of the festival. Here he is standing happily barefoot after helping to clear nearly 2.5 acres of blackberry bushes for the new and improved PuescoFest camping area for 2015.

PuescoFest is more than just kayaking and music. PuescoFest is community. The passion for rivers drives us all to work together.

Festivals and races have always been a great way to create and maintain community in the the whitewater world. These are the brave souls who have come together from all over the world to fight for the rivers they love while battling their way down one of Chile’s most challenging sections of whitewater on the Upper Puesco.

Tres Troncos provides the perfect arena for spectators, and this motivates more people to kayak every year. More kayakers equals more defenders of the rivers of the world.

Most Chileans know him for his super star status on national TV, but Pangal will always be a river rat to us! Pangal and his family are carrying the torch not only in kayak races, but in the fight for their home river, the mythical Maipo. NO ALTO MAIPO!

Momo Castillo has become a household name in the whitewater racing circuit. He cut his teeth here on the Puesco and other rivers around Pucon and Curarrehue. Momo styling the “Jah gate” on his way to the finish line.

Rain? Snow? We love the water! Can you believe people want to destroy this? We can’t either.

The “champion’s shuttle,” a contemplative walk back to the top of Tres Troncos for the final time trial.

“I choose to listen to the river for a while, thinking river thoughts, before joining the night and the stars.” — Edward Abbey

Let’s get together and feel alright. Let’s catch a dream.

Newen Afrobeat brings the vibes to Puesco for the second year. Newen means “power” in the Mapuche language.

Eliseo Epulef, Curarrehue local, plays the Trutruka, an ancestral Mapuche instrument, at the peak of the musical adventure.

“We don’t need to make a better future for our children, we need to make better children for our future.” – Jose Francisco Cali Tzay (United Nations Human Rights Council)

“Us kids love the rivers!”

We love the water, we love the rain, but we also love the music. Everyone’s dome away from home.

PuescoFest as an organization not only defends water, but the organic cultivation of our seeds and the food they produce. Like the heart-made, hand-made bread in Puesco.