A year ago, a few friends and I emerged from a cleft in the mountains outside of O’Brien, Oregon. Our attempt at paddling the upper reaches of Rough and Ready Creek had devolved into a spirit-crushing couple of days of hauling loaded kayaks through thick brush and over deadfall, with the creek always tauntingly in view—2,000 feet below. By our second night out, we had exhausted our water supply, and with that came the kind of soul searching that accompanies using stash beers meant for celebrations to rehydrate powdered chili and the next morning’s oatmeal. Was it not for the privilege of spending a few days in a beautifully remote place, I’m not sure we would have been tempted to return. 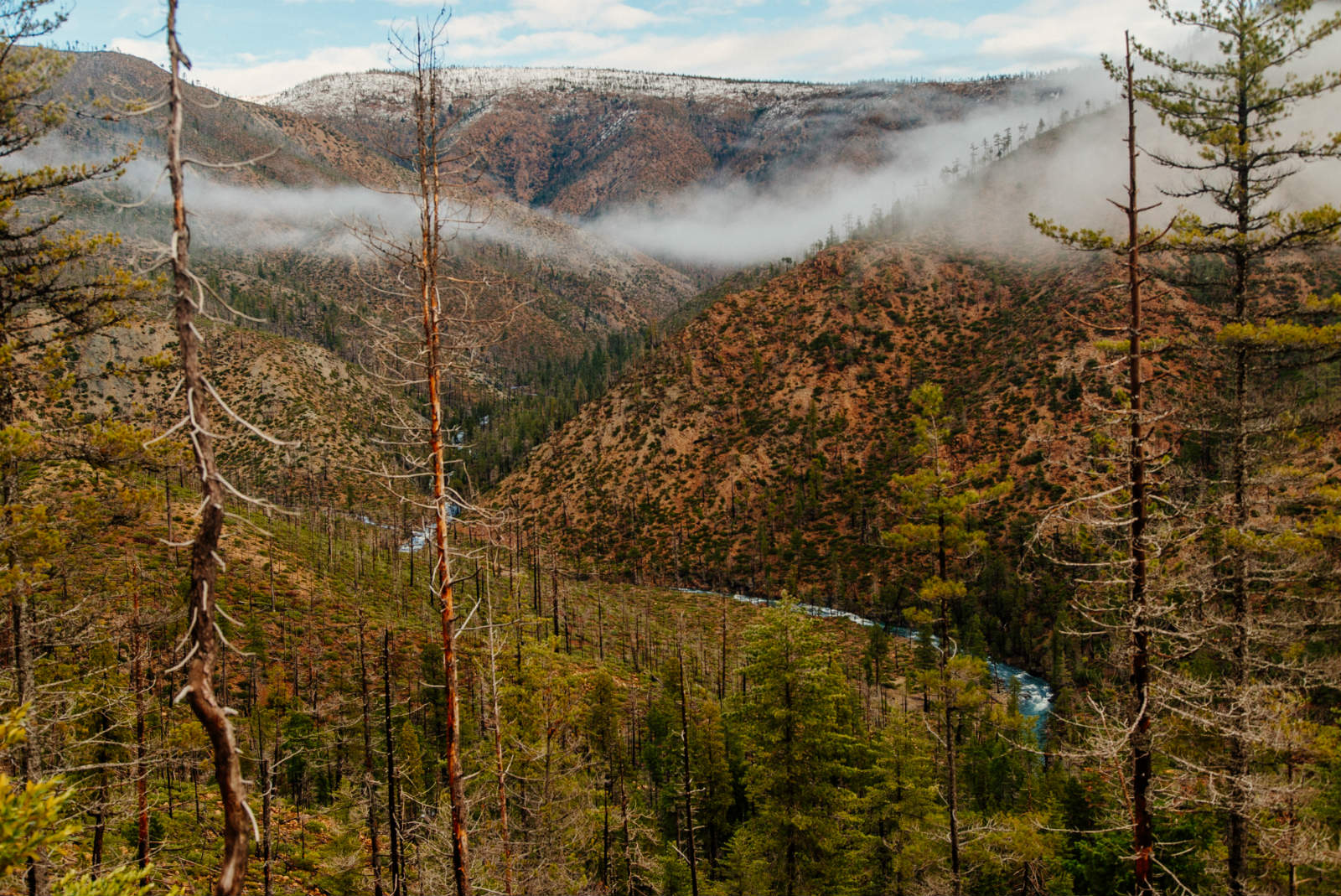 In the following 12 months, though, three things came together that made a second attempt at paddling the headwaters of Rough and Ready Creek once again appealing. The first was an alternative route. At the suggestion of a friend who had hiked there before, an old mining track from the 1950’s that once lead all the way down to the creek would be our new access point. The second was the abundance of precipitation that occurred through the recent winter, which might result in a higher base flow, meaning we wouldn’t have to rely on a heavy rain to navigate the unknown streambed. Finally, in the midst of an affliction that often accompanies wanting pretty things that are just out of reach, we mostly forgot the outcome of our last attempt. 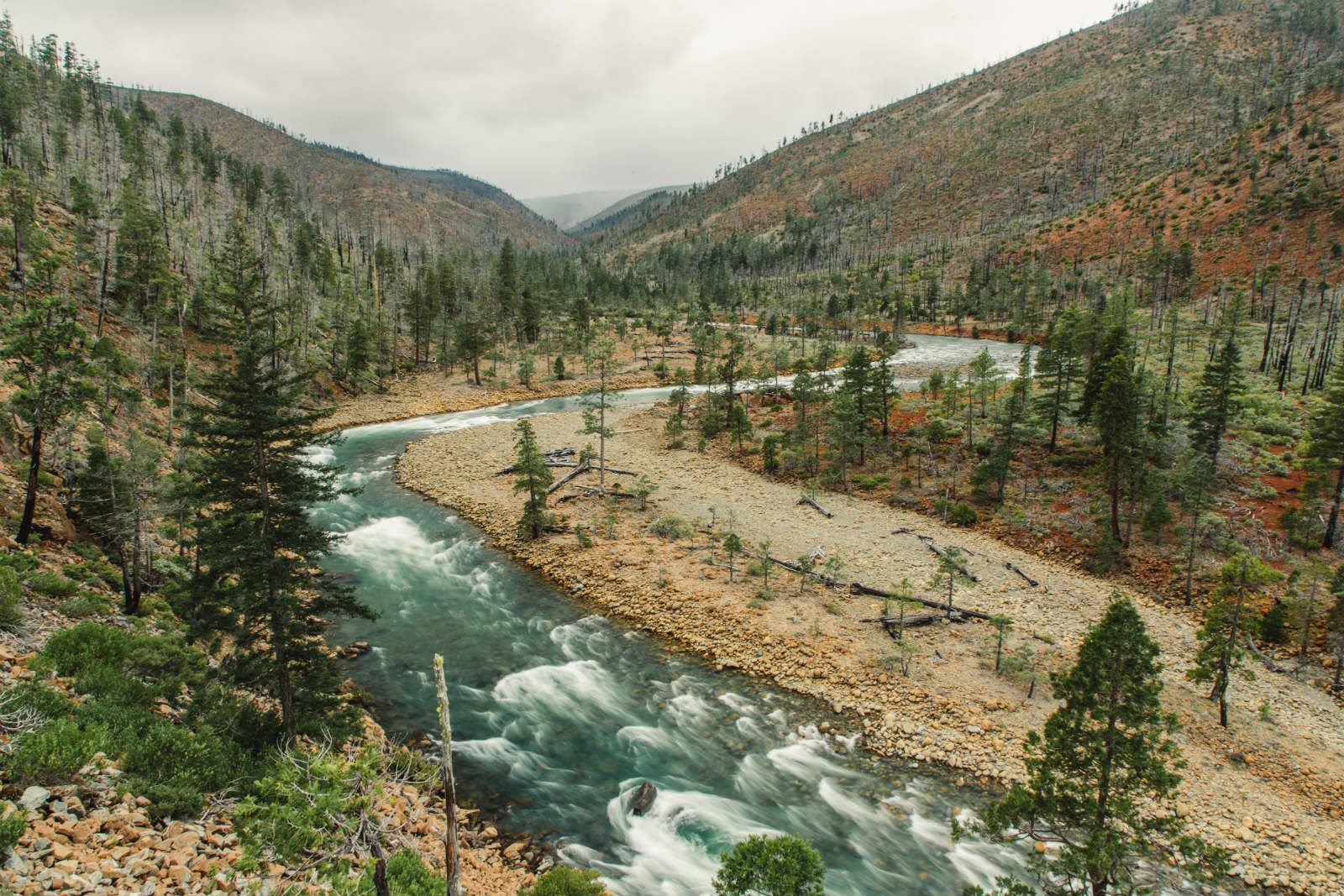 By the time Zach Collier and Ryan Saevitz of Northwest Rafting Company joined me in Southern Oregon, the conditions in Rough and Ready Creek were nearing perfection. A warm storm system had just wrung itself out over the mountains, rendering the need to bring snowshoes on our adventure mute. Because of that same storm, we also ditched a plan to use hard shell kayaks as sleds, and instead opted for more easily packable IK’s and a packraft. Soon enough, we were out the door, a fried breakfast in our guts, and on the trail. 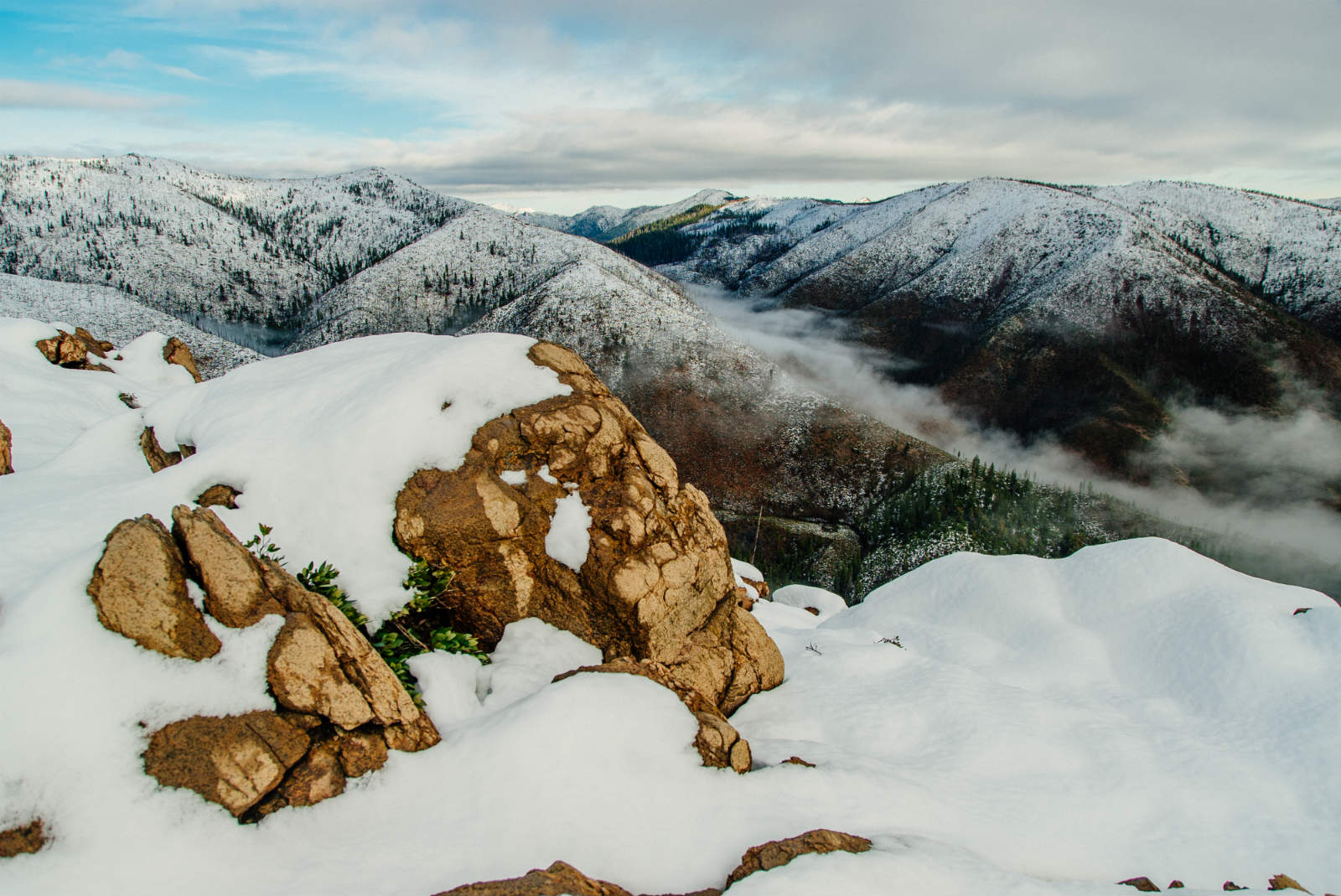 The beauty of the South Kalmiopsis, a road-less area just outside the bounds of the federally designated Kalmiopsis Wilderness is breathtaking and indescribable. Hiking along the spine of a ridge, we were awash in a sea of rugged mountains. Part of a rare outcropping from the Earth’s mantle that over time transformed into a serpentine rock type, the crumpled terrain is populated by a variety of rare and endemic plant species that are specially adapted to the region’s unique geology. We passed dwarfed stands of Jeffrey Pine and communities of a carnivorous pitcher plant, Darlingtonia californica, both able to survive in the nutrient deficient soils that keep other species out. 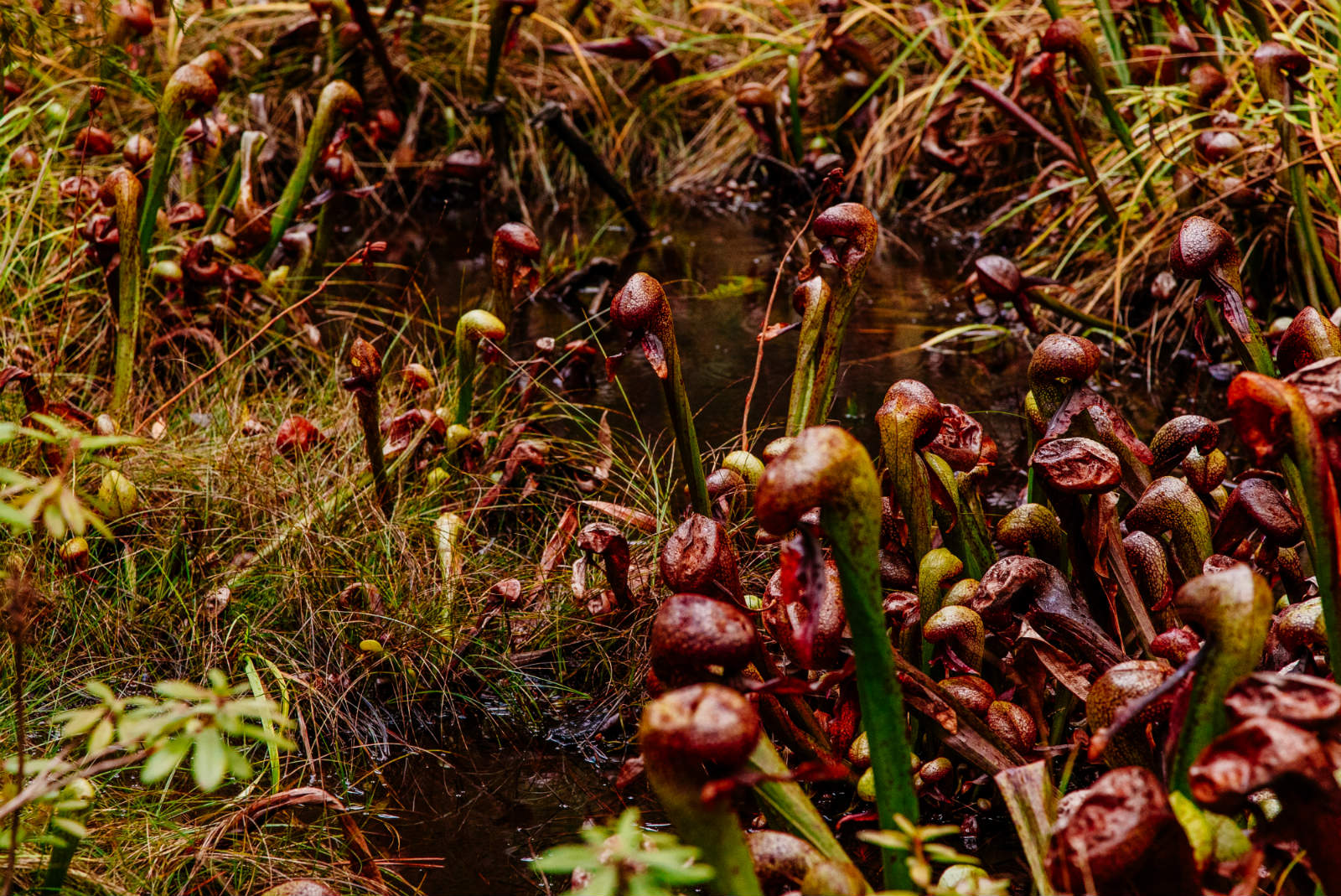 Heavy winter rains that fall on the sparsely vegetated terrain are quickly funneled downhill and go on to become some of the most iconic wilderness whitewater trips on the West Coast. Along our way, views alternated between Baldface Creek, a tributary of the Wild and Scenic North Fork of the Smith River, and into Rough and Ready Creek, itself a part of the legendary Illinois River watershed. Farther in the distance, a ragged line of peaks delineated the upper reaches of the Chetco River’s drainage. Tinged orange by rusted iron in the soil, the whole place felt more like the desert Southwest than the southern corner of Oregon we were in. 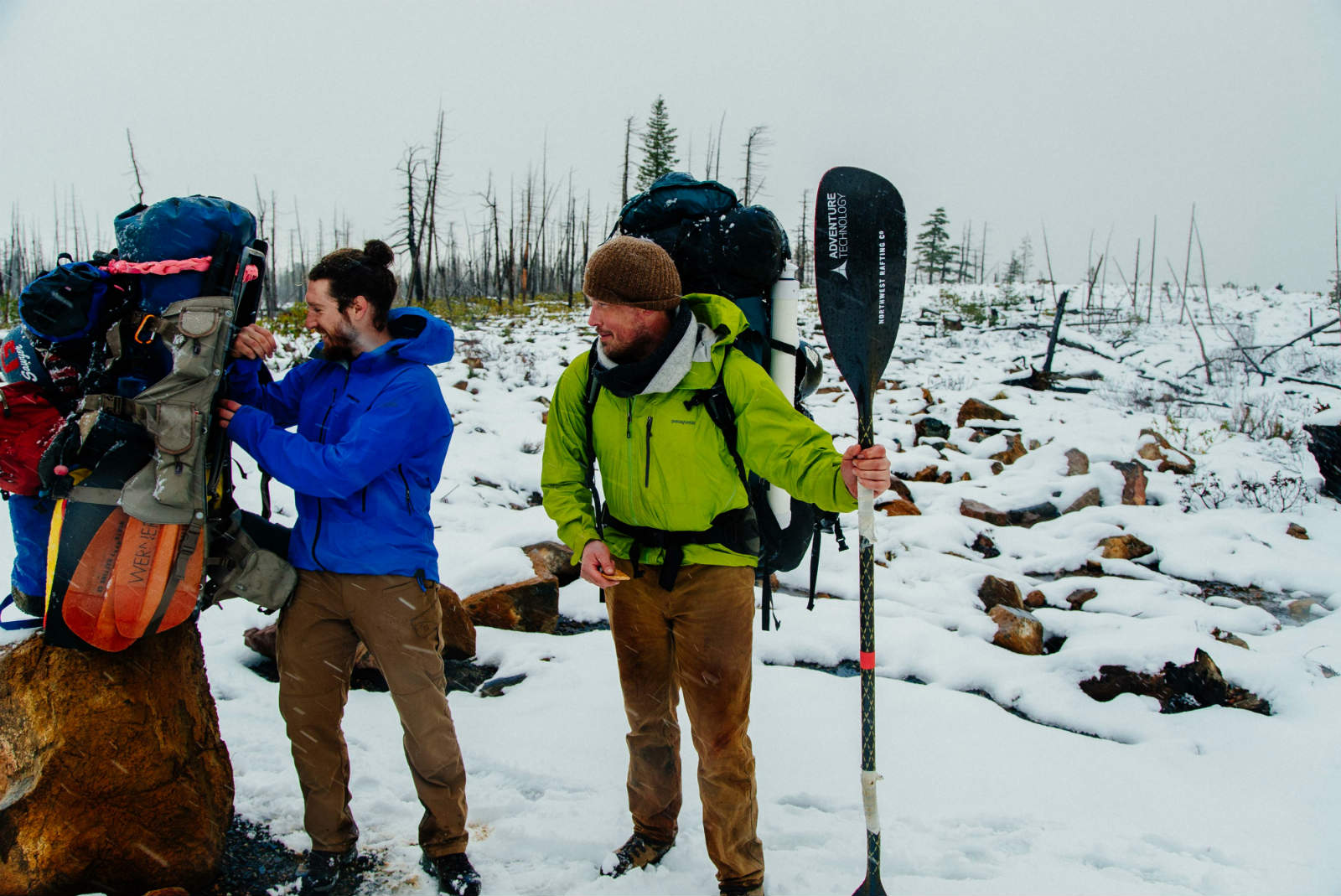 Our first night out, we camped at the junction of the Chetco Divide Trail where the faint remnants of the mining track led to the creek. Or so we were hoping. After waking up to an incredible sunrise and checking our location on a map, we opted to take a short detour to Rough and Ready Lake. Gaining elevation from our campsite, we encountered deeper snow and views that made the short stretch of post-holing more than worth the exertion. The lake, cradled in a shallow depression on a mountainside isn’t the farthest source of Rough and Ready Creek, but still offered another glimpse at the beauty we hoped to find downstream. 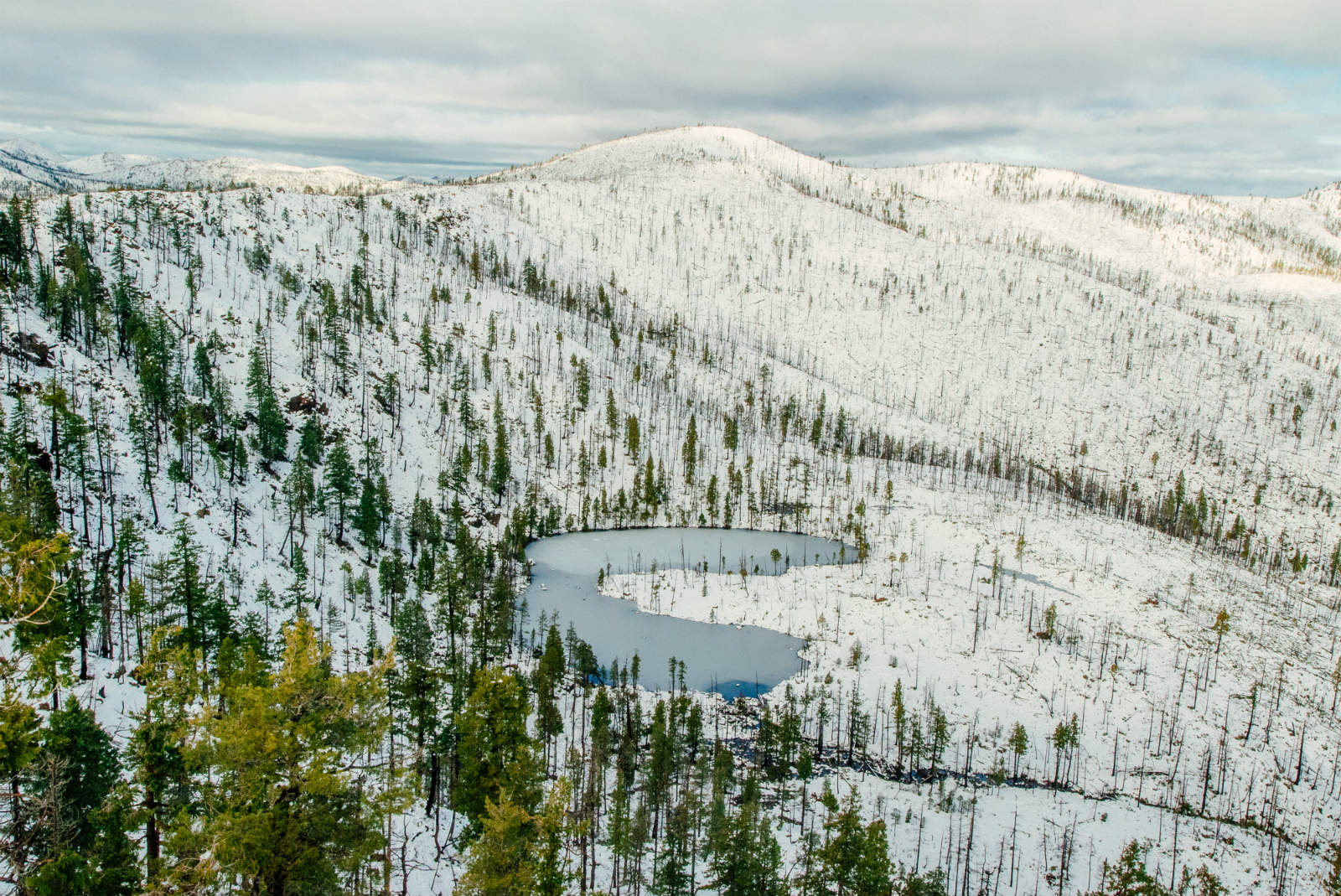 All the effort and failure in our previous trips to this region had been to try and uncover special places like Rough and Ready Lake. We wanted to know for ourselves and be able to share with others exactly what is at stake if industrial-scale nickel strip mines in the area are allowed to move forward. While it poses an existential threat to clean drinking water, fishing communities and recreational opportunities downstream, the mining would also irrevocably alter the landscape. From the construction of a network of dump truck haul roads, to the actual scraping away of a ridge top, the area in front of us would be transformed from untouched and pristine to a 24/7 industrial zone. 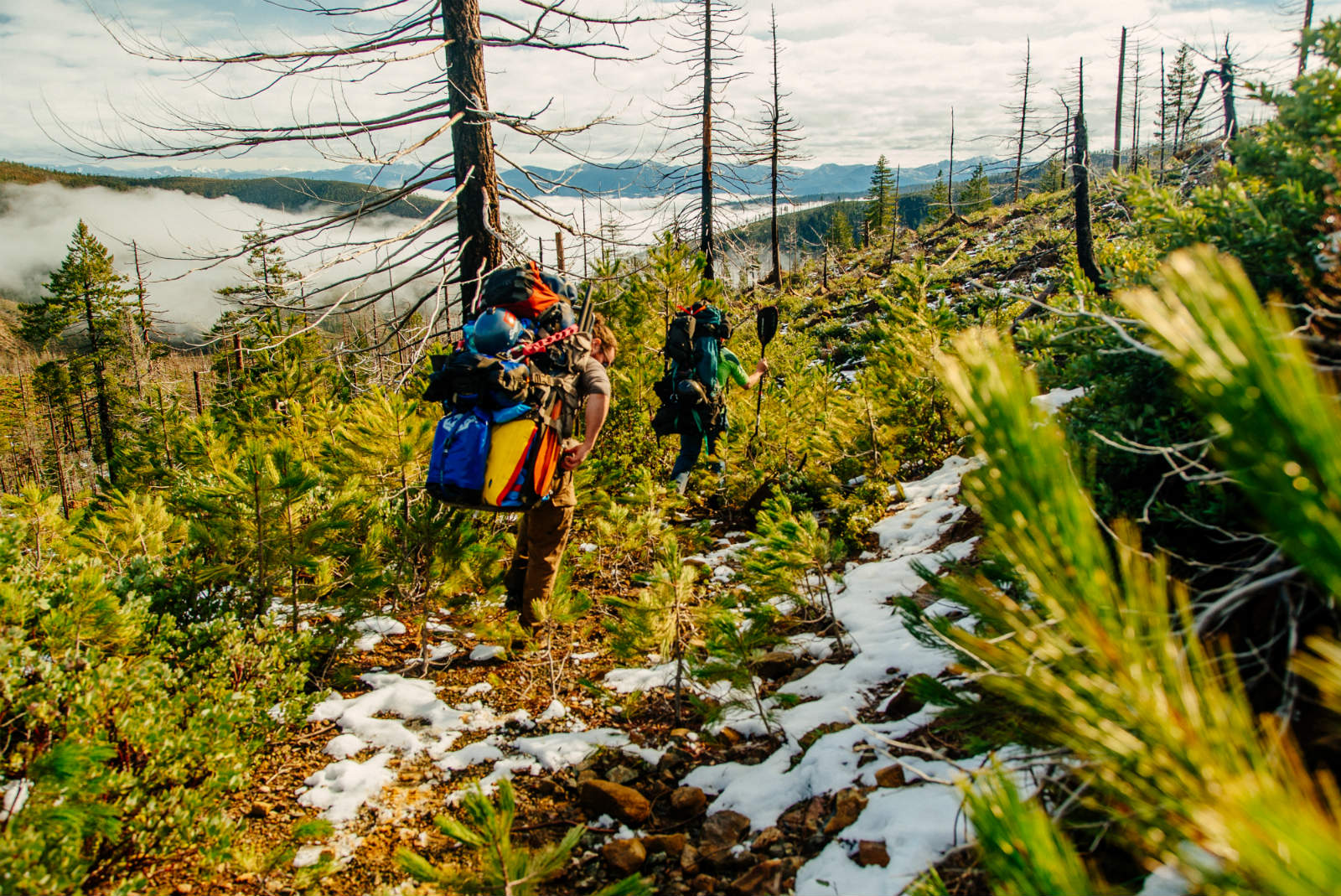 Shouldering our packs and continuing to the creek, we encountered stands of Port Orford cedar, a fire resistant species that thrives in the numerous bogs and wetlands we were passing. Following that old mining track on our descent, an old scar on the hillside, it was impossible not to think about how different the place would look if any of those old claims had panned out. Instead of struggling to follow an overgrown road, we could have found ourselves on a bare hillside pocked with toxic tailings ponds like the abandoned Glenbrook Nickel mine in neighboring Riddle, Oregon. Eventually, we lost the old road all together in the underbrush and were left to bushwhack the rest of the way down. 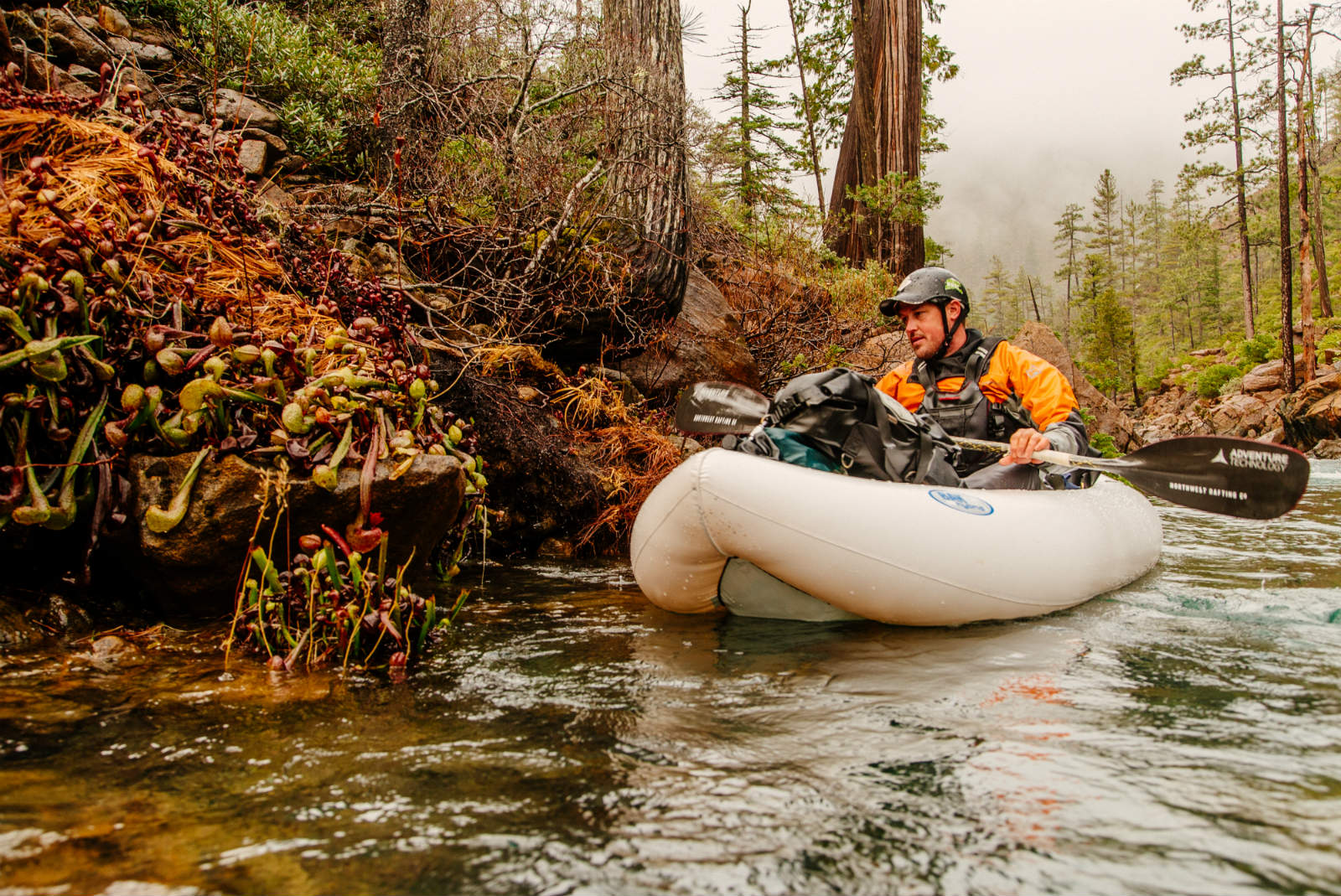 Finally arriving at the creek, with a few hours of daylight to spare, we jumped into our paddling gear and started downstream. A broad bench came into sight after a few miles. We made camp above the first of two gorges, the main obstacles in this unknown portion of the North Fork of Rough and Ready Creek. Or so our map indicated. Up to that point, the streambed had contained a steady gradient, but stretched wide from bank to bank and allowed easy scouting by boat. Our decision to paddle inflatable boats over hardshell kayaks also made our downstream progress easier since we could hop out and scout blind corners when there were no eddies. 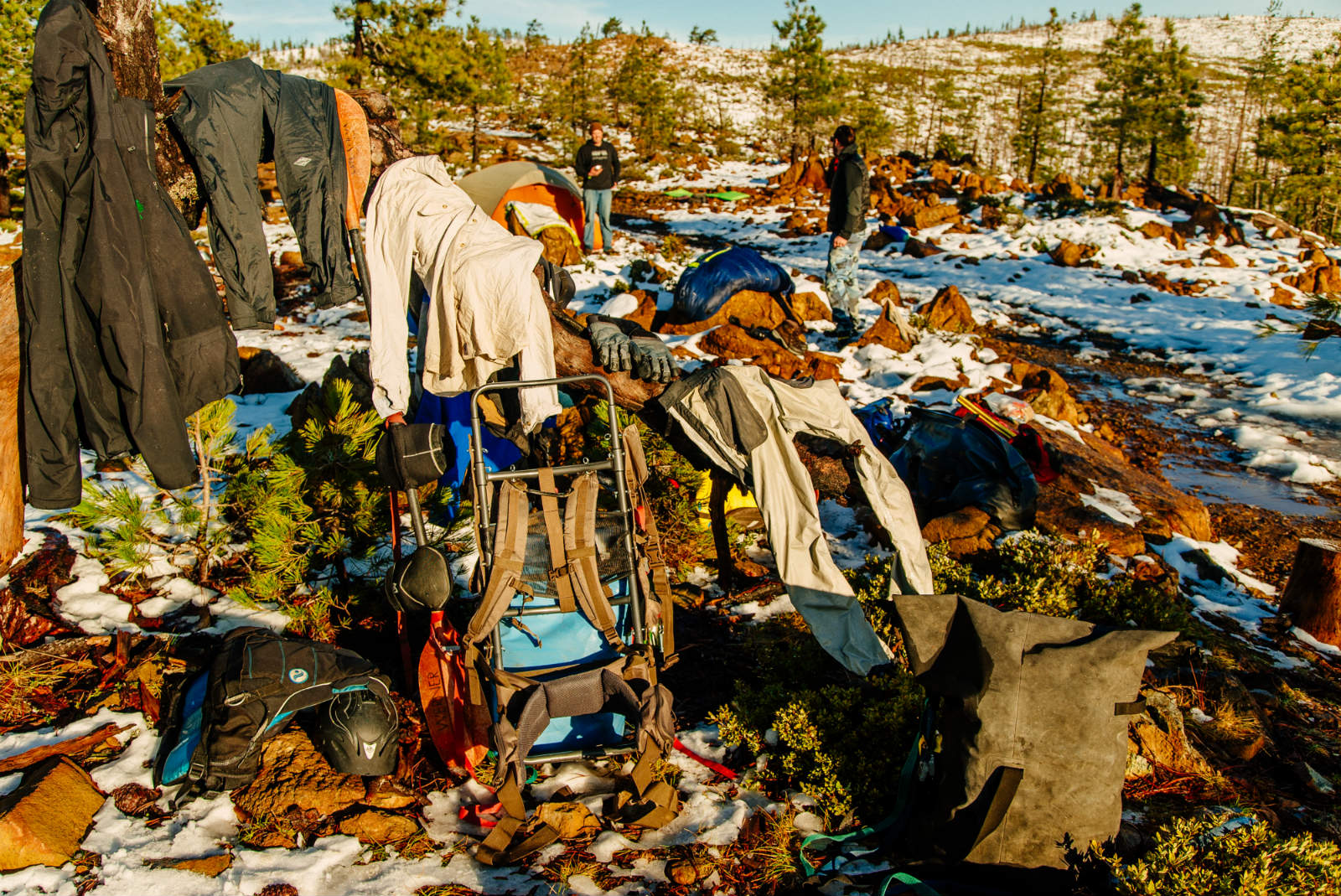 The next morning, it wasn’t long before our eddy-hopping rhythm was interrupted by the constriction of the first walled-in gorge. A quick scout revealed an end to the open rapids we had paddled through before. Larger boulders littered the streambed, but it all looked runnable. Back in the boats, I managed to pin and wrap my inflatable kayak a few times, but never so severely that I couldn’t pull it off by hand. Overall, we were stoked and satisfied. At this water level, I’m sure we would have been craving more flow if we had been in hardshells. 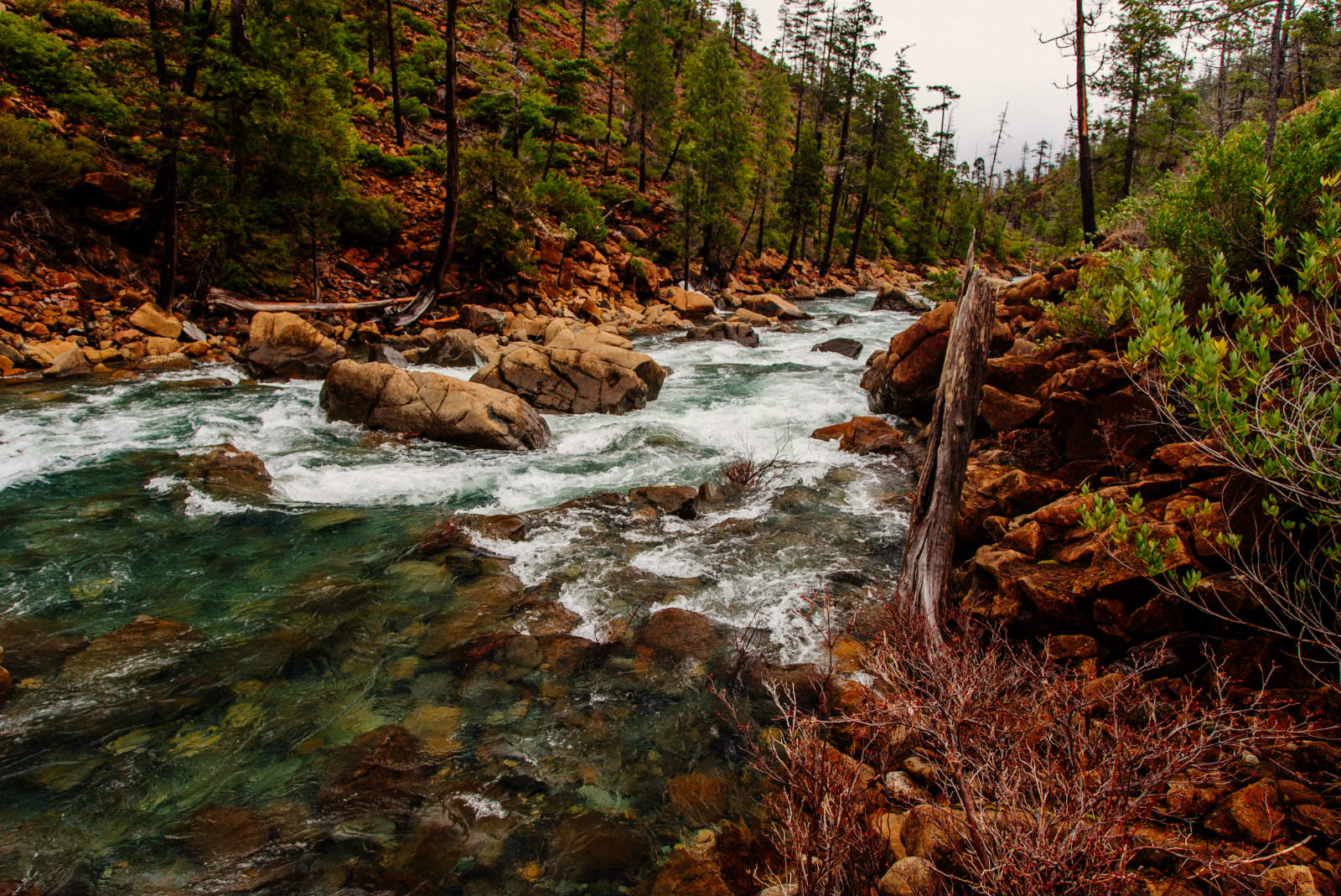 It was a relief to be making steady progress downstream and soon things opened up enough again to sit back and enjoy the views. Studies by the Forest Service have recommended Rough and Ready Creek’s inclusion in the Wild and Scenic River System, and everything we saw supported that. As recently as the Bush administration, most of the watershed was included in a proposed addition to the neighboring Kalmiopsis Wilderness. 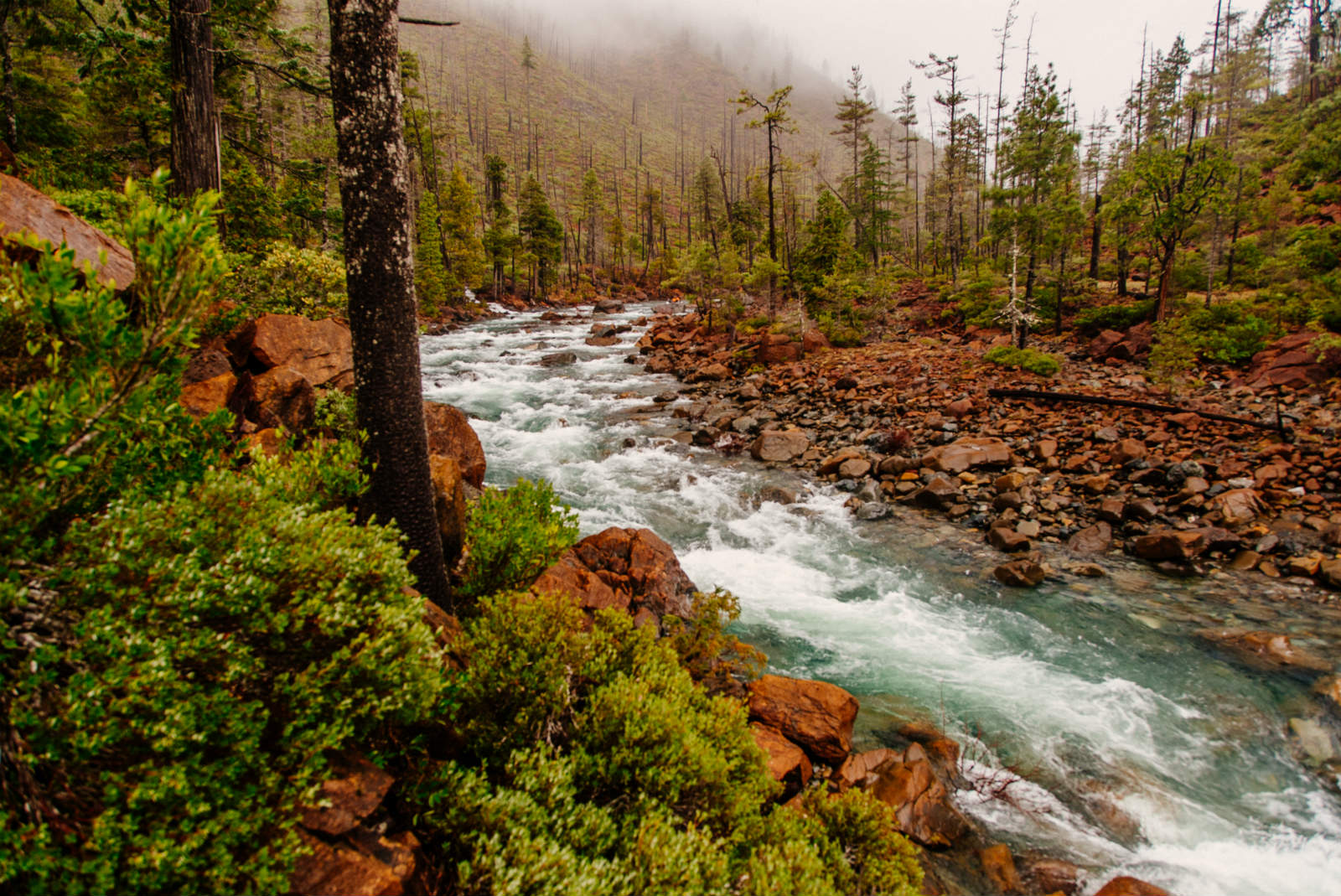 It wasn’t much farther past that point though, that shear walls closed in again and we encountered another prolonged gorge that diverted our attention back to the paddling at hand. Threading our way through boulders calved off from the cliff faces, we continued making progress until the last boat in our group snagged a sharp rock and sank midstream. Fortunately, the repair was within the scope of the roll of Tear-Aid we had and with a slight reshuffling of dry bags, we were on our way. There were still a few series of rapids to navigate before exiting the gorge, but the repaired boat was able to limp through with a few stops to top it off. 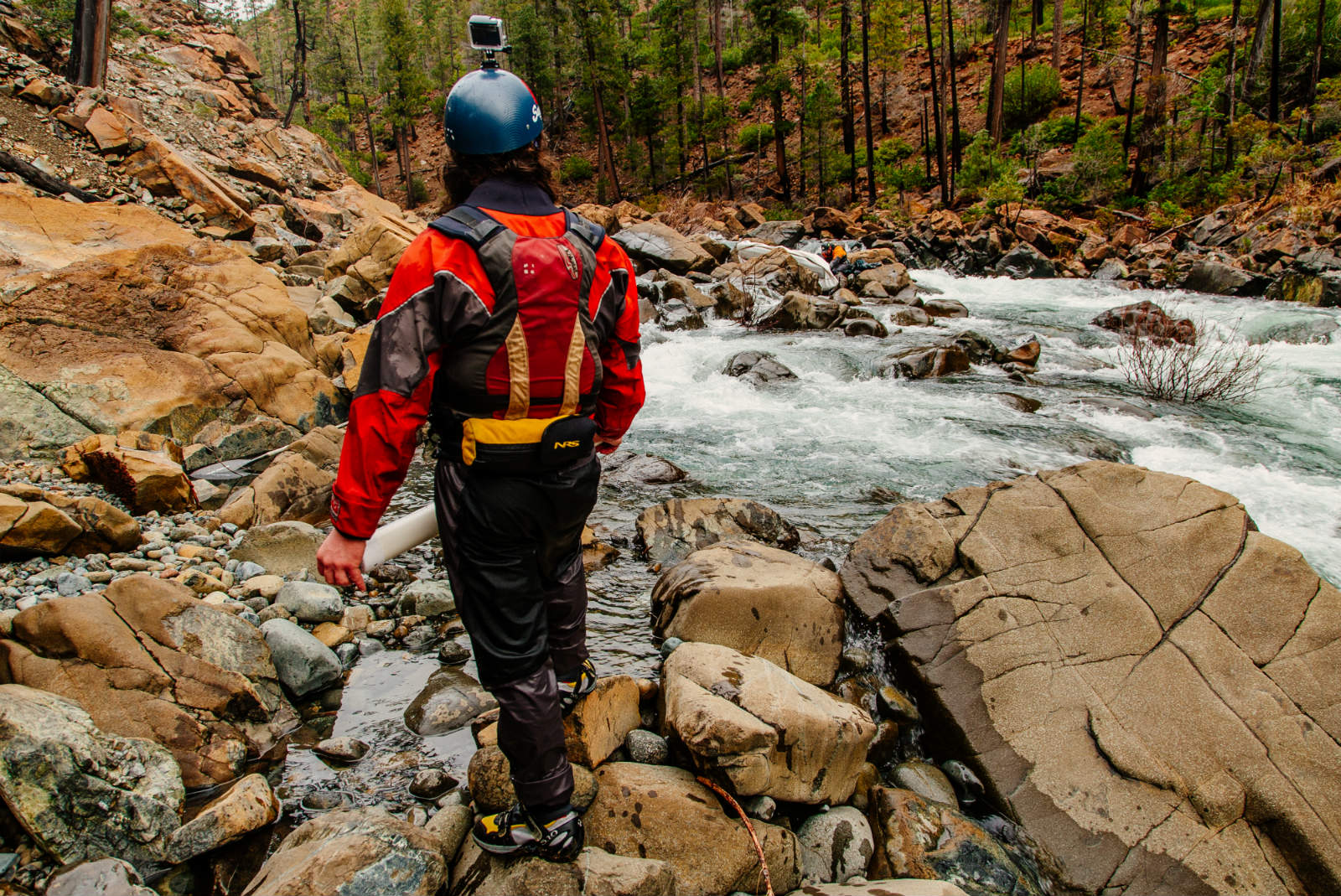 Emerging out into more open terrain, we encountered one last ledge rapid that marked the farthest point a previous trip had been able to reach by hiking boats upstream. By then, we knew we would be able to make our takeout in daylight and leisurely floated through the remaining miles to our cars. A few other tributaries, including the South Fork of Rough and Ready Creek added to the flow and the widened stream bed began meandering in wide sweeping turns and braided channels that are typical of its remaining miles before joining the Illinois River. 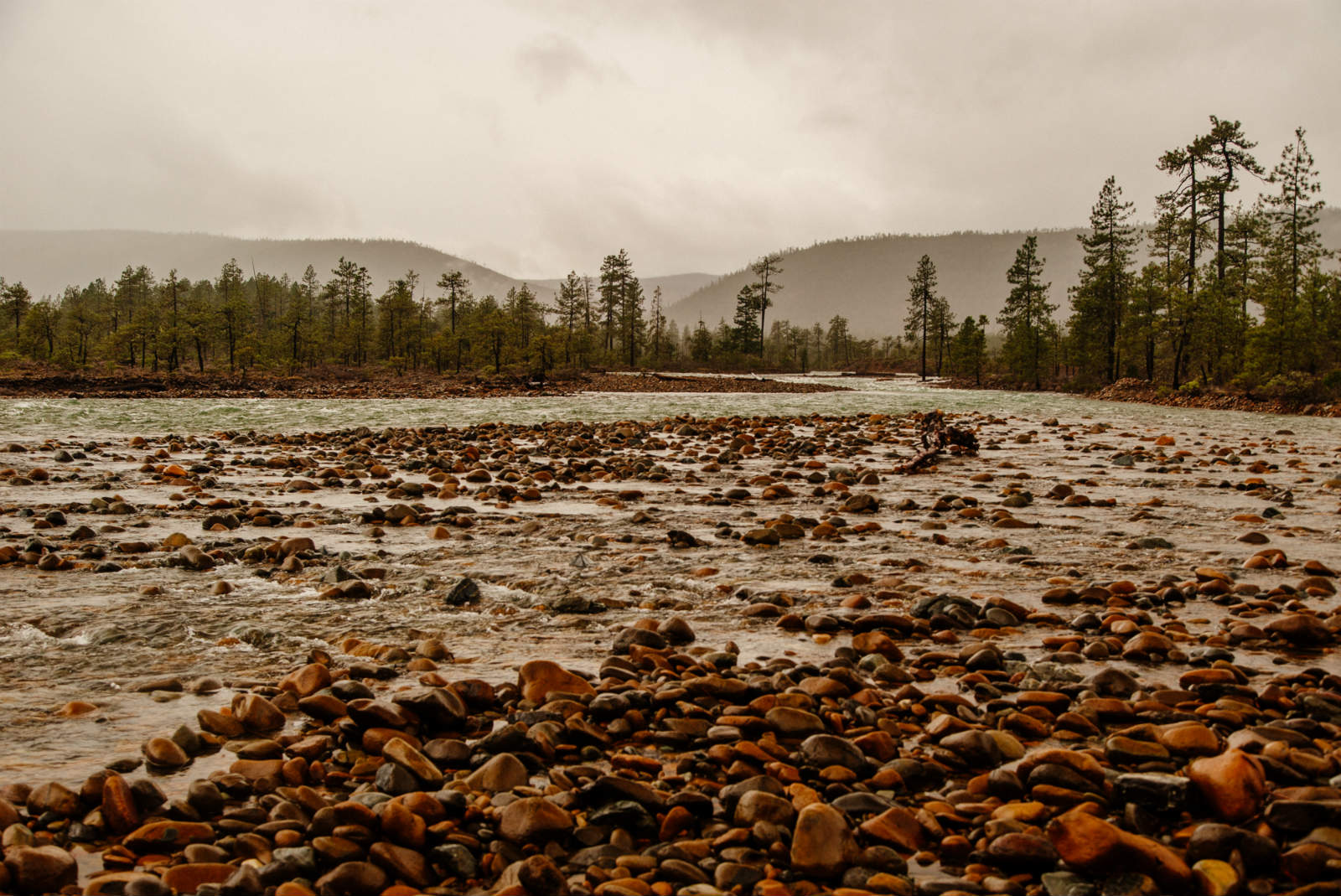 From our knowledge, it seems our trip was the first known descent of the Upper North Fork of Rough and Ready Creek. We were certainly motivated to paddle an unknown stretch of whitewater, but more than that, we wanted to get a better idea of what would be lost if proposals to strip mine the area move forward. As an eligible Wild and Scenic River lying within an inventoried roadless area, it’s clear that any sort of development, especially of the size proposed, would permanently alter the landscape, not to mention the other negative effects, making trips like ours impossible in the future. While recent legislation introduced in the Senate and House would serve to temporarily ban new mining claims in the area as well as creating a more stringent process for developing claims already in place, a lot still sits in the hands of market prices and a mining law that has not been reformed since the late nineteenth century. 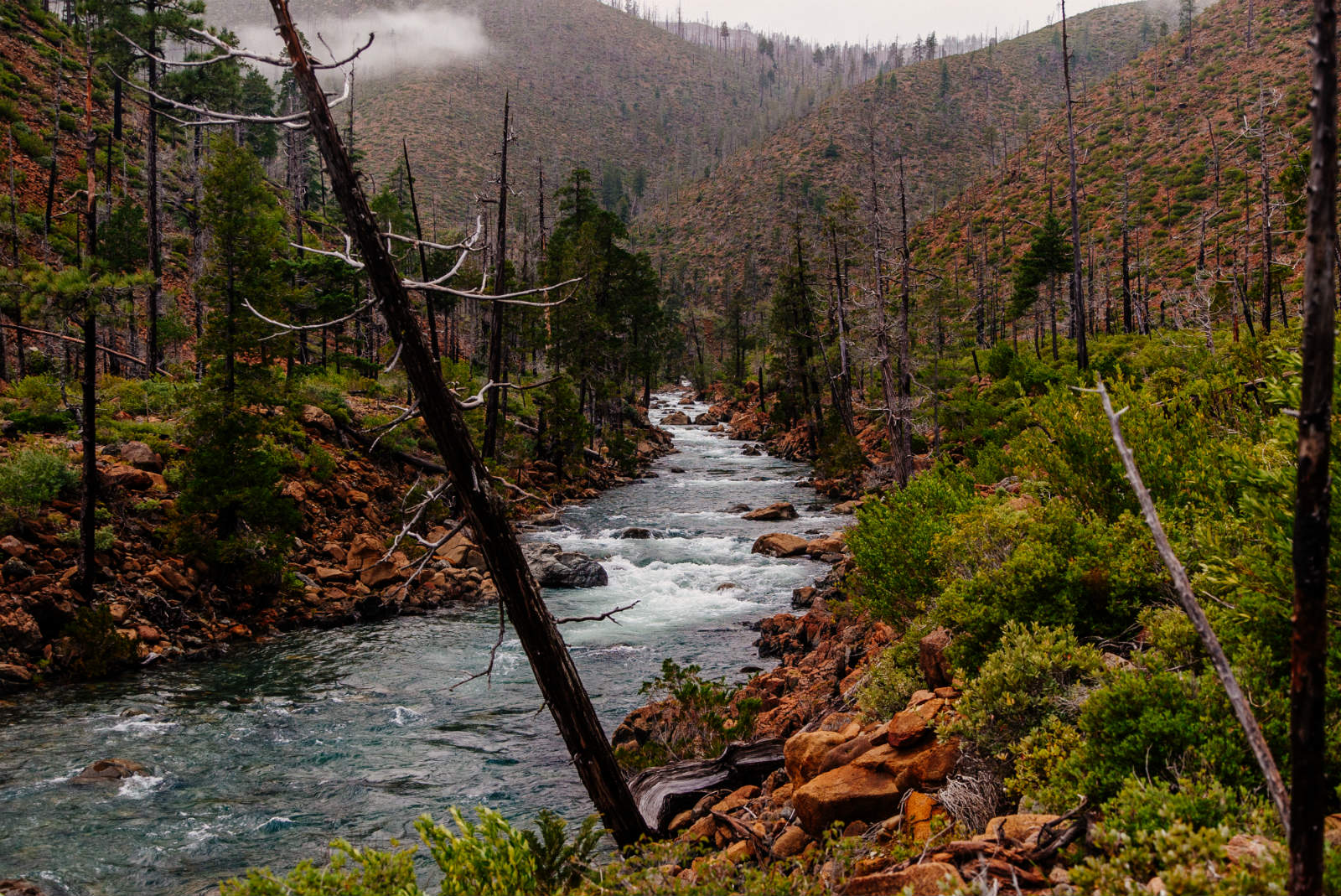 Rounding one last bend, we arrived at an old dirt road that marked our take out. As we de-rigged the boats and got ready to shoulder our packs again for the short walk back to the shuttle vehicles, we enjoyed one last look upstream. It felt good after all of our previous attempts, to have finally been able to experience some of the beauty that we had only guessed at before. Contour lines from the maps we had spent so much time studying came to life in the rugged gorges and exciting rapids of the last few days. In a place as amazing as Rough and Ready Creek, just getting to spend time there was as much a success as completing the unknown stretch of whitewater that originally drew us in. 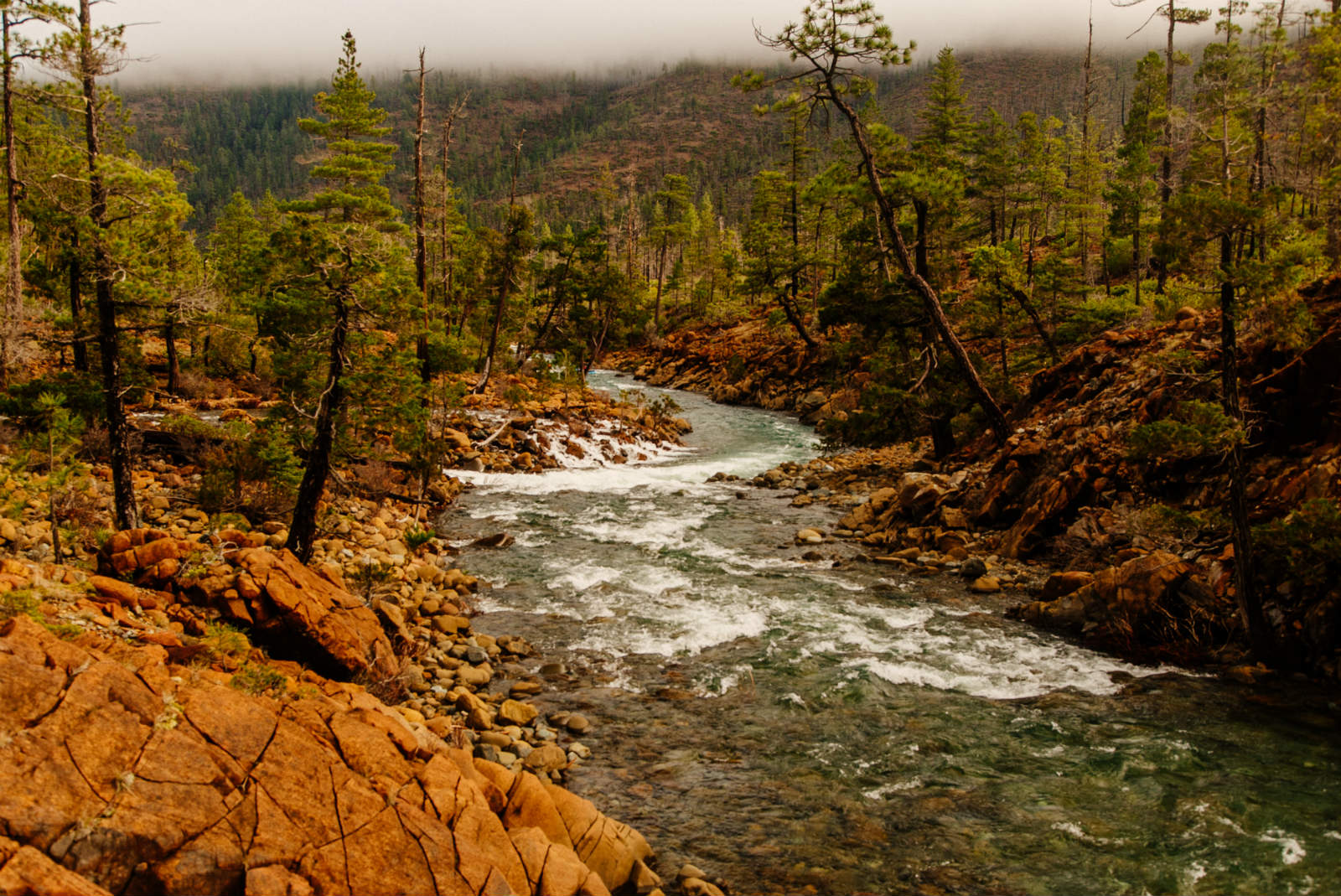 Editor’s Note: Guest Contributor Nate Wilson experienced his first rapids on the Chattooga River and has been hooked on rivers since. Away from the water, Nate enjoys photography and is working toward completing a degree in Applied Mathematics.