The lace to my wading boot snaps in half.

“Fuuuuuuu…” I moan, eyeing the gray mass of clouds moving down the canyon in my direction. I make quick “should I bail” calculations in my head. I decide the need for my body to stand in river outweighs the proximity to negative temperatures and limited remaining hours of daylight. 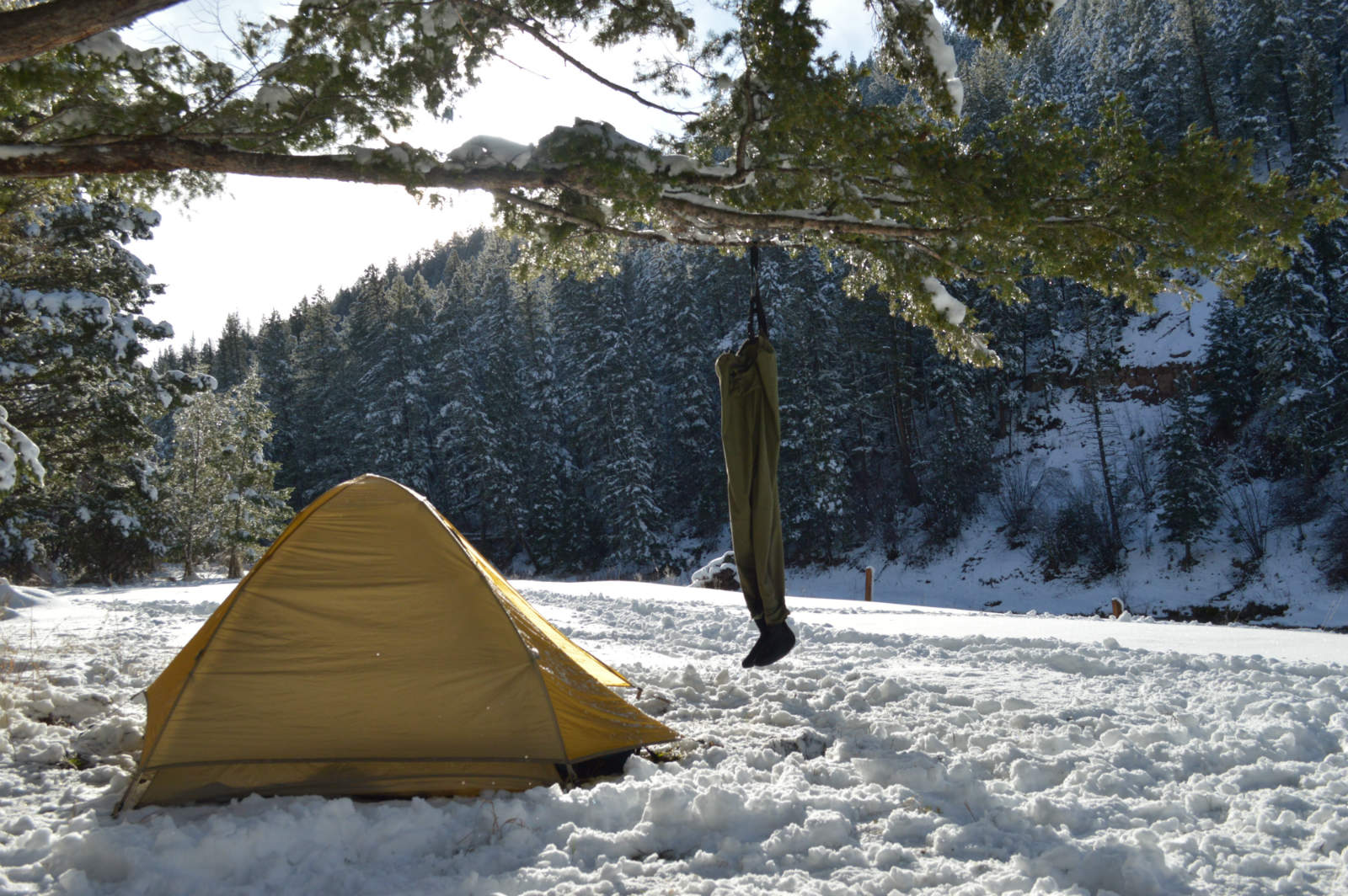 Covering my lace in tape, I cram the boot on my foot, hoping my “don’t know knots, tie lots!” method will hold. My waders, constructed for an overweight, four-foot tall, 12-year-old tourist, are already giving me a wedgie. I lace my line through the guides of my rod, my hands raw in the cold. I wonder what the weird sticky stuff on my fly line is, consider buying one of those fly line cleaning rags, then figure that’s for over-enthused gear junkies. There’s sand caked into my reel from my last river trip. I don’t qualify as a gear junkie yet.

I tie on a nymph with two beads and a San Juan worm. Last week, I tied a small army of fuzzy annelids. The San Juan worm is a beginner fly but effective.  Don’t pretend you didn’t start with tying the San Juan worm, fly fishing experts. Don’t pretend it wasn’t a big moment when you realized the bead had a tapered hole to keep it from slipping over the eyelet of the hook.

I tromp down the mud bank and over the ice shelf onto the island, boot flapping and wader-wedgie firmly in place. I push through dogwoods the color of my hands and clamber over fallen cottonwoods to the run. This morning as I daydreamed at work, I imagined myself taking a meditative moment on the bank. I thought I would curl up against a log with a steaming cup of tea in and listen to that sweet pop and rumble of water over cobble.

Imagine the fishing catalog photo spread here—can’t you see it?

But when I reach the river I’m cold and too excited, and I can sense a trout is hungry and maybe willing to put some junk food in it’s mouth on its way home from work like I do all the time.

I slide back off the ice shelf into the river. It’s starting to rain-snow in that Montana shoulder season way. Then, thigh deep in water, time slows to the pace of my drifts. 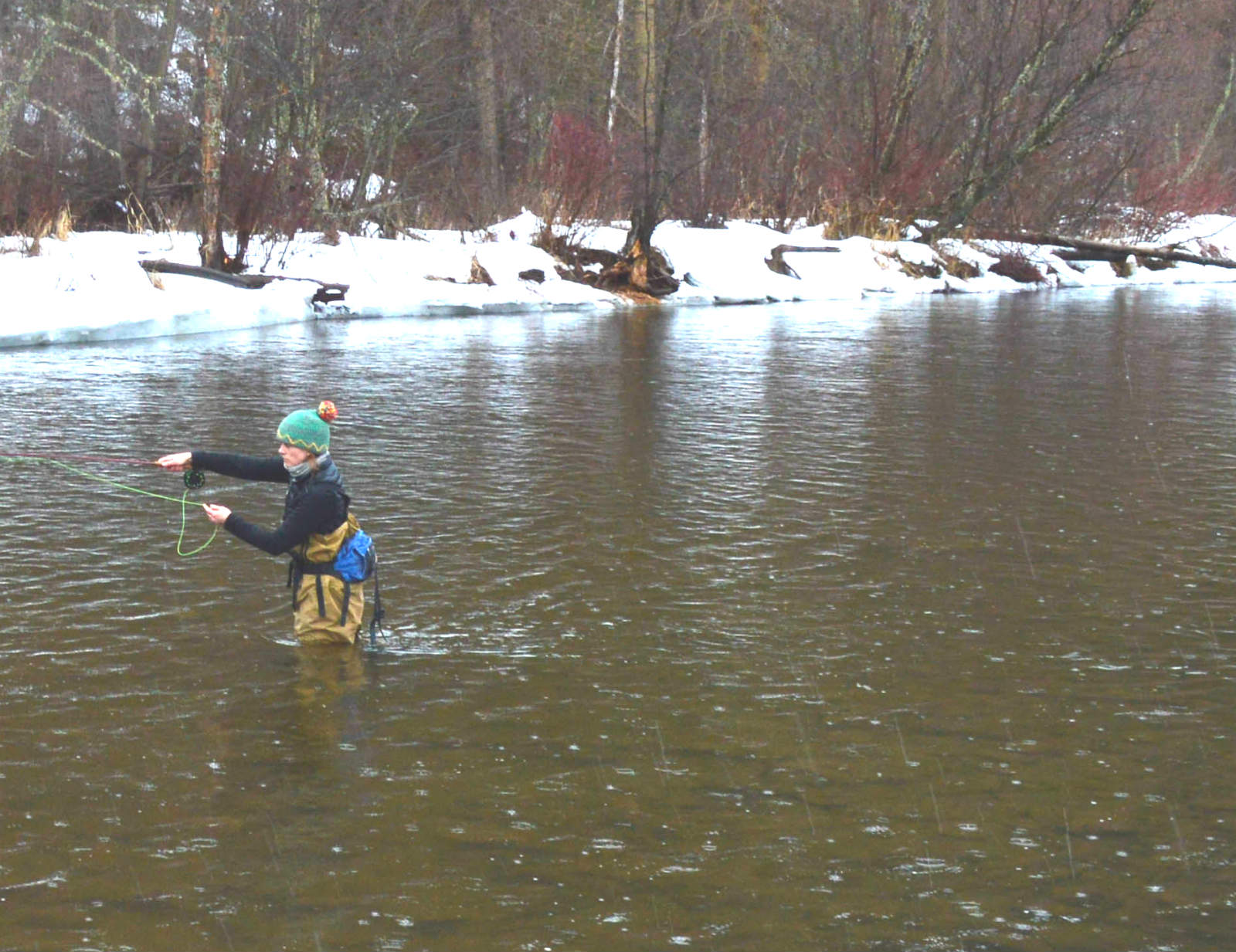 A heron contracts her awkward limbs and flaps downstream.
Rain forms droplets on the dogwood branches.
I wonder if I locked my keys in my car.
My fingers draw back and forth along my sticky fly line.

A tug. My arm rises; there’s a flash of silver and that feeling (that feeling!) of river, of life, of time itself on the end of my line. The rainbow isn’t big—it’s not small either. A maroon worm hangs from its jaw. My knuckles go numb as I plunge my hand into the river, free the hook and the fish darts away. I stand up and shake my wedgie-wadered ass and yell, “Thank you! THANK YOU!” out into the sleet-filled, gray canyon. Slipping on the cobbles, I fall in the water. 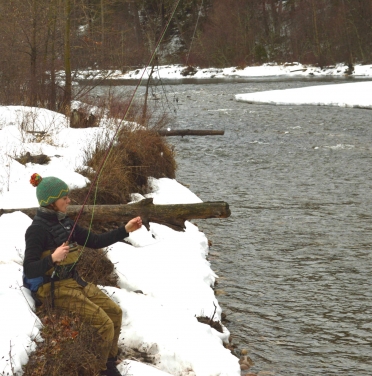 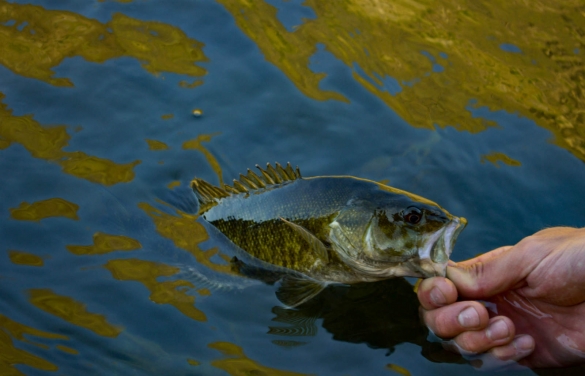 If this story is a photograph, it’s not Hilary Hutcheson setting the hook on a cutthroat. It’s not April Vokey cradling a steelhead the size of your femur. This image isn’t a dripping bonefish in turquoise water or a yellow lab lying patiently on the deck of a wooden drift boat. I won’t leave you wishing for a fly rod in your hand (the newest model) or wistfully hoping you could cast as well as “them.” This story is just a beginnings story. And it might matter because no matter how many trout caught, miles rowed, rivers waded, flies tied—everyone begins somehow.

Fishing for another hour, I miss some bites and catch a few branches. I should move to another run but my impromptu river bath has rendered me lazy, or close enough to hypothermic to not make reasonable decisions. The sky darkens to a grayer gray — the color I’ve learned to see as, “You don’t have a headlamp, dumbass.” I tromp and stumble back across the island to the road. A fisherman who looks like he knows what he’s doing is breaking down his rod across the parking lot. I wave but don’t inquire about his afternoon. I consider how to untie my “lots-knots” wading boots with my ice-block hands.

Sitting in my car with my cheek against the heating vent, I wonder if I should spend my small paycheck this month on wedgie-less waders, a new reel, or a fly line not covered in goo. I remember my beginnings—not tying my own knots, the mystery of a nymph rig, splashing around in muck boots. Up against others, we’re always beginners. Up against ourselves, we roll cast without tangling and suspect we might be getting somewhere. 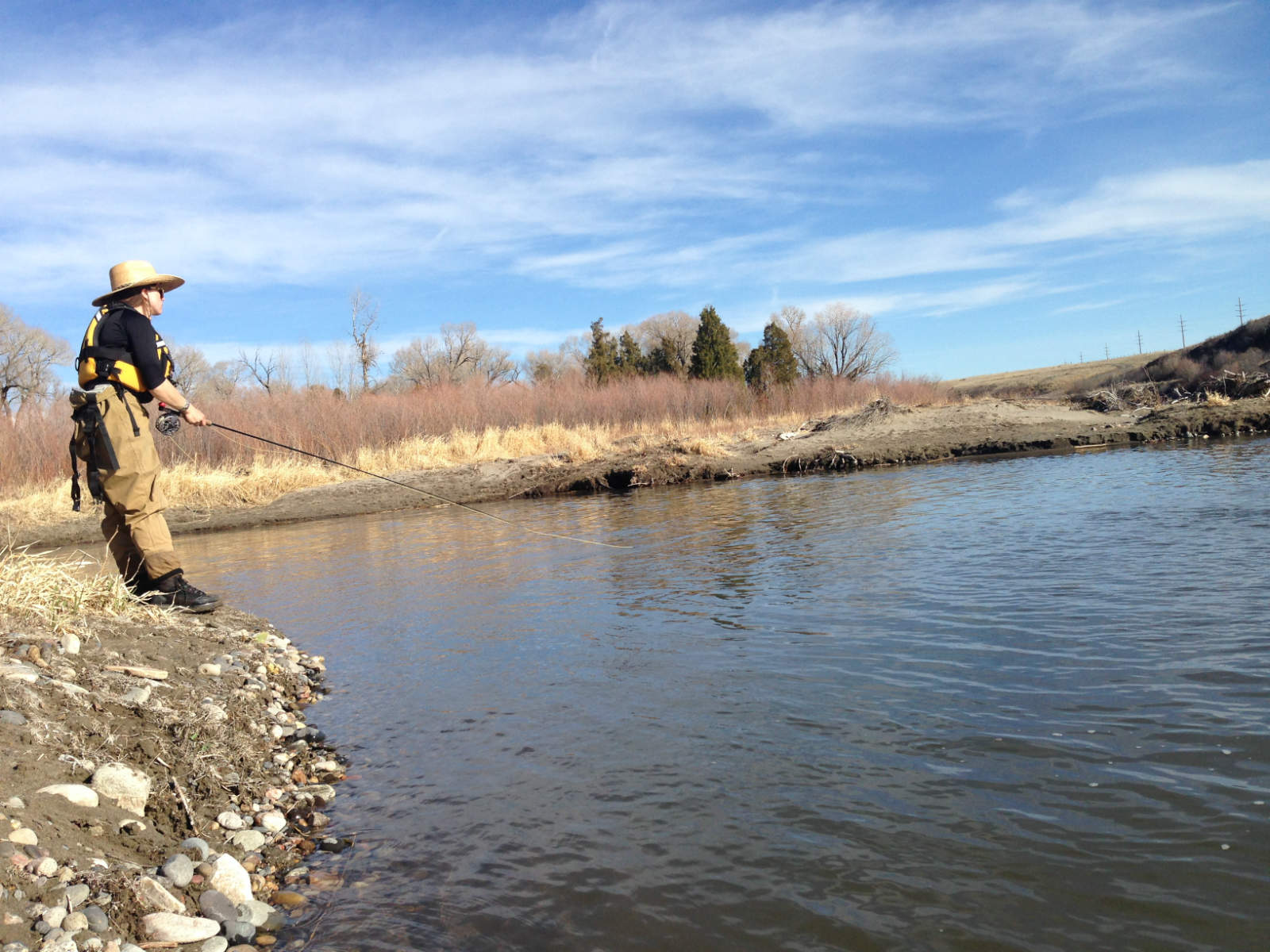 In whitewater, I’m not a beginner anymore. I won’t say I’m an expert either. There are so many rowing techniques, lines through rapids, swiftwater rescue scenarios and ways to mess up. Any guide worth a damn doesn’t let their ego get the best of them. But I train new guides how to row from their core, and I lead trips of sixteen city folks down six days of wilderness whitewater. Scouting rapids, I don’t have the urge to puke, at least most days. When I compare myself to the twenty-year guides around me I’m a beginner. When rigging a boat with friends for a private trip, I’m the expert. Most days I feel somewhere in between.

When asked to lead, I’ve always been some blend of bossy big sister and group-decision-making facilitator. I’m not afraid to take charge, but I want everyone to like me too. Witnessing the different leadership roles in a respected river company has changed this. Now, I don’t always admit my mistakes. I don’t always present all the options to my crew and let them decide. If I’m nervous about rowing a dory through a rapid, I don’t express my fears to my outfitter. I still say thank you a lot but I apologize less. Each morning when I wake up on the deck of my boat I repeat, “You are NOT a beginner, trust yourself, you make good decisions, listen to your gut.” I take inspiration from those twenty-year veterans and the confidence in which they move through their river world.

That step into no longer being a beginner on the river, however, hardened a part of me too. As the guiding season ended this fall, I felt paralyzed to try anything I couldn’t do confidently or with the style I feel on whitewater. I missed the laughter, misadventures and small moments of being a beginner. I missed the little (or are they huge?) victories of really, really sucking at something and then sucking a little less. I missed moving through a sport with few expectations for myself or from others.

When you’re learning something new, it’s okay to take help from the experts. I learned to row a boat from my parents and from a handful of patient women at my first rafting company. I still learn to row from the guides I work with today. I was tutored in fly fishing from a former boyfriend, then from a local Missoula fly fishing guide, then from the boyfriend again. 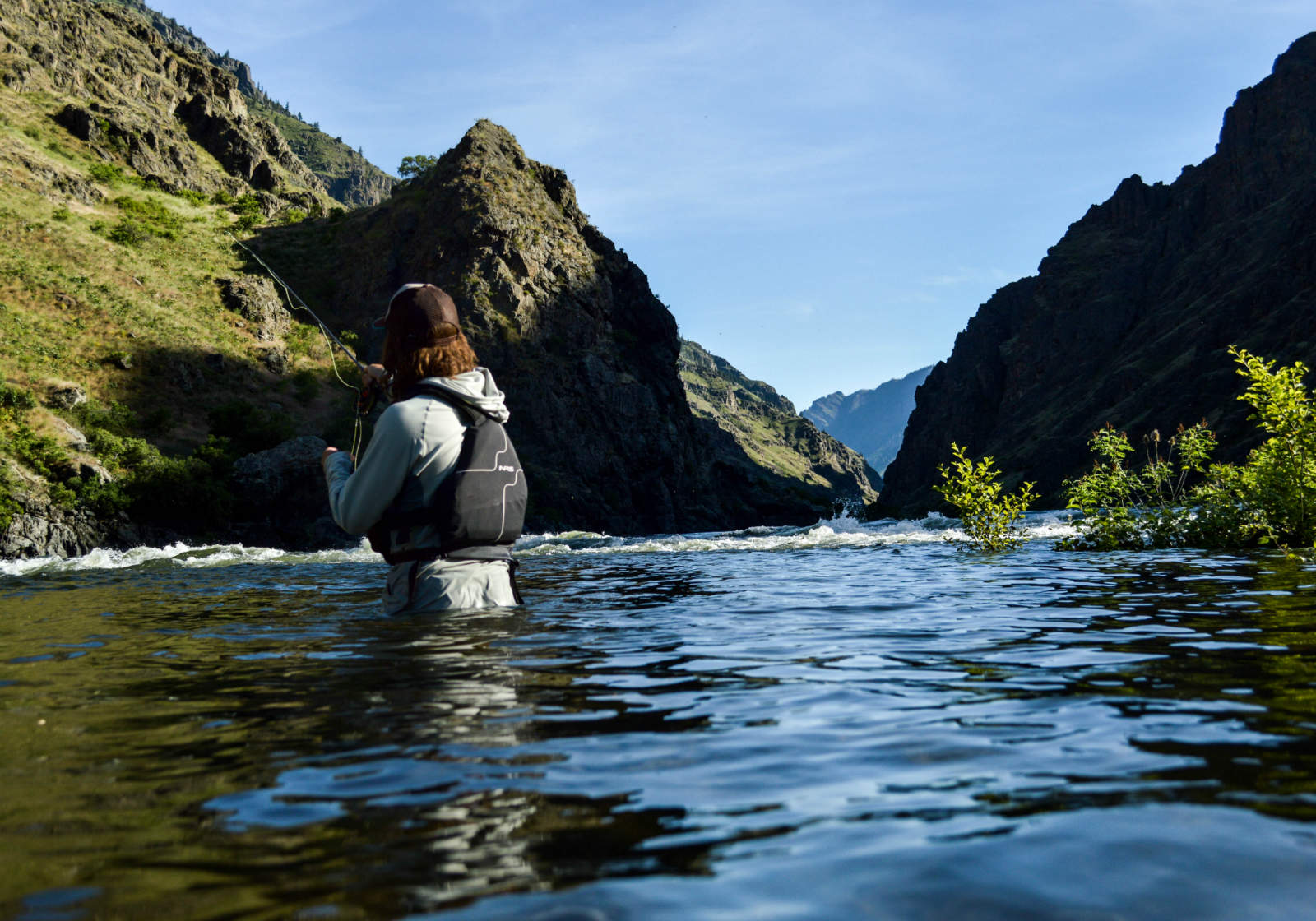 But that former boyfriend, the one who first helped me cast a fly rod, the one who can feel where a fish is holding in a river more innately than anyone I’ve met—he didn’t just learn from others. He learned from going out on the river, alone, and casting, tangling and missing fish. My first run down the Main Salmon River in a dory, I didn’t have a senior guide sitting in the bow. I was alone, leading the trip even—and had to trust that I would fail and learn, simultaneously.

So with a decision to embrace beginner-ness, I picked up my fly rod again. I went out without a fly-fishing expert to show off the flies they were choosing or where the fish might be holding. I let my rigs drift over acres of river with no bites. On days too snowy for a sane person to fish, I wrapped my clumsy fingers around chenille and hackle and tied mutilated looking wooly buggers and San Juan worms. I wasn’t just practicing fly fishing, I was practicing being a beginner. And on occasion, a rainbow trout would decide a San Juan worm was the snack of the day, and my beginning flailing would be met with a taste of reward. Reward for me, at least. Trout in Rock Creek hate the taste of chenille. 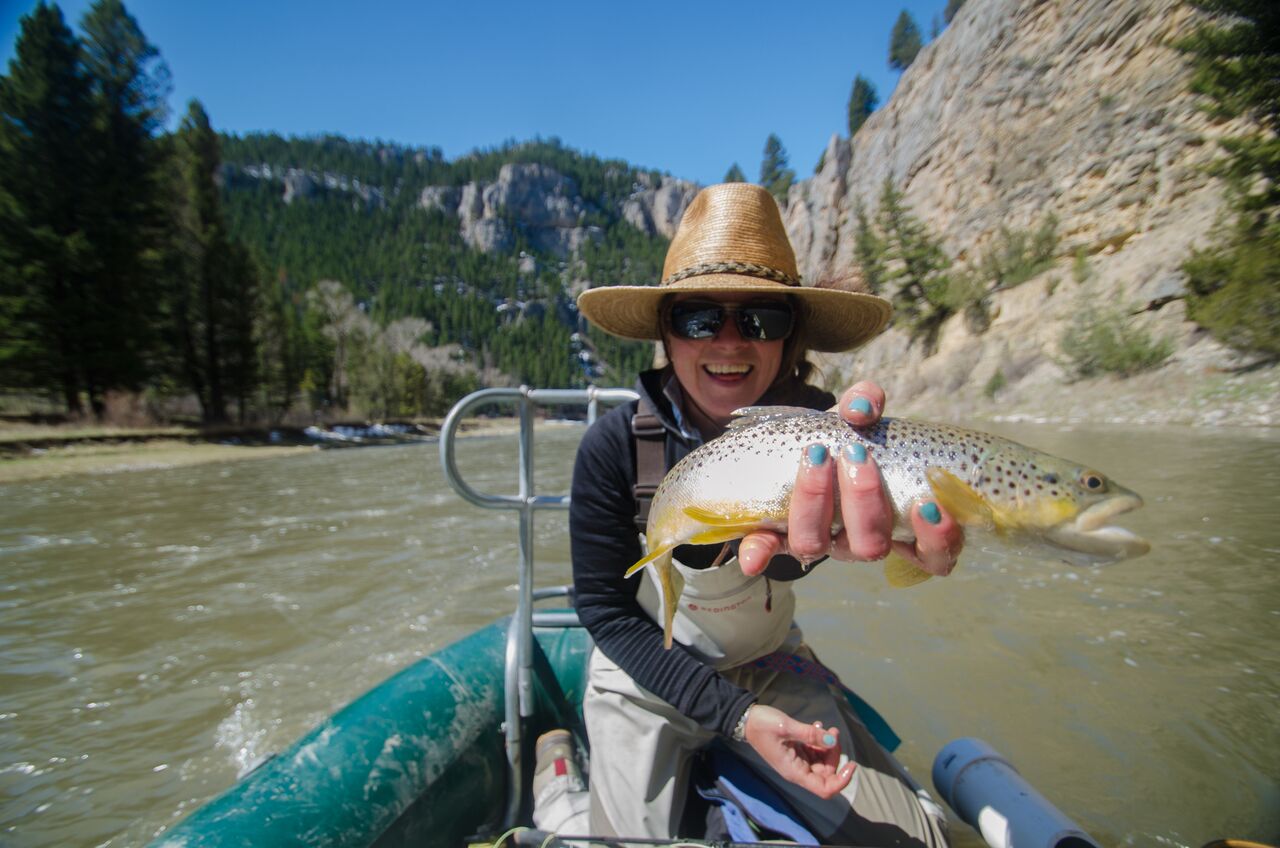 A few days later, I’m getting ready to leave my house for work when I see two men in the front yard of my apartment building with a fly rod. It’s probably some expert teaching a friend, I think, wondering if my fish-talk is developed enough to not embarrass myself. I walk outside and ask the men how they’re doing. Their fly line is unstrung.

“We just found this in the garage and wanted to practice casting,” one man says. “But we don’t really know how to set it up.”

I waver. Who am I to help, I practically just started fishing. Then bossy big sister whitewater Emerald kicks in. “Oh, I can show you. If you want.”

I bend the fly line over the leader and string the line onto the rod.

Maybe the point of this story was somewhere in the first couple paragraphs, like the times you fish an entire day and catch your best trout in the first ten minutes. Wedgie waders, gooey fly lines, snagged branches, flailing around on rivers and in sports we want to love but don’t yet understand—the beginnings hold as many stories as the well-polished accomplishments. 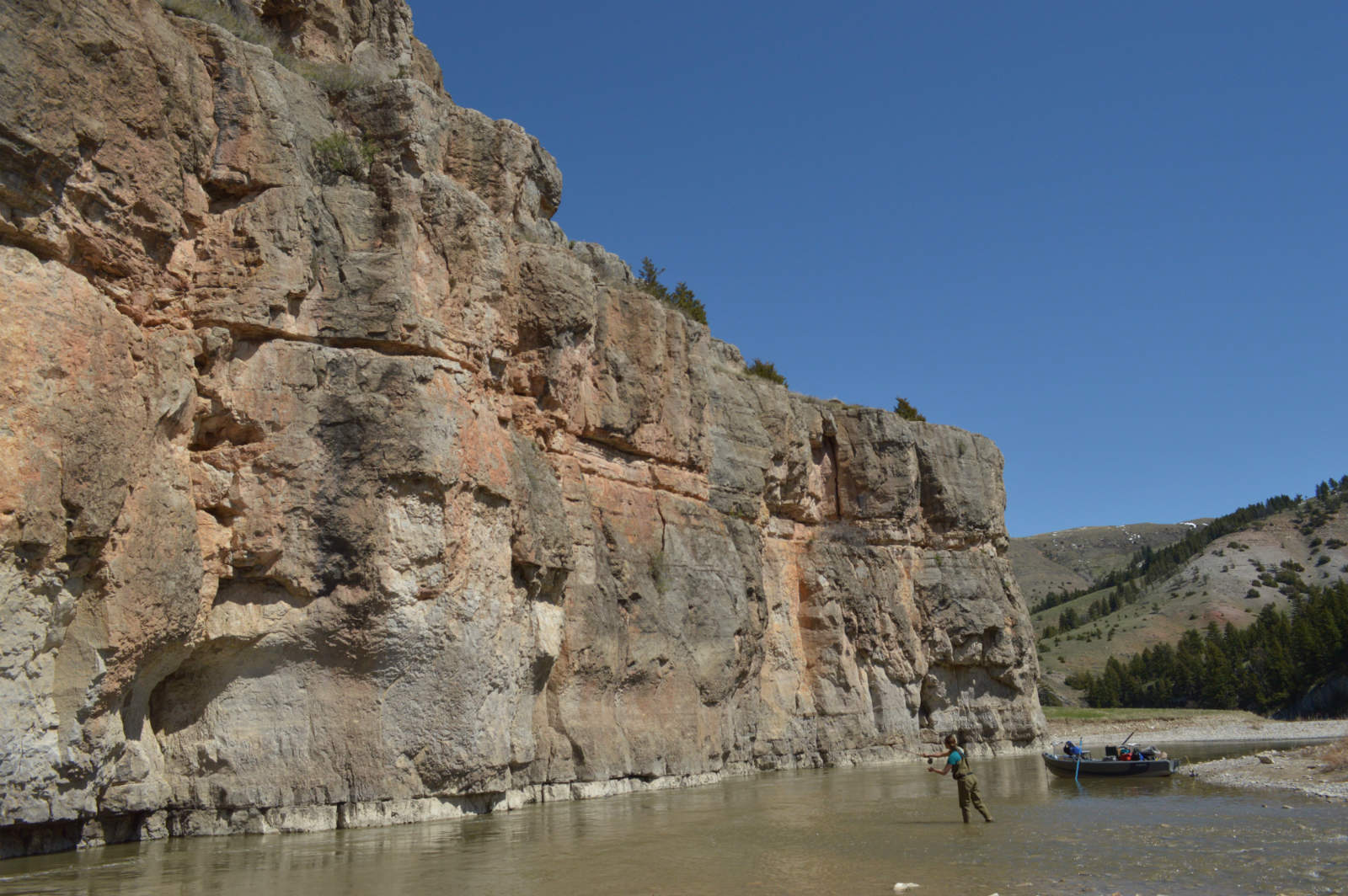 Hilary and April and the women and men I admire in the glossy magazine—they started somewhere, too. It’s easy, particularly in the brag board culture of fishing, to get wrapped up in the “grip and grin” photos and videos of a sport. And while I’ve caught those 20 inch bulls and heavy hook-jawed browns (and have the photos to prove it) they aren’t the fish I am most proud of. I’m most proud of the small rainbow I catch on a mutant-looking San Juan worm that I tied myself. I’m most proud of the Lower Salmon small mouth bass I help a client pluck from an eddy with a simple wooly bugger. On the Bitterroot, when a fish rises to a small, gray mayfly pattern I’ve selected out of my own fly-box, I don’t even care that I “wet-release” the fish 60 seconds later. I’m indebted to those who have helped me understand where to place my fly. I’ve caught beautiful fish with their help. Yet my most rewarding moments have been alone, in a cold canyon, waders crammed up my butt crack with no one there to hear my hollers of joy.