Misfits on the Grand

With little to no river experience, Sarah and I joined a mismatched bandit crew of river rats and mountain climbers and launched onto one of the most coveted rivers in boating history. We counted ourselves lucky to be on the adventure of a lifetime. For the next 18 days, these rafts and these people would be our only world.

Even though the red canyon walls felt like a familiar landscape, we were completely out of our element. Up until this point, most of our desert experience had been spent scampering up vertical cliffs—the only water for miles and miles was the water coming from our carefully stowed jerries in the back of the van we were living out of. But when we got a phone call the year before from a climbing buddy living in Jackson, Wyoming that he had two open spots on a Grand Canyon rafting trip, there was no hesitation about hopping on board. You don’t say no to the Grand Canyon. 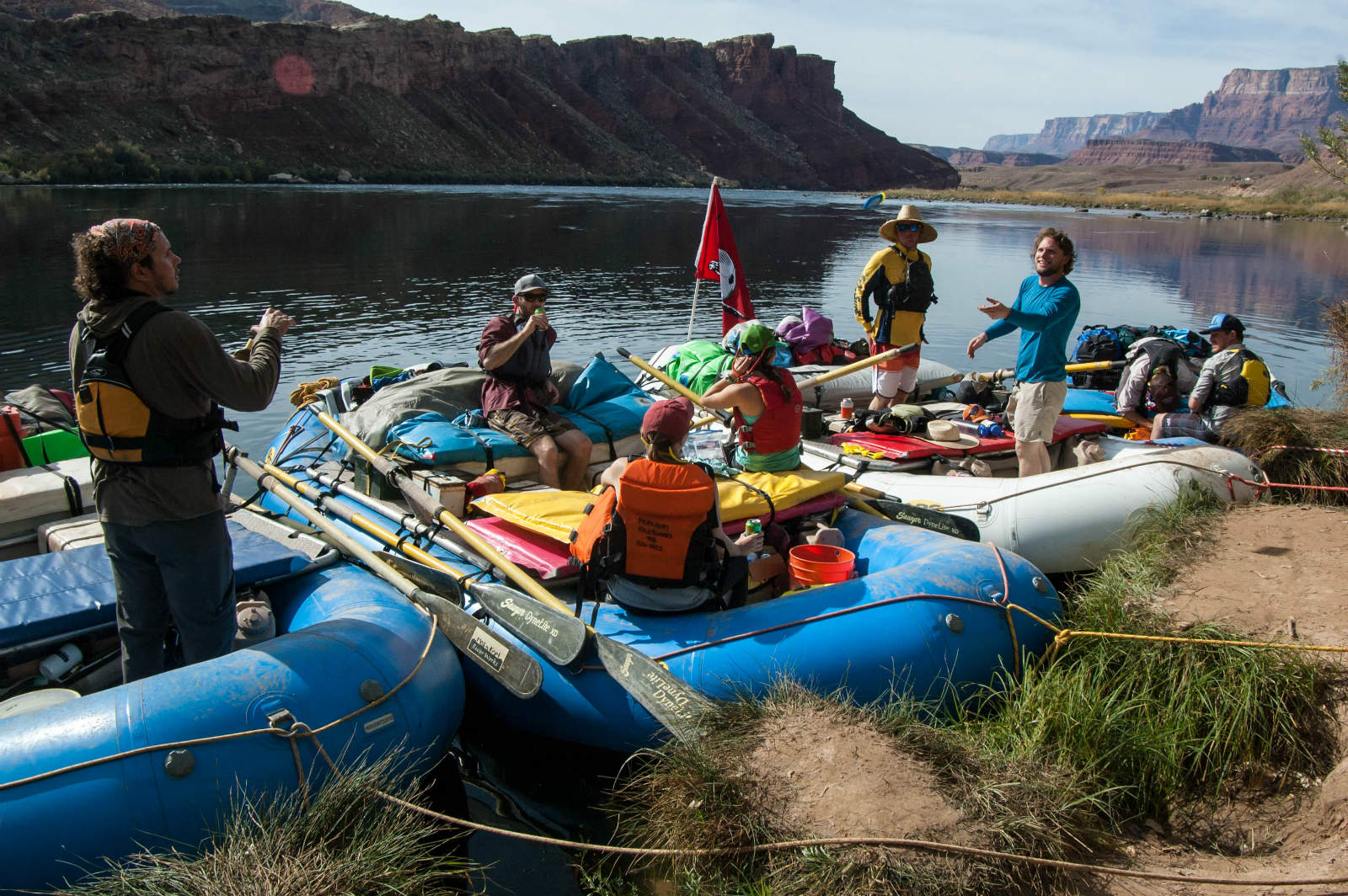 Moving down the river every day we witnessed the walls move in and out, grow and shrink in size as we traveled into different rock types and layers of the earth. Evidence remained of the first people to see this incredible landscape—their ruins, rock art, and artifacts. Even with our advanced knowledge, I couldn’t help but feel the mystery of a place like this. It spoke to the deeper part of my consciousness where primitive instincts are still intact and it manifested into a profound sense of astonishment. 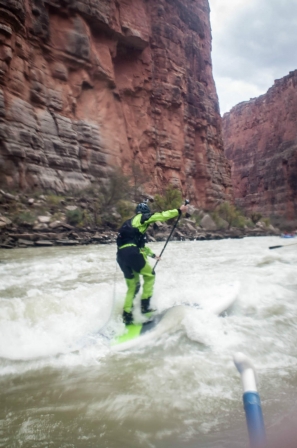 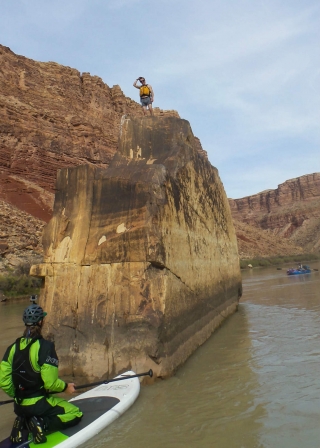 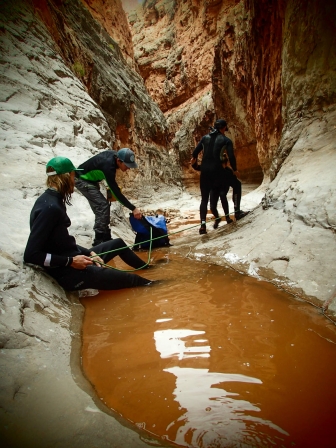 Day one: filled with a confidence only my drysuit and helmet could inspire, I taught myself to paddle board. The NPS ranger that checked our gear at Lees Ferry had snickered at our paddle board, calling it a “swim next-to-board.” She was right. I ended up swimming almost every rapid over class 2 that day. For a person who normally hates swimming in cold water, my motivation to get back on the SUP time after time with a smile on my face was the first bit of evidence to how magical the Grand can be.

That same day, with a new set of skills under my belt, Mark jumped on the front of the paddle board and I positioned him at the back of Ten-Mile Rock. With the river at 9,000 cfs, the rock stood nearly 12 feet out of the water. Day one and our first solid ascent in the books, we paddled to catch up with the rest of the group. My whitewater swims were broken up by roped up exploration of limestone slot canyons and swimming through stagnant pools of cold water. It was a welcome reprieve from falling into the raging foam of the Colorado River. 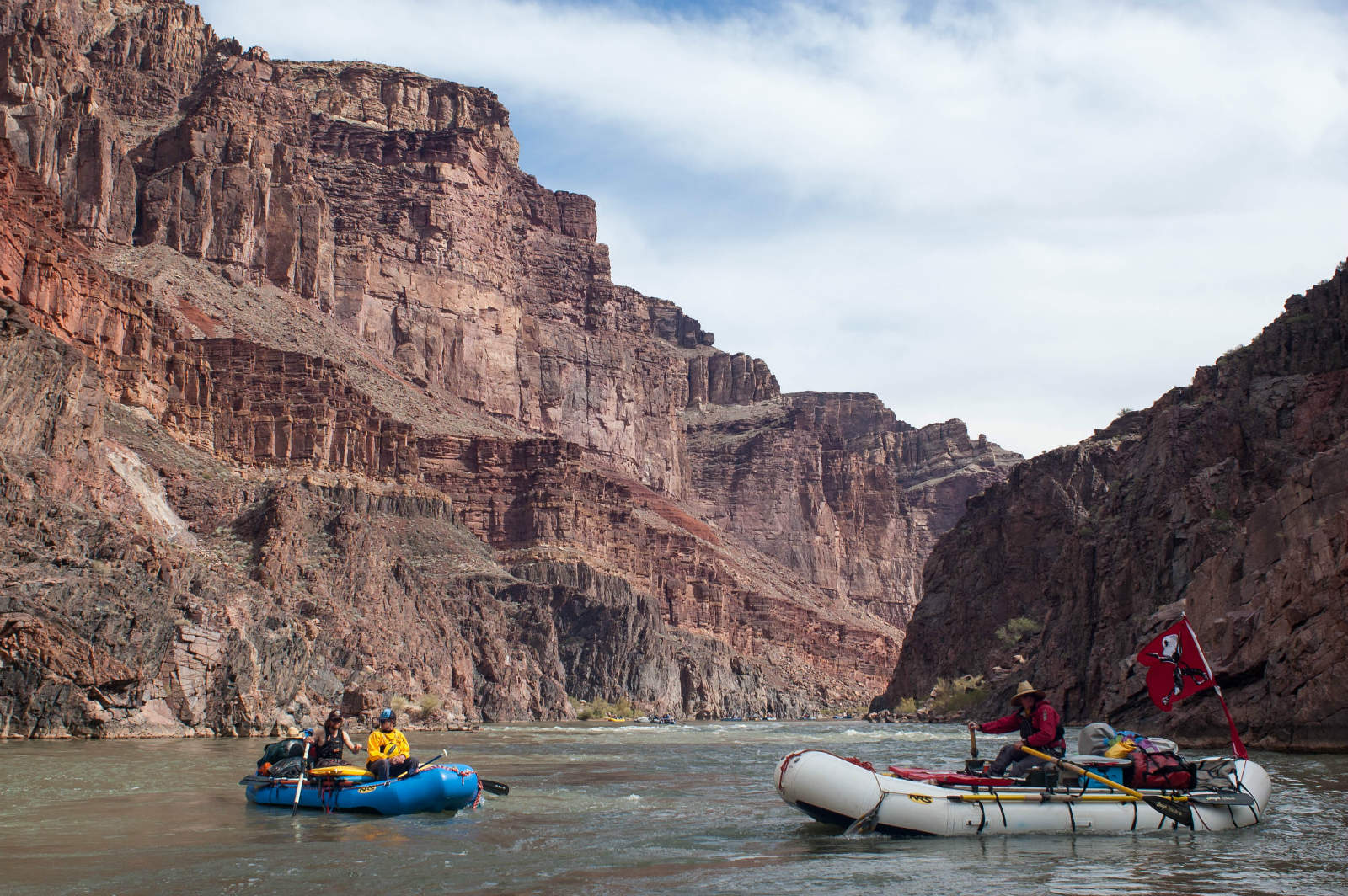 Anyone who has been down the Grand Canyon will tell you it’s one of, if not the, greatest experiences of a lifetime. As a climber and a skier, I’ve spent a good amount of time in remote places and national parks, but there’s something different about the Grand Canyon. Every day we moved down river with a group of people who came together by the shared experience of feeling like an explorer in a sacred and lost world. The camaraderie between other raft trips was palpable. Every boater was psyched, whether it was their first time on the Colorado River or their thirtieth. I could see the difference in the faces of people who were down there for their first time and the ones who had dedicated their lives to exploring the Grand Canyon. Veterans’ eyes expressed a tangible feeling of respect for the canyon and an unmistakable twinkle as they recounted experiences. 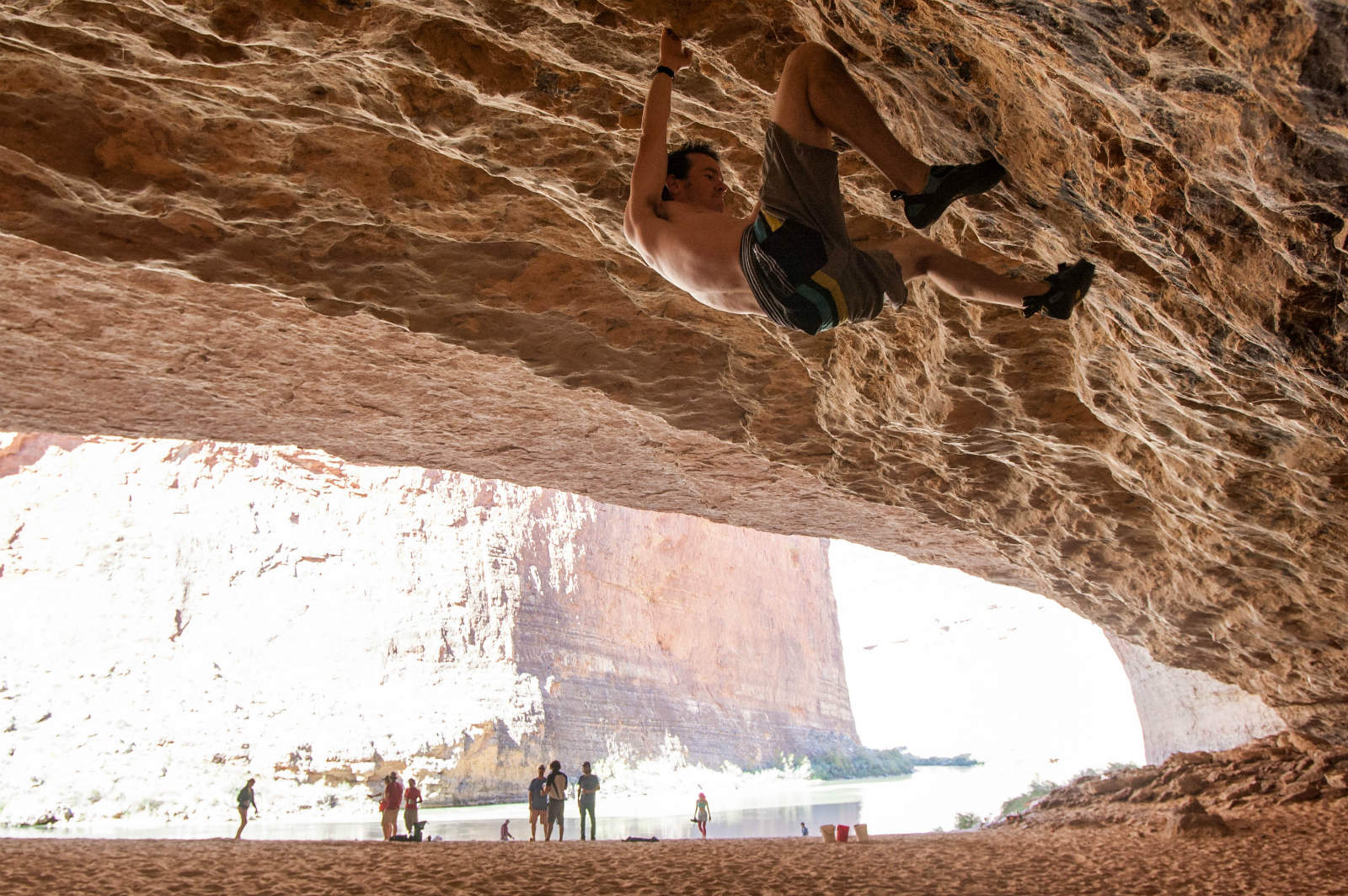 Around day three we eddied out at Redwall Cavern. It was amazing, especially to us climbers. Steep roof problems over sand that went as high as you dared. We traversed the back wall all morning until we had to leave, while the rest of the crew played frisby and engaged in other pirate shenanigans.

When we sat on the bank at the confluence of the Little Colorado River we wondered about the places in this world that receive a lot of hype—places talked about and photographed with such frequency that they lose a bit of their luster once experienced in real life. But this place exceeded any idea I had. It was sacred and beautiful. 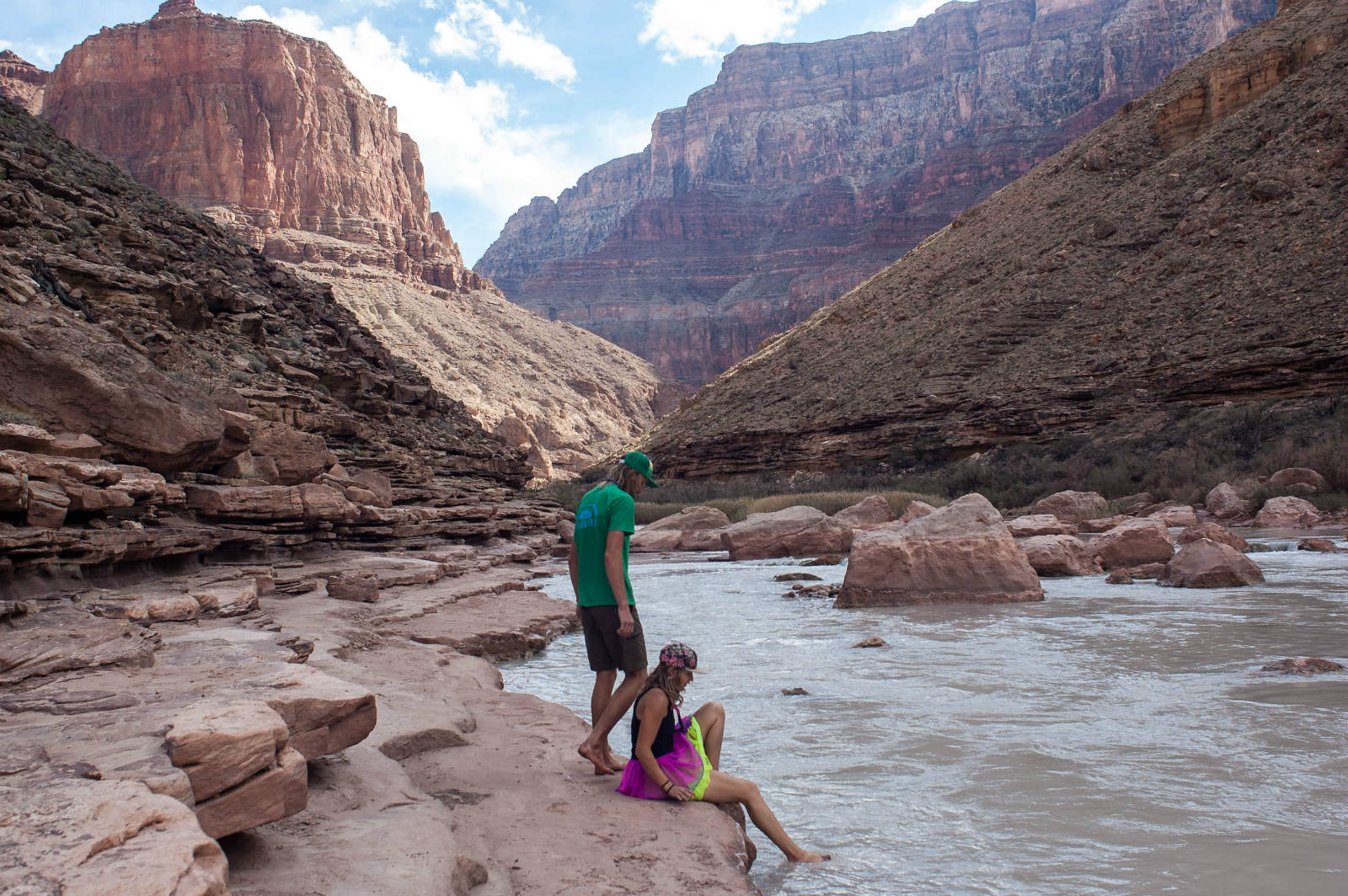 On the Grand Canyon everything became routine—the chore rotation, the daily schedule, de-rigging each afternoon, setting up camp, and rigging the boats every morning for the day’s adventure. In the chilly morning air, under the light of a headlamp, Sarah made the first wake up call for coffee, her voice loud and piercing to overpower the low roar of the lower rapid—our first obstacle of the day. Bryan, standing directly across the table from Sarah’s coffee call, jumped back. The three of us were assigned to the same chore group. We were used to each other. But what we weren’t used to is the landscape. 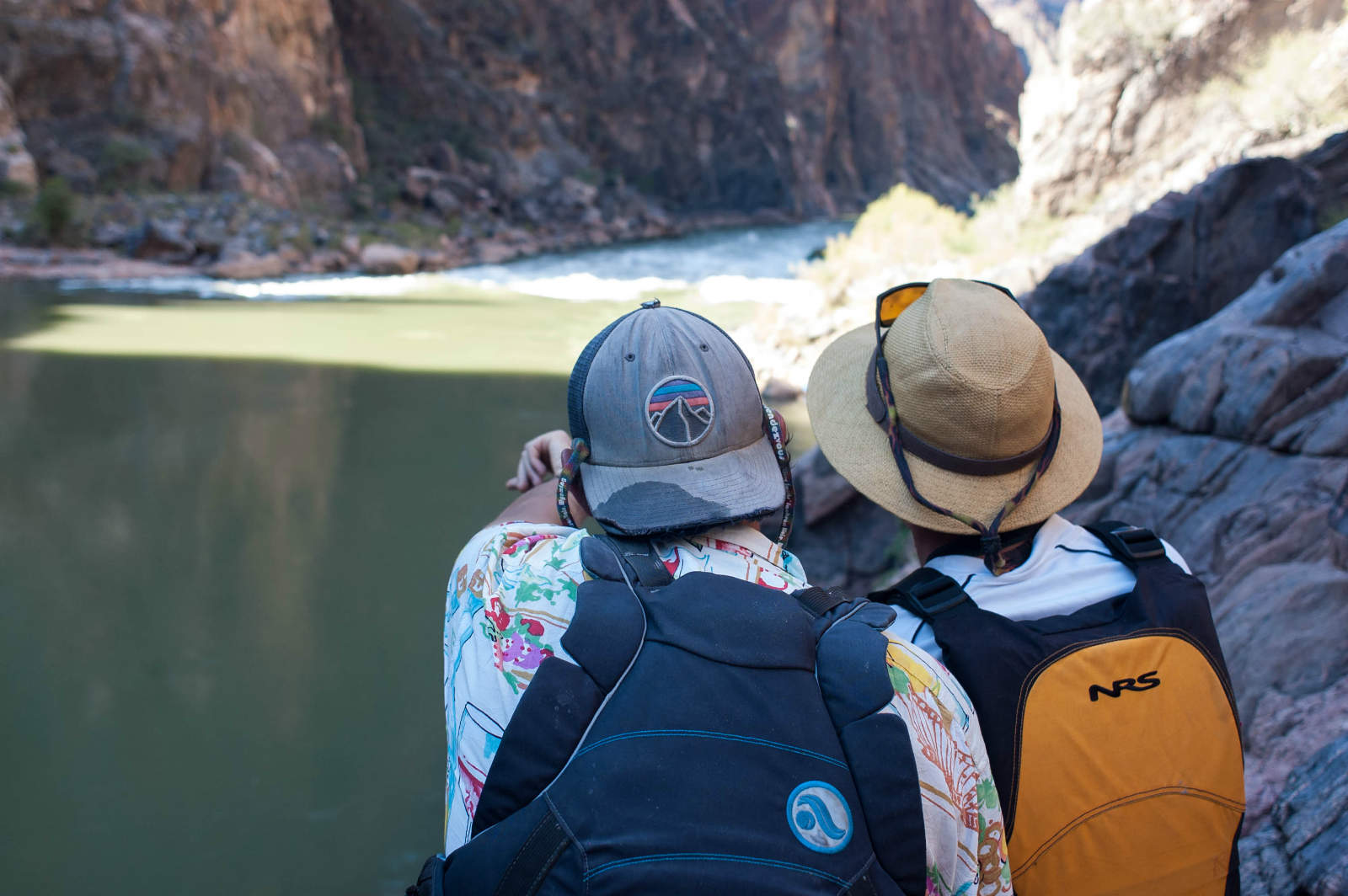 Scouting Horn Creek. Little did we know just how harsh this rapid would be on our crew. After our second flipped boat was pinned against the rock by the roaring rapid, we were given a greater perspective of the power of the river and made sure to take more care the rest of our way down the river. It took 30 minutes of pushing and prying to set the second raft free. The motto “rig to flip,” rang clearer than ever. 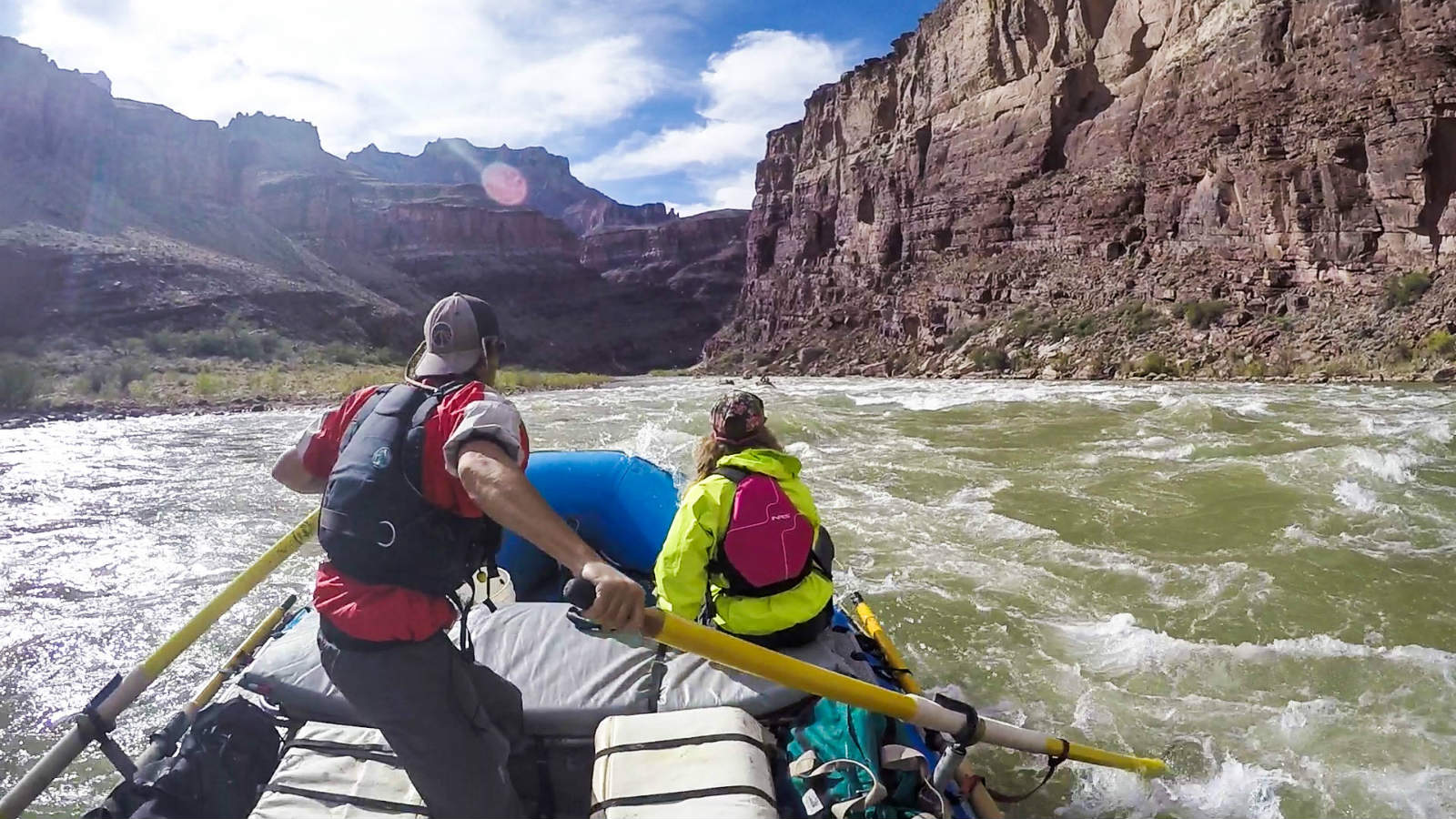 Day ten: after breakfast was eaten and cleaned up, and the boats rigged, we learned that scouting a rapid the night before isn’t good enough. Due to the fluctuation of the river volume controlled by Glen Canyon dam, Deubendorff wasn’t the same rapid as it had been the night before. But we put it behind us. Half the crew jumped out at Tapeats Creek to do a up-and-over hike. We climbed through the cliffside oasis created by Thunder River as it shoots out of a crack in the cliffs above, creating moss lined waterfalls that starkly contrasted the sparse desert landscape surrounding it.

The majority of our crew live in temperate Jackson and were caught off guard by the dry heat higher in the canyon once we left the cool mists of Thunder River. Without the shade of the steep cliff walls, we were quickly reminded we were in the desert. But Sarah and I felt at home and finished the hike in a dreamy trance, getting fully lost in the space we were in. 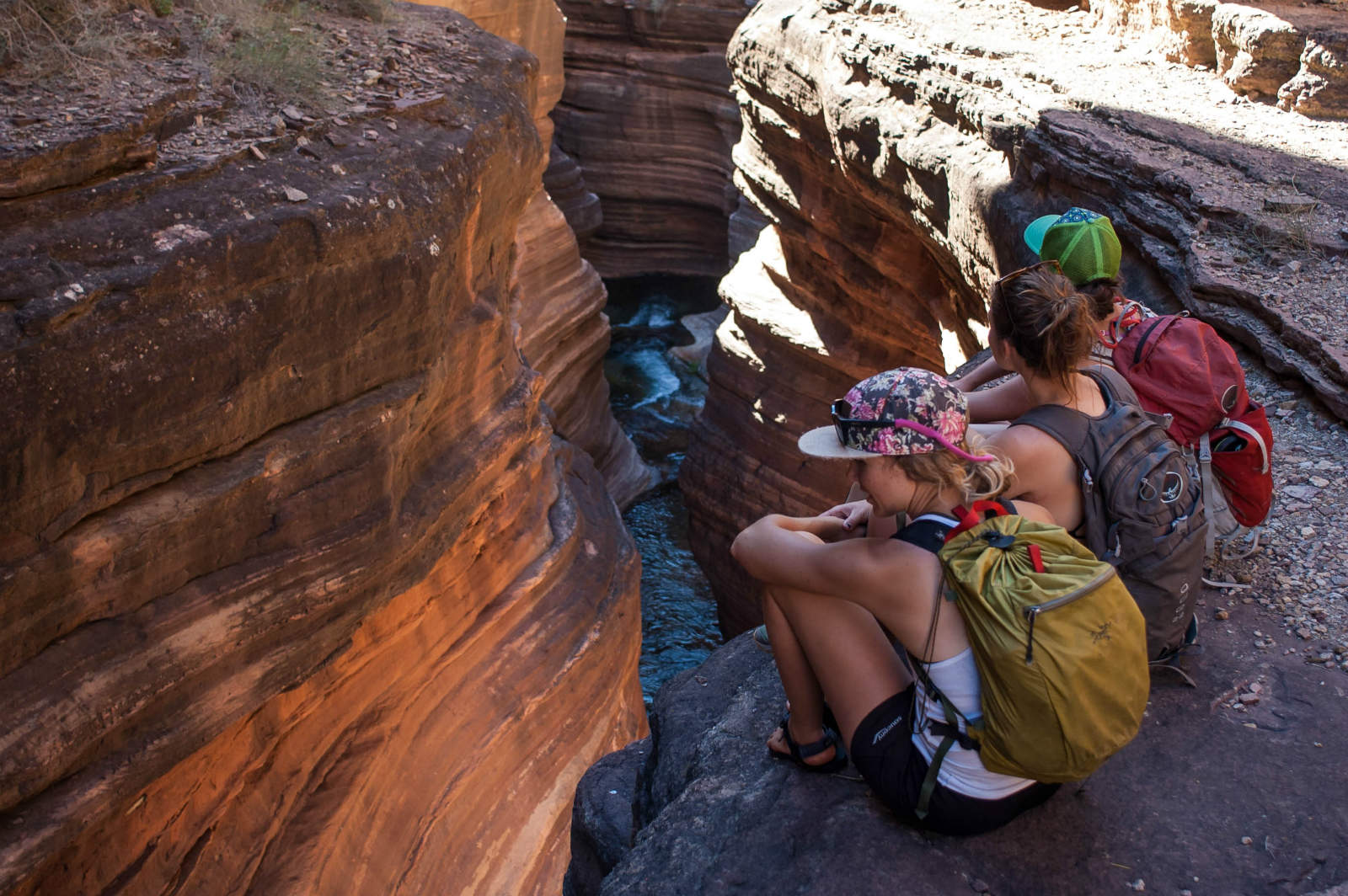 Every day we explored as much as we could. In the small cove where you park the boats at Bass camp, we set up slack line over the water where there was a calm pool deep enough to dive in. Most of the crew took advantage of the languid water to take a brisk bath. 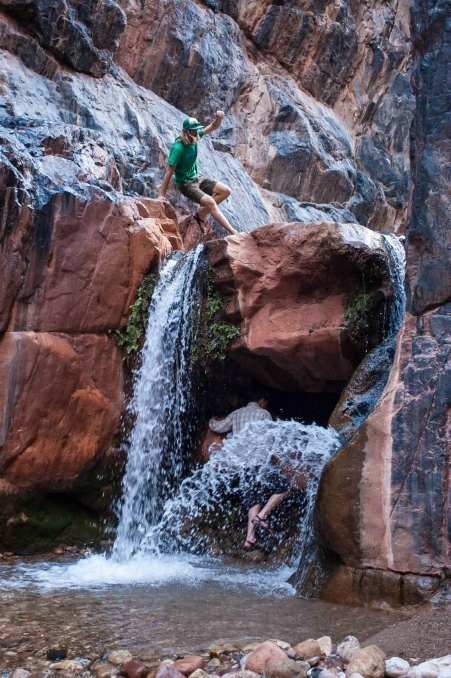 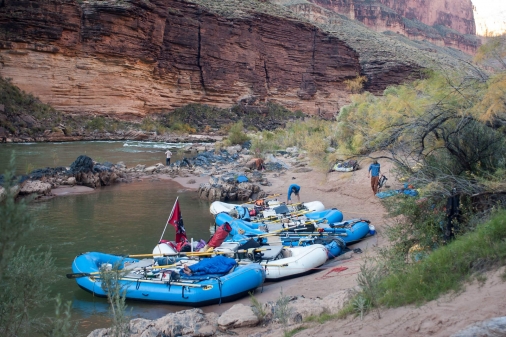 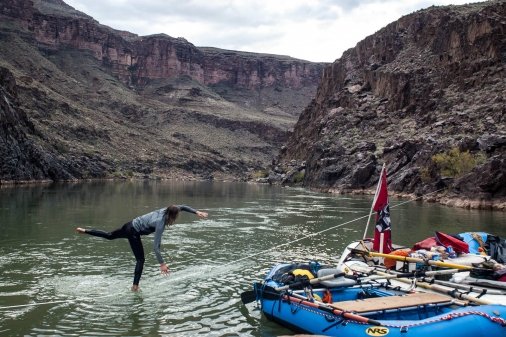 In celebration—or mourning—of passing the half-way mark, we laid over at Pancho’s Kitchen, a comfortable camp with a large, steep beach that continued back into the rock creating an amphitheater. We knew we were going to experience a “high flow event” that day and figured it wise to be off the river as it rose. In this particular camp, we could watch the water work its way up the beach and still have plenty of room. During high-flow events, a larger volume of water is released from Glen Canyon Dam in order to redistribute sediment throughout the canyon. We knew that the water would rise from 9,000 cubic feet per second (cfs) to 36,000 cfs, but no one in our group really knew what that looked like. 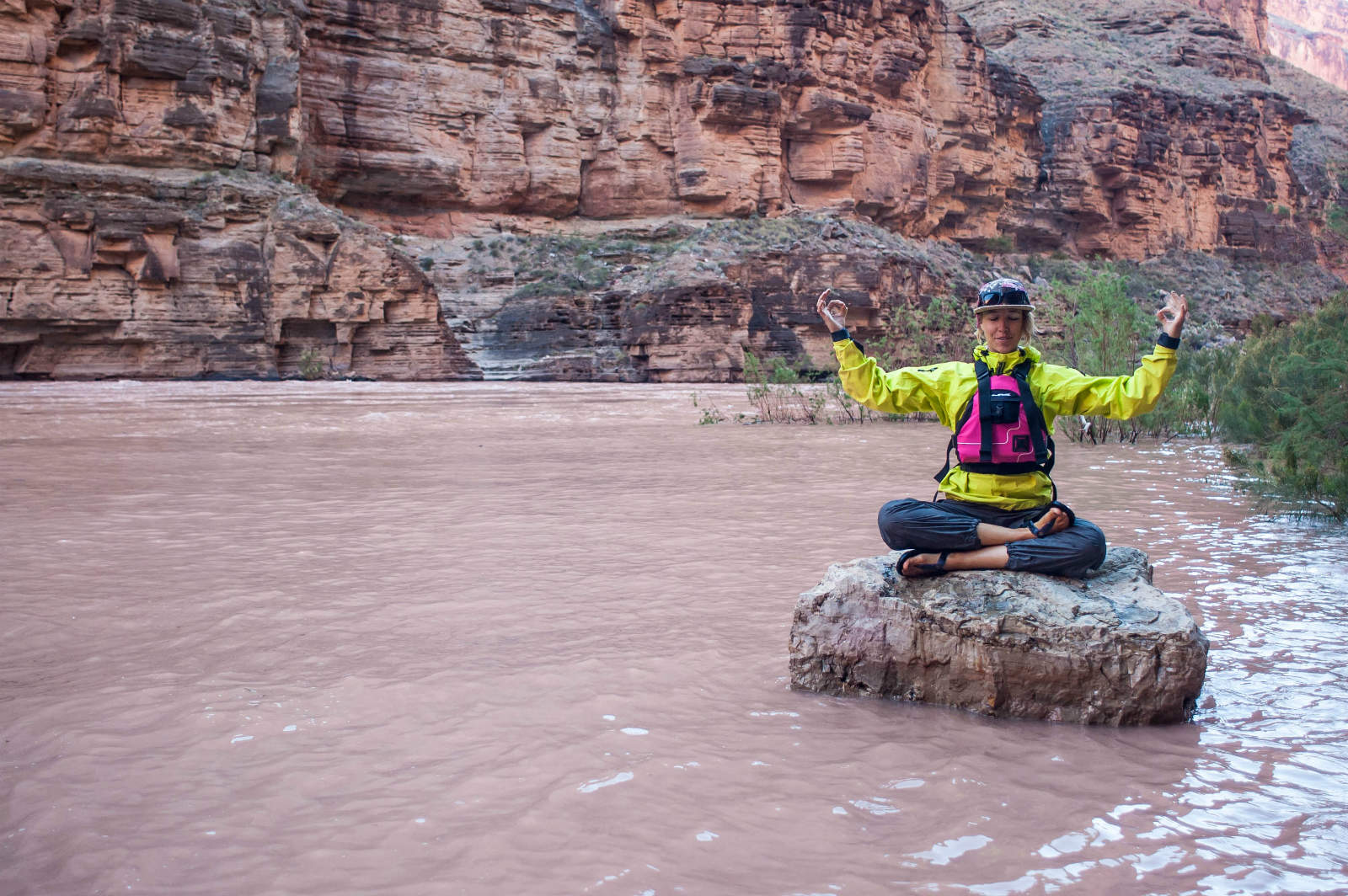 Within two hours the river volume effectively quadrupled. Standing at the edge of the river, like watching a bathtub fill, murky water covered our feet in less than a minute. The night before we had all put sticks in the beach to guess where we thought the water level would rise to, and within 30 minutes every stick was gone. It was a powerful reminder of the force rivers have and how dynamic they can be. The next day we took to the river ready for battle, knowing that with the increased flow some rapids would be bigger and the normal currents and eddy-lines would be much more powerful. 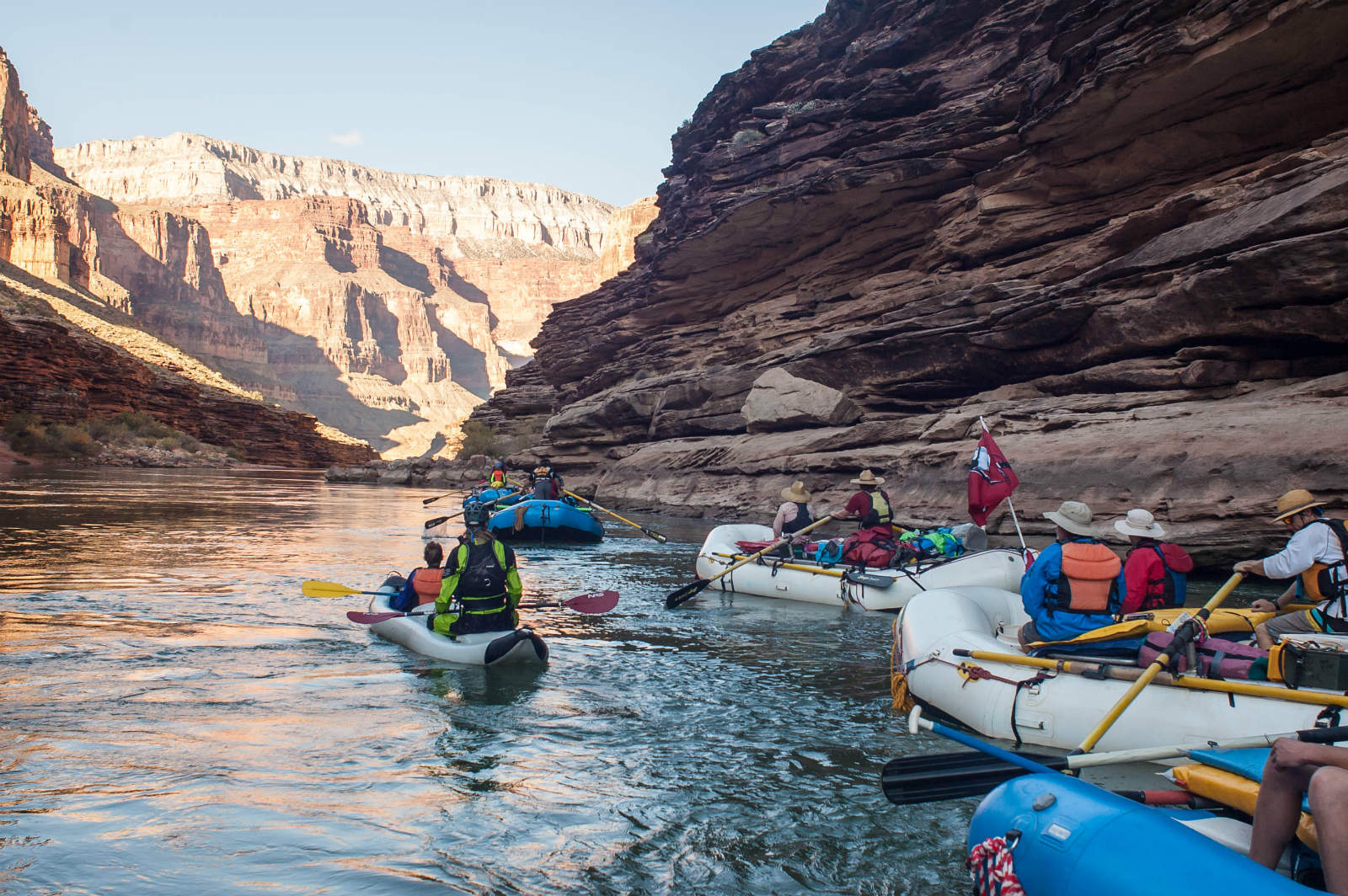 It made for an interesting change to the canyon and the river we now called home. Finding camps was a bit more difficult as a lot of the bigger camps were now under a couple feet of water. The pull into Havasu was spicy, but fortunately every boat in our crew made the eddy and we all had fun swimming or taking a shuttle ride on the ducky to explore the crystal blue waters of Havasu creek. The stunning contrast of the canyon walls against the blue water was enough to make us all shiver with amazement. We rode the high water the rest of the way out the canyon. 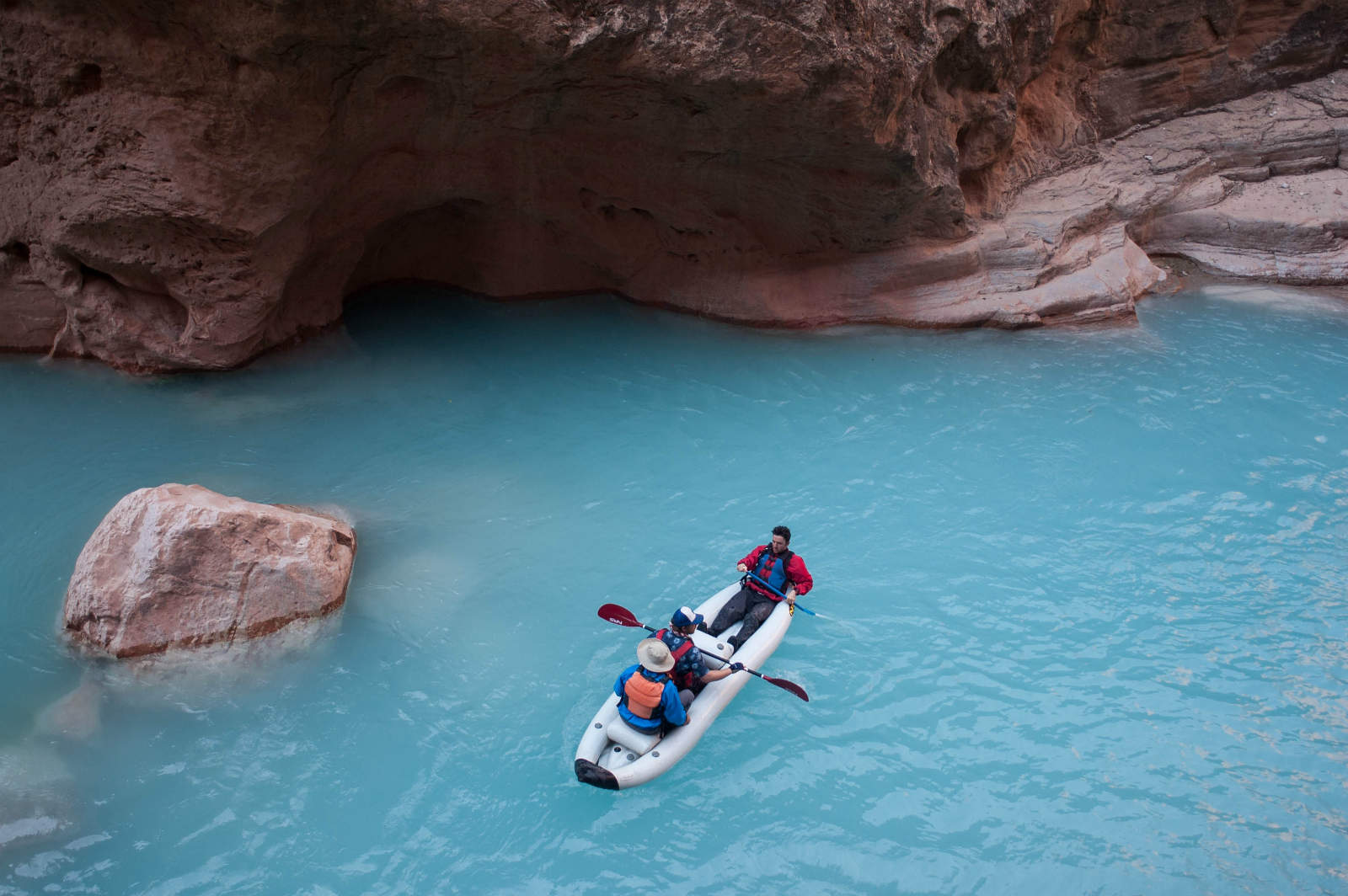 Pulling into Diamond Creek was a surreal experience. We had spent the past 18 days and 226 miles of river exploring side canyons, climbing on the variety of rock types, playing like big kids on the shores of camp beaches, and being completely overwhelmed by the grandeur of the canyon. We had no contact with the outside world and had been living without a care. It was the first time many of us had felt so lost in time—nothing mattered but the river, the rapids and making camp. I didn’t want our trip to end. I wanted to stay on that river forever until I knew every turn and side canyon. 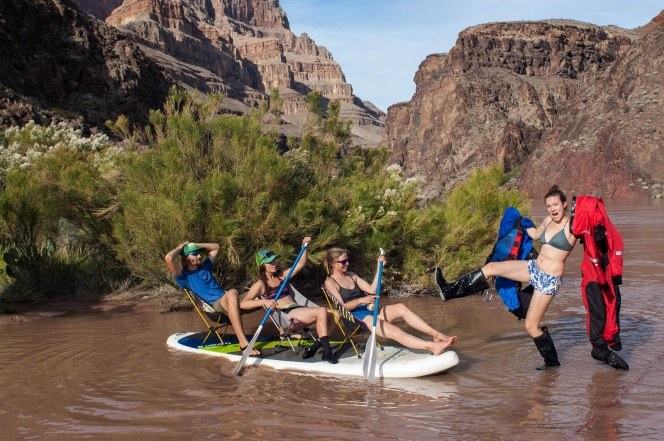 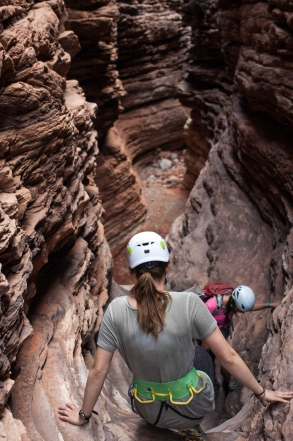 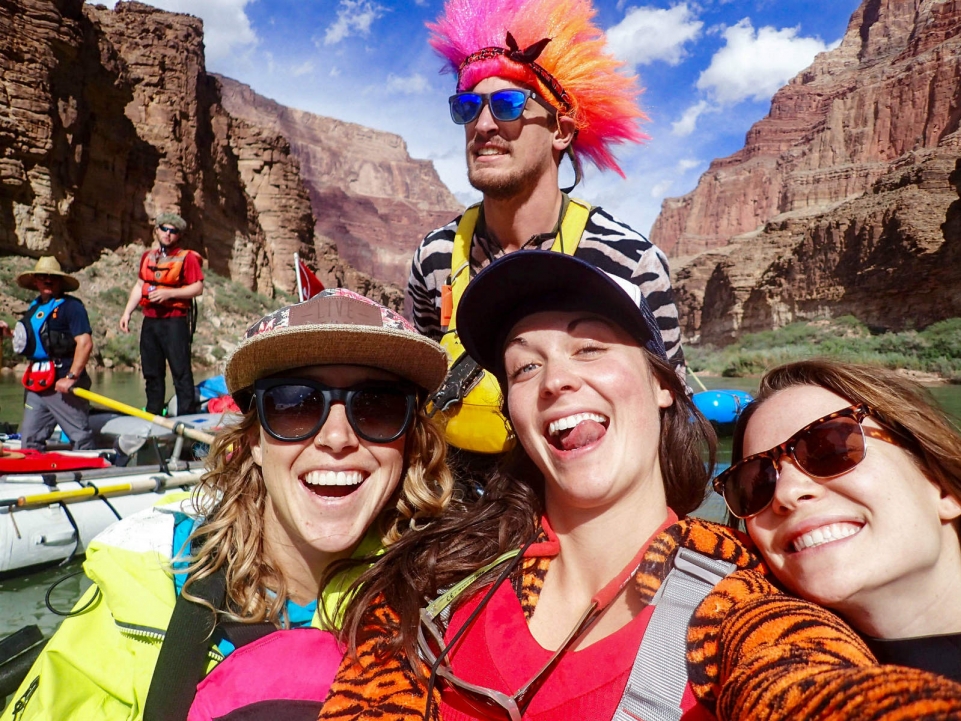 If the pain of leaving the river wasn’t enough, the first news we received as we set foot on shore was that a new president had been elected—one with little care for the environment, for our rivers, our national parks, our wild and sacred places. I had spent my entire life up to this point politically dormant,  believing I could live my life how I wanted without being affected by politics.

With this new administration taking office and their complete disregard for climate change and the destruction of our wild places, our National Parks and public lands as directly related to human impact, we risk losing something that can’t be restored. And on this particular day, at the end of one of the most important experiences of my life, built up by the magnificence of mother nature and her inspiring beauty, I realized the magnitude of what was at stake. Like being kicked in the gut when I was already down, I was stunned and heading into battle. 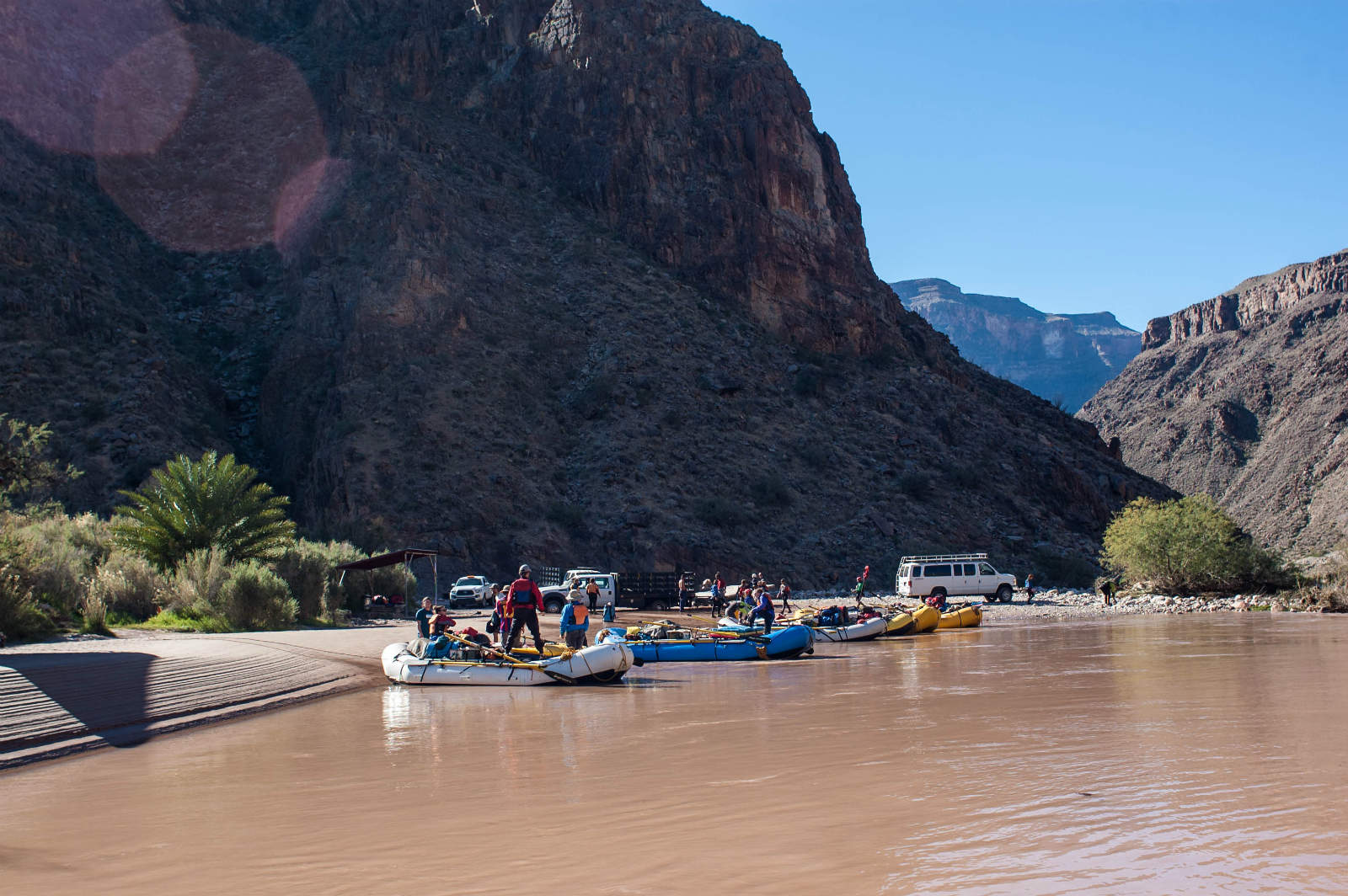 The Grand Canyon and all of the other lands it represents are fragile and sacred, and once they are exploited they will never be the same again. I began my journey down the Grand a misfit. But I left the Colorado River a soldier, willing to fight to preserve the rights for future generations to be changed by the Grand, to feel lost in a sacred world, to explore a pristine wilderness, and to be moved by nature. 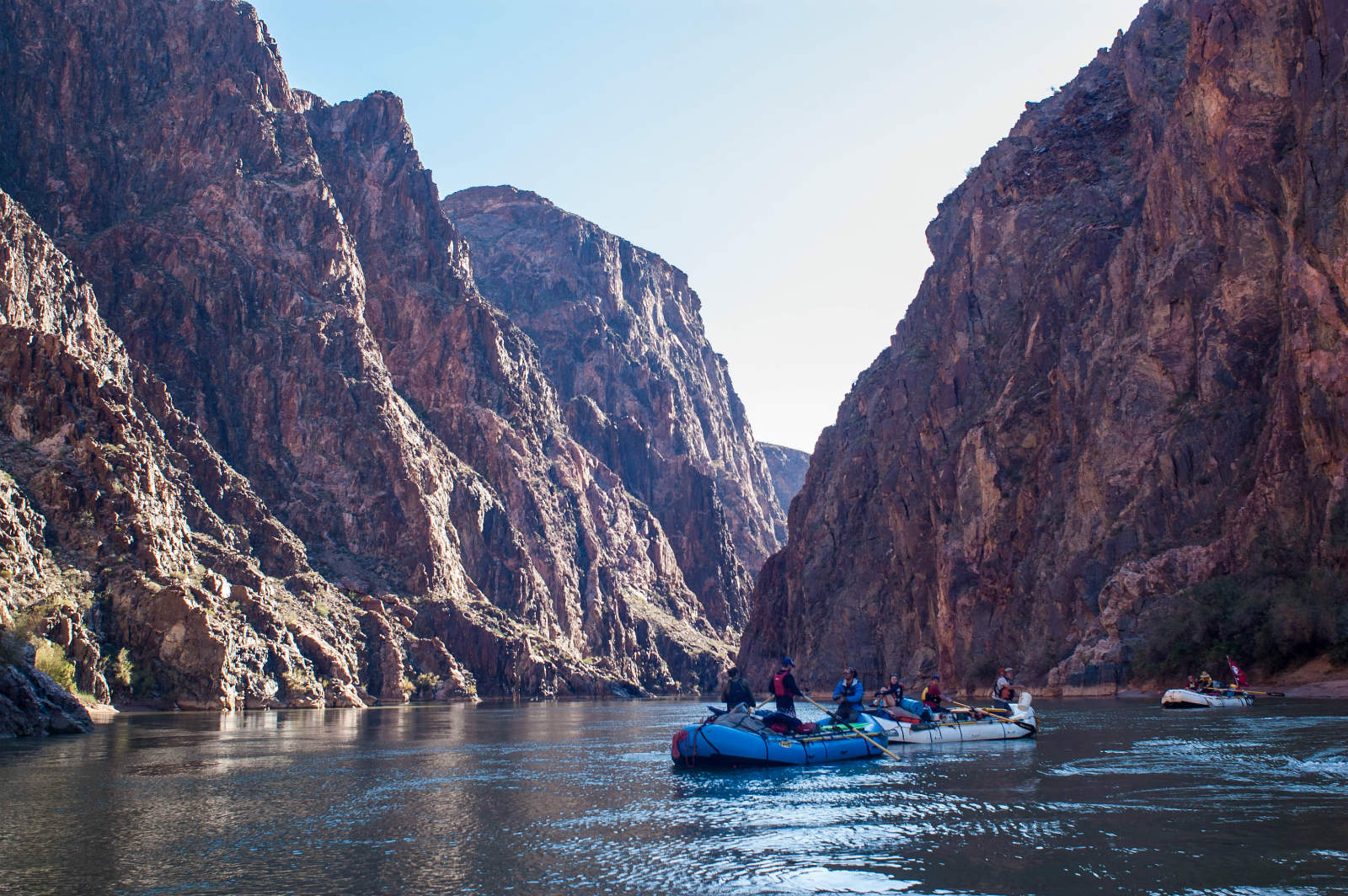