The Basics of Video Boating on the Gauley

As I reach my paddle over the lip of the drop, my eyes are already at the bottom righthand corner of the rapid where the eddy I must catch waits. My heart pounds. I’ve kayaked this river many times, but today is different. Today, I’m completely alone and there’s a video camera below my spraydeck. Today, I’m responsible for videoing 40 rafting guests and their guides. That means running every rapid clean, catching all the right eddies, and doing it all with enough spare time to climb out on the slippery rocks and position myself with a camera to shoot the rafts coming through the chaos behind me. In that moment, I briefly recognize it’s not the rapid, but the responsibility, that’s making my heart pound. Then, I drop into the whitewater.

From the beginning, it has been thoroughly ingrained in my brain to never kayak alone. From my debut class II run to my first class V, there had always been someone there. If I got surfed in a hole, pinned against a rock, or had to swim out of my kayak, someone was there to help me put it all back together again. But now I was a video boater, and I had traded the moral support of having a buddy over my shoulder for getting paid to kayak.

Video boating—kayaking ahead of commercial rafting trips, hopping out on rocks to video the rafts coming through the biggest rapids, and editing a short film about the trip at the end of the day—is the best job most paddlers never knew existed. With rafting companies operating on rivers all across the country and the world, many kayakers find themselves raft guiding as a way to be on the water everyday and be close to rivers to kayak in their time off, but on a few rivers across the globe, there’s a better alternative: video boating.
The New and Gauley Rivers are not only where video boating originated, but companies there also continue to staff the most robust teams of video boaters in the world. With Gauley Season upon us, boaters flock to the renown river for six weeks of recreational releases, and some boaters don’t just come to paddle the section—they come to work. A select few will paddle the class V Upper Gauley alone with video cameras and get paid to do it. Could you be one of them?

The kayaking
The first thing to consider if you want to become a video boater is whether you’re kayaking level is up to par. Video boating requires fast, independent, dependable and versatile kayaking skills. For me, the biggest hurdle was becoming comfortable kayaking alone, so before you read on, take a moment to consider whether or not you’re prepared to be the first boat on the water in the morning with the closest boaters at times more than 15 minutes behind you. Next, the job requires you be really good at leapfrog. You must get ahead of the rafting trips, stop to film them, and then catch back up and pass the trip again in time to set up for the next rapid. This commitment to keeping up with the commercial trip means a confidence that you can stay out of trouble, and if you do swim you can execute a quick and independent clean up. Lastly, when you’re scheduled to video a trip, you never know what the weather conditions and water levels will be like, so you must be prepared to kayak the New and Gauley rivers at any of their vastly different water levels.

The videography
If you are a solid class IV-V boater, the kayaking portion of this job will be the easy part. The challenge then becomes the shooting and editing. From capturing quality footage of rafts charging through rapids to keeping your camera steady and dry on the banks of the river, this isn’t your average videography gig. In addition, it’s essential to capture faces and expressions in addition to the great action shots. This will mean grabbing introduction clips of the guests at the put-in, getting up close shots of their faces when they’re jumping off rocks, and capturing lunch scenes on the banks of the river to make them feel as though you’re creating a film of their full experience rather than just a reel of the rapids. 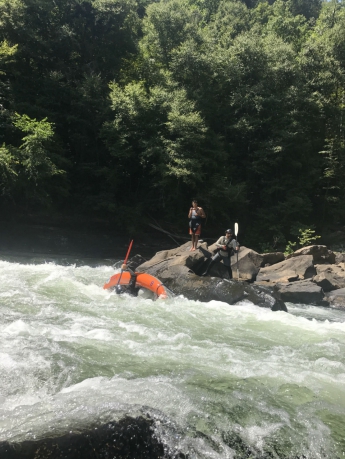 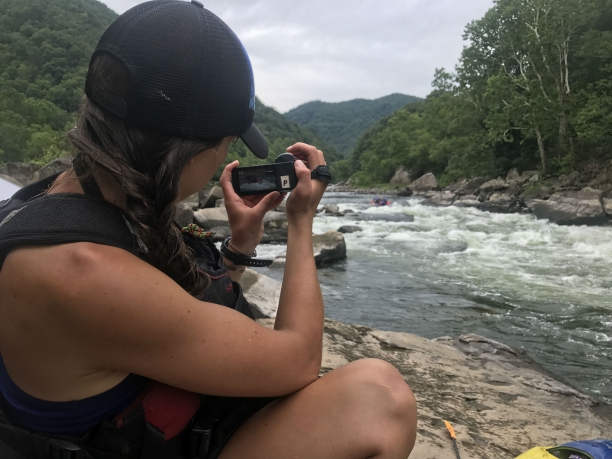 The editing
If your heart wasn’t pounding on the river, it will surely start when you rush to the editing room to create a video of the customers’ trip within the allotted timeframe (before they get showered, changed and headed back to the lodge to watch said video). The biggest challenge is learning your way around the editing programs and making the process of splicing in slow motion, instant replay, music, transitions and catchy titles as seamless as possible. But don’t worry, if you don’t know how to use video editing software this part of the job can be picked up in a few practice sessions.

The personality
Video boating is also a sales job. As a video boater you are payed by the trip, but in some cases you can also make commission on video sales. This means, throughout the day, you’re working to develop a relationship with the customers that will make them want to watch the video after it’s edited, or purchase it even if they don’t have time to stick around and watch it with their group.

Think you’re up to the challenge? Gauley Season runs from the weekend after Labor Day to the third weekend of October each fall and the New River rafting season stretches April through October. That being said, landing a job as a video boater isn’t as simple as just applying and interviewing. Once you apply through one of the companies on the river, you will enter a training period in which you shadow other video boaters and learn the river, filming, and editing process.

If you want a feel for whether video boating is for you, one of the best ways to get started is to show up on the river and get to know the video boaters there—they’ll be the ones perched on the side of the biggest rapids with a camera in hand. Getting a personal referral for your boating abilities and personality goes a long way in the video boating world. Plus, it never hurts to get a little extra kayaking in.