The Sunday morning camp Oracle, coffee in hand, stopped in front of my raft. He shook his morning mess of grey hair and muttered something.  Then he looked at my raft and looked at me.
“The falls,” he said, “has a huge refusal wave. Huge!”
“What if we ask nicely?” I asked.
The camp oracle was in no mood for jokes. His voice dropped low and conspiratorial…“The only way to run Lochsa Falls is to….”

Sorry, I can’t give you the secret. Who knows what kind of bad river karma that could bring; it might be as simple as making it less fun for you, or it might be disastrous to all of us. In any case, nobody should ever put a river’s secrets in print. Besides, as we all know, it’s never the same river twice, so it probably wouldn’t do you any good anyway. 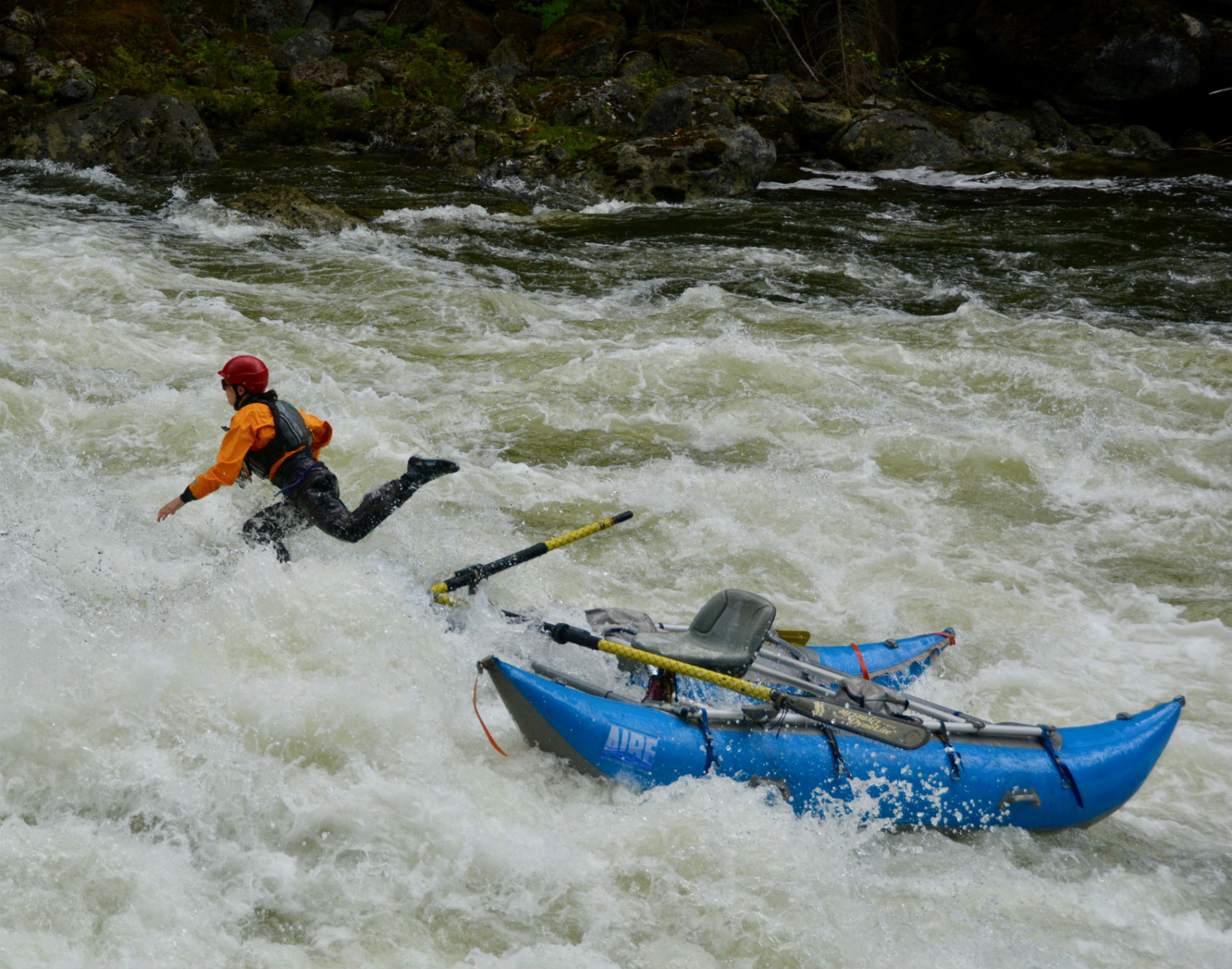 Saturday morning, my friend Justin Gonzales and I left South Dakota at 5 a.m. and drove 750 miles to arrive at the Lochsa River for the 2017 Memorial Day Lochsa River Madness.

Somewhere beyond Lolo Pass, Highway 12 met and paralleled the Lochsa River, which, at first, appeared to be a large creek. But it picked up water mile after mile as the snowpack slid off the mountains in roaring gushers and joined the creek, which at some point became a river, and then became a big ass river. And then became a scary, big ass river. In fact, the Nez Perce recognized its ‘big-ass-ness’ by naming it Lochsa, meaning rough water in their language. A fact also noted by Lewis and Clark who decided that this was not the best route to the ocean.

This rough water has become the impetus for one of the more (irresponsibly) fun whitewater festivals in North America—Lochsa River Madness, second only (probably) to West Virginia’s Gauley Fest. 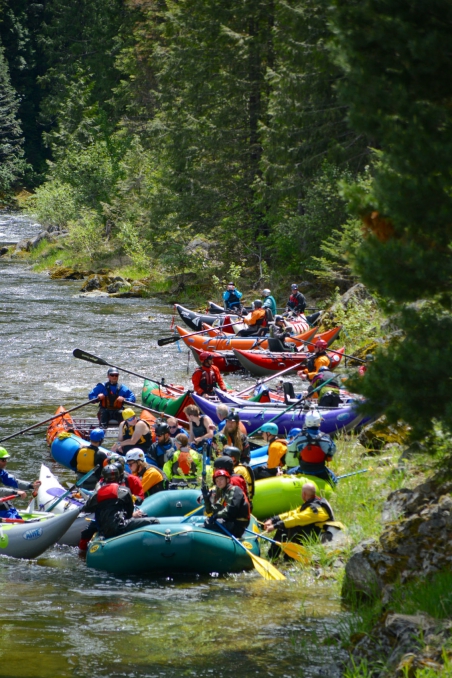 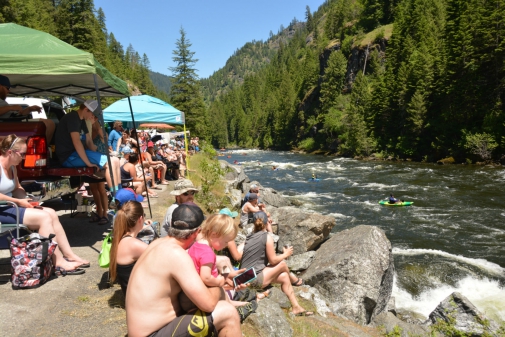 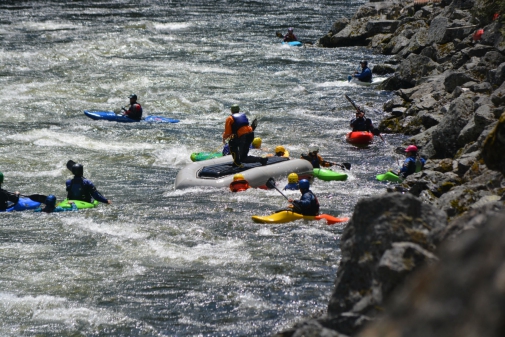 Just past mile marker 122, Justin and I met the madness. The roadside turnout was full of campers. Each campsite testified to the miracle of brightly colored plastic.  Just one word: plastics. Neoprene wetsuits and tri-laminate drysuits hung on lines of polypropylene throwbag line. While rotomolded polyethylene kayaks clung to vehicle racks. Hypalon, urethane and PVC rafts, catarafts, and duckies sat on trailers. 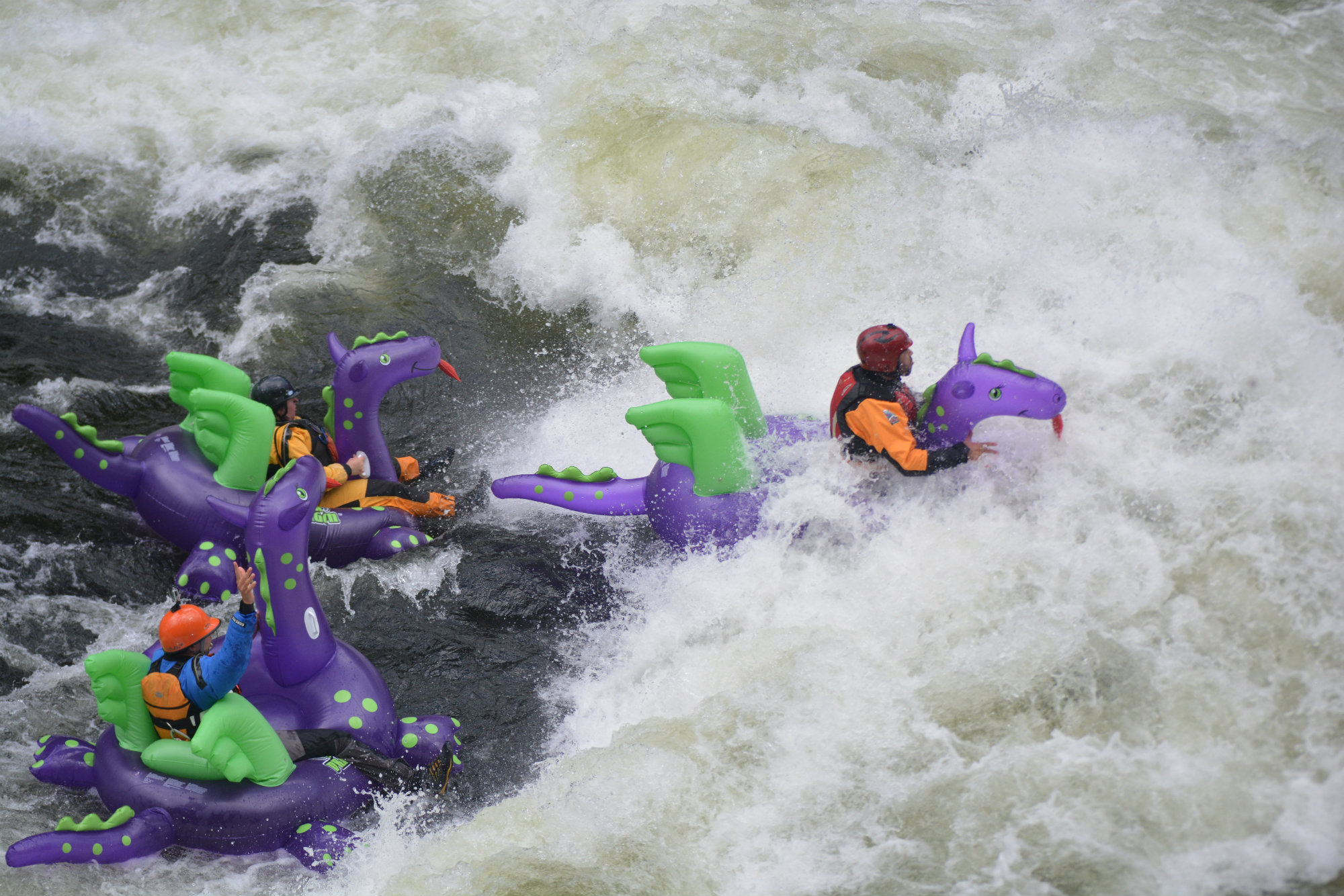 We found a stretch of ditch along the highway with just enough space between reflector poles to park the van and trailer. On this side of the river five actual campsites had, by creativity and necessity, been turned into sixty.

On the other side of the river, Wilderness Gateway Campground was the paying side of river life, the older side. Here, sites were $14 dollars a night and boundaries were respected. There were a few accidental tourists, but mostly it was the older crowd of kayakers, cat boaters, rafters. The four looped campgrounds had turned into neighborhoods of families. Little kids raced strider bikes, dogs formed small, well-behaved packs, and van living down by the river looked—well, domestic.

When the sun went down, a pair of women riding inflatable flamingo pool toys on the top of a van beckoned people to the group shelter in the Wilderness Gateway Campground for the nightly film show.

Justin and I walked over. A couple hundred people crowded into the shelter or milled around outside. A few brands were set-up, their reps offering a raffle, but otherwise, the commercialism was minimal.

The films were carnage-filled shorts, featuring Maytags and insane drops done in rafts and cats along with some cross-dressing antics on a multi-day. Nothing you couldn’t see on Youtube, but there was something novel about watching it with a community of river people. We oohed and aahed, whooped and hollered. A few bottles were passed around. 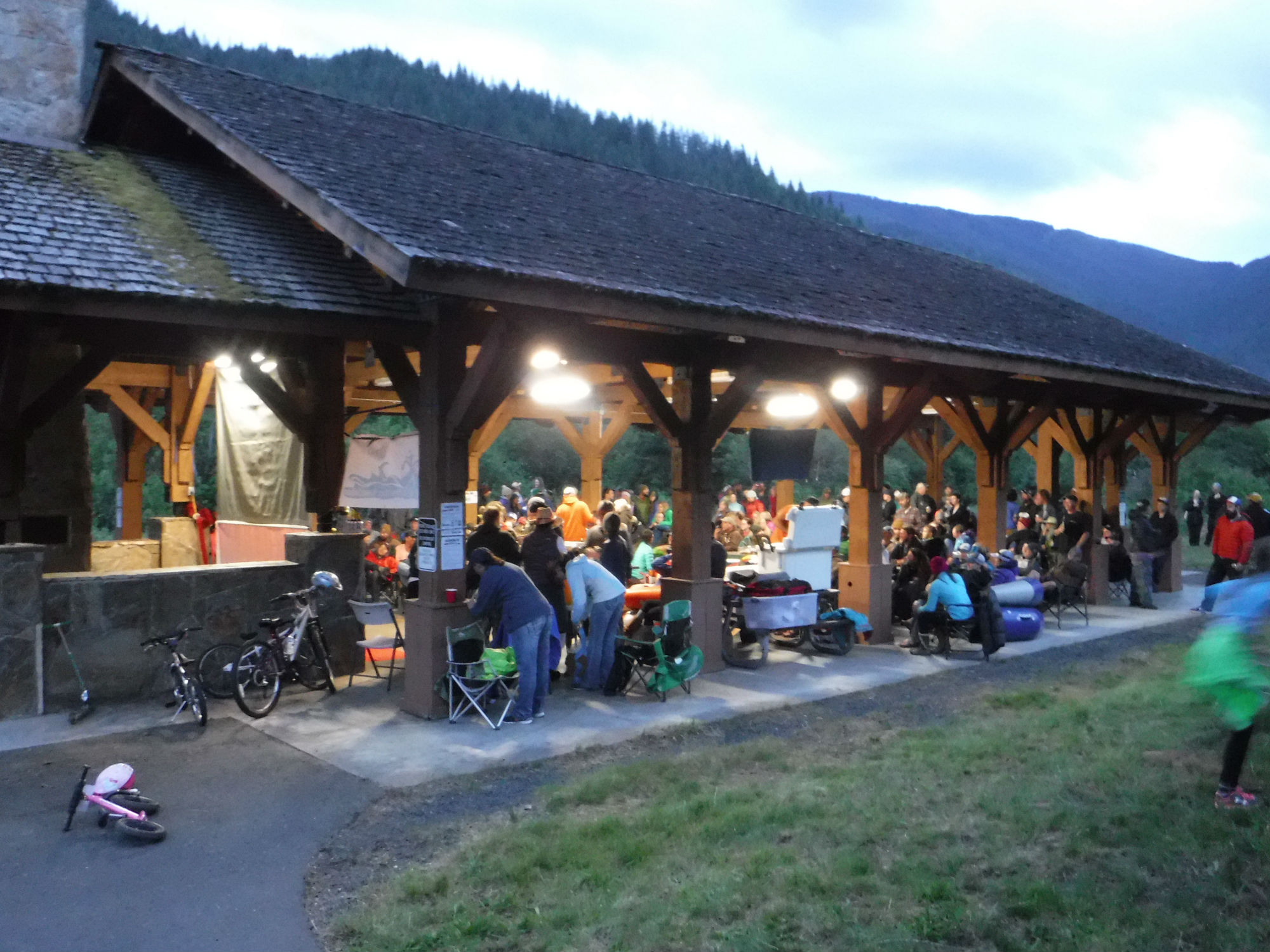 That night I slept in the van and Justin set up a cot in the ditch. This was the Van’s maiden voyage. I am a little ashamed of how comfortable it was and how well I slept. I worried about my dirtbag self.

In the morning, Justin had tales of two Sheriffs rolling up and a drunk woman crouched at the foot of his cot, mumbling incoherently into the night. I don’t repent the comfort of the van. But I know that life happens outside of it, which is cruelly balanced by the fact that sleep happens inside of it.

I heated some burritos in the morning and we rigged the raft—as the camp oracle teased us with unspoken beta. We drove to the Fish Creek Launch—luxurious by Idaho standards: bathrooms, a changing area and a wooden ramp to slide rafts down to the river. We dropped the raft out of the way and unloaded gear. 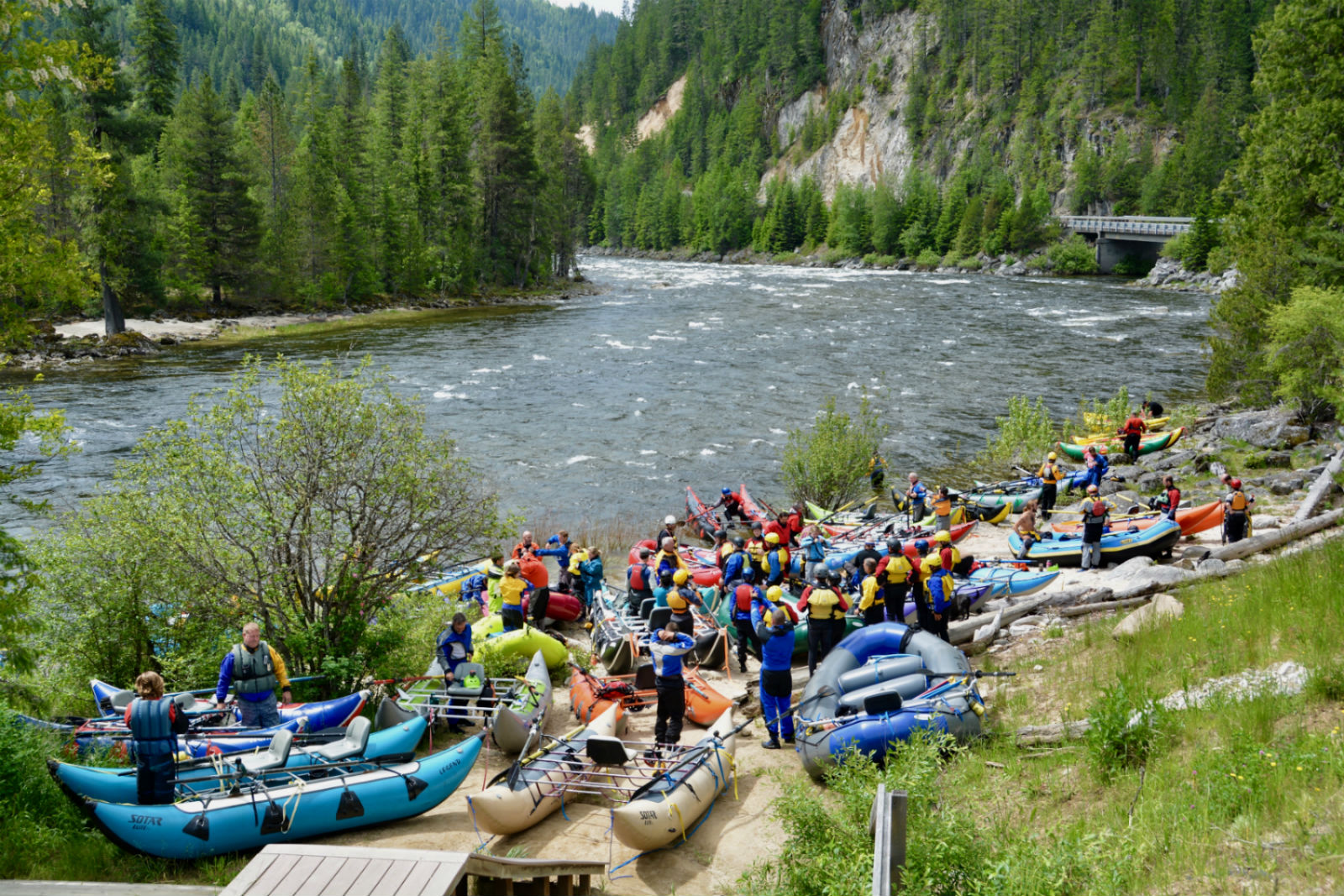 At the put-in, I approached a group getting ready to launch—catarafters Scott, Lee, and Richard and Diana the lone kayaker. They graciously welcomed us into their flotilla. Lee and Richard looked to be well into their sixties, which gave me hope that old age won’t suck.

I drove the van and the trailer down to Bimerick take-out and in five minutes hitched a ride with a pair of aging river rats who tried to tell me about every rapid until giving up at Fish Creek with a, “F it, you won’t remember any of this shit.  Just have fun.”

When I got back, everyone wrestled their way into drysuits and wetsuits and we launched. It was fun. Heart-pounding fun. It was easily the biggest water I had ever seen.  Miles of huge waves, where rapids like House Wave were not hyperbole.  We passed Killer Fang, Grim Reaper, and Bloody Mary, and then we were floating into the tongue at Lochsa Falls. 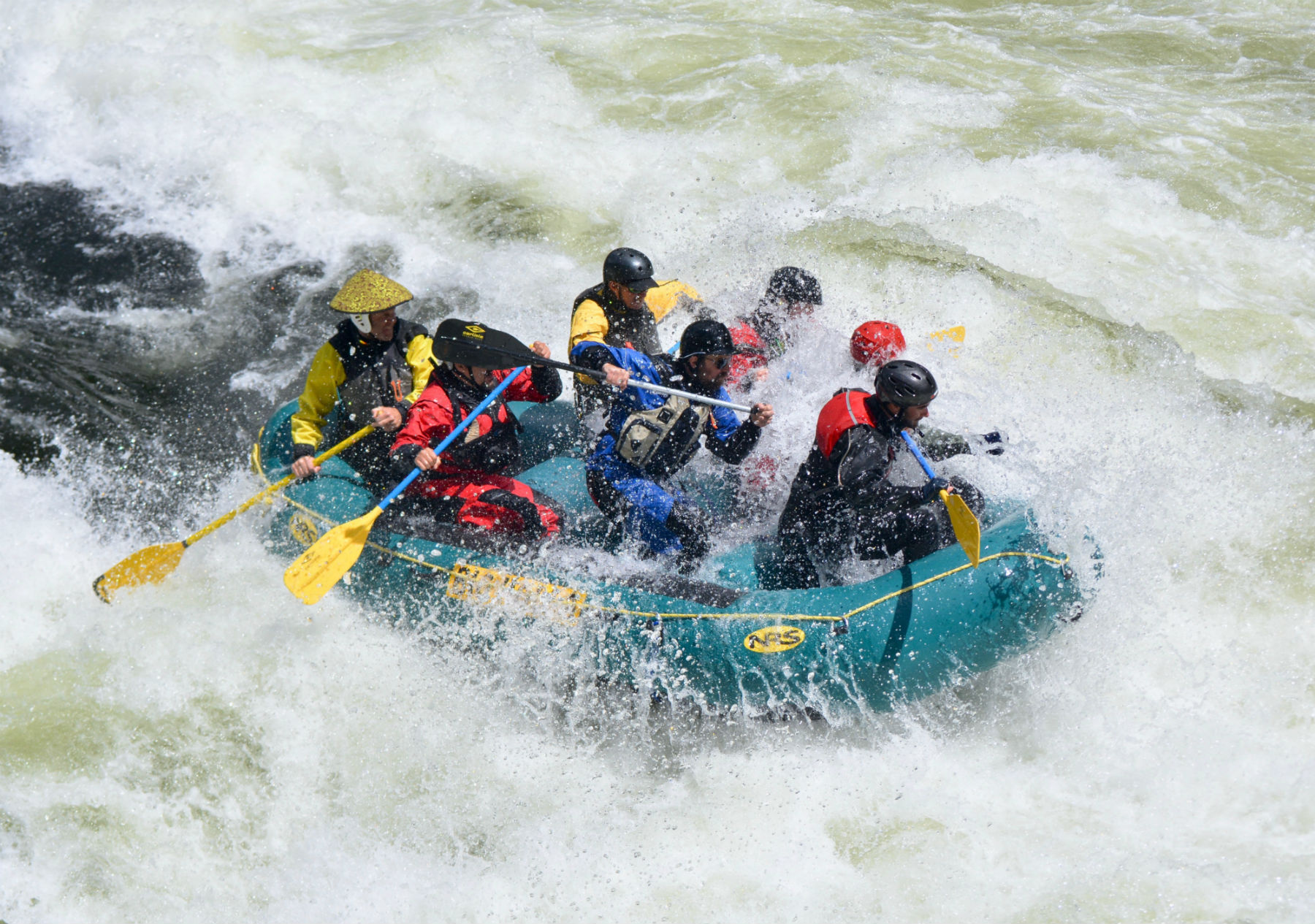 At mile 114 along Highway 12, cars lined the narrow road for a quarter mile in either direction. Port-a-potties, canopies, camp chairs, coolers and hundreds of people filled the turnout and spilled down the rocks beside the river. This is where the majority of the carnage happens. This is where people watch the river turn whitewater inflatables into pool toys. Beatdowns, flips, full-on dumptrucks, front surfs, back surfs, a wide variety of whitewater disaster is on display at the falls and an audience is there to boo when people make it, cheer when they don’t, and drink a lot of beer regardless. 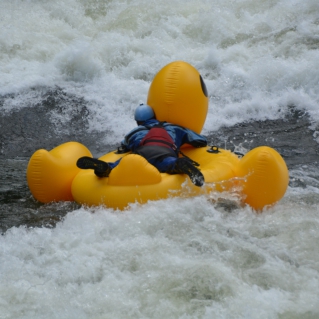 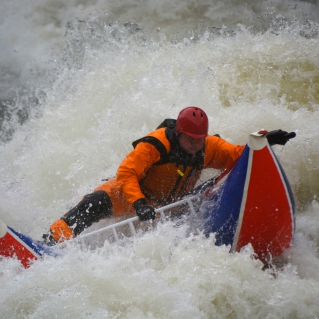 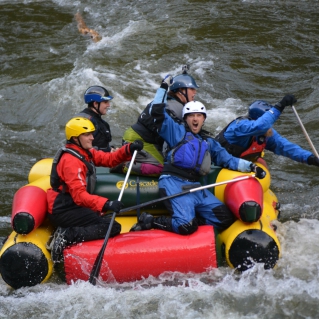 From a river perspective, the falls come fast. It looks like you’re dropping into a huge foaming mouth.  I remember being a little farther right than I wanted. Over the roar of the falls I heard a collective “ooh…” the same “ooh” you heard in school just before you got sent to the principle. Or the “ooh” you heard in the bar when you accidentally insulted someone twice your size. Same idea but this “ooh…” meant you were about to get trashed in Lochsa Falls. And then, at the last minute, just before we hit the surge I remembered to—do what I can’t speak about

Richard, the old guy in the cat behind me, hit the far-right line. His cat shot in the air, dumped him and landed upside down. He rode the tubes upside down through the wave train, appropriately labeled “Picking up the Pieces,” until he could get it righted. Lee also flipped his boat at a downstream rapid called Splitrock. No real trouble though. Boats were reunited with their owners and we all made it to the takeout in one piece. 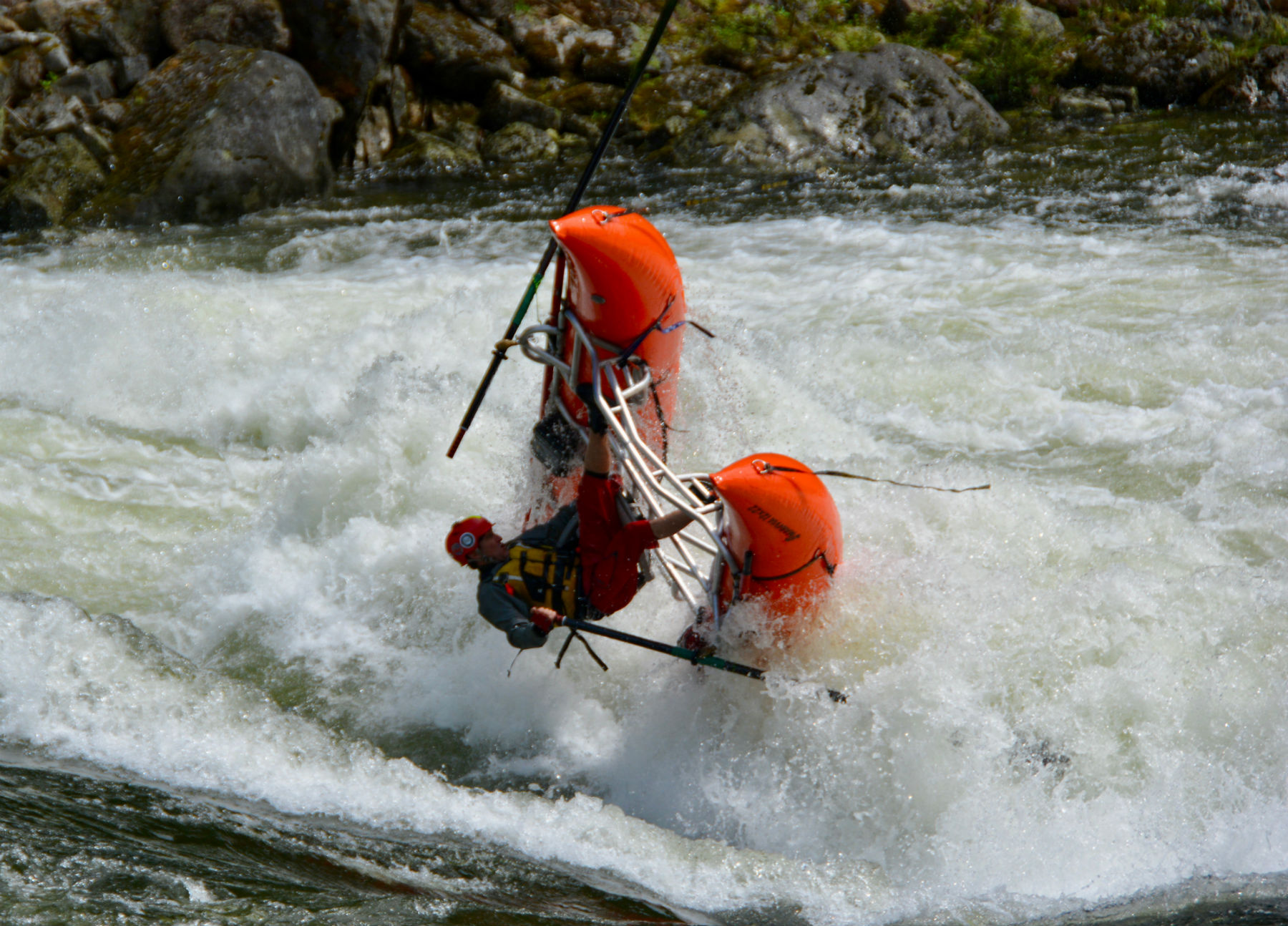 That night we found an open campsite in Wilderness Gateway and ditched The Ghetto. We paid our 14 bucks and backed into the parking spot. It was a great spot if you didn’t mind that someone or some animal had pooped on the two best tent sites, even though the camp toilets were less than a hundred feet away. While I can’t imagine the purpose of the can’t-make-it-to-the-privy dump, the message, at least to me, was clear: the van was a good purchase.

That night we walked over to the group shelter and watched the official weekend videos of Lochsa Carnage of which there was only one. Editing a video, partying and boating all take a lot of time and most people opt out of editing and submitting a video. An Aire Couch was raffled off, the kind of river accessory that only the truest of dirtbags and multi-day-ers can appreciate. The other items included your typical, free stuff: tees and hats and bags. The video was solid, featuring a one minute, anal-sphincter-tightening, high-side beat down along with some good disasters at Lochsa Falls: flips, intentional and unintentional surfing adventures where the “refusal” wave was more like a “maybe” wave. 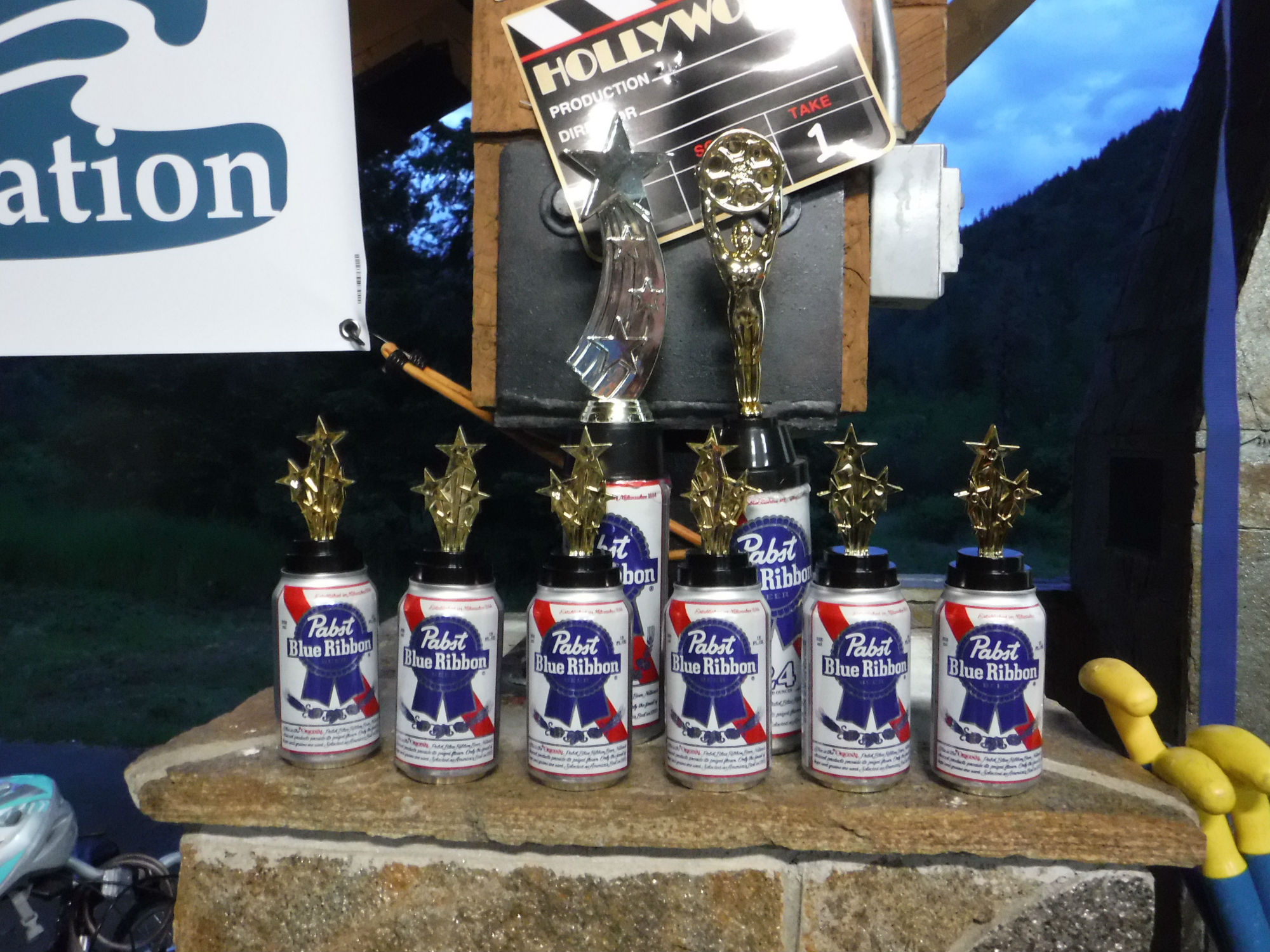 At some point in the night, there was a short scare.  Someone yelled, “Medic, Doctor!” Someone in the back of the crowd was writhing on the floor. Heart-attack? Drug overdose? Late-onset dry drowning? The possibilities were sort of endless. A few minutes later I heard people say he was breathing, which, at a whitewater festival is pretty good.

The next day was another day of rafting. New people, a shuttle ride with some creepy CPR dummies and a driver drinking Natty-Ice at nine in the morning, another six inches of river on the bridge, swimmers at Lochsa Falls. You know, the usual madness.

Editor’s Note: All photos courtesy of Idaho Whitewater Association, a volunteer and member-driven whitewater group dedicated to promoting the appreciation, understanding and safe recreational use of the whitewater river resources within the State of Idaho. IWA is responsible for throwing this annual shindig.