A Raft to Ski Expedition on the Tatshenshini River

“You guys are crazy, but it might work.” That’s how Tatshenshini Expediting, a local outfitter in Whitehorse, Yukon, first responded to our expedition idea. Rafting the Tatshenshini to ski in British Columbia and Alaska required hitting a very slim window of conditions, one that was not promising even days before our April departure. A scouting flight revealed four ice bridges and many challenging portages through the first narrow canyon—not to mention a frozen Alsek lake portage two weeks down river. With the spring thaw approaching and ten friends ready to chase this dream together, we committed. Whatever that meant. 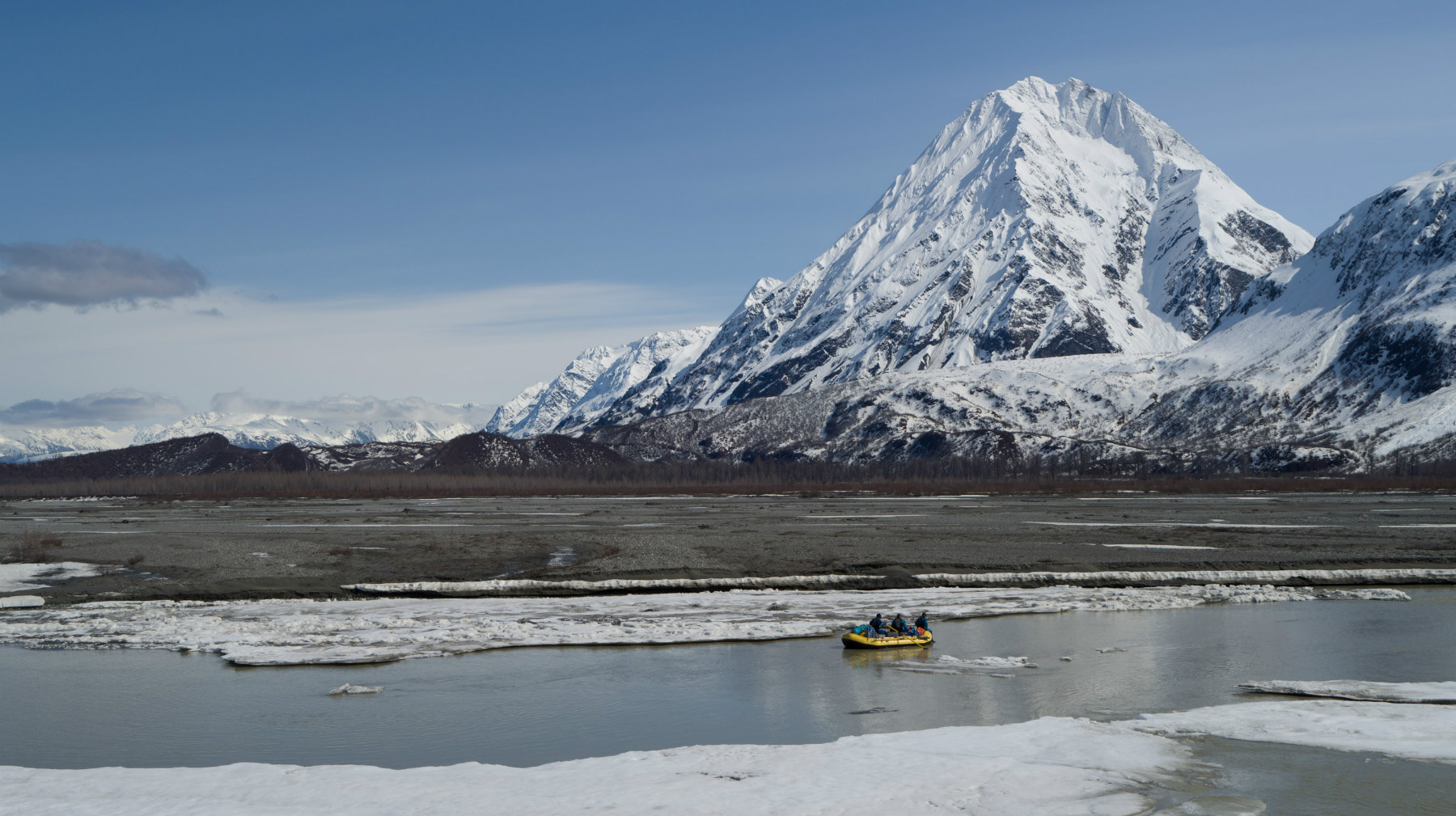 It all started a year prior, Mason and Joey were browsing through a bookstore when this river stole their attention. A guidebook cover showed rafts rowing toward blue glaciers and snowy ridgelines. Potentially combining two of their favorite ways to travel in the mountains, a raft-to-ski expedition after the Tatshenshini’s ice breakup was a must.

The group came together as a bachelor party of sorts—in the least likely location. Ten friends from Boulder, Colorado coming together for twenty river days, all as Mason’s last big adventure before tying the knot. Planning a multi-day river trip is already a beast in and of itself, but to add in an exploratory ski mountaineering component demanded a diversified team. Half the group came from a background in expedition paddling and stout whitewater. The other half consisted of passionate-to-the-core skiers.

We relied heavily on found photos of the river to clue us in as to where we might find ski lines to the water. We poured over Google Earth for hours, mapping and approximating slope angles and measuring approaches. Managing risk and expectations within a group this size was just as much as a concern as the frozen environment we hoped to float through. Establishing roles as river, ski and medical team leaders was vital. 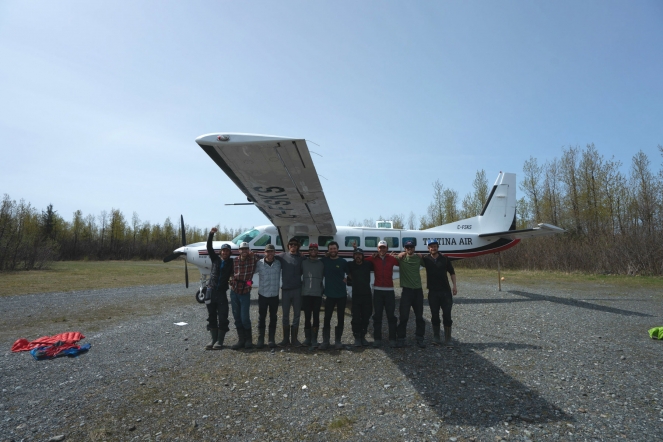 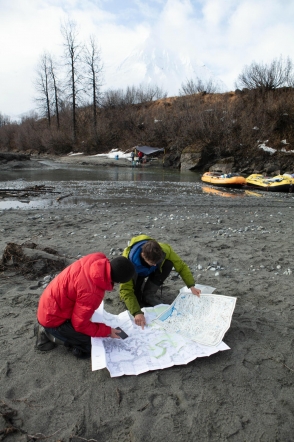 Day One didn’t begin on the river, but in the snow along the edge of Haines Highway. It took hours of snowmobiling and ski touring our supplies down the frozen access road to the Tatshenshini’s put-in at Dalton Post. With some incredible luck, we hit the banks to find a small, but flowing river. The trip was going to happen.

The next morning, we rigged for the first time. Even for the most experienced multi-dayers, rigging a raft for a ski expedition proved to be challenging. Where do ten pairs of skis go? How do we keep ice axes accessible—but not detrimental to the rubber—in the event of an ice bridge and mandatory river exit? As the paddlers played Tetris with snow gear, the skiers had to figure out how best to layer for winter paddling under drysuits for their first time. Soon enough though, we were on our way down the narrow beginnings of a spring river in the Yukon. Waist high ice banks kept our sights confined to a small thawing corridor of water and my nerves grew in anticipation of what could potentially block our path miles downstream. 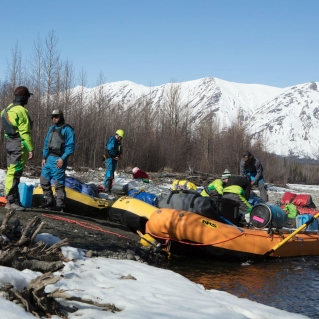 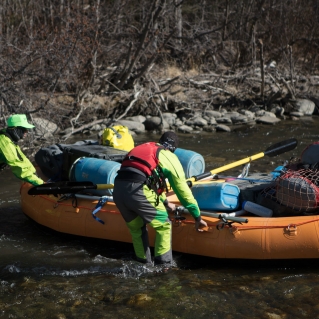 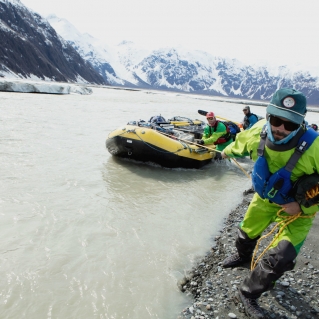 Spencer led the way on his paddleboard, our three 16-foot rafts following cautiously as he signaled “all good” around each bend. No ice bridges yet. Shallow rocks would catch and spin us from time to time as raft-sized ice sheets floated alongside. The river flowed faster as the banks and forest steepened into a canyon around us. We entered the harrowing area that our scouting pilot had sent photographs of.

Though not particularly large or difficult, the rapids gained in size as the ice banks morphed into cold, dark undercut death zones that would be oh-so-unforgiving in the event of a swim. Most were able to tune out from the expected danger and enjoy the task at hand, and before we knew it, the gradient lessened, the river straightened, and we laughed with a huge sigh of relief. The Tatshenshini was completely free-flowing and the ice had broken up just days prior to our launch. 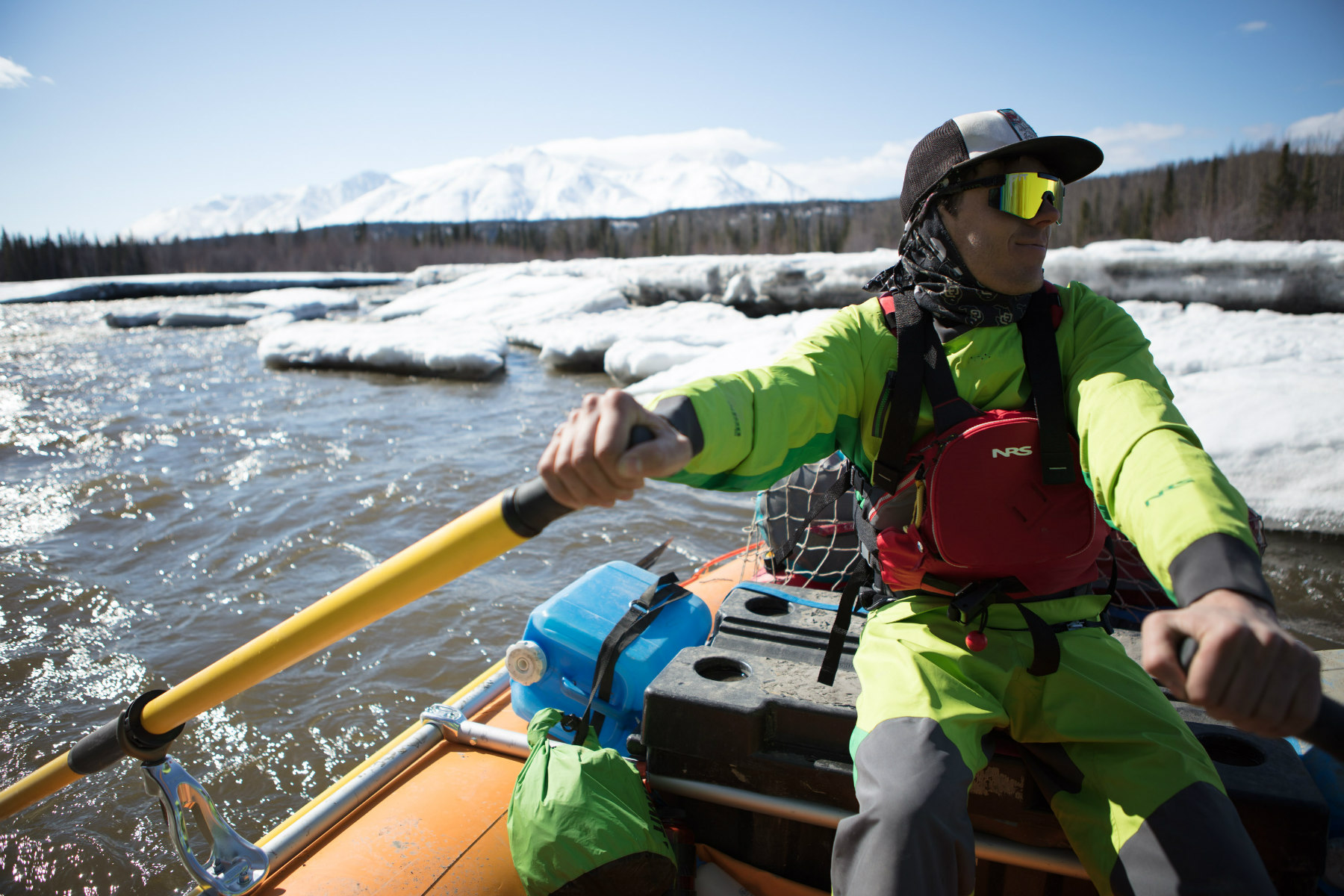 Lunch stops that first week were anything but normal. We anchored boats into the frozen banks with ice axes and then ran, or danced, in circles to regain warmth and circulation. Fleece onesies and down jackets under our drysuits were as necessary as the ridiculous amount of rations we brought.

To add to the absurdity, a particularly annoying seagull with a notched wing, who we named Jonathan, joined our lunch scene for days. He constantly took flight when he could tell we had cameras rolling, and he made sure to sit on the rafts to keep an eye on things anytime we left. 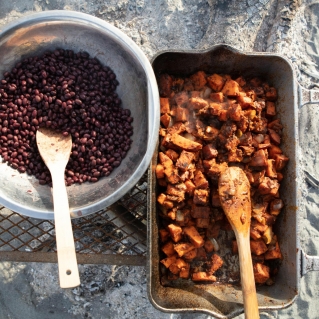 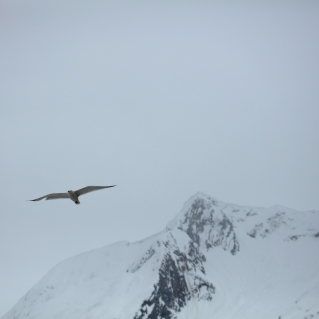 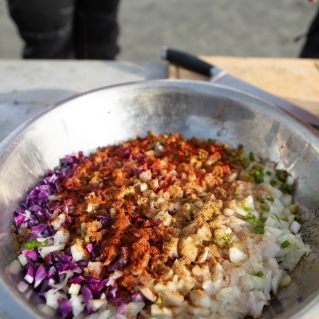 After a monotonous week of mellow paddling, routine chilling rain squalls and driftwood fires at soggy beach camps, we finally hit the confluence with the Alsek River. Moody skyscapes cleared as the sun rose, illuminating massive snowy peaks all around us. We had entered the mountain range we set our sights on a year ago.

Now on the Alsek, the river easily tripled in width, fanning out in braids that could lead us into an endless maze if our group ever became separated. We rowed closely, studying each fork, each ripple of current in hopes of choosing the right sequence of turns to hit the banks of a ski zone we spotted across the valley. 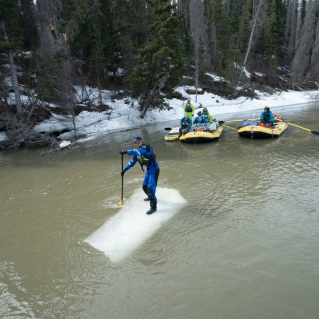 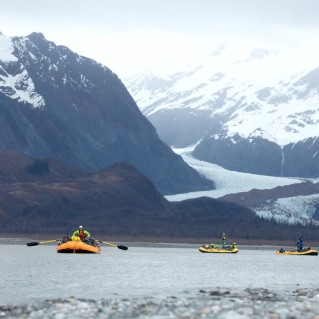 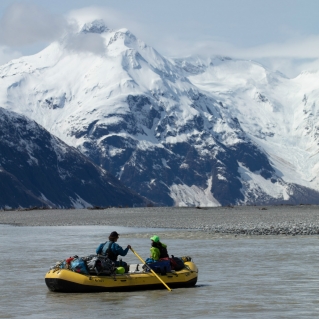 A 4:00 AM alarm welcomed our first day of skiing. Roughly a mile of bushwhacking, creek crossings and boulder field traversing separated us from the toe of the Netland Glacier. Our objective was straightforward: to work out the kinks of our newly formed rope teams and get an up close look at the lines we had memorized on Google Earth. Gaining over a thousand feet from the river, it was surreal to shift our perspectives on where we were. The skin track ran parallel to grizzly tracks as we entered a glaciated valley. We toured up to the border of Alaska then skied back into British Columbia, chased by the beginnings of our first proper storm. 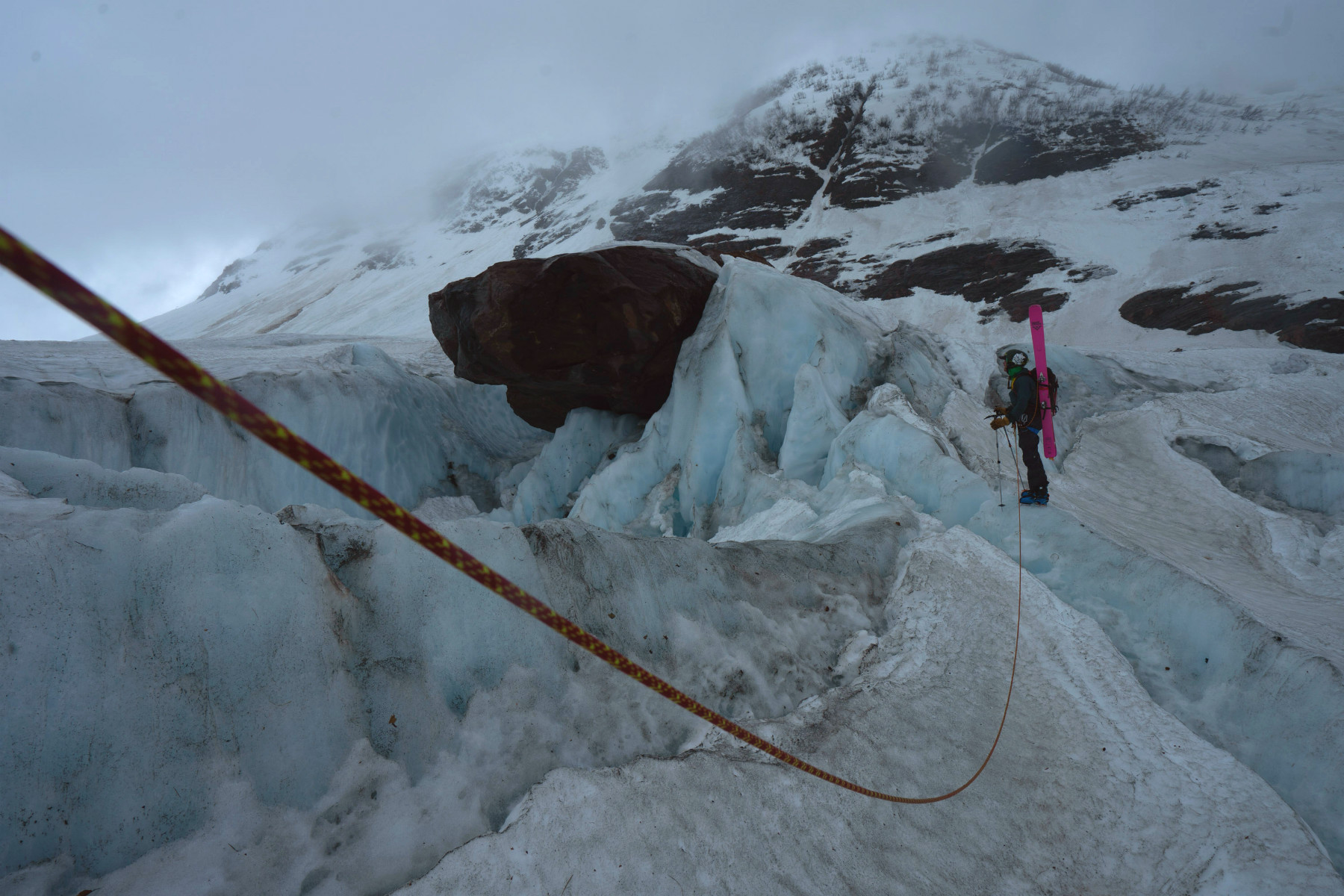 What began as fat flakes on the river’s edge gave way to relentless rain and deflated hopes of powder skiing. The group sat tent bound for days. Our kitchen slowly flooded and deteriorated. The creek that was once only as deep as our muck boots swelled to the point of needing to ferry rafts back and forth for meals, pushing along with oars like a gondolier.

The sun returned, and skies cleared giving way to a blissful window-shopping state. More lines sat a few miles downstream. Lines that proved to be mostly piles of avalanche slide debris. The inches of rain we had received saturated the snowpack, causing slides on almost all facets of the peak. The slides sent thundering echoes through our tent walls just days prior. And now we faced the idea that this whole skiing thing might not work out. 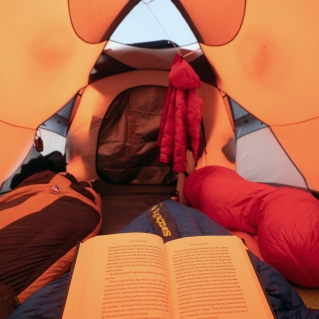 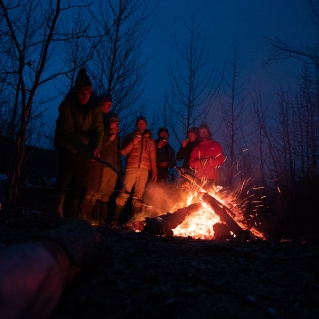 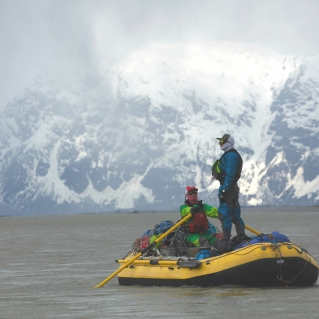 Down to the next zone we paddled, crossing into Alaska and immediately finding river couloirs around the first bend. Ecstatic, we eddied out in a slight side channel at the edge of the snow and peered upwards. Only a brief moment of silence passed before three of the guys frantically dug out boots, unlashed skis from one raft and raced through the snow with a boot pack.

The line had near perfect spring corn, albeit littered with rockfall from the shadowing vertical walls. It offered a tall 1,500-foot run with a consistently steep slope angle. Looking out from the couloir, the view was narrowed by the cliffs, only seeing a sliver of the river. A quick lap on this had us skiing back to the rafts an hour later, then off to chase down the scouting team who had continued down river to select the next camp. 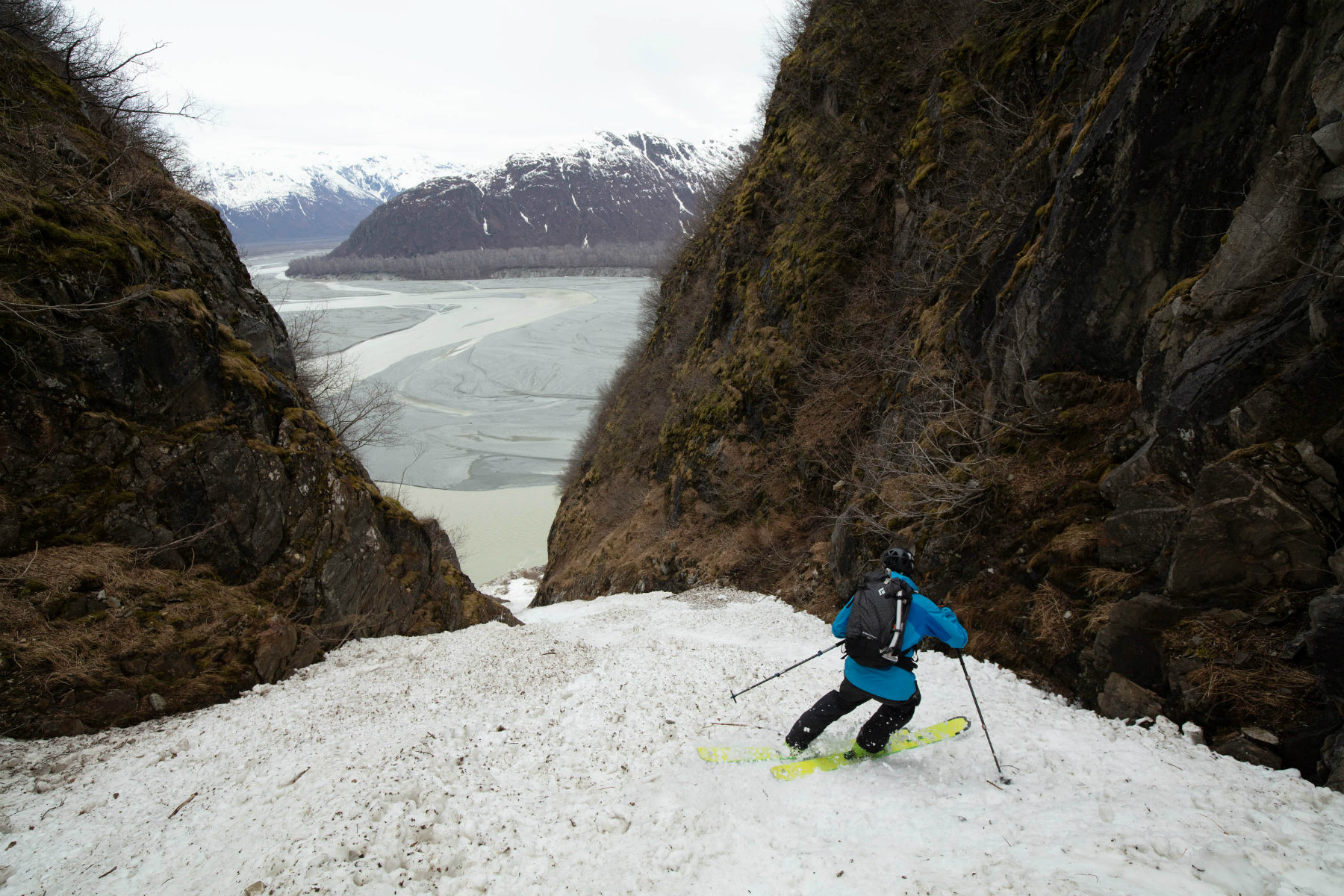 With a few days of clear weather forecasted, we set up for our final ski stint below the Walker Glacier. A soft sandy beach provided a perfect place to set up camp and we walked barefoot on the sunny days. Signs of spring blossomed from the brush around us. One ski team set off up the glacier to explore deeper lines and ice climbing potential. The smaller team embarked on the most ambitious bushwhack to date, high up through devil’s club and willows to access another snowy ridge.

One line eyed from camp for days, proved to be an utterly aesthetic, gradual ascent to a craggy 4,000-foot summit. I returned from the glacier mission in time to pick up some radio chatter above. Four of us sat on the beach, warmed by the sun, shirtless with our feet in the sand, as the little dots transitioned and one by one, arced perfect high speed turns down the smooth rolling slope of spring corn snow. 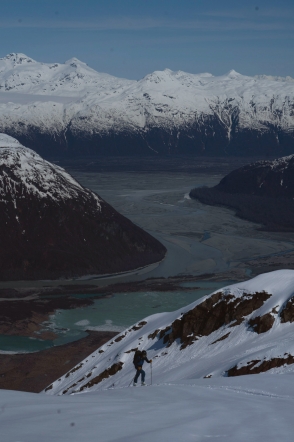 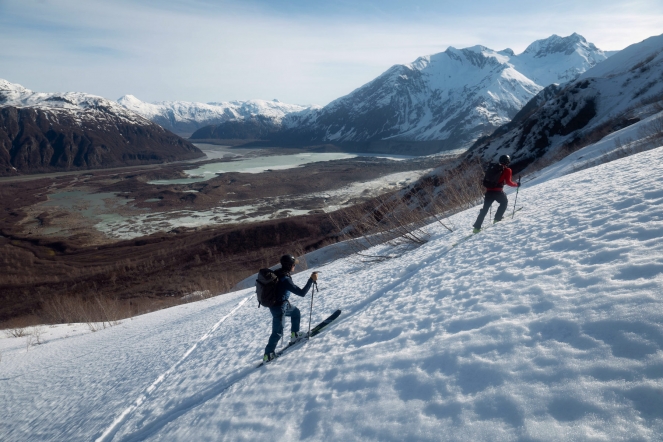 We hooted and hollered, watched through a telephoto lens and called in our excitement over the radio as the group finished their run. In that moment, everyone felt like the dream of this trip had become a reality. Though envious of the turns myself, watching Joey and Mason rip down an Alaskan summit—like that guidebook cover—gave me a huge feeling of satisfaction. The teamwork and time spent in the weeks to get here satisfied me. The friendships and group dynamics that developed satisfied me. But most satisfying of all was simply existing in this perfect moment—feet in the sand as my friends skied the run of their dreams. 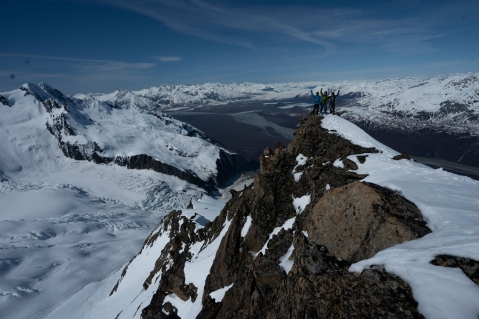 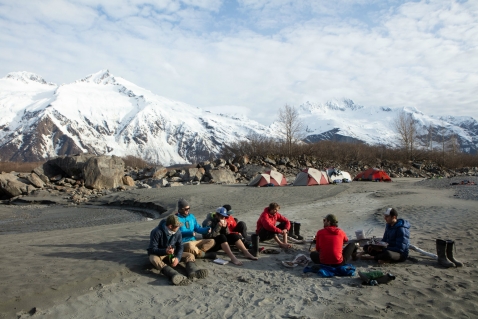 Not more than a day after, we sat tent bound through another rain cycle. With the ski portion of the trip accomplished, it was time to work on our takeout strategy. A few days—and the large, frozen Alsek Lake—separated us from an airstrip near the coast.

We moved down river in the next weather window. The mountains shrank as we neared the ocean. Turquoise water and white ice blurred with milky browns as the Alsek River merged with the lake. Five separate glaciers fed the lake and winds had packed all of the icebergs at the entrance. That evening we de-rigged the rafts and made a mile portage around Gateway Knob, across dry river stones that would be underwater in another month or so. 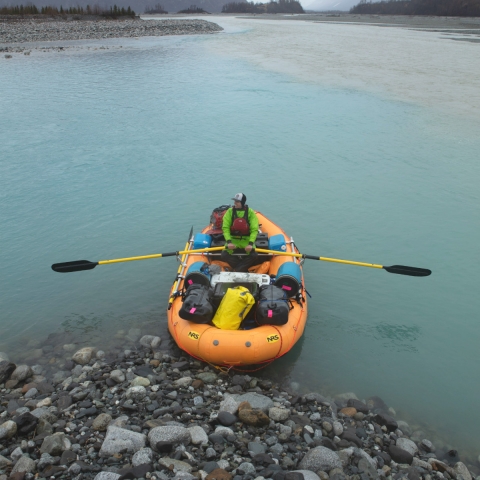 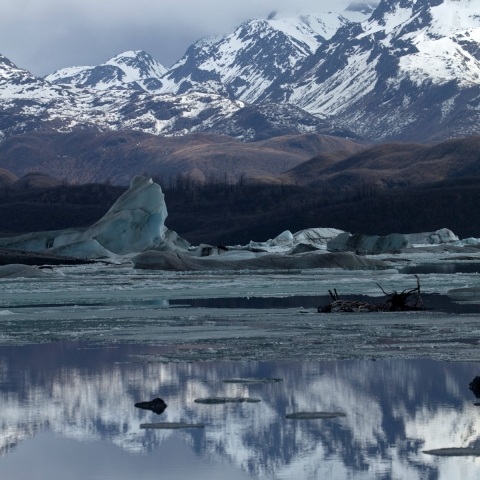 We spent our last few days camped on the banks of the Alsek, watching house-sized blocks migrate with the winds and celebrating a successful end to the trip. Our crew partied on the ice, complete with costumes, Jameson and all. A small plane flew over and I hope they witnessed the whole ridiculous scene.

Sunshine and brackish river water filled our exit day. Seals regularly popped up around us, making for one of the few sights to see now that our horizon had turned flat with the Pacific Ocean miles away. We lined our rafts up a side channel to the airstrip. Warm sun and birdcalls embraced us. The coast budded with life. Over the past twenty days, we had flowed with the transition of winter to spring. 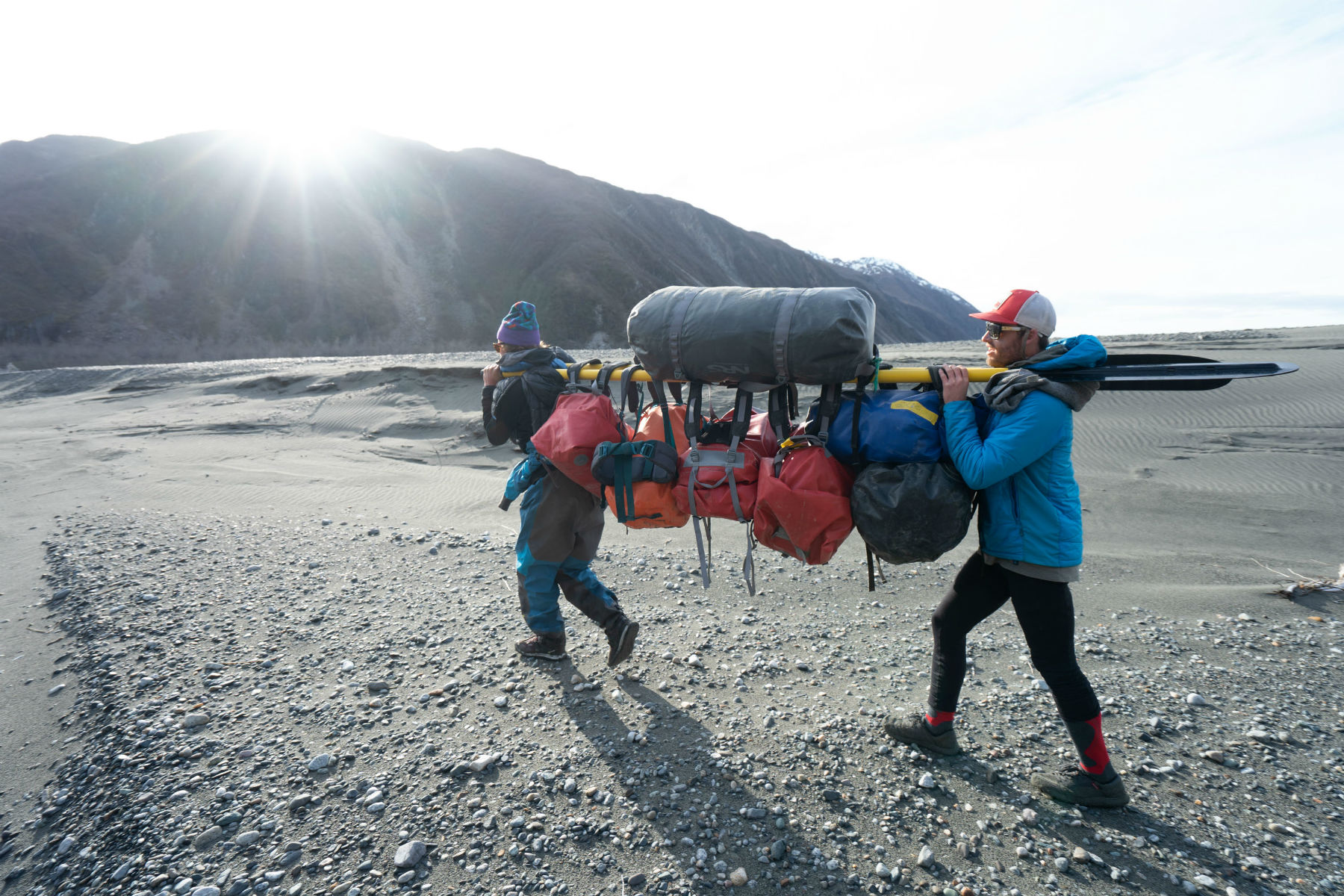 The distant humming of our airplane brought us back to the real world. Our pilot took us low up the river, over every camp, ski line and memory we had made along the way. The Tatshenshini flowed strongly now, soon to be filled with groups of river rats much like ourselves—and hopefully a few who would look up at the summits and think, “What if.”