“Thwack!” Sweat flies off my shoulders as I’m hit again with a set of birch branches, freshly picked by a Sámi woman who keeps telling me it’s “good for blood circulation.” I’m not sure if I believe her, but the smell of torn birch leaves fills the canvas sauna with a pleasant, greenhouse aroma. It’s a welcome reprieve from the stank of sweaty kayakers and rafters also gently whacking each other with birch branches around me.

My head eventually starts to swim from the heat, and I exit the sauna to plunge in the tourmaline blue waters of the Austervefsna River mere feet away. The Austervefsna is a pristine, big water run that originates near the Swedish border and flows west through 35 kilometers of gorged-in wilderness before its confluence with the Svenningelva River near the town of Trofors. Both the river and its confluence town can best be described by their remoteness. We’re about four hours north of the city of Trondheim, in a breathtaking yet rarely visited region called Grane in the center of Norway—the skinny part of the country.

I lift my body out of the water and stand warm in the evening chill, reminiscing about the day spent paddling and the space around me. In spite of the isolation, the area is a river runner’s paradise. Our hosts, Mariann Saether and her partner Ron Fischer, learned this early on, which is why they started the region’s first rafting company two years ago and have worked diligently with the locals to build a whitewater culture from scratch.

Mariann turned heads this year as the first Queen of the North Fork, winning the women’s title on the first year the race included an all-female division—it was her first time ever seeing Idaho and the North Fork of the Payette River. Born and raised in the mountains of Norway on the Sjoa River, she first transitioned from a high school baton twirler to a world-class kayaker at 18 years old. But she made a name for herself in the world of kayaking long before the NFC, running rivers that few have ever heard of. In the early 2000s, she boated the Austervefsna for the first time.

“[The region around Trofors] was a little bit of a secret. Norwegians didn’t really share it with foreigners,” said Mariann. The first time the region ever landed on the international whitewater map was after Rush Sturges, Ben Brown, and Steve Fisher released some footage of the Glomåga River in 2010. Despite the brief publicity though, the location still flies way under the radar relative to its potential.

Mariann and Ron had been spending their summers basing kayaking adventures out of Trofors for a few years when the idea of a rafting company first sprouted. Ron, who is a world-famous Swiss kayaker, laughs when he says he never thought he’d be a raft guide until the idea to start a rafting company entered his head. The couple went to the Trofors township for support, which they received in spades. The town wanted to tell the world about the region’s treasures, and a rafting company was the catalyst to do so. Mariann ran into the mayor of the town, Ellen Schjølberg, while eating ice cream at a local gas station following a kayak run on the lower stretch of the Austervefsna one day, and the two began a conversation about how to put Trofors on the map.

“We have a lot of rivers nearby, and a lot of water,” said Ellen. “It was a gift to get Mariann and Ron to start up a tourism company, and I think they inspire a lot of people.” 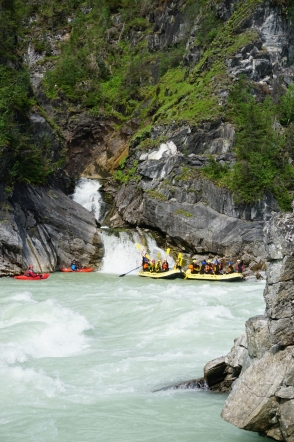 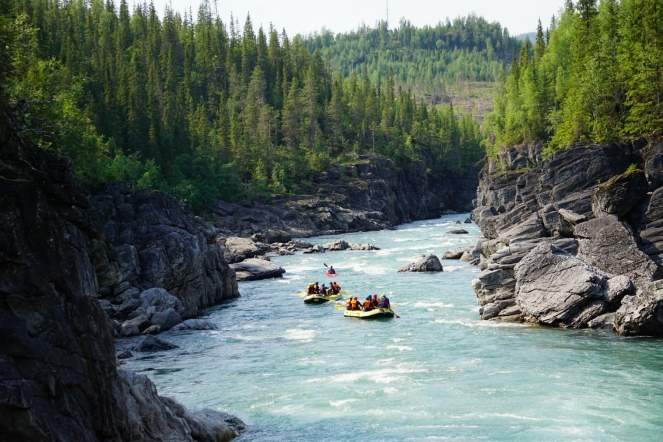 Over the years, the two collaborated on some kayaking courses, local presentations, and even a local river festival. Ellen eventually pointed Mariann and Ron in the direction of a grant proposal to get their rafting business up and running. The grant was awarded and RiverNorth was born.

“Not only did they grant the application, but they gave us more money than we applied for,” said Mariann. “We realized ‘Oh my god we have to go buy some rafts.’”

When they opened RiverNorth, Mariann was pregnant with her and Ron’s son, Benjamin. Today, Benjamin is shaping up to be a lover of rivers himself. He loves duckying with his dad or floating in his own personal tiny Corran Addison kayak, but he’s the happiest swimming in whitewater.

“We have a little NRS wetsuit and PFD for him, and he actually likes whitewater swimming,” says Ron. “Although he doesn’t really swim the lifejacket, of course, is carrying him…we would go out into the current more and more and swim little class I waves, and that was my highlight of the summer with him.” 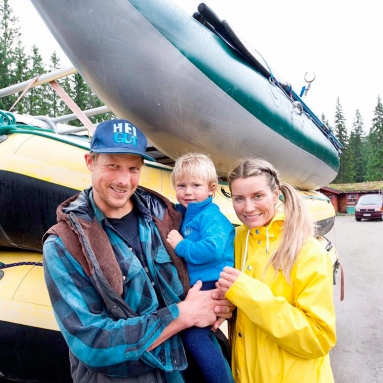 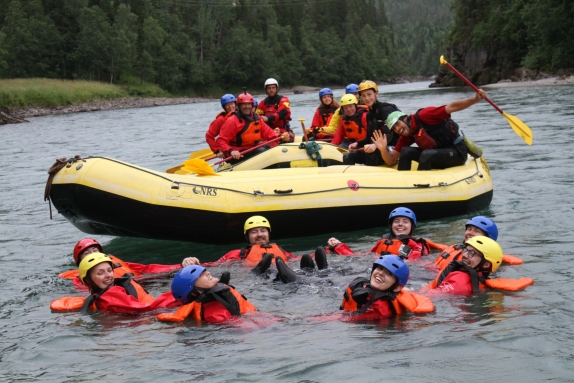 Benjamin’s initiation into the world of whitewater has some parallels with the region as a whole, which Mariann and Ron have slowly introduced to rafting and kayaking. Mariann said it began when Ellen would convince her to come up to the town to give speeches about the sport or offer kayak courses. Now that she and Ron own RiverNorth, those kayak courses also include the only guide school north of Trondheim, and many of the students are local kids from Trofors.

“Lots of local people have tried to raft and they become proud and aware of the beautiful nature of our river,” said Ellen. 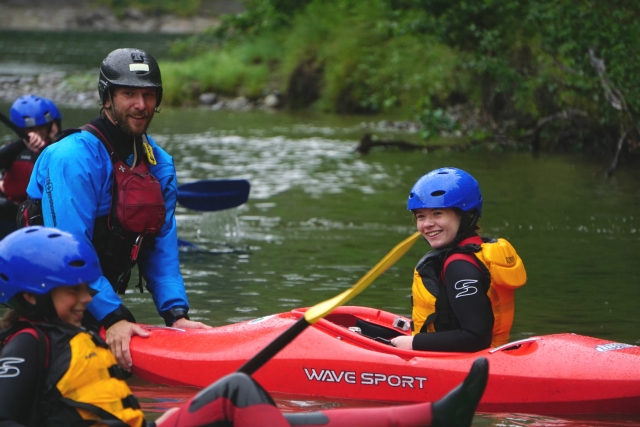 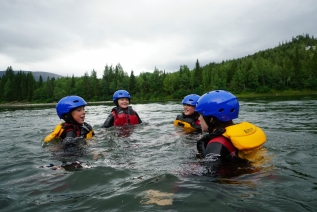 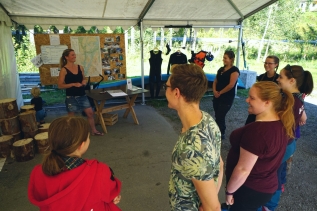 Hours before I dove into the Austervefsna covered in sweat and birch oils, I had tagged along on one of Mariann and Ron’s commercial trips. In one boat, Idaho-based guide Zak Sears was doing his best to dump a Norwegian bachelor party into the water. The other raft was a training boat captained by Mariann, with two kids in their mid-teens learning the ropes. The older brother of one of the kids had attended the guide school the previous year and gone on to become one of their guides. While the younger teens were still too young to take customers down the river, they were both taking the guide school early in preparation.

The schools that Mariann and Ron offer do more than just introduce the locals to the fun of river sports. They also offer a potential long-term solution to running a healthy business in such a remote environment. Ron said one of the most difficult parts of running RiverNorth is finding full-time guides. Trips don’t run every day, so keeping a full-time guide staff can have its challenges.

For this reason, RiverNorth also has an unofficial company policy of only hiring raft guides that also kayak. It’s not a pretentious policy in any way, they just want their employees to always have something to do on down days. From a kayaker’s lens, it’s quickly apparent that the Austervefsna is not the only game in town; the region overflows with incredible runs at every difficulty level. 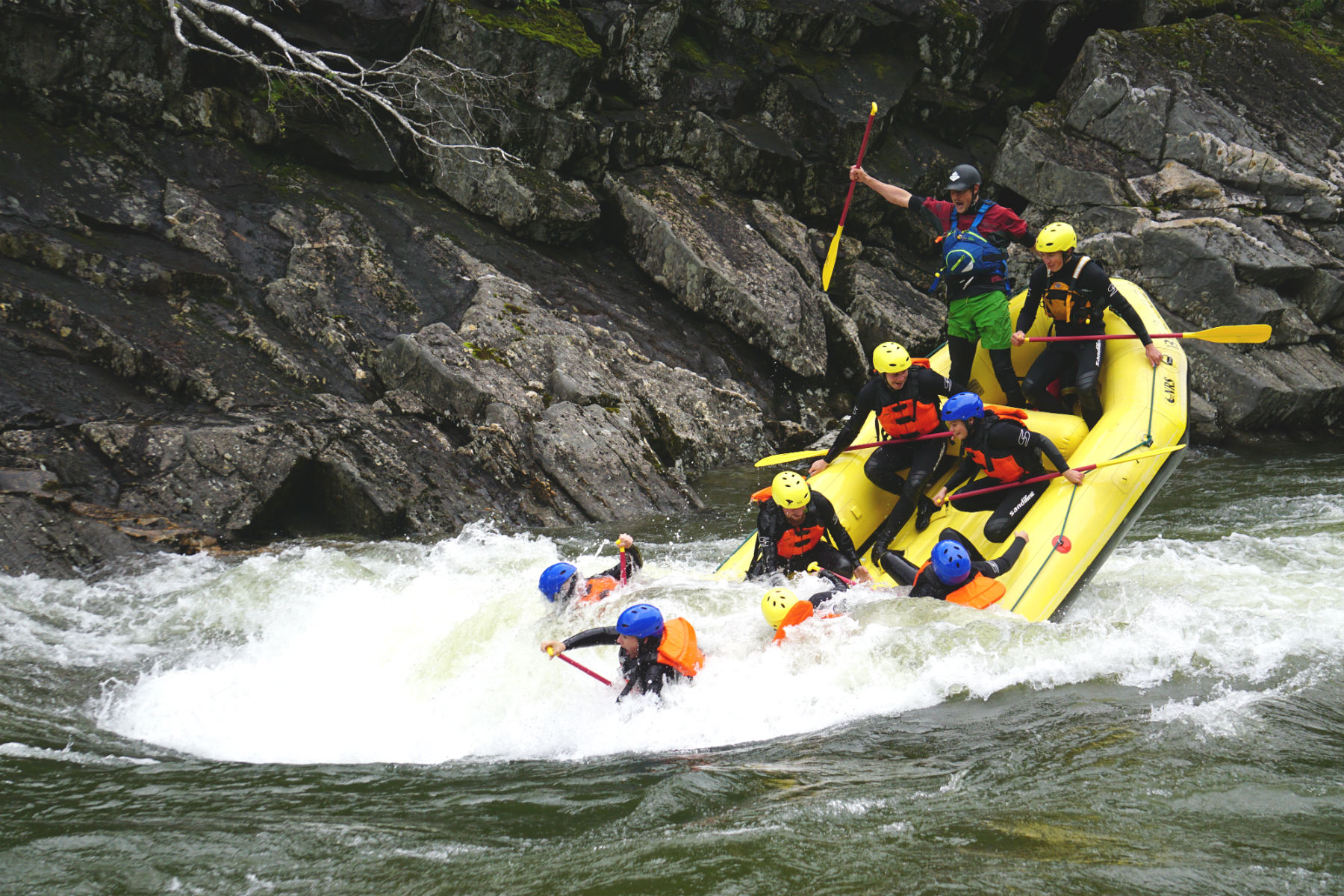 The time that the couple has put into bolstering the whitewater community of Trofors has had a recognizable effect. According to Ron, the town now has a rafting club of about 20 to 30 members—a healthy amount for an 835-person town with a single restaurant: a kebab and pizza bar named Trixies. While driving through the small neighborhood I also see the familiar sights of kayaks resting in backyards and stacked against sheds.

“It’s definitely a river community,” said Ron. “You meet and have barbeques with local people who are river people or who are getting into it, and that hasn’t happened before we got here so it’s really cool.” 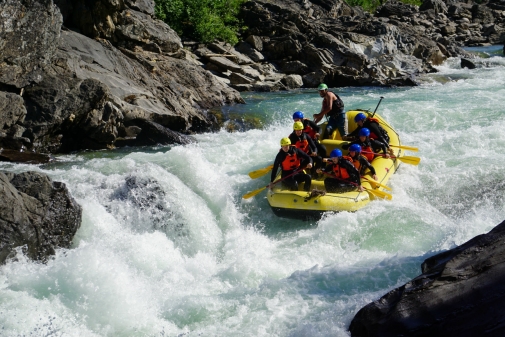 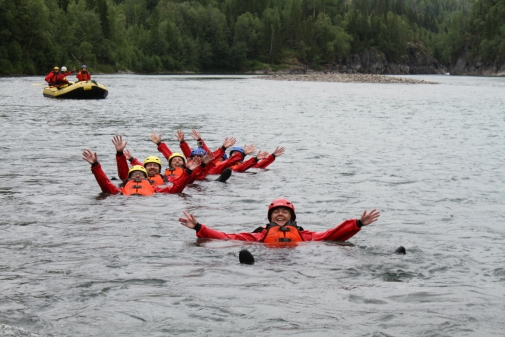 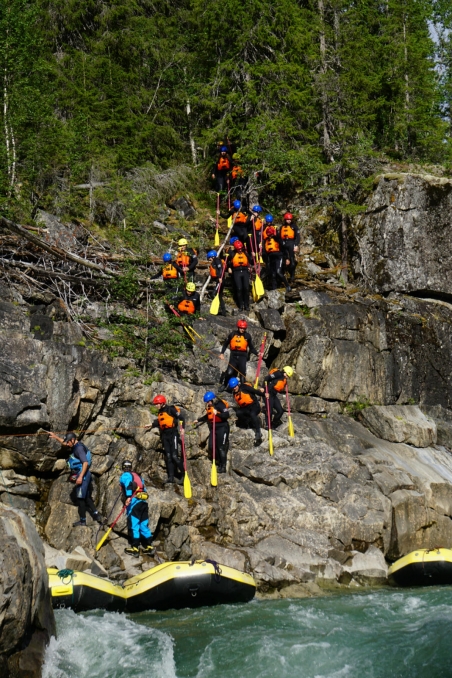 As they cultivate the regional whitewater community, Mariann and Ron are bracing for what could be an economic windfall for the region: the return of the salmon. A parasite called Gyrodactylus salaris infected the river in the 1970s, decimating the population. Then, in an effort to finally exterminate the parasite, officials poisoned the river and all of its fish in 2011. Now, experts are using fish ladders to reintroduce the salmon and it’s estimated that about 50 tons of salmon will be harvested from the river each year.

“We’ve noticed more and more fishermen coming to Trofors and we’re still in the very early stages,” Ron said. “If this river goes back to the 50 ton [harvest] which they think and hope, then there will be a huge increase in fishing tourism here, and we are the ones with access to these whitewater stretches where there is great fishing.”

For Ron and Mariann, running guided fishing trips on the Austervefsna is a dream, but one that will require some tact. Salmon fishing has a storied tradition in the region, and local landowners and fishermen can be protective of their resources. 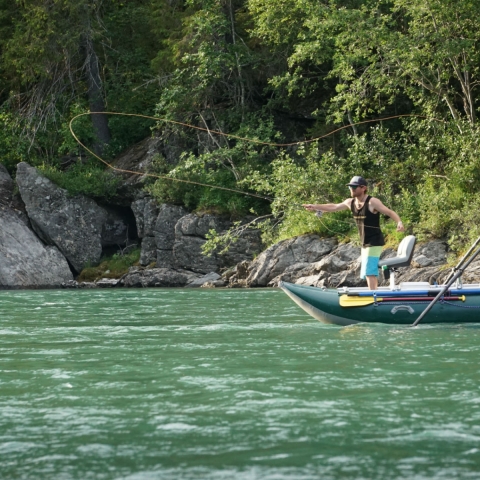 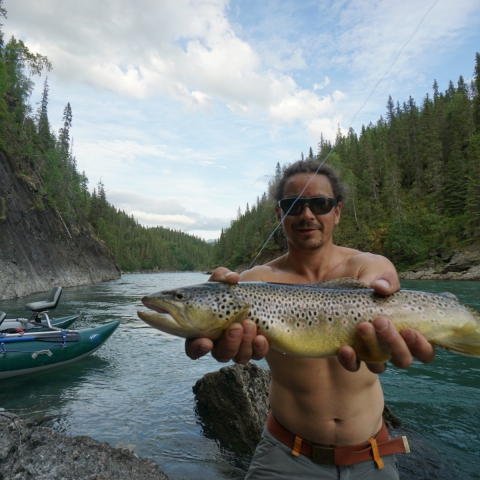 “We have to cooperate to make sure we are still welcome and that the local community will accept our business,” Mariann said. “We need to be clever about it.”

One idea that has gained vocal support from the locals actually originated in the U.S. from Zak’s years guiding in Idaho. This spring Zak and Ron gave a speech at the regional Vefsna Conference, a gathering intended to focus on regional development, about the possibility of introducing drift boats to the river. As of now, drift boats are virtually nonexistent in the country. The locals really enjoyed the video featuring drift boats from Helfrich Outfitters, a stateside outfitter that runs drift boat fishing trips on the Rogue and Middle Fork of the Salmon rivers, said Ron. This is mainly because the wooden design reminds them of the wooden, keeled “Vefsna boats” that Norwegian fishermen have used for fishing the lower stretches of river for generations.

“Now that the salmon have been allowed to return to the middle and upper sections of the river, drift boats are a great option for navigating the rapids as well as blending with local traditions of using wooden boats,” says Zak, who has offered to help Ron and Mariann build a drift boat on-site in Norway. “Not to mention they’re just beautiful.” 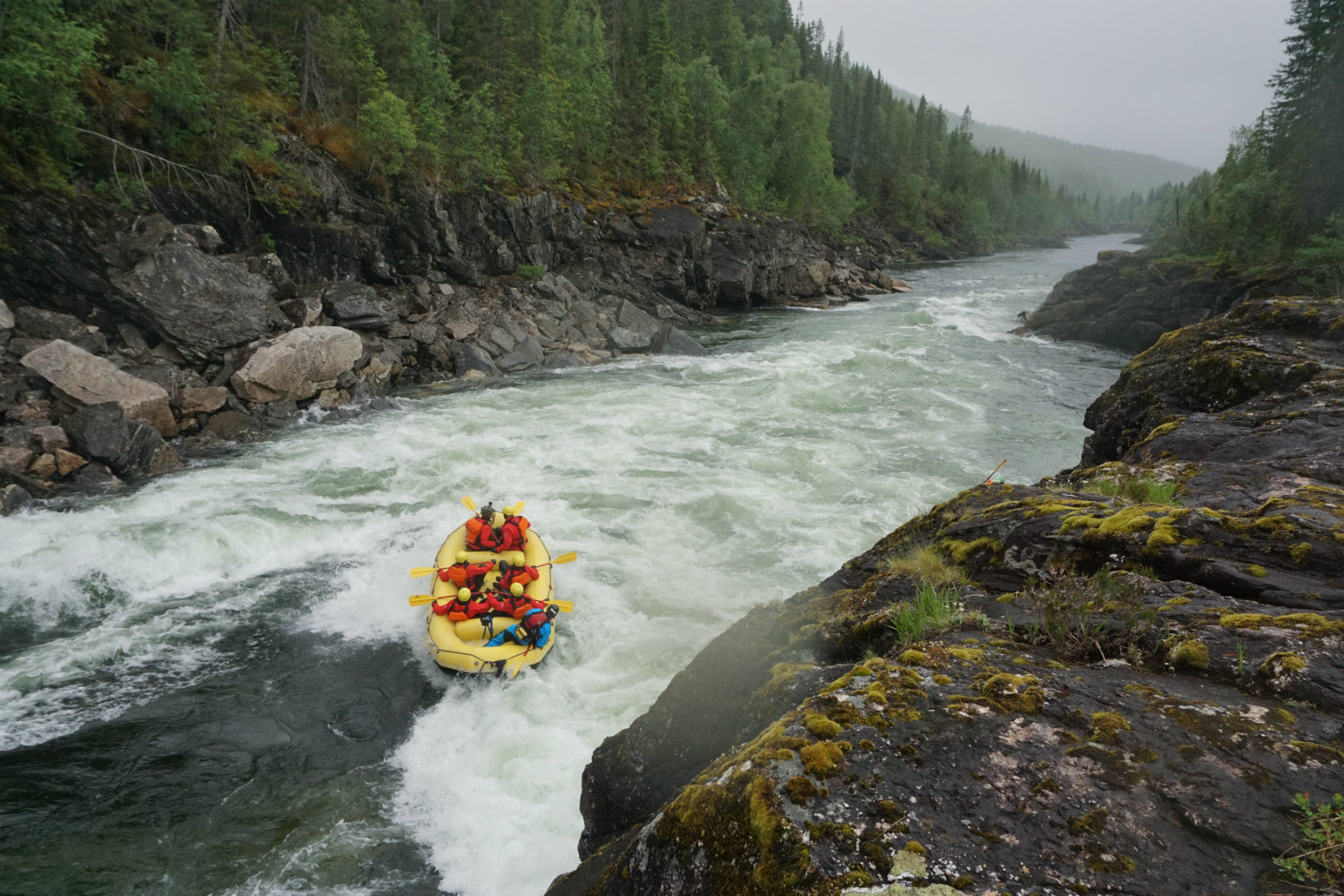 Looking out at the Austervefsna I can easily picture a string of drift boats floating high in its waters in my mind’s eye—a seamless amalgam of the Vefsna tradition and the new age of boating in the region. Outside the sauna, a barbeque is up and running, the whiskey bottle is out, and Zak is learning how to use a reindeer lasso from a Sámi friend who tells me his family has herded the region for 10,000 years.

Even the ground we’re standing on tells a story of the new meeting the old. RiverNorth’s base of operations stands amid the old Grane Bygdetun, or museum. Outdoor exhibits show how natives milled wood for Vefsna boats for hundreds of years surrounding the forest around the sauna. 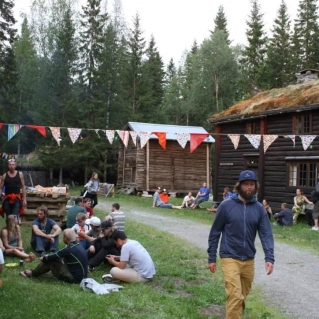 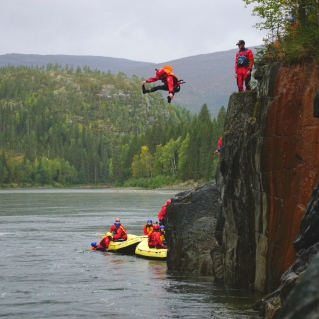 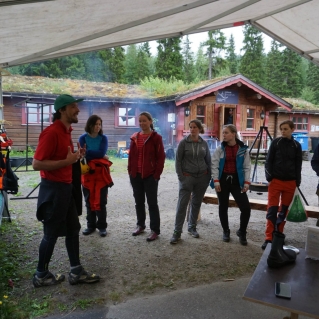 The Norwegian people hang tightly to tradition, but culture is fluid. In the remote river corridor of the Austervefnsa and the town of Trofors I don’t see a changing culture, but an evolving one. Ellen tells me that boating has been here a long time but the introduction of Mariann and Ron into the community has revitalized it and led to a new development in the story of Trofors and its people: whitewater.

Editor’s Note: Guest Contributor Sage Sauerbrey is a freelance writer based out of Bozeman. Montana. He’s happiest messing about in boats—in them, out of them, it doesn’t really matter. He hopes that telling the story of beautiful places will eventually lead to their preservation.

All photos courtesy of RiverNorth unless otherwise noted.