“Well, at least I remembered the oars this year.” I grinned, gesturing to the boat and trailer which were parked in the middle-of-nowhere BLM land behind the silver anachronism of my front-wheel-drive Dodge minivan. Around us, scrubby eastern Utah reached out to the Book Cliffs in the north, the La Sals in the south, and was sliced by deep, invisible canyons somewhere in between.

We watched sunset rains wash across the world, obscuring nearby I-70 and growing into flickering thundercells as they climbed the Western Slope of Colorado. The bluff was remarkably peaceful and still, and, knowing the intensity of the next day’s activities, all five of us appreciated the calm.

Tomorrow we would launch on the second-annual, ladies-only Westwater trip, fondly known as the WestwaTaTas. 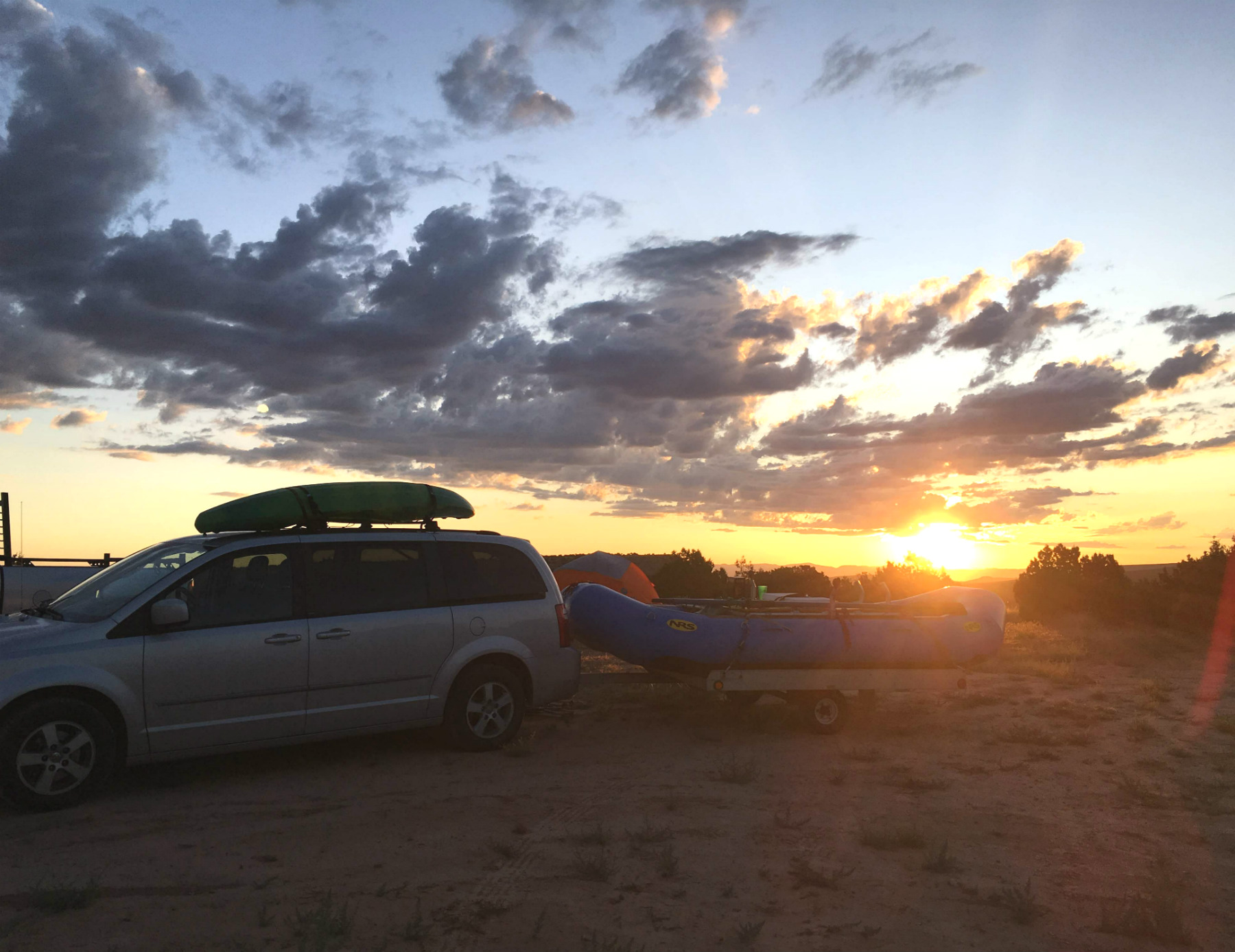 Leia and Kristen, my idol and little sister respectively, laughed. Last year’s WestwaTaTa’s trip had involved a nightmarish moment when the ranger asked me, at the put-in, if I had three oars for each boat, and I realized that no, I did not. (Spoiler: we recovered logistically and then I managed to maybe flip a boat in low-water carnage-creator Skull Rapid the next day.)

But this year already felt different in so many ways. Last summer, had been brutally hot and dry, the rivers gasping for water and the mountains on fire. This year, the river still clung to high water at the end of July, and rain pelted the desert. Last year, Westwater had been running at 2,100 cubic feet per second, and this year it was just below 12,000.

As a mom, rafter, and writer, I was also in a very different place a year after that inaugural float. I’d been getting almost enough sleep for once. Perhaps not enough to erase the deficit of the last six years completely (much like one wet season won’t erase the drought in the west), but enough to refill the reservoir of my own frontal lobe. Hence the presence of all essential trip gear. My arms were in better shape (mostly from doing pull-ups on the swingset), and my passion-career had taken off with many unexpected opportunities. 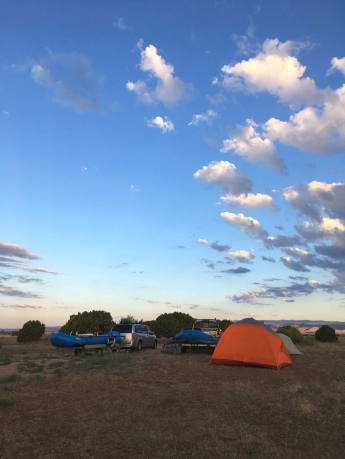 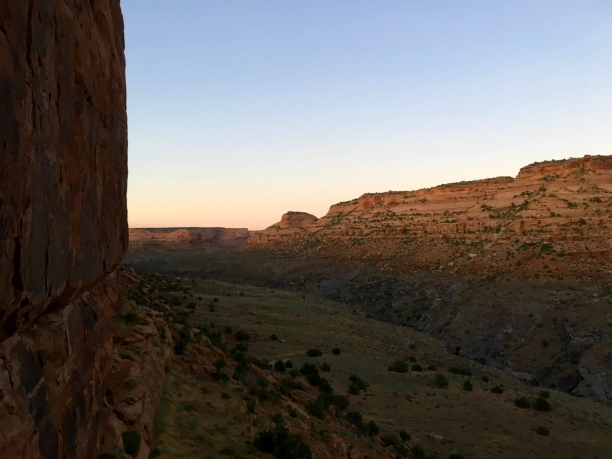 I realized with shock that I was even about to finish my beverage for the evening without having to jump up once in response to screams or demands for a snack. I couldn’t wait to sleep in my tiny backpacking tent and then wake up and meet some more awesome ladies at the put-in.

The roster for the trip, uncertain until the last minute, due to concerns about high water and, y’know, life, sort of sounded like a bad joke:

What do a bus driver, a bartender, a PhD candidate, five teachers and a freelance writer all have in common?

Ovaries of steel, my friends. 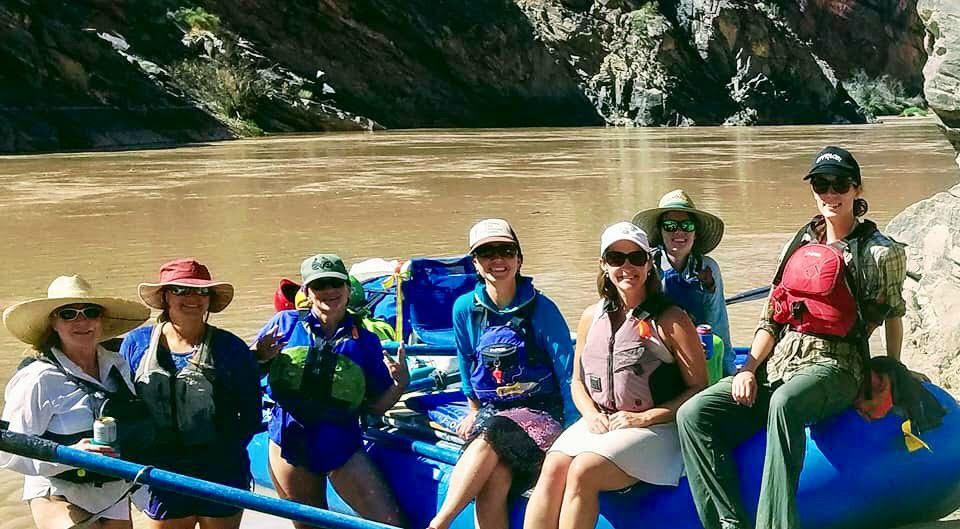 At this level, for those of us who don’t have the opportunity to row the canyon every weekend, Westwater is pretty damn intimidating. All summer, we had been watching the USGS gauge like a baby-giraffe cam, updating it every few hours to see if anything had changed. When it was still 20,000 cfs on July 10th, we almost canceled. None of us had any interest in rowing it in the infamous teens.

We just didn’t have anything to prove to anyone and would rather have fun on the water than fear for our lives.

The three captains on the oars were all moms, and we rowed with arms that had carried a total of six small children between us. We also boasted 21 combined years of whitewater guiding. These women are my tribe on the water, as we all attempt to balance households, careers, and a love of the rivers. 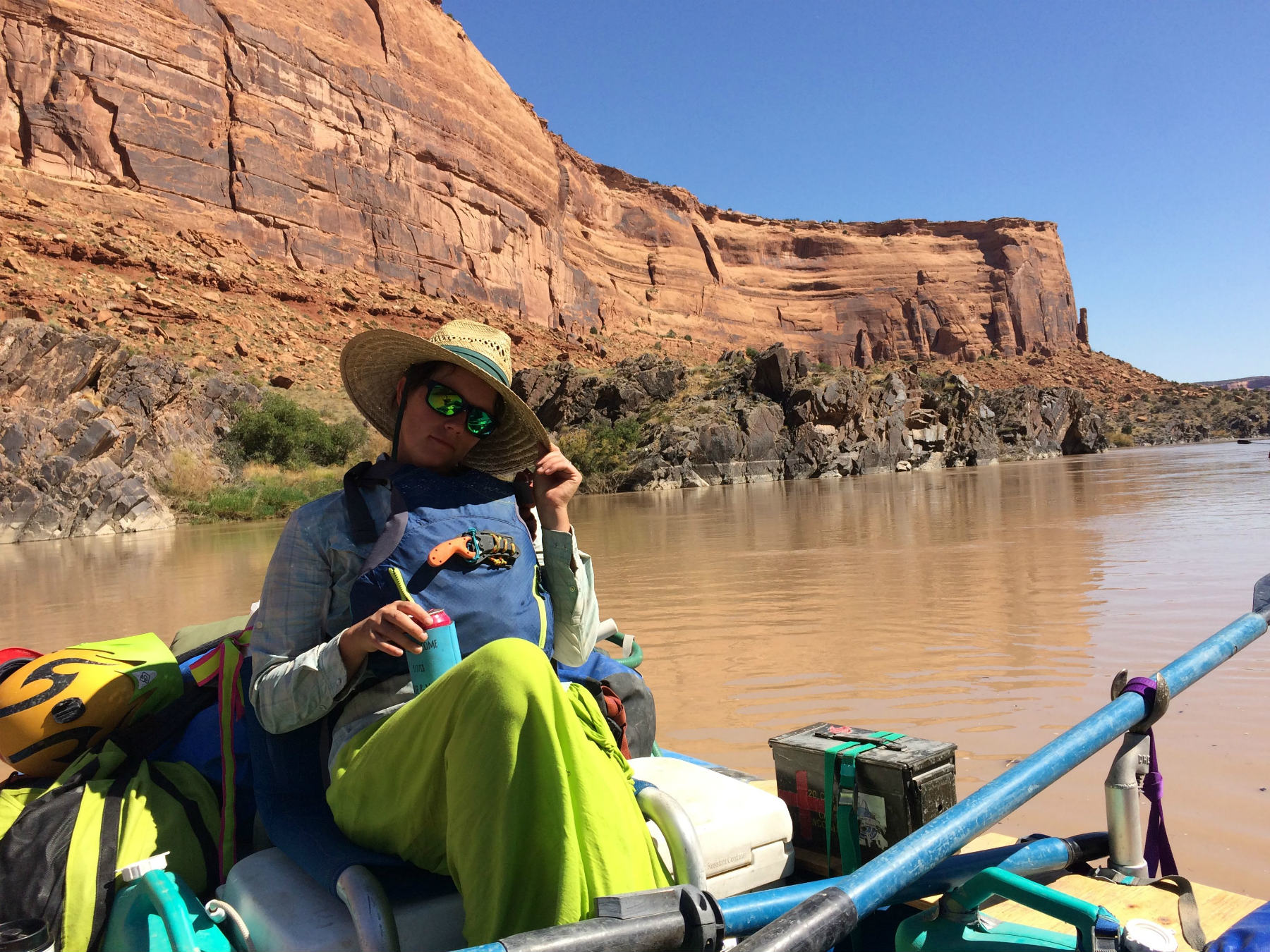 Trip leading with all women is a wonderful experience because everyone is just so damn honest about their expectations, limitations and worries. Jessica admitted that she might not have the muscle bulk for rowing at this level, and, coming from a largely paddle-guiding background, asked for two strong support paddlers on her boat. She adjusted her oar towers for about an hour at the put-in, rigging in silence, but never complaining. She would end up kicking ass throughout the whole canyon.

Leia was squeezing this trip and a float down Hell’s Canyon into the last week before she went back to school. As a special education teacher, she and her teacher husband worked in the summer to pay for childcare for their daughter Grace. Meaning, like most teachers, there was no ‘summer break,’ and she mentioned that she was really dying for some time with friends on the river.

Neither did anyone mind when the only kayaker, Lisa, also decided to change plans and take her first rubber-based float down the canyon, leaving her green machine with the shuttle vehicles. 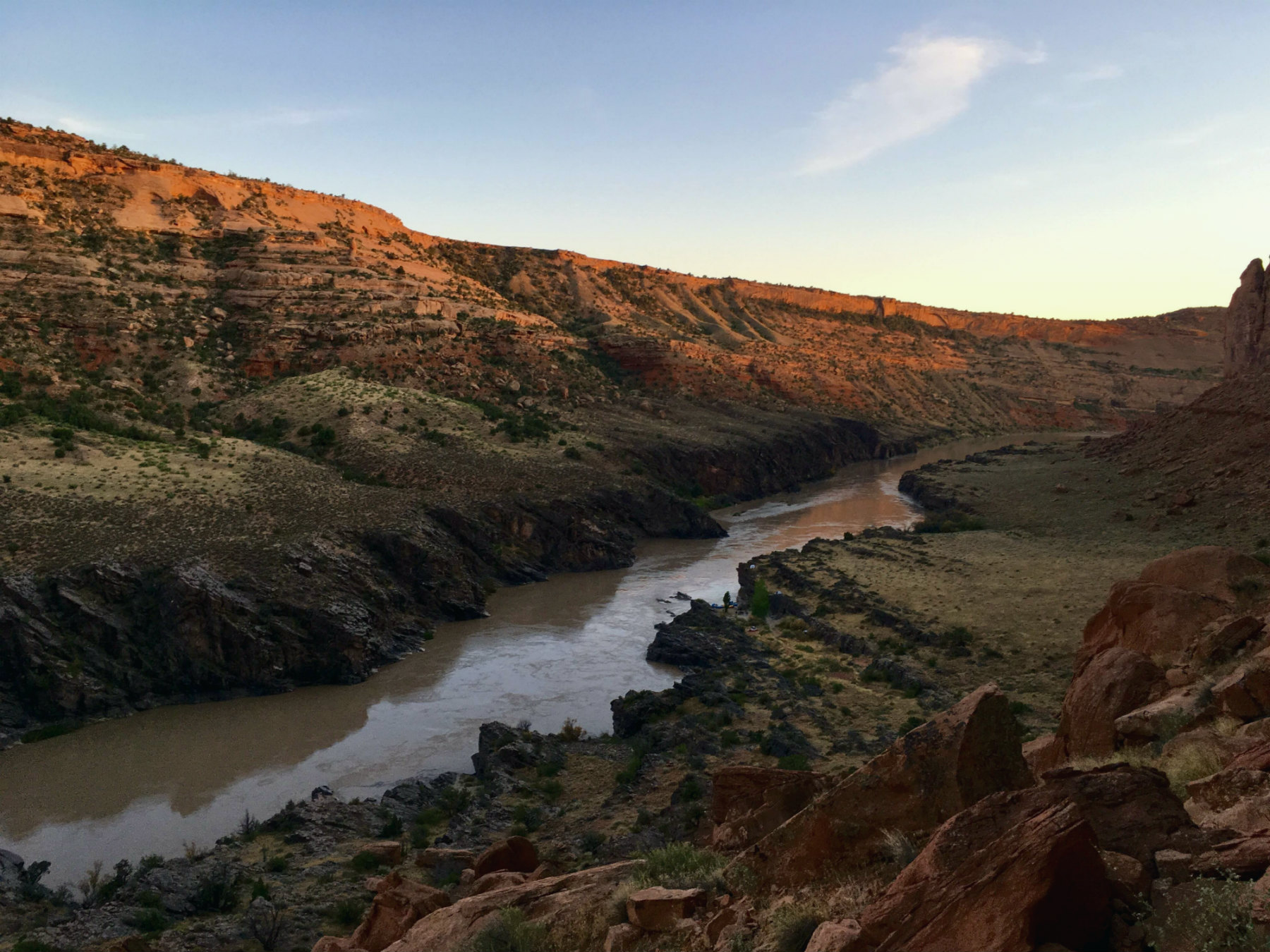 Having decided to camp after the rapids, we had a long way to go when we launched. Yet due to the velocity of the flow, we easily covered the 7.5 miles in under an hour, pulling over just above Little Dolores rapid for the safety speech and to helmet up. Rules 1, 2, and 3, were ‘Stay in the Boat.’

Westwater Canyon has hosted me in every season of my outdoor life: greenhorn counselor running a paddle boat of high schoolers with verbal beta and ‘just follow my line.’ Slightly more grown-up me guiding with friends and making out in the tamarisks with my someday-husband. Side-hiking. Cliff jumping. Hotly contested card games of various types. While I had changed a great deal in the last decade, the dense, black rock of pre-Cambrian schist had, unsurprisingly, not.

As I reminisced, I realize I needed to quit reminiscing and pull harder. The current was pushy and the eddy lines behaved like the underpaid high school students in a haunted house: jumping out of nowhere to scare the shit out of you and make you wonder why you actually paid any money to be here. 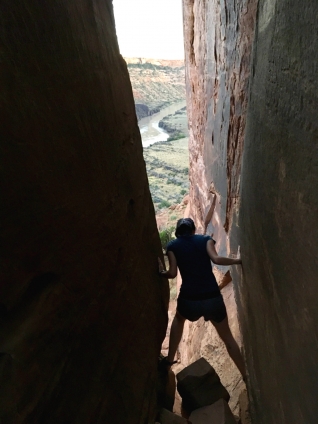 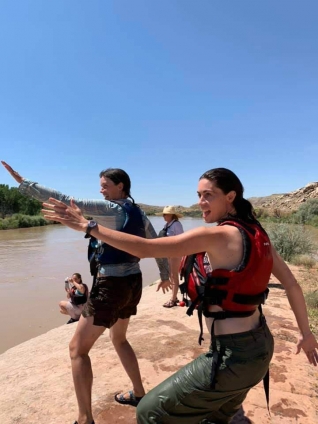 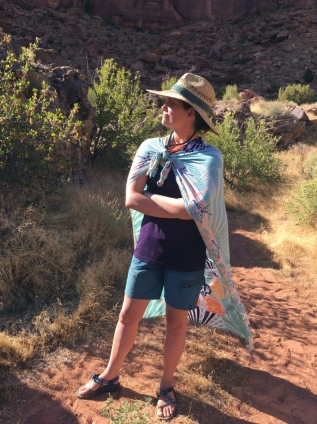 Marble and Staircase blew by in a confusion of scattered holes and surprise lateral waves. Hummer was a massive Don’t-Go-There hole, and Funnel almost tipped us. With the upper guard rocks on the left washed over, the traditional funnel drop (where a full-size 16-footer can completely disappear to those just a little upstream) was gone, replaced with a towering rooster tail which stood us up on end in our 15-footer. In fact, if one of my river savvy passengers, Stephanie, hadn’t shifted her weight into the wave, I might be telling a very different story today.

At this level, Skull Rapid’s left side lateral is a beast that takes over more than half the river. The move is always simple, from right to left, but it also falls into the ‘Must Make’ category. Ending up in the Room of Doom at this level as a swimmer could be deadly, and with a raft would likely mean a z-drag or hike-out. So, just punch through that lateral, ladies.

The prominent, triangle-shaped rock on the river-right cliff has always been my marker for this move. But, I hesitated just a split second too long and instead of gracefully crashing through the lateral at a perfect 45 degrees, I rode down it, coming entirely too close to the ‘Rock of Shock.’ 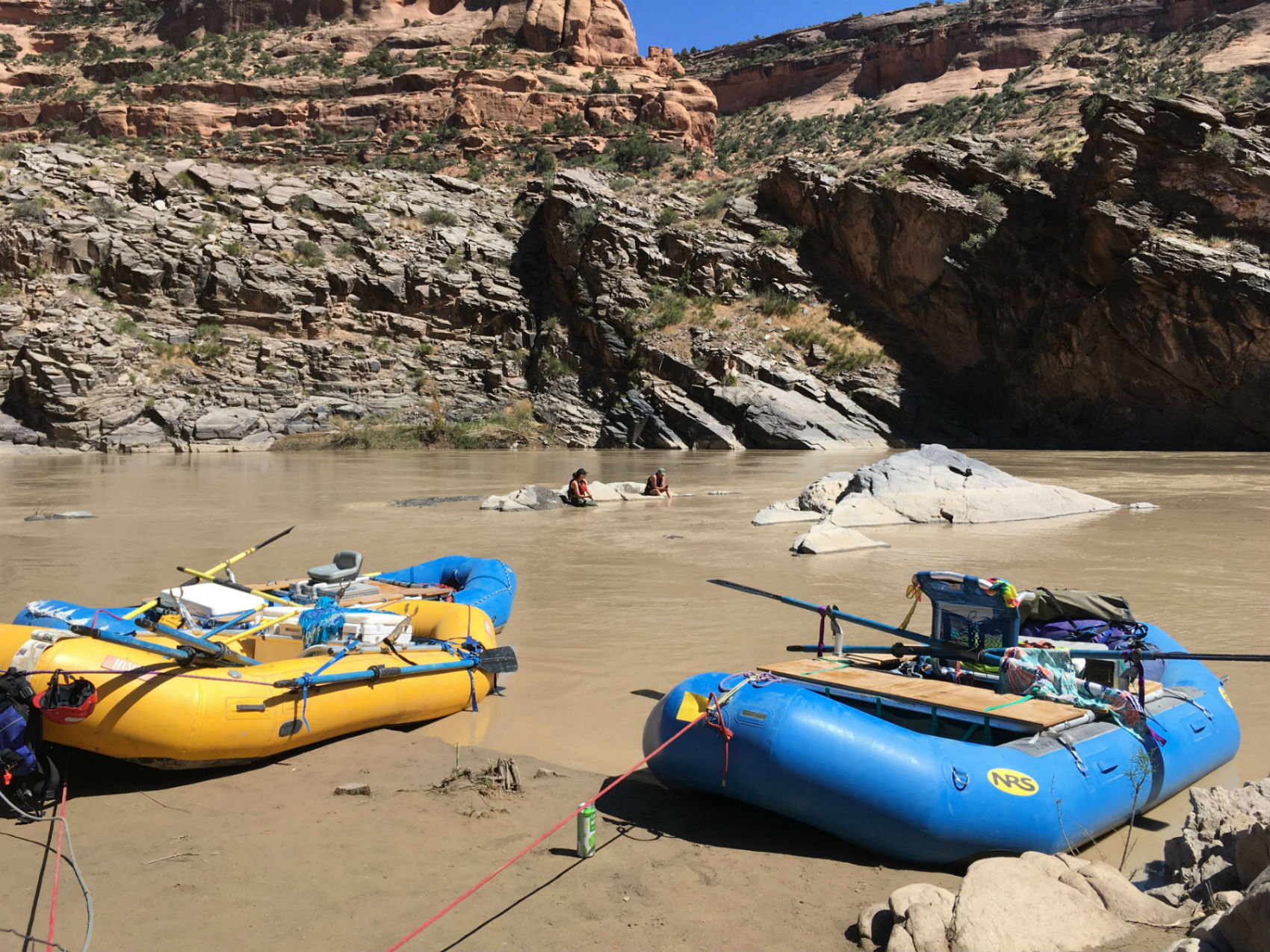 After reaching the safety of the post-Skull eddy, where the rest of my trip and some commercial boats were hanging out, my sister shouted, ‘Yeah, we did it!’

To which my adrenaline-drenched brain bellowed, ‘Shut your dirty f’ing mouth, we’re not finished yet.’ As I looked around at the mixed company of the eddy, I opted to say nothing as the trip leader for the commercial group commented pleasantly, ‘We’ll just let this private trip get a little farther ahead of us.’

Off we went. At Sock-it-to me, Leia nailed a beautiful line, down the center, yet avoiding the irregular crest of the catcher’s mitt central feature, and I followed her as best I could.

My mouth was dry, my arms were jelly, and we ran the last few smaller rapids in a mood of celebration. After Last Chance, I cracked a Lime-a-rita unapologetically and gave Stephanie the oars. 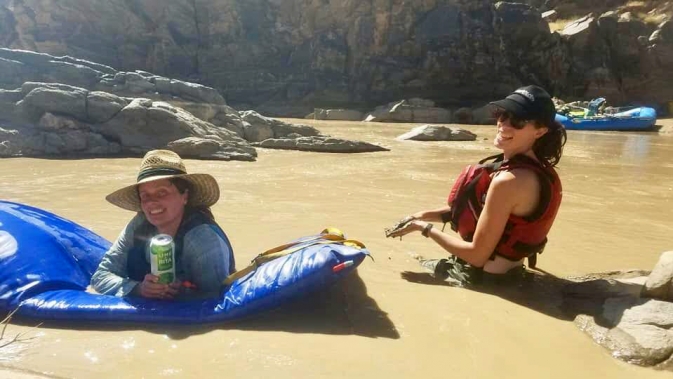 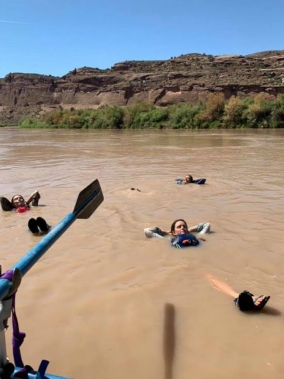 Over the course of the afternoon, we sipped cocktails, told stories, laughed, floated, cooked and enjoyed the casual company of all the badass ladies.

We side-hiked to see an ‘historical’ naked lady etching. Watching the sunset from the other side of the canyon, below the rapids, was a wonderful experience, and one more reminder that a change in perspective is a beautiful, inspirational thing.

In the twilight and summer-dark hours after our hike, conversations drifted around the firepan.

My little sister observed, wryly, that boaters may, in fact, talk about boating a little too much. 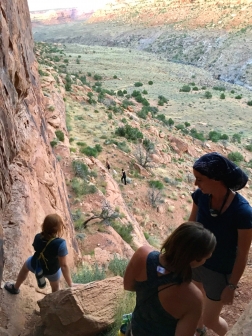 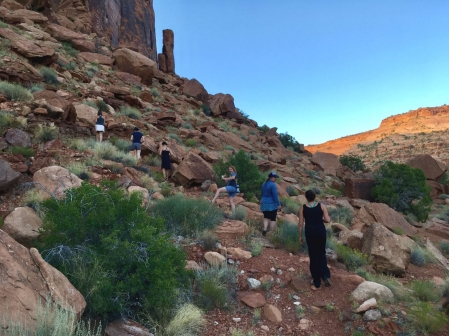 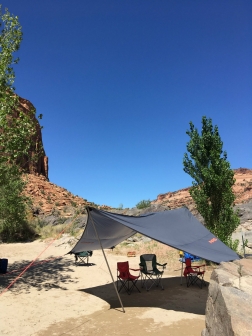 A few women who had never seen female captains rowing were interested that it was, in fact, okay to pull backwards through the bigger hits if you don’t have the muscle to do it like a one-armed push-up. Strong boating skills are not all about physical strength, and the ability to read the current correctly at a minute level is far more important. 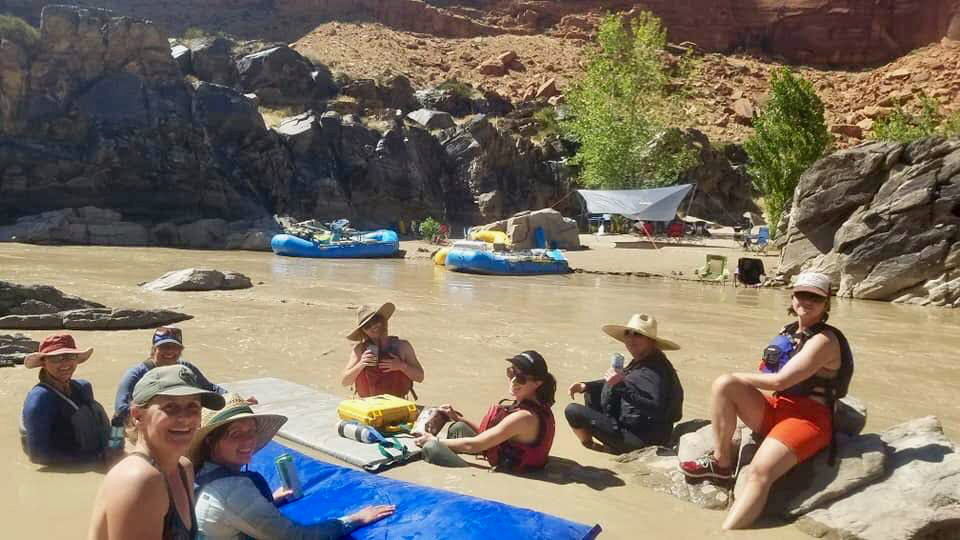 The evening passed in a pleasant haze of wine, shooting stars and not having to impress anyone. Some skinny dipped, some went to bed, some fell asleep sitting up with beer in hand (and didn’t spill a drop!). I got to sleep the whole night without anyone waking up and screaming in my ear.

The next morning, the few miles to the takeout involved lazy floating in the silty water, embracing the desolate atmosphere and cliff jumping.

After any trip, there’s always a reluctance to return to the real world. A resentful feeling that rises up when you see that first glint of sun on the windshield of your waiting, superheated shuttle vehicles. There’s a deep urge to hit the pause button, stop time, and repeatedly throw yourself off a cliff into the water, then climb out and do it again. 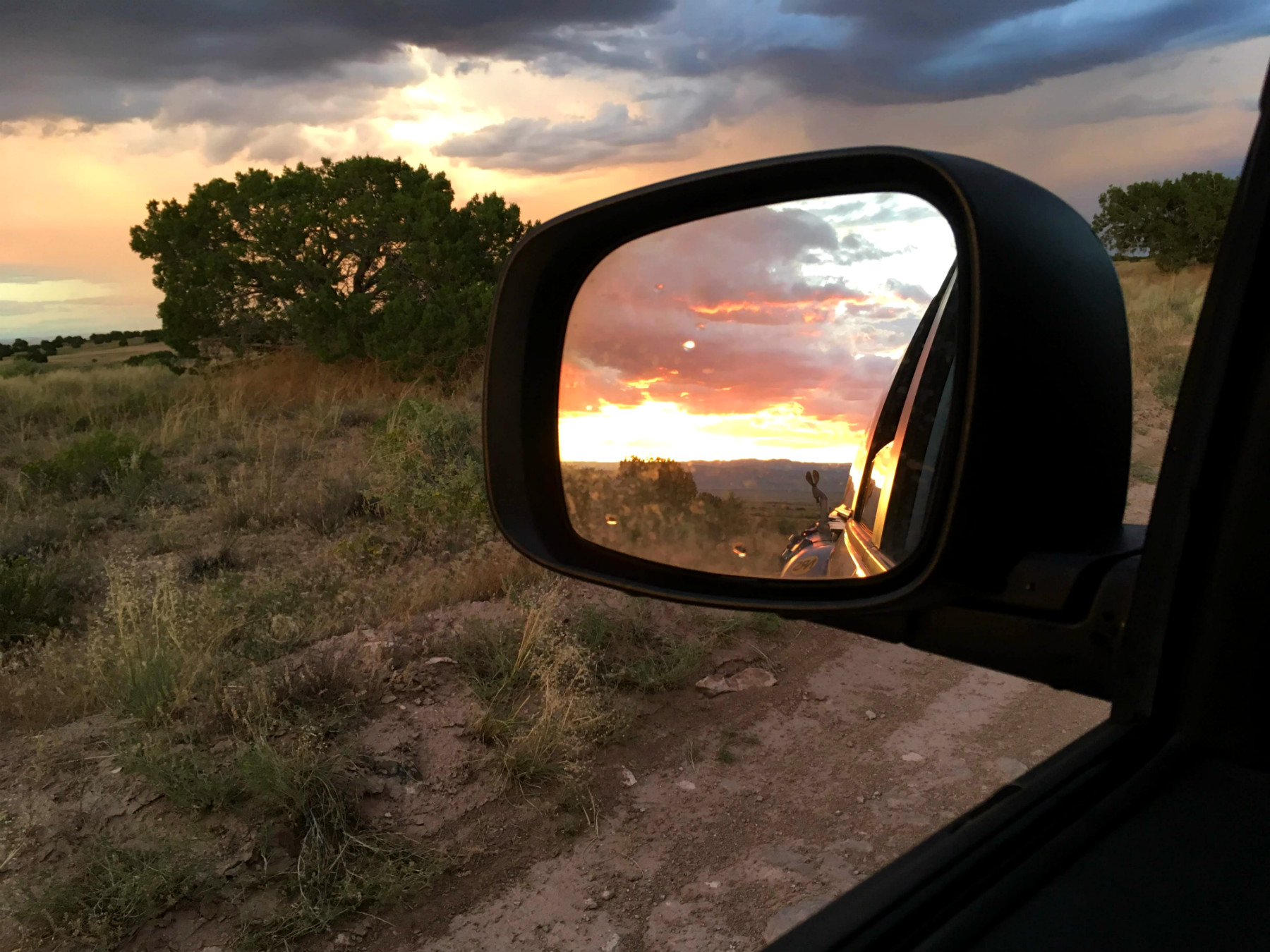 But the current moves on and for me, as a mother, it seems to be picking up speed. I look around at the beautiful scenery of my life right now: my home, my healthy-hilarious-infuriating children and the long-suffering love of my life beside me. I know that this lovely stretch of young childhood will be a wild ride that is over too quickly. Yet sometimes, I still search for that break, need that eddy out moment where I can leave the roar of life and float while listening to my own thoughts, challenge myself in totally different ways, get a little lit at camp, then dive back into the current, ready for the next adventure.