Boulders and mud blocked the road, forcing a traffic jam that delayed Anup Gurung and his friends on their way to a multiday kayaking trip on the Kali Gandaki River. Born and raised in Nepal, the power of nature had always been tangible, visible, and present to Anup. He had been dreaming of a cross-country paddling expedition for years, inspiration building each time he paddled the rivers of his home country. As Anup watched the excavators clear the landslide, the gravel, mud, and debris pouring into the river brought the devastation of Nepal’s rivers into focus. At that moment, he made a commitment to himself to make the trip a reality.

Preparation and logistics for a five-month river journey through Nepal would require significant time and energy. But this first step, committing to fulfilling a dream to experience authentic Nepal rivers, raise awareness about their destruction and share stories of locals affected, was the easy part. “In past years, even in the most remote places, I’ve barely found a clean riverbank, unblemished by human abuse,” he says. “I’ve seen world-class rivers dammed one after another. I’ve seen the desertion of villages. Now I want to see what is left and see what can still be saved. This is Mission East to West.”

Long before class V multi-days, Anup had an unusual entrance into the world of whitewater. Near his house on the outskirts of Kathmandu, a four-year-old Anup fell while playing along the riverbank and the fast-moving current of a monsoon-swollen river swept him away. Five kilometers downstream, a group of farmers plucked him out, believing his small body was a corpse from the graveyard upstream, unearthed by the heavy rain. When his mother found him minutes later, she ran him to the nearby hospital. To this day, villagers ironically know him as “The Boy Who Almost Drowned,” rather than “One of Nepal’s Most Skilled Whitewater Kayakers.”

Somehow, this first river experience fed Anup’s love of water, but also fueled his parent’s fear. “After that incident, my parents avoided anything water-related,” he says. “I was the only student not allowed to take swimming lessons in school!” But Anup was hooked on rivers and at 16, signed up for one of the first kayak courses offered in Nepal. The course, which was designed for adults, took place during the final days of high school exams. Anup made a pivotal decision to skip high school exams and join the kayak course and ultimately start a life deeply connected to rivers. 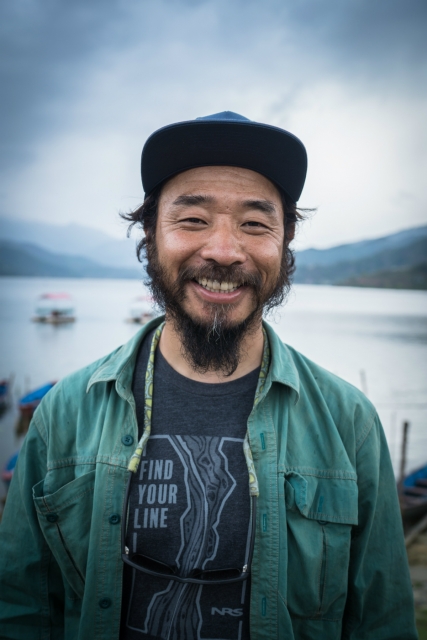 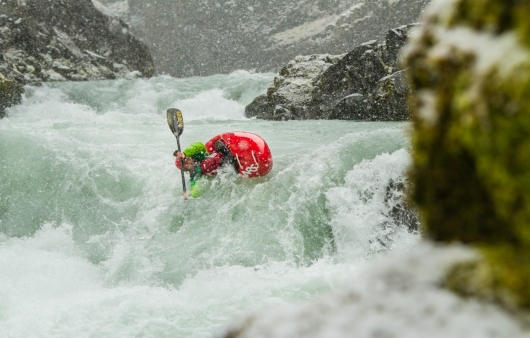 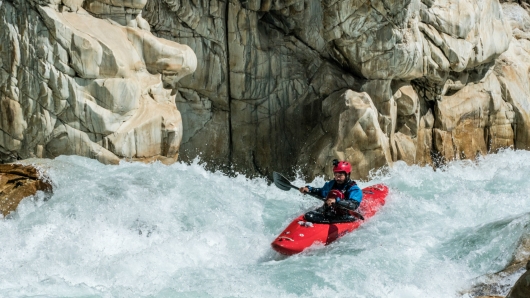 It was a resolute decision—much like the one to paddle across Nepal—and both would deliver life lessons, countless adventures and many obstacles. Anup finished the course at the top of the class and the local rafting company on the Bhote Koshi River promised him a job. When the company didn’t follow through with the hire, he made friends with a local river guide who taught him the basics. And then he kayaked every chance he got, sometimes waiting at the put-in for hours until a raft trip arrived that he could paddle alongside. “That’s why I know everyone in the industry,” he says. He eventually landed a job at a rafting company and started exploring rivers near and far from Kathmandu. By 17, he was tagging along with foreign kayakers on multiday trips. From the seat of his kayak, he discovered the colorful cultures and wild rivers of Nepal.

In the early 2000s, Nepal’s flourishing whitewater tourism industry began to falter. “Conflicts in Nepal decreased tourism numbers,” says Anup, who, at this point, had been working as a raft guide on the Trishuli River for four years. As tourism slumped, so did guiding jobs. “There were already many Nepalese working in Iceland, so in 2001, I applied for a job and moved there.” Ten years later, Anup started his own small rafting company, Viking Rafting.

Today, Iceland is Anup’s second home. He speaks basic Icelandic and runs his own small rafting company, Viking Rafting, which employs a small but tight group of guides. Anup spends time off in Iceland with his daughter, but he doesn’t neglect his first home and returns to Nepal at least once a year. “I was part of the rise of the whitewater industry in Nepal, I’ve seen the golden years, and I was part of the destruction,” he says. “And now it’s slowly coming back.” But with dam-related destruction happening on the rivers the rafting industry previously depended on, this comeback is diminished. “In 2011, I felt the need to give back to the community. So, I started the Nepal Kayak Club (NKC). I wanted to start making kayaking meaningful again.”

NKC is a whitewater paddling hub of sorts, encouraging and supporting paddling in Nepal on all fronts, from providing affordable gear to locals, organizing training and certification courses and kickstarting river conservation programs. They organize annual whitewater festivals and competitions and the website acts as an online forum for Nepali and international paddlers. NKC’s motto is Education, Empowerment, Encouragement and aims to make whitewater kayaking in Nepal accessible, safe, enjoyable and sustainable. 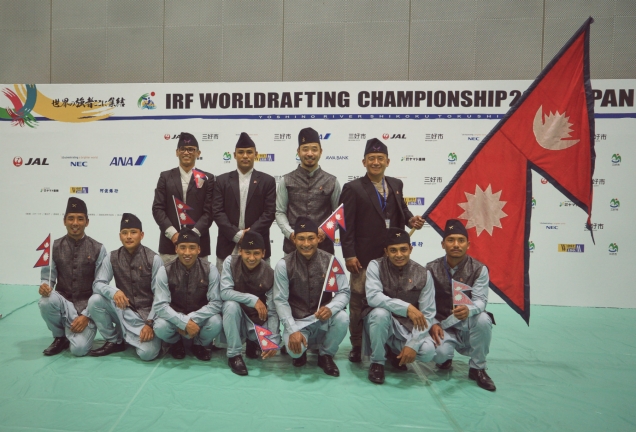 NKC represented Nepal as the National Team in Japan 2017. 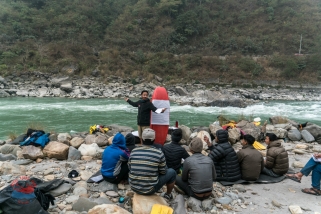 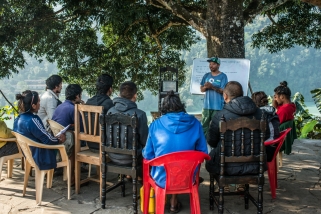 With the club in place, Anup recognized the sport’s dependence on wild rivers. But wild rivers in Nepal are becoming increasingly rare. Dams are destroying rivers like the Bhote Koshi, which was once known as the best single-day commercial run in the world. “The Bhote Koshi taught me to respect, to fight, to love. This is the river that gave me a lifetime of opportunity. But this mighty river has fallen into greedy hands,” says Anup in one of his short films. “Hydropower tunnels and sand extractions have diminished its powerful flow, and those living on its banks are losing their livelihoods and their health.”

It’s common knowledge that the Himalayas are the world’s highest and youngest mountains. They’re also some of the most active. Collisions between the Indian and Eurasian tectonic plates are so strong, India moves north a few inches annually. The construction of new dams and the seismic threats they cause, however, seem to be less well known.

Following the 7.9-magnitude earthquake in Nepal on April 25, 2015, the media focused on the death toll and destruction in the Kathmandu Valley. But few mentioned the Rasuwagadhi hydropower dam construction site, high in the mountains on Anup’s beloved Trishuli River, less than 90 miles northwest of the capital city. If the dam had sustained damage or failed, the catastrophe downstream and implications would have caused unthinkable damage and death.

Days after the quake, The New Yorker published an article citing the risks of building dams in earthquake zones and went into detail about the secondary risks of dams during earthquakes, including how earthquake-triggered landslides can block rivers or overflow dams. The article also explained the concept of “reservoir-induced seismicity,” the theory that the weight of water behind a dam can produce stress strong enough to worsen, or even trigger, an earthquake.

Other deadly earthquakes will almost certainly strike the region, which raises questions about why over 400 new dams are being built in one of the world’s most active earthquake zones. The multinational corporations including the dominating Chinese company, Three Gorges Corporation, have already started construction on many of Nepal’s most iconic rivers including the Seti, Karnali and Trishuli. All rivers Anup learned to kayak on. All rivers Mission East to West visited. And all rivers that his daughter will never be able to paddle. 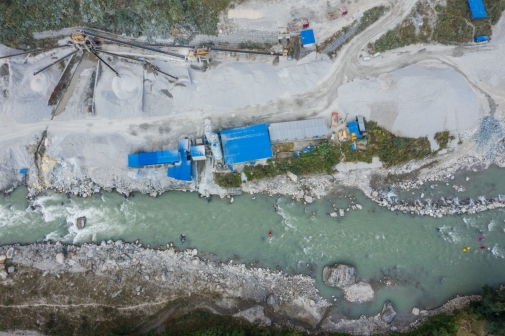 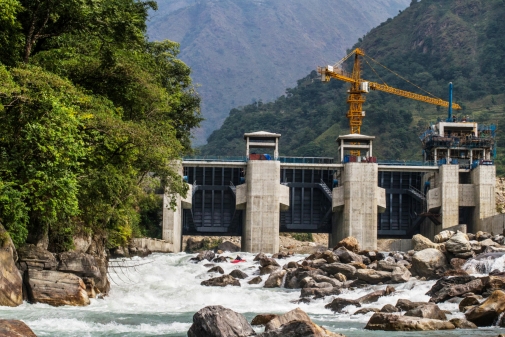 After seven months of planning and packing, mapping and scheduling, Anup and three other Nepali kayakers set off on the Bagmati River in eastern Nepal, marking the official start of Mission East to West. Anup’s objective was to share the destruction of Nepal’s rivers—to recount, firsthand, the dams and resource extraction of multinational corporations. Through Mission East to West he could combine his passion and skills—kayaking and storytelling—to support and defend the rivers and river-reliant communities. Anup doesn’t consider himself an activist or an environmentalist, but through the short films he produced along the expedition, he became the voice of Nepali rivers.

Over the course of five months, the team paddled the big-name rivers of Nepal including the Tambakoshi, Dudhkoshi, Mugu Karnali, Humla Karnali, Modi Khola, and Thuli Bheri. But the stats about the trip—how many rivers paddled, how many kilometers spent in a kayak—aren’t what’s important to Anup. It’s the stories that make up the currency of his trip. Additionally, Mission East to West connected multiple projects for Anup. “The whole team was once students of Nepal Kayak Club,” Anup states with a hint of pride. “This was why the club was created, to produce professional kayakers and professional guides. Previously, whitewater instruction was commercialized and meant to only feed into the rafting industry. But the club was meant to encourage expedition and exploration kayaking in Nepal.” 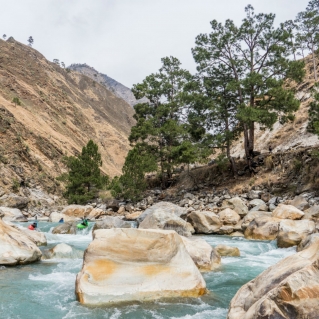 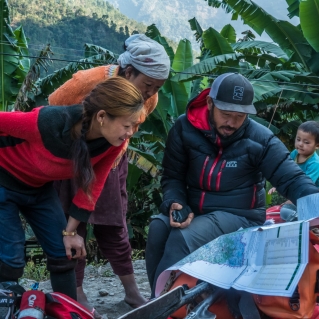 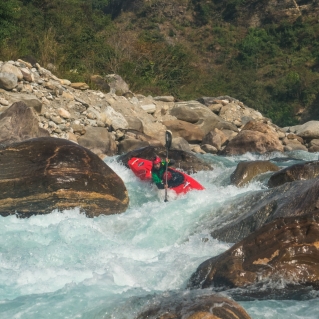 Six short films tell the detailed story of each segment of the journey, and act as a teaser for the documentary Anup plans to release in 2020. Exhibiting a deep respect for rivers became a common theme of Mission East to West, and Anup hopes this respect toward rivers becomes contagious for kayakers within Nepal and worldwide.

“We were paddling to enjoy what we have, what Mother Nature has given us. We were not doing it to be published or put our names down.” Haunting traditional music sets the scene for dramatic mountain peaks, ancient temples and horrifying destruction. Concrete-choked rivers and smog-filled cityscapes provide a harsh contrast to the images of clear whitewater. Sand patterns in a dry riverbed tell the story of whitewater now trapped within pipes. The films show the kayaking community there is more to Nepal, more to rivers in general, than just the cleanest line, or the biggest drop. There are people, stories, ecosystems, livelihoods and cultures attached to each fragile river.

The expedition was a constant learning experience, and so it was symbolic that it ended at the Nepal Rivers Summit. Anup was sure his crew should attend, but was unsure of what to expect. “The number of activists, scientists, politicians, environmentalists working to save Nepal’s rivers…this number shocked me,” he says. Motivated by the number of activists fighting for rivers of Nepal, Anup hopes the documentary will help feed energy and excitement for the battle to defend rivers.

On April 6, 2019, the crew paddled the last river of the expedition, the Upper Seti. There was no big media presence or crowd of people to greet them at the take out. The big celebration of this accomplishment will come with the release of the documentary. “There has been some interest from Nepali media, but I intentionally kept it low key,” says Anup. “The documentary we will create…this is what I want to travel Nepal with and share with media. I don’t want articles about how Anup and the gang went here and there. I want it to have more meaning. 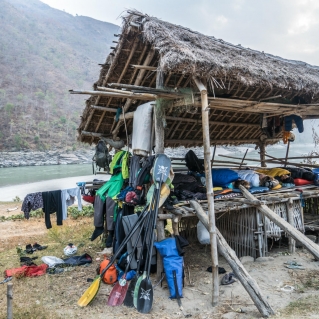 Camp on the Sun Koshi River. 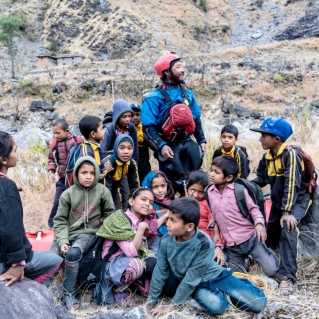 Anup with village kids near the Thuli Bheri River. 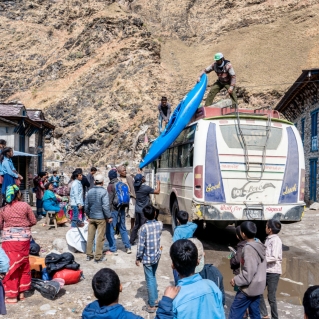 “As a ‘want-to-be activist,’ I have so many important messages to tell.” For now, the ideas simmer in his head as he reflects on the past year of adventures and experiences. “I need to take a step back, and I need some time to decide which story I will tell and how I will tell it.”

Mission East to West highlights the dramatic shift of kayaking in Nepal. Once a place of rivers for discovery is now a place in need of protection and preservation. “Mission East to West is not done for me,” says Anup. “For me, it’s just the beginning.”

Editor’s Note: All photos courtesy of Mission East to West unless otherwise credited. A shorter version of this profile was originally published in Kayak Session’s #72 Winter Issue. Read the previous River Warriors piece and learn about Marieke Vogt’s fight for rivers of the world.