I’ve been traveling to Chile’s beautiful rivers for work and play since 2005. For years I worked as a river guide in the tourist hub of Pucon. Then, in 2012, I began my own guide service in the nearby mountain village of Curarrehue, called by the pristine nature of its river valleys and by the deep roots of the native Mapuche culture.

After moving to Curarrehue, I soon familiarized myself with the ongoing struggle the local people are facing as foreign investors continue to target Curarrehue and the surrounding region for their natural resources. This area is threatened by dams, mines, deforestation—industrial invasion and environmental destruction in the name of economic progress. The world needs to know. Due to the mining industry’s growing need for energy, hydroelectric power production is a hot topic, and every last one of Chile’s many streams and rivers are at risk. Why should a small, rural community, so dependent on these free-flowing rivers, be sacrificed for the growth of a mostly foreign-run industry, which needs to bring the energy over 2000 km North? 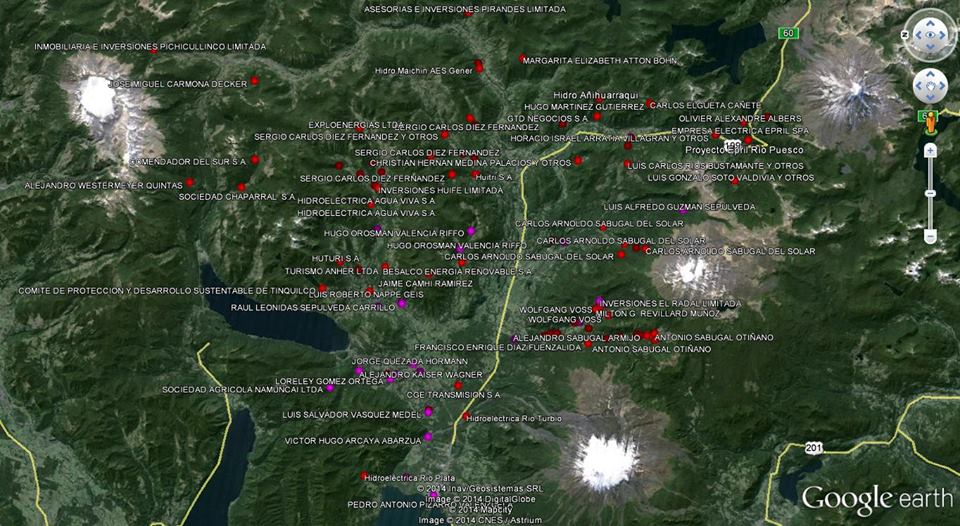 Each red dot shown on this map is a river whose rights have been sold to private parties for hydroelectric projects; the pink dots for fish farms, notorious for their negative environmental impact.  Map by Fede Medina

Andres Macias lives on a rural property with his mother, Rosa, and great-uncle on the banks of the Rio Panqui. The first approved hydroelectric project in Curarrehue, the planned construction of a 9-megawatt dam, hovers over the heads of his family and several Mapuche communities. Andres, in his mid-twenties, dreams of creating an eco-camp on his property, offering trails for trekkers, equipped rock faces for climbers, and access to the river for kayakers and fishermen, all of which will be affected by the installation of the proposed diversion hydro project. This project also includes the installation of high-tension power lines through his family’s property.

He and I used to joke about creating a reggae festival, “Curarreggae.” But as we learned more about what might happen to the rivers we adore and the communities dependant on them, our focus shifted from creating lighthearted memories to increasing concern for the social and environmental health of the region. What began as a shallow dream of throwing a musical bash in the countryside evolved into planning a massive festival designed to raise awareness and consciousness about the proposed grim future for the area’s free-flowing rivers. 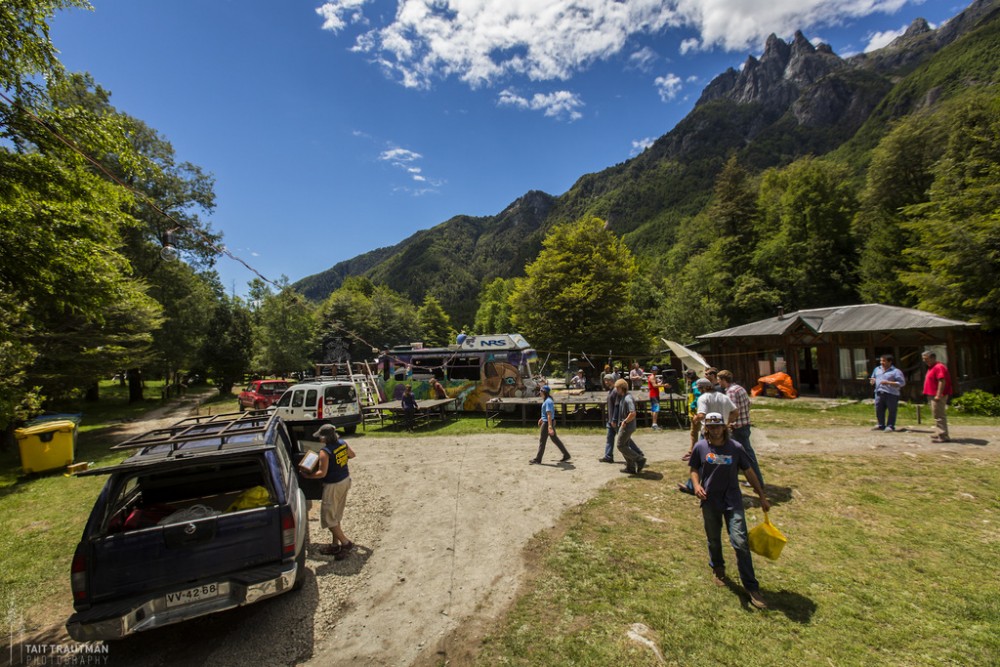 The dream of PuescoFest began  with a mug of tea by the fire with Rosa in April of 2014. We soon began to spread the word of our dream. At the time, few believed it would become more than a topic of conversation over mate or beers. Lorenzo Quintun, owner of the cabin and camping resort on the banks of the famous Puesco section of the Río Trankurra, offered to host the event. He was also concerned about the future of “his” river, proposed to be affected by a different hydro-project which, if completed, would take water from the three main tributaries of Trankurra’s headwaters, drying out the most famous rapid of the Puesco, “Tres Troncos.” Good friend, kayaker and activist Fede Medina began to take interest in the project as well. He was already invested in the protection of the rivers of South America, volunteering for activist groups both in his native Argentina and his new home in Chile. 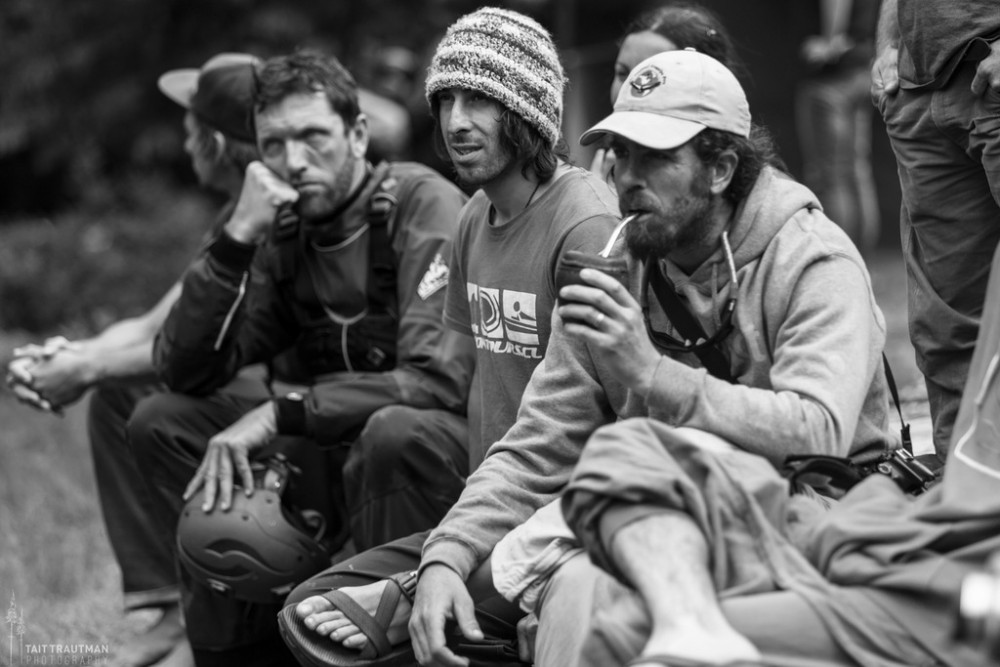 Andres, Fede, and I began to make a plan. Instead of a protest, we wanted to create a celebration of what this beautiful area and its rivers provide for everyone. We wanted to create a fusion of live music, kayaking, local culture and information about the damming projects. Our idea was to gather people of all cultures (indigenous, Chilean, foreign, kayakers and non-kayakers) to share the majestic splendor of the Puesco valley. We wanted people to feel free like the river—free to converse, free to float, free to make music and dance to it, free to fight for what they love. One of the best ways to educate and motivate people to act is to bring them together in the very place that needs their help. This way we can all feel the powerful energy of the river and the trees and the mountains, and we can take that sensation with us to bring a passionate message to the world, “Let the rivers run free.” 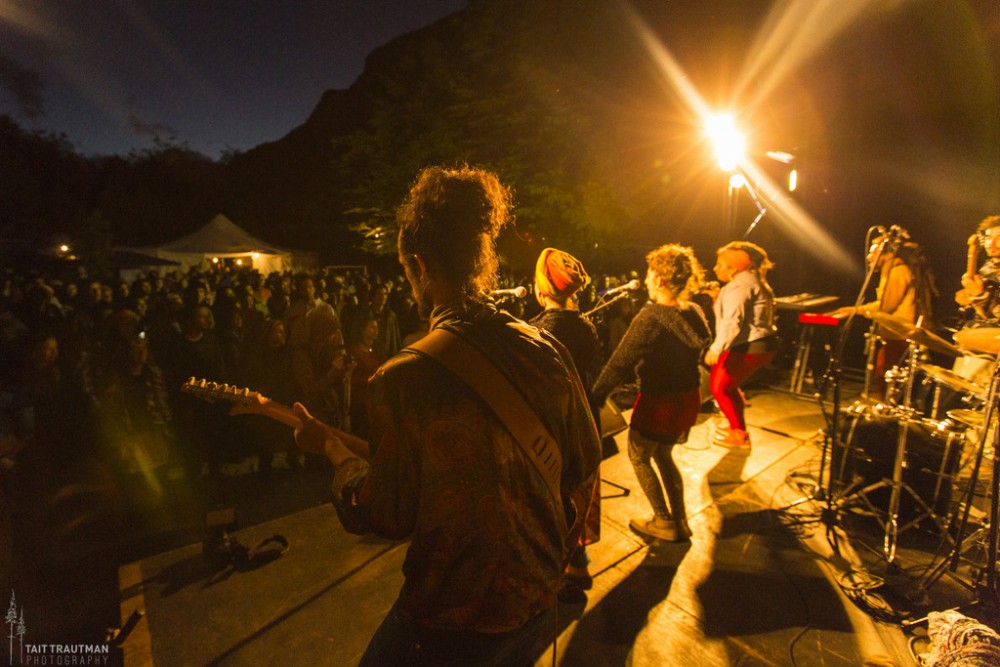 PuescoFest began to turn into something real when the up-and-coming Chilean reggae band, Aflora, agreed to play the festival. We were instantly absorbed by their sound and message, and they were inspired by the project. Once they decided to participate, we knew we had something others would want to support as well. 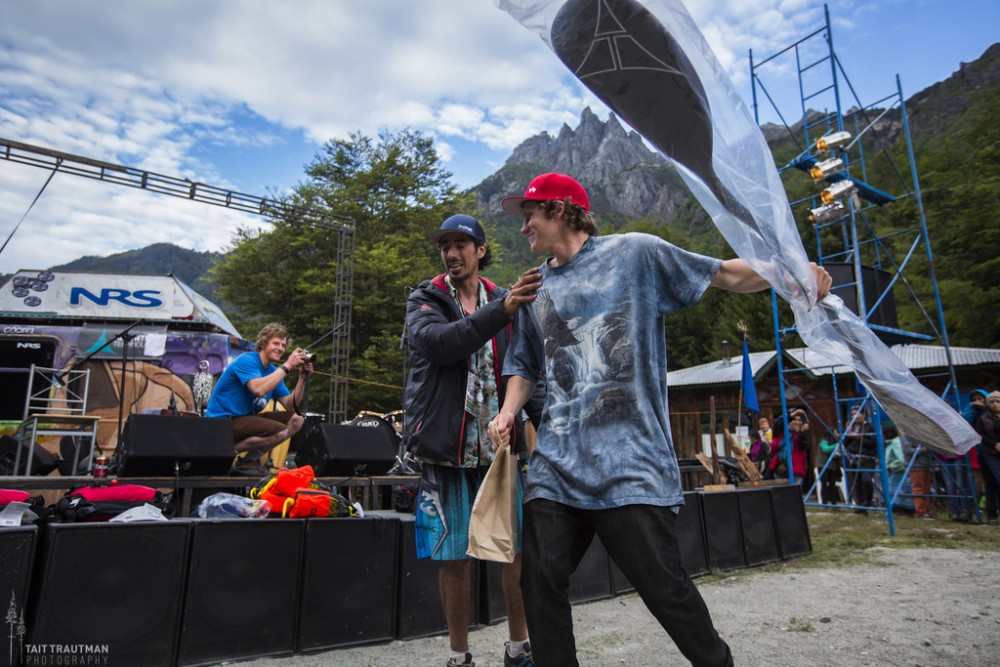 We chose to make the event free to the public. We wanted the message, the information and the celebration to be accessible to everyone. Although free to the public, the production obviously cost. We hit the ground running looking for financial support. The generous Garcia family at Rivers, Lakes & Oceans, the local kayak store in Pucon, was the first to offer their help. They then connected us with NRS, who gave us unconditional support from the start. Soon after, Adventure Technology Paddles signed on as well. Our vision hit mainstream recognition when Colombian artist, Silvia Cifuentes, hand-drew the event poster inspired by the landscape, local Mapuche art and the message of  PuescoFest. 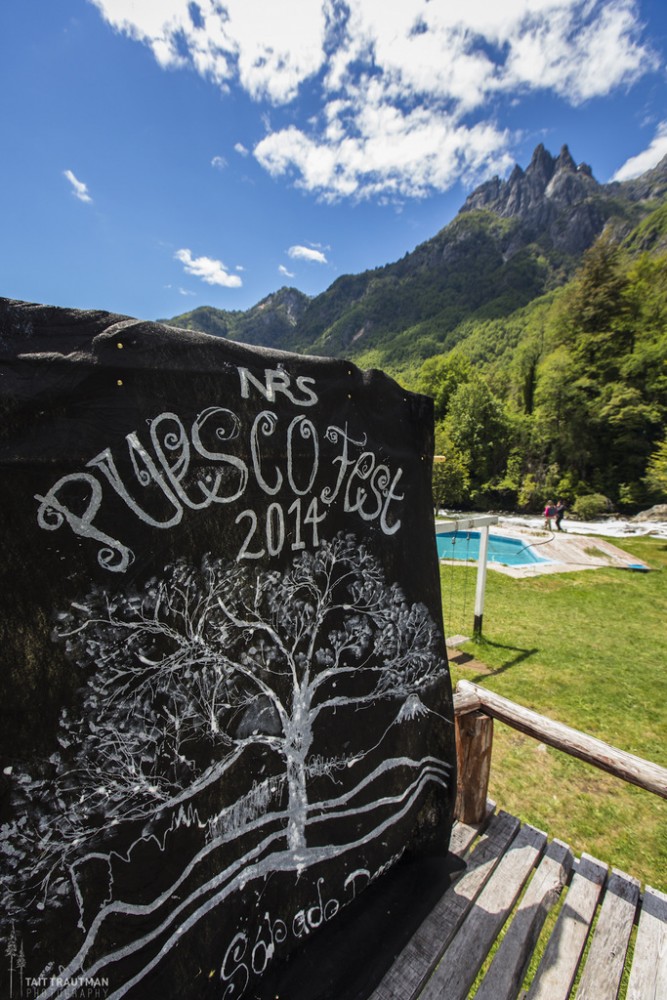 When I returned to Chile in September, after a short stint back home in White Salmon, WA, local Chileans couldn’t believe individuals and companies from other countries would be so supportive to save their rivers. This shows that when it comes to nature and community, there are no borders. The Municipality of Curarrehue offered to help with the stage, lighting and event tents. The well-established Feria Walung offered their organization’s tent as well. We began to piece together infrastructure, and as the dates of the festival edged closer, we were fortunate enough to receive private donations  along with sponsorships and support  from area businesses. More bands, artists, cooks and artisans were daily calling to participate. The community of volunteers grew as well, and our team of three grew to four with the addition of Norwegian transplant Gunvor Sorli. We had a solid web of organized people taking charge of tasks to create an impactful event in Puesco. 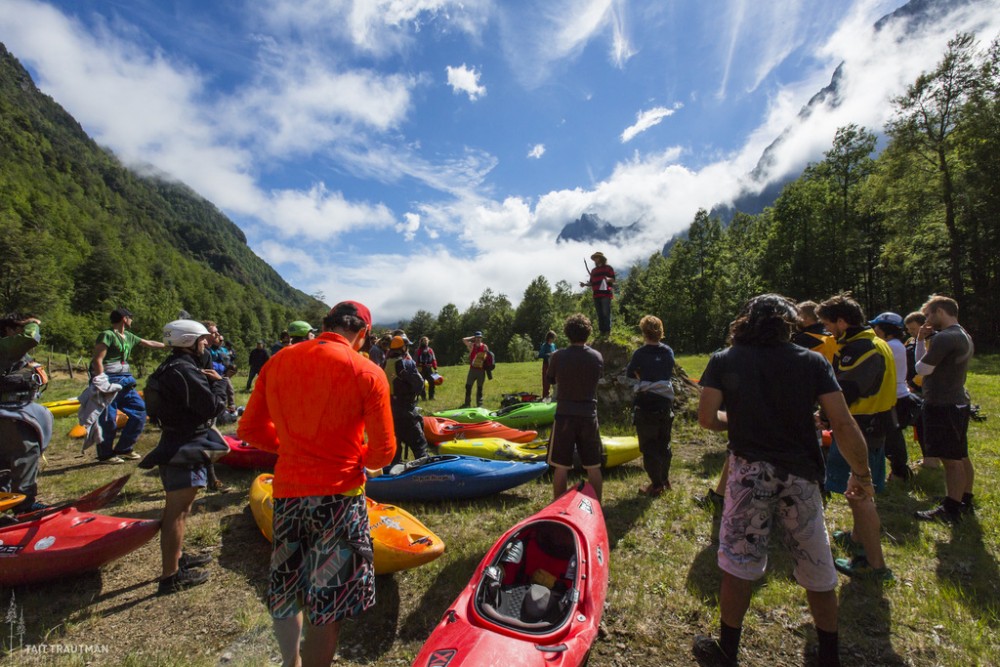 The first of what we hope to be an annual PuescoFest blew us all away. Before we knew it, cars were lined up on both sides of the highway as far as the eye could see and people were spilling into the entrance. Kids ran freely, kayakers lapped the powerful rapids of the Puesco, stellar Spanish-infused reggae boomed through the valley, and smiles were endless. Actually, the smiles were counted—750 registered guests, plus an estimated 300-400 more walk-ups. 34 kayakers from 11 different countries participated in the extreme slalom race on the Class V “Tres Troncos.” It was incredible. No one imagined over 1,000 people would gather in such a remote place, but it happened. People gathered there because they believe we need to save and protect these communities of people and their free-flowing rivers. 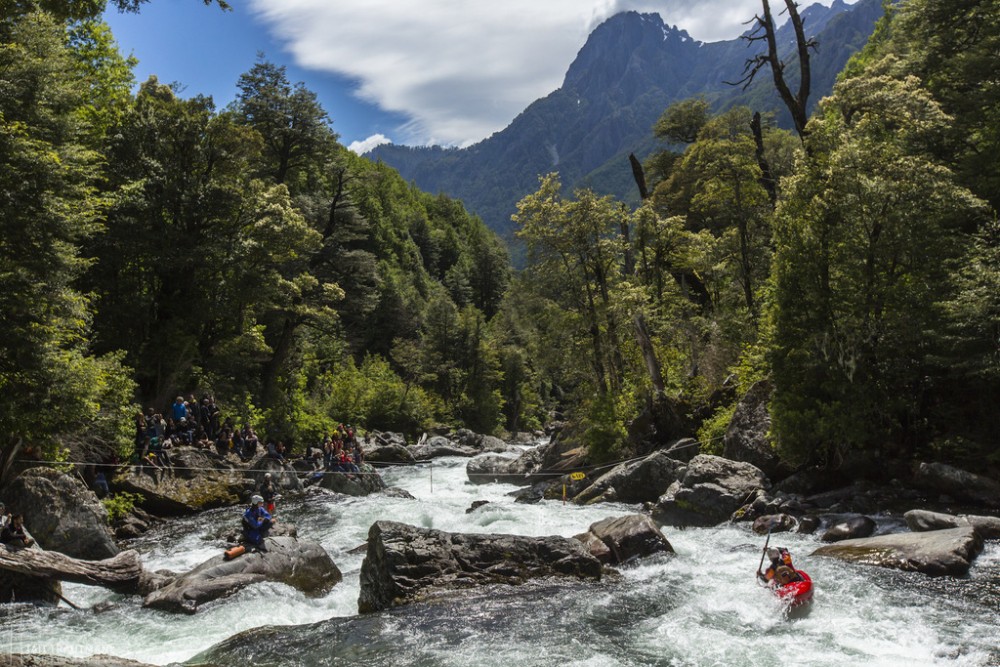 On Saturday of the event, just after the expert kayak competition, local Mapuche leader and activist, Don Silverio Loncopan, called to the masses of people to act, to help stop the wealthy companies from destroying what he and his family believe to be sacred. At that very moment, a pair of mighty Andean condors, a symbol of the power of the Andes, soared overhead, much closer to the ground than their typical high-altitude flight pattern. We were living in a fairytale. The power and significance of the gathering was palpable. The Puesco Valley in its natural state was magic to our eyes. 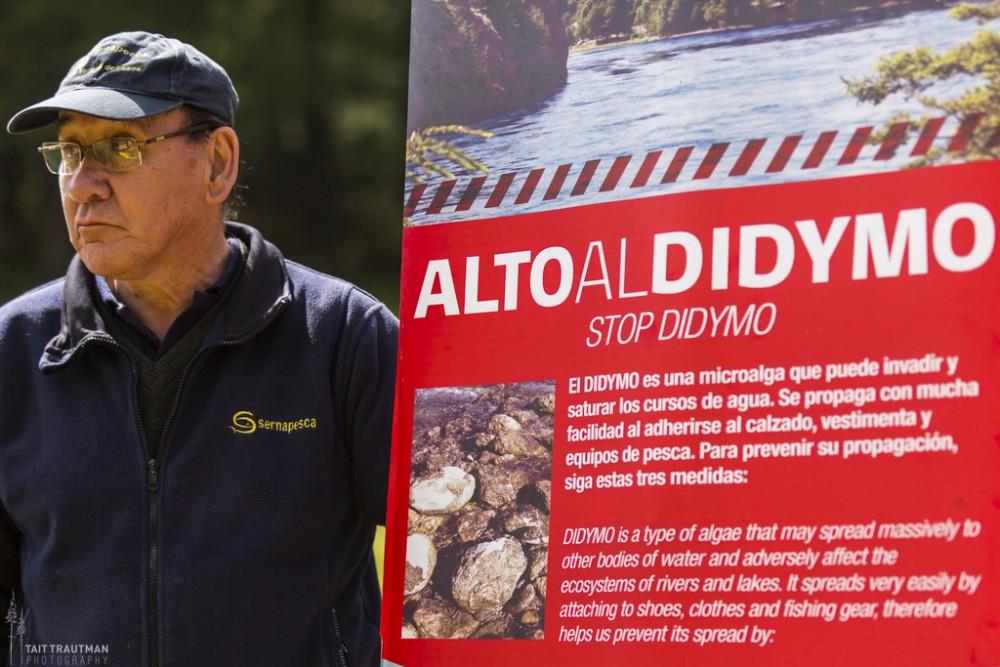 Both Friday and Saturday celebrations lasted until sunrise. An epic rainstorm followed the final sunrise on Sunday morning, which was both cleansing and shocking to the mass of campers. Most  packed up early in search of shelter and warmth, but there was a group of dedicated volunteers organized by the Fundacion Condor Blanco who stayed in the rain to help collect and sort the trash and recycling. After three days and over 1,000 participants, we finished the festival with only seven bags of un-recyclable trash. 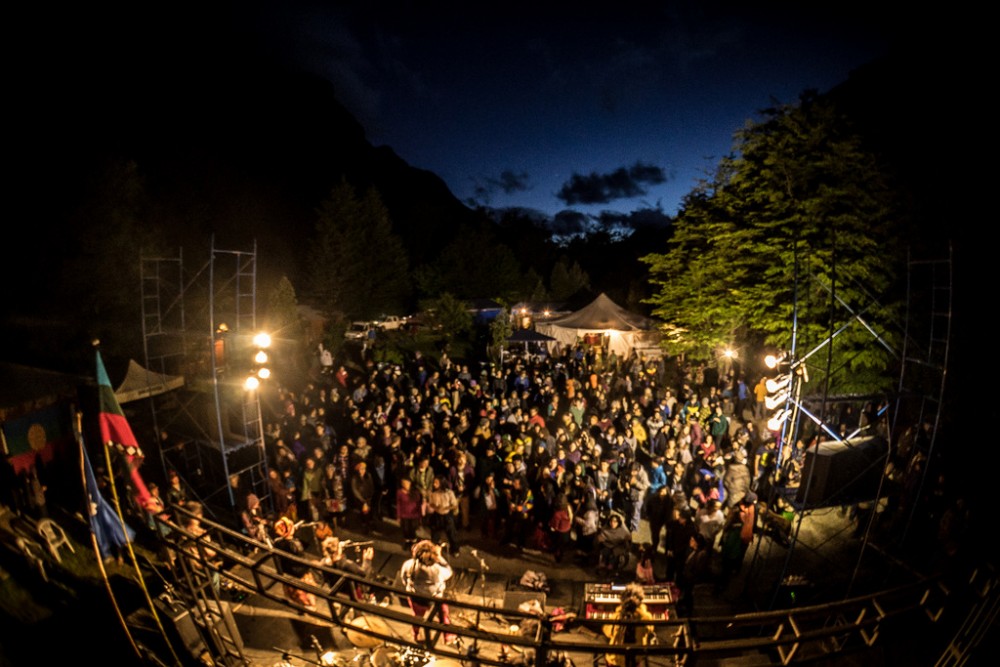 Despite the support of the local and global community fighting for the protection of these special rivers through festivals, protests and legal action, the Chilean government continues to invite the development of both small and large hydroelectric projects in order to feed the greedy desires of the mining industry. Unfortunately, the current system facilitates corrupt and unethical actions by companies invested in the development of these projects. Even before impacting the environment, some companies impact the local communities by bribing people with few economic resources for their supporting signatures. They show these misleading signatures to the Chilean government hoping to prove native compliance. This forces families to put their values at odds, and the decision to receive or deny the money often leads to conflict between neighbors and relatives. In addition to the physical threat they pose to the valleys, hydroelectric project proposals leave once unified communities, like Curarrehue, divided.  Once these proposals become realized projects, they do little to benefit the local people. Instead, they only  line the pocketbooks of investors and support the commercial interests hungry for hydroelectric power. 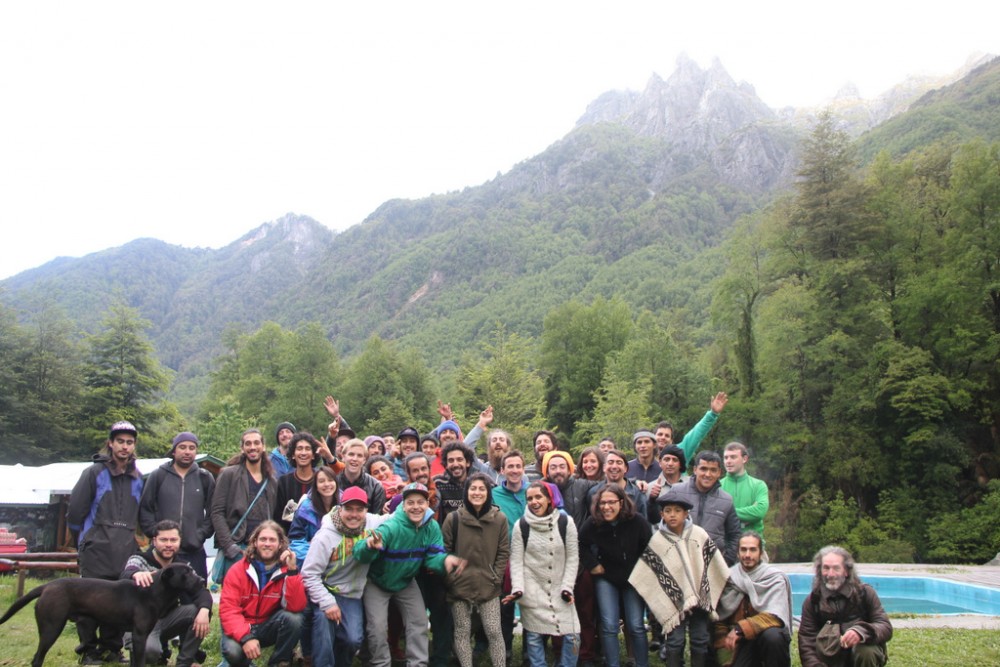 Until there is a systematic change in the control of water rights and the distribution of the power produced by these hydro projects, the fight for free-flowing rivers in Chile will be a constant, uphill battle. For now, we must continue to support those who defend and celebrate the culture and the rivers we love.

Many thanks to Tait Trautman and Eric Parker for the beatiful images. To see more of their PuescoFest Images, check out the gallery below.